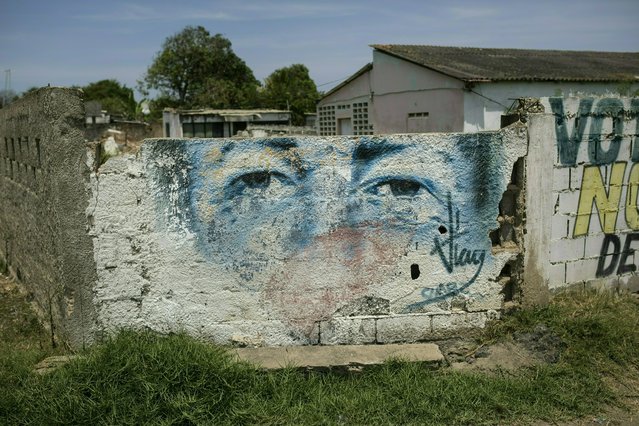 An eroded mural of Venezuela's late President Hugo Chavez covers a wall in Machurucuto, Venezuela, Sunday, May 5, 2019. For many town residents, their only contact with the Cubans is at a hospital in a nearby city where Cuban doctors treat them for free, albeit with alarmingly scant medical supplies. (Photo by Rodrigo Abd/AP Photo) 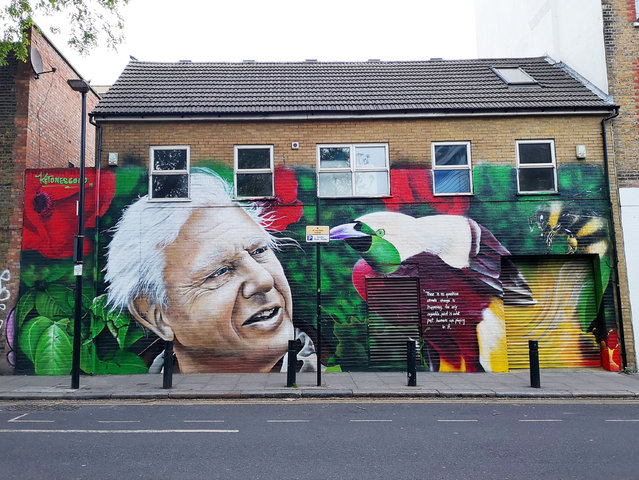 David Attenborough mural painted on a house in St Matthew's Row, east London, England by artist Jerome on May 7, 2019. It reads “There is no question climate change is happening. The only arguable point is what part humans are playing in it”. (Photo by Charlotte Elsom/Shutterstock) 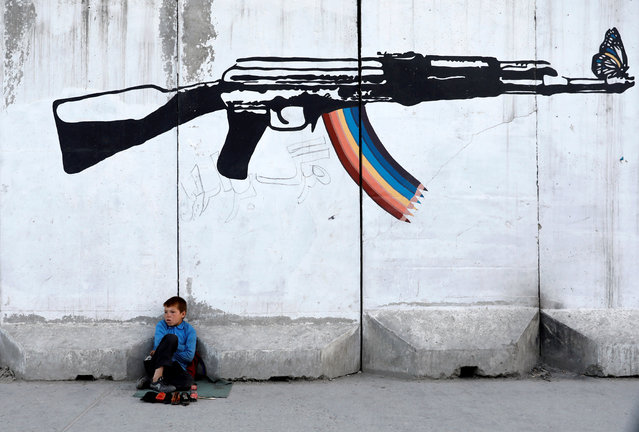 A shoe polisher waits for customers under graffiti on a wall in Kabul, Afghanistan on June 13, 2019. (Photo by Mohammad Ismail/Reuters) 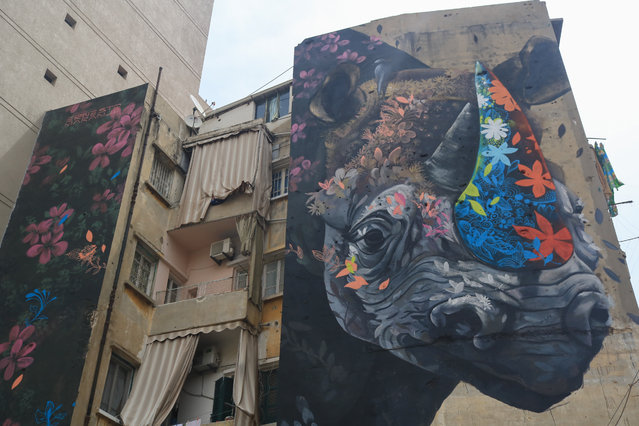 A mural of a rhinoceros adorns a building damaged during the Lebanese civil war in Beirut, Lebanon on April 24, 2019. (Photo by Amer Ghazzal/Barcroft Images) 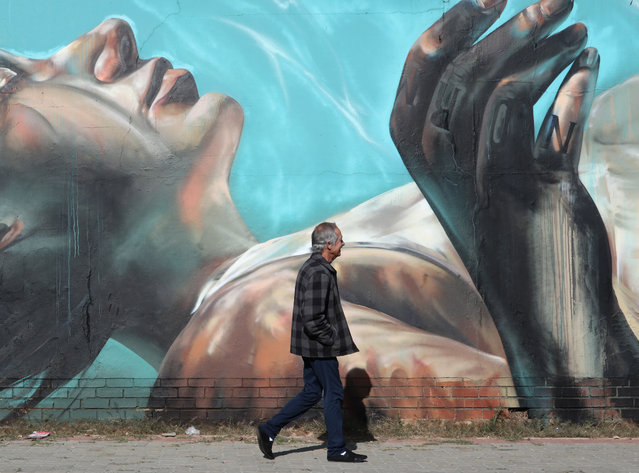 A man walks past an artwork by German artist Norm Abartig (@norm_abartig) and South African artist Nicholas Kerr aka Dekor One (@dekor) as part of the Westdene Graffiti Project in downtown Johannesburg, South Africa, 31 May 2019. The Westdene Graffiti Project has helped raise awareness of the art form of graffiti in the area. The art form has flourished in the inner city as the area has decayed over the past decade. Various artists from both South Africa and the rest of the world have taken their spray cans to the huge walls in South Africa's biggest city. (Photo by Kim Ludbrook/EPA/EFE) 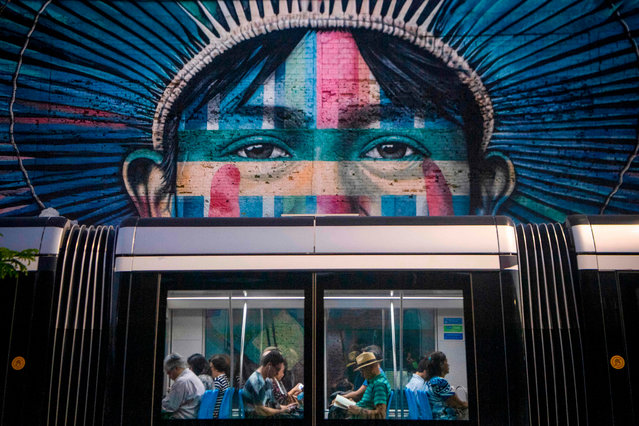 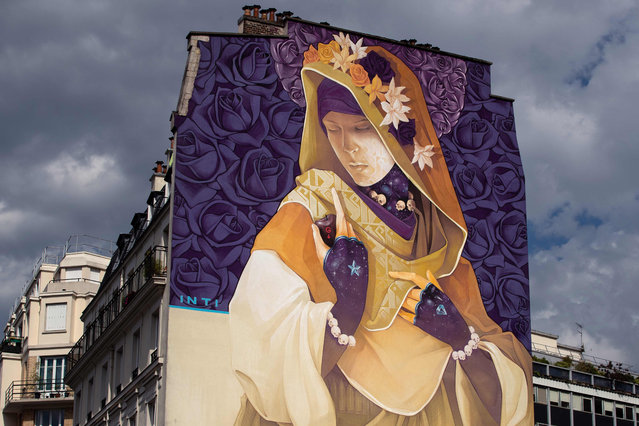 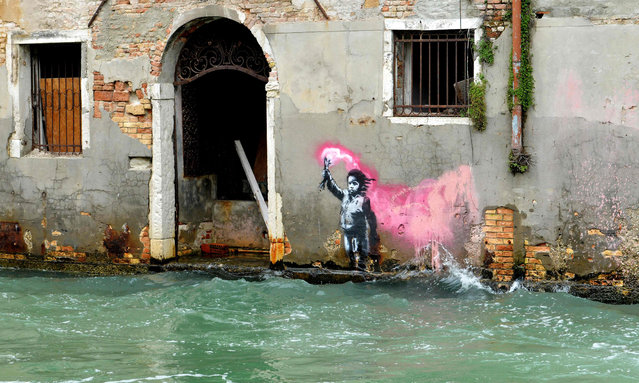 An alleged work by British street artist Banksy depicting a migrant child wearing a lifejacket holding a pink flare, is painted on the outer wall of a house overlooking the canal Rio de Ca Foscari, in Venice, on May 21, 2019. (Photo by Marco Sabadin/AFP Photo) 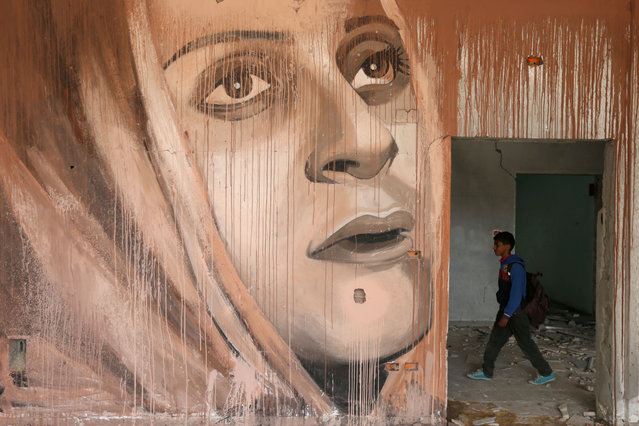 A schoolboy walks near a mural painted by Palestinian artist Ali Al-Jabali in the remains of a building destroyed in former Israeli air strikes, in Gaza City on April 25, 2019. (Photo by Ibraheem Abu Mustafa/Reuters) 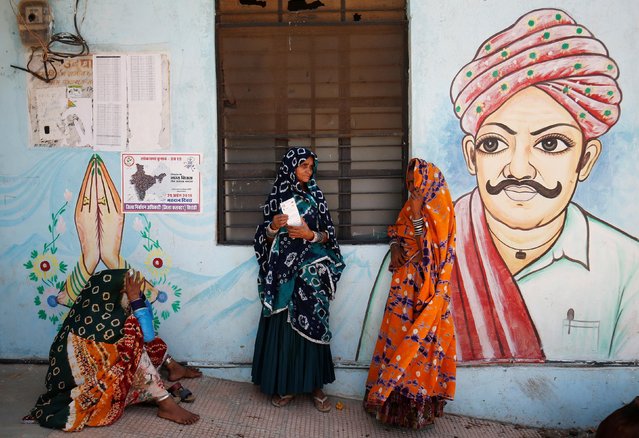 Women wait for a public transport outside a polling station after casting their votes at Sirohi district in the desert Indian state of Rajasthan, India April 29, 2019. (Photo by Amit Dave/Reuters) 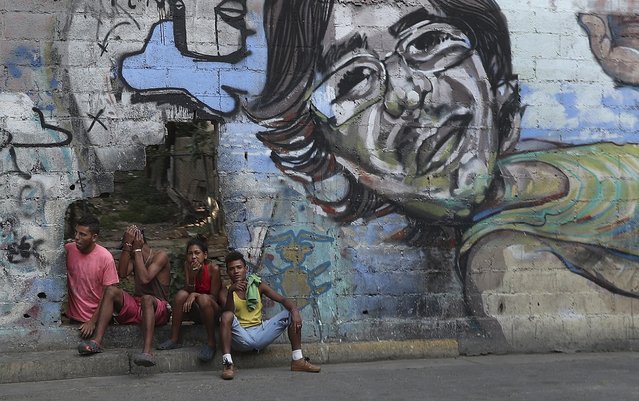 A group of young people rest in a hole in the wall at the Agua Salud neighborhood of Caracas, Venezuela, Wednesday, May 15, 2019. More than 3 million Venezuelans have left their homeland in recent years amid skyrocketing inflation and shortages of food and medicine. U.S. administration officials have warned that 2 million more are expected to flee by the end of the year if the crisis continues in the oil-rich nation. (Photo by Martin Mejia/AP Photo) 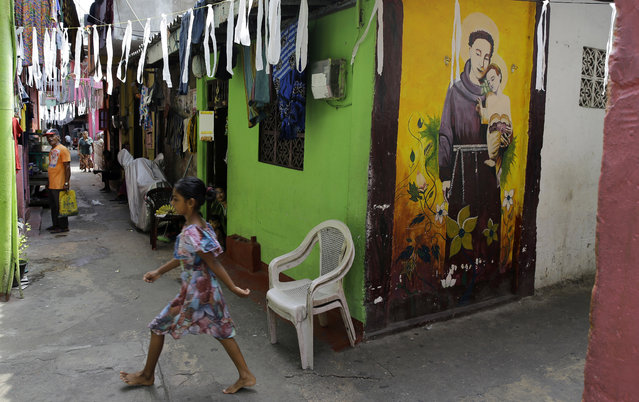 A Sri Lankan child walks past a graffiti of St. Anthony at a neighborhood near St. Anthony's Church, one of the sites of the Easter Sunday bombings, in Colombo, Sri Lanka, Thursday, April 25, 2019. Christians in Sri Lanka belong to both its main ethnic groups, and that rare inclusiveness of a small religious minority may explain the measured calm that’s been the response so far to the Easter attacks. But there’s widespread fear that more attacks could plunge Sri Lanka into the cycle of violence and retaliation that marked the bloody civil war that ended a decade ago. (Photo by Eranga Jayawardena/AP Photo) 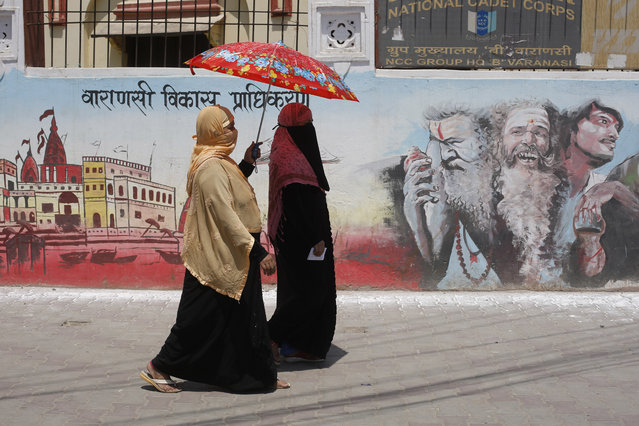 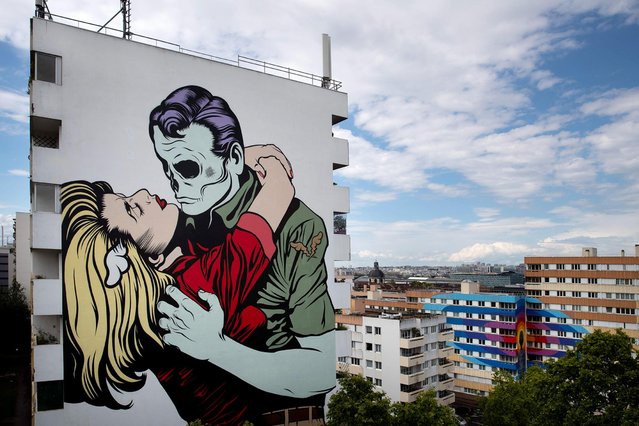 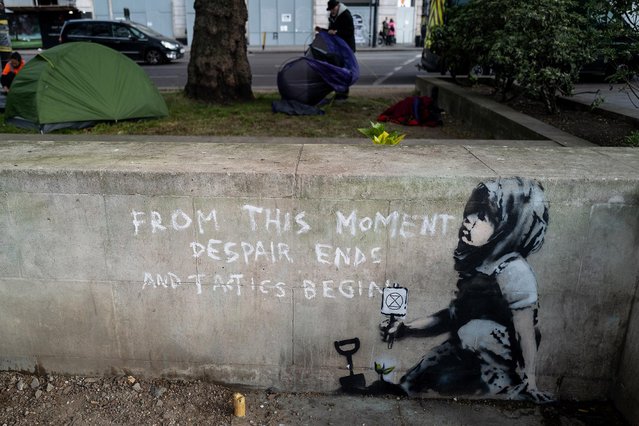 Environmental protestors pack away their tents behind a new piece of street art which is believed to be by the artist known as “Banksy” on April 26, 2019 in London, England. The artwork shows a child holding a small Extinction Rebellion sign crouching by a newly-planted seedling with the words “From This Moment Despair Ends And Tactics Begin” It appeared after the closing ceremony of the Extinction Rebellion, the climate change protest movement that has disrupted central London for the past two weeks. (Photo by Leon Neal/Getty Images) 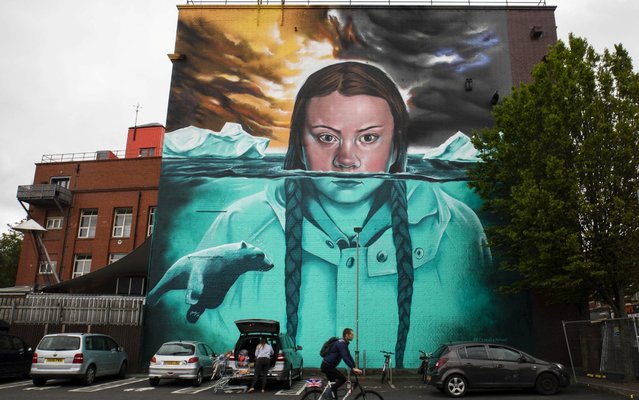 A 15 metre high mural of climate change activist Greta Thunberg created by artist Jody Thomas is seen in BristolEngland on May 31, 2019. Teenage Greta has gained a worldwide following for highlighing the emergency of climate change. (Photo by South West News Service) 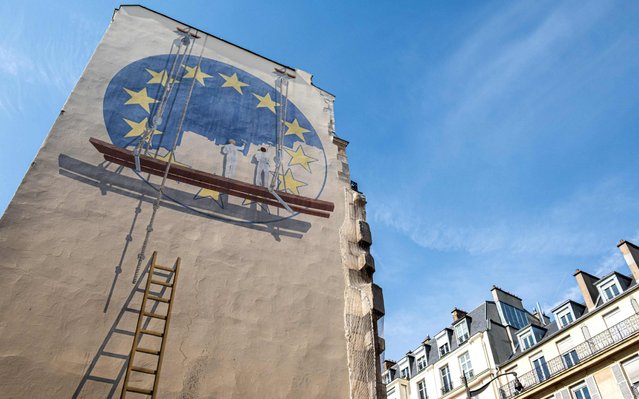 A trompe l'oeil shows two workers painting the European Union flag on the side of a building in the French capital Paris on May 23, 2019. Europe kicked off voting across the continent in a contest in which rising populist forces are hoping to make significant gains, threatening closer EU integration. (Photo by Joel Saget/AFP Photo) 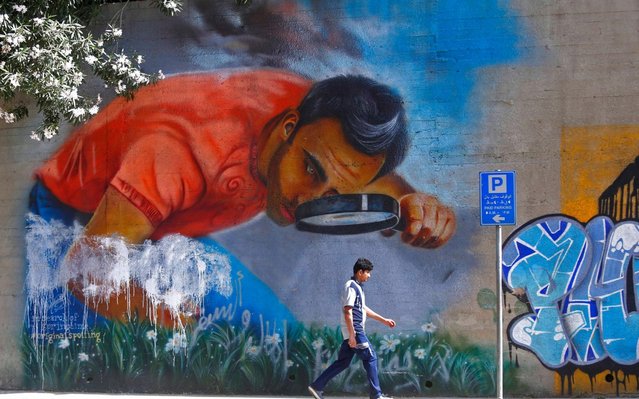 A man passes by a wall with graffiti in Beirut, Lebanon, on May 29, 2019. (Photo by Bilal Jawich/Xinhua News Agency/Alamy Live News) 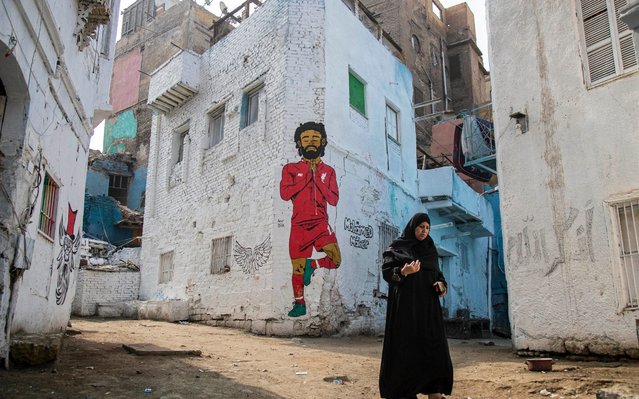