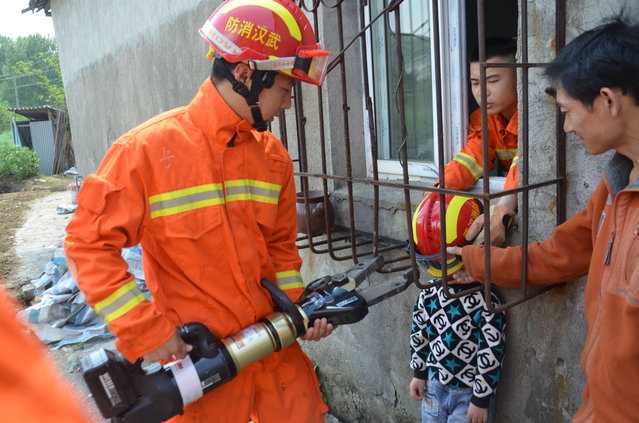 Firemen rescue a boy whose head is stuck between protective bars outside a window in Wuhan, Hubei Province, China, April 11, 2016. (Photo by Reuters/China Stringer Network) Rescuers look at a boat stuck in the arch of Sant'Angelo bridge on the Tiber river in downtown Rome December 12, 2008, after days of rain and thunderstorms. (Photo by Alessandro Bianchi/Reuters) 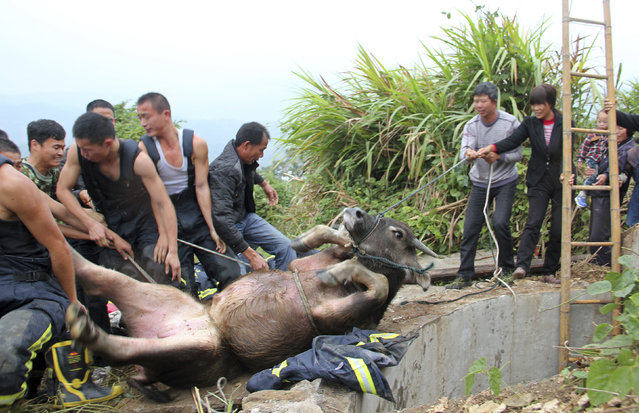 Firefighters and local farmers pull with ropes to rescue a buffalo that fell into a dried-up well in Cangnan county of Wenzhou, Jiangsu province, China, November 8, 2012. (Photo by Reuters/China Daily) 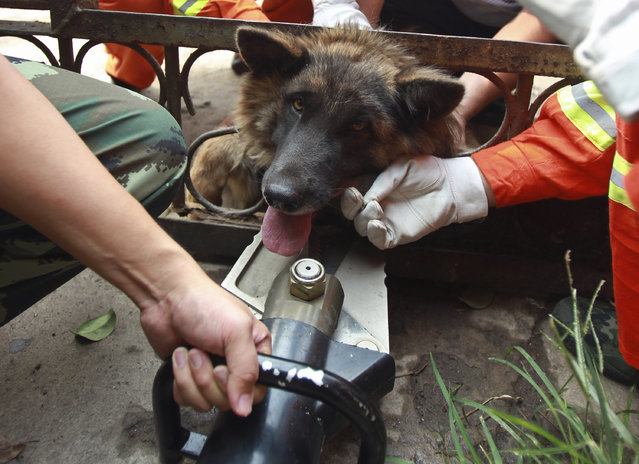 Firefighters use an expanding machine to rescue a dog, which got its head stuck in a fence, at Luoyang, Henan province, China, August 21, 2012. (Photo by Reuters/China Stringer Network) 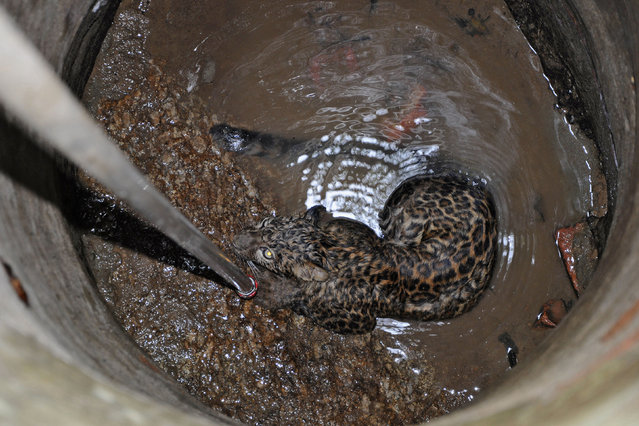 A three-year-old wild leopard is pictured inside a well at the Nilachal hill area of the northeastern Indian city of Guwahati April 4, 2013. The leopard was taken to the Assam state zoological park after it fell into a well in the city, forest officials said. (Photo by Utpal Baruah/Reuters) Firefighters pull a pig as they try to rescue it from a well at a pig farm in Huanghua township of Leqing, Zhejiang province, China, April 25, 2014. Seven local firefighters successfully rescued the 300 kg (661 lbs) pig, local media reported. (Photo by Reuters/China Daily) 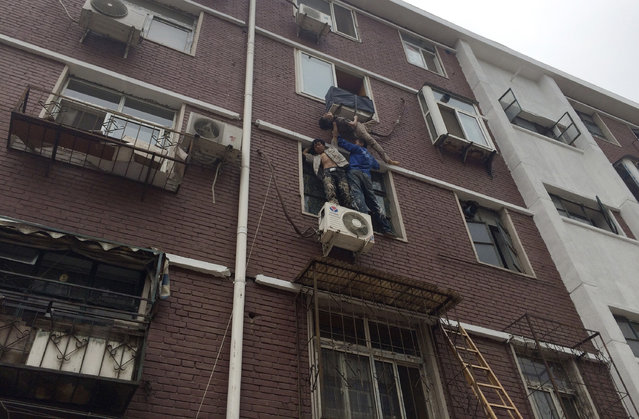 Liu Xinjun (L) and Jia Xiaoyu (R) hold a woman who fell out a window at her home in Tianjin, China, June 17, 2014. Liu and Jia held up an elderly who fell out her window and was stuck on a rack of an air-conditioner for five minutes, as another man Yang Ming held on to the woman with a rope from inside the room while waiting for firefighters to rescue. (Photo by Reuters/China Daily) 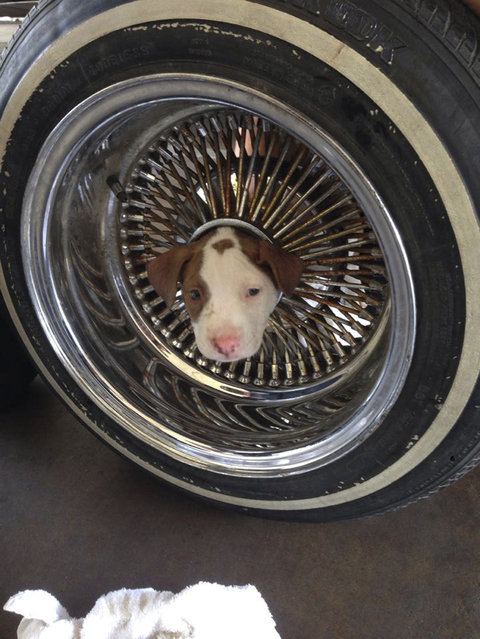 A puppy is shown with his head stuck in the middle of a car tire rim in East Bakerfield, California, June 20, 2014. The wheel and puppy were brought into the fire station by a local resident. Fire fighters used vegetable oil to free the puppy, who was otherwise unhurt. (Photo by James C. Dowell/Reuters/Kern County Fire Department) 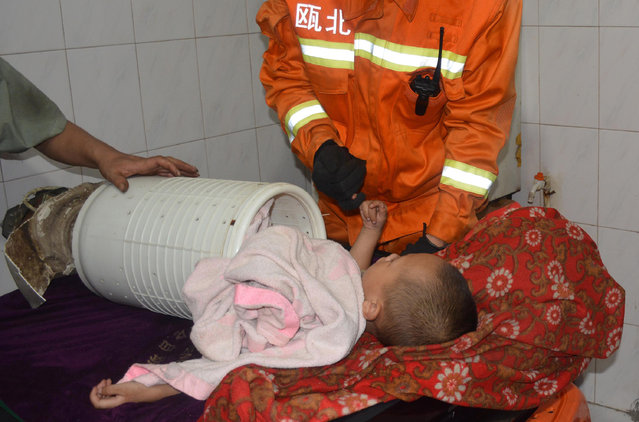 A three-year-old boy, stuck in the cylinder of a washing machine, hooks the pinky of a firefighter during a rescue operation in Yongjia county of Wenzhou, Zhejiang province, China July 10, 2014. Firefighters successfully rescued the boy, who got stuck while playing inside the washing machine, by tearing apart the machine and cutting the cylinder open, local media reported. The boy did not sustain any injuries, the report added. (Photo by Reuters/China Stringer Network) 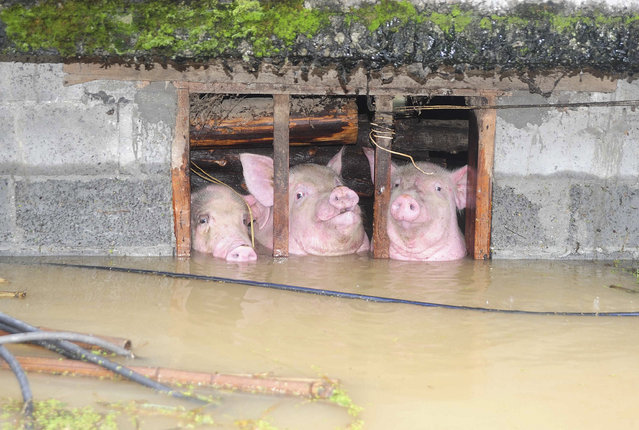 People look at a loaded truck that got stuck in a sinkhole on a road in Guilin, Guangxi Zhuang Autonomous Region, China, January 7, 2015. (Photo by Reuters/China Stringer Network) 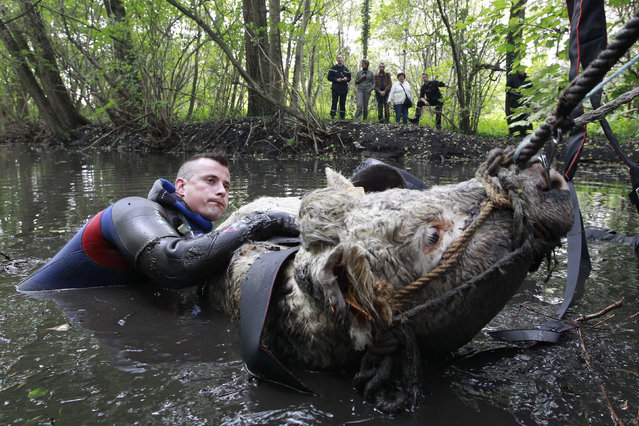 People watch as a diver with the French fire brigade rescues a cow that was trapped in a river after it slipped from its banks in Salome, northern France, October 10, 2011. (Photo by Pascal Rossignol/Reuters) 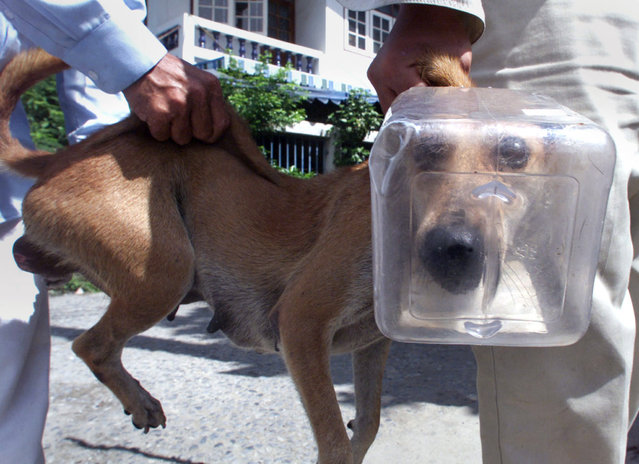 Thai veterinarians carry a stray dog with a plastic container stuck on its head in Bangkok, Thailand, November 7, 2001. (Photo by Sukree Sukplang/Reuters) 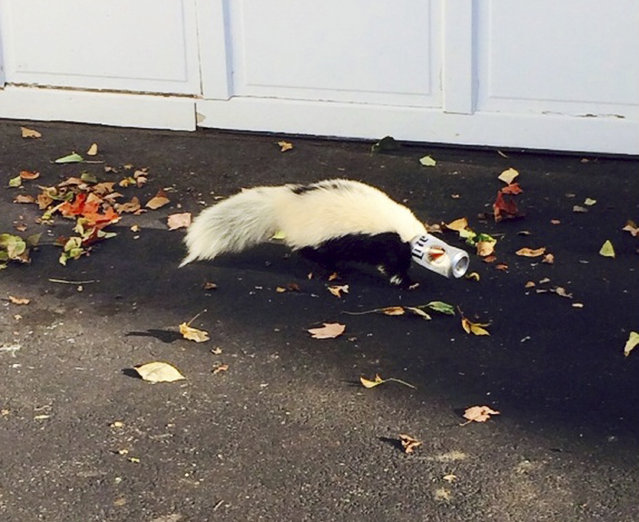 A skunk with a beer can stuck on its head is seen in Oxford, Ohio September 14, 2014. The skunk was found near a college fraternity house and an animal control officer was able to free the skunk without getting sprayed, according to Oxford police. (Photo by Matt Hatfield/Reuters/Oxford Police Department) 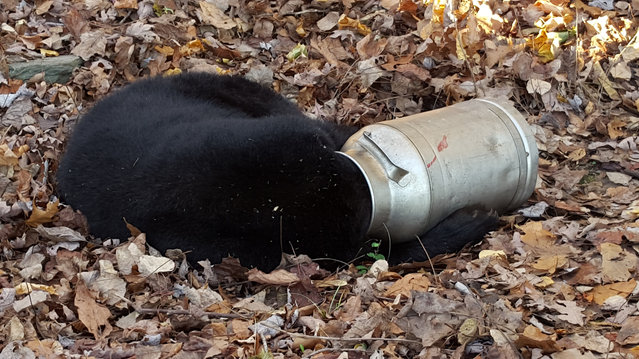 A black bear is pictured with its head stuck in a milk can near Thurmont, Maryland, November 16, 2015. Maryland Department of Natural Resource workers tranquilized the bear before using an electric handsaw to cut the milk can off. The bear recovered consciousness and walked off unharmed. (Photo by Maryland Wildlife and Heritage Service/Reuters)
Edit Del
25 Jan 2018 07:52:00, post received 0 comments
Publication archive:
←   →
Popular tags:
All tags
Last searches: