Fact Subways around the World 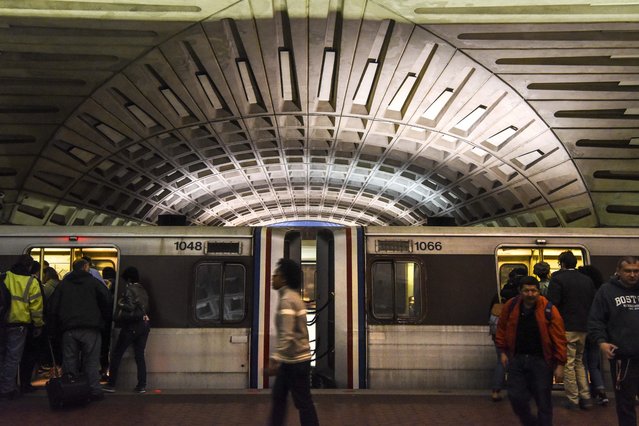 Metro passengers moved through the Metro Center station on March 30, 2016 in Washington DC. Metro's top officials warned that the transit system is in such need of repair that they might shut down entire rail lines for as long as six months for maintenance. (Photo by Michael Robinson Chavez/The Washington Post) 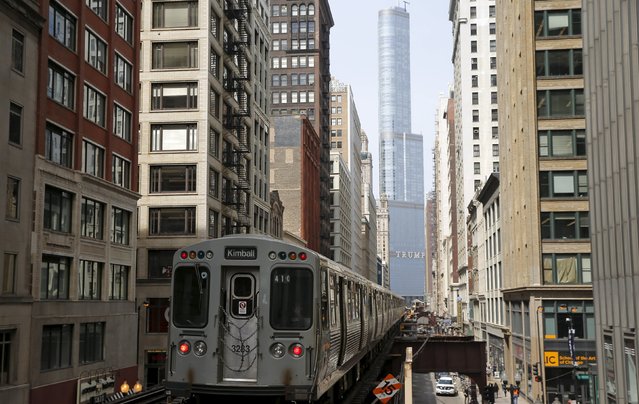 A subway car rides along the tracks towards The Trump International Hotel and Tower in downtown Chicago, Illinois, United States, April 18, 2016. (Photo by Jim Young/Reuters) 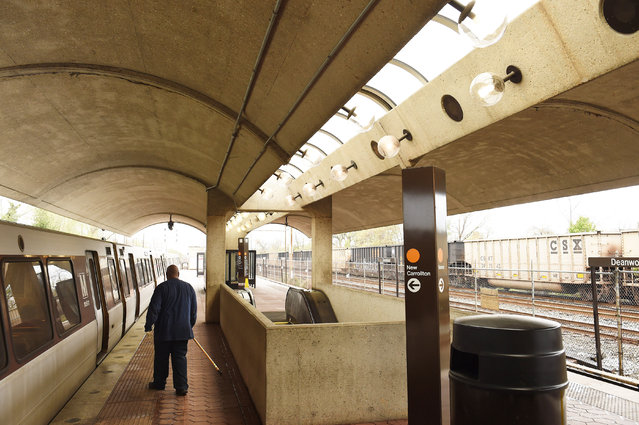 A worker is seen at the Deanwood Metro station on Tuesday April 12, 2016 in Washington, DC. A fatal stabbing took place at the station on Monday. (Photo by Matt McClain/ The Washington Post) 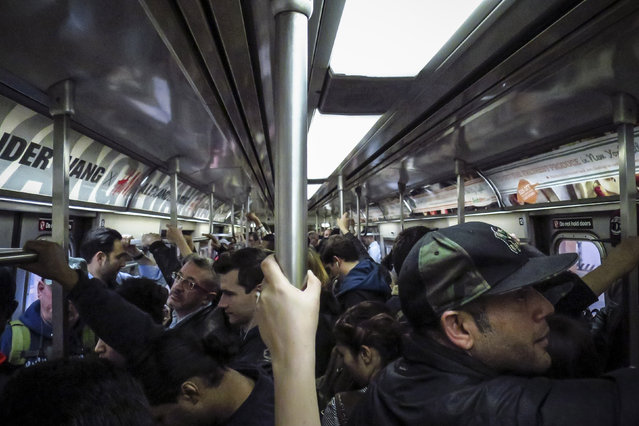 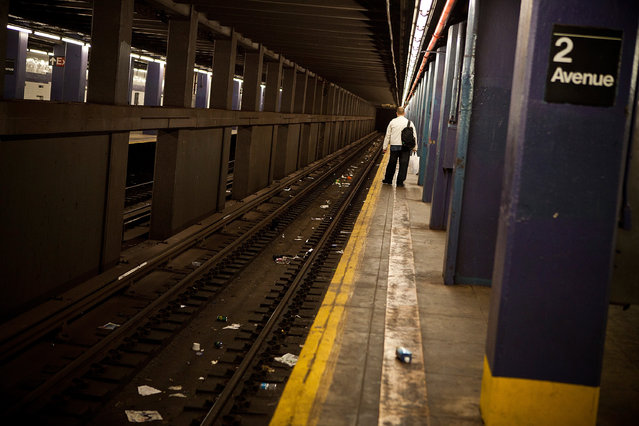 A man waits for the New York subway prior to the arrival of Hurricane Sandy on October 28, 2012 in New York, United States. New York plans on shutting down the entire public transmit system starting at 7PM, Sunday night. Sandy, which has already claimed over 50 lives in the Caribbean, is predicted to bring heavy winds and floodwaters as the mid-atlantic region prepares for the damage. (Photo by Andrew Burton/Getty Images) 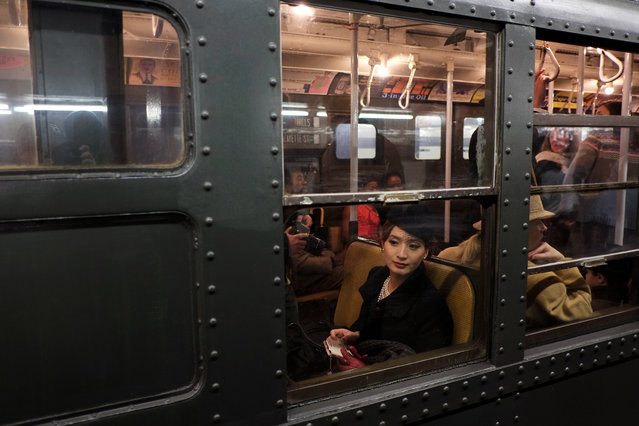 A woman dressed in period costume sits in a vintage New York City subway on December 16, 2012 in New York City. The New York Metropolitan Transportation Authority (MTA) runs vintage subway trains from the 1930's-1970's each Sunday along the M train route from Manhattan to Queens through the first of the year. (Photo by Preston Rescigno/Getty Images) 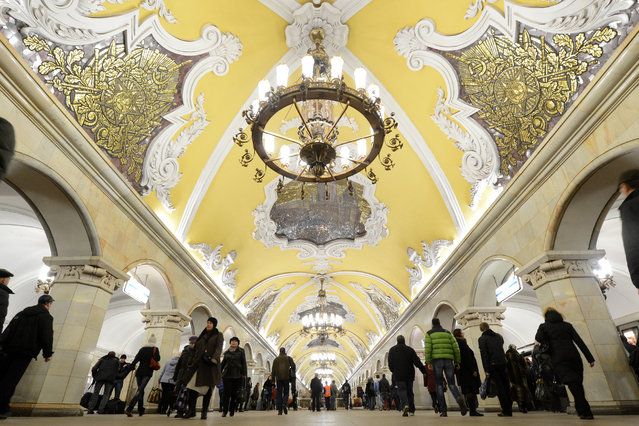 A general view of Komsomolskaya metro station of the Koltsevaya Line in Moscow subway, on November 2, 2012. The station was opened in 1952. (Photo by Kirill Kudryavtsev/AFP Photo) 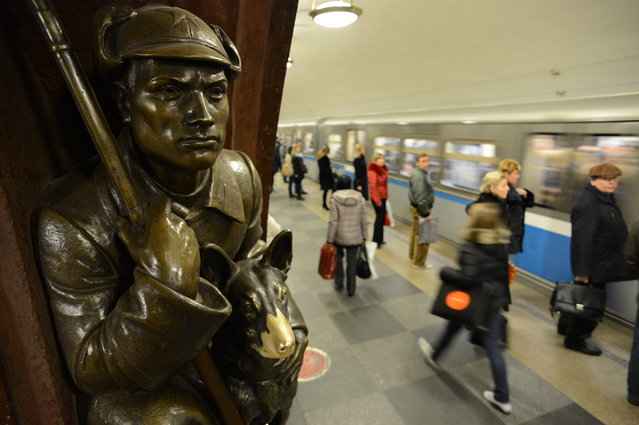 Subway passengers walk past bronze sculptures representing the Soviet people at the Ploshchad Revolyutsii metro station in Moscow, on November 14, 2012. The station was opened in 1938. (Photo by Kirill Kudryavtsev/AFP Photo) 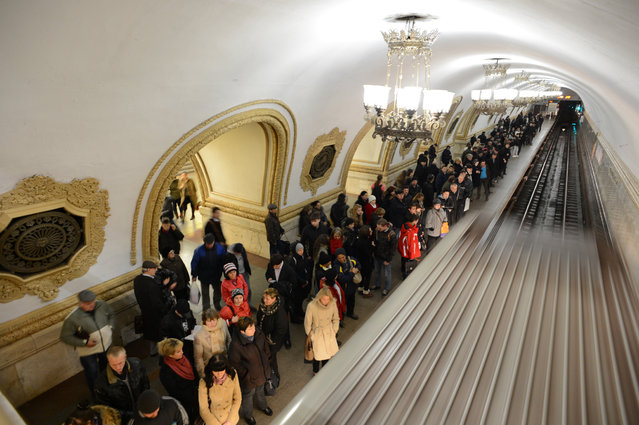 Subway passengers wait at the Kievskaya metro station of the Koltsevaya Line in Moscow, on November 14, 2012. (Photo by Kirill Kudryavtsev/AFP Photo) 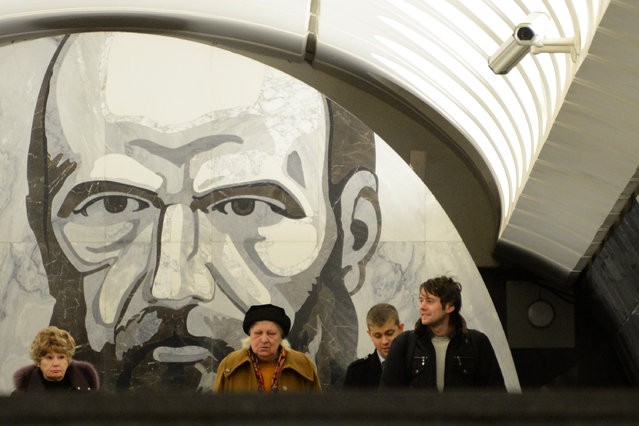 Subway passengers walk at the Dostoyevskaya metro station in Moscow, on November 15, 2012. A portrait of Fyodor Dostoyevsky, one of the highly regarded Russian writers, is seen in the background. (Photo by Kirill Kudryavtsev/AFP Photo) 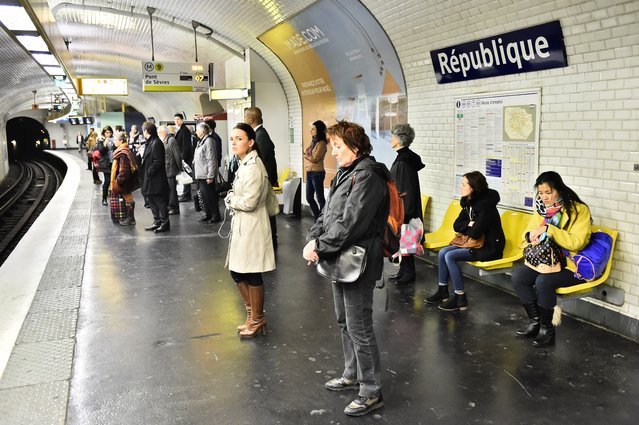 People observe a minute of silence, on November 16, 2015 at Republique subway station in Paris, to pay tribute to victims of the attacks claimed by Islamic State which killed at least 129 people and left more than 350 injured on November 13. France and other countries in Europe held a minute's silence in memory of the victims of the worst ever terror attacks on French soil. (Photo by Loic Venance/AFP Photo) 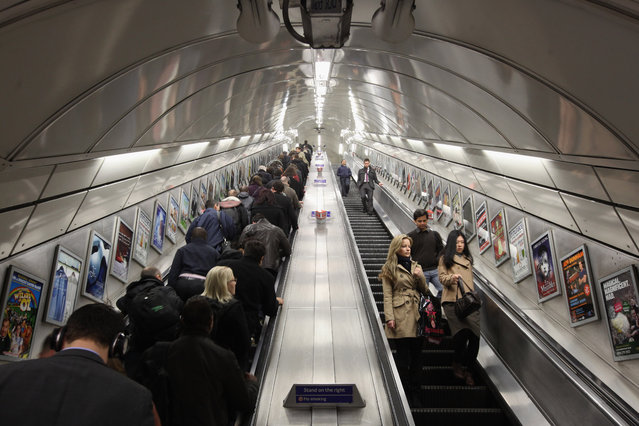 Commuters make their way on the escalator at Angel underground station on March 5, 2012 in London, England. The escalators at Angel tube station are the longest escalators on the tube network. London's underground rail system, commonly called the tube, is the oldest of its kind in the world dating back to 1890. It carries approximately a quarter of a million people around its network every day along its 249 miles of track and 270 stations. The network has undergone several years of upgrade work and refurbishment in preparation for the Olympic Games which take place this summer. During this time the tube is expected to carry millions of visitors to and from the Olympic Parks. (Photo by Dan Kitwood/Getty Images) 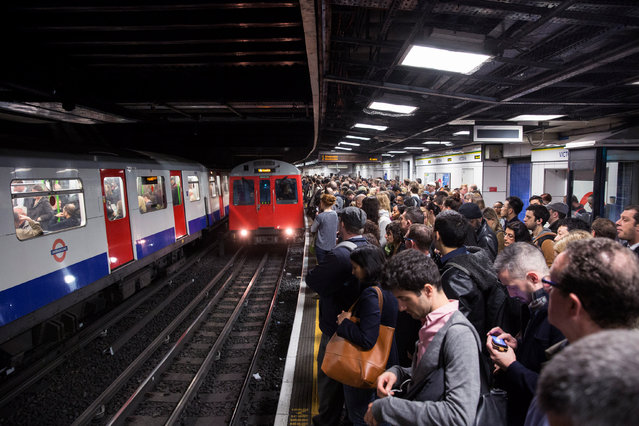 Commuters prepare to travel on the District Line of the London Underground which is running a limited service due to industrial action on April 30, 2014 in London, England. (Photo by Oli Scarff/Getty Images) 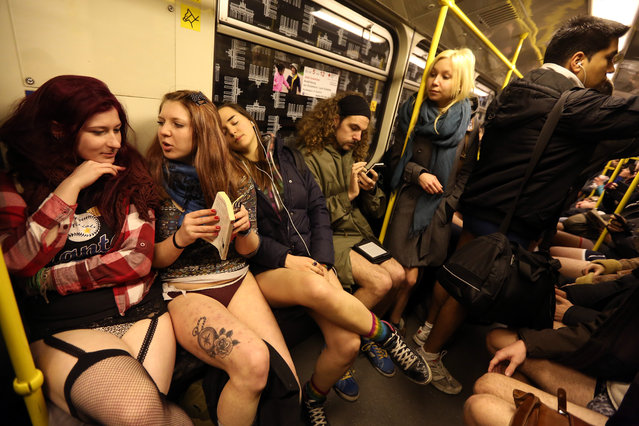 Participants of the No Pants Subway Ride ride a train on January 12, 2014 in Berlin, Germany. The annual event, in which participants board a subway car in January while not wearing any pants while behaving as though they do not know each other, began as a joke by the public prank group Improv Everywhere in New York City and has since spread around the world, with enthusiasts in around 60 cities and 29 countries across the globe, according to the organization's site. (Photo by Adam Berry/Getty Images) 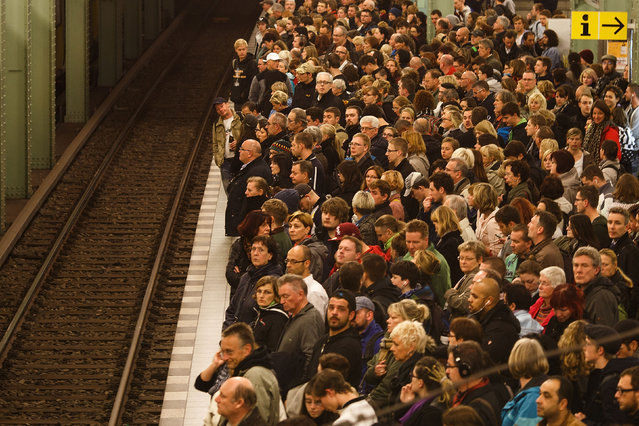 Passengers crowd the platform as they wait for the subway train retracted U5 line at the station Alexanderplatz during a four-day strike by the GDL train drivers labor union on November 6, 2014 in Berlin, Germany. (Photo by Carsten Koall/Getty Images) 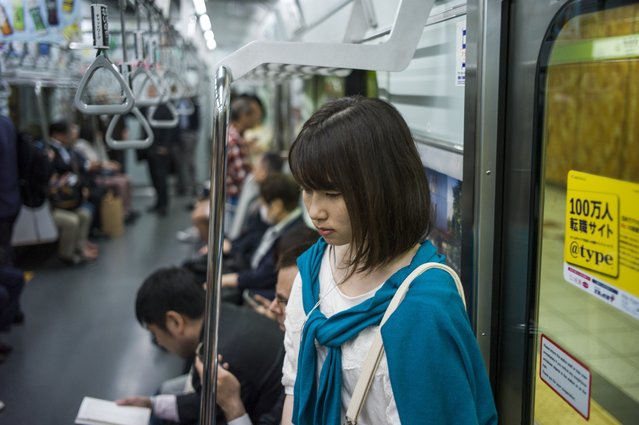 A commuter rides the subway at Shinjuku station in Tokyo on May 11, 2015. (Photo by Fred Dufour/AFP Photo) 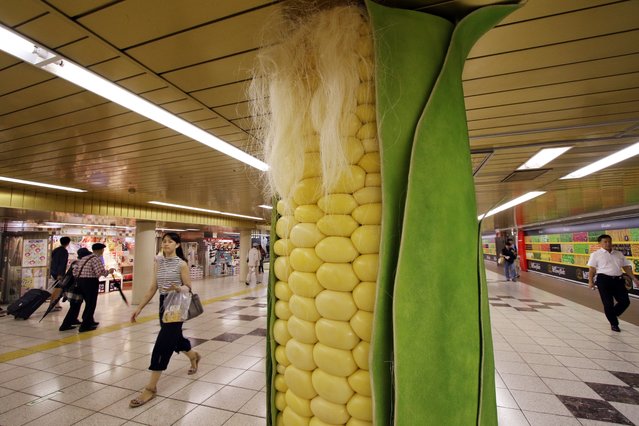 Pedestrians watch a large corn decoration cover at a underground passage of a subway station in Tokyo on September 2, 2015. Japan Agriculture Cooperative decorated the pillars of the underground passage with vegetable shaped covers such as radish, carrot, corn, cucumber, eggplant and sweet potato for the promotion of the domestically produced vegetables. (Photo by Yoshikazu Tsuno/AFP Photo) 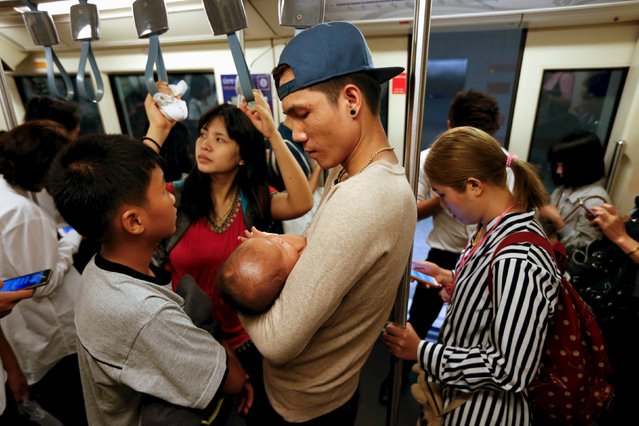 A man carries a baby while commuting on the subway in Bangkok, Thailand April 19, 2016. (Photo by Jorge Silva/Reuters) 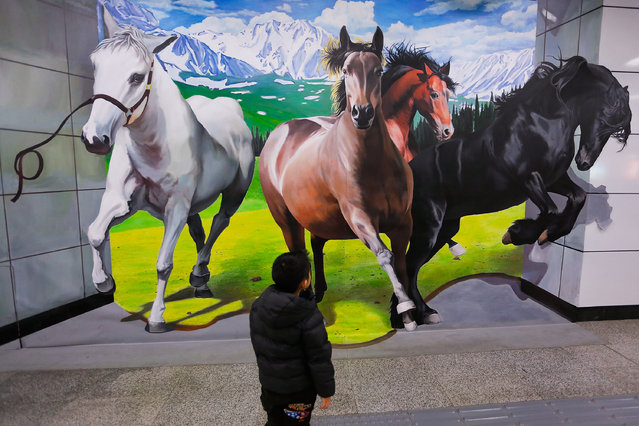 A child watching 3D horse painting is on display at a subway station on January 19, 2014 in Beijing, China. The Chinese Lunar New Year of horse also known as the Spring Festival, which is based on the Lunisolar Chinese calendar, is celebrated from the first day of the first month of the lunar year and ends with Lantern Festival on the Fifteenth day. (Photo by Lintao Zhang/Getty Images) 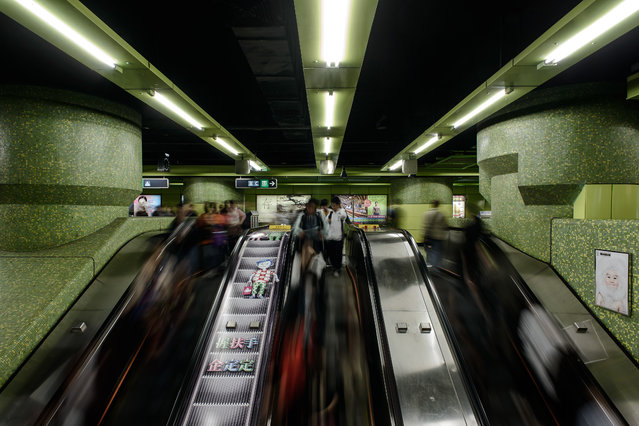 Commuters use escalators leading to a platform in a subway station in Hong Kong on February 26, 2014. Hong Kong is pondering whether to rip out some seats from overcrowded metro trains to give the city's smartphone-addicted population more room to interact with their devices. (Photo by Philippe Lopez/AFP Photo) 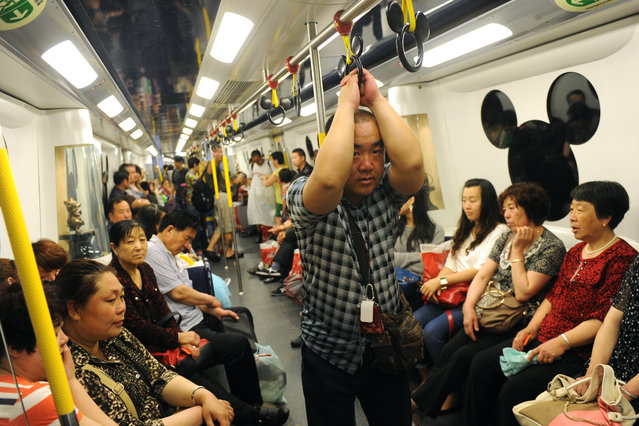 Mainland Chinese tourists ride on a uniquely designed subway train servicing Hong Kong's Disneyland on April 18, 2013. Hong Kong's once struggling Disneyland in February said it made a profit in 2012 for the first time since opening eight years ago, thanks to a surge in revenue as it welcomed a record number of visitors. (Photo by Aaron Tam/AFP Photo)
Edit Del
19 Apr 2016 13:51:00, post received 0 comments
Publication archive:
←   →
Popular tags:
All tags
Last searches: