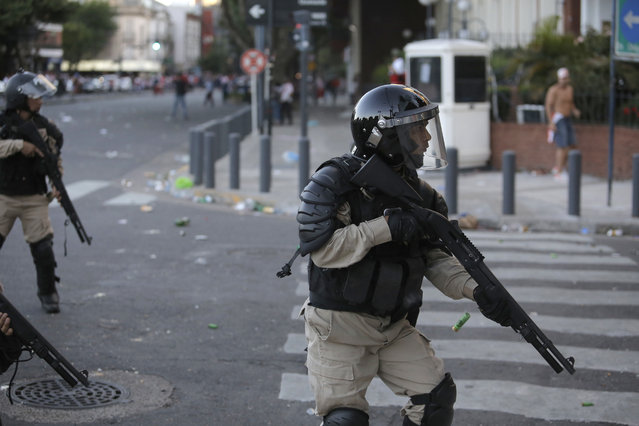 Riot police advance with their shotguns at the ready as they confront Argentina River Plate fans outside the Antonio Vespucio Liberti stadium prior the final soccer match of the Copa Libertadores between River Plate and Boca Juniors, in Buenos Aires, Argentina, Saturday, November 24, 2018. The match has been rescheduled after the bus carrying the Boca Juniors players was attacked by River Plate fans, injuring several players. The match will be played on Sunday. (Photo by Sebastian Pani/AP Photo) 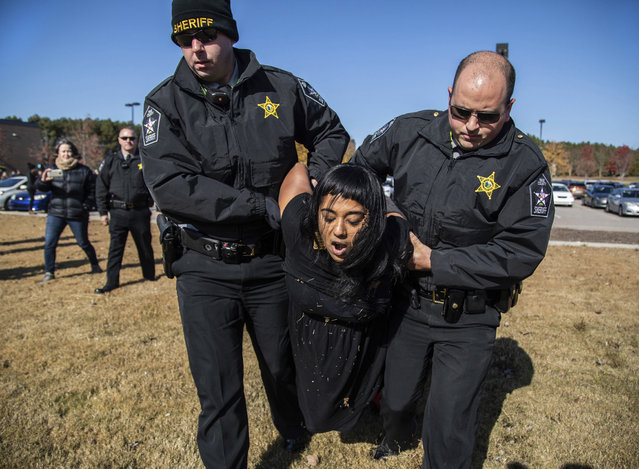 A demonstrator is arrested after Samuel Oliver-Bruno, 47, an undocumented Mexican national, was arrested after arriving at an appointment with immigration officials, in Morrisville, N.C., Friday, November 23, 2018. He had been living in CityWell United Methodist Church in Durham since late 2017 to avoid the reach of immigration officers, who generally avoid making arrests at churches. (Photo by Travis Long/The News & Observer via AP Photo) Police fire teargas and use water cannons to disperse the Sinhala extremist monks from Bodu Bala Sena (BBS) on November 19, 2018 in Colombo, Sri Lanka. The monks came to meet with Sri Lanka's president to hand over a message calling for the release of (BBS) General Secretary Ven. Galagoda Aththe Gnanasara Thera who was sentenced to six years in prison. Sri Lankas president later apologized for the severe treatment of the protesters. (Photo by Paula Bronstein/Getty Images) 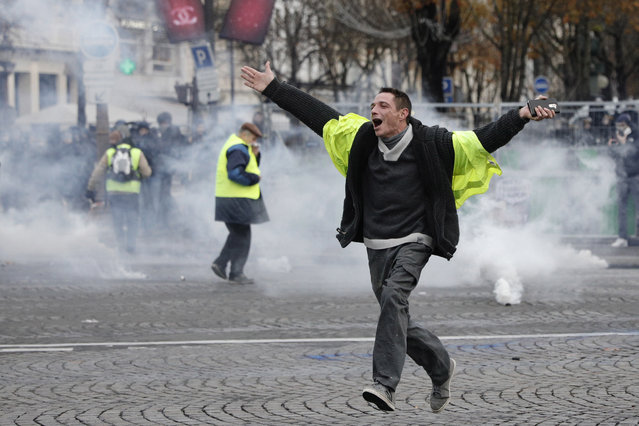 A demonstrator braves the tear gas during clashes on the famed Champs-Elysees avenue in Paris, as he protests with others against the rising of the fuel taxes, France, Saturday, November 24, 2018. France is deploying thousands of police to try to contain nationwide protests and road blockades by drivers angry over rising fuel taxes and Emmanuel Macron's presidency. (Photo by Kamil Zihnioglu/AP Photo) 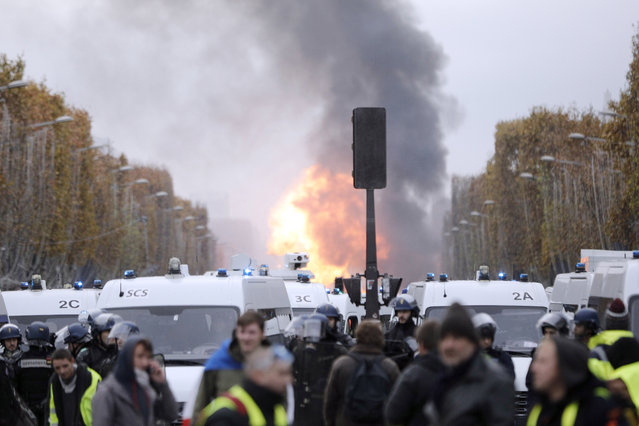 A huge explosion is seen on the famed Champs-Elysees avenue, after protesters, called the yellow jackets, set on fire a construction trailer during clashes with riot police as they protest against the fuel taxes, in Paris, France, Saturday, Novemner 24, 2018. French police fired tear gas and water cannons to disperse demonstrators in Paris Saturday, as thousands gathered in the capital and staged road blockades across the nation to vent anger against rising fuel taxes and Emmanuel Macron's presidency. (Photo by Kamil Zihnioglu/AP Photo) 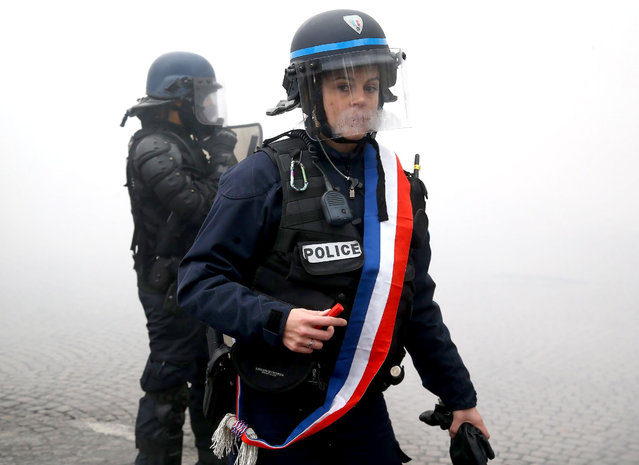 A policewoman wearing a tricolour sash braves the teargas in Paris, France on November 24, 2018. Thousands had travelled from across France to show their anger at the French president, Emmanuel Macron, and the government. The interior minister, Christophe Castaner, said 8,000 protesters had arrived in Paris by mid-morning, 5,000 of them on the Champs Élysées, which had been closed off. (Photo by Mchiche/News Pictures/Rex Features/Shutterstock) 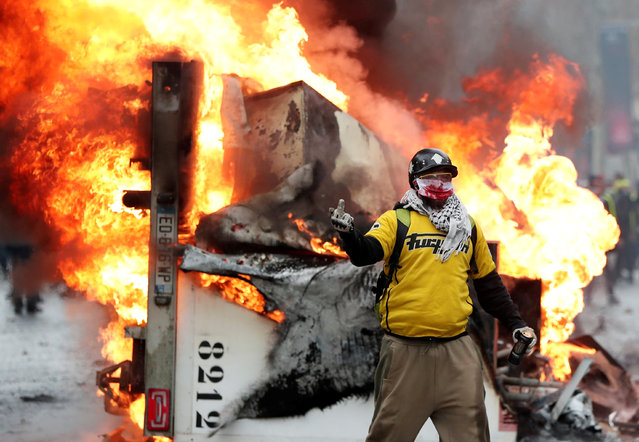 A protester gestures during a “Yellow vest” protest against higher fuel prices during clashes on the Champs-Elysees in Paris, France, November 24, 2018. (Photo by Benoit Tessier/Reuters) 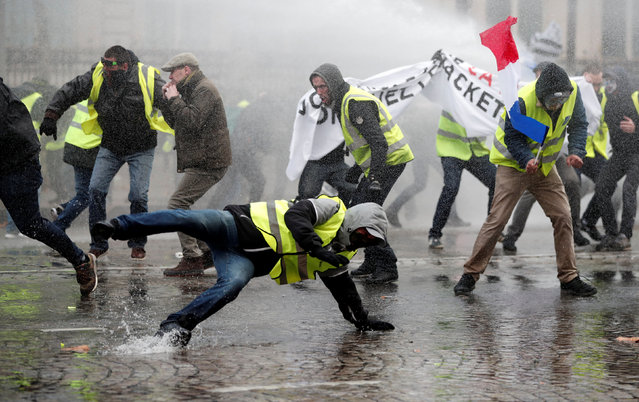 Protesters wearing yellow vests, a symbol of a French drivers' protest against higher fuel prices, face a water canon fired by police during clashes on the Champs-Elysees in Paris, France, November 24, 2018. (Photo by Benoit Tessier/Reuters) 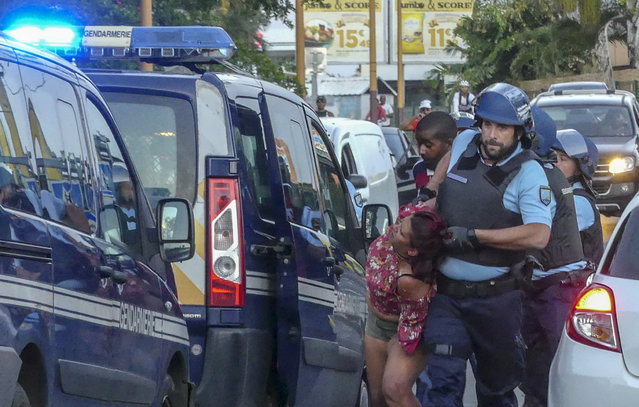 A protester is dragged away and arrested by a police officer after she was seen with others blocking the traffic in Sainte Marie, while protesting against the rising of the fuel and oil prices, in the Indian Ocean island of Reunion, Thursday, November 22, 2018. France is deploying soldiers to stem violence in the Indian Ocean island of Reunion after protests over fuel tax hikes degenerated into looting and rioting. (Photo by Fabrice Wislez/AP Photo) 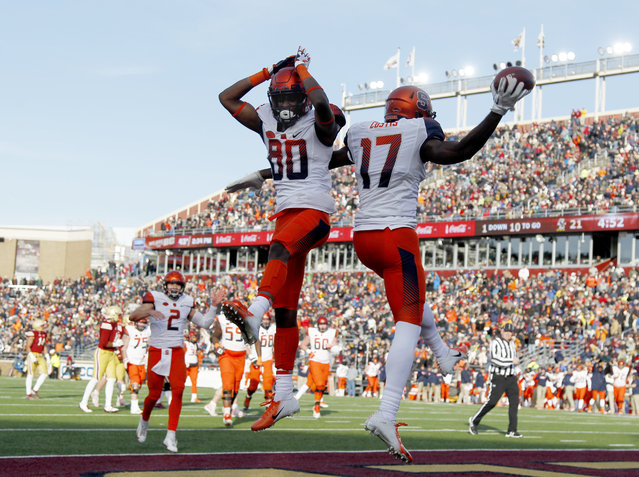 Syracuse wide receiver Jamal Custis (17) celebrates with teammate Taj Harris (80) after scoring a touchdown during the second half of an NCAA college football game against Boston College, Saturday, November 24, 2018, in Boston. (Photo by Mary Schwalm/AP Photo) 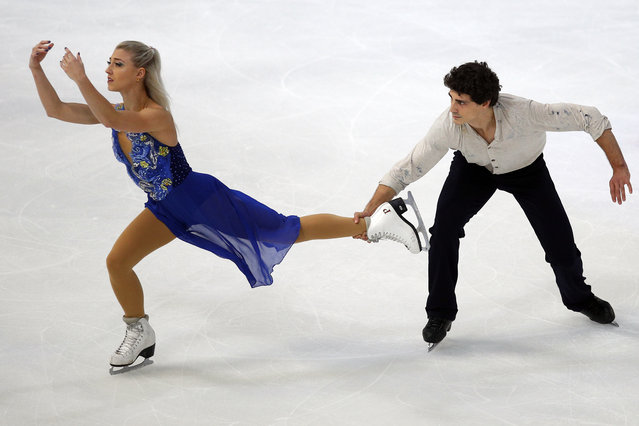 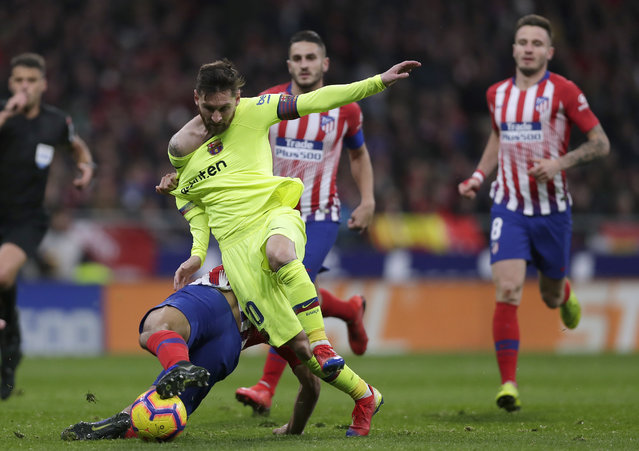 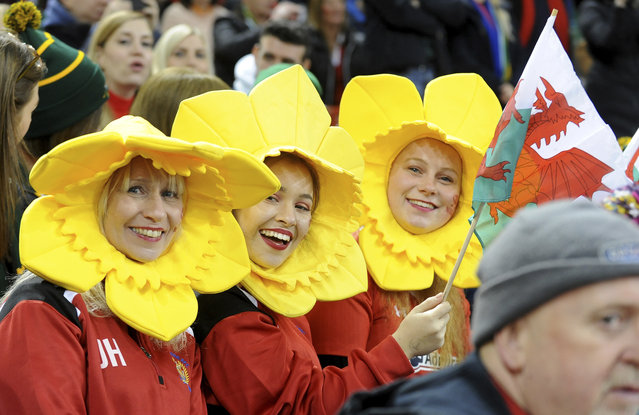 Welsh fans wait for the start of the rugby union international match between Wales and South Africa at the Principality Stadium in Cardiff, Wales, Saturday, November 24, 2018. (Photo by Rui Vieira/AP Photo) Cuban doctors holding Brazilian and Cuban flags take a selfie before they and other Cuban physicians return home, at the airport in Brasilia, Brazil, Thursday, November 22, 2018. Cuba announced it is recalling the physicians in the “More Doctors” program after Brazilian President-elect Jair Bolsonaro said the program could continue only if doctors get their full pay directly rather from the Cuban government and are able to bring their families with them. (Photo by Eraldo Peres/AP Photo) Tents made from thick cardboard have been distributed to homeless people in Brussels, Belgium on November 21, 2018. (Photo by Isopix/Rex Features/Shutterstock) 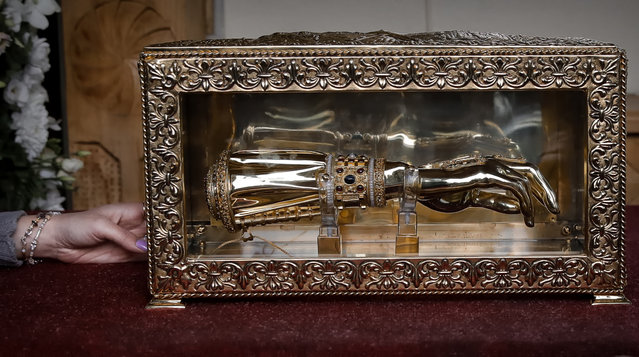 A woman touches the box containing the remains of Holy Hand of St. Andrew, in Bucharest, Romania, Saturday, November 24, 2018, a day before the dedication of the national cathedral. The “Salvation of the People” cathedral, still unfinished, has cost, according to the church, 110 million euros ($125 million) and will be consacrated Sunday. (Photo by Vadim Ghirda/AP Photo) 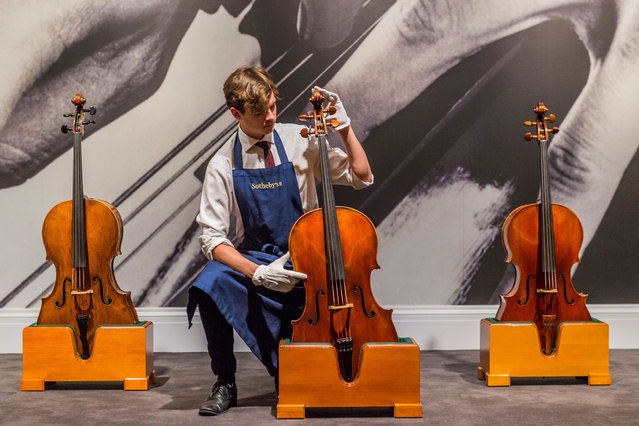 An assistant adjusts a Giovanni Battista Guadagnini cello made in Turin in 1783 which is part of the Rostropovich collection at Sothebys in London, England on November 23, 2018. (Photo by Guy Bell/Rex FeaturesX/Shutterstock) 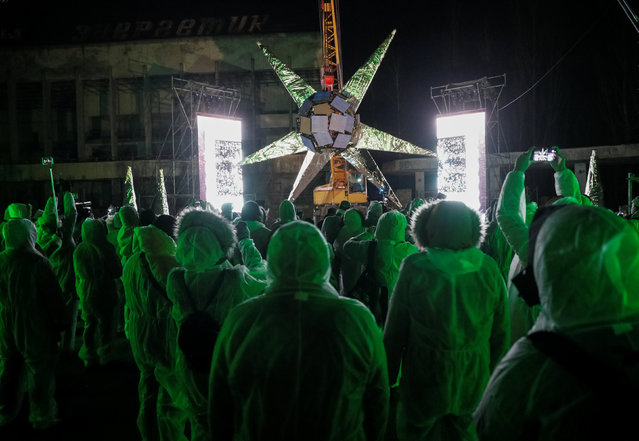 Visitors attend a presentation of the “Artefact” digital sculpture, which addresses problems of fake news, post truth and manipulation in media, at the central square of the abandoned city of Pripyat near the Chernobyl nuclear power plant, Ukraine November 22, 2018. (Photo by Gleb Garanich/Reuters) 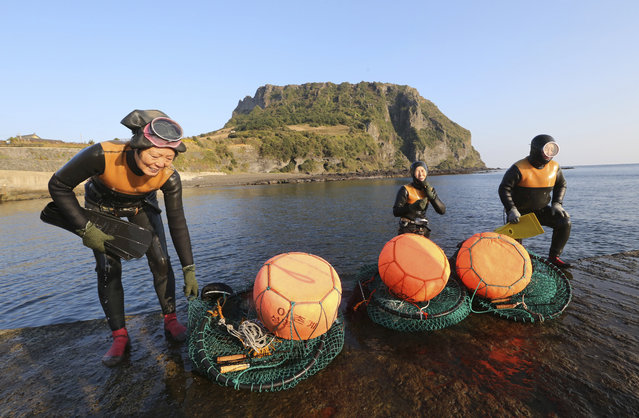 South Korean Haenyeos come out from the water after catching turban shells and abalones while diving in Jeju, south of Seoul, South Korea, Friday, November 23, 2018. Known as Haenyeo, which literally translates as “sea women”, they hold their breath up to two minutes as they pry abalone or gather seaweed from the ocean floor. (Photo by Ahn Young-joon/AP Photo) 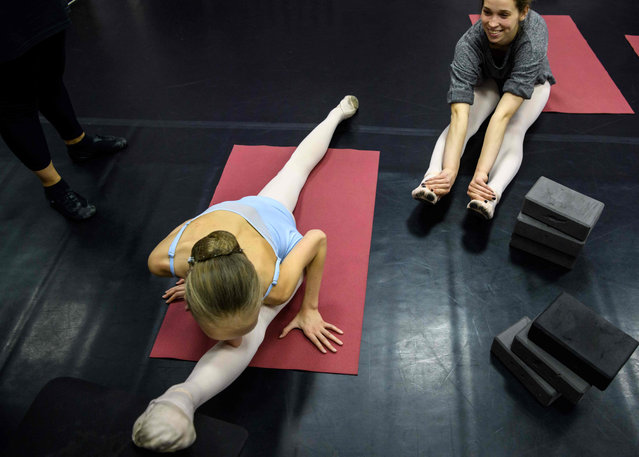 Girls attend a class at a ballet studio in Moscow on November 22, 2018. In a small studio in northern Moscow, parents and grandparents sit in a corridor waiting for children as young as three to finish their ballet class. (Photo by Mladen Antonov/AFP Photo)
Edit Del
26 Nov 2018 00:07:00, post received 0 comments
Publication archive:
←   →
Popular tags:
All tags
Last searches: