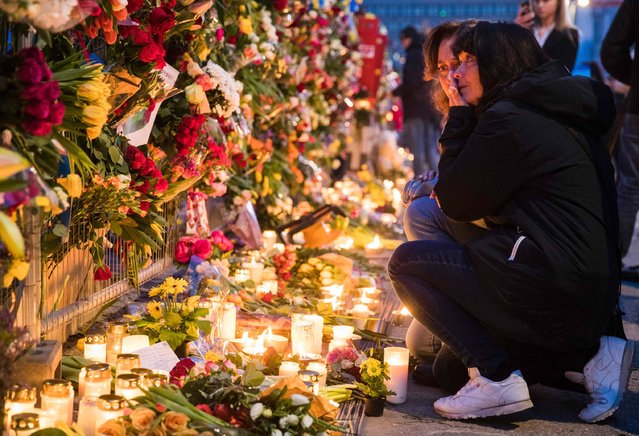 Well wishers comfort each other as they place flowers at a makeshift memorial outside a department store in Stockholm on April 8, 2017. 4 people died and 15 was injured when a hijacked truck plunged into a crowd in a pedestrian shopping area in the Swedish capital on April 7, 2017. (Photo by Odd Andersen/AFP Photo) 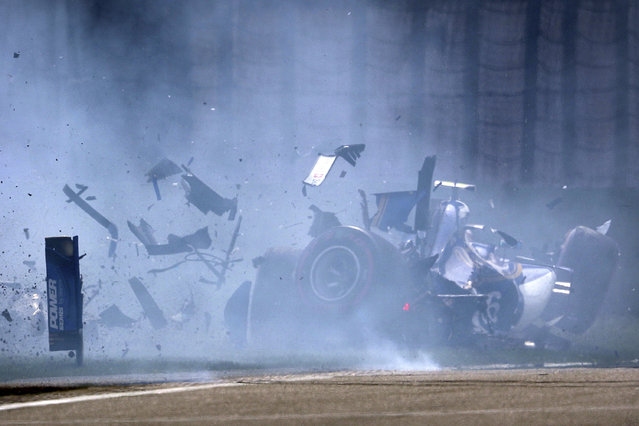 Sauber driver Antonio Giovinazzi of Italy crashes into the wall during the qualifying session for the Chinese Formula One Grand Prix at the Shanghai International Circuit in Shanghai, China, Saturday, April 8, 2017. (Photo by Mark Schiefelbein/AP Photo) 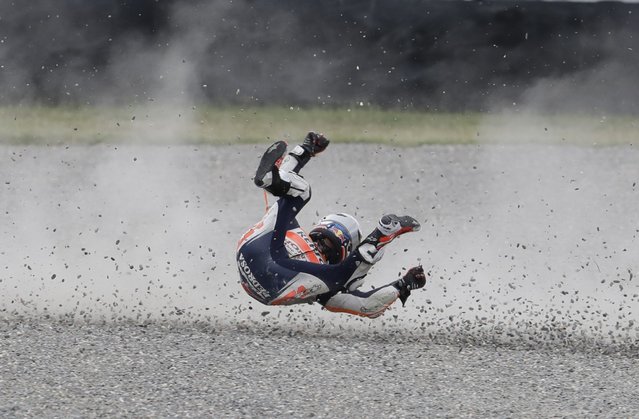 Spain’s Dani Pedroza rolls on the gravel after he fell off his Honda during Argentina’s Motorcycle Grand Prix at the Termas de Rio Hondo circuit in Argentina, April 9, 2017. (Photo by Natacha Pisarenko/AP) 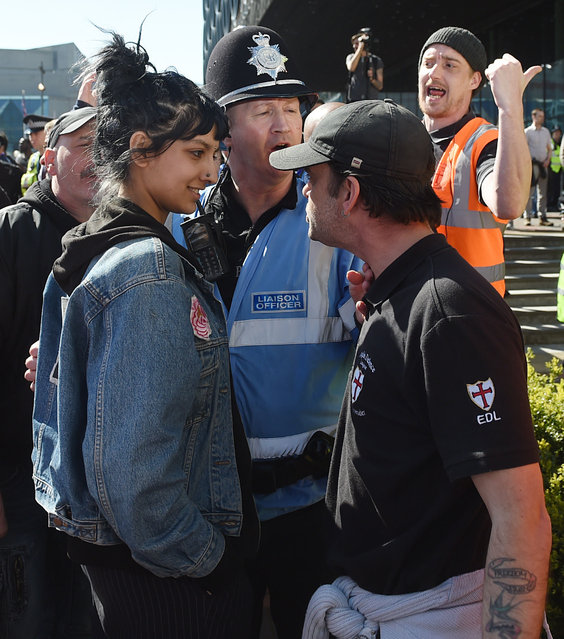 An angry English Defence League member clashes in Birmingham with a calm member of the public in an image widely shared on social media yesterday, April 9, 2017. Around 50 EDL protestors turned up for a rally; a local mosque had opted to counter the far-right group’s antagonism with a “best of British” tea party which was attented by over 300 people. (Photo by Joe Giddens/PA Wire) 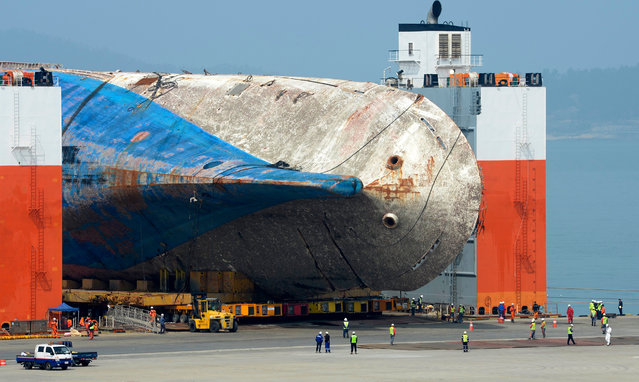 The salvaged Sewol ferry is moved onto land by module transporters to be put on a dry dock at a port in Mokpo, 410 km southwest of Seoul, South Korea, 09 April 2017. Sewol sank on 16 April 2014, killing more than 300 people, most of them high school students who were on a school excursion. The search for nine people still missing will commence after the ferry is anchored on land. (Photo by EPA/Yonhap) 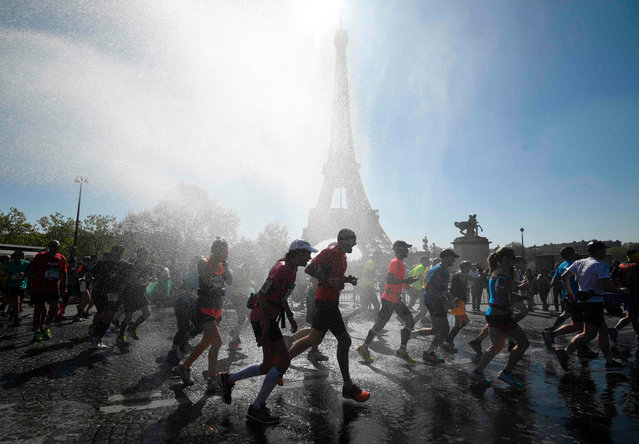 Runners go through a cooling water stream as they compete in the 41 st Paris Marathon in front of the Eiffel tower in Paris on April 9, 2017. (Photo by Eric Feferberg/AFP Photo) 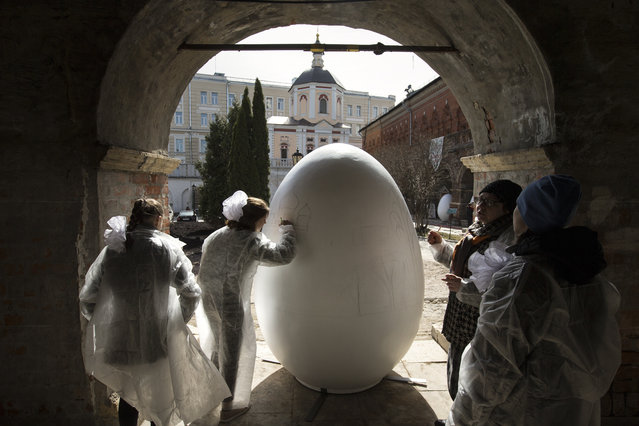 Children paint a huge symbolic egg in preparation for Orthodox Easter, after the Palm Sunday mass at the St. Peter's Cathedral in the High-Petrovsky monastery in Moscow, Russia, on Sunday, April, 9, 2017. (Photo by Alexander Zemlianichenko Jr./AP Photo) 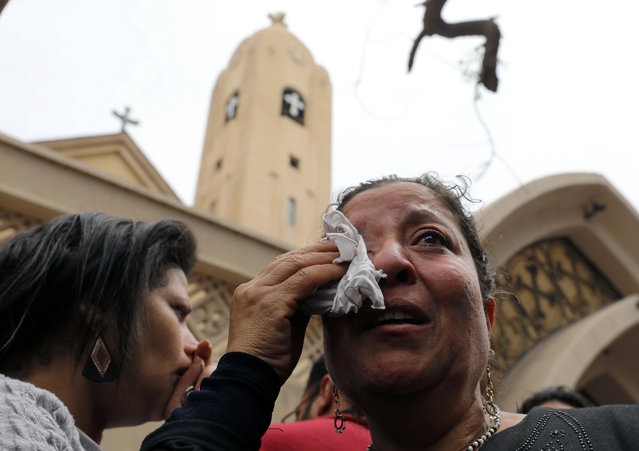 A relative of one of the victims reacts after a church explosion killed at least 21 in Tanta, Egypt, April 9, 2017. (Photo by Mohamed Abd El Ghany/Reuters) 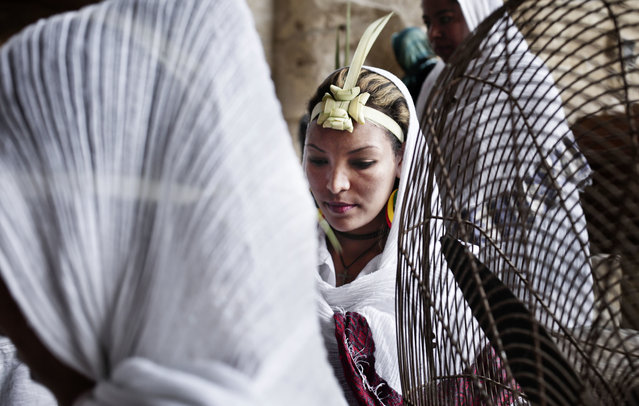 Ethiopians pray during Palm Sunday mass inside the Cave Cathedral or St. Sama'ans Church on the Mokattam hills overlooking Cairo, Egypt, Sunday, April 9, 2017. Christians in Egypt are celebrating Palm Sunday, the start of the Holy Week that leads up to Easter. (Photo by Nariman El-Mofty/AP Photo) 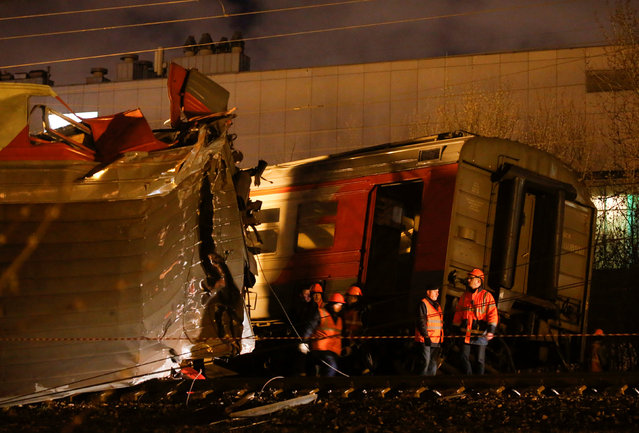 Emergencies Ministry members work at the site of a collision between a passenger train and a suburban train in Moscow, Russia April 9, 2017. (Photo by Maxim Shemetov/Reuters) 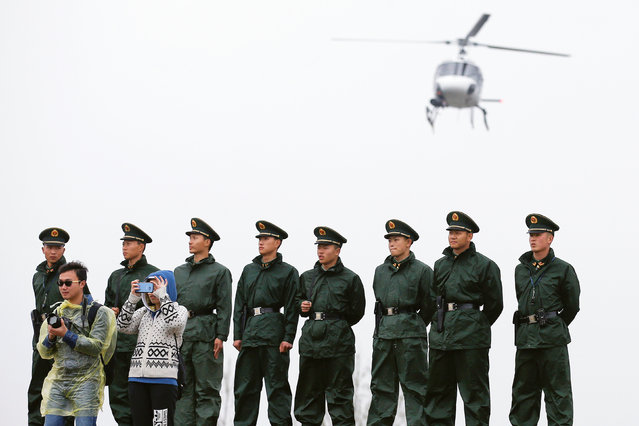 Security personnel and spectators follow the Chinese Grand Prix at the Shanghai International Circuit in Shanghai, China on April 9, 2017. (Photo by Aly Song/Reuters) 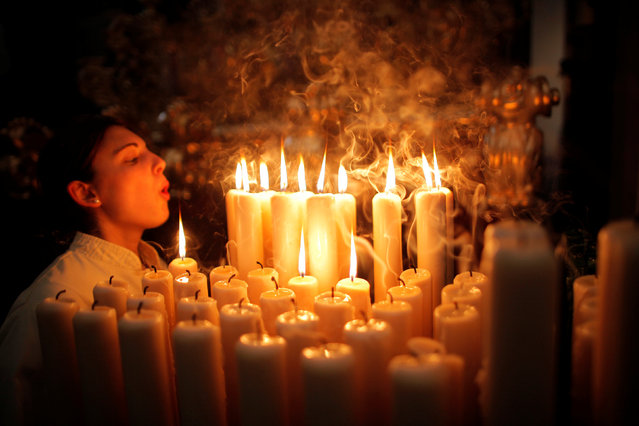 A penitent of “Lagrimas and Favores” blows out candles inside a church as she takes part in a Palm Sunday procession, marking the start of the Holy Week in Malaga, southern Spain, April 9, 2017. (Photo by Jon Nazca/Reuters) 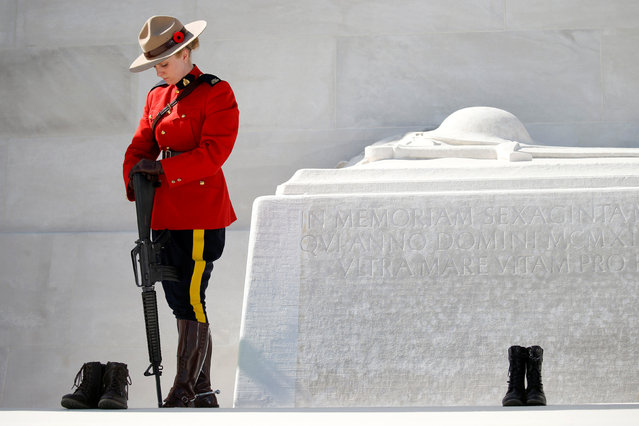 A Canadian police mounted officer stands guard before the ceremony to commemorate the 100th anniversary of the battle of Vimy Ridge, at Canadian National Memorial in Vimy, France, April 9, 2017. (Photo by Pascal Rossignol/Reuters) 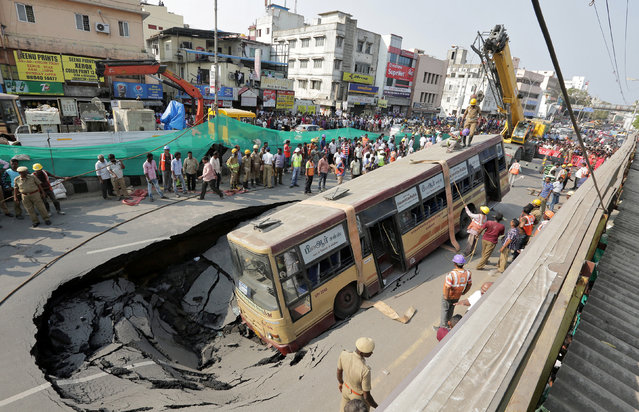 Rescue workers prepare to lift a passenger bus from a pit after a road caved in, in Chennai, India, April 9, 2017. (Photo by Reuters/Stringer) 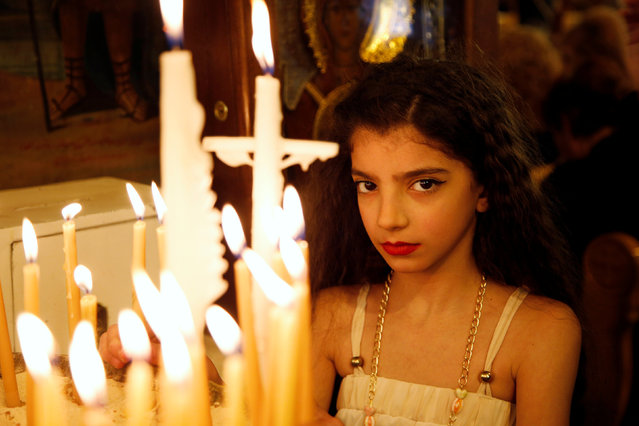 A girl stands near candles inside Al-Saleeb church during Palm Sunday in al-Qassaa, Damascus, Syria April 9, 2017. (Photo by Omar Sanadiki/Reuters) 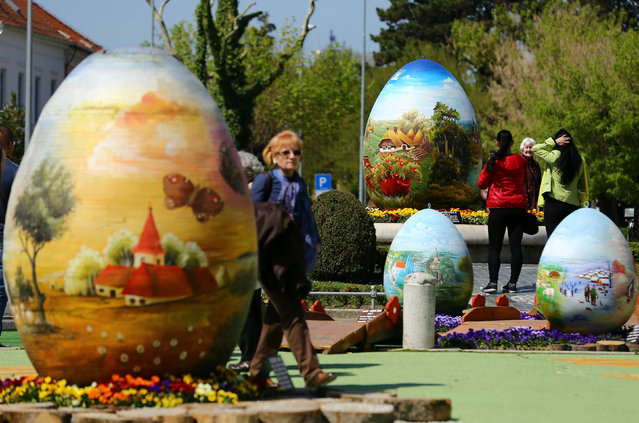 People walking between a two-metre-high Easter eggs painted in the traditional naive art style exhibition in Koprivnica, Croatia, April 9, 2017. The project, which started ten years ago, involves painters decorating two-metre-tall polyester eggs, which are then sent to cities in the country and abroad to be displayed in public squares in time for Easter festivities. (Photo by Antonio Bronic/Reuters) 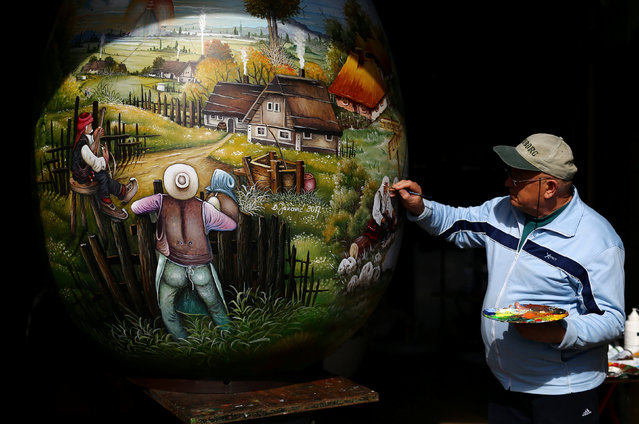 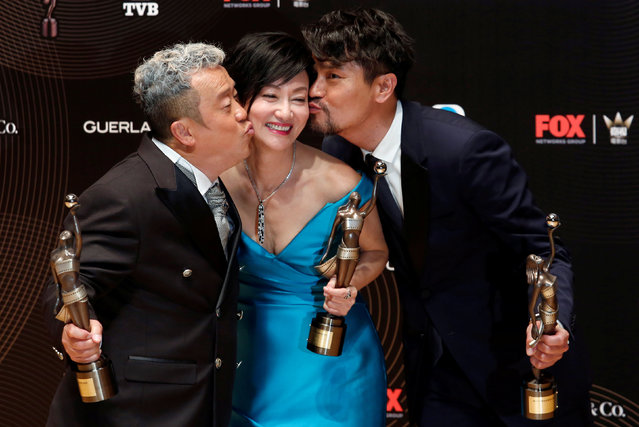 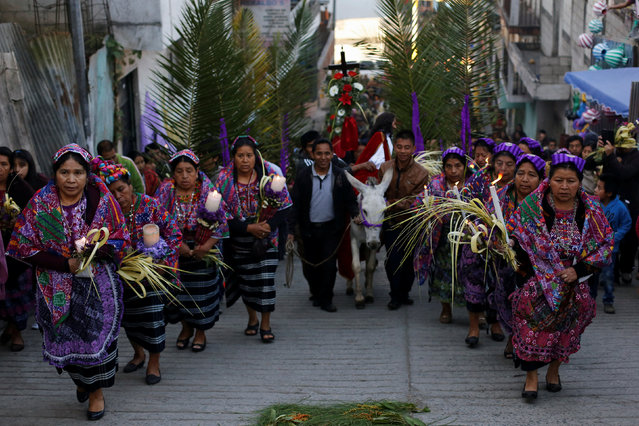 Residents take part in a procession following a figure of Jesus Nazarene on a donkey during Palm Sunday celebration in San Pedro Sacatepequez on the outskirts of Guatemala City, Guatemala April 9, 2017. (Photo by Luis Echeverria/Reuters) 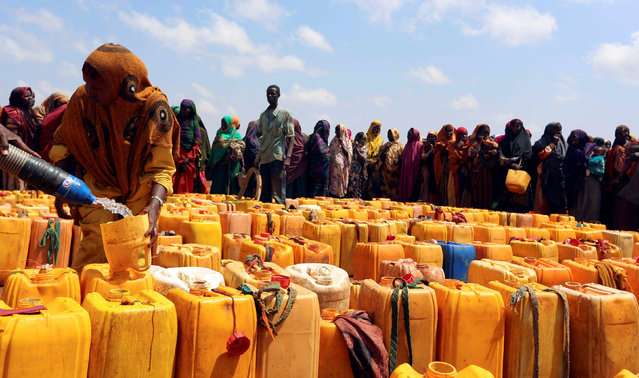 Internally displaced Somali women gather with their jerrycans to receive water at a distribution centre organized by a Qatar charity after fleeing from drought stricken regions in Baidoa, west of Somalia's capital Mogadishu, April 9, 2017. (Photo by Feisal Omar/Reuters) 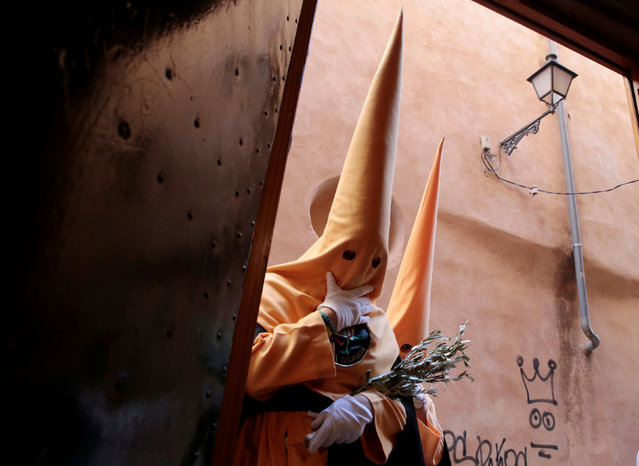 Penitents of “Santa Monica” brotherhood enter a church before the start of a Palm Sunday procession, during the Holy Week in Palma de Mallorca, Spain April 9, 2017. (Photo by Enrique Calvo/Reuters) 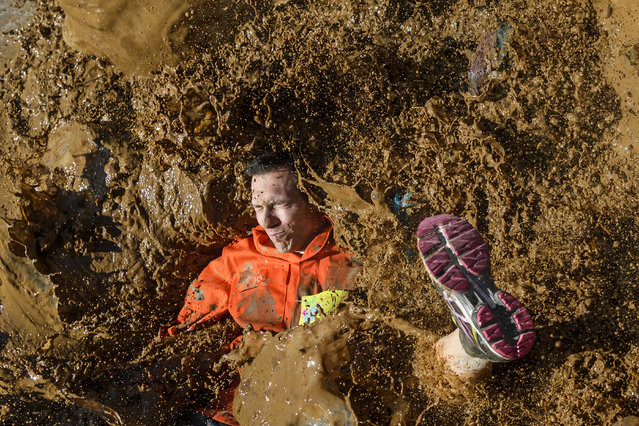 A competitors lands in mud as they take part in the “Barjot Run” obstacle race in Biere, western Switzerland, on April 8, 2017. Some 1500 participants took part in the 7.5km-long race. (Photo by Fabrice Coffrini/AFP Photo) 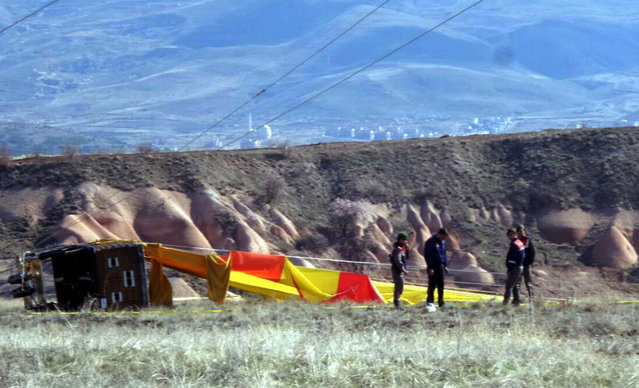 Security members investigate at the site after a hot air balloon hit a high-voltage transmission line and crashed near Cappadocia, a popular tourist destination in central Turkey, Sunday, April 9, 2017. The state-run Anadolu Agency says several hot air balloons lifted off Sunday in Turkey's Cappadocia region to give tourists a scenic view of the historic site, and one hit the electric line during its descent. (Photo by DHA-Depo Photo via AP Photo) 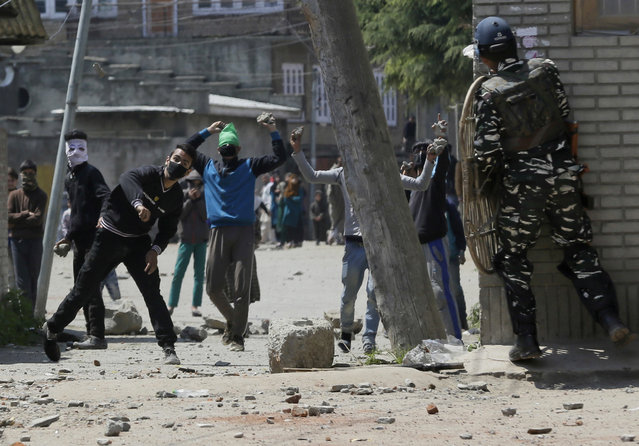 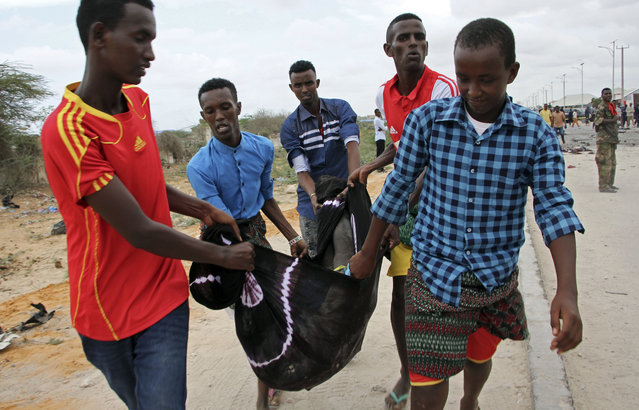 People carry away the body of a man killed in a suicide car bomb attack, near the defense ministry compound in Mogadishu, Somalia Sunday, April 9, 2017. Somalia's new military chief Gen. Mohamed Ahmed Jimale survived the blast which targeted the convoy he was traveling in with senior military officials, police say, but a number of soldiers and civilians were killed. (Photo by Farah Abdi Warsameh/AP Photo) 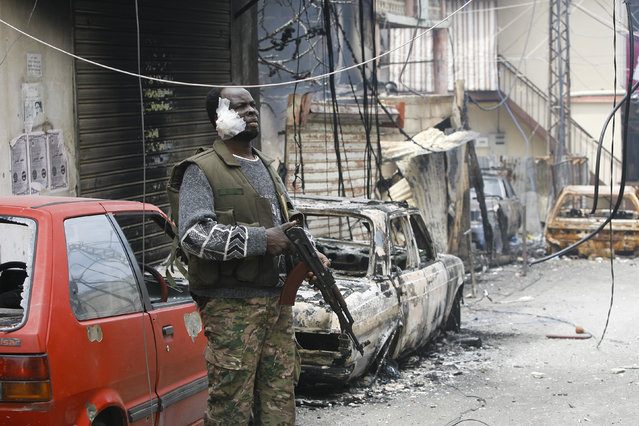 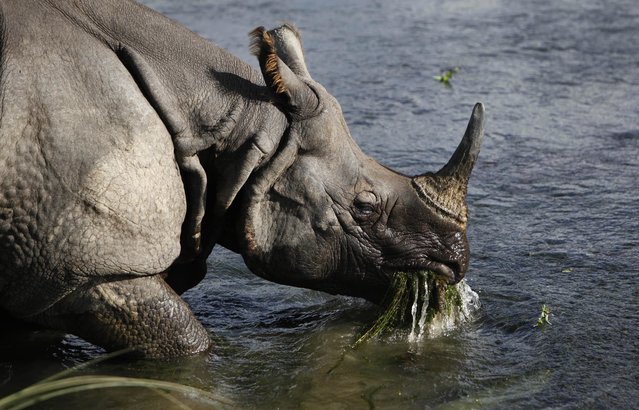 In this Sunday, Aug. 1, 2010 file photo, a greater one horned rhino eats water plants from a river in Janakauli community forest bordering Chitwan National Park, Nepal. Officials say authorities are searching for poachers who killed a rare one-horned rhino over the weekend of April, 8 2017 in the forests of southern Nepal and cut off the horn. Forest officer Nurendra Ryal said it was the first killing of a rhino in the Chitwan National Forest in nearly three years and soldiers and forest rangers were scouring the forests and nearby areas for the people who shot the rhino. (Photo by Gemunu Amarasinghe/AP Photo) 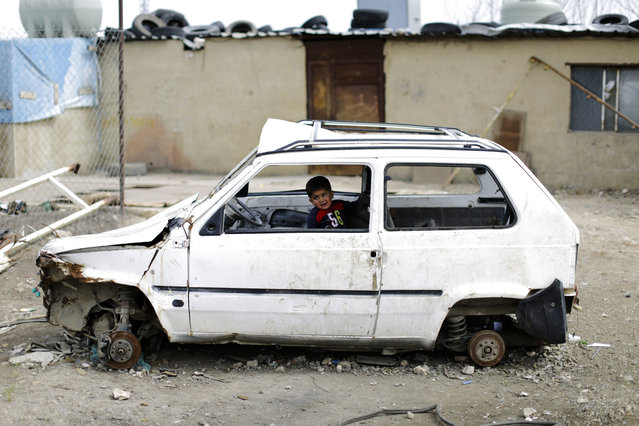 A Syrian refugee boy plays inside a ruin car at an informal refugee camp, at Al-Marj town in Bekaa valley, east Lebanon Lebanon, Saturday, April 8, 2017. For the millions of Syrian refugees scattered across camps and illegal settlements across the region, the chemical attack on a town in northern Syria and subsequent U.S. strike was a rare moment when the world briefly turned its attention to Syria, before turning away again. (Photo by Hassan Ammar/AP Photo) 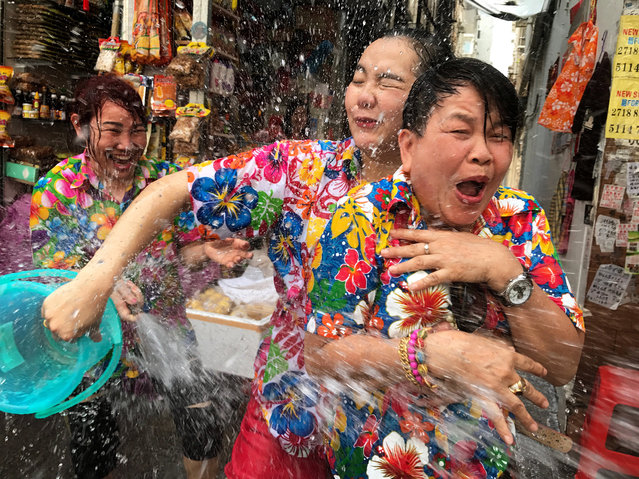 People spray water in the street ahead of “Songkran”, the annual Thai New Year water-throwing festival, in Kowloon City, Hong Kong, China, 09 April 2017. The pouring of water is a key element in the festival as it represents purification and the washing away of one's sins and bad luck for the year. The event also includes a “Miss Songkran” pageant where contestants are clothed in traditional Thai dress, and a winner is crowned. This year's “Songkran” will begin in Thailand on 13 April 2017. (Photo by Alex Hofford/EPA)
Edit Del
10 Apr 2017 09:05:00, post received 0 comments
Publication archive:
←   →
Popular tags:
All tags
Last searches: