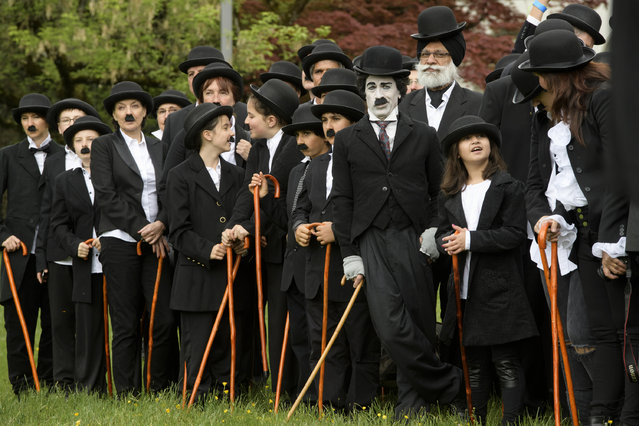 Some 662 people dressed as “The Tramp” pose for a group picture to mark the first anniversary of Chaplin's World By Grevin, and Charlie Chaplin's birthday, as the museum plans to set the record for the worl's largest gathering of people dressed as The Tramp, on April 16, 2017 in Corsier-sur-Vevey. Chaplins World, a large-scale museum dedicated to Charlie Chaplin and his lifes work is located in the Manoir de Ban and its park where Chaplin and his family lived through 1952 -1977. (Photo by Richard Juilliart/AFP Photo) 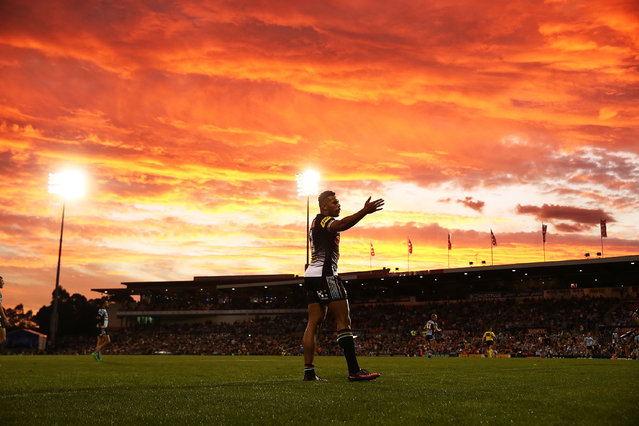 Waqa Blake of the Panthers reacts to a decsision during the round seven NRL match between the Penrith Panthers and the Cronulla Sharks at Pepper Stadium on April 16, 2017 in Sydney, Australia. (Photo by Mark Metcalfe/Getty Images) 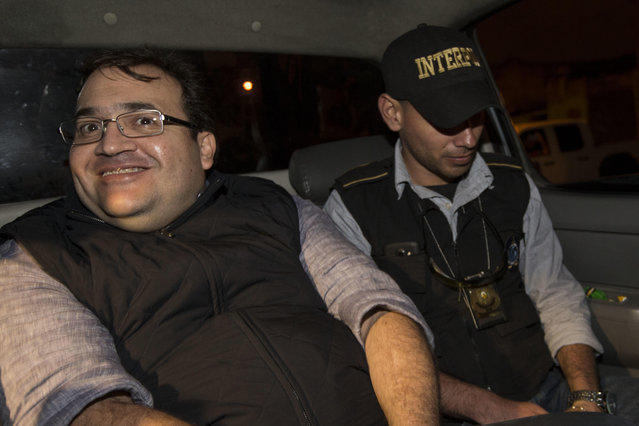 Mexico's former Veracruz state Gov. Javier Duarte, left, is escorted by an agent of the local Interpol office inside a police car as they arrive at Guatemala City, early Sunday, April 16, 2017. Duarte, who is accused of running a ring that allegedly pilfered from state coffers, has been detained in Guatemala after six months as a fugitive and a high-profile symbol of government corruption. (Photo by Moises Castillo/AP Photo) 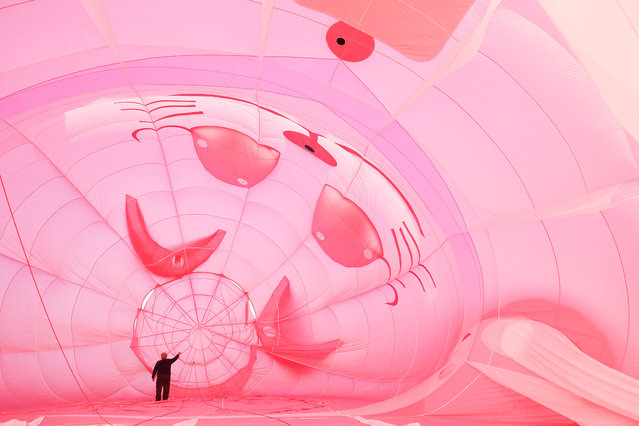 Pilot Michael Loy checks his balloon High Kitty before flying in the Meander over Martinborough event at the Wairarapa Balloon Festival on April 16, 2017 in Martinborough, New Zealand. The Wairarapa Balloon Festival is an annual event and this year features two special international balloons - High Kitty from the United States, and Alien Rocket from Canada. The festival runs from 13 – 17 April, 2017. (Photo by Hagen Hopkins/Getty Images) 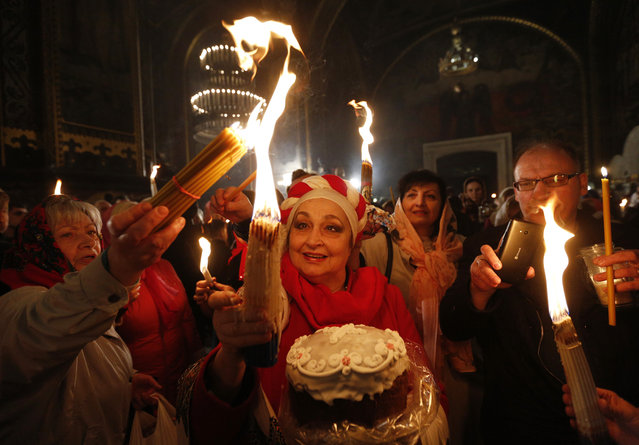 Ukrainian Orthodox faithful light candles from the Holy Fire brought from Jerusalem in St. Volodymyr Cathedral during the ceremony of the Holy Fire in Kiev, Ukraine, Saturday, April 15, 2017. The Holy Fire ceremony is part of Orthodox Easter rituals and the flame symbolizes the resurrection of Christ in a ceremony dating back to the 12th century. (Photo by Sergei Chuzavkov/AP Photo) 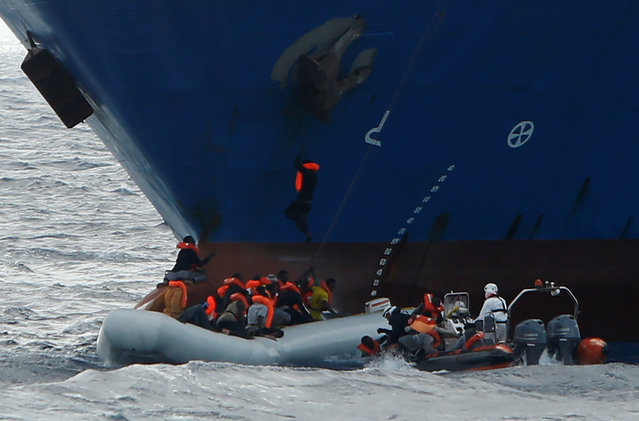 Migrants in a rubber dinghy fall into the sea alongside a rigid hulled inflatable boat (RHIB) of the Malta-based NGO Migrant Offshore Aid Station, as a migrant climbs onto the anchor of the Panama-registered ship Tuna 1 and one hangs onto its bow, after some 20 migrants on another rubber dinghy drowned in the central Mediterranean in international waters off the coast of Libya, April 16, 2017. (Photo by Darrin Zammit Lupi/Reuters) 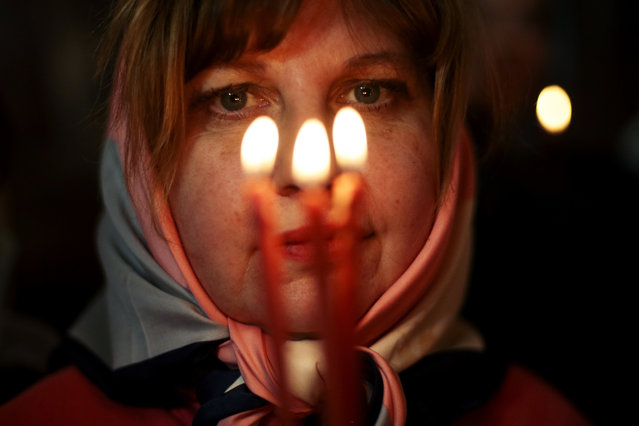 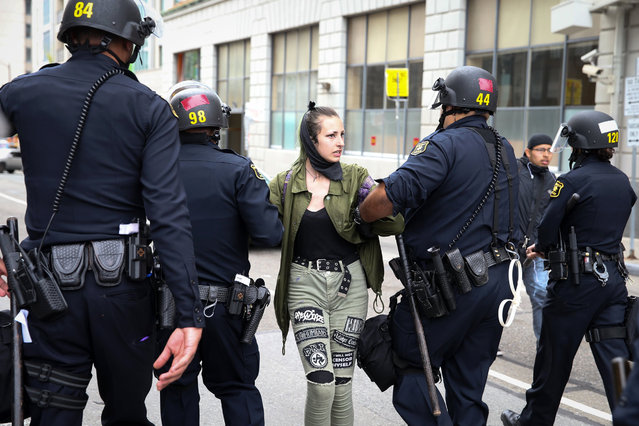 A protester is arrested following a “Patriots Day” free speech rally on April 15, 2017 in Berkeley, California. More than a dozen people were arrested after fistfights broke out at a park where supporters and opponents of President Trump had gathered. (Photo by Elijah Nouvelage/Getty Images) 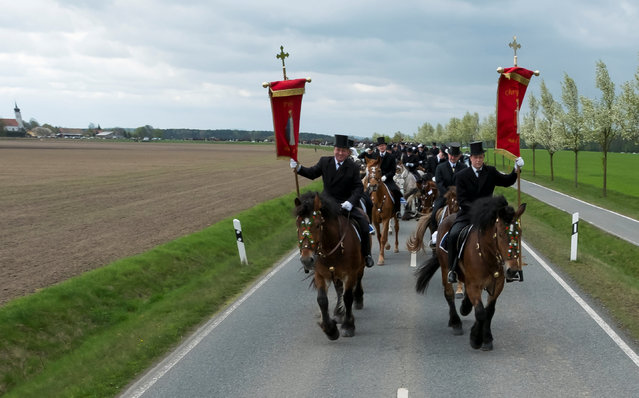 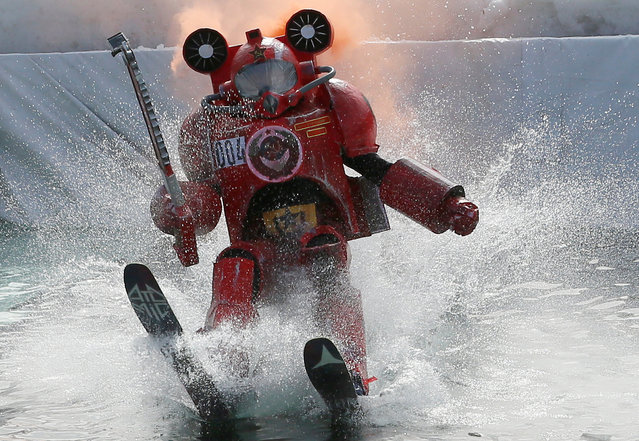 A skier in a costume attempts to cross a pool of water at the foot of a ski slope while competing in the annual “Gornoluzhnik” amateur event marking the end of the ski season, at the Bobrovy Log ski resort in the suburbs of the Siberian city of Krasnoyarsk, Russia, April 16, 2017. (Photo by Ilya Naymushin/Reuters) 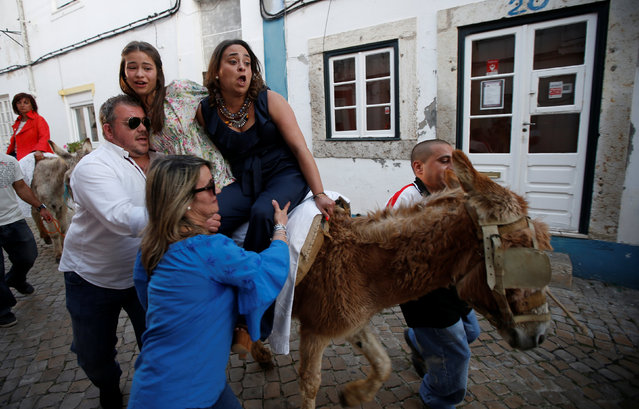 Women take part in the procession of the “Virgem da Atalaia” during Holy Week in Alcochete, near Lisbon, Portugal April 16, 2017. (Photo by Rafael Marchante/Reuters) 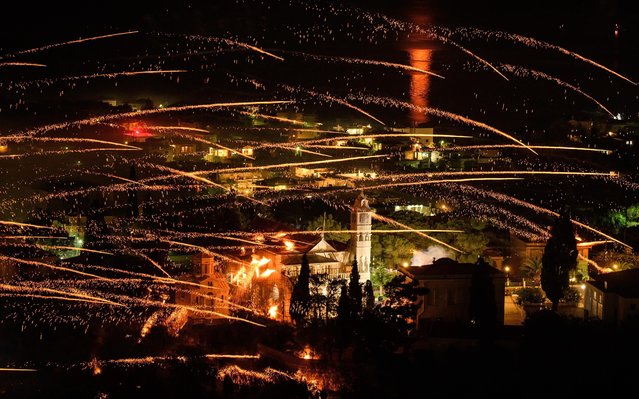 The Panaghia Erithiani Church is hit by rockets from supporters of the Aghios Marko Church during the annual Rocket War, known locally as the “Rouketopolemos”, on April 15, 2017 in Chios, Greece. The event takes place at Easter in the town of Vrontados, where the congregations from two rival churches launch a “rocket war”, attempting to hit the bell tower of the opposing church with tens of thousands of home-made rockets. Homes in the area are forced to erect temporary protective fencing to prevent damage to their property while tourists come from all over the world to watch the spectacle. (Photo by Leon Neal/Getty Images) 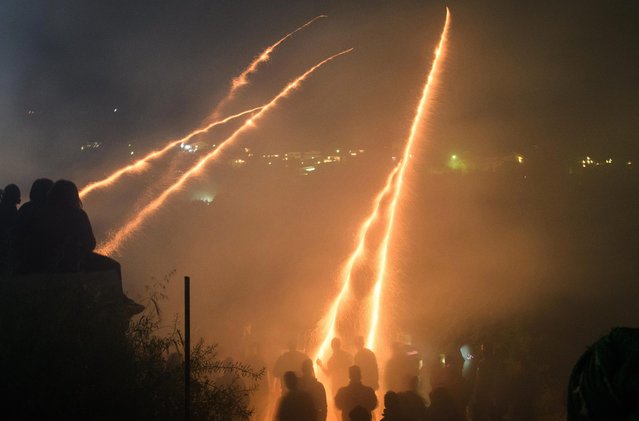 Supporters of the Panaghia Erithiani Church fire rockets from home-made racks at the Aghios Marko Church during the annual Rocket War, known locally as the “Rouketopolemos”, on April 15, 2017 in Chios, Greece. (Photo by Leon Neal/Getty Images) 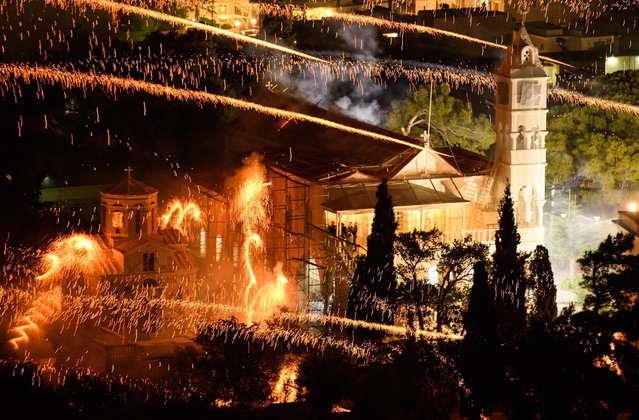 The Panaghia Erithiani Church is hit by rockets from supporters of the Aghios Marko Church during the annual Rocket War, known locally as the “Rouketopolemos”, on April 15, 2017 in Chios, Greece. (Photo by Leon Neal/Getty Images) 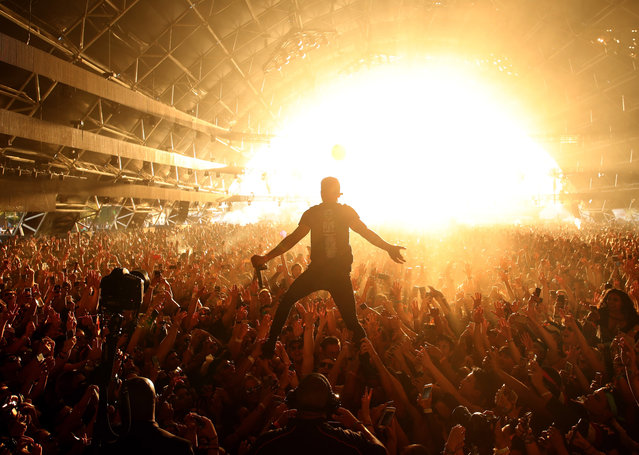 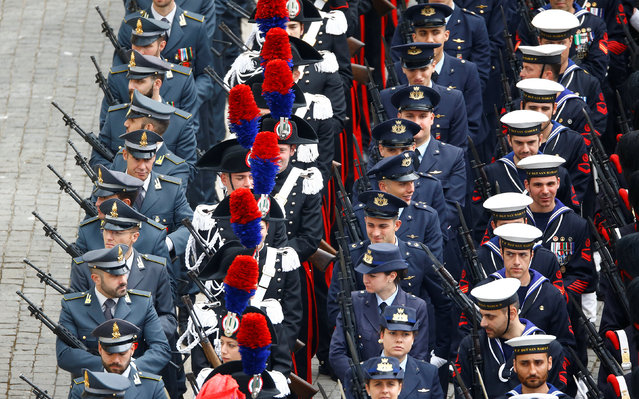 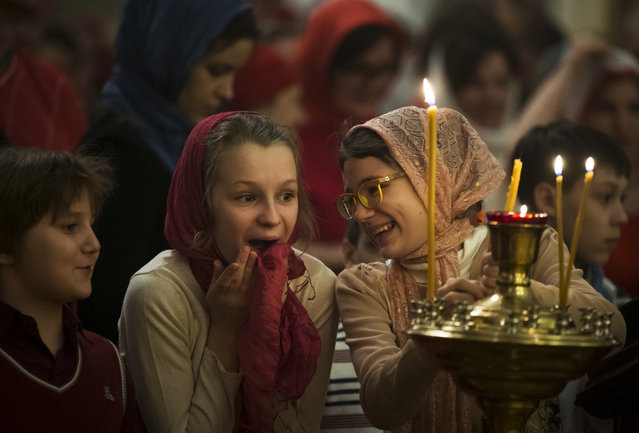 Girls react during the Orthodox Easter service at the Church of the Holy Martyr Tatiana just next to the Kremlin Wall in Moscow, Russia, Sunday, April 16, 2017. (Photo by Alexander Zemlianichenko/AP Photo) 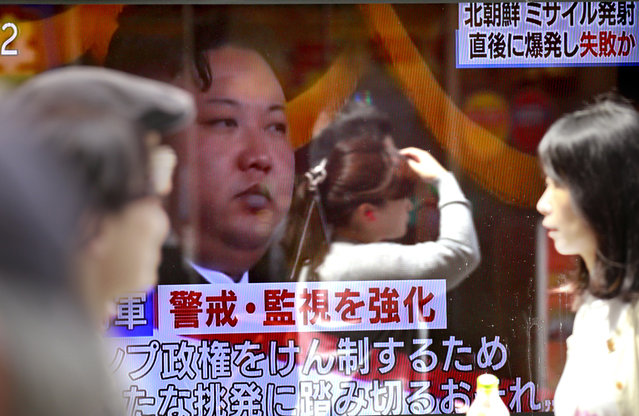 People walk past a TV news showing an image of North Korean leader Kim Jong Un while reporting North Korea's rocket launch, in Tokyo, Sunday, April 16, 2017. A North Korean missile exploded during launch Sunday from the country's east coast, U.S. and South Korean officials said, a high-profile failure that comes as a powerful U.S. aircraft carrier approaches the Korean Peninsula in a show of force. The letters on the top read “North Korea's missile might have exploded and failed soon after launch”. (Photo by Shizuo Kambayashi/AP Photo) 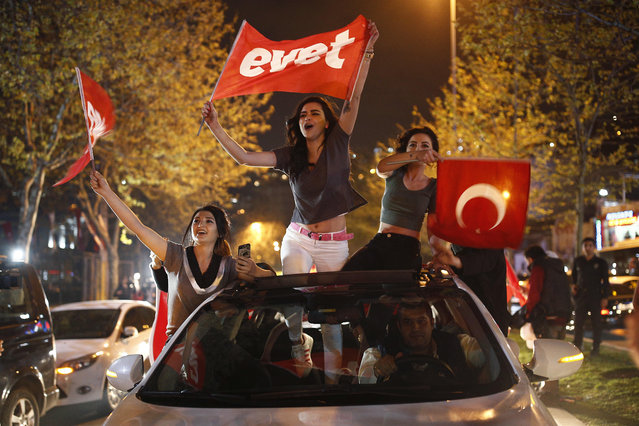 Supporters of the “Yes” vote, wave flags during celebrations in Istanbul, on Sunday, April 16, 2017. With 97 percent of the ballots counted in Turkey's historic referendum, those who back constitutional changes greatly expanding President Recep Tayyip Erdogan's powers had a narrow lead Sunday night, the official Anadolu news agency said. The flags read in Turkish : “Yes”. (Photo by Emrah Gurel/AP Photo) 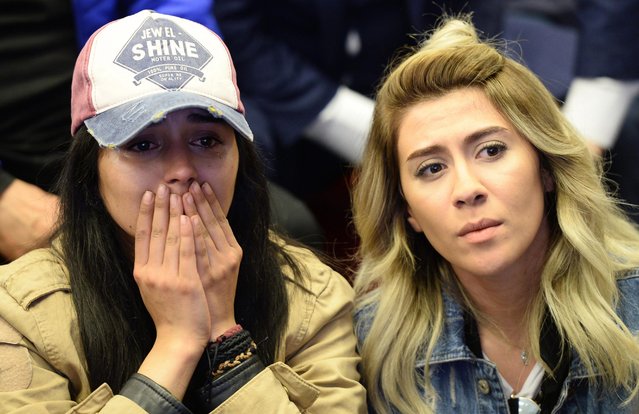 A supporter of Republican People's Party (CHP) cries as she watches the polling results during a referendum in Ankara, April 16, 2017. Turkey. Millions of Turks are heading to the polls to vote on a set of 18 proposed amendments to the Constitution of Turkey. A “Yes” vote would grant President Recep Tayyip Erdogan, who seeking to replace Turkey's parliamentary system, with full executive powers. (Photo by Erhan Ortac/Getty Images) 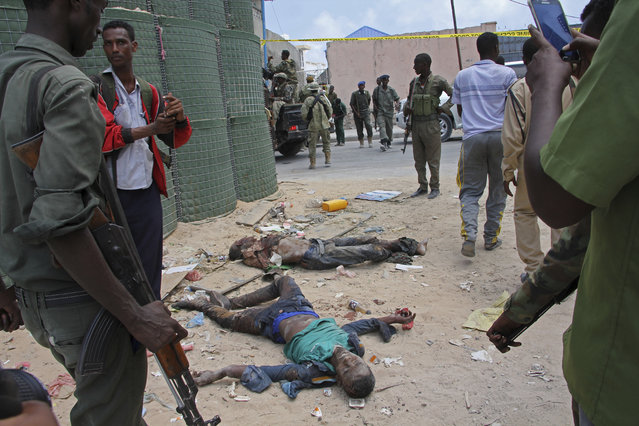 Somali soldiers stand near the dead bodies of two Al-shabab fighter who were killed during clashes with security forces in Mogadishu, Somalia, Sunday, April, 16, 2017. At least two Al-Shabaab militants were killed in a mortar attack in Somali capital Mogadishu on Sunday, a government official confirmed. At least three mortars landed into a residential area in Wadajir district which is near the heavily guarded Mogadishu airport, which has seen mortar attacks by the militants in the past few days. (Photo by Farah Abdi Warsameh/AP Photo) 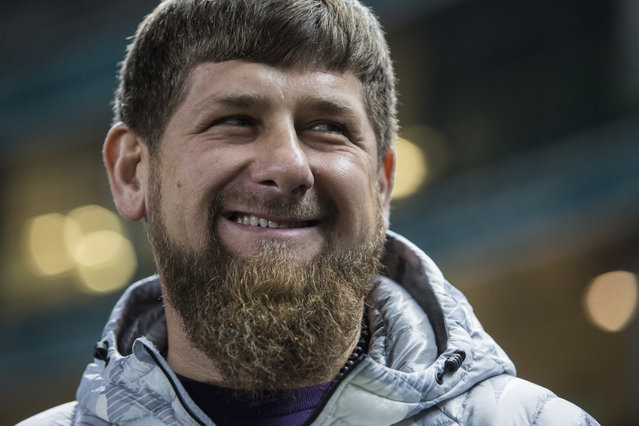 In this file photo dated Tuesday, November 15, 2016, Chechen regional leader Ramzan Kadyrov smiles before an international friendly soccer match between Russia and Romania in Grozny, Russia. Kadyrov has lashed out at international organization that have criticised the Russian region for reportedly persecuting and killing gays, accusing them of attempting to blacken the Chechnyan society, lifestyle, traditions and customs, and saying on his social media account Sunday April 16, 2017, that rights have improved in Chechnya. (Photo by Denis Tyrin/AP Photo) 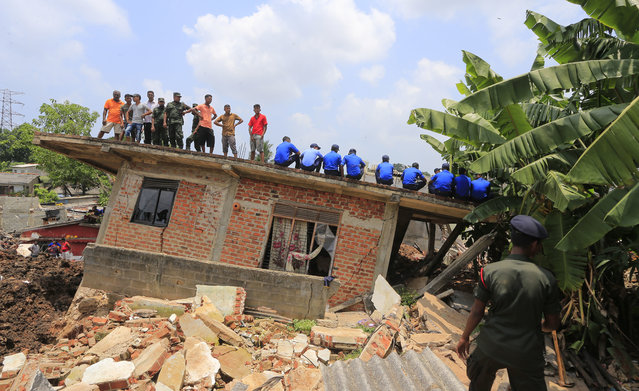 Sri Lankan military rescuers and onlookers rest on top of a damaged house at the site of a garbage dump collapse in Meetotamulla, on the outskirts of Colombo, Sri Lanka, Sunday, April 16, 2017. The death toll from the collapse of the massive garbage mound near Sri Lanka's capital rose to more than a dozen Sunday, and residents feared more victims could be buried underneath the debris. Maj. Gen. Sudantha Ranasinghe, who is heading the rescue efforts, said 78 houses were destroyed and more than 150 were damaged. (Photo by Eranga Jayawardena/AP Photo) 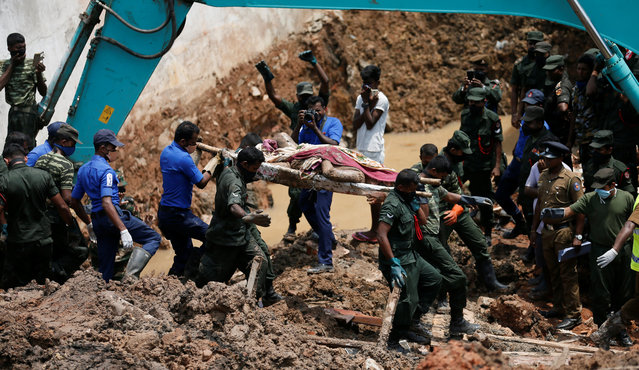 Members of the military carry a dead victim during a rescue mission after a garbage dump collapsed and buried dozens of houses in Colombo, Sri Lanka April 16, 2017. (Photo by Dinuka Liyanawatte/Reuters) 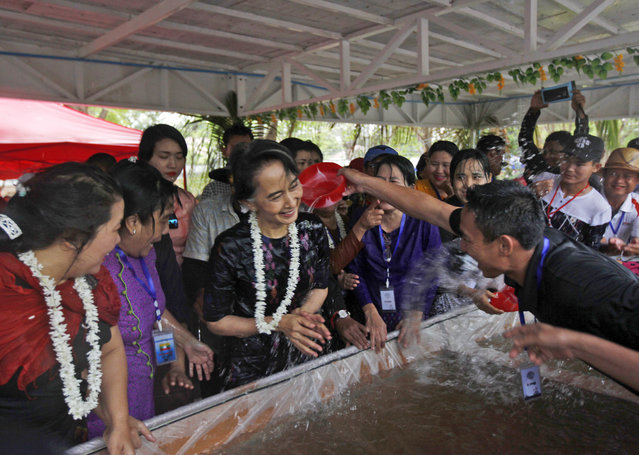 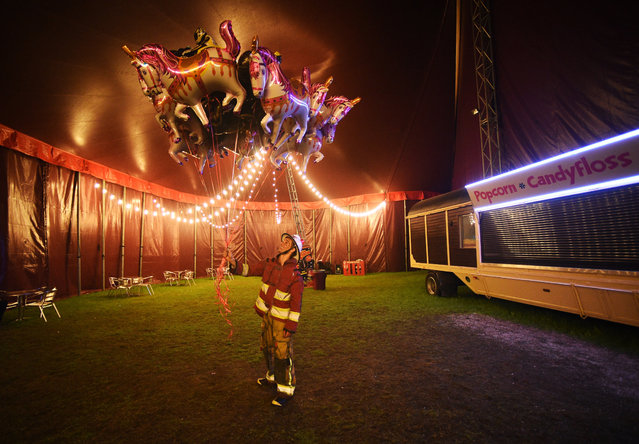 Alexandre Lupu sells balloons at the end of the Zippos Circus show in Blackheath in London, Britain, 14 April 2017. Their latest show, “Jigit!” showcases a wide range of acts from knife throwing, and swinging trapeze, to Cossack horse riders from Kahzakstan and motorcycle daredevils from Brazil. The Zippos is one of Britain's favorite family circus and has been touring the United Kingdom for more than 30 years. (Photo by Facundo Arrizabalaga/EPA) 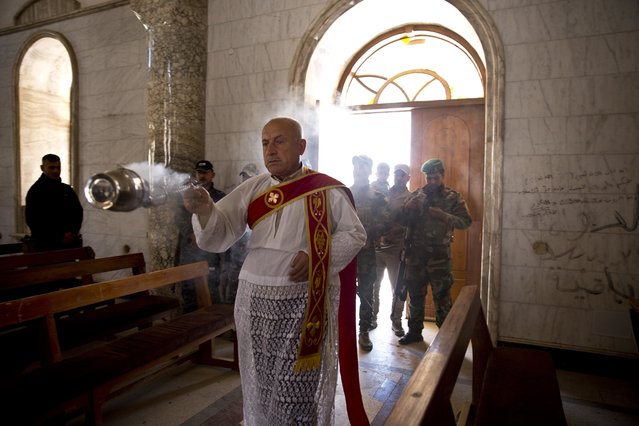 Christian militiamen stand guard during Easter mass in Qaraqosh, outside Mosul, Iraq, Sunday, April 16 2017. The town has been gutted by Islamic State militants. Now under government control, residents have not returned. (Photo by Maya Alleruzzo/AP Photo) 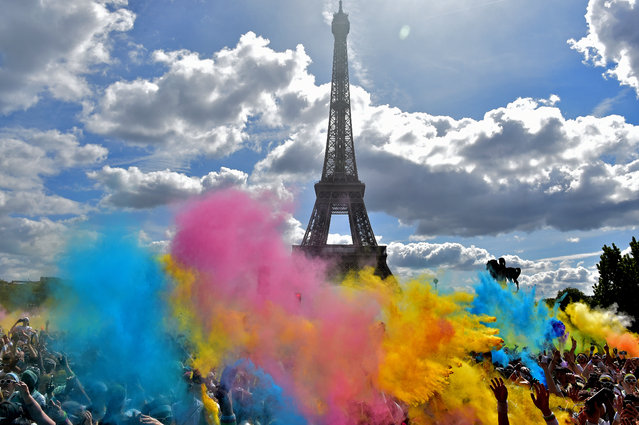 People take part in the Color Run 2017 's edition in front of the Eiffel Tower in Paris, on April 16, 2017. The Color Run is a five kilometres paint race without winners nor prizes, while runners are showered with colored powder at stations along the run. (Photo by Christophe Archambault/AFP Photo) 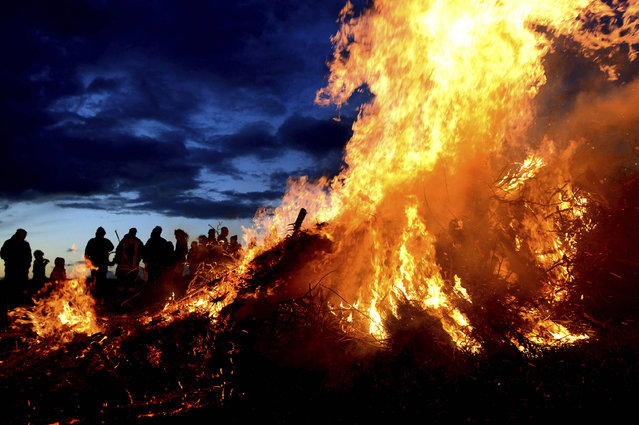