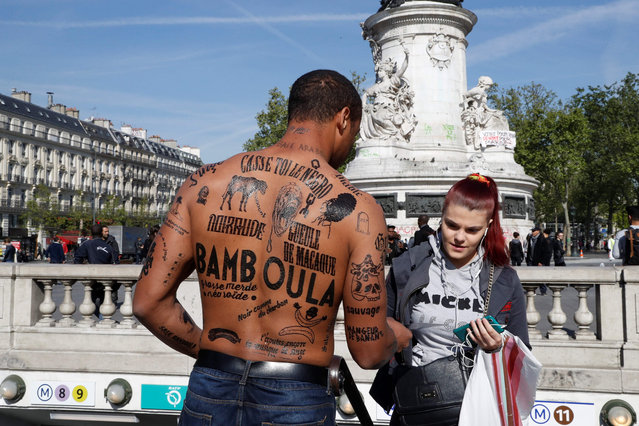 A man with his body covered with racist insults gives a flyer to a woman during an event organized by the Conseil Representatif des Associations Noires de France - CRAN (Representative Council of France' s Black Associations) to protest against racism, on the place de la Republique in Paris on April 24, 2017, one day after moderate candidate Emmanuel Macron won the first round of France' s presidential election and looked set to triumph in the run- off against far- right candidate Marine Le Pen next month. (Photo by Francois Guillot/AFP Photo) 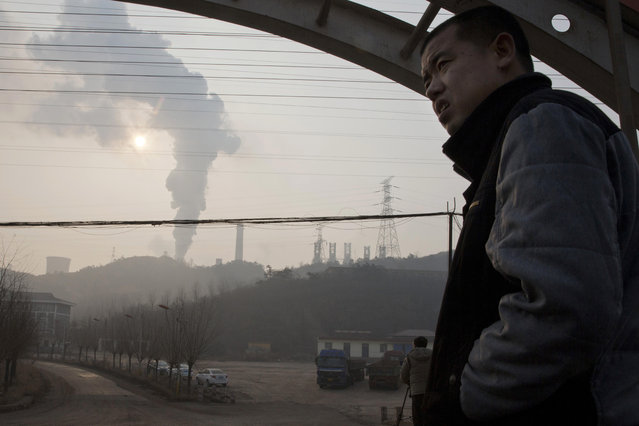 In this December 30, 2016 file photo, a man looks up near smoke spewing from a chimney near the Jiujiang steel and rolling mills in Qianan in northern China's Hebei province. Researchers say Tuesday, April 25, 2017 that China's conversion of coal into natural gas could prevent tens of thousands of premature deaths annually. But there's a catch: It also could undermine efforts to rein in greenhouse gas emissions. (Photo by Ng Han Guan/AP Photo) 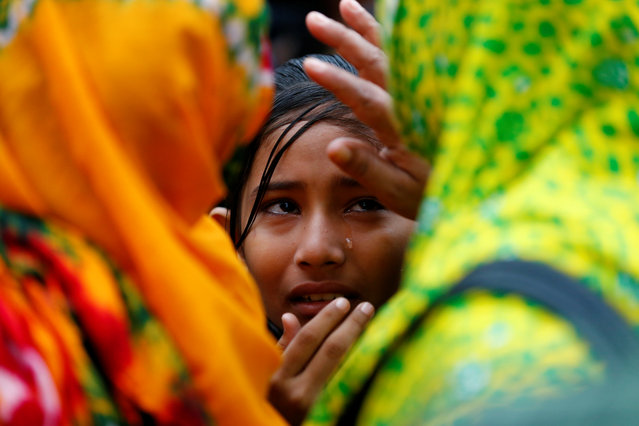 Relatives of victims killed in Rana Plaza building collapse in 2013, mourn at the site during the fourth anniversary of the collapse in Savar, on the outskirt of Dhaka, Bangladesh, April 24, 2017. (Photo by Mohammad Ponir Hossain/Reuters) 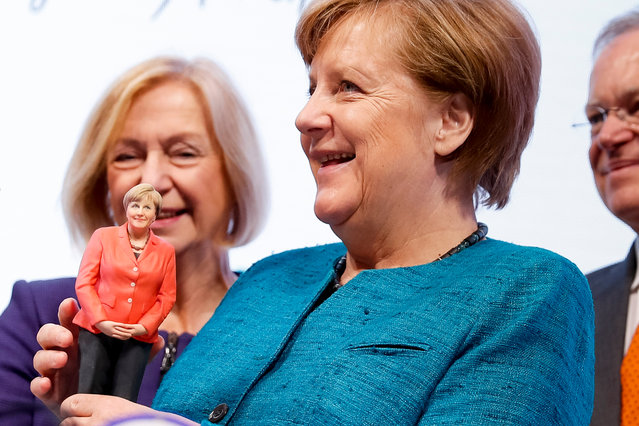 German Chancellor Angela Merkel (C) holds a sculpture according to her image from a 3D printer at the Siemens stand during the opening round trip at the Hannover Messe 2017 industrial trade fair in Hanover, northern Germany, 24 April 2017. Poland is the guest-country this year. The Hannover Messe (Hanover Fair) is the world's biggest industrial fair. The exhibition runs from 24 to 28 April 2017. (Photo by Carsten Koall/EPA) 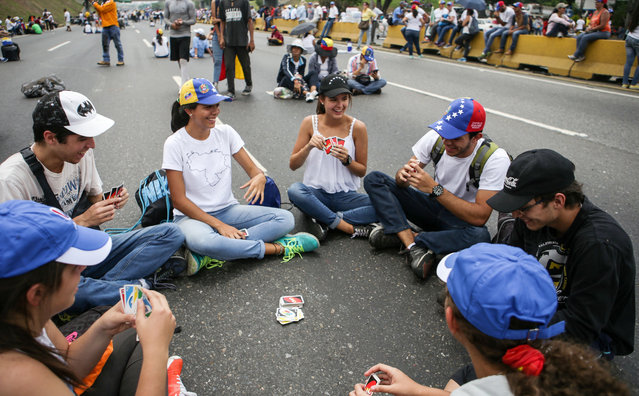 A group of people participate in a demonstration against the Venezuelan government in Caracas, Venezuela, 24 April 2017. Hundreds of Venezuelans in several cities of the country began to gather today for the protest called by the opposition and named “Venezuela is against the dictatorship” to demonstrate against the government of Nicolas Maduro. (Photo by Cristian Hernández/EPA) 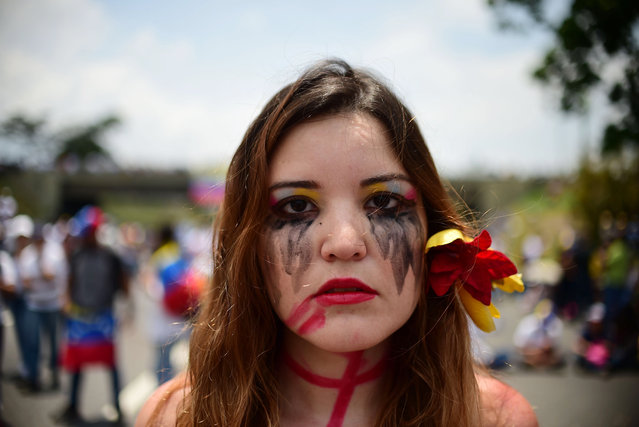 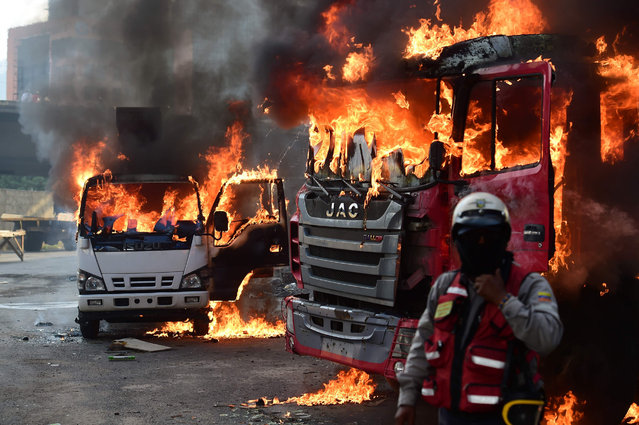 Trucks burn in flames during a demonstration by Venezuelan opposition activists against President Nicolas Maduro in Caracas, on April 24, 2017. Protesters rallied on Monday vowing to block Venezuela's main roads to raise pressure on Maduro after three weeks of deadly unrest that have left 21 people dead. Riot police fired rubber bullets and tear gas to break up one of the first rallies in eastern Caracas early Monday while other groups were gathering elsewhere, the opposition said. (Photo by Ronaldo Schemidt/AFP Photo) 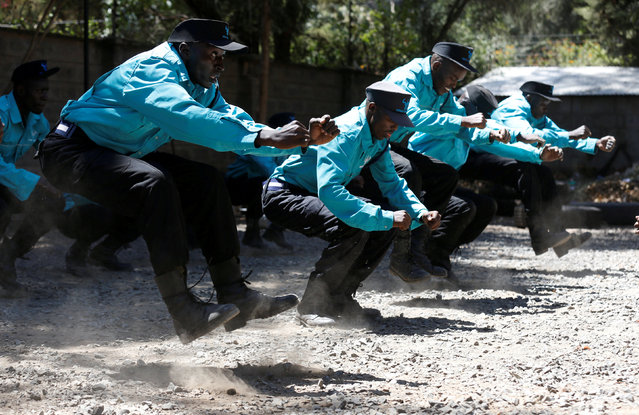 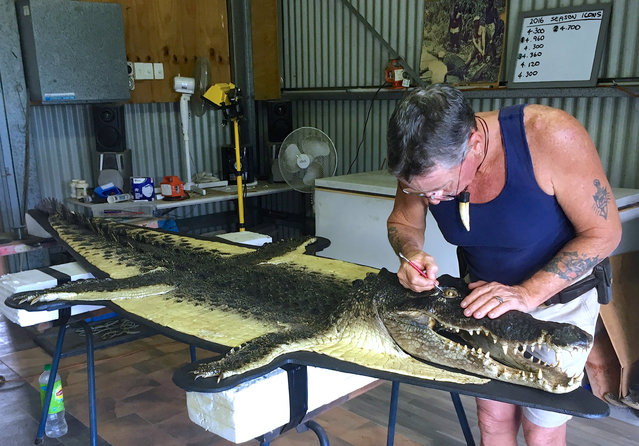 Mick Pitman, also known as “Crocodile Mick”, paints the eyes of a crocodile in his workshop in Howard Springs, located near the northern Australian city of Darwin, April 21, 2017. (Photo by Stefica Bikes/Reuters) 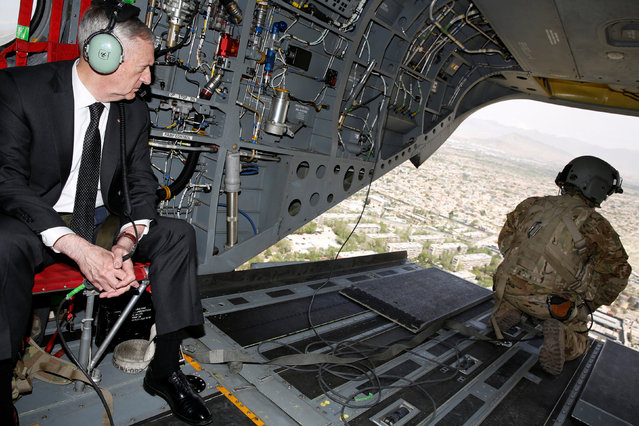 U.S. Defense Secretary James Mattis looks out over Kabul as he arrives via helicopter at Resolute Support headquarters in Kabul, Afghanistan April 24, 2017. (Photo by Jonathan Ernst/Reuters) 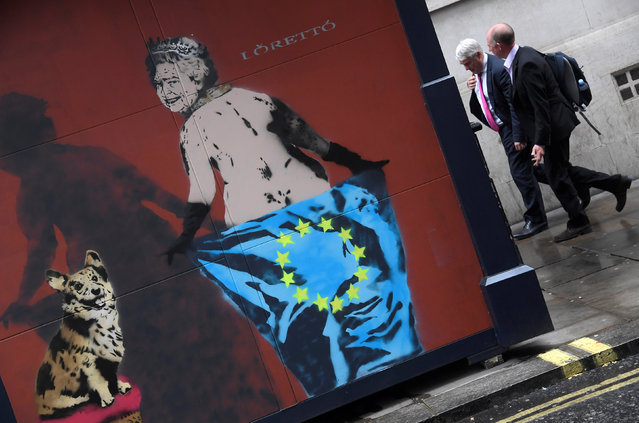 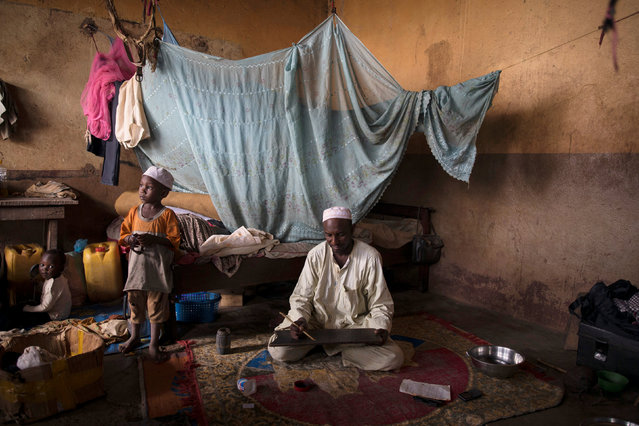 A man writes verses of the Quran on a wooden board at a displaced shelter in Bangui, Central African Republic, April 24, 2017. (Photo by Baz Ratner/Reuters) 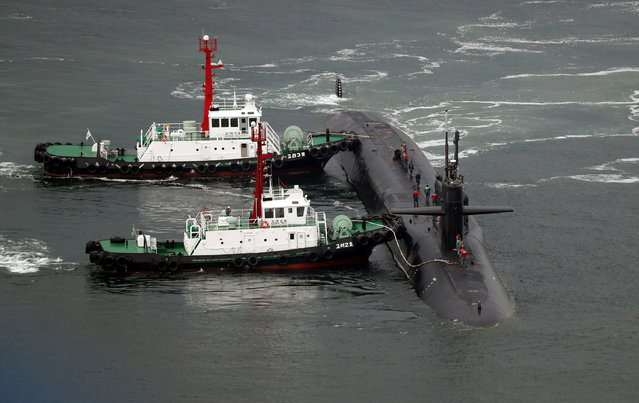 The USS Michigan, an Ohio-class nuclear-powered submarine, arrives at a naval base in Busan, South Korea, April 25, 2017. (Photo by Cho Jueong-ho/Reuters/Yonhap) Ivanka Trump listens while her father US President Donald Trump speaks via video with NASA astronauts aboard the International Space Station from the Oval Office of the White House April 24, 2017 in Washington, DC. (Photo by Brendan Smialowski/AFP Photo) 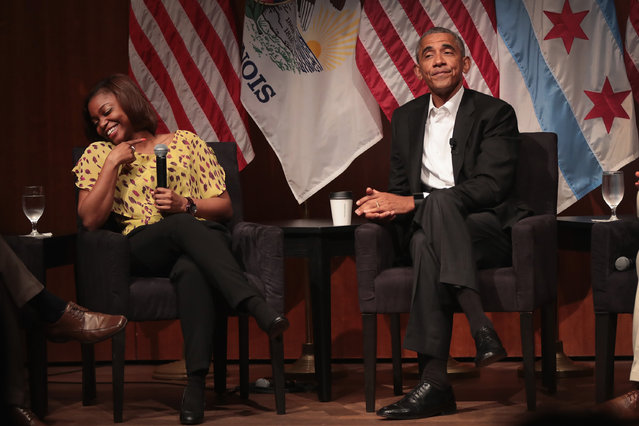 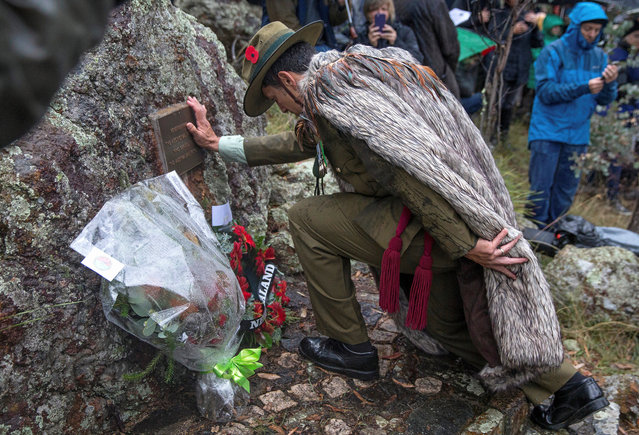 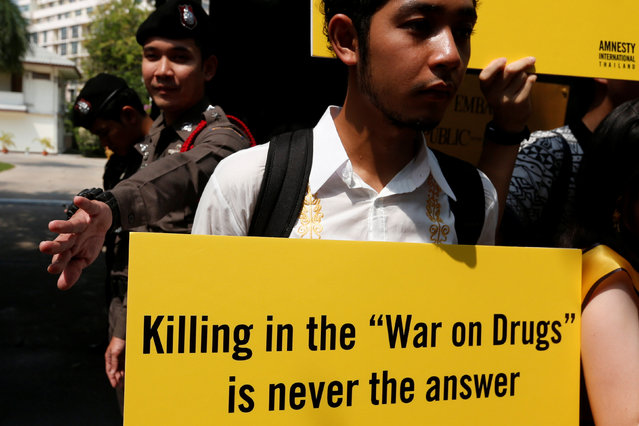 An activist from Amnesty International Thailand holds a banner during a rally to urge the Phillipines to stop “War on Drugs” in front of Philippines's embassy in Bangkok, Thailand, April 25, 2017. (Photo by Chaiwat Subprasom/Reuters) 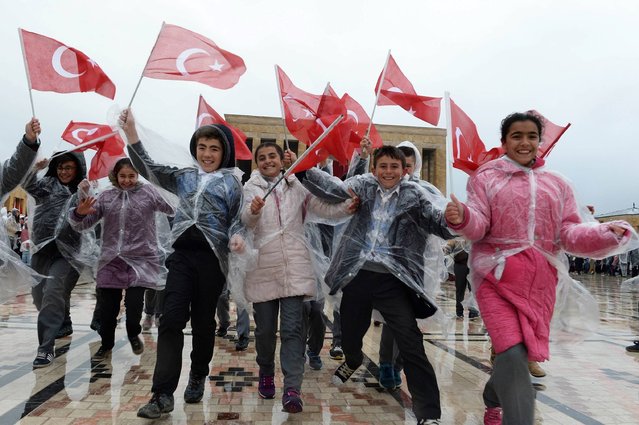 Children wave Turkish flags as they visit the mausoleum of Mustafa Kemal Ataturk, founder of modern Turkey, during a ceremony to mark the National Sovereignty and Children's Day in Ankara, on April 23, 2017. (Photo by Adem Altan/AFP Photo) 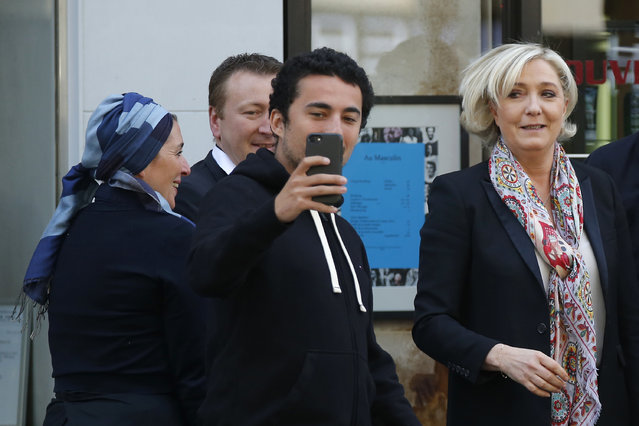 French far-right leader and candidate for the 2017 presidential election Marine Le Pen, right, poses for a photo after getting a haircut in Paris, Monday, April 24, 2017. France's political mainstream, shut out of the presidency by an angry electorate, united on Monday to call on voters to back centrist Emmanuel Macron and reject Marine Le Pen's populist nationalism. (Photo by Michel Euler/AP Photo) 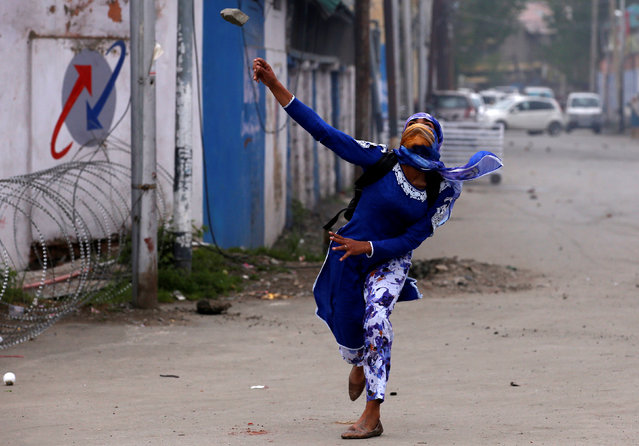 A student throws a rock towards Indian police during a protest in Srinagar, Indian controlled Kashmir, Monday, April 24, 2017. (Photo by Danish Ismail/Reuters) 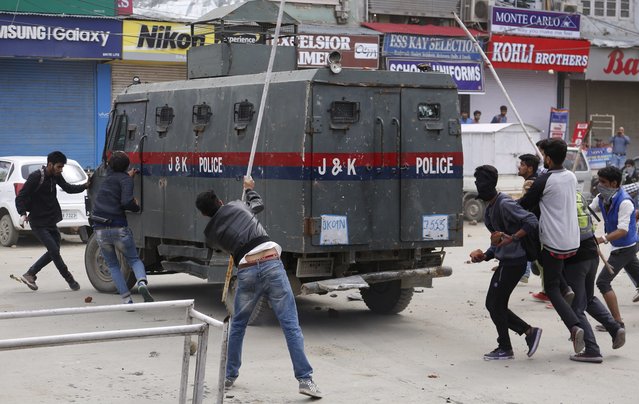 Kashmiri students and other protesters attack an Indian police vehicle as they clash in Srinagar, Indian controlled Kashmir, Monday, April 24, 2017. Tensions between Kashmiri students and Indian law enforcement have escalated since April 15, when government forces raided a college in Pulwama, about 30 kilometers (19 miles) south of Srinagar, to scare anti-India activists. (Photo by Mukhtar Khan/AP Photo) 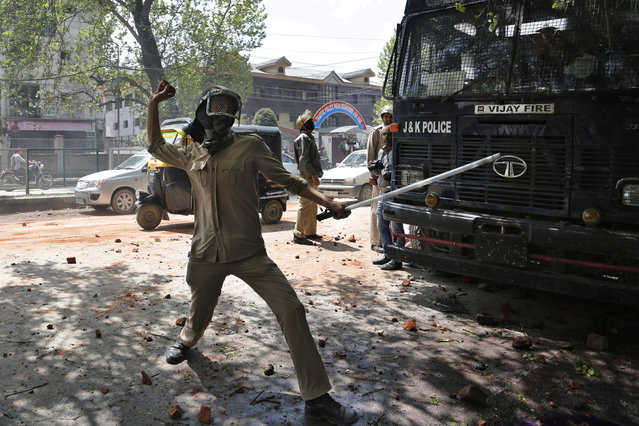 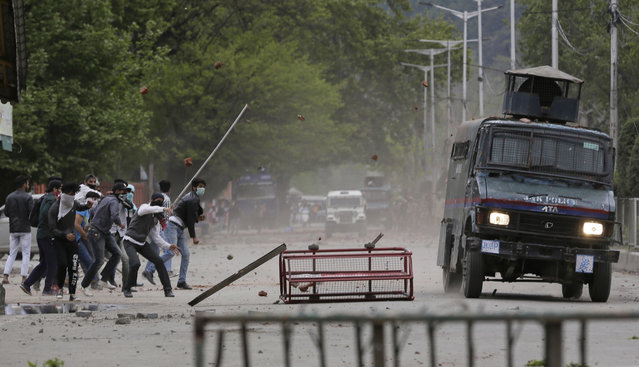 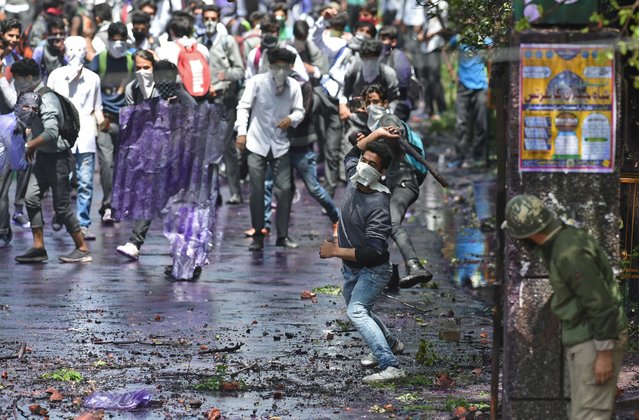 Kashmiri students clash with Indian government forces in central Srinagar's Lal Chowk on April 24, 2017. Police fired into a crowd of stone-throwing students in Indian Kashmir on April 24, as violence in the disputed region intensified. Hundreds of student protesters shouted “We want freedom” and “Go India, go back” as they clashed with government forces after taking to the streets of the main city Srinagar. (Photo by Tauseef Mustafa/AFP Photo) 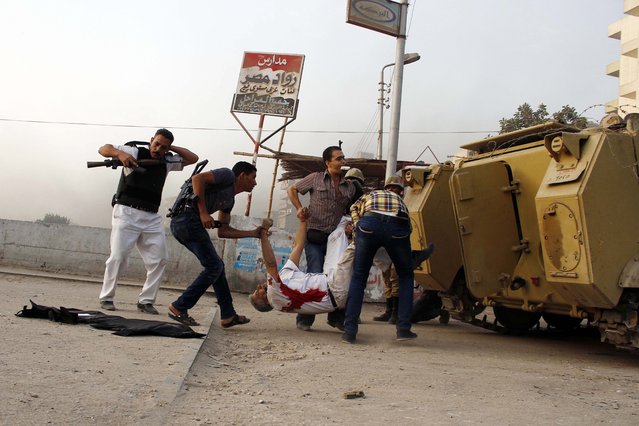 In this September 19, 2013 file photo, Egyptian security forces carry the lifeless body of Giza Police Gen. Nabil Farrag, center, who was killed after unidentified militants opened fire on security forces in the town of Kerdasa, Egypt. An Egyptian court on Monday, April 24, 2017 upheld death sentences against 20 suspected Islamists convicted of murder in the deaths of 15 people, including 11 police, during the attack in 2013. The ruling by the Cairo Criminal Court awaits approval by the grand mufti, the country's highest Islamic authority, and a final verdict will be delivered on June 2. (Photo by Ahmed Abdel Fattah/AP Photo/El Shorouk Newspaper) 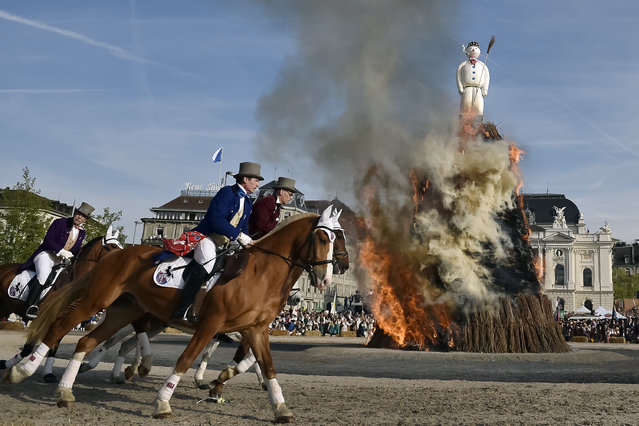 Members of a guild ride around the Boeoegg, a giant symbolic snowman made of wadding and and filled with firecrackers burning on top of a bonfire in Sechselaeuten square on April 24, 2017 in Zurich. When the bells of the Saint Peter's church chime six o'clock, the bonfire under the snowman is set in fire and the guildsmen wearing historical costumes ride around the bonfire. The faster the head of the snowman explods the warmer and more beautiful the summer will be. (Photo by Michael Buholzer/AFP Photo) 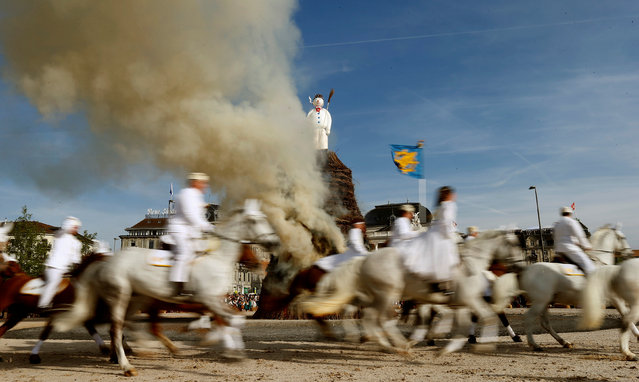 Mounted guildsmen gallop around the Boeoegg, a snowman made of wadding and filled with firecrackers, as it burns atop a bonfire in the Sechselaeuten square in Zurich, Switzerland April 24, 2017. (Photo by Arnd Wiegmann/Reuters) 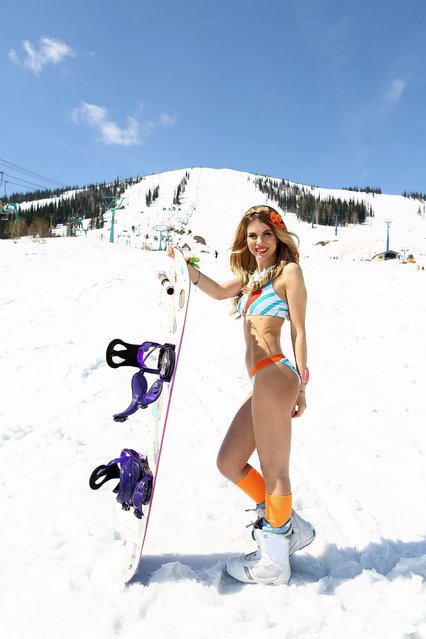 Participants in the Grelka Fest at the Sheregesh resort in Tashtagolsky District of Kemerovo Oblast, Russia on April 22, 2017. Russian girls marked the end of the ski season with a record-breaking bikini ski festival at Siberia’s top winter resort, Sheregesh. Some 1,498 skiers and snowboarders undressed to impress in the annual event as they took to the pistes under blues skies and sunshine in a bracing temperature of just 5°C. (Photo by Grelka Fest/The Siberian Times) 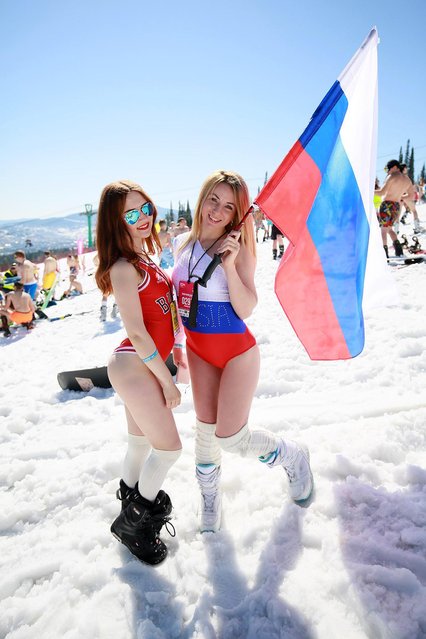 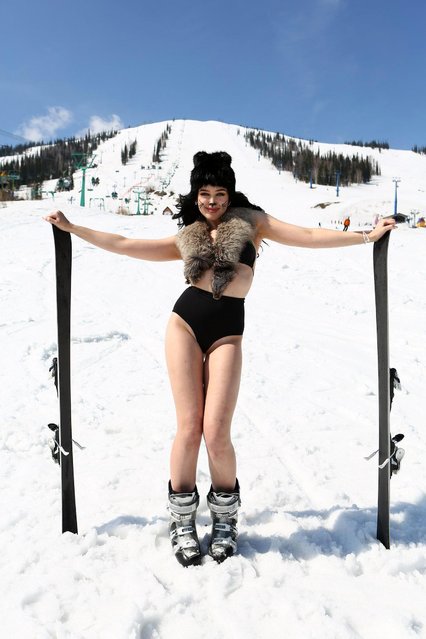