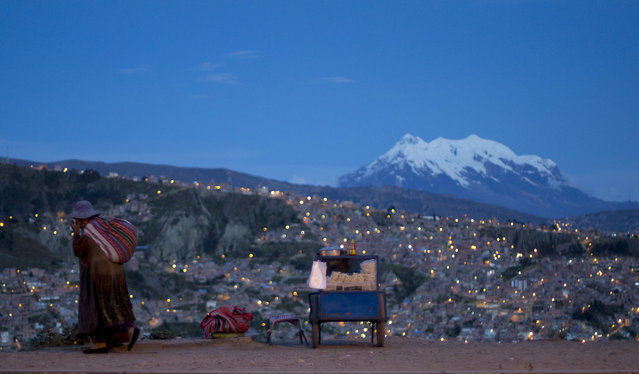 A woman walks along Pereferica Avenue, past a street stall of popcorn, known as “pipocas”, backdropped by the snow-capped Illimani Mountain, at sunset in La Paz, Bolivia, Tuesday, April 24, 2018. Illimani is part of the Cordillera Real in the Andes of South America. (Photo by Juan Karita/AP Photo) 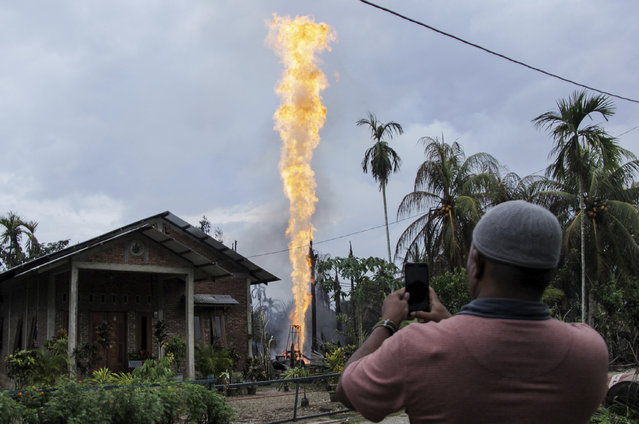 A man uses his mobile phone to take pictures of a burning oil well after it was caught fire in Pasir Putih village in eastern Aceh, Indonesia, Wednesday, April 25, 2018. The newly drilled, unregulated oil well in western Indonesia exploded into flames early Wednesday, burning to death a number of people and injuring dozens of others. (Photo by Zik Maulana/AP Photo) 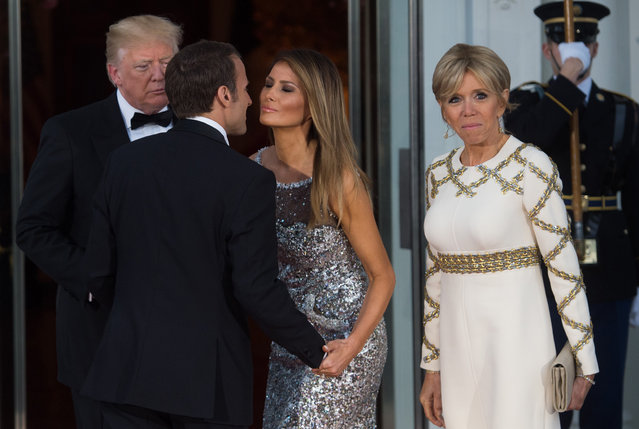 US President Donald Trump and First Lady Melania Trump welcome French President Emmanuel Macron and his wife, Brigitte Macron, as they arrive for a State Dinner at the North Portico of the White House in Washington, DC, April 24, 2018. (Photo by Saul Loeb/AFP Photo) 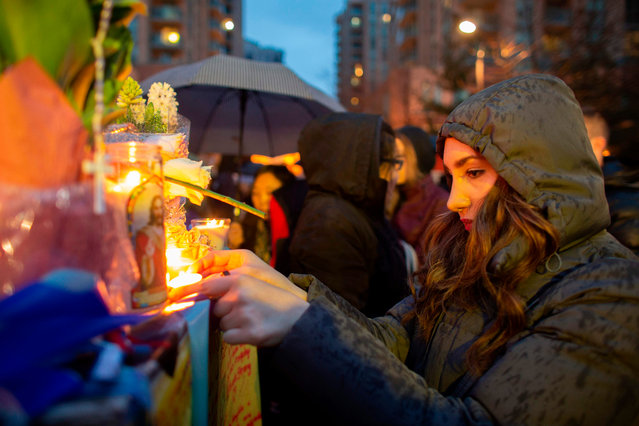 A woman lights a candle during a vigil April 24, 2018 in Toronto, Canada, near the site of the previous day' s deadly street van attack. A van driver who ran over 10 people when he plowed onto a busy Toronto sidewalk was charged with murder Tuesday, as Canadian Prime Minister Justin Trudeau urged a rattled nation not to live in fear after the “senseless attack”. Police said the suspect, 25- year- old Alek Minassian, was not known to them before Monday's carnage in Canada's most populous city, which also left 15 people injured. (Photo by Geoff Robins/AFP Photo) 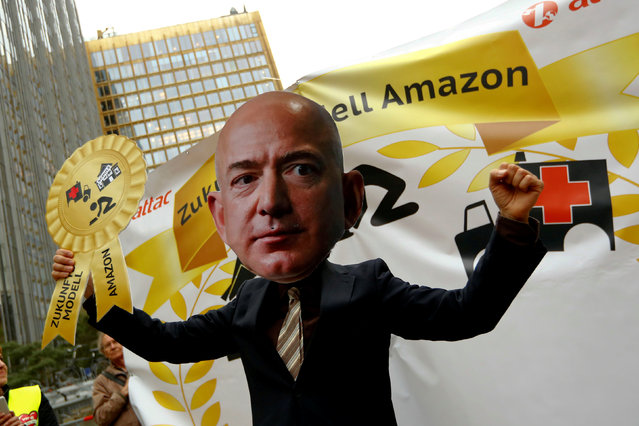 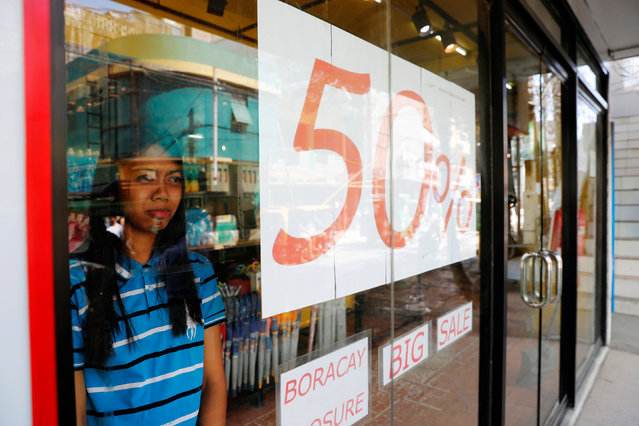 A saleswoman looks out from a glass window of a clothing store, a day before the temporary closure of the holiday island Boracay in the Philippines April 25, 2018. (Photo by Erik De Castro/Reuters) 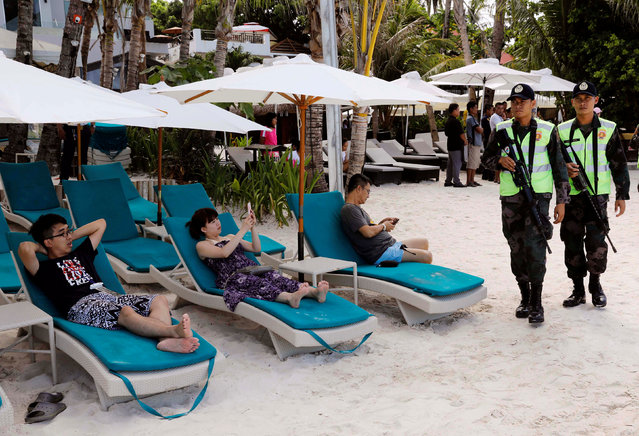 Policemen walk past tourists, one day before the temporary closure of the holiday island Boracay, in the Philippines April 25, 2018. (Photo by Erik De Castro/Reuters) 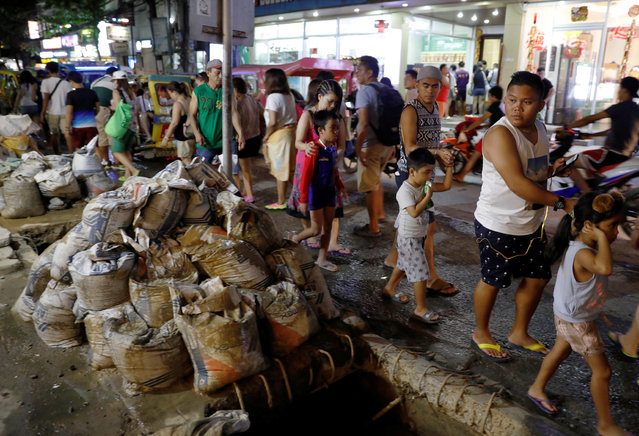 People walk past a clogged sewer and uncollected sacks containing waste from the sewers along a road at Boracay in Philippines April 9, 2018. (Photo by Erik De Castro/Reuters) 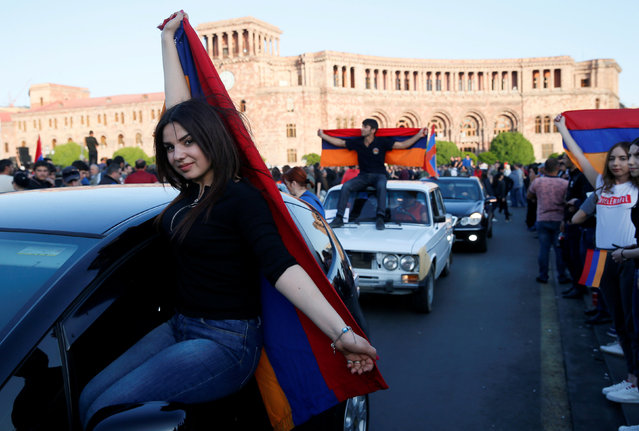 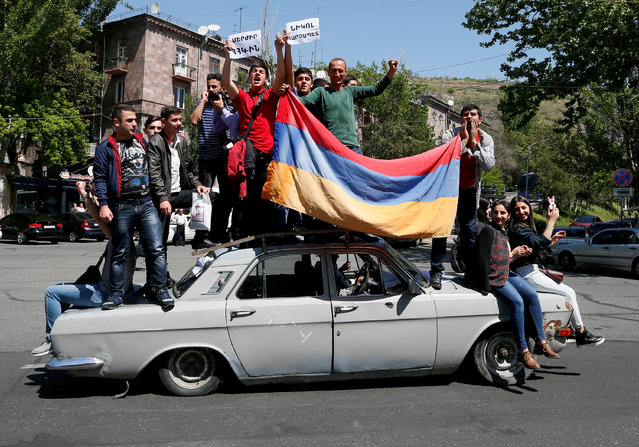 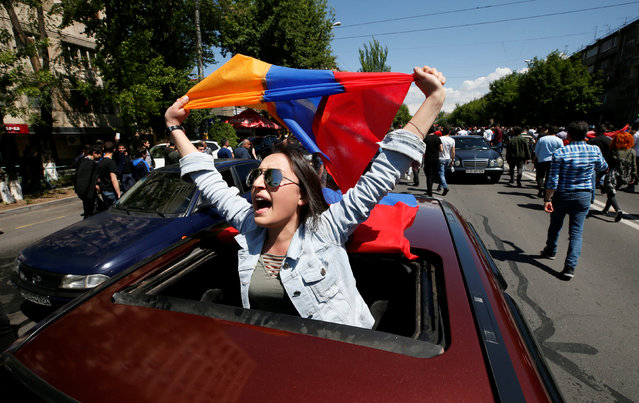 A supporter holds up the national flag during a rally to support the opposition leader, Nikol Pashinyan in Yerevan, Armenia on April 25, 2018. (Photo by Gleb Garanich/Reuters) 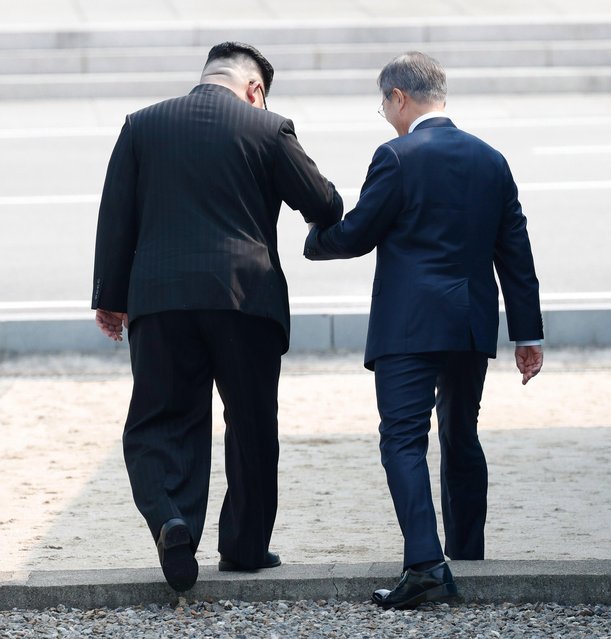 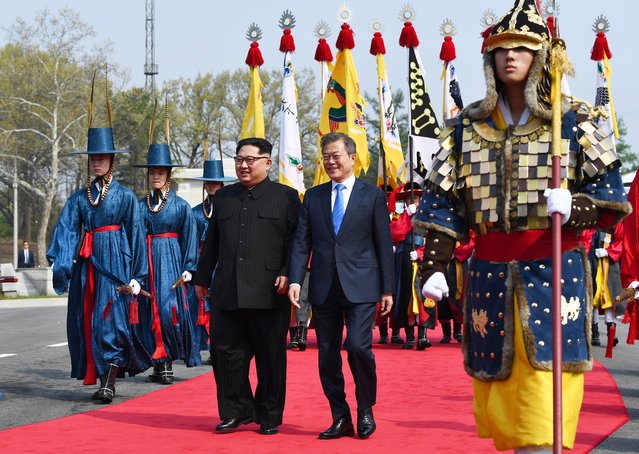 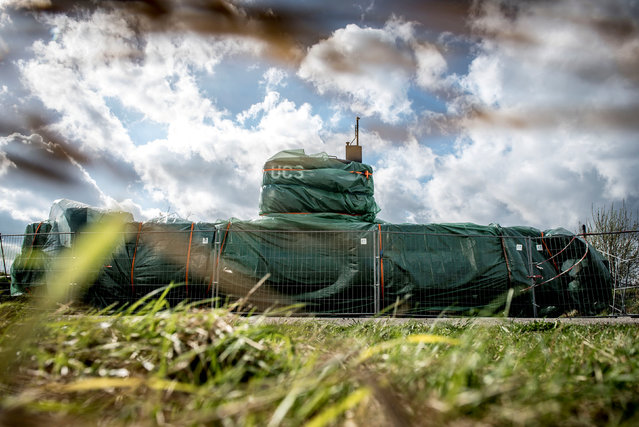 The submarine UC3 Nautilus is seen covered with green tarpaulin in Nordhavn, in Copenhagen, Denmark, April 25, 2018. Danish inventor Peter Madsen has been sentenced to life in prison for torturing and murdering Swedish journalist Kim Wall on his private submarine, it was also decided by the court that the submarine “UC3 Nautilus” must be confiscated. (Photo by Mads Claus Rasmussen/Reuters/Ritzau Scanpix) 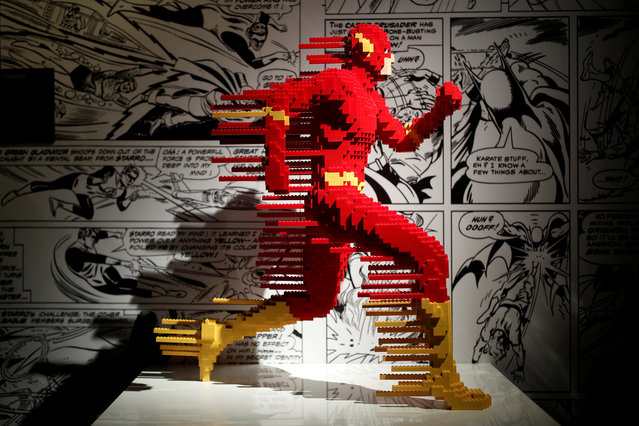 The art work Flash Forward made of Lego bricks is pictured during the media preview of the exhibition The Art of the Brick: DC Super Heroes by U.S. artist Nathan Sawaya at Paris's Parc de la Villette in Paris, France, April 26, 2018. (Photo by Benoit Tessier/Reuters) 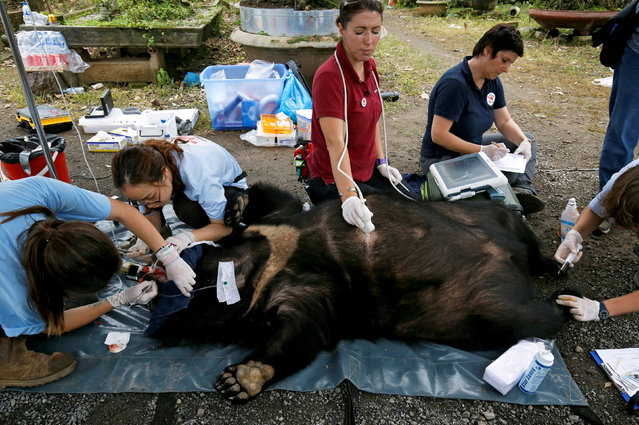 Veterinarians of Four Paws animals welfare charity, check May, a female moon bear, during her rescue from a bear farm for bile trading to a bear sanctuary, an animal welfare project by Four Paws in Ninh Binh province, Vietnam April 26, 2018. (Photo by Reuters/Kham) 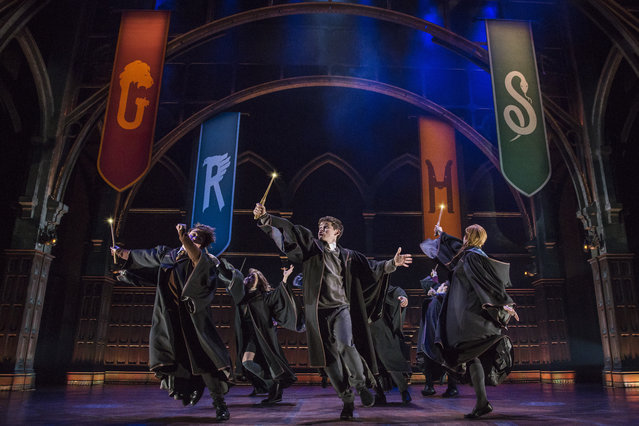 This image released by Boneau/Bryan-Brown shows a scene from the production of “Harry Potter and the Cursed Child”, in New York. Three of the plays this spring require an uncommon amount of attention. Two parts of “Angels in America” clock in at a total of eight hours, the two parts of “Harry Potter and the Cursed Child” are more than a combined five hours and the revival of “The Iceman Cometh” is just under four hours. (Photo by Matthew Murphy/Boneau/Bryan-Brown via AP Photo) 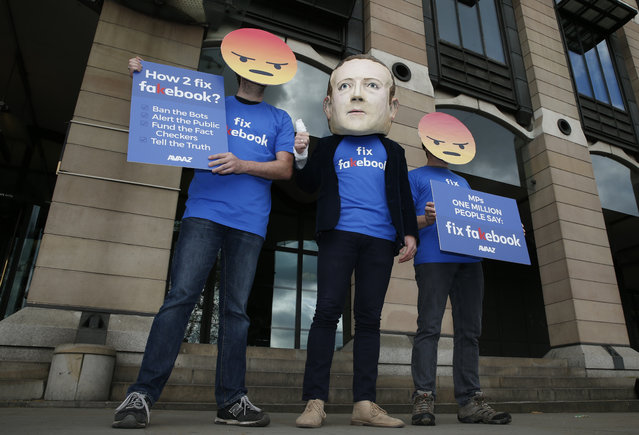 A protester wearing a mask with the face of Facebook founder Mark Zuckerberg, in between men wearing angry face emoji masks, during a protest against Facebook outside Portcullis in London, Thursday, April 26, 2018, as the Chief Technical Officer of Facebook Mike Schroepfer is due to give evidence on the companies use of data from its customers in front of a Parliamentary Select Committee. (Photo by Alastair Grant/AP Photo) 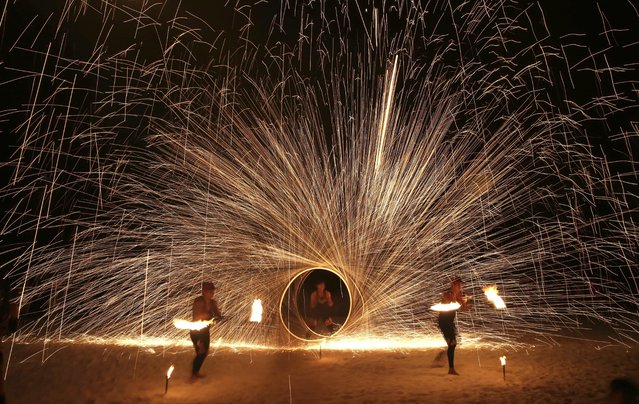 Filipino fire dancers perform for the last time a day before the government implements the temporary closure of the country's most famous beach resort island of Boracay, in central Aklan province, Philippines, on Wednesday, April 25, 2018. Tourists are spending their final hours on Boracay, enjoying the Philippine island's famed white-sand beaches before it closes for up to six months to recover from overcrowding and development. (Photo by Aaron Favila/AP Photo) 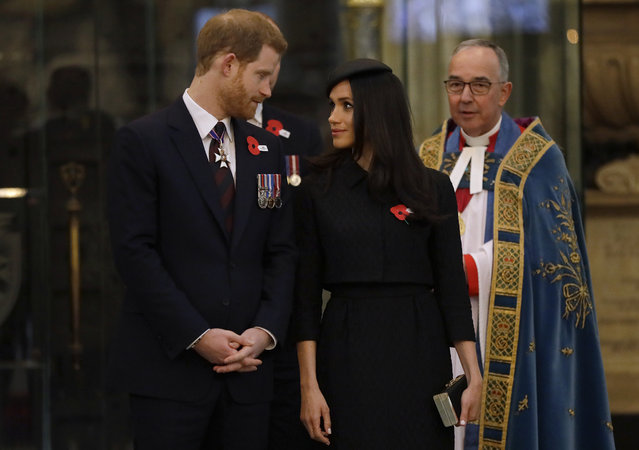 Britain's Prince Harry and Meghan Markle arrive to attend a Service of Thanksgiving and Commemoration on ANZAC Day at Westminster Abbey in London, Wednesday, April 25, 2018. (Photo by Kirsty Wigglesworth/AP Photo) 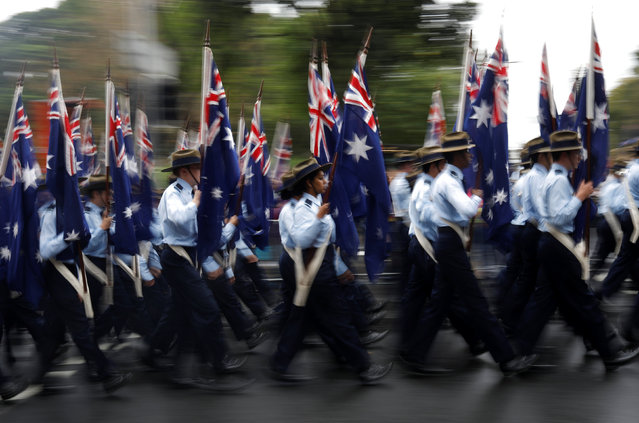 A contingent of flag bearers marches past during an Anzac Day parade in Sydney, Australia April 25, 2018. (Photo by Edgar Su/Reuters) 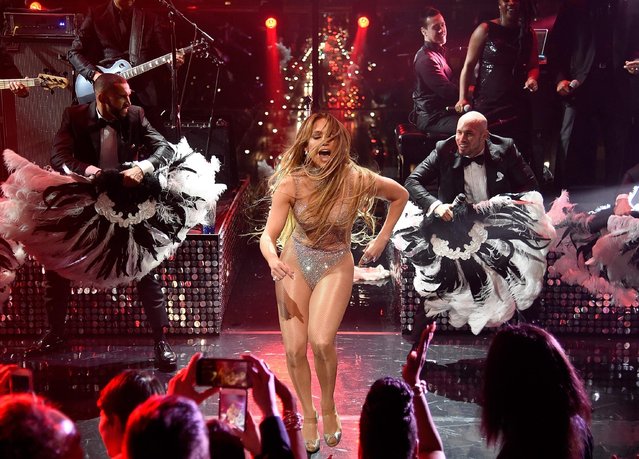 Jennifer Lopez performs on stage during the 2018 Time 100 Gala at Jazz at Lincoln Center on April 24, 2018 in New York City. (Photo by Kevin Mazur/Getty Images for Time) 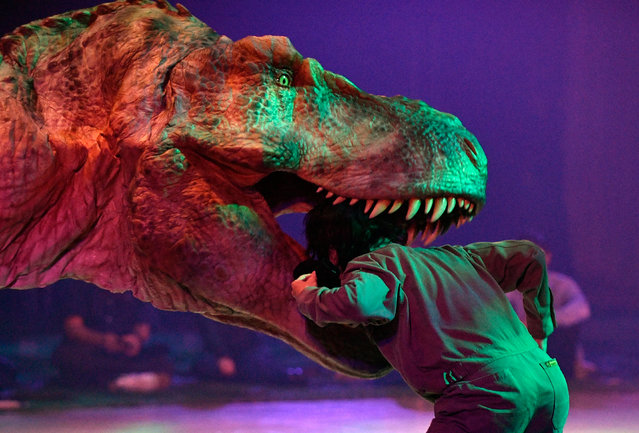 Actors perform in a scene during the “Dino Safari” show in Tokyo, Japan, 25 April 2018. The Dino Safari show features dinosaurs moving in a realistic way thanks to the Dino-Tronics mechanism that enable the dinosaurs to walk, move their heads and jaws. The event will run from 26 April to 05 May 2018. (Photo by Franck Robichon/EPA/EFE)
Edit Del
27 Apr 2018 05:35:00, post received 0 comments
Publication archive:
←   →
Popular tags:
All tags
Last searches: