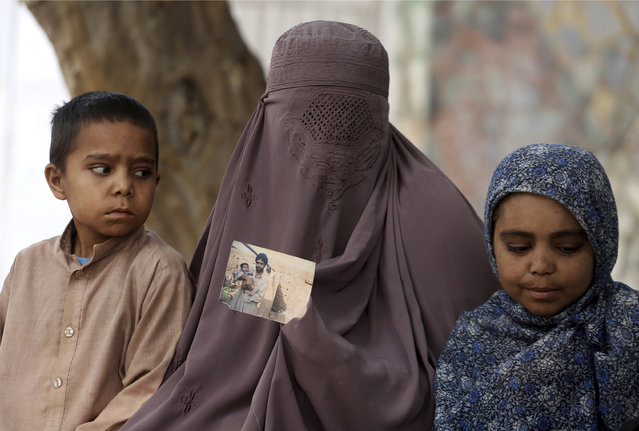 In this Thursday, April 19, 2018 photo, Bashro Bibi, a mother of five shows picture of her missing husband in Peshawar, Pakistan. A Pakistani rights group in the country's troubled border region has been protesting police brutality, censorship and disappearances, drawing a police campaign against its members and deepening tensions. (Photo by Muhammad Sajjad/AP Photo) 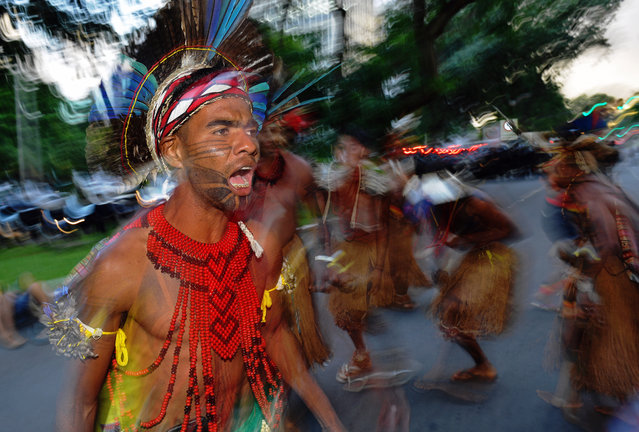 Brazilian indigenous men perform a ritual dance during a protest against the government's decision not to recognize the land demarcation of indigenous people living in Raposa Serra do Sol, Roraima State, in Brasilia, on April 25, 2018. About 2,500 indigenous people from different tribes are taking part in the Indigenous National Mobilization (MNI) week – a mobilization which seeks to tackle territorial rights' negotiations with the government. (Photo by Carl De Souza/AFP Photo) 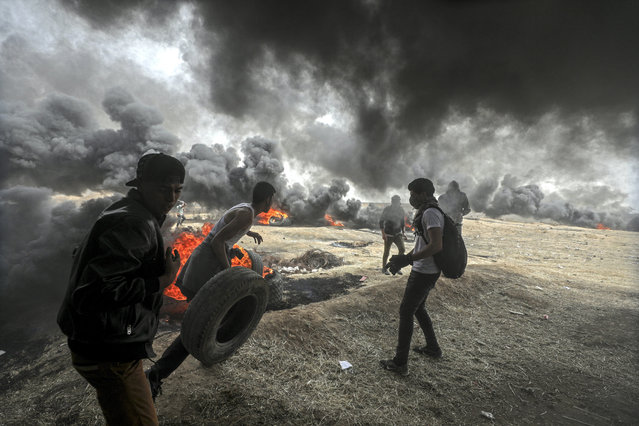 Palestinians protesters during clashes near the border with Israel in the east of Gaza City, 20 April 2018. According to reports, Two Palestinians youths protesters were killed by Israeli bullets and more than 120 others wounded during the clashes near the border between Israel and Gaza Strip. Protesters plan to call for the right of Palestinian refugees across the Middle East to return to homes they fled in the war surrounding the 1948 creation of Israel. (Photo by Mohammed Saber/EPA/EFE) 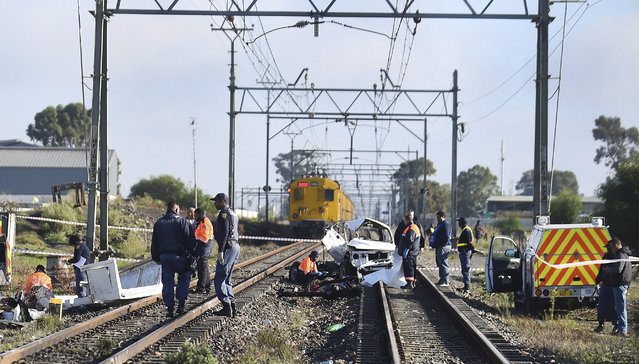 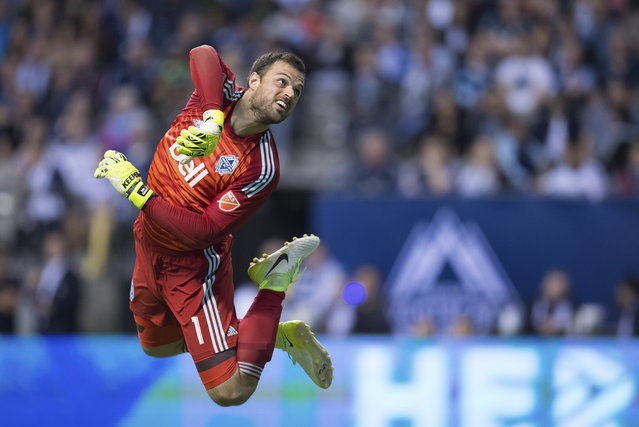 Vancouver Whitecaps goalkeeper Stefan Marinovic watches the ball after making a save against Real Salt Lake during the first half of an MLS soccer match Friday, April 27, 2018, in Vancouver, British Columbia. (Photo by Darry Dyck/The Canadian Press via AP Photo) 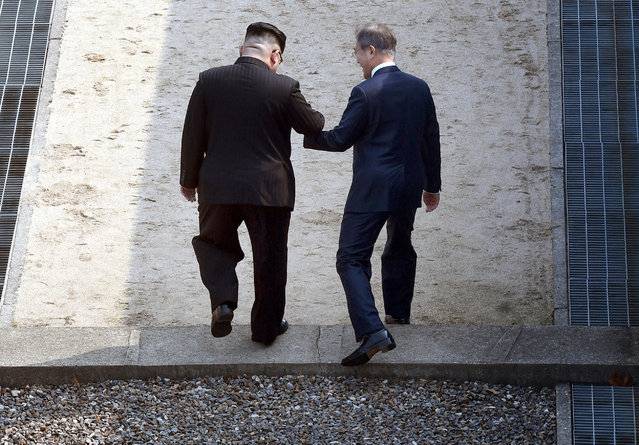 North Korean leader Kim Jong Un, left, and South Korean President Moon Jae-in cross the military demarcation line at the border village of Panmunjom in Demilitarized Zone Friday, April 27, 2018. Their discussions will be expected to focus on whether the North can be persuaded to give up its nuclear bombs. (Photo by Korea Summit Press Pool via AP Photo) 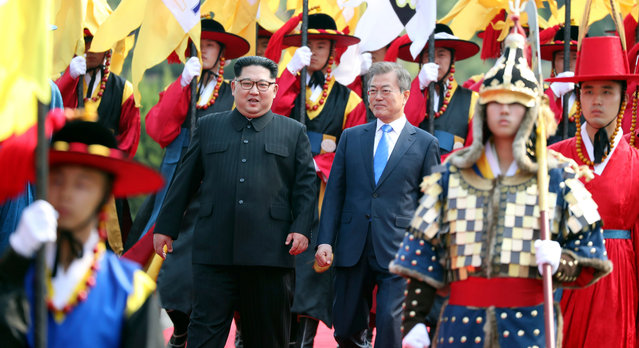 In this Friday, April 27, 2018, file photo, North Korean leader Kim Jong Un, left, and South Korean President Moon Jae-in, right, walk together through a honor guard at the border village of Panmunjom in the Demilitarized Zone. After their meeting at the borderline, Kim and Moon moved to a small plaza to inspect an honor guard before they walked together for a couple of minutes to Peace House, the venue for the summit. (Photo by Korea Summit Press Pool via AP Photo) 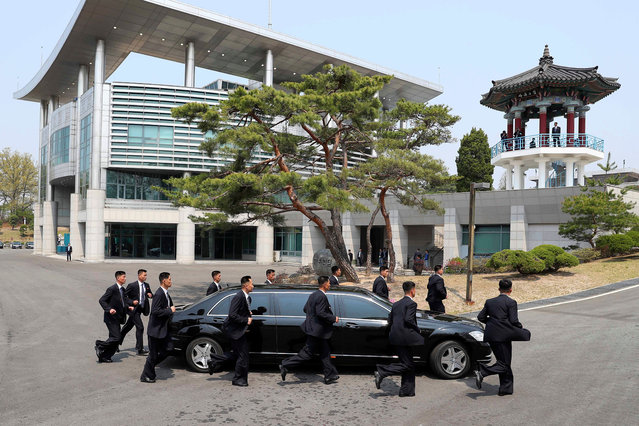 North Korean security persons run by a car carrying North Korean leader Kim Jong Un return to the North side for a lunch break after a morning session of a summit meeting with South Korean President Moon Jae-in at the border village of Panmunjom in Demilitarized Zone Friday, April 27, 2018. (Photo by Korea Summit Press Pool via AP Photo) 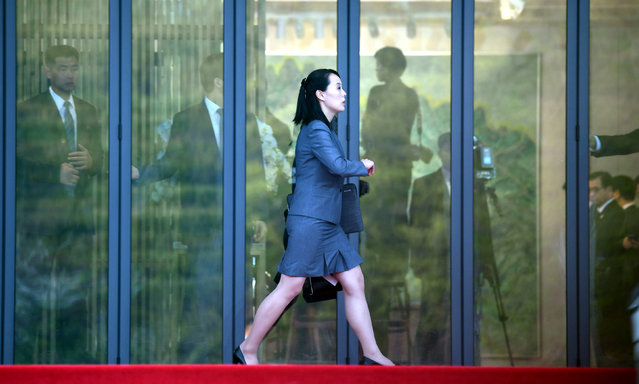 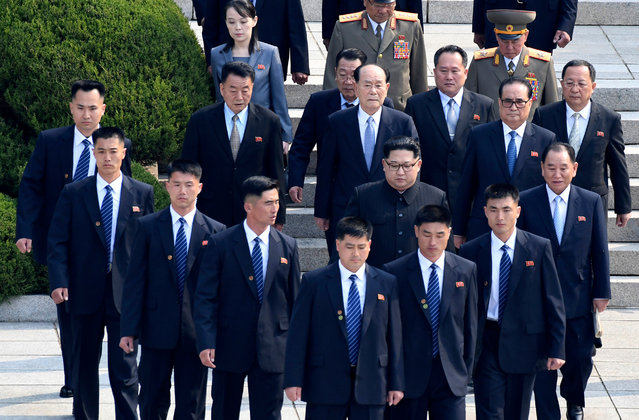 North Korean leader Kim Jong Un, center, is surrounded by his security guards upon his arrival for a meeting with South Korean President Moon Jae-in at the North Korea side of Panmunjom in the Demilitarized Zone, South Korea, Friday, April 27, 2018. (Photo by Korea Summit Press Pool via AP Photo) 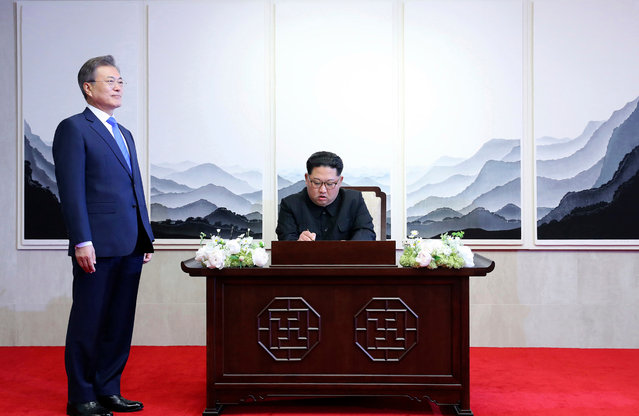 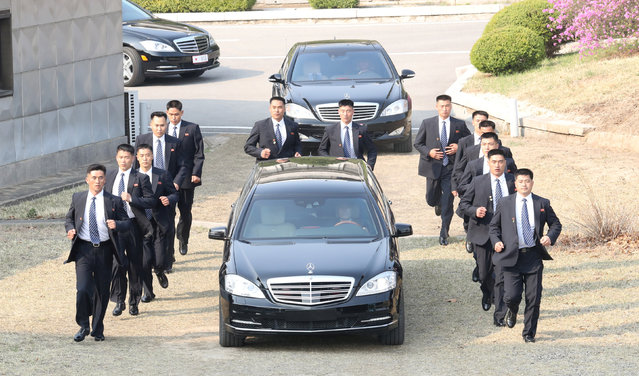 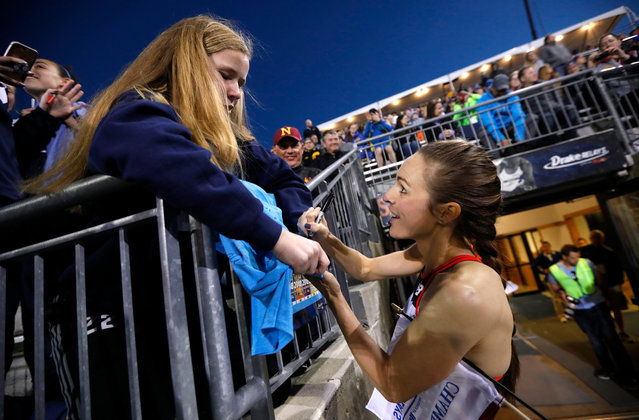 Jenny Simpson signs an autograph for a fan as she leaves the track after winning the women's special 2-mile run at the Drake Relays athletics meet Friday, April 27, 2018, in Des Moines, Iowa. (Photo by Charlie Neibergall/AP Photo) 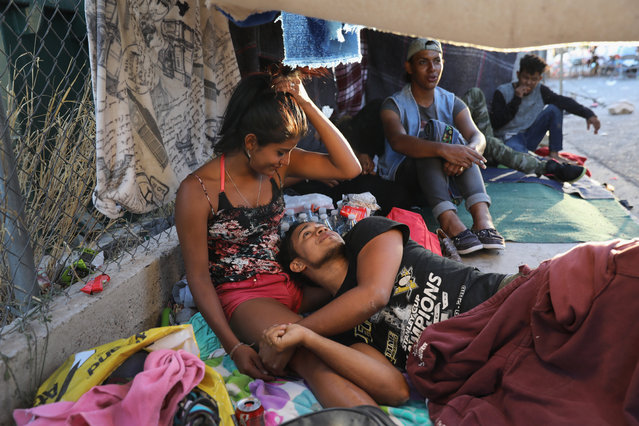 Honduran immigrants rest at a shelter while on their journey to the U.S.-Mexico border on April 22, 2018 in Hermosillo, Mexico. Some 600 immigrants, part of a caravan of mostly Central Americans that began almost a month ago, is within days of reaching the border. Traveling together, many atop freight trains known as the "beast," they have sought safety in numbers on the dangerous journey. Along the way, they have received an outpouring of help from local charities, the Mexican Red Cross, private citizens and government officials. U.S. President Donald Trump sent National Guard troops to border regions in response to the caravan, although many in the group are families who plan to seek political asylum the U.S. (Photo by John Moore/Getty Images) 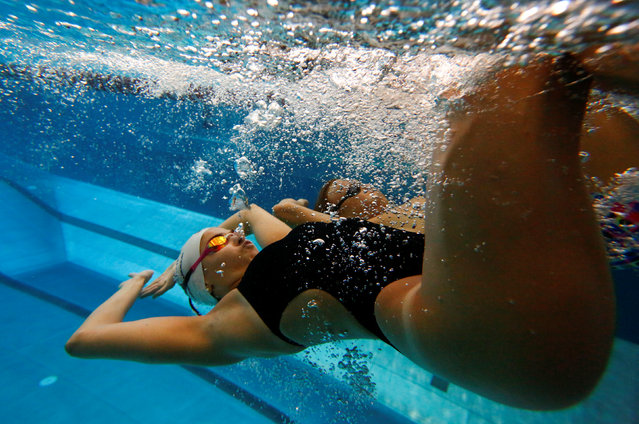 Syrian refugee and Olympic swimmer Yusra Mardini is pictured during a training session in a pool at the Olympic park in Berlin, Germany on April 26, 2018. (Photo by Fabrizio Bensch/Reuters) 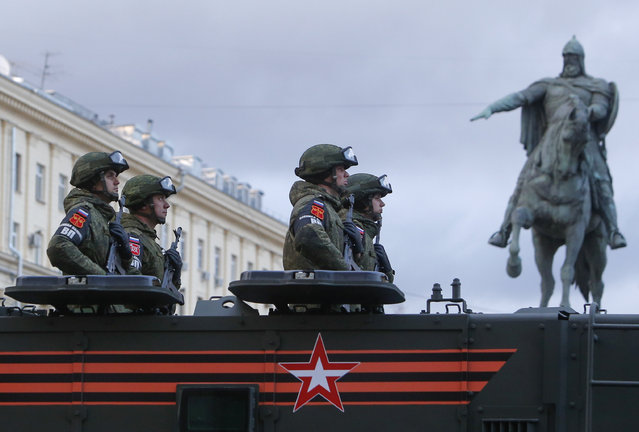 Russian servicemen are seen onboard a military vehicle in Tverskaya Street near the monument to Prince Yuri Dolgoruky before the rehearsal for the Victory Day parade in central Moscow, Russia April 26, 2018. (Photo by Tatyana Makeyeva/Reuters) 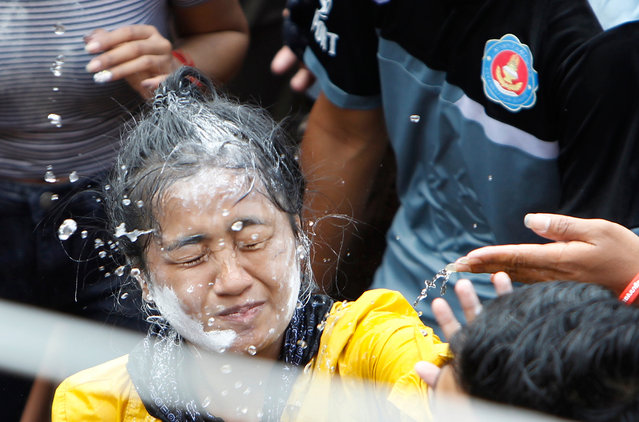 A girl is painted her face as she gets the holy water poured on her by her friends to mark the end of the Khmer New Year on the outskirts of Phnom Penh, Cambodia, Sunday, April 22, 2018. Buddhist followers received the holly water which is believed to bring good luck. (Photo by Heng Sinith/AP Photo) 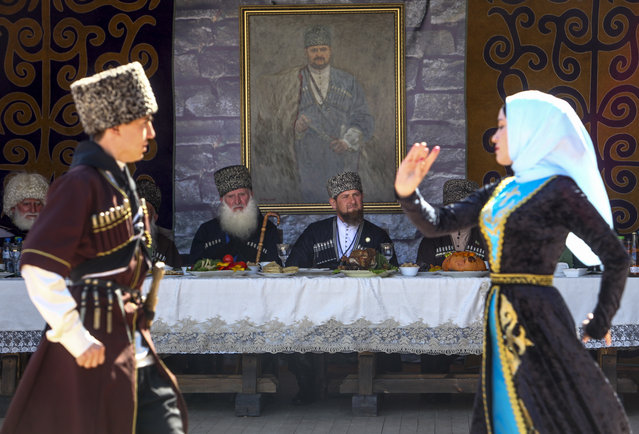 Chechen regional leader Ramzan Kadyrov, background center, dressed in national costume, looks at Chechen dancers during a celebrations of a Day of the Chechen language holiday in Chechnya's provincial capital Grozny, Russia, Wednesday, April 25, 2018. In the back is a portrait of his father Akhmad Kadyrov, the Chechen president who was assassinated in a 2004 bomb blast. (Photo by Musa Sadulayev/AP Photo) 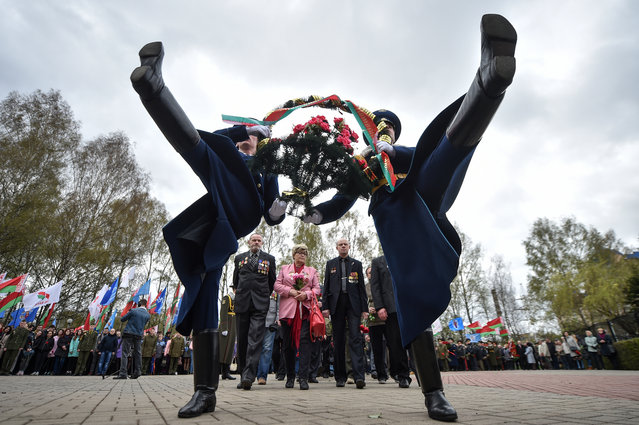 Honour guard soldiers lay flowers at the Chernobyl victims' memorial in Minsk on April 26, 2018. The world marks 32 years since the world's worst nuclear accident at Chernobyl killed thousands and forced a global rethink about the wisdom of relying on atomic fuel. (Photo by Sergei Gapon/AFP Photo) 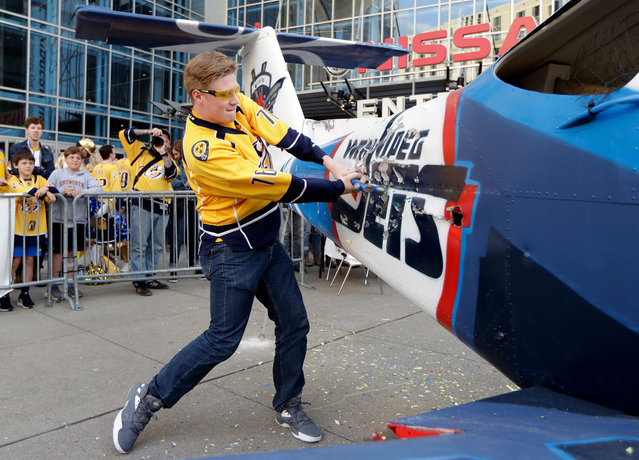 Nashville Predators fan Devin Bradshaw takes a turn beating on a plane painted with the Winnipeg Jets logo and colors outside of Bridgestone Arena before Game 1 of an NHL hockey second-round playoff series between the Predators and the Jets, Friday, April 27, 2018, in Nashville, Tenn. (Photo by Mark Humphrey/AP Photo) 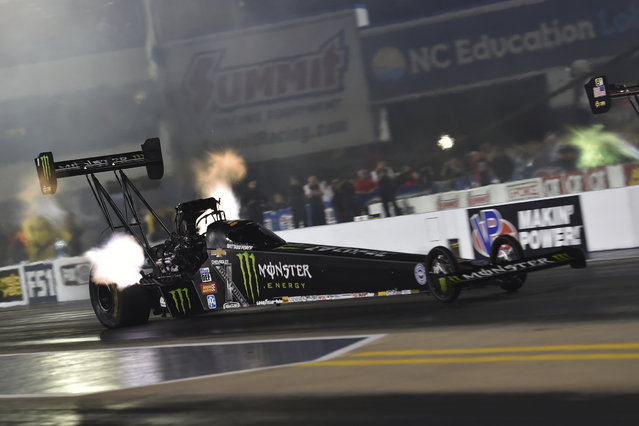 In this photo provided by the NHRA, Brittany Force drives in Top Fuel qualifying for the NHRA Four-Wide Nationals drag races at zMAX Dragway on Friday, April 27, 2018, in Concord, N.C. (Photo by Teresa Long/NHRA via AP Photo) 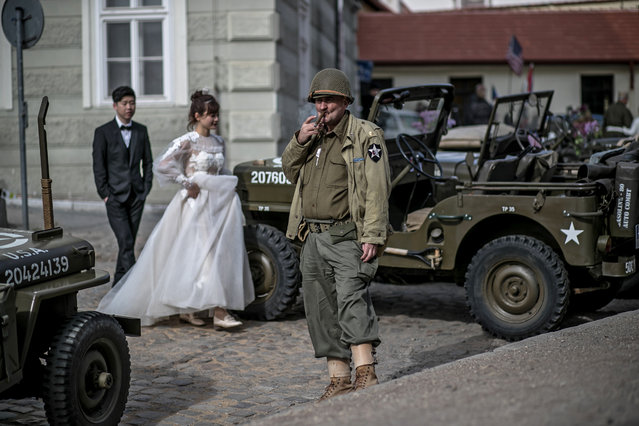 A history enthusiast (C) dressed in US Army uniform from World War II smokes a cigarette during the “Convoy of Liberty” in Prague, Czech Republic, 27 April 2018. The “Convoy of Liberty” commemorates the liberation of the western part of Czech Republic from Nazi oppression by the US Army at the end of the World War II in APril and May 1945. The convoy's route begins on the bank of Vltava river in Prague and traditionally makes its first stop in front of the US Embassy, where it is welcomed by a Czech Army Military Band and many spectators. (Photo by Martin Divisek/EPA/EFE) 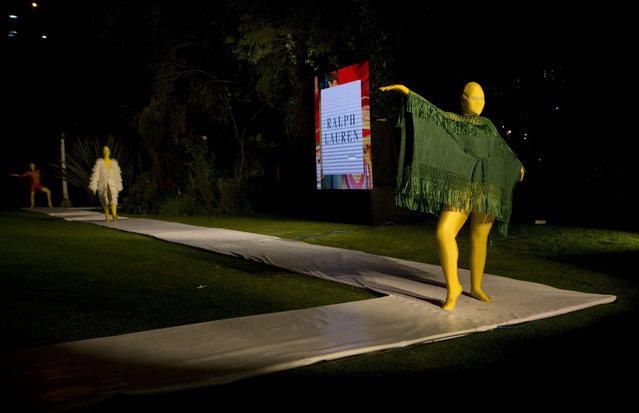