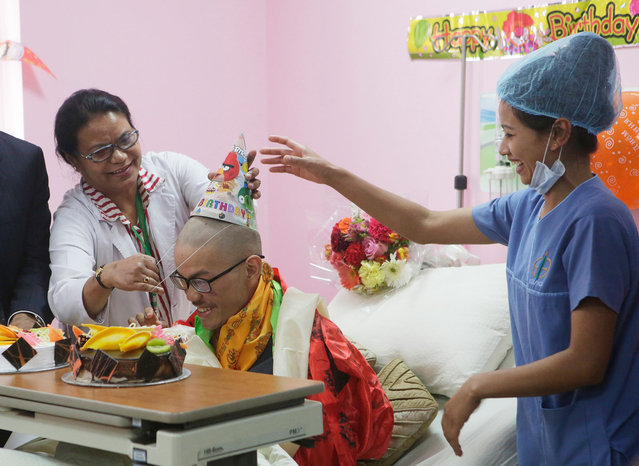 Medical staff congratulate Taiwanese trekker Liang Sheng-yueh during a birthday celebration at Grandee International Hospital in Kathmandu, Nepal, Friday, April 28, 2017. The Taiwanese man who was rescued on Wednesday after 47 days on a mountain in Nepal has celebrated his 21st birthday at a hospital in the capital. (Photo by Niranjan Shrestha/AP Photo) 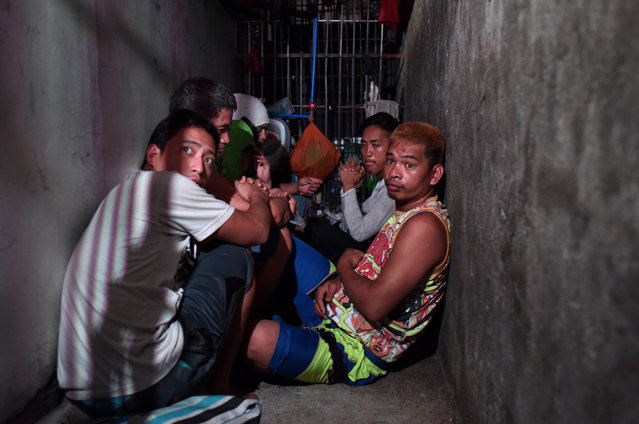 Alleged drug suspects detained at a small secret cell behind a wooden cabinet on April 27, 2017 in Manila, Philippines. The commission on Human Rights raided a Manila police station on Thursday to uncover a space of about 3 by 15 feet, where dozens of drug suspects, including 3 women, were detained for a week and allegedly brought out to be beaten or tortured, according to reports. The detainees alleges that they were kept inside the cramped cell without window, ventilation or lights for days, without filing any case against them, while waiting until a relative comes up with at least a thousand dollars paid to the police in exchange for their release. (Photo by Jes Aznar/Getty Images) 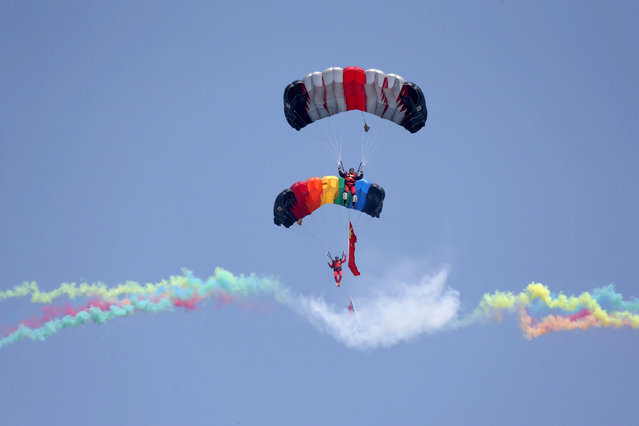 The Henan skydiving team performs at the Airshow Zhengzhou 2017 in Zhengzhou, central China's Henan province on April 28, 2017. The airshow takes place from April 27 to May 1. (Photo by AFP Photo/Stringer) 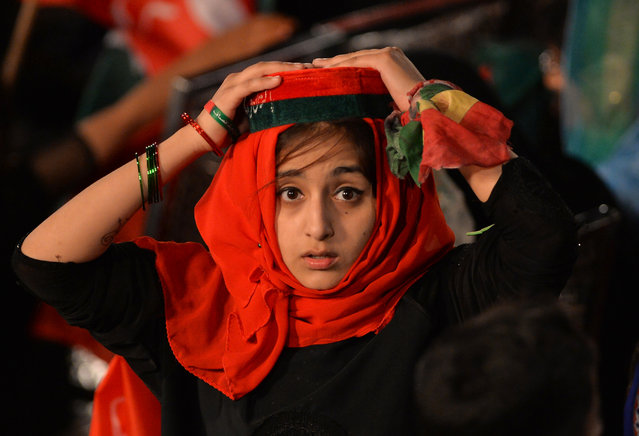 A young supporter of Pakistani cricketer-turned-opposition leader and head of the Pakistan Tehreek-i-Insaf (PTI) Imran Khan attends an anti-governement rally in Islamabad on April 28, 2017. Pakistan's top court ordered the prime minister be investigated for corruption on April 20, in a highly anticipated decision that granted Nawaz Sharif a temporary reprieve as judges said there was insufficient evidence to oust him from power. Sharif and his children had been accused of graft in an ongoing case that had threatened to topple the prime minister and captivated Pakistan after the Panama Papers leak last year linked the family to offshore business. (Photo by Aamir Qureshi/AFP Photo) 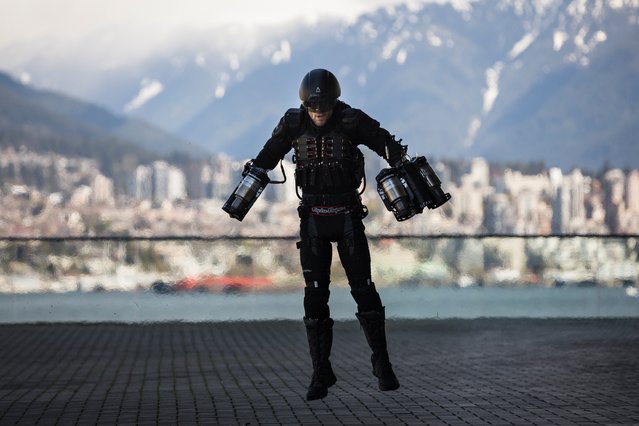 British inventor Richard Browning liftS off at a TED conference in Vancouver, Canada, on April 27, 2017. Using thrusters attached to his arms and back, Browning flew in a circle and hovered a short distance from the ground, captivating attendees of a prestigious TED Conference with the demonstration. The personal flight suit is capable of propelling wearers much higher and faster, according to its creators. (Photo by Bret Hartman/TED) 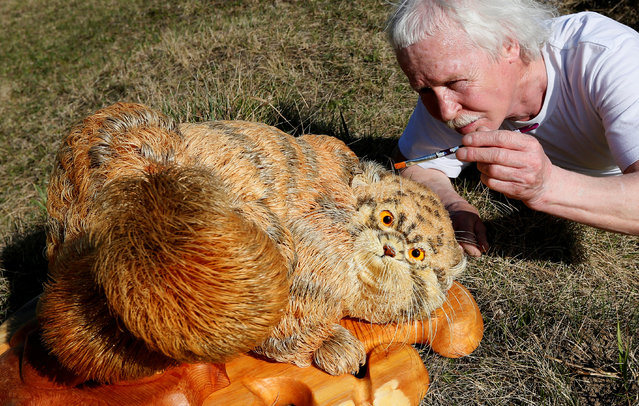 Sergei Bobkov, 59, paints Siberian cedar nut oil onto a life-size sculpture of Pallas's Cat, also known in Russia as Manul Cat, which he made from Siberian cedar wood shavings using more than 700 thousand pieces over four years, in the village of Kozhany, southwest of the Siberian city of Krasnoyarsk, Russia, April 28, 2017. (Photo by Ilya Naymushin/Reuters) 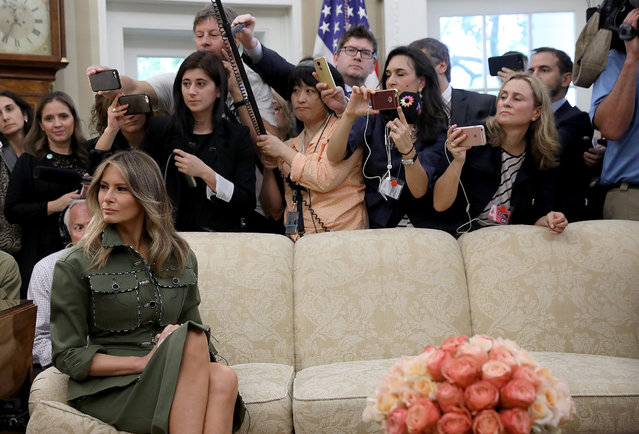 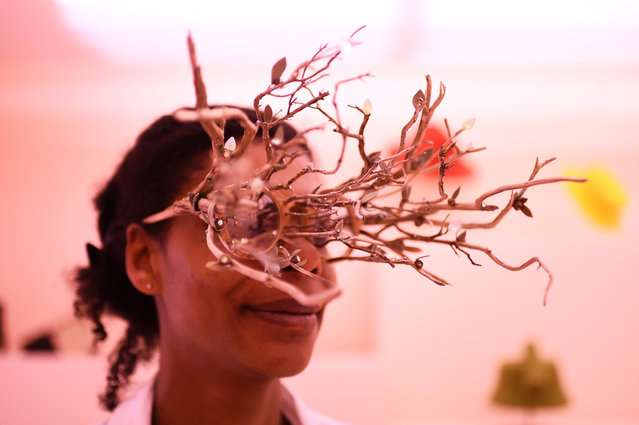 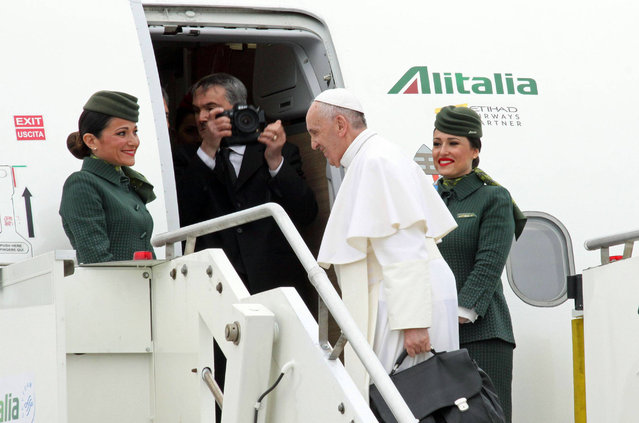 Pope Francis boards a plane on his way to Cairo, Egypt, at Rome's Fiumicino inernational airport, Friday, April 28, 2017. Francis is travelling to Egypt for a two-day trip aimed at presenting a united Christian-Muslim front that repudiates violence committed in God's name. (Photo by Telenews/ANSA via AP Photo) 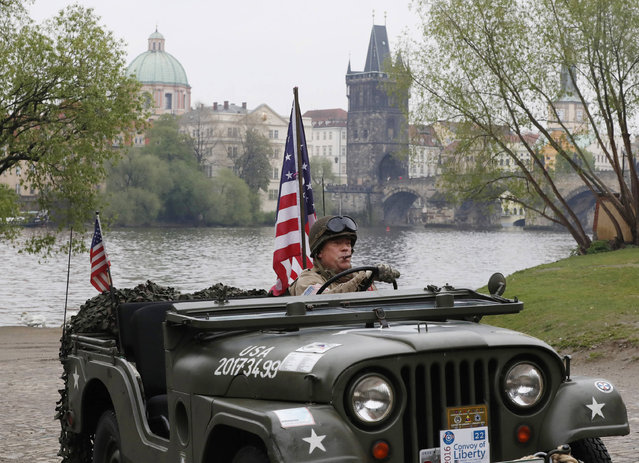 A history enthusiast dressed in U.S. Army World War II uniform drives his military jeep during the “Convoy of Liberty” that commemorates the 72nd anniversary of the end of the WWII in Prague, Czech Republic, Friday, April 28, 2017. (Photo by Petr David Josek/AP Photo) 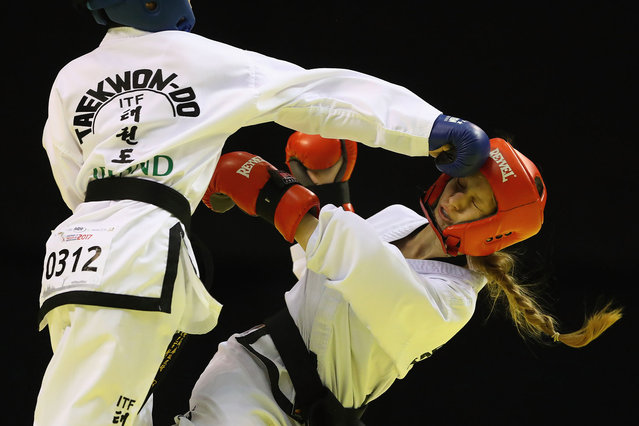 Anna Skuratova (R) of Ukraine receives a blow from Sofia Hu (L) of Ireland in the Individual Sparring Junior 14-15 Female 52 kg category during day two of the 2017 European Taekwondo Championships at The Echo Arena on April 28, 2017 in Liverpool, England. (Photo by Michael Steele/Getty Images) 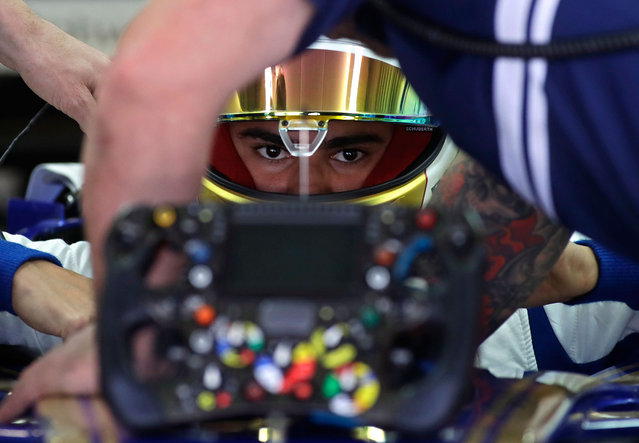 Sauber driver Pascal Wehrlein of Germany is helped getting into his car cockpit during the second practice session ahead the Formula One Russian Grand Prix at the “Sochi Autodrom” circuit, in Sochi, Russia, Friday, April 28, 2017. The Russian Formula One Grand Prix will be held on Sunday. (Photo by Sergei Grits/AP Photo) 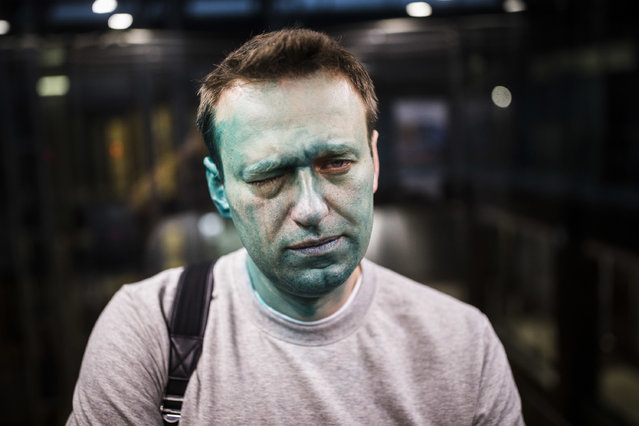 In this photo taken on Thursday, April 27, 2017, Russian opposition leader Alexei Navalny poses for a photo after unknown attackers doused him with green antiseptic outside a conference venue in Moscow, Russia. Navalny, who authored a documentary about the Russian prime minister's alleged corrupt wealth that was viewed more than 20 million times online, was the key force behind nationwide anti-government rallies in March, Russia's largest and most widespread in years. (Photo by Evgeny Feldman/Pool Photo via AP Photo) 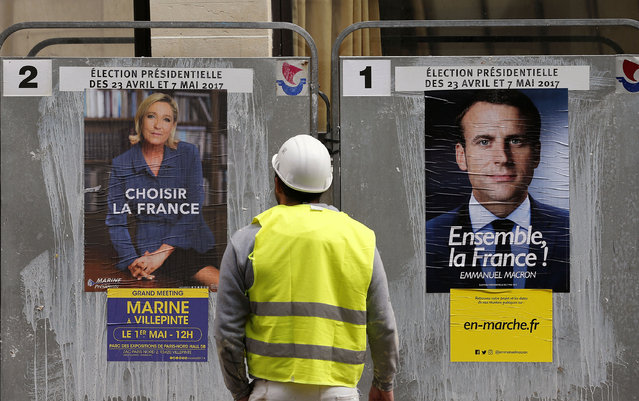 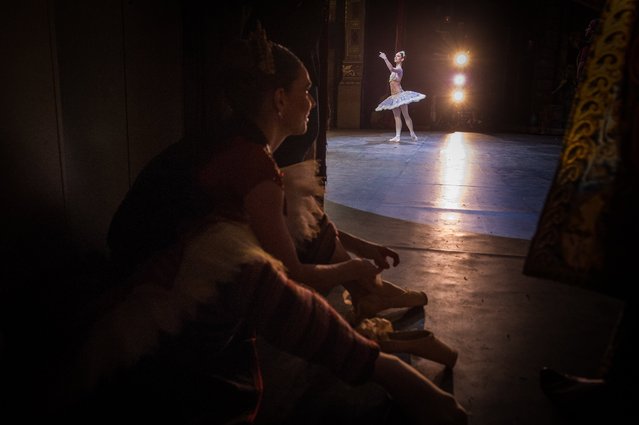 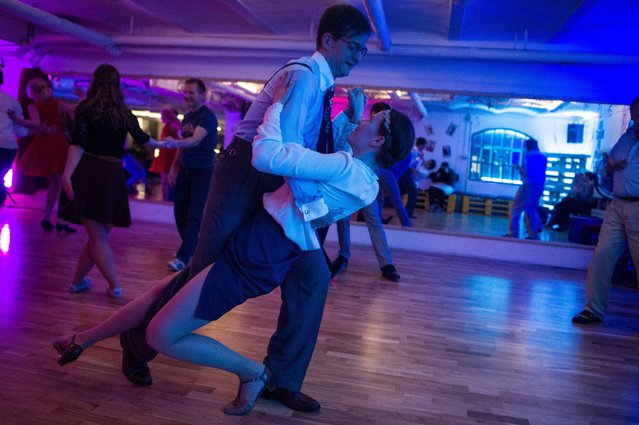 People dance during a swing class in the dance studio of the Tango Factory Budapest, in Budapest, Hungary, 24 April 2017 (issued 28 April). (Photo by Bea Kallos/EPA) 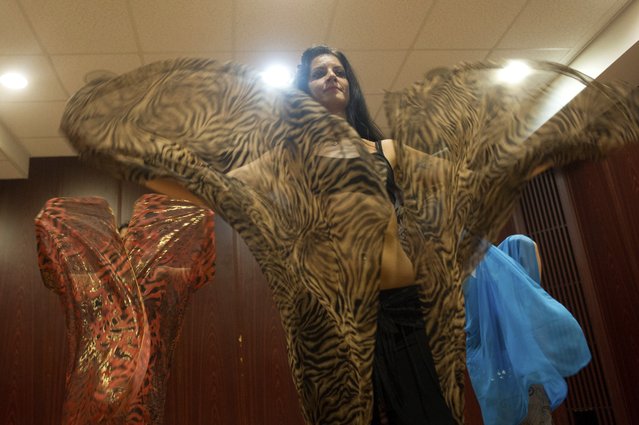 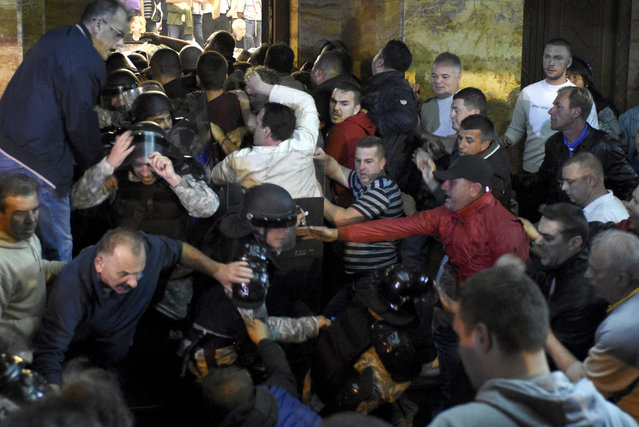 Protestors clash with police to enter into the parliament building in Skopje, Macedonia, Thursday, April 27, 2017. Chaos swept into Macedonia's parliament Thursday as demonstrators stormed the building and attacked lawmakers to protest the election of a new speaker despite a months-old deadlock in efforts to form a new government. (Photo by Dragan Perkovski/AP Photo) 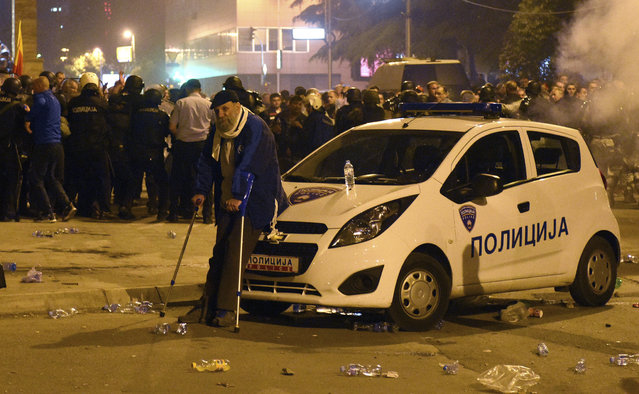 A man rests by a police car during clashes between protesters and the police in front of the parliament building in Skopje, Macedonia, Thursday, April 27, 2017. (Photo by Dragan Perkovski/AP Photo) 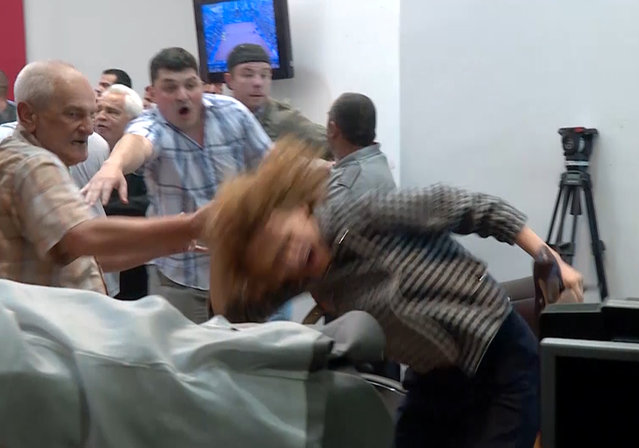 Social Democrat party’s vice president Radmila Sekerinska has her hair violently pulled, as supporters of the country's dominant conservative party invaded parliament, in Skopje, Macedonia, Thursday April 27, 2017. Police said over 100 people were injured during the Thursday night violence inside and outside parliament that followed the election of a new parliament speaker. Sekerinska said she required three stitches and injured her neck when two individuals attacked her inside parliament. Television footage from Thursday night showed a man grabbing her by the hair and twisting her around violently during the melee. “We were more shocked than afraid. I cannot forget the faces of those who attacked me”, Sekerinska told The Associated Press Friday. (Photo by Radio Free Europe via AP Photo) 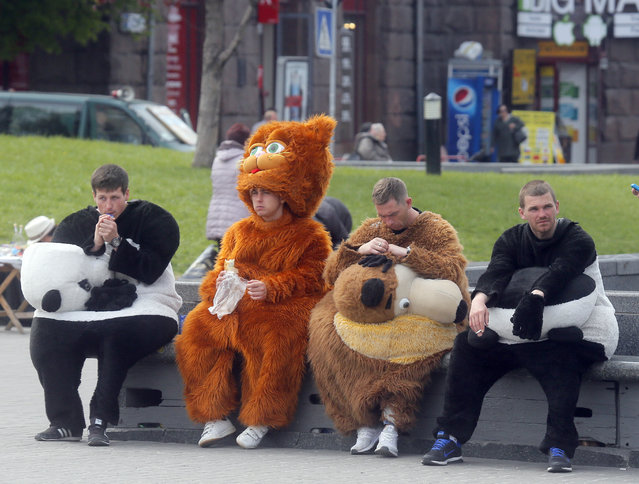 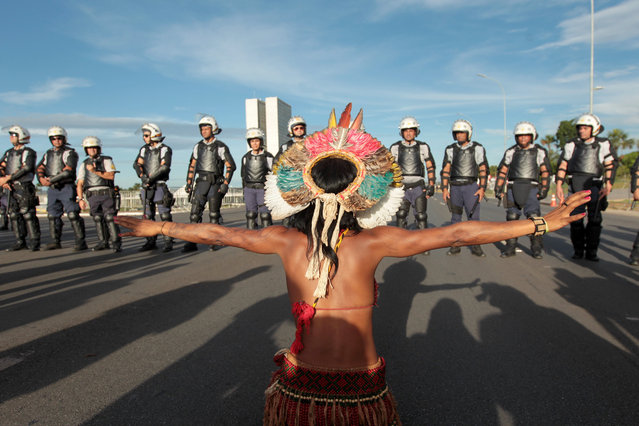 Indigenous people from different Brazilian tribes protest in Brasilia, Brazil, 27 April 2017. In addition to demanding faster demarcation of indigenous lands, the protesters also expressed their rejection against a bill that the Congress is processing, which proposes to alter the regulations that govern the delimitation of those territories. (Photo by Joédson Alves/EPA) 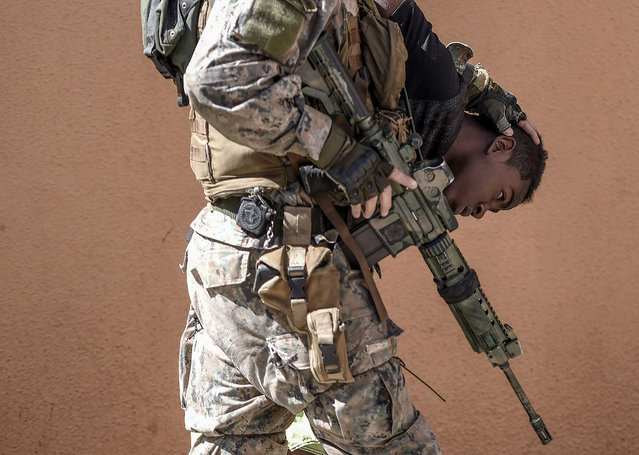 A Brazilian military police officer holds a suspected drug dealer during an anti-drug operation in which 13-year-old Henrique de Oliveira was shot dead in front of his house in the Complexo do Alemao favela or shantytown in Rio de Janeiro, Brazil, on April 25, 2017. (Photo by Fabio Teixeira/AFP Photo) 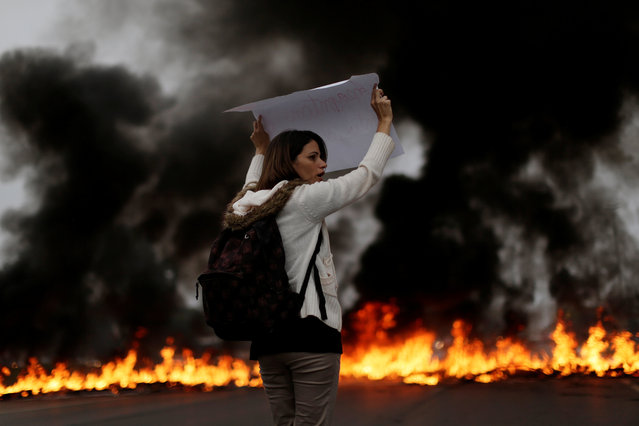