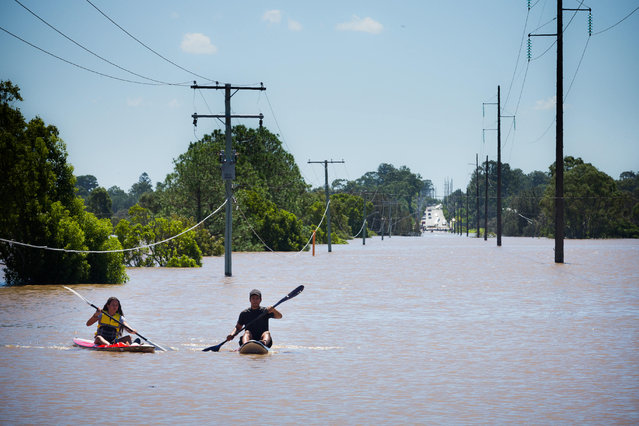 Kayakers paddle on the flooded Logan River, caused by Cyclone Debbie, as it flows over the Mt Lindesay Highway in Waterford West near Brisbane on April 1, 2017. Flooded rivers were still rising on April 1 in two Australian states with two women dead and four people missing after torrential rains in the wake of a powerful tropical cyclone. (Photo by Patrick Hamilton/AFP Photo) 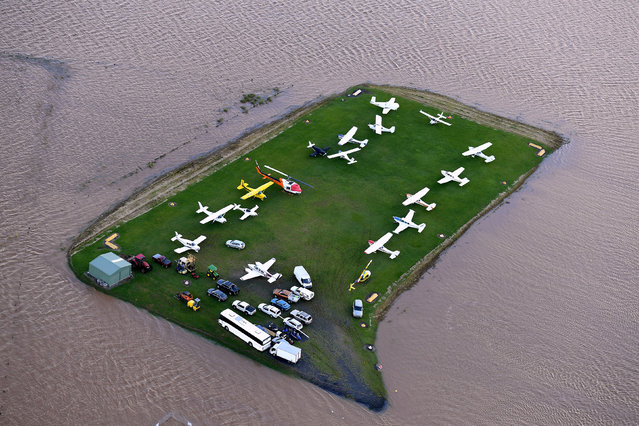 Aircraft can be seen surrounded by floodwaters near the airport of the northern New South Wales town of Lismore, Australia, March 31, 2017 after heavy rains associated with Cyclone Debbie swelled rivers to record heights across the region. (Photo by Dave Hunt/Reuters/AAP) 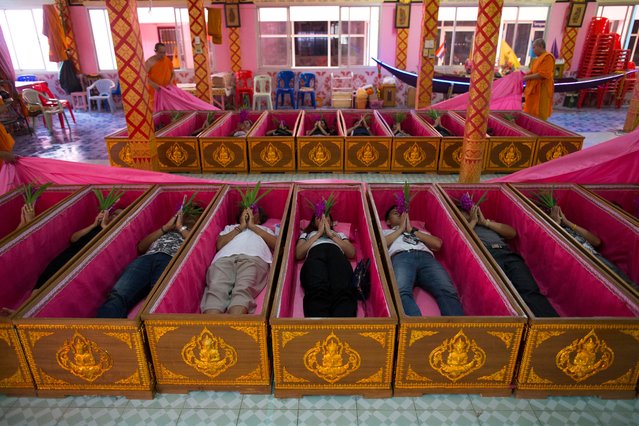 Thai devotees lie inside coffins as Buddhist monks officiate during a coffin ritual at Wat Takien temple in Nonthaburi province, Thailand, 01 April 2017 (issued 02 April 2017). The Buddhist temple offers believers to attend the resurrection ritual by laying down in coffins while monks pass a cloth over them, chant a dirge for the symbolic death and then rise up again believing that they are cleansed of their karma, get rid of bad luck and reborn for a fresh start in life with protection from harm, wealthy, good health and their wishes completely fulfilled. (Photo by Rungroj Yongrit/EPA) 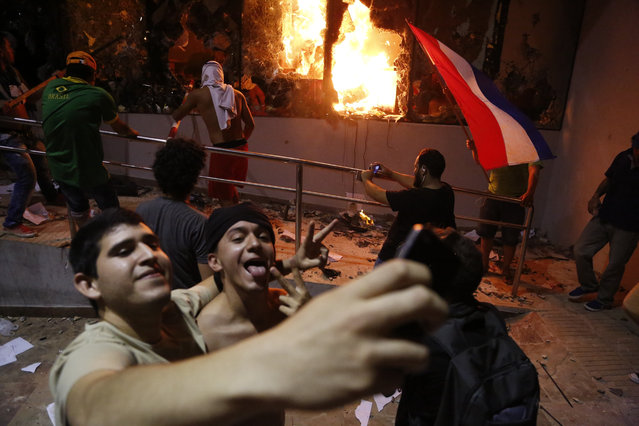 Men pose for a photo outside the congress building during clashes between police and protesters opposing an approved proposed constitutional amendment that would allow the election of a president to a second term, in Asuncion, Paraguay, Friday, March 31, 2017. Some protesters broke through police lines and entered the first floor, where they set fire to papers and furniture. Police used water cannon and fired rubber bullets to drive demonstrators away from the building while firefighters extinguished blazes inside. (Photo by Jorge Saenz/AP Photo) 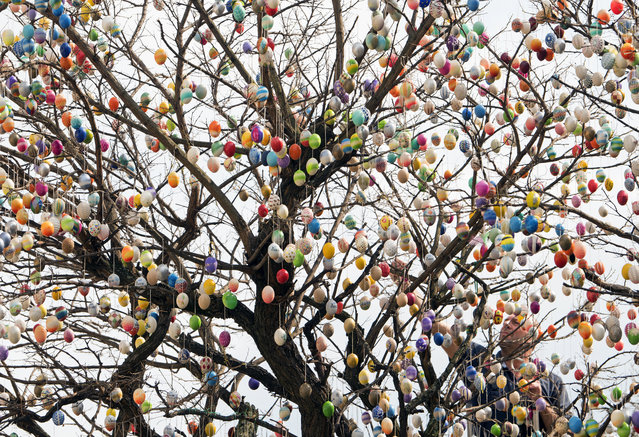 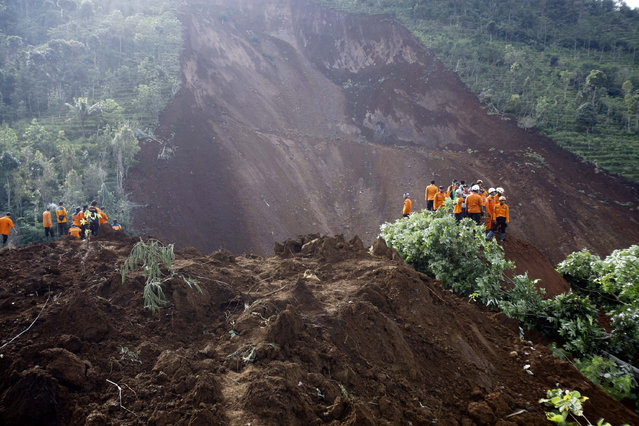 Indonesian rescuers search for victims at Banaran village which is hit by a landslide in Ponorogo, Indonesia, 02 April 2017. At least 28 people are missing and hundreds were evacuated to safer residential areas after a rain-triggered landslide hit a village in Ponorogo, East Java. (Photo by Ali Lutfi/EPA) 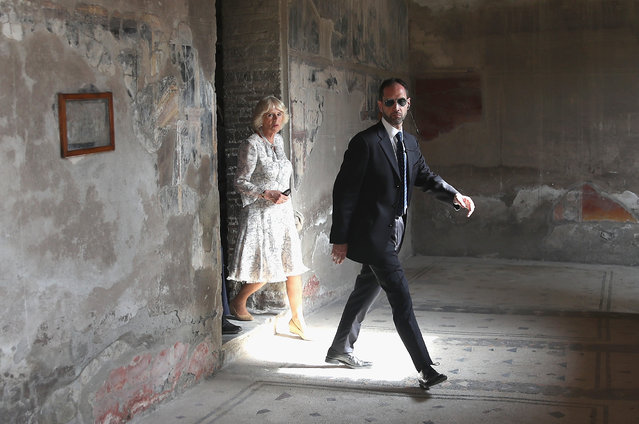 Camilla, Duchess of Cornwall visits Herculaneum Archaeological Site and the Boat Pavillion to view artefacts excavated from Herculaneum and is given a tour of the archaeological site on the second day of her tour of Italy on April 1, 2017 in Naples, Italy. (Photo by Chris Jackson/Getty Images) 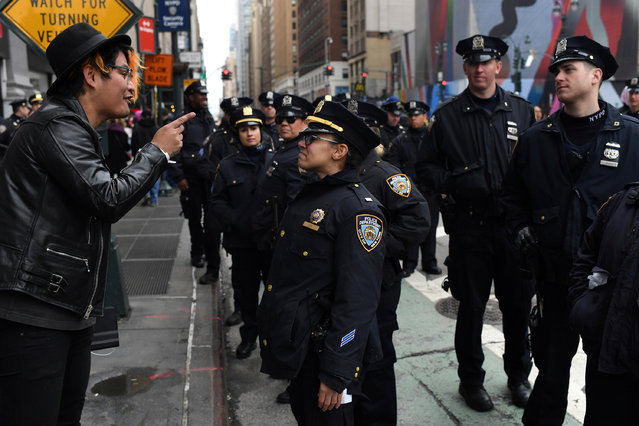 A Black Lives Matter activist confronts a member of the NYPD during a protest against U.S. President Donald Trump and New York Mayor Bill de Blasio in the Manhattan borough of New York, U.S., April 1, 2017. (Photo by Darren Ornitz/Reuters) 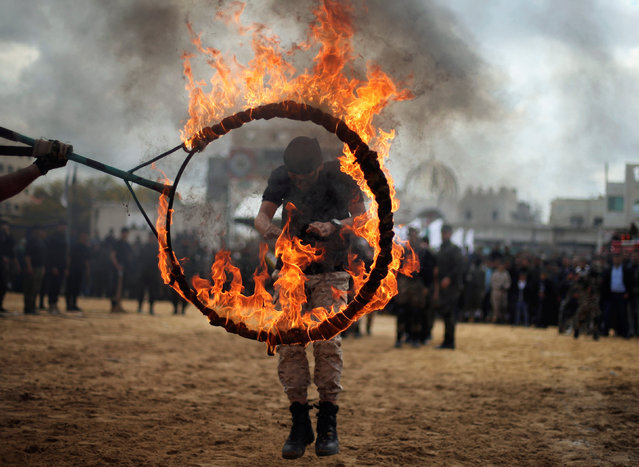 A Palestinian jumps through a ring of fire during a military exercise graduation ceremony organized by Palestinian national security forces loyal to Hamas, in Gaza City April 2, 2016. (Photo by Mohammed Salem/Reuters) 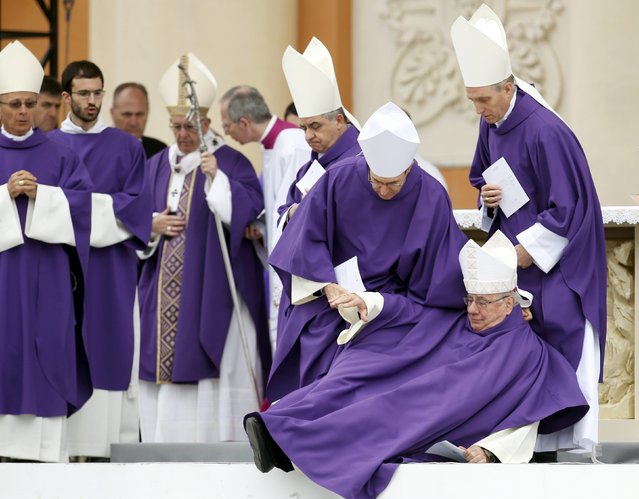 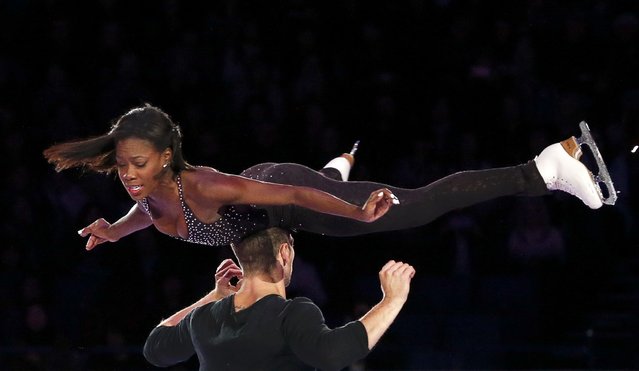 Vanessa James and Morgan Cipres of France perform during the Exhibition of the Champions at the ISU World Figure Skating Championships in Helsinki, Finland on April 2nd, 2017. (Photo by Grigory Dukor/Reuters) 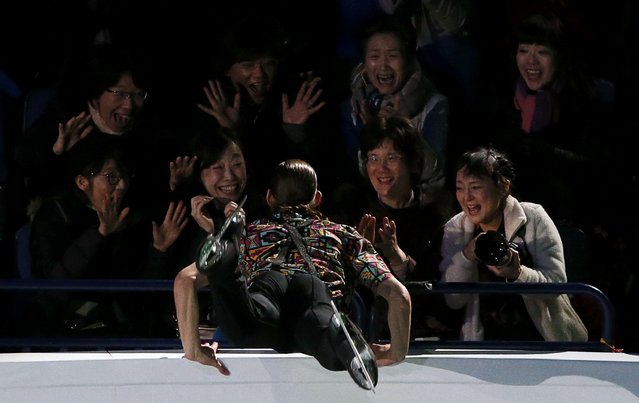 Jason Brown of US performs during the Exhibition of the Champions at the ISU World Figure Skating Championships in Helsinki, Finland on April 2nd, 2017. (Photo by Grigory Dukor/Reuters) 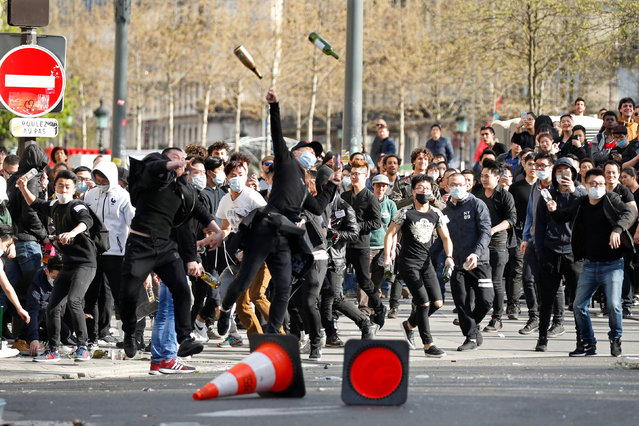 Prostesters throw bottles to French CRS riot police after a ceremony in memory of 56-year-old Shaoyao Liu, who was shot dead by police at his Paris home last Sunday, in Paris, France April 2, 2017. (Photo by Charles Platiau/Reuters) 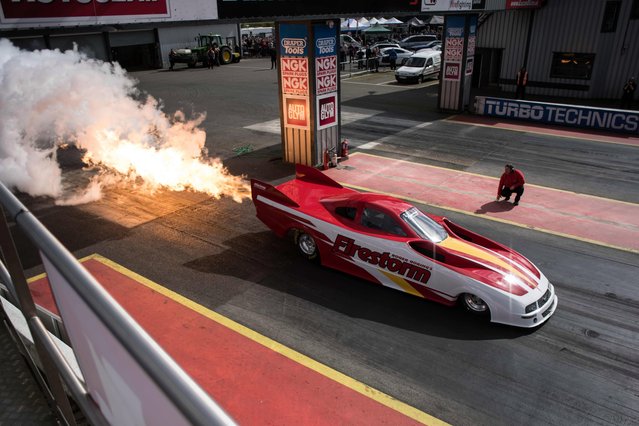 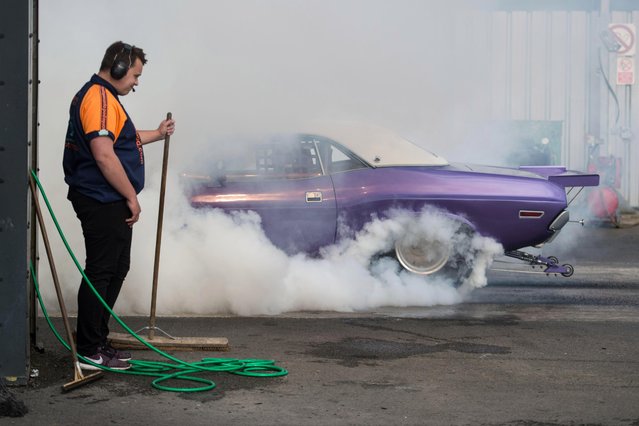 A marshal stands by as a muscle car smokes its tyres on the start line before taking part in a drag race at The Fast Show performance car event held at the Santa Pod Raceway near Wellingborough, central England on April 2, 2017. (Photo by Oli Scarff/AFP Photo) 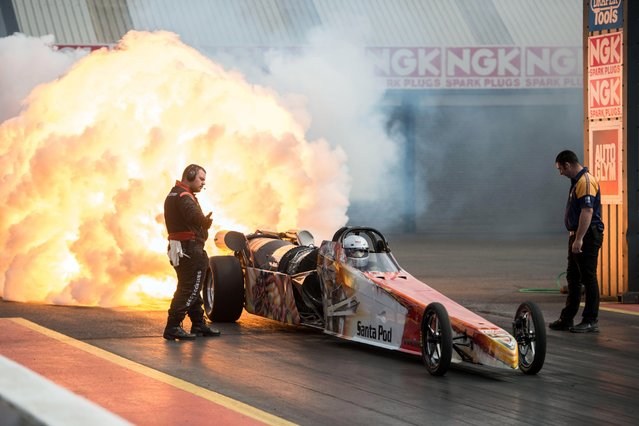 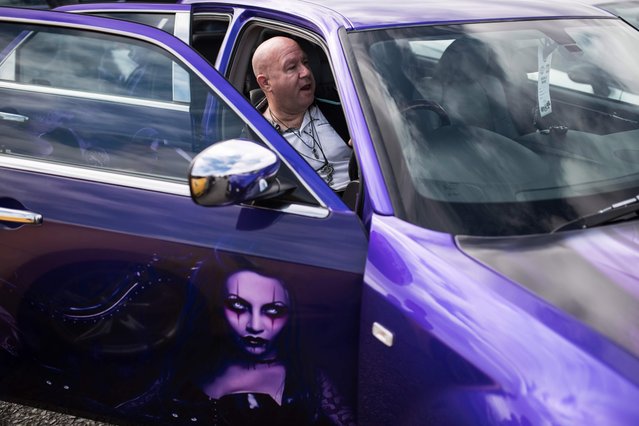 A modified vehicle enthusiast relaxes in his car at The Fast Show performance car event held at the Santa Pod Raceway near Wellingborough, central England on April 2, 2017. (Photo by Oli Scarff/AFP Photo) 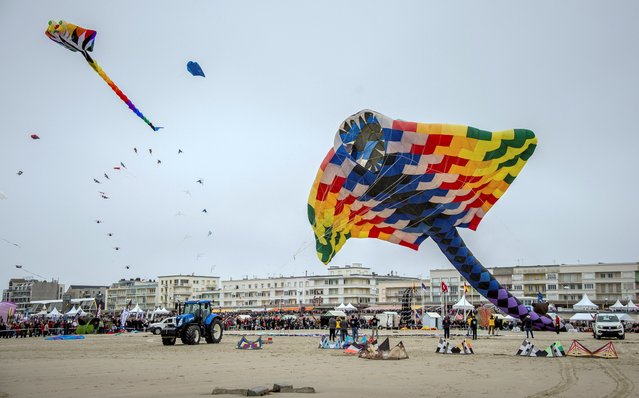 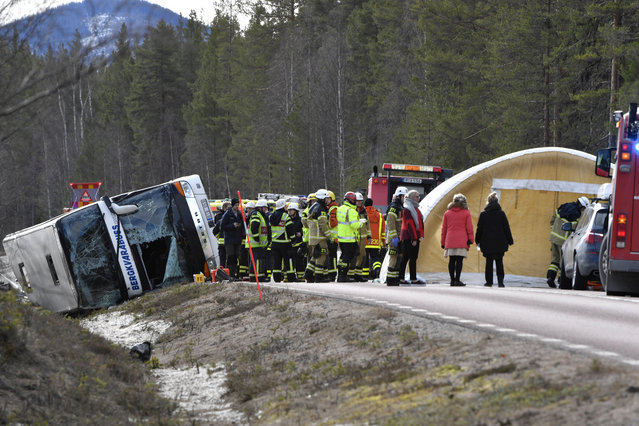 Emergency services and ambulance at the scene of a bus accident, on the E45 between Sveg and Fagelsjo in Sweden, Sunday, April 2, 2017. ﻿Three people were killed and over a dozen injured, six of them seriously when a bus carrying mostly schoolchildren crashed in central Sweden, rescue officials said Sunday. (Photo by Nisse Schmidt/ TT via AP Photo) 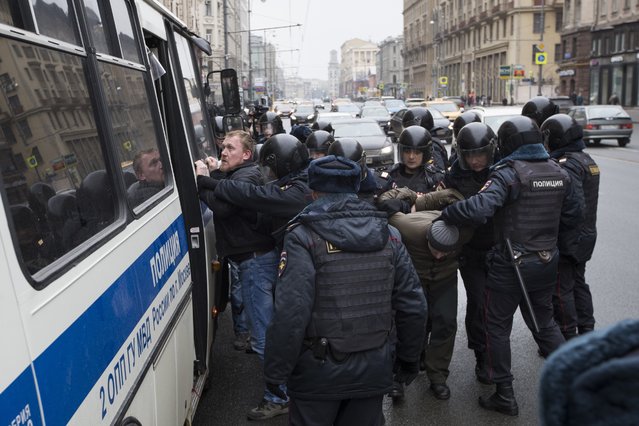 Police officers detain people in the main street in Moscow, Russia, Sunday, April 2, 2017. Russian prosecutors have moved to block calls on social networks ahead of street protests in Moscow and other Russian cities following a wave of rallies. (Photo by Pavel Golovkin/AP Photo) 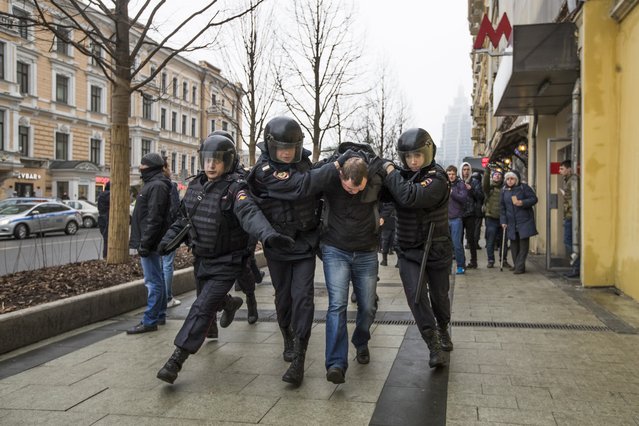 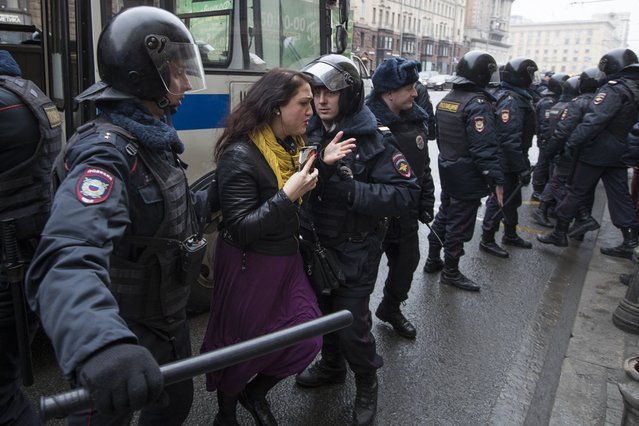 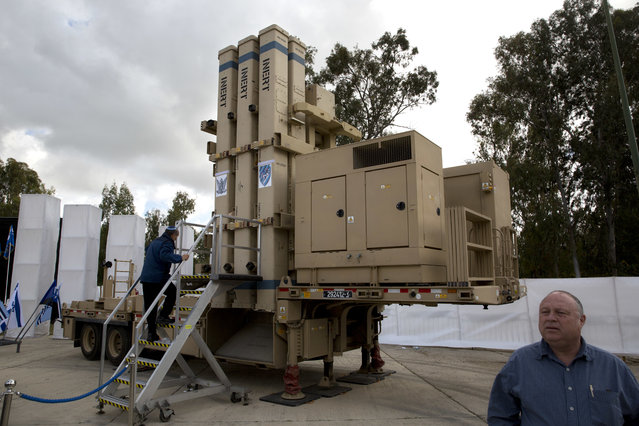 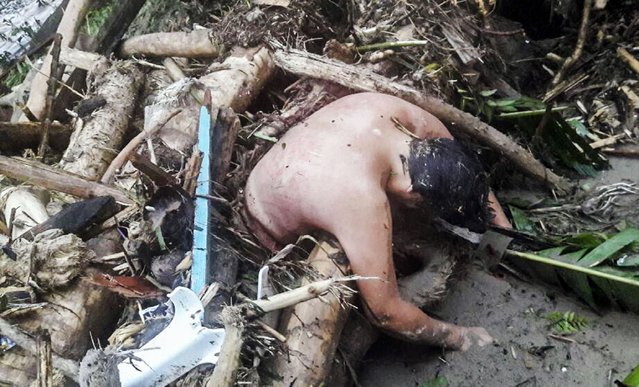 Handout picture released by the Colombian Army press office showing the corpse of a man caught in a mudslide caused by heavy rains, in Mocoa, Putumayo department, on April 1, 2017. Mudslides in southern Colombia -caused by the rise of the Mocoa River and three tributaries- have claimed at least 16 lives and injured some 65 people following recent torrential rains, the authorities said. (Photo by AFP Photo/Ejercito De Colombia) 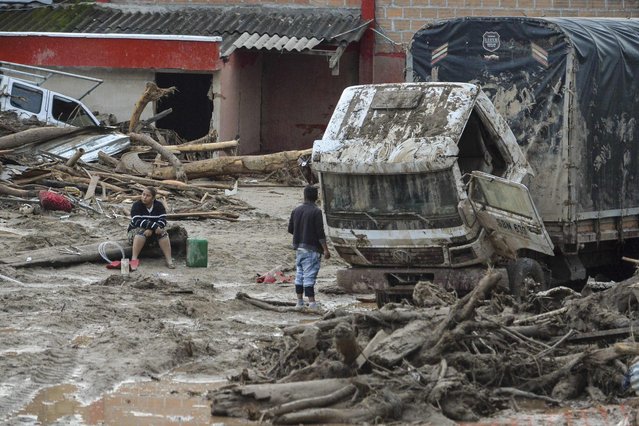 People stare at damages caused by mudslides following heavy rains in Mocoa, Putumayo department, southern Colombia on April 2, 2017. The death toll from a devastating landslide in the Colombian town of Mocoa stood at around 200 on Sunday as rescuers clawed through piles of muck and debris in search of survivors. (Photo by Luis Robayo/AFP Photo) 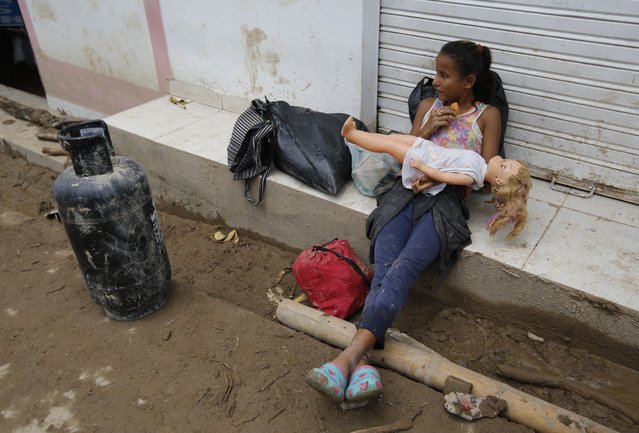 A girl holds a doll rescued from her damaged house in Mocoa, Colombia, Sunday, April 2, 2017. A grim search for the missing resumed at dawn Sunday in southern Colombia after surging rivers sent an avalanche of floodwaters, mud and debris through a city, killing at least 200 people and leaving many more injured and homeless. (Photo by Fernando Vergara/AP Photo) 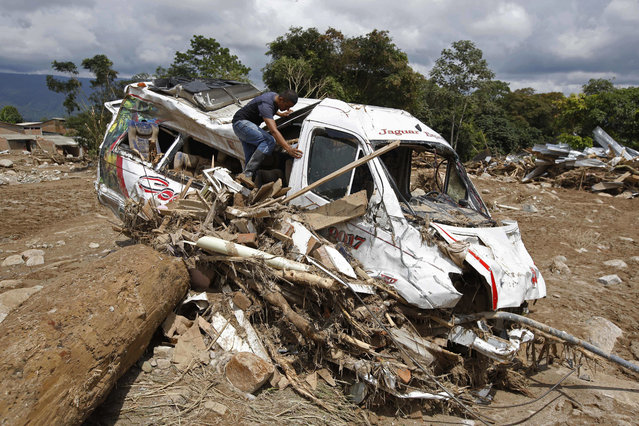 A man looks inside a damage passenger bus in Mocoa, Colombia, Sunday, April 2, 2017. Colombia's President Juan Manuel Santos, who has declared Mocoa a disaster area, said that at least 207 were killed but that the death toll was changing “every moment”. Authorities said another 200 people, many of them children, were injured and just as many were unaccounted for amid the destruction. (Photo by Fernando Vergara/AP Photo) 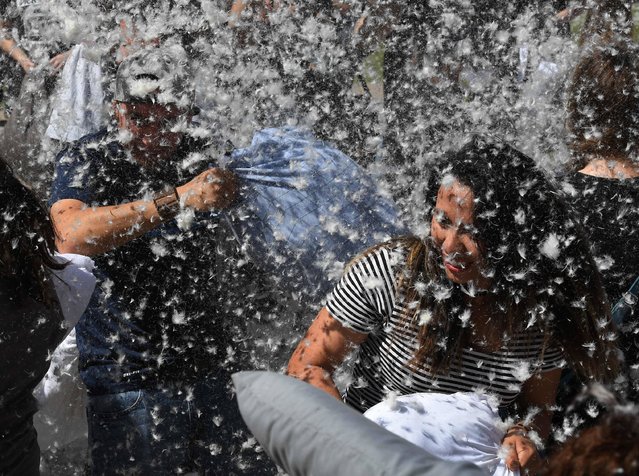 Feathers fly as participants attack each other with pillows during an International Pillow Fight Day event at Pershing Square in Los Angeles, California on April 1, 2017. (Photo by Mark Ralston/AFP Photo) 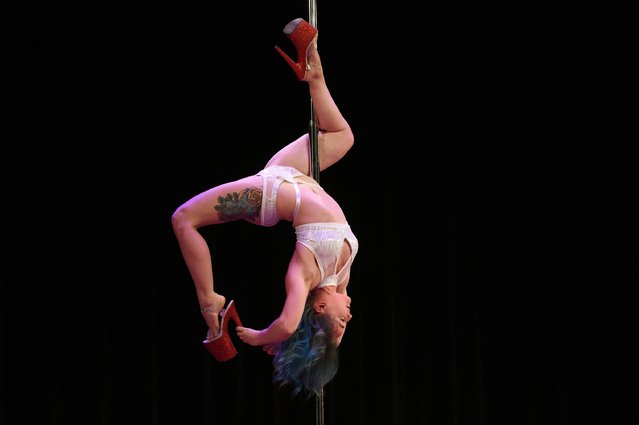 Brittnai of El Paso, Texas, USA, performs in the Professional Division Competition during the 5th Annual US Pole Dance Championship on April 1, 2017 at the Symphony Space Theater in New York City. (Photo by Timothy A. Clary/AFP Photo) 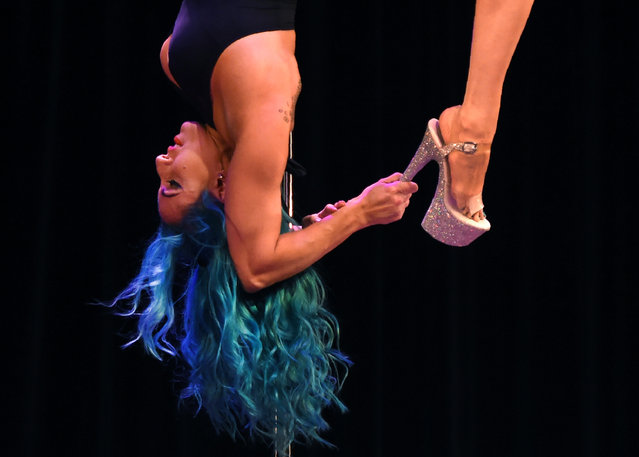 Gemma Lux of the US performs in the Professional Division Competition during the 5th Annual US Pole Dance Championship on April 1, 2017 at the Symphony Space Theater in New York City. (Photo by Timothy A. Clary/AFP Photo)
Edit Del
03 Apr 2017 09:11:00, post received 0 comments
Publication archive:
←   →
Popular tags:
All tags
Last searches: