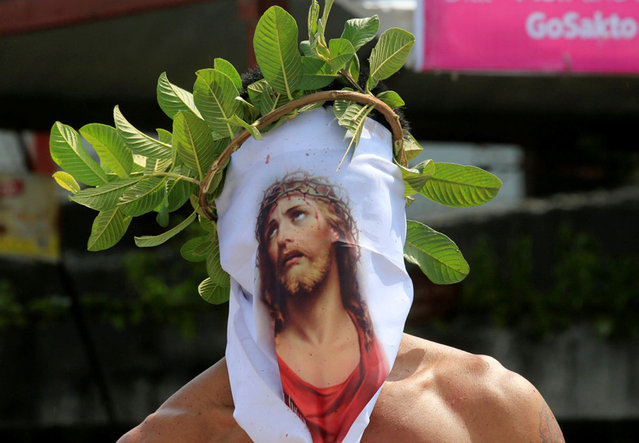 Penitents from the El Nazareno brotherhood walk to the Jesus Nazareno Church as people pass by before a procession during Maundy Wednesday on March 29, 2018 in Cordoba, Spain. Spain celebrates the holy week before Easter with processions in most Spanish towns and villages. (Photo by Pablo Blazquez Dominguez/Getty Images) 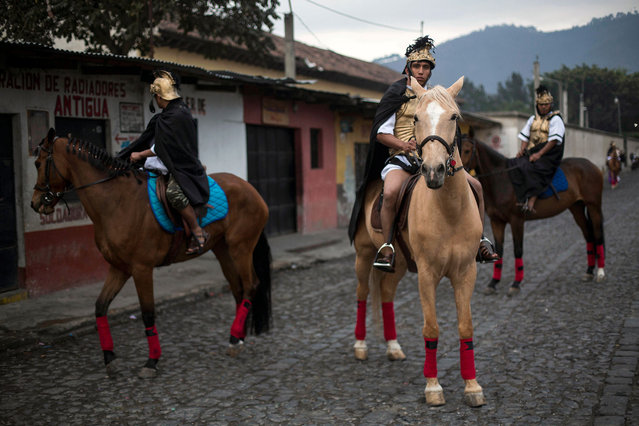 Devotees dressed as Roman soldiers wait on horseback to join the Jesus of Nazareth Good Friday procession in Antigua, Guatemala, Friday, March 30, 2018. Residents of Antigua turn their town into a biblical Jerusalem complete with Roman soldiers on horseback and trumpets marking the coming of Christ. (Photo by Moises Castillo/AP Photo) 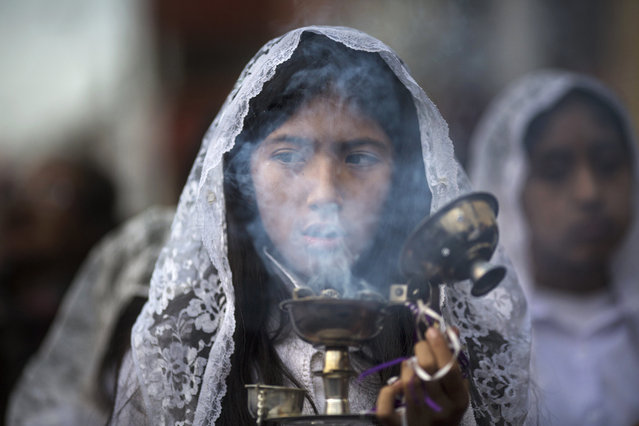 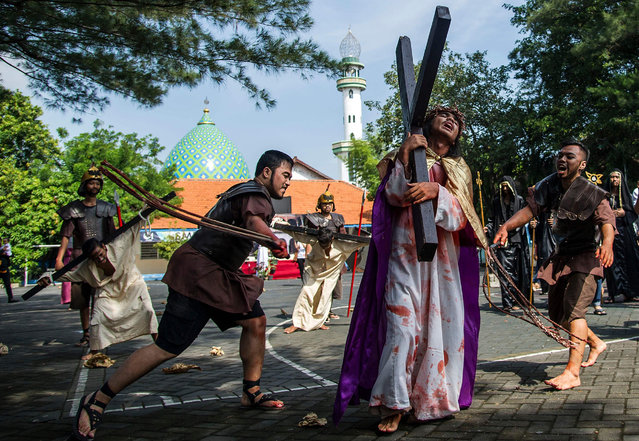 Indonesian Catholics reenact the crucifixion of Jesus Christ, as Christian devotees mark the holy week in Indonesia, a predominantly Islamic nation, at the compound of St. Mikael church in Surabaya on March 30, 2018. (Photo by Juni Kriswanto/AFP Photo) 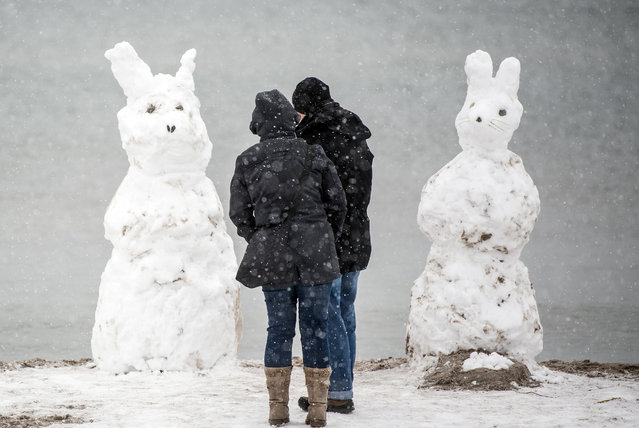 A man and a woman stand in front of two “snow hares” on the island Fehmarn, northern Germany, on April 1, 2018. (Photo by Federico Gambarini/AFP Photo/DPA) 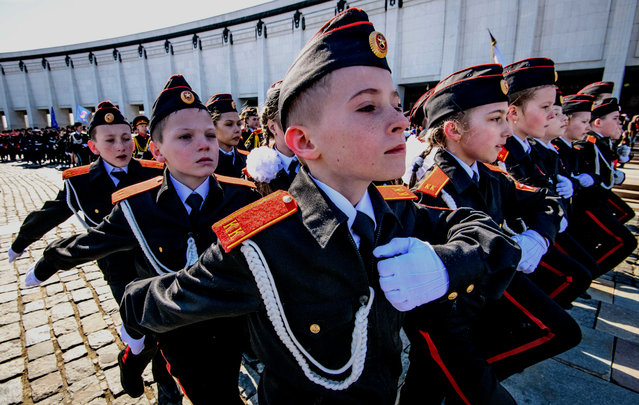 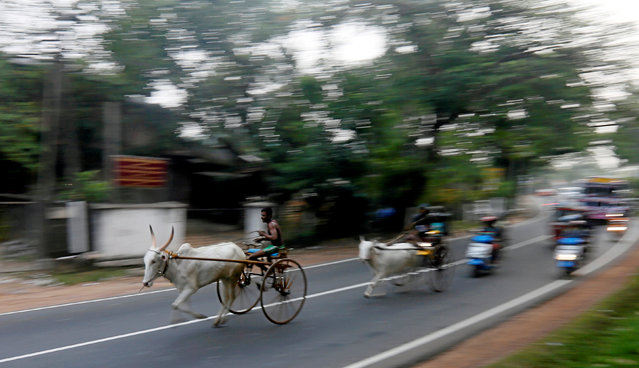 Competitors take part in a bullock cart race during traditional festival games ahead of celebrations for the Sinhalese and Tamil New Year, in Homagama, Sri Lanka April 1, 2018. (Photo by Dinuka Liyanawatte/Reuters) 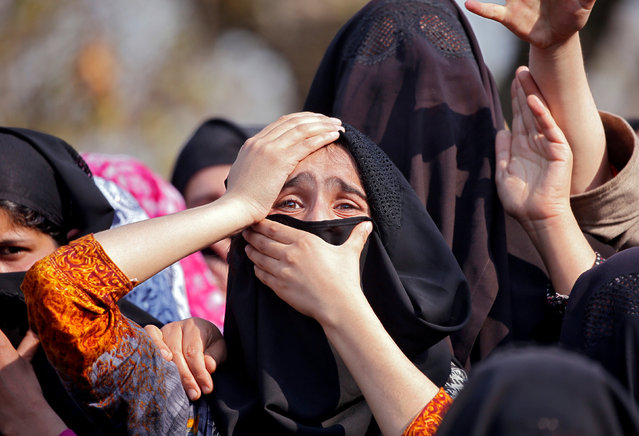 Women wail as they watch the body of Zubair Ahmed Turay, a suspected militant, being carried away during his funeral procession in south Kashmir's Shopian district April 1, 2018. (Photo by Danish Ismail/Reuters) 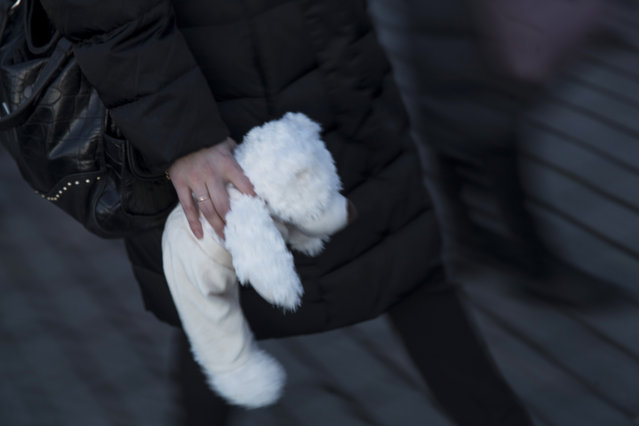 A woman carries a teddy bear to commemorate the victims of a fire in a shopping mall in the Siberian city of Kemerovo in a day of mourning, in Manezhnaya square, near the Kremlin in Moscow, Russia, Wednesday, March 28, 2018. (Photo by Pavel Golovkin/AP Photo) 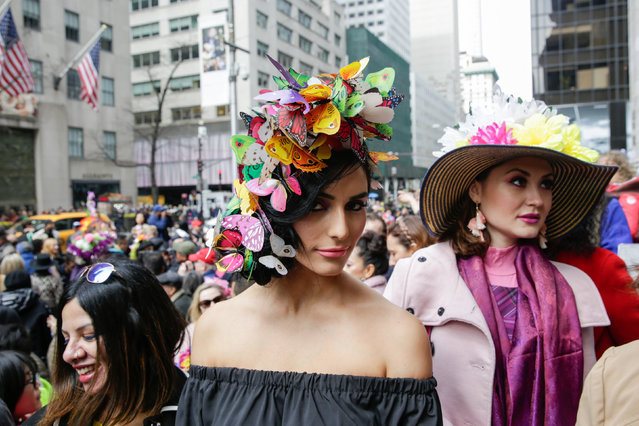 A participant poses for a photograph at the annual Easter Parade and Bonnet Festival in the Manhattan borough of New York City, New York, U.S. on April 1, 2018. (Photo by Gaia Squarci/Reuters) 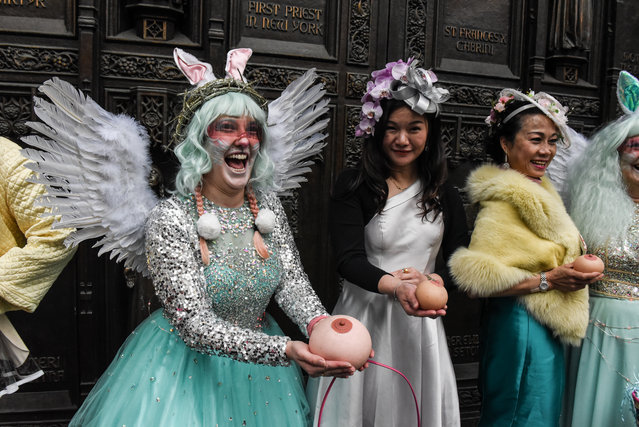 A woman wears an Easter bonnet while participating in the annual Easter parade along 5th Ave. on April 1, 2018 in New York City. Dating back to the 1870s the Easter parade attracts thousands of people each year. (Photo by Stephanie Keith/Getty Images) 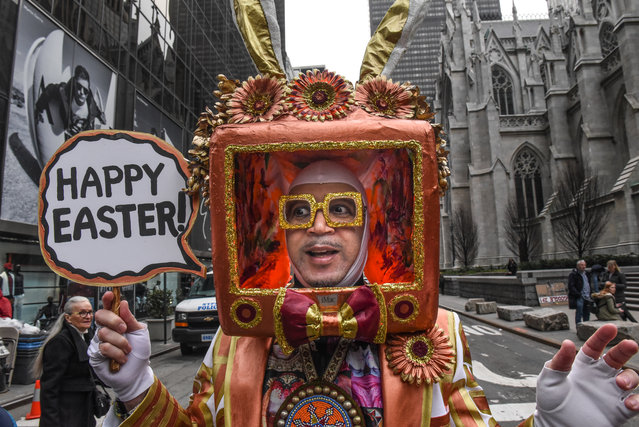 A man wears his Easter outfit while participating in the annual Easter Parade along 5th Ave. on April 1, 2018 in New York City. Dating back to the 1870s the Easter parade attracts thousands of people each year. (Photo by Stephanie Keith/Getty Images) 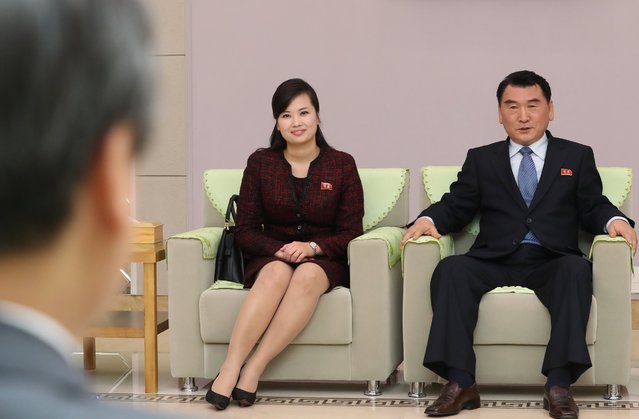 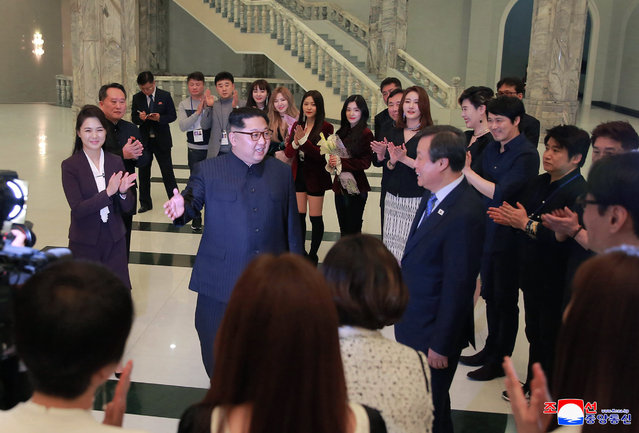 In this photo provided by the North Korean government, North Korean leader Kim Jong Un, center left, talks with South Korean Culture, Sports and Tourism Minister Do Jong-whan, center right, as his wife Ri Sol Ju, left, claps during a visit to members of a South Korean artistic group after their performance in Pyongyang, North Korea, Sunday, April 1, 2018. Kim clapped his hands as he, along with his wife and hundreds of other citizens, watched the rare performance Sunday by South Korean pop stars visiting Pyongyang, highlighting the thawing ties between the rivals after years of heightened tensions over the North's nuclear program. Independent journalists were not given access to cover the event depicted in this image distributed by the North Korean government. The content of this image is as provided and cannot be independently verified. Korean language watermark on image as provided by source reads: “KCNA” which is the abbreviation for Korean Central News Agency. (Photo by Korean Central News Agency/Korea News Service via AP Photo) 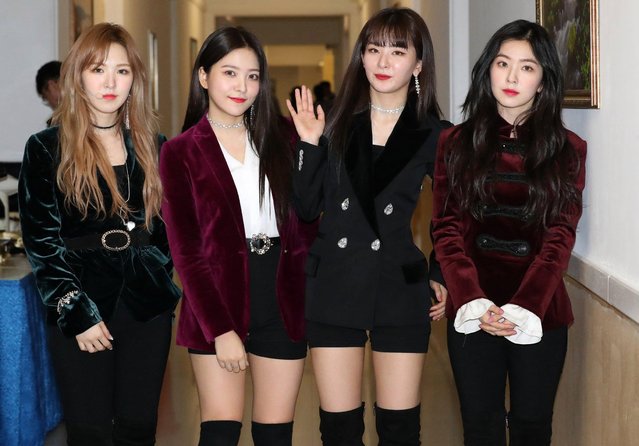 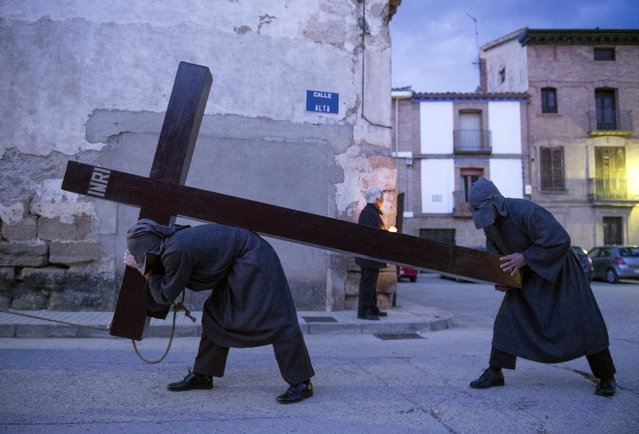 A penitent tied with a rope round the neck carries a cross during the “El Ensogado” (The roped) procession on Easter Holy Week's Maundy Thursday in the northern Spanish village of Sietamo on March 29, 2018. Christian believers around the world mark the Holy Week of Easter in celebration of the crucifixion and resurrection of Jesus Christ. (Photo by Ander Gillenea/AFP Photo) 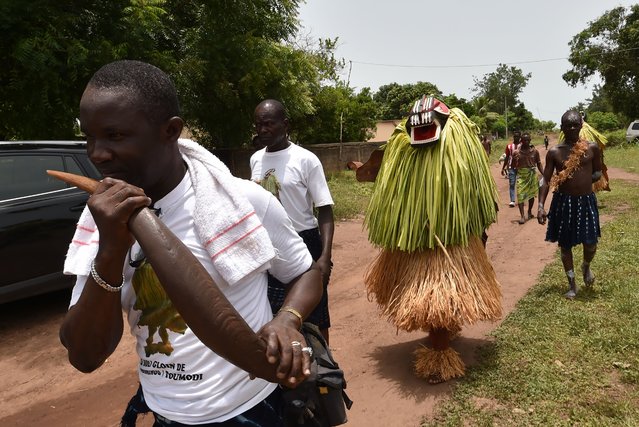 A person from the Baoule community wearing a Goly mask and guides arrive to perform at the youth residence in Assounvoue village, part of Toumodi, central Ivory Coast, on March 31, 2018 on the eve of “Paquinou”, easter celebration traditionally marked by “palaver”, reconciliation, feast, music and dance. (Photo by Sia Kambou/AFP Photo) 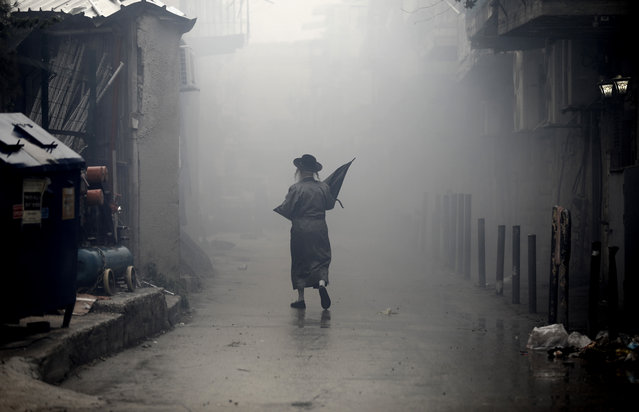 An Ultra-Orthodox Jewish man walks down a street through the smoke from burning leavened items during the Srefat Chametz ritual on March 30 2018 in Jerusalem on the eve of the Jewish Pesach (Passover) holiday, which begins at sunset today. Due to the haste with which the Jews left Egypt, the bread they had prepared for the journey did not have time to rise. To commemorate their ancestors' plight, the religious avoid eating leavened food products throughout Passover. (Photo by Menahem Kahana/AFP Photo) 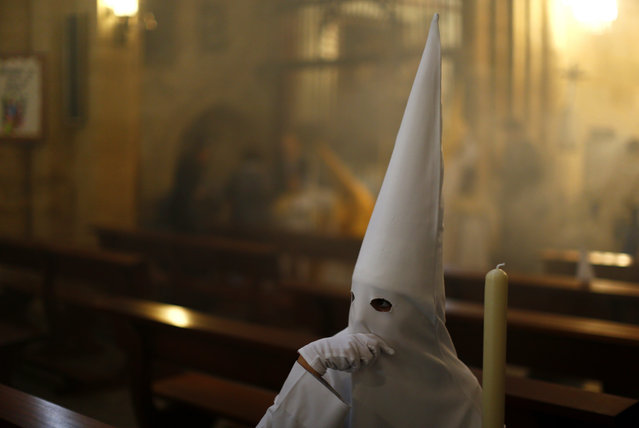 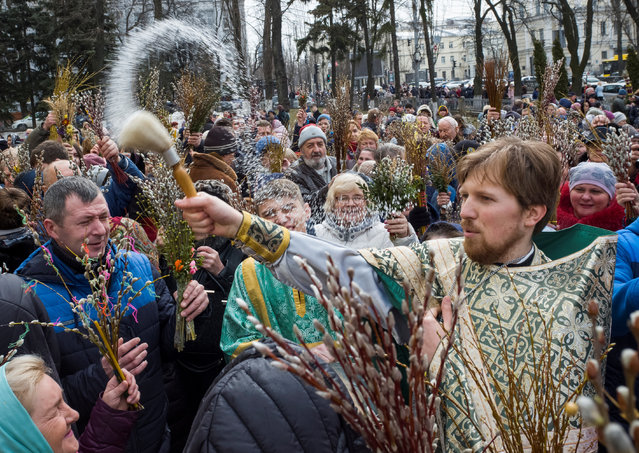 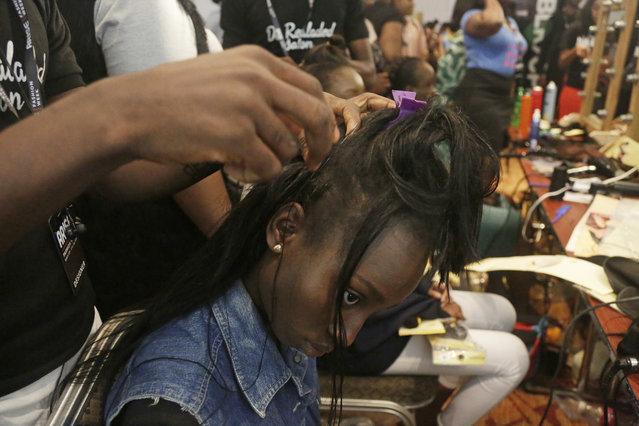