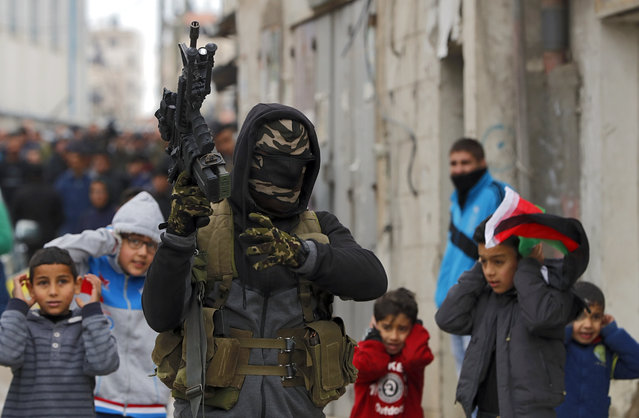 Palestinian militants hold up their automatic machine guns as they fire into the air during the funeral of 23-year-old Palestinian Mohammed Adwan, who was killed during a clash with Israeli forces near Jerusalem overnight, in the Qalandia refugee camp near Ramallah in the West Bank, on April 2, 2019. (Photo by Ahmad Gharabli/AFP Photo) 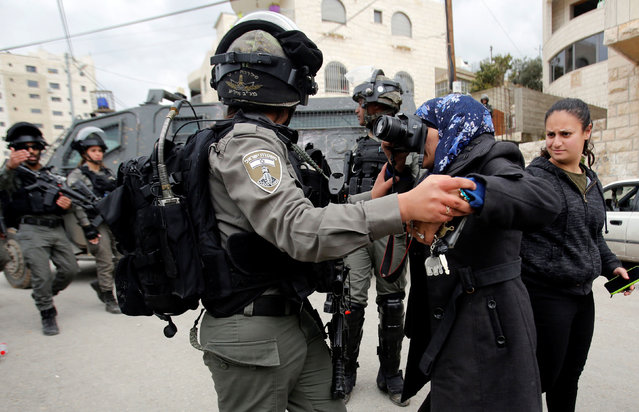 A local photographer takes pictures as an Israeli border police member holds her back during the demolition of a Palestinian house whose owners said they were informed by the Israeli forces that they didn’t obtain a construction license, in Beit Jala in the Israeli-occupied West Bank on April 2, 2019. (Photo by Mussa Qawasma/Reuters) 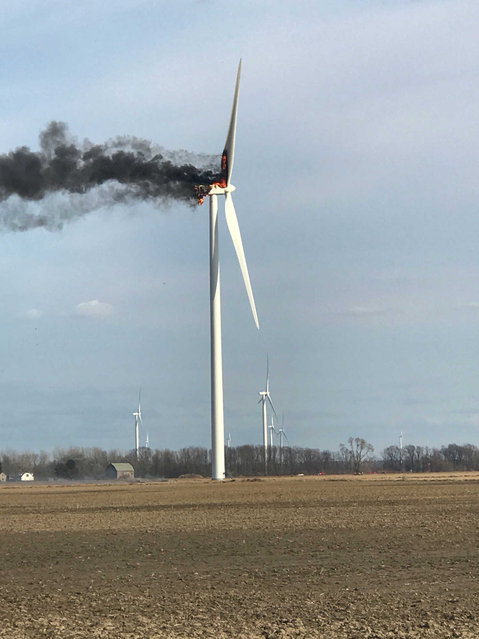 A fire burns at a wind turbine on Monday, April 1, 2019, near Elkton, Mich. The fire drew spectators who watched flaming debris fall to the ground, but no injuries were reported. Crews let the fire burn itself out. (Photo by Renee Willis/The Huron Daily Tribune via AP Photo) 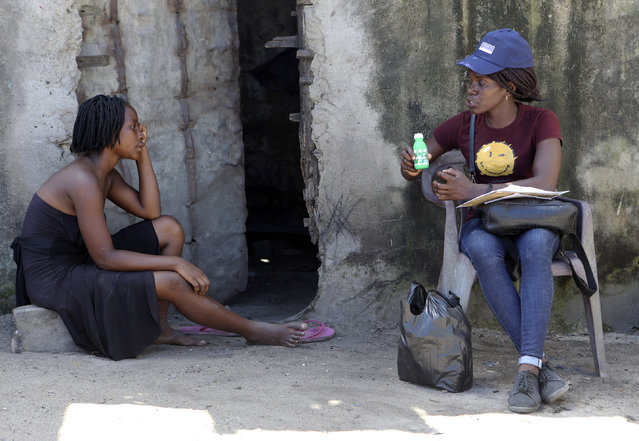 Health worker Mercy Porigadhi, right, explains the use of water purification medication during a vaccine and hygiene promotion targeting survivors of cyclone Idai in Beira, Mozambique, Tuesday, April, 2, 2019. Mozambican and international health workers raced Monday to contain a cholera outbreak in the cyclone-hit city of Beira and surrounding areas, where the number of cases has jumped to more than 1,000. (Photo by Tsvangirayi Mukwazhi/AP Photo) 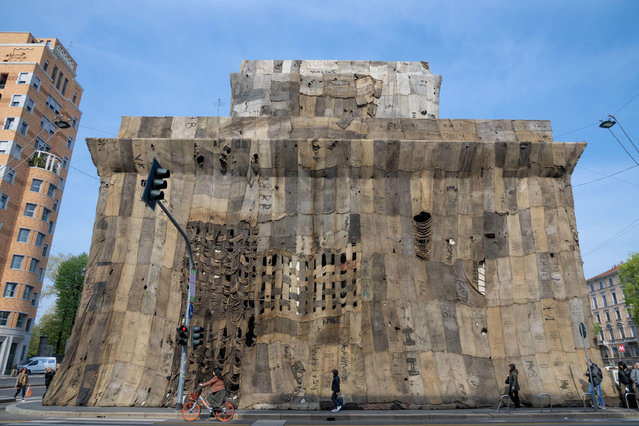 “A Friend”, an installation by the Ghanaian artist Ibrahim Mahama, which has the the toll gates of Porta Venezia covered in jute sacks as part of Milan Art Week in Milan, Italy on April 2, 2019. (Photo by Marco Passaro/IPA/SIPA Press/Shutterstock) 19th century's Porta Venezia historical gates are wrapped in jute sacks as part of the installation “A friend” by Ghanian artist Ibrahim Mahama, in the wake of Milan' Art Week, in Milan, Italy, Monday, April 1, 2019. (Photo by Daniel Dal Zennaro/ANSA via AP Photo) 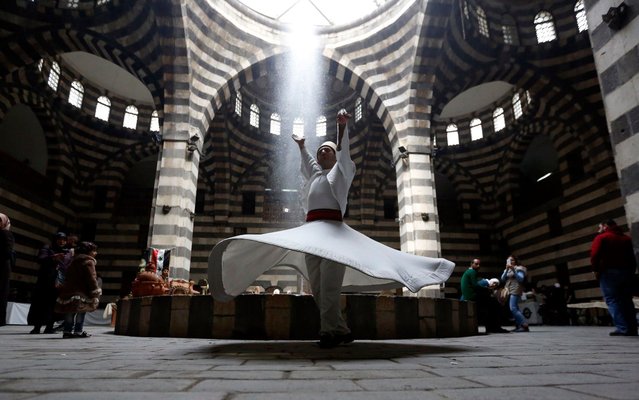 Dervish dancers performs during an event titled 'the Festival of the Syrian Bread held at Khan Asaad Basha in the old city of Damascus, Syria, on 01 April 2019 to commemorate the Syrian New Year according to the Syrian culture. The event is held under the auspices of the Syrian Tourism Ministry with the cooperation of the Union of Craftsmen. (Photo by Youssef Badawi/EPA/EFE) 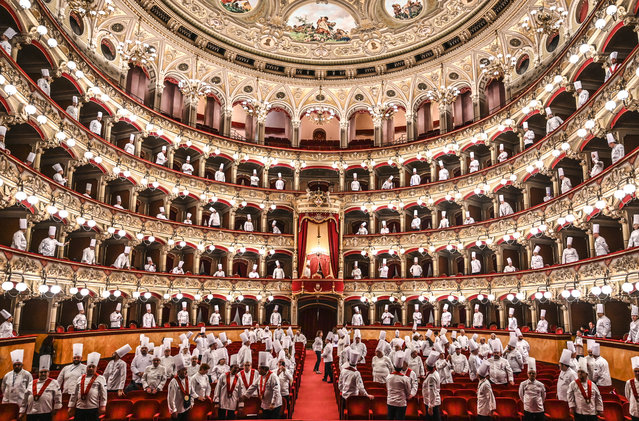 At theatre Vincenzo Bellini “Cibo Nostrum 2019”, the second day of the great feast of Italian cuisine to celebrate the culture of food and wine on April 01, 2019 in Catania, Italy. Organized by the Italian Cooks Federation, the 30th National Congress is held in Catania on 31 March, 1, 2 April 2019. (Photo by Fabrizio Villa/Getty Images) 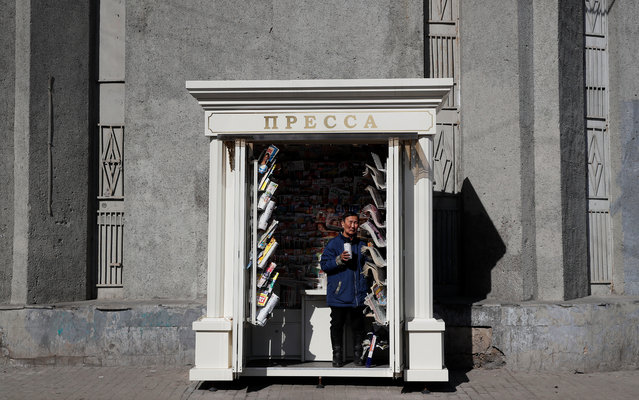 A newspaper vendor looks on in Moscow, Russia on April 2, 2019. (Photo by Maxim Shemetov/Reuters) 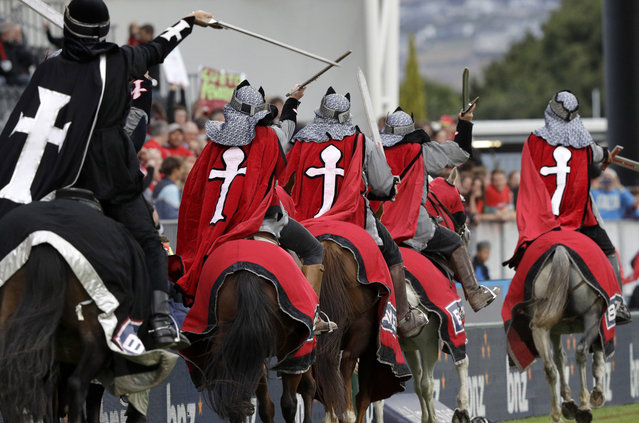 In this February 23, 2019, photo, the Crusader horseman ride around the arena prior to the start of the Super Rugby match between the Crusaders and Hurricanes in Christchurch, New Zealand. The Crusaders announced Wednesday, April 3, 2019, that they will be considering a change to their name and branding following the Christchurch terrorist attacks on March 15 – insisting the status quo is “no longer tenable”. (Photo by Mark Baker/AP Photo) 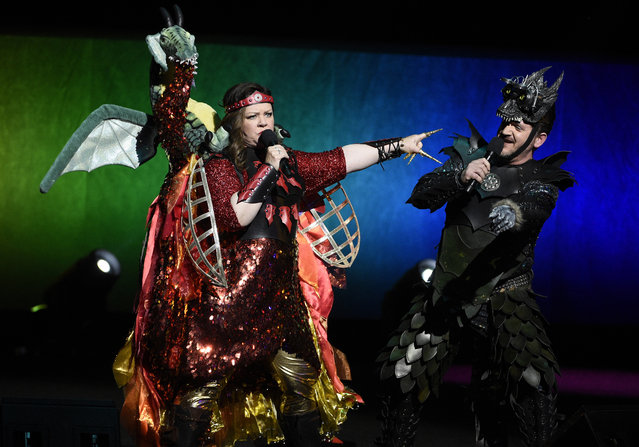 Melissa McCarthy, left, a cast member in the upcoming film “Superintelligence”, and her husband Ben Falcone, the film's director, arrive onstage in costume during the Warner Bros. presentation at CinemaCon 2019, the official convention of the National Association of Theatre Owners (NATO) at Caesars Palace, Tuesday, April 2, 2019, in Las Vegas. (Photo by Chris Pizzello/Invision/AP Photo) 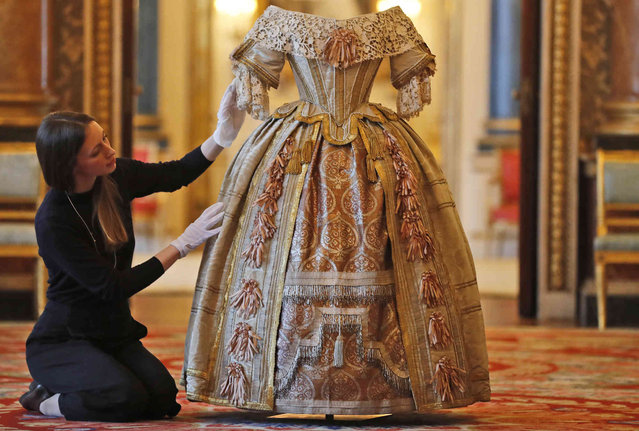 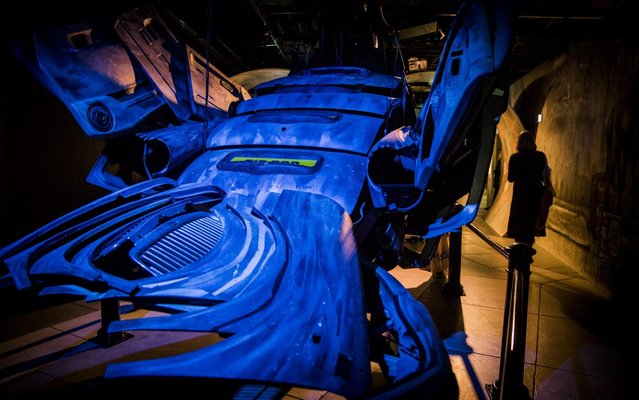 A pigeon sculpture created from parts from a London taxi goes on display during the “Beasts of London” exhibition press preview at Museum of London on April 02, 2019 in London, England. (Photo by Tristan Fewings/Getty Images) 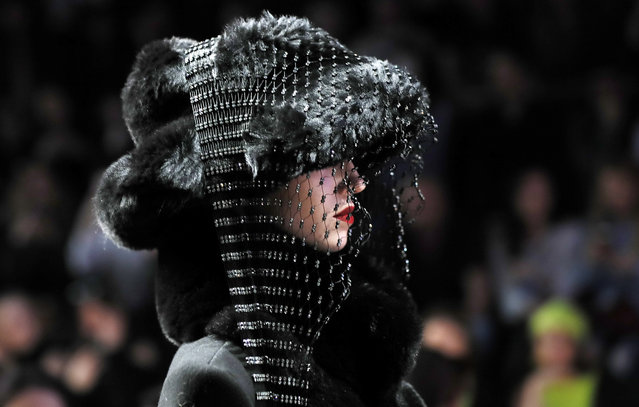