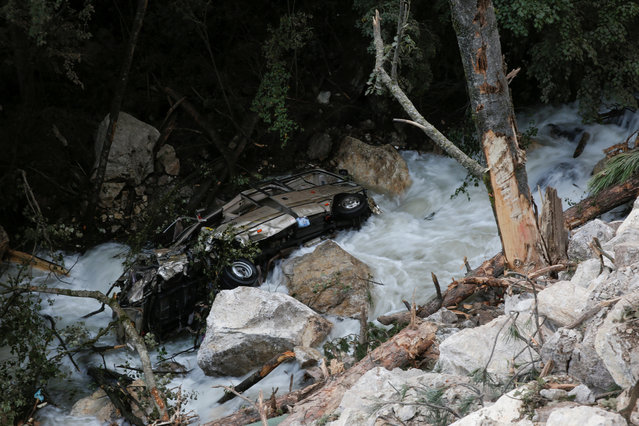 A car lies in a mountain creek beside a road that hit by a rockslide after an earthquake outside Jiuzhaigou, Sichuan province, China, August 10, 2017. (Photo by homas Peter/Reuters) 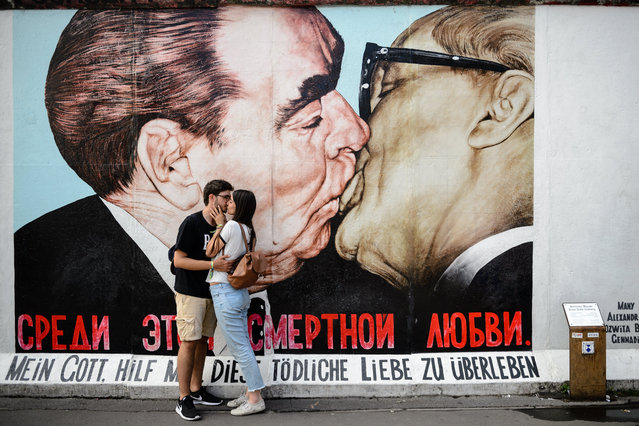 Tourists kiss in front of the graffiti painting “My God, Help Me to Survive This Deadly Love” by Russian Dmitri Vrubel at a section of the former Berlin Wall called the East Side Gallery in Berlin, Germany, 10 August 2017. The artwork also known as the “Fraternal Kiss” (“Bruderkuss” in German) depicts the kissing communist leaders Leonid Brezhnev of the Soviet Union and Erich Honecker of the GDR. The former East German communist regime started the construction of the Berlin Wall on 13 August 1961, 56 years ago. The Wall came down on 09 November 1989. (Photo by Jens Schlueter/EPA) 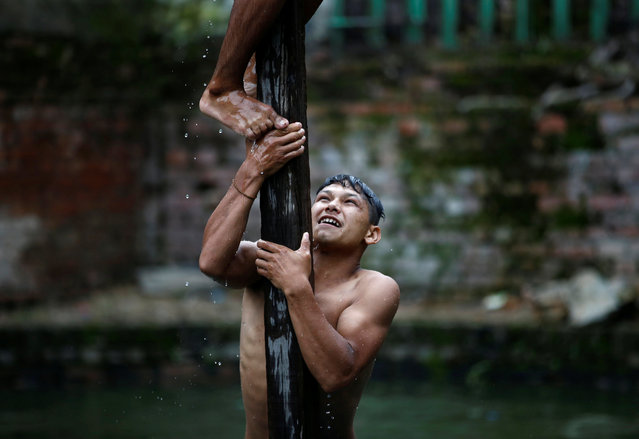 A devotee helps his friend to climb the wooden pole in between the pond while participating in the Deopokhari festival in Khokana, Nepal August 9, 2017. During the annual festival, a live goat is thrown into a pond and the team of devotees that retrieves the animal first wins. (Photo by Navesh Chitrakar/Reuters) 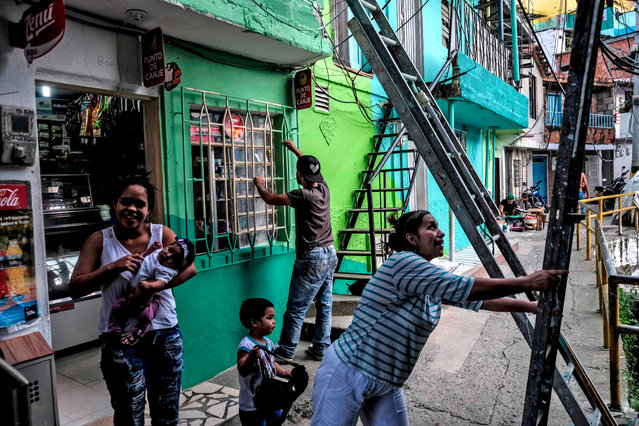 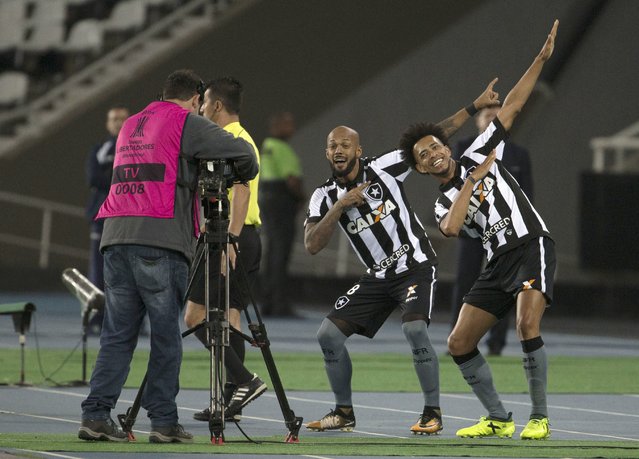 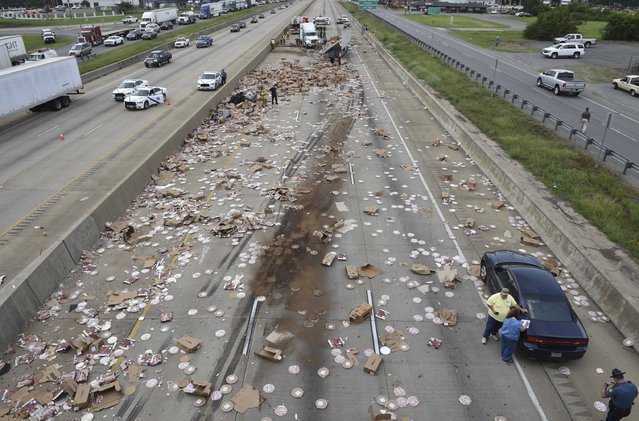 This Wednesday, August 9, 2017, photo provided by the Arkansas Department of Transportation shows Arkansas highway Interstate 30, a cross-country route that was shut down in both directions for a time Wednesday, after an 18-wheeler was sliced open during an crash and spilled frozen pizzas across the road south of Little Rock, Ark. The interstate, was closed for several hours while crews cleaned up the mess. (Photo by Rusty Hubbard/Arkansas Department of Transportation via AP Photo) 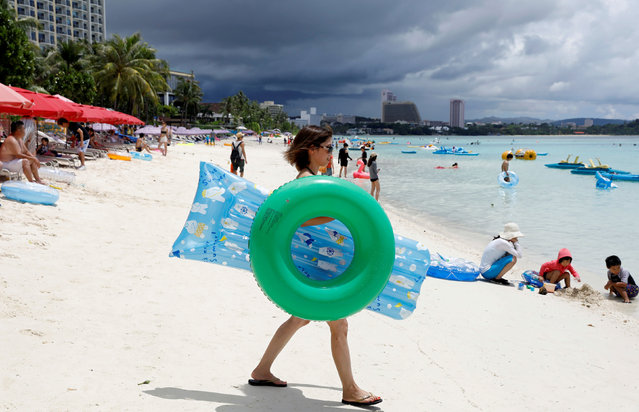 Tourists frolic along the Tumon beach on the island of Guam, a U.S. Pacific Territory, August 10, 2017. North Korea said it is finalizing a plan to launch a salvo of four ballistic missiles off the shores of the U.S. territory of Guam, the latest provocation in the war of words between Pyongyang and Washington. (Photo by Erik De Castro/Reuters) 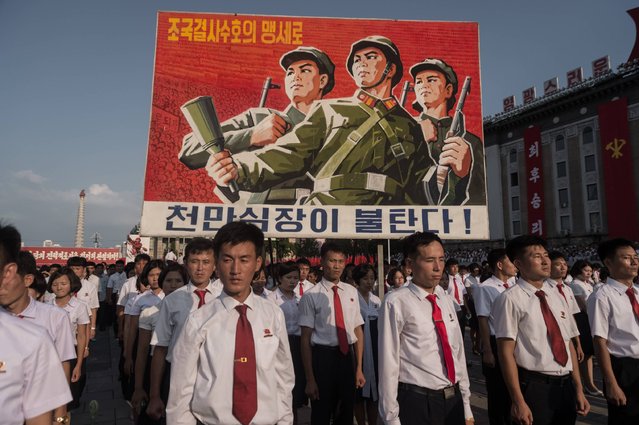 A propaganda poster is diplsyed during a rally in support of North Korea's stance against the US, on Kim Il-Sung square in Pyongyang on August 9, 2017. US President Donald Trump said the United States' nuclear arsenal was “more powerful than ever” in a fresh warning to North Korea over its repeated missile tests. (Photo by Kim Won-Jin/AFP Photo) 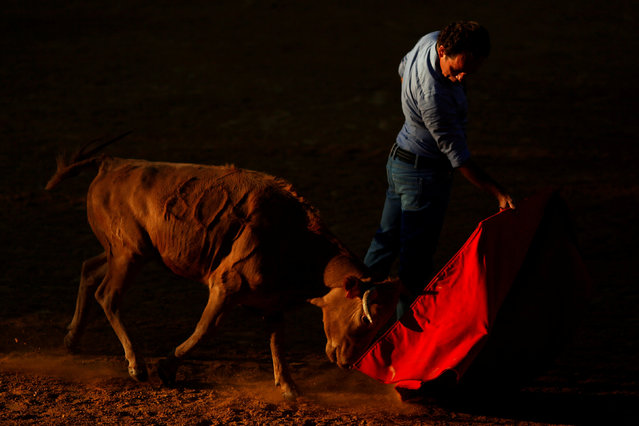 Spanish bullfighter Rafael Tejada performs a pass to a heifer during a “tentadero” (a small bullfight to check the bravery of heifers which are not killed) at Reservatauro Ronda cattle ranch in Ronda, near Malaga, southern Spain August 9, 2017. (Photo by Jon Nazca/Reuters) 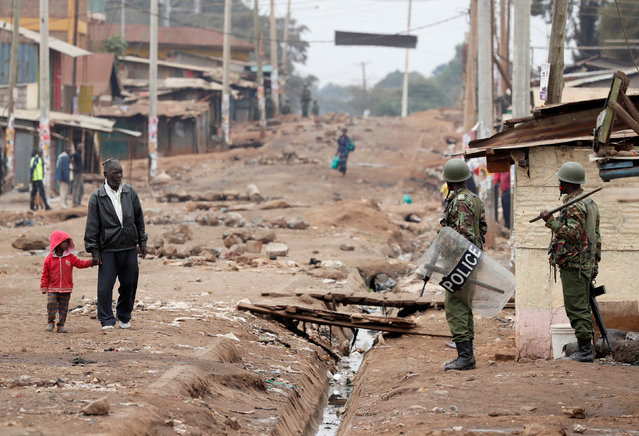 A man walks with a child as he passes policemen in Kawangware slum in Nairobi, Kenya, August 10, 2017. (Photo by Goran Tomasevic/Reuters) 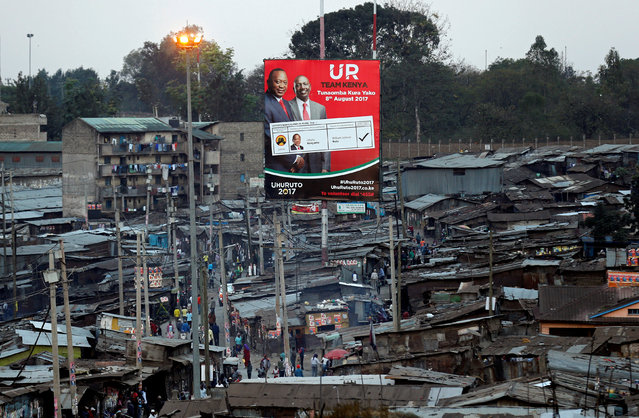 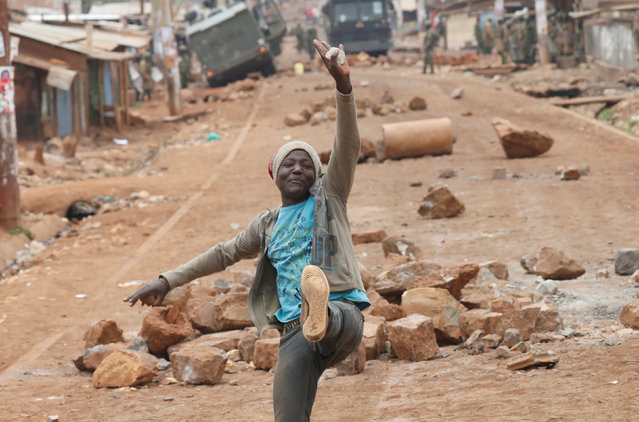 A supporter of opposition leader Raila Odinga gestures in front of a barricade in Kawangware slum in Nairobi, Kenya, August 10, 2017. (Photo by Goran Tomasevic/Reuters) 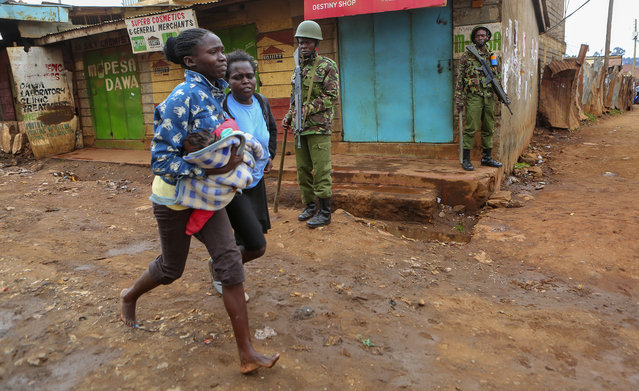 A woman carrying her child runs for safety as protesters in support of Kenyan opposition leader and presidential candidate Raila Odinga, engage in running battles with the police, in Kawangware area, Nairobi, Kenya, Thursday August 10, 2017. International observers on Thursday urged Kenyans to be patient as they awaited final election results following opposition allegations of vote-rigging, but clashes between police and protesters again erupted in a Nairobi slum. (Photo by Brian Inganga/AP Photo) 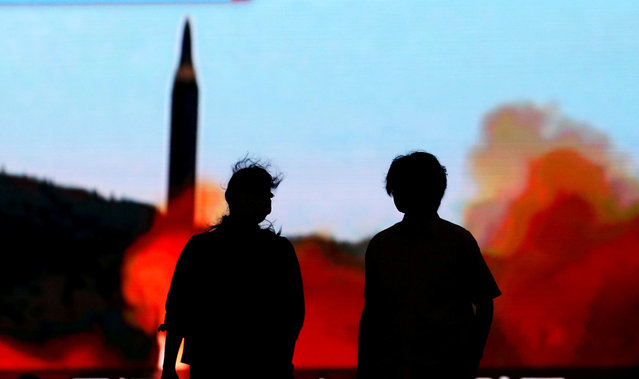 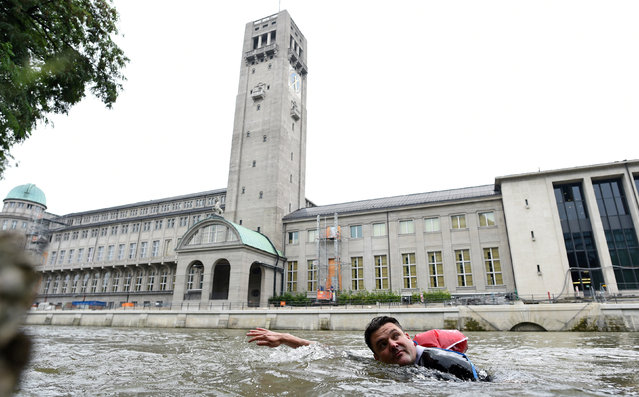 Benjamin David passes the Deutsches Museum as he swims from his home to his workplace along the Isar River in Munich, Germany, August 10, 2017. (Photo by Andreas Gebert/Reuters) 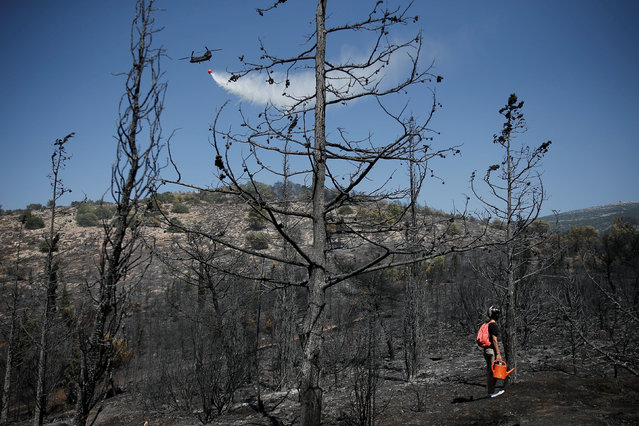 A Chinook helicopter makes a water drop during a wildfire as a local holding a watering can stands among burned trees in Athens, Greece, August 10, 2017. (Photo by Alkis Konstantinidis/Reuters) 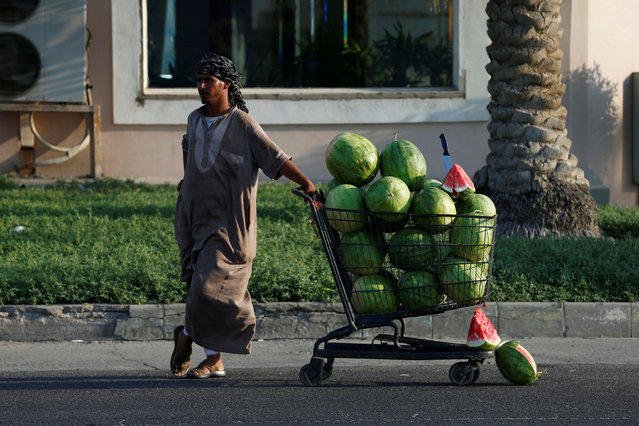 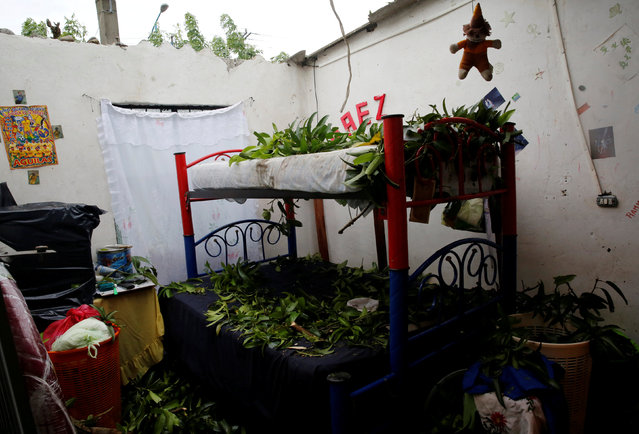 Branches and debris are seen in beds in a home damaged after the passing of Hurricane Franklin, in Vega De alatorre in Veracruz state, Mexico, August 10, 2017. (Photo by Henry Romero/Reuters) 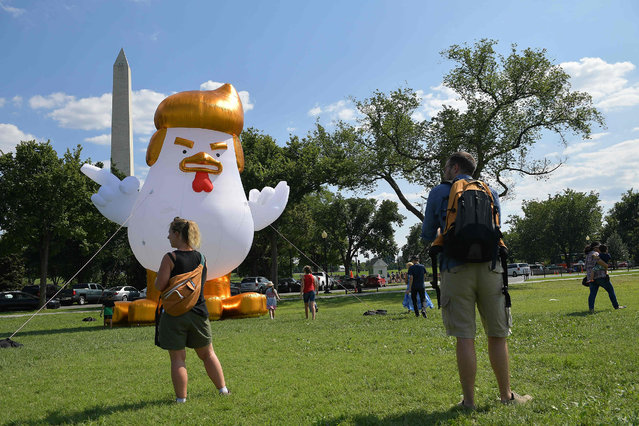 An inflatable chicken mimicking US President Donald Trump is set up on The Ellipse, a 52-acre (21-hectare) park located just south of the White House and north of the Washington Monument (rear) on August 9, 2017. (Photo by Mandel Ngan/AFP Photo) 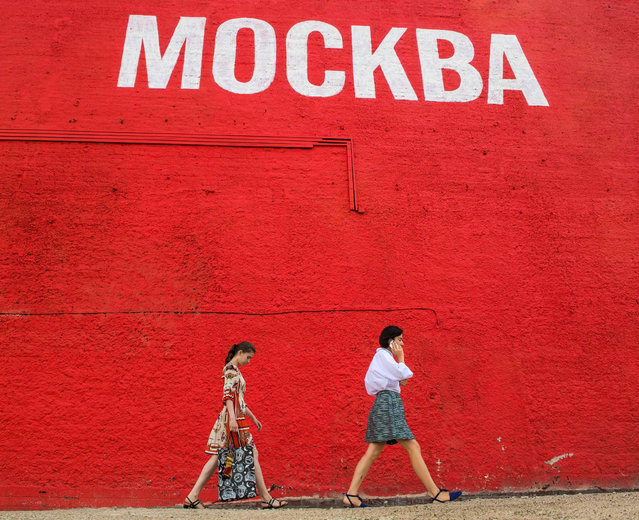 Pedestrians walk past the word “Moscow” in cyrillic alphabet as a wall is painted with an advert for a non- alcoholic beer ahead of the FIFA World Cup August 10, 2017 in downtown Moscow, Russia. (Photo by Mladen Antonov/AFP Photo) Revellers attend the 25th edition of the Sziget Festival on August 9, 2017 in Budapest, Hungary. The Sziget Festival, one of the largest music and cultural festivals in Europe, celebrates its 25th anniversary in 2017, taking place from August 9-16 on the Hajogyari Sziget in Budapest. (Photo by Sandor Csudai/Rockstar Photographers) 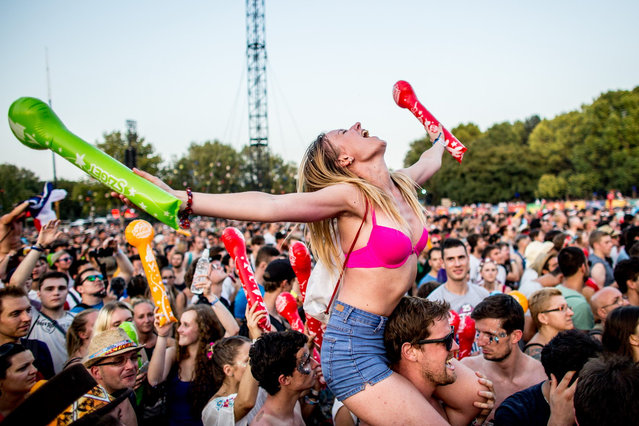 Revellers attend the 25th edition of the Sziget Festival on August 9, 2017 in Budapest, Hungary. (Photo by Sandor Csudai/Rockstar Photographers) 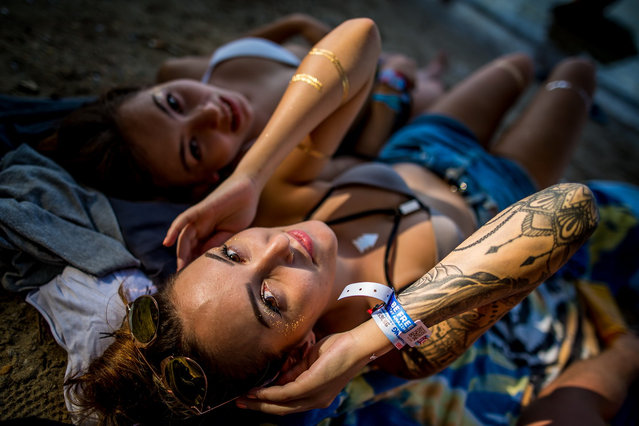 Revellers attend the 25th edition of the Sziget Festival on August 9, 2017 in Budapest, Hungary. (Photo by Laszlo Mudra/Rockstar Photographers) 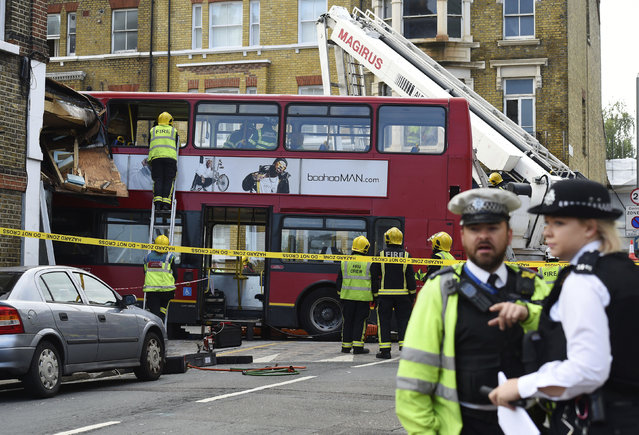 Emergency services personnel check a crashed double-decker bus in Lavender Hill, southwest London Thursday August 10, 2017. Transit officials said the bus was heading for the city's Waterloo station when it careened through the plate glass window of a kitchen shop on Thursday morning. (Photo by Lauren Hurley/PA via AP Photo) 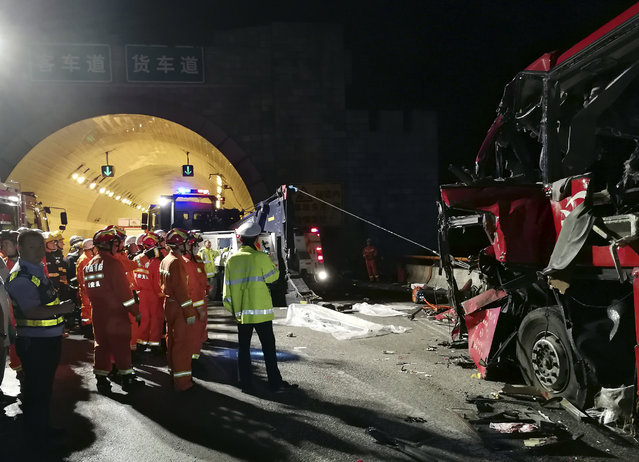 In this photo released by China's Xinhua News Agency, first responders work at the site of an accident after a coach hit the wall of the Qinling Mountains No. 1 Tunnel on the Jingkun Expressway in Ningshan County, northwestern China's Shaanxi Province, Friday, August 11, 2017. The passenger coach crashed into the wall of the expressway tunnel in China's northwest, killing dozens and injuring others, official media reported Friday. (Photo by Xinhua via AP Photo) 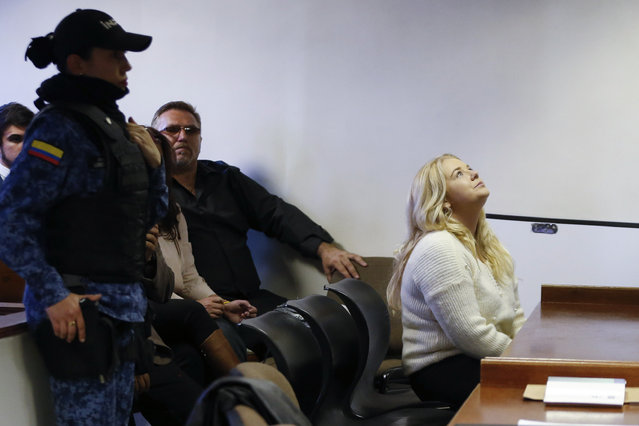 In this Wednesday, August 9, 2017 photo, Australian Cassandra Sainsbury attends a court hearing in Bogota, Colombia. The 22-year-old was detained April 12 at Bogota's international airport when caught trying to smuggle about 6 kilos of cocaine inside packages of headphones. (Photo by Fernando Vergara/AP Photo) 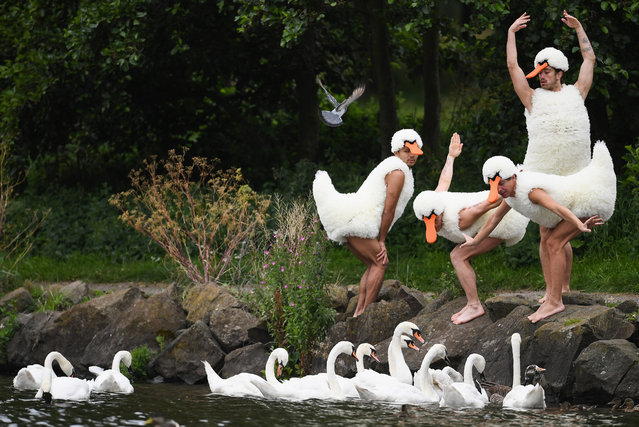 Dancers from “Tutu”, perform at St Margaret's Loch in their spoof Swan Lake costumes on August 10, 2017 in Edinburgh, Scotland. Their Edinburgh Festival Fringe show is an invitation to those who love dance to experience familiar favourites, in an opportunity to explore some of the most famous and significant works in the repertoire from Swan Lake to Pina Bausch in a fun way with with a twist. (Photo by Jeff J. Mitchell/Getty Images)
Edit Del
11 Aug 2017 07:41:00, post received 0 comments
Publication archive:
←   →
Popular tags:
All tags
Last searches: