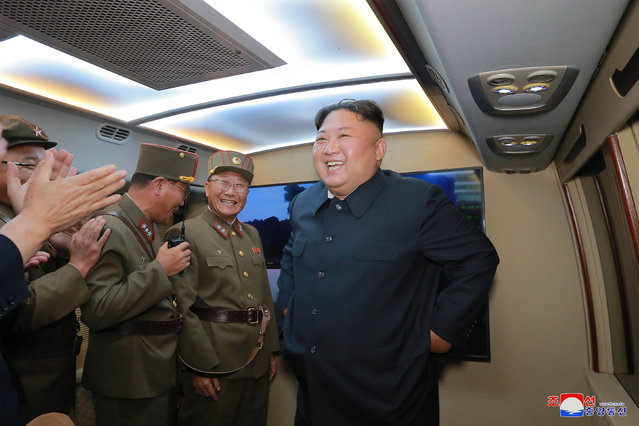 In this Tuesday, August 6, 2019, file photo provided by the North Korean government, North Korean leader Kim Jong Un, right, visits an airfield in the western area of North Korea to watch its weapons demonstrations. North Korea on Friday, Aug. 9, 2019 said that its rubber-stamp parliament will hold its second meeting of the year on Aug. 29. It follows weeks of intensified North Korean weapons tests and belligerent statements over U.S.-South Korea military exercises and the slow pace of nuclear negotiations with the United States. Independent journalists were not given access to cover the event depicted in this image distributed by the North Korean government. The content of this image is as provided and cannot be independently verified. Korean language watermark on image as provided by source reads: “KCNA” which is the abbreviation for Korean Central News Agency. (Photo by Korean Central News Agency/Korea News Service via AP Photo/File) 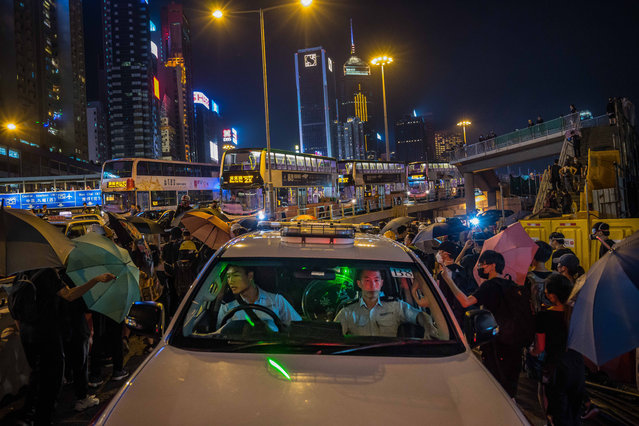 Protestors shine a laser light into a police vehicle during a protest in the Causeway Bay district on August 04, 2019 in Hong Kong, China. Pro-democracy protesters have continued rallies on the streets of Hong Kong against a controversial extradition bill since 9 June as the city plunged into crisis after waves of demonstrations and several violent clashes. Hong Kong's Chief Executive Carrie Lam apologized for introducing the bill and declared it “dead”, however protesters have continued to draw large crowds with demands for Lam's resignation and completely withdraw the bill. (Photo by Billy H.C. Kwok/Getty Images) 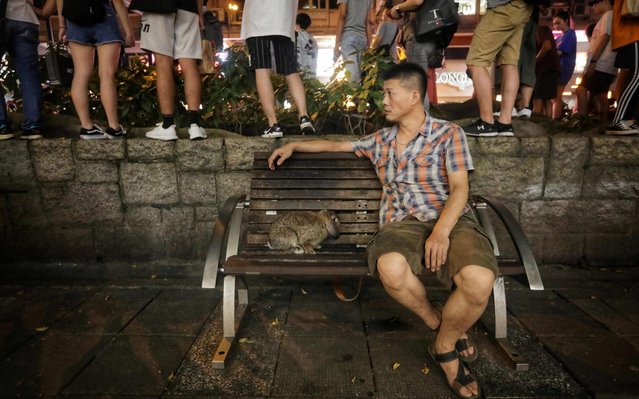 A man sits on a park bench with his pet rabbit as protesters gather in the Tsim Sha Tsui district after taking part in a rally against a controversial extradition bill in Hong Kong on August 10, 2019. Police in Hong Kong fired tear gas on August 10 at pro-democracy protesters who defied orders to cancel a rally and blocked intersections across the city in “hit-and-run” demonstrations. (Photo by Vivek Prakash/AFP Photo) 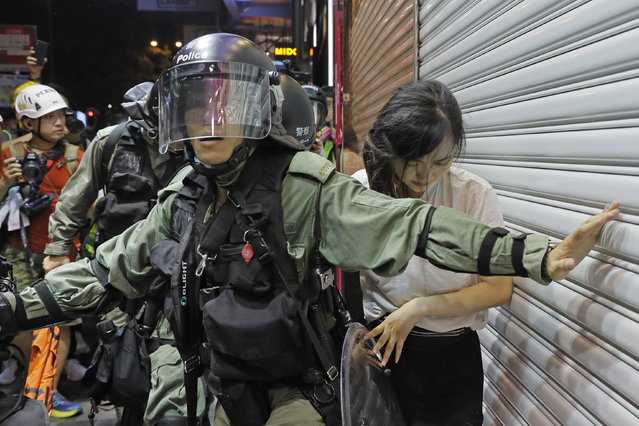 Police detain a girl during a confrontation in Hong Kong on Saturday, August 10, 2019. Hong Kong is in its ninth week of demonstrations that began in response to a proposed extradition law but have expanded to include other grievances and demands for more democratic freedoms. (Photo by Kin Cheung/AP Photo) 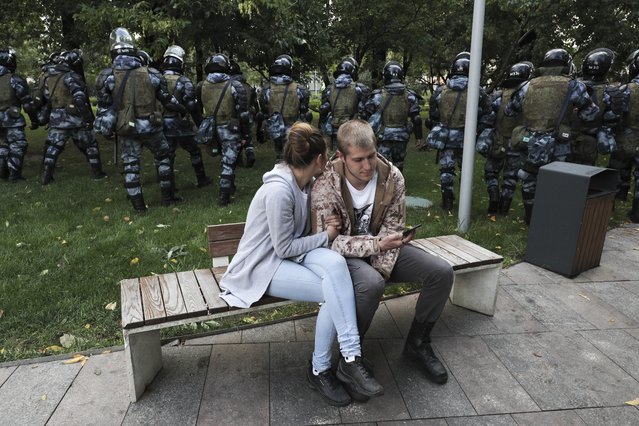 A couple sit in a boulevard as police walk to prevent protesters during a rally in Moscow, Russia, Saturday, August 10, 2019. Tens of thousands of people rallied in central Moscow for the third consecutive weekend to protest the exclusion of opposition and independent candidates from the Russian capital's city council ballot. (Photo by AP Photo/Stringer) 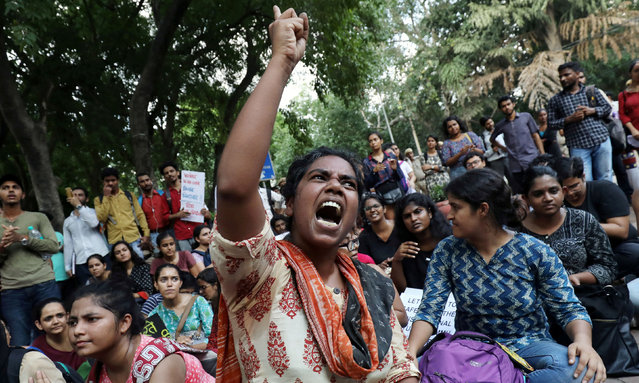 A student shouts slogans during a protest against the scrapping of the special constitutional status for Kashmir by the government, in New Delhi, India, August 8, 2019. (Photo by Anushree Fadnavis/Reuters) 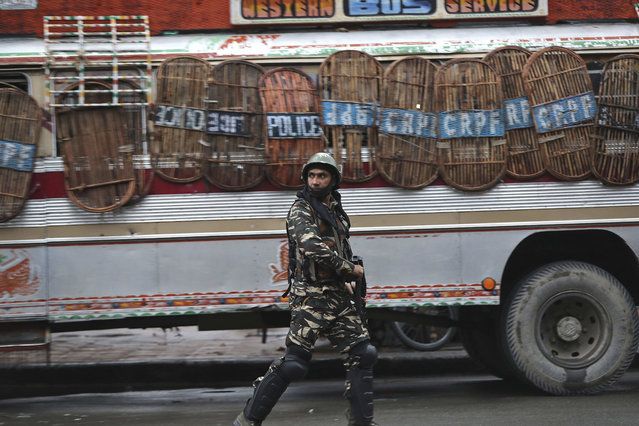 An Indian paramilitary soldier patrols a street in Srinagar, Indian controlled Kashmir, Saturday, August 10, 2019. Authorities enforcing a strict curfew in Indian-administered Kashmir will bring in trucks of essential supplies for an Islamic festival next week, as the divided Himalayan region remained in a lockdown following India's decision to strip it of its constitutional autonomy. The indefinite 24-hour curfew was briefly eased on Friday for weekly Muslim prayers in some parts of Srinagar, the region's main city, but thousands of residents are still forced to stay indoors with shops and most health clinics closed. All communications and the internet remain cut off. (Photo by Mukhtar Khan/AP Photo) 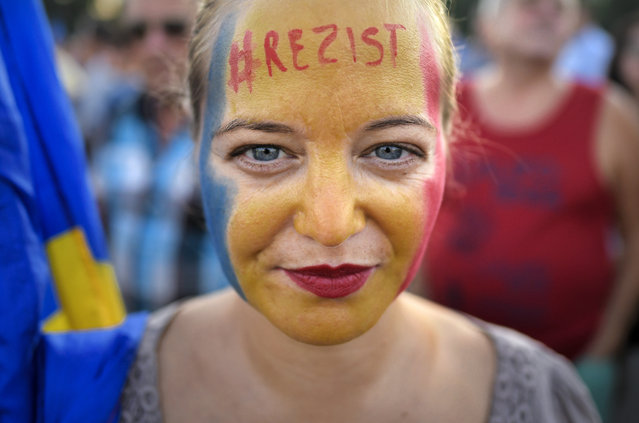 A woman with the Romanian flag colors and the word “Resist” painted on her face takes part in an anti-government protest in Victoria Square, outside the government headquarters in Bucharest, Romania, Saturday, August 10, 2019. Thousands joined a protest, demanding the resignation of the government, one year after a similar rally turned violent and left dozens of participants and members of the riot police injured. (Photo by Andreea Alexandru/AP Photo) 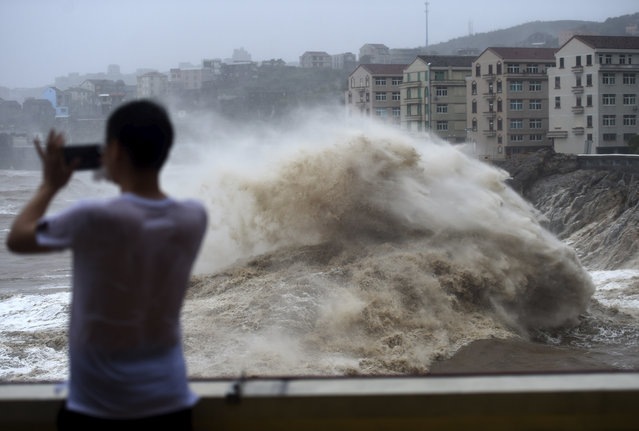 In this August 9, 2019, photo released by Xinhua News Agency, a man uses his mobile phone to record waves crashing on the shore as typhoon Lekima approaches the Shitang Township of Wenling City in eastern China's Zhejiang Province. Typhoon Lekima stuck the coast south of Shanghai, knocking down houses and trees. (Photo by Han Chuanhao/Xinhua News Agency via AP Photo) 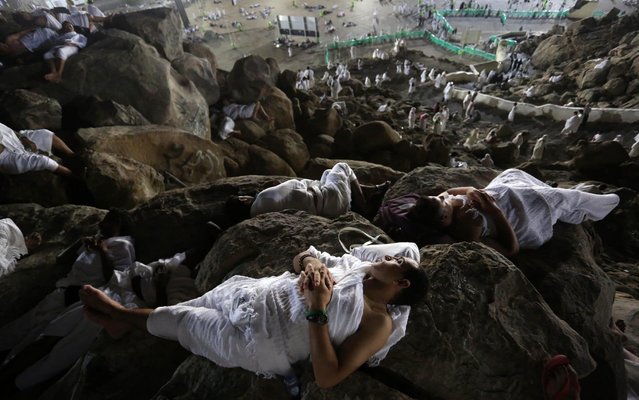 Muslim pilgrims rests on Mount Arafat as they take part in one of the Hajj rituals in Saudi Arabia on August 10, 2019. Arafat is the site where Muslims believe the Prophet Mohammed gave his last sermon about 14 centuries ago after leading his followers on the pilgrimage. The ultra-conservative kingdom, which is undergoing dramatic social and economic reforms, has mobilised vast resources for the six-day journey, one of the five pillars of Islam. (Photo by APA Images/Shutterstock) 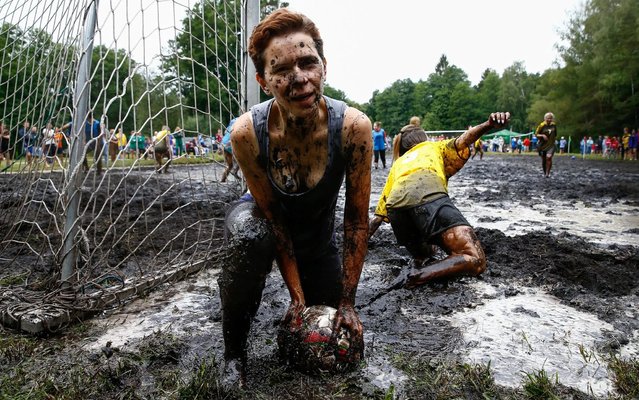 Women compete for the ball in the mud during a swamp soccer game near the village of Dombrovka, Belarus on August 10, 2019. (Photo by Vasily Fedosenko/Reuters) 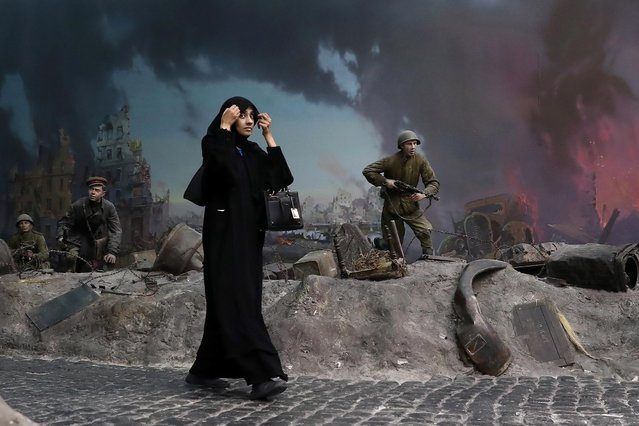 A visitor views a diorama depicting the WWII Battle of Berlin at the Victory Museum at the Poklonnaya Gora War Memorial in Moscow, Russia on August 9, 2019. (Photo by Anton Novoderezhkin/TASS) 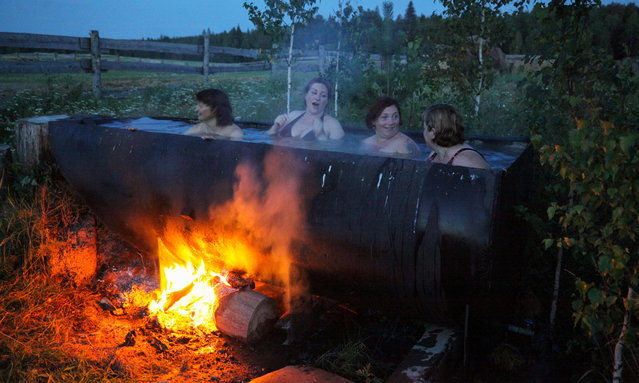 Latvian women bath in a huge tub heated by a bonfire in the village of Bobrovka, some 350 km of Omsk, on July 31, 2019. The people of the remote Siberian village Bobrovka call it the “Little Latvia of the Taiga”, where Baltic traditions continue more than 100 years after settlers from the region first arrived. (Photo by Alexei Malgavko/AFP Photo)