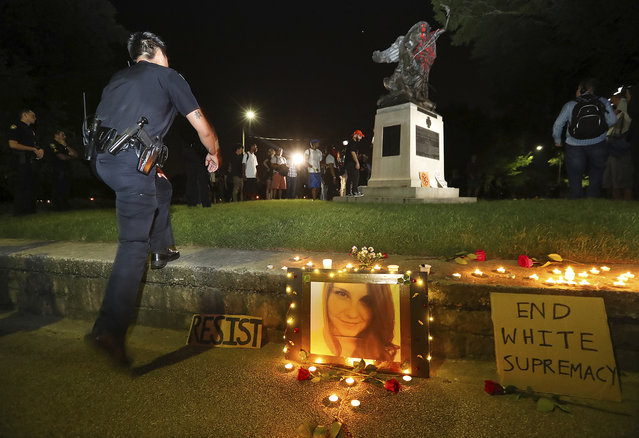 Police move in to Piedmont Park to prevent protesters from toppling a Confederate monument with a chain after they spray-painted it, Sunday, August 13, 2017, in Atlanta. The peace monument at the 14th Street entrance depicts a angel of peace stilling the hand of a Confederate soldier about to fire his rifle. Protesters decrying hatred and racism converged around the country on Sunday, saying they felt compelled to counteract the white supremacist rally that spiraled into deadly violence in Virginia. (Photo by Curtis Compton/Atlanta Journal-Constitution via AP Photo) 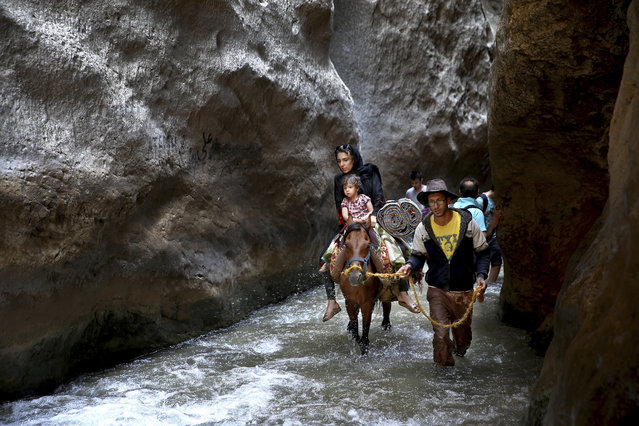 In this Monday, August 7, 2017, photo, a man leads his horse as two tourists ride in the river streaming between two cliffs at Tangeh Vashi canyon, just 99 miles (160 kilometers) north of Tehran, Iran. In a one-day excursion near the Iranian capital to escape the August heat in Tangeh Vashi, a canyon with an ice-cold mountain river streaming through, and a summer destination for many residents of the capital as well as neighboring provinces of Tehran. (Photo by Ebrahim Noroozi/AP Photo) 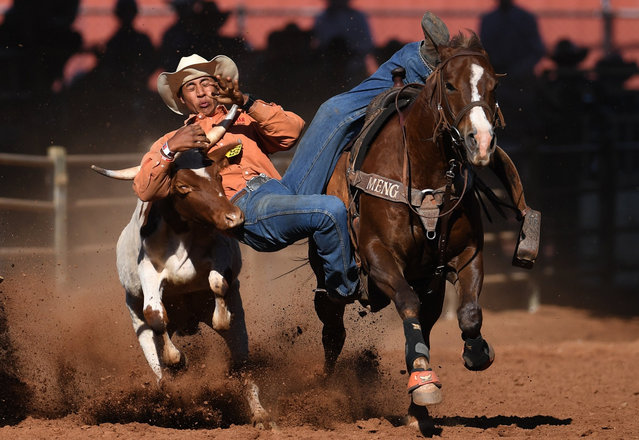 A competitor takes part in a Steer Wrestling competition at the Mount Isa Rodeo, Queensland, Australia, 11 August 2017. The event, in the remote outback town of Mount Isa, is the biggest rodeo in the Southern Hemisphere. (Photo by Dan Peled/EPA) 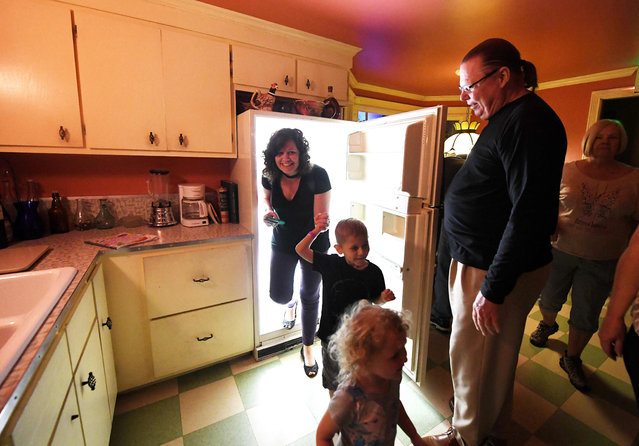 The Meow Wolf tourist attraction which has been described as an “immersive, multimedia experiences” at its location in an old bowling alley in Santa Fe, New Mexico on July 31, 2017. Part Disney, part Burning Man, with elements of Dr Who' s TARDIS, a kids' assault course and the set of a weird game show thrown in, the Meow Wolf attraction is bringing in hundreds of thousands of visitors to Sante Fe. (Photo by Mark Ralston/AFP Photo) 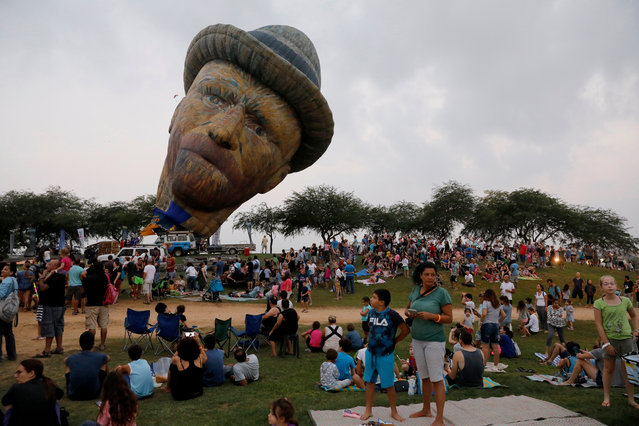 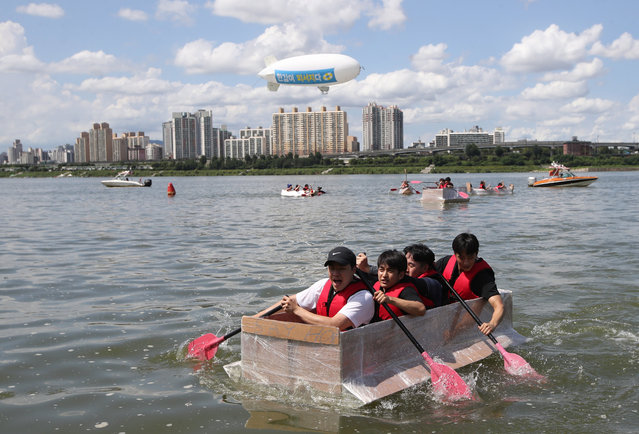 A team rows in its paper ship in an annual paper ship-riding contest on the Han River in Seoul, South Korea, 11 August 2017. (Photo by EPA/Yonhap) 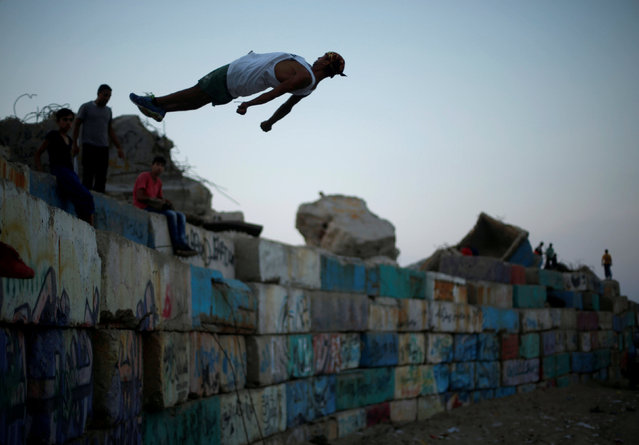 A Palestinian youth demonstrates his parkour skills at the seaport of Gaza City August 11, 2017. (Photo by Mohammed Salem/Reuters) 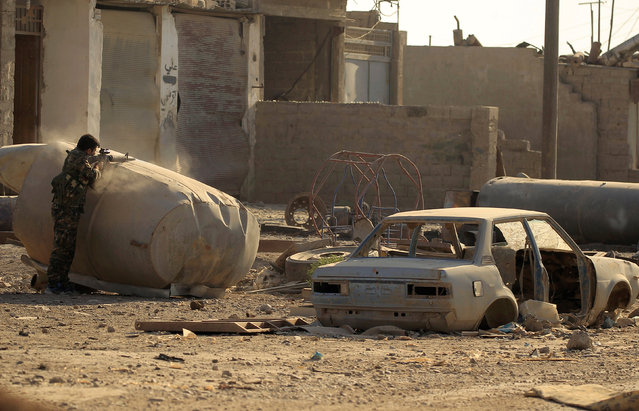 A member of the Syrian Democratic Forces shoots to detonate a mine found on their road during the fighting with Islamic State militants in Raqqa, Syria August 11, 2017. (Photo by Zohra Bensemra/Reuters) 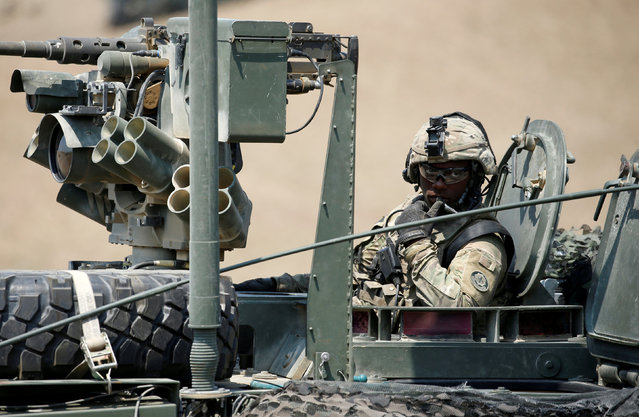 Supporters of opposition leader Raila Odinga duck for cover as they come under fire from Kenyan security forces in the Kibera slum of Nairobi, Kenya, Saturday August 12, 2017. Violent demonstrations have erupted in some areas after President Uhuru Kenyatta was declared victorious of the presidential election. (Photo by Jerome Delay/AP Photo) 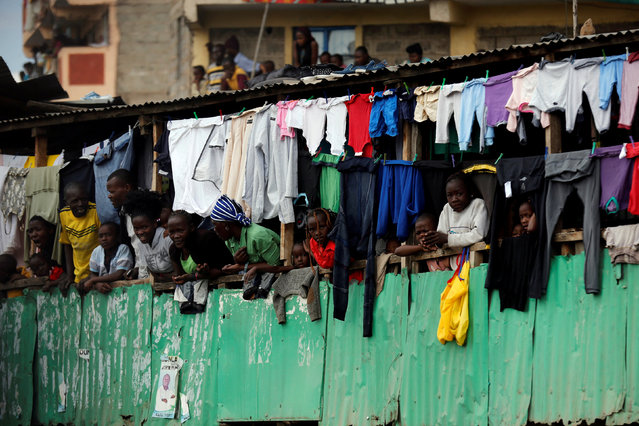 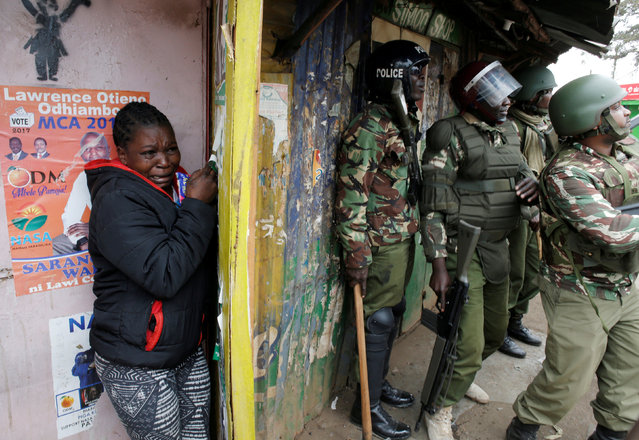 A woman cries as she stand behind policemen during clashes between supporter of opposition leader Raila Odinga and policemen in Kibera slum in Nairobi, Kenya, August 12, 2017. (Photo by Goran Tomasevic/Reuters) 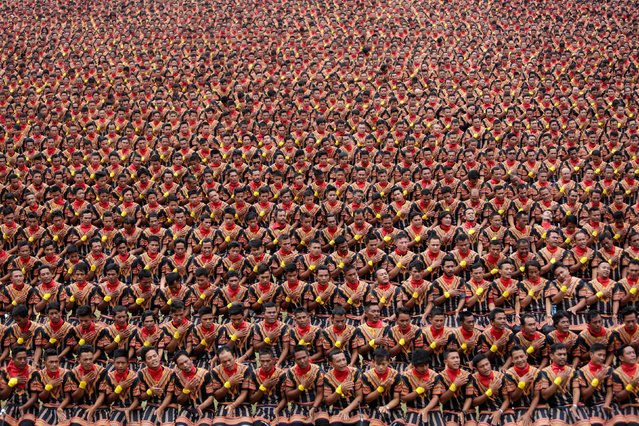 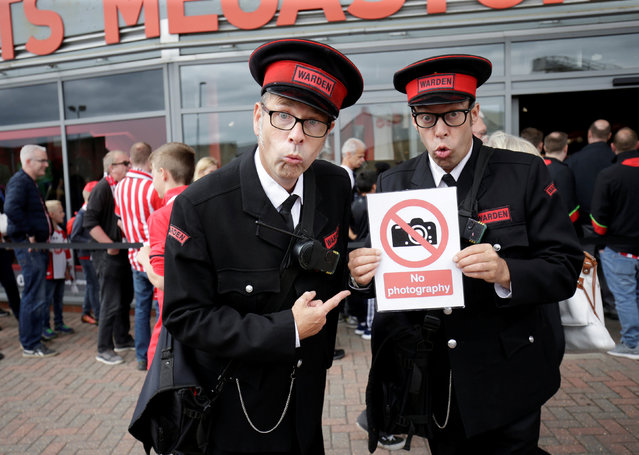 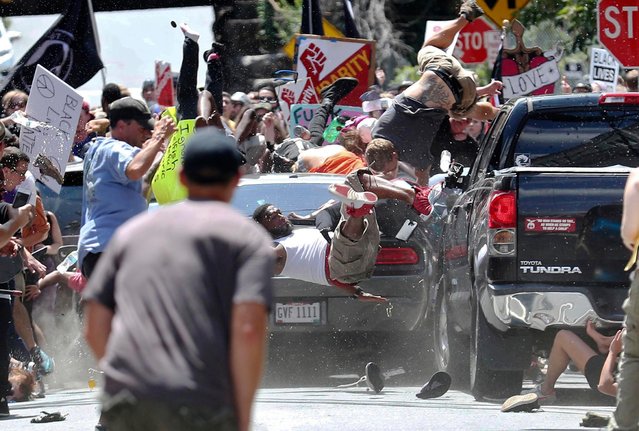 People fly into the air as a vehicle drives into a group of protesters demonstrating against a white nationalist rally in Charlottesville, Va., Saturday, August 12, 2017. The nationalists were holding the rally to protest plans by the city of Charlottesville to remove a statue of Confederate Gen. Robert E. Lee. There were several hundred protesters marching in a long line when the car drove into a group of them. (Photo by Ryan M. Kelly/The Daily Progress via AP Photo) 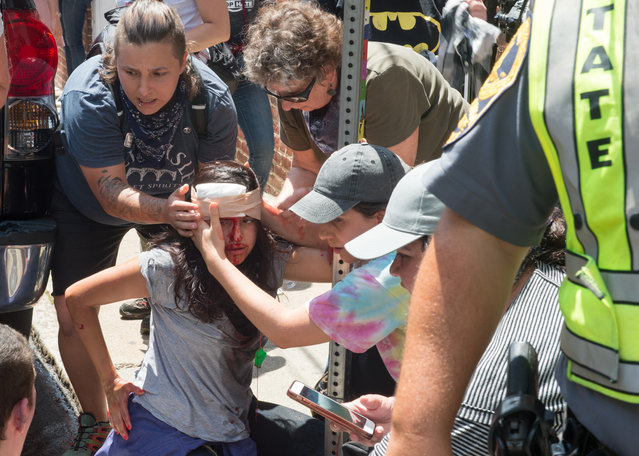 People receive first-aid after a car accident ran into a crowd of protesters in Charlottesville, VA on August 12, 2017. A picturesque Virginia city braced Saturday for a flood of white nationalist demonstrators as well as counter-protesters, declaring a local emergency as law enforcement attempted to quell early violent clashes. (Photo by Paul J. Richards/AFP Photo) 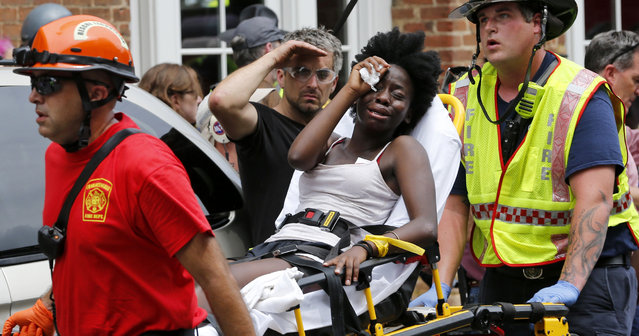 Rescue personnel help an injured woman after a car ran into a large group of protesters after an white nationalist rally in Charlottesville, Va., Saturday, August 12, 2017. The nationalists were holding the rally to protest plans by the city of Charlottesville to remove a statue of Confederate Gen. Robert E. Lee. There were several hundred protesters marching in a long line when the car drove into a group of them. (Photo by Steve Helber/AP Photo) 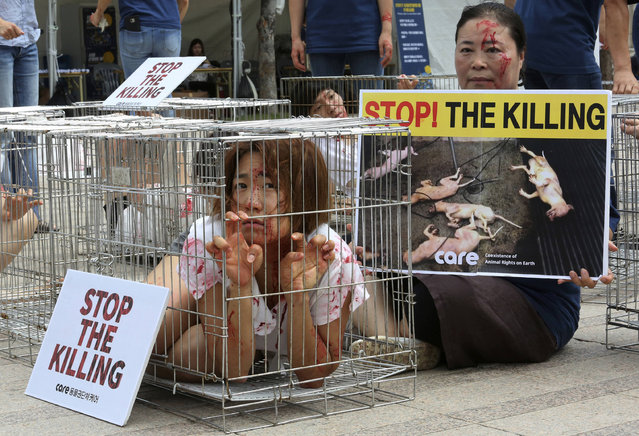 A South Korean animal rights activist confines herself in a cage during a campaign opposing South Korea's culture of eating dog meat in Seoul, South Korea, Friday, August 11, 2017. Some of South Koreans traditionally eat dog meat on Aug. 11, with the belief that it boosts stamina and virility and will help them endure the heat of summer. (Photo by Ahn Young-joon/AP Photo) 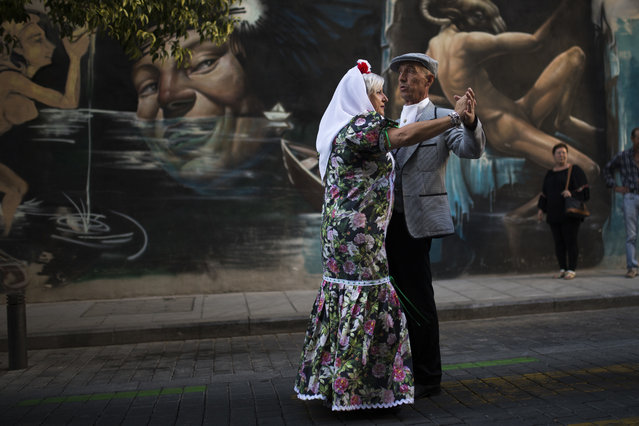 A couple dressed in traditional “chulapo” attire, typical in Madrid, dance as they take part in a religious procession during festivities in honor of local patron San Lorenzo, Saint Lawrence, in Madrid, Thursday, August 10, 2017. The festivities are part of a week-long street fiesta which includes dancing eating and drinking along with cultural events and religious processions. (Photo by Francisco Seco/AP Photo) 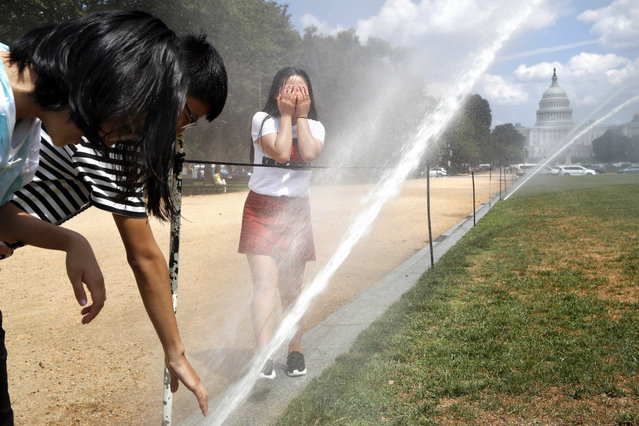 Students visiting from Xining, China, who gave their names as, from left, Maxinya, 14, Lizhengnan, 14, and Lucy, 15, react to the spray coming from large sprinklers watering the lawn of the National Mall as part of turf restoration efforts, Thursday, August 10, 2017, in Washington. (Photo by Jacquelyn Martin/AP Photo) 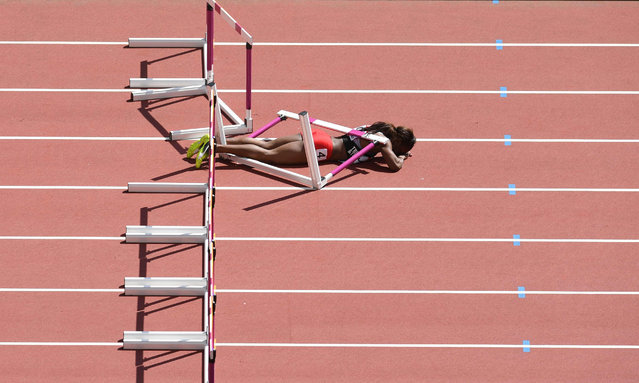 Trinidad and Tobago's Deborah John lies on the track after falling in the women's 100m hurdles athletics event at the 2017 IAAF World Championships at the London Stadium in London on August 11, 2017. (Photo by Glyn Kirk/AFP Photo) 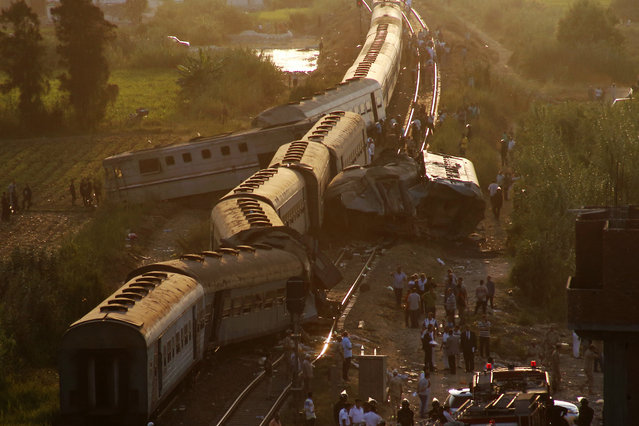 Two trains are seen after they collided just outside Egypt's Mediterranean port city of Alexandria, Friday, August 11, 2017, killing at least dozens of people and injuring over 100 in the country's deadliest rail accident in more than a decade. (Photo by Ravy Shaker/AP Photo) 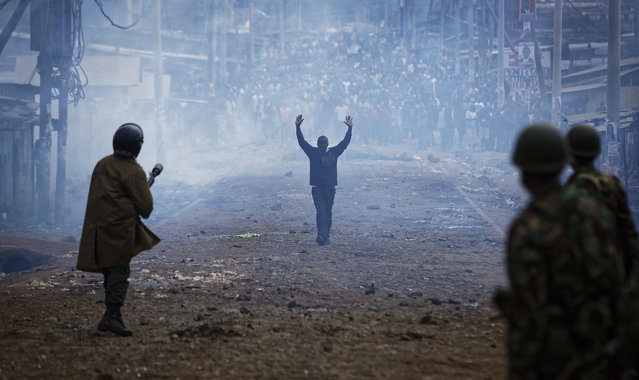 A man seeking safety walks with his hands in the air through a thick cloud of tear gas towards riot police, as they clash with protesters throwing rocks in the Kawangware slum of Nairobi, Kenya Thursday, August 10, 2017. International observers on Thursday urged Kenyans to be patient as they awaited final election results following opposition allegations of vote-rigging, but clashes between police and protesters again erupted in Nairobi. (Photo by Ben Curtis/AP Photo) 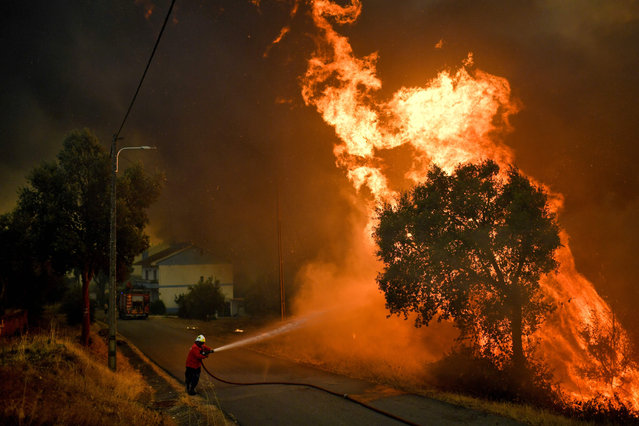 A firefighter tackles a wildfire close to the village of Pucarica in Abrantes on August 10, 2017. Nearly 3,000 firefighters battled 80 wildfires raging across Portugal civil protection officials said, as the return of scorching heat put an end to the respite after a spate of blazes. Some 650 firefighters backed by nine water-dropping aircraft and over 200 vehicles were at the scene of the biggest blaze in a forest near the central town of Abrantes. (Photo by Patricia de Melo Moreira/AFP Photo) 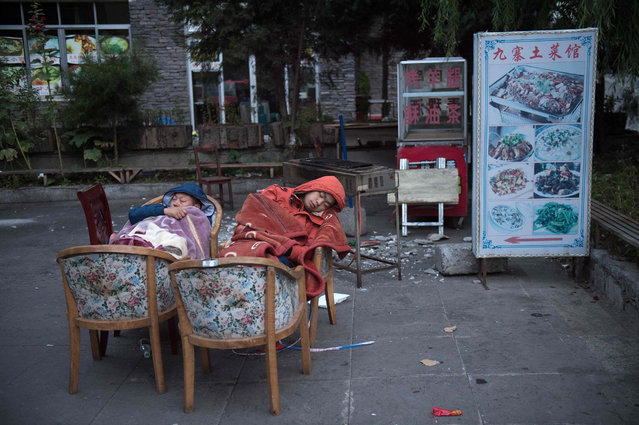 Residents fearing aftershocks sleep outside of their homes after an earthquake in Zhangzha in southwest China's Sichuan province on August 10, 2017. The 6.5-magnitude earthquake struck Sichuan province late on August 8, tearing cracks in mountain highways, triggering landslides, damaging buildings and sending panicked residents and tourists fleeing into the open. (Photo by Nicolas Asfouri/AFP Photo) 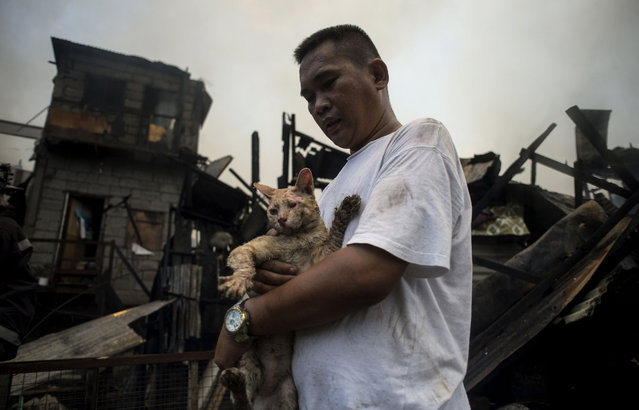 A man rescues his cat after a fire engulfed an informal settlers area beside a river in Manila on August 11, 2017. Fires are common hazards in the sprawling capital, where millions live in hovels made of scrap wood and cardboard and fire safety regulations are rarely imposed. (Photo by Noel Celis/AFP Photo) 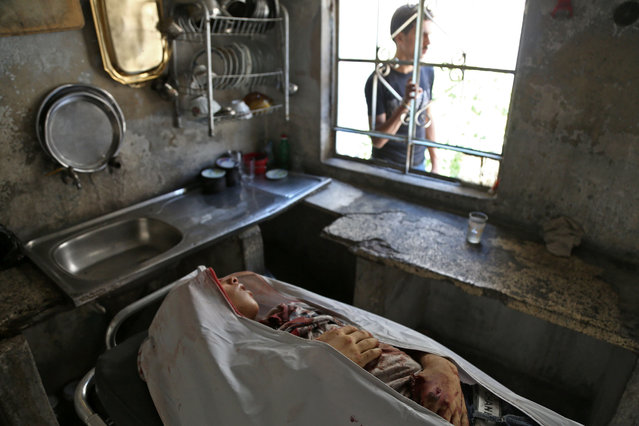 A picture taken on August 10, 2017 shows the body of a Syrian child who was reportedly killed during regime shellings in the rebel-controlled town of Hamouria, in the eastern Ghouta region on the outskirts of the capital Damascus, lying in his home kitchen prior to being prepared for funeral and burial. (Photo by Abdulmonam Eassa/AFP Photo) 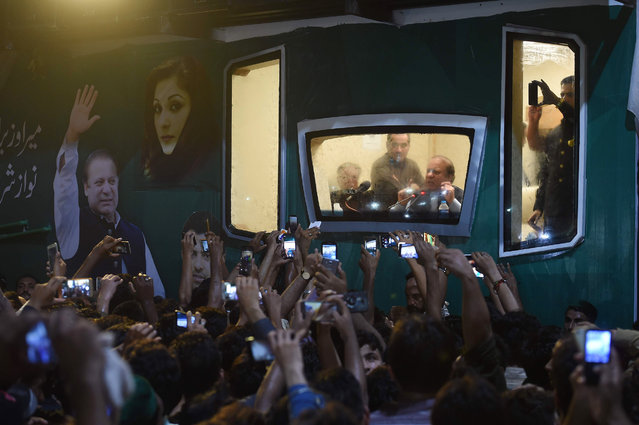 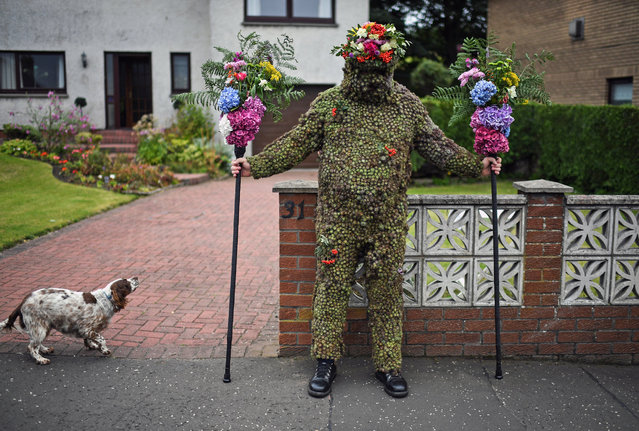 Burryman Andrew Taylor meets resident as he parades through the town encased in burrs on August 11, 2017 in South Queensferry, Scotland. The parade takes place on the second Friday of August each year and although the exact meaning of this tradition has been lost through the years though it is thought to have begun in the Seventeenth century. The tradition is believed to bring good luck to the towns people if they give him whisky offered through a straw or a donation of money. (Photo by Jeff J Mitchell/Getty Images) 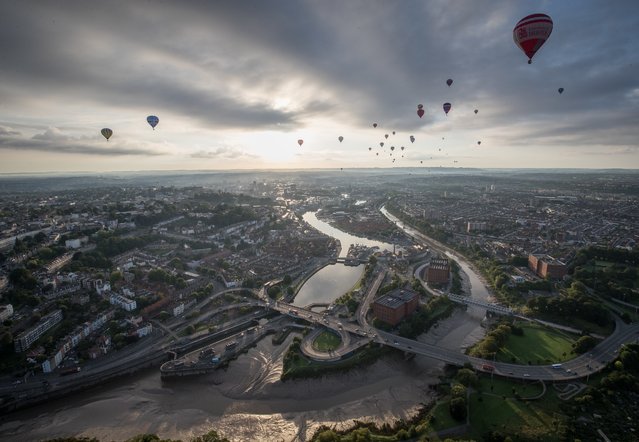 Hot air balloons take to the skies as they participate in the mass assent at sunrise on the second day of the Bristol International Balloon Fiesta on August 11, 2017 in Bristol, England. More than 130 balloons have gathered for the four day event, now in its 39th year and now one of Europe's largest annual hot air balloon events, being hosted in the city that is seen by many as the home of modern ballooning. (Photo by Matt Cardy/Getty Images)
Edit Del
14 Aug 2017 07:02:00, post received 0 comments
Publication archive:
←   →
Popular tags:
All tags
Last searches: