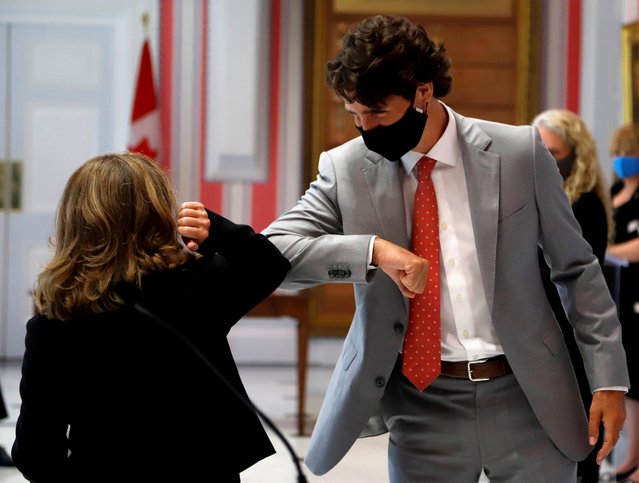 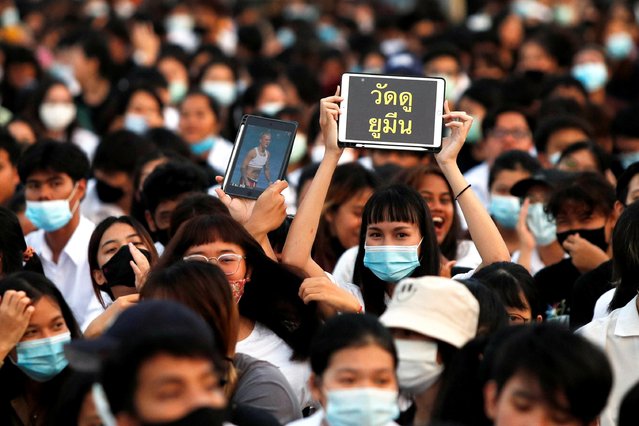 Students hold tablets during a rally in support for the student-led democracy movement at King Mongkut's Institute of Technology, in the outskirts of Bangkok, Thailand, August 19, 2020. The salute has been a symbol of calls for democracy since Prime Minister Prayuth Chan-ocha first took power in a 2014 coup. (Photo by Jorge Silva/Reuters) 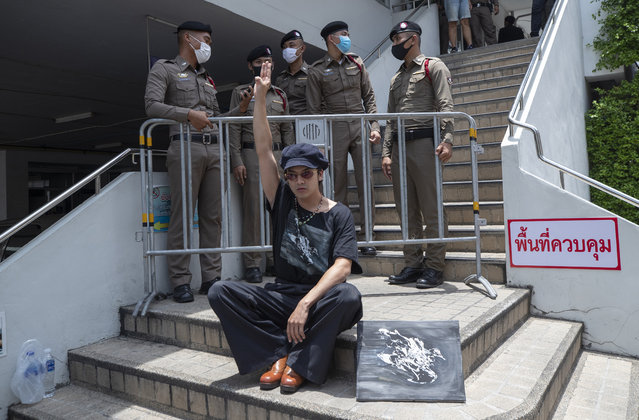 A pro-democracy supporter raises a three-finger salute, a symbol of resistance, in front of police officers at the Samranrat police station in Bangkok, Thailand, Thursday, August 20, 2020. Thai police arrested a rapper and four pro-democracy activists in a crackdown on growing protests that have emerged as the most serious threat to the government led by a former army general they accuse of incompetence and corruption. (Photo by Sakchai Lalit/AP Photo) 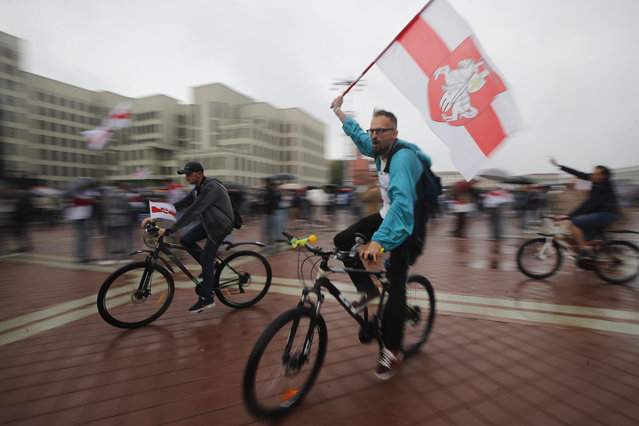 Belarusian opposition supporters ride bicycles and wave an old Belarusian national flags during a protest rally in front of the government building at Independent Square in Minsk, Belarus, Wednesday, August 19, 2020. The authoritarian leader of Belarus complained that encouragement from abroad has fueled daily protests demanding his resignation as European Union leaders held an emergency summit Wednesday on the country's contested presidential election and fierce crackdown on demonstrators. (Photo by Dmitri Lovetsky/AP Photo) 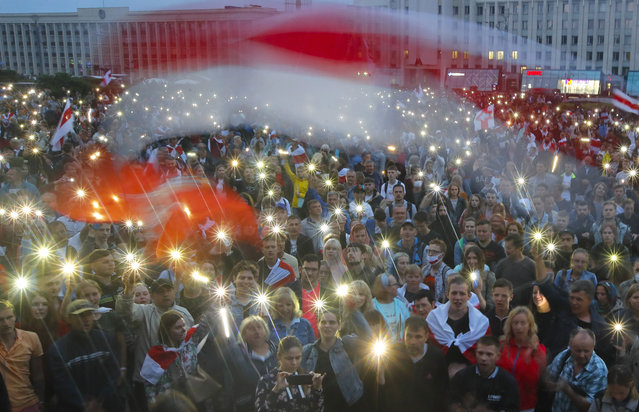 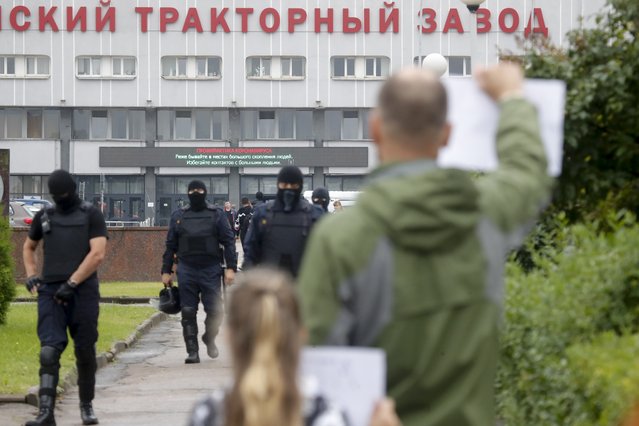 Protesters stand in front of the Minsk Tractor Works Plant holding posters supporting workers as police walk to push them back in Minsk, Belarus, Wednesday, August 19, 2020. Workers at state-controlled companies have joined strikes this week, as the unprecedented mass protests enter their 11th day and erode the authority of the man once dubbed “Europe's last dictator”. (Photo by Dmitri Lovetsky/AP Photo) 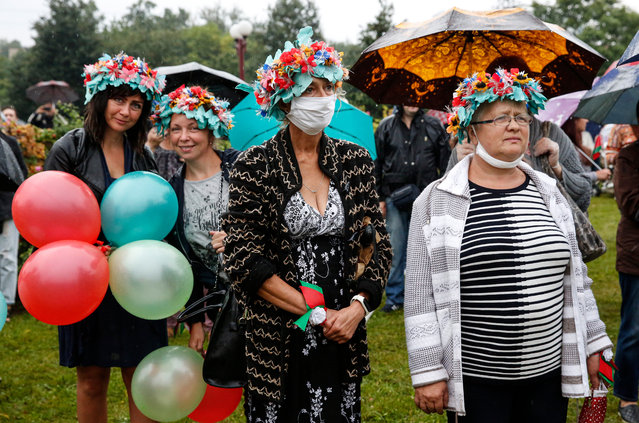 Supporters of Belarusian President-elect Alexander Lukashenko attend a rally in downtown of Minsk, Belarus, 19 August 2020. Long-time president Lukashenko, in a defiant speech on 16 August, rejected calls to step down amid mounting pressure after unrest erupted in the country over alleged poll-rigging and police violence at protests following election results claiming that he had won a landslide victory in the 09 August elections. Alexander Lukashenko has ordered the Belarusian State Security Committee (KGB) to identify organizers of protests. (Photo by Tatyana Zenkovich/EPA/EFE) 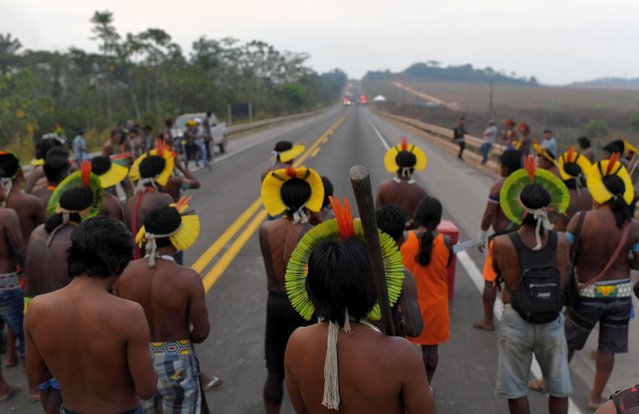 Kayapo indigenous people block Brazil's BR 163 national highway, as they protest against the government measures in the indigenous lands to avoid the spread of the coronavirus disease (COVID-19), in Novo Progresso, Para state, Brazil August 18, 2020. (Photo by Lucas Landau/Reuters) 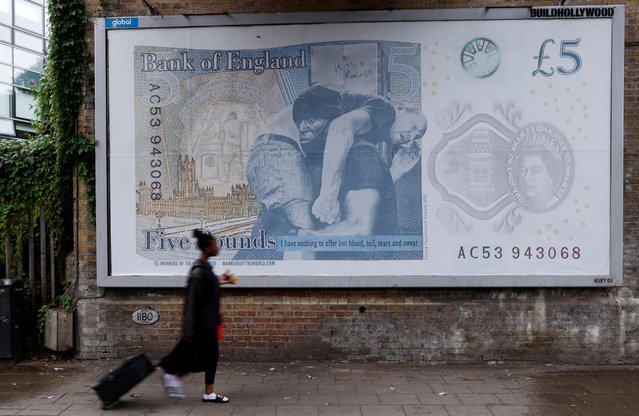 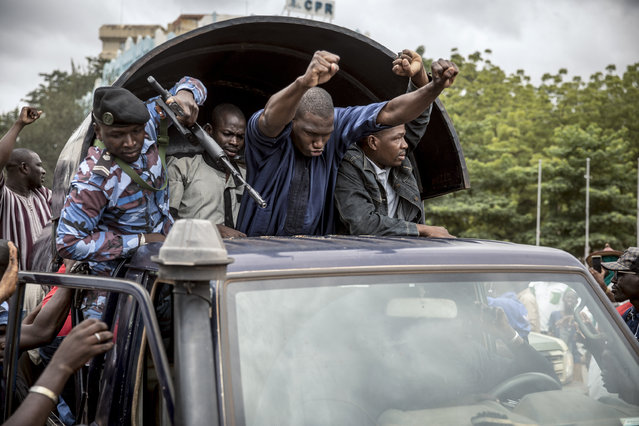 Security forces and others in celebration drive through the streets of the capital Bamako, Mali, Wednesday, August 19, 2020, a day after armed soldiers fired into the air outside President Ibrahim Boubacar Keita's home and took him into their custody. African and Western leaders condemned on Wednesday the junta that forced Mali's president from power, warning the coup was a deep setback for the West African nation that could threaten the battle against Islamic extremism. (Photo by AP Photo/Stringer) 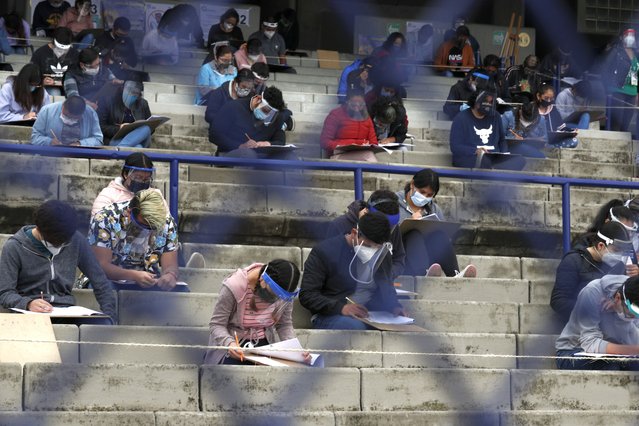 Prospective students are seen through a fence in the stands of University Olympic Stadium where they take the entrance exam for Mexico's National Autonomous University, amidst the ongoing coronavirus pandemic in Mexico City, Wednesday, August 19, 2020. More than 2,000 hopefuls registered to take the exam at the stadium, where it was being offered for the first time, and more than 80,000 aspirants were registered nationwide to take the exam. (Photo by Rebecca Blackwell/AP Photo) 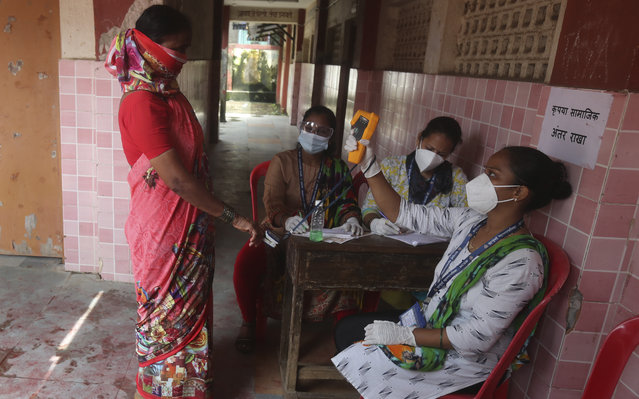 Community health workers screen people for COVID-19 and malaria symptoms in a school in Dharavi, one of Asia's biggest slums, in Mumbai, India, Wednesday, August 19, 2020. India has the third-highest coronavirus caseload in the world after the United States and Brazil. (Photo by Rafiq Maqbool/AP Photo) 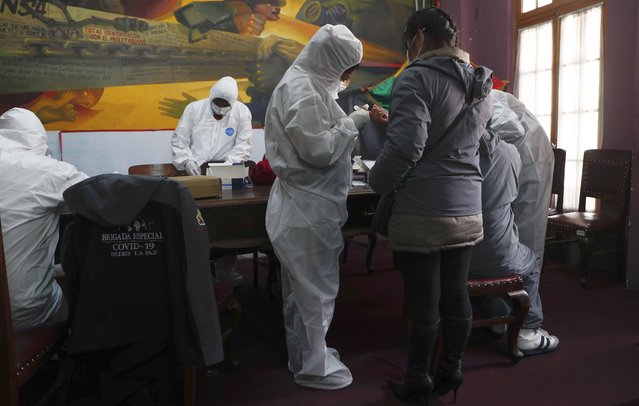 Healthcare workers dressed in full protective gear test journalists for the new coronavirus at a trade union office for media workers, in La Paz, Bolivia, Wednesday, August 19, 2020. Journalists asked the government to provide free rapid tests because many are worried after learning that several of their colleagues have been infected with COVID-19. (Photo by Juan Karita/AP Photo) 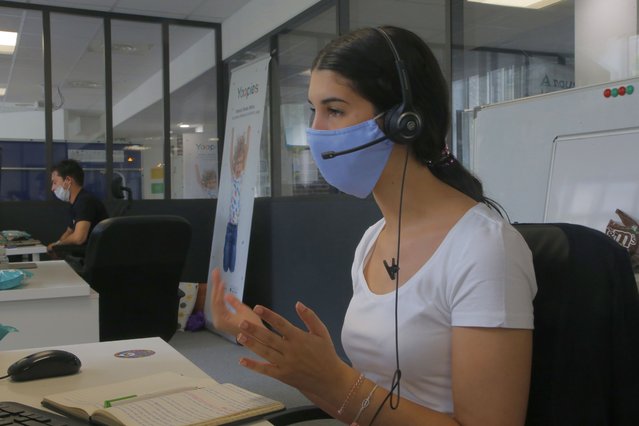 An employee wears a mask as she answers a call at a startup company, Wednesday August 19, 2020 in Paris. France is now mandating masks in all workplaces, from the Paris business district to factories in the provinces. The government is trying to contain growing virus infections but avoid shutting down the economy. The announcement makes France one of relatively few countries that's universally requiring workers to wear masks on the job, though they're routinely worn in many Asian countries. (Photo by Michel Euler/AP Photo) 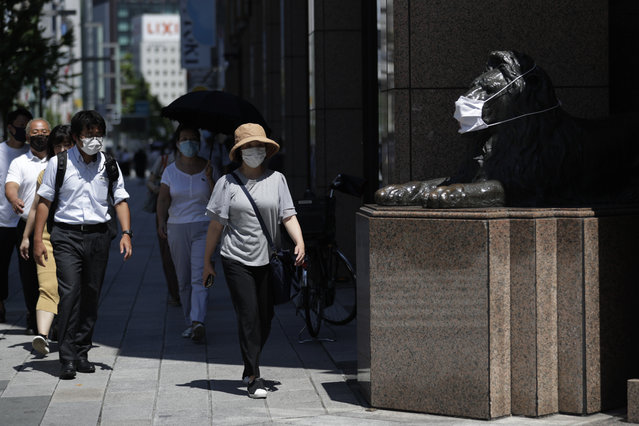 People wearing face masks to protect against the coronavirus walk by a statue of a lion decorated with a mask at a department store in Tokyo Thursday, August 20, 2020. (Photo by Hiro Komae/AP Photo) 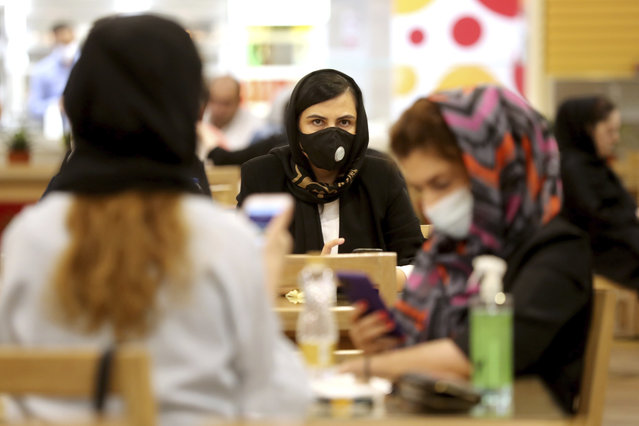 Women wearing protective face masks to help prevent spread of the coronavirus sit at a shopping center food court, in Tehran, Iran, Wednesday, August 19, 2020. Iran surpassed 20,000 confirmed deaths from the coronavirus on Wednesday, the health ministry said — the highest death toll for any Middle East country so far in the pandemic. (Photo by Ebrahim Noroozi/AP Photo) 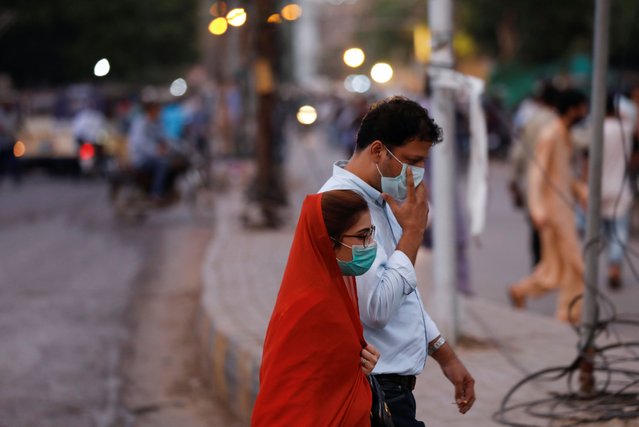 A man and woman wear protective masks while walking along a street after Pakistan lifted lockdown restrictions, as the coronavirus disease (COVID-19) outbreak continues, in Karachi, Pakistan on August 18, 2020. (Photo by Akhtar Soomro/Reuters) 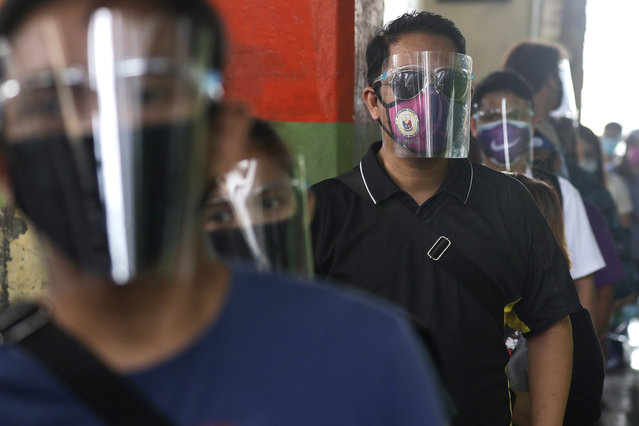 People wearing face mask and face shields to help curb the spread of COVID-19 line up for a bus ride in Caloocan city, Philippines on Wednesday, August 19, 2020. Philippine President Rodrigo Duterte has decided to ease a mild coronavirus lockdown in the capital and four outlying provinces to further reopen the country's battered economy despite having the most reported infections in Southeast Asia. (Photo by Aaron Favila/AP Photo) 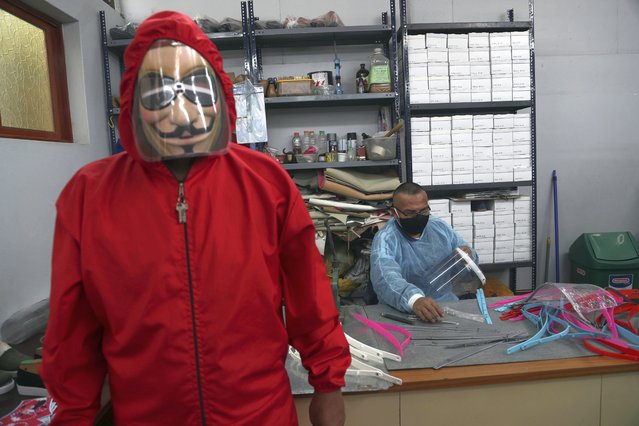 An inmate models the protective gear inmates manufacture as fellow inmate Luis Huaman makes face shields at a workshop in the Lurigancho prison, on the outskirts of Lima, Peru, Wednesday, August 19, 2020. Health authorities and inmates look to implement protocols to curb the spread of COVID-19 at the overcrowded prison. (Photo by Martin Mejia/AP Photo) 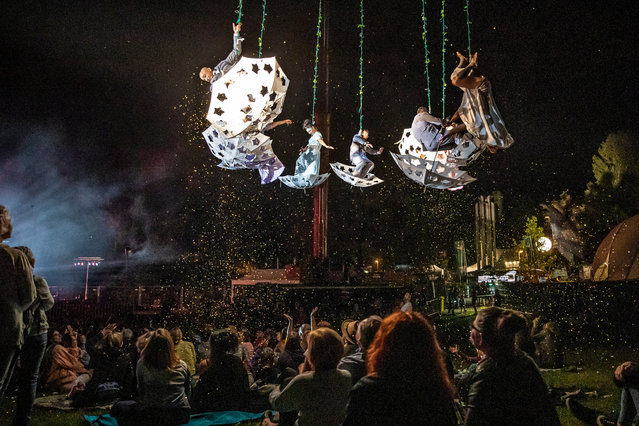 Members of the Spanish company Voala perform the show “Voala Station” at the official opening of the International Festival of New Circus and Theatre Letni Letna in Prague, Czech Republic, 18 August 2020. The Letni Letna Festival presents the best of domestic and foreign new circus, theater, music and visual arts, and runs from 18 to 25 August 2020. (Photo by Martin Divíšek/EPA/EFE) 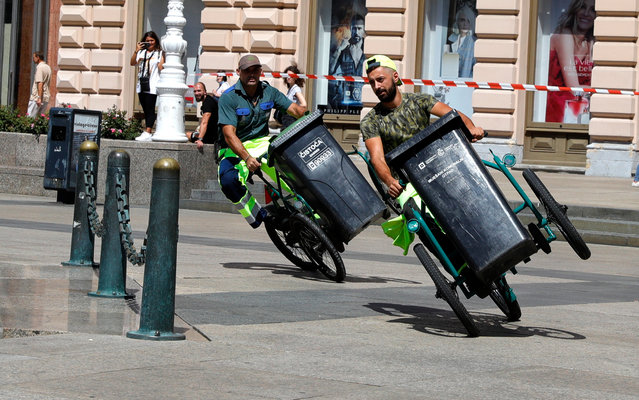