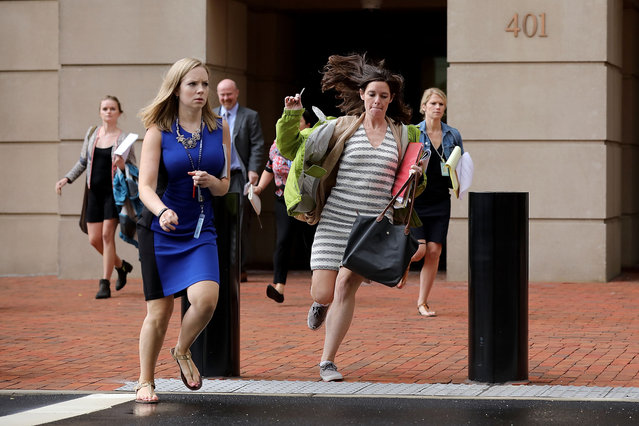 Journalists run out of the Albert V. Bryan U.S. Courthouse during the trial of former Trump campaign chairman Paul Manafort during the fourth day of jury deliberation August 21, 2018 in Alexandria, Virginia. Manafort has been charged with bank and tax fraud as part of special counsel Robert Mueller's investigation into Russian interference in the 2016 presidential election. (Photo by Chip Somodevilla/Getty Images) 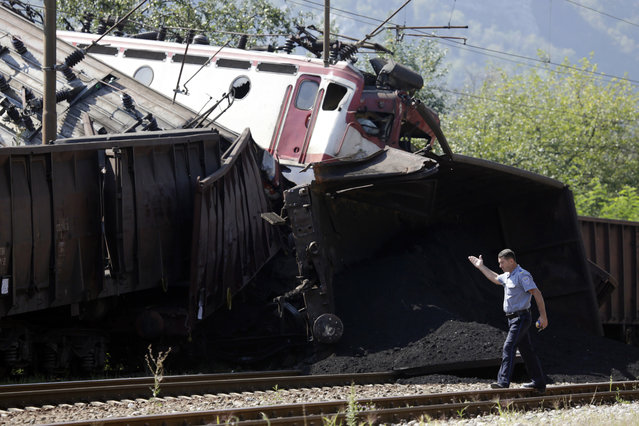 A police officer walks near the site where two cargo trains collided at the train station in Jablanica, about 80 kms south of Sarajevo, Bosnia, Thursday, August 23, 2018. Police say two people have been killed and one was seriously injured in a head-on freight train collision in southern Bosnia, early Thursday. (Photo by Amel Emric/AP Photo) 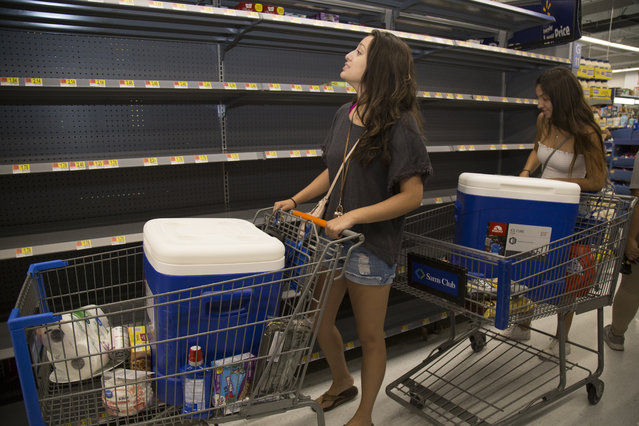 University of Hawaii at Manoa students, Madison Flores, 19, and Loreal Walls-Jaime, who bought coolers in hopes of saving the food in their refrigerator at home if the electricity goes out, look over the empty shelves of can goods at Walmart while in preparation for Hurricane Lane on Wednesday, August 22, 2018 in Honolulu, Hi. Lane is a high-end Category 4 hurricane and remains a threat to the entire island chain. (Photo by Kat Wade/Getty Images) 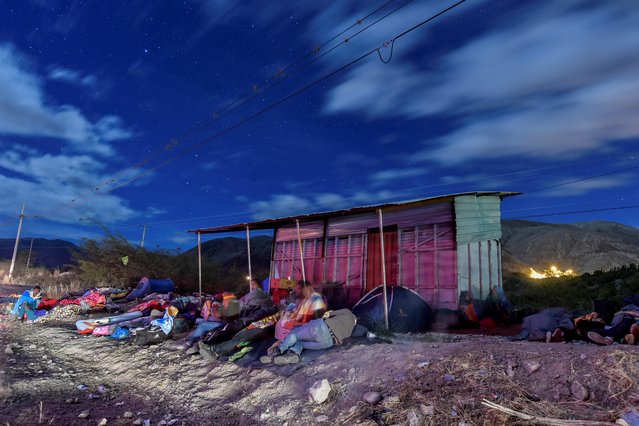 Venezuelan migrants on their way to Peru sleep along the Pan-American Highway between Tulcan and Ibarra in Ecuador, after entering the country from Colombia, on August 22, 2018. Ecuador announced on August 16 that Venezuelans entering the country would need to show passports from August 18 onwards, a document many are not carrying. And Peru followed suit on August 17, announcing an identical measure due to begin on August 25. (Photo by Luis Robayo/AFP Photo) 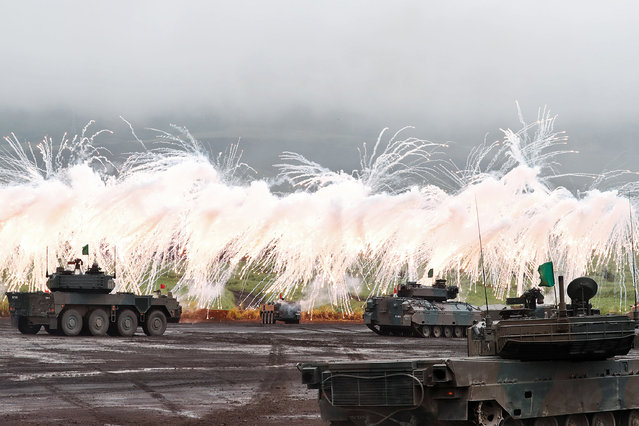 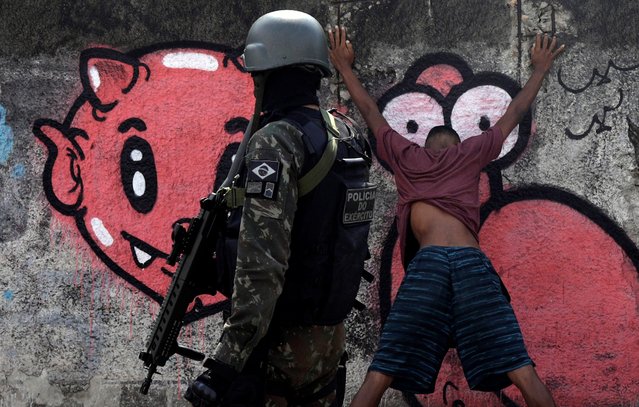 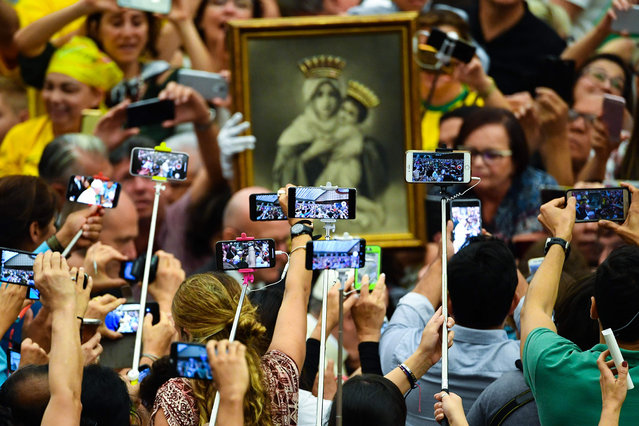 The faithful, holding selfie sticks and mobile phones, wait for the Pope to arrive for his weekly general audience in Paul VI hall on August 22, 2018 at The Vatican. (Photo by Vincenzo Pinto/AFP Photo) 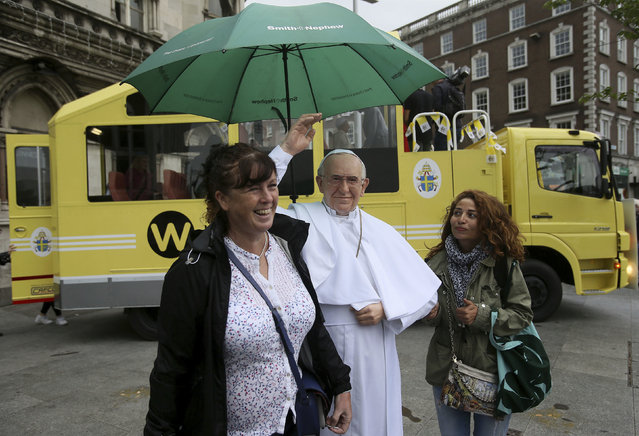 Tourists pose for photos with a newly unveiled wax work of Pope Francis ahead of Pope Francis' visit to Ireland, in Dublin, Thursday August 23, 2018. (Photo by Brian Lawless/PA Wire via AP Photo) 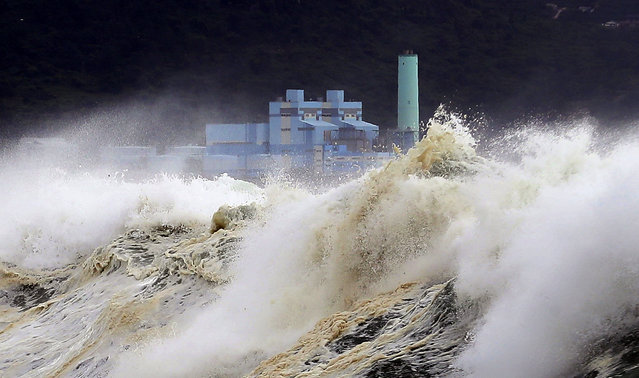 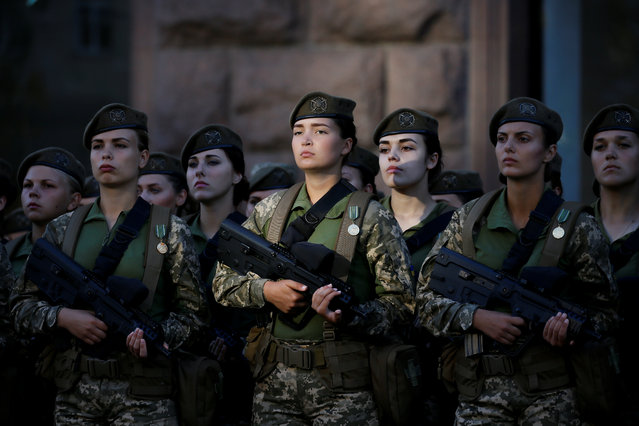 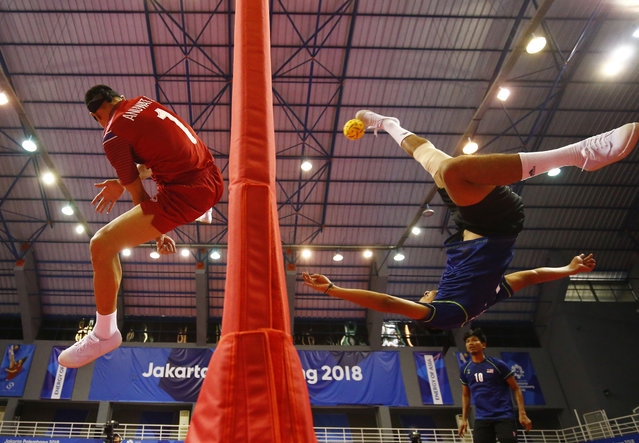 Anuwat Chaichana of Thailand and Muhamad Norhaffizi Abd Razak of Malaysia in action during the Men's Team Regu Gold Medal Match during the 2018 Asian Games in Jakarta on August 22, 2018. (Photo by Edgar Su/Reuters) 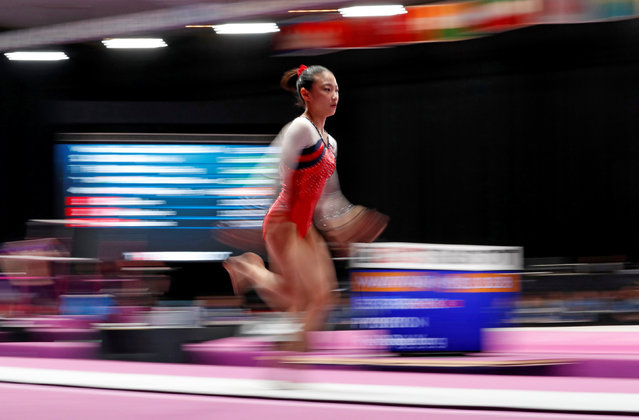 Miju Ham of Korea competes in the women's Floor Exercise of the Artistic Gymnastics at the Jiexpo Hall on day four of the Asian Games on August 22, 2018 in Jakarta, Indonesia. (Photo by Cathal Mcnaughton/Reuters) 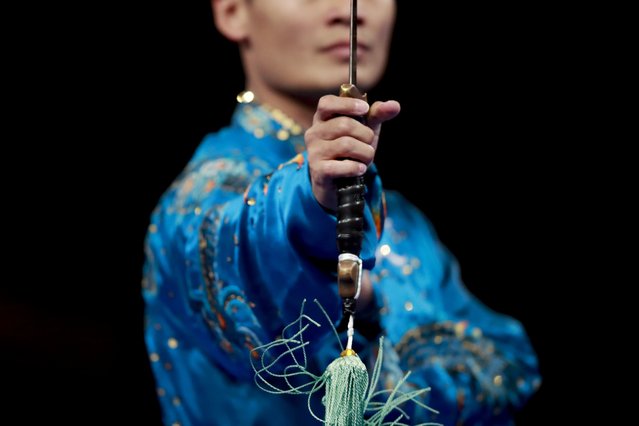 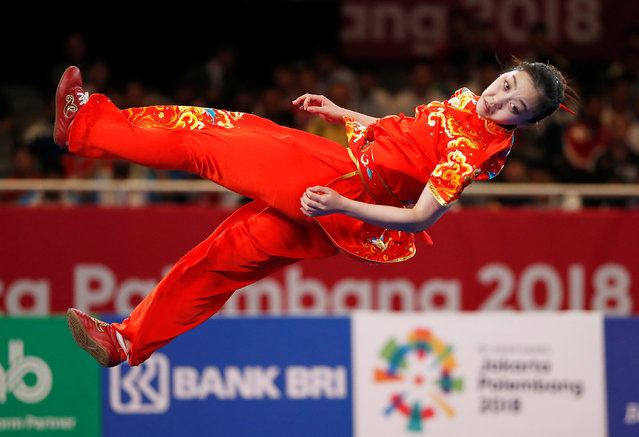 Qi Xinyi of China competes in the changquan event at the women' s wushu competition during the 2018 Asian Games in Jakarta on August 22, 2018. (Photo by Issei Kato/Reuters) 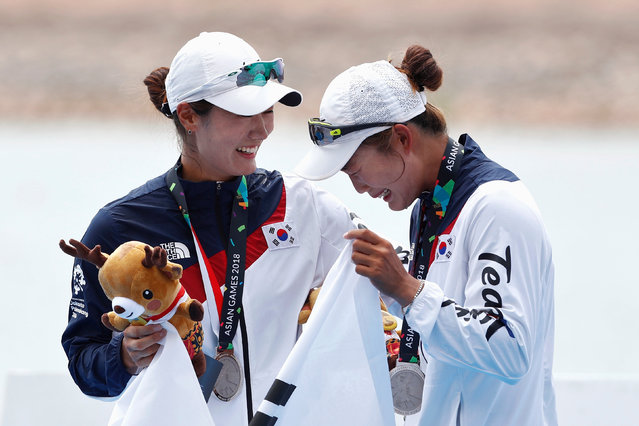 Silver medallists Kim Seul-gi and Kim Ye-ji of South Korea react during the victory ceremony for the women’s double sculls rowing final during the 2018 Asian Games in Palembang on August 23, 2018. (Photo by Edgar Su/Reuters) 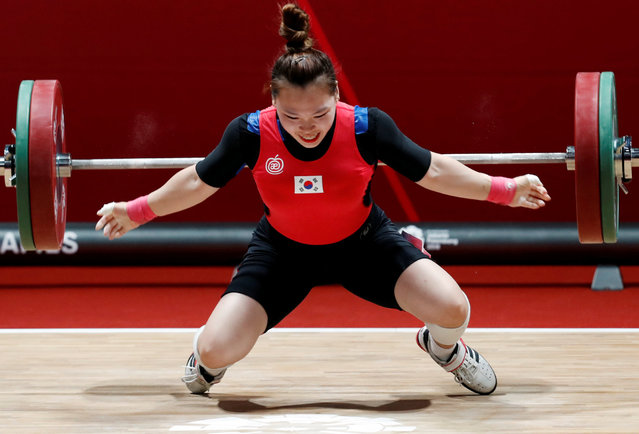 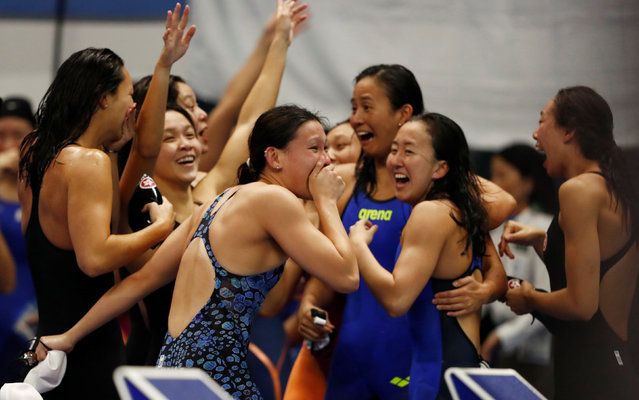 Swimmers from Hong Kong (black) and Singapore (blue) celebrate after the final of the women’s 4x100 m medley relay swimming event during the 2018 Asian Games in Jakarta on August 23, 2018. (Photo by Jeremy Lee/Reuters) 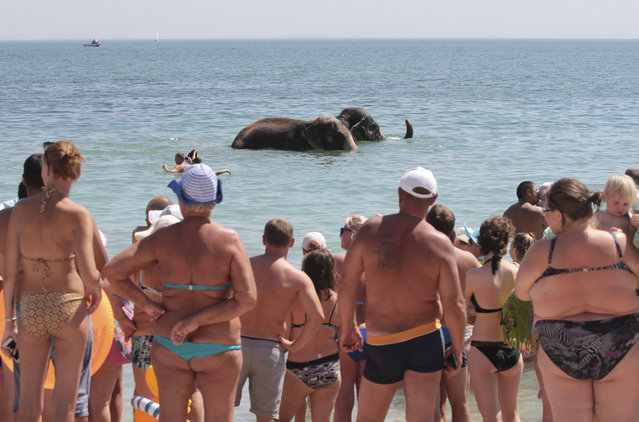 People watch elephants from a local circus taking a regular bath in the waters of the Black Sea on a hot summer day in Yevpatoria, Crimea on August 21, 2018. (Photo by Pavel Rebrov/Reuters) 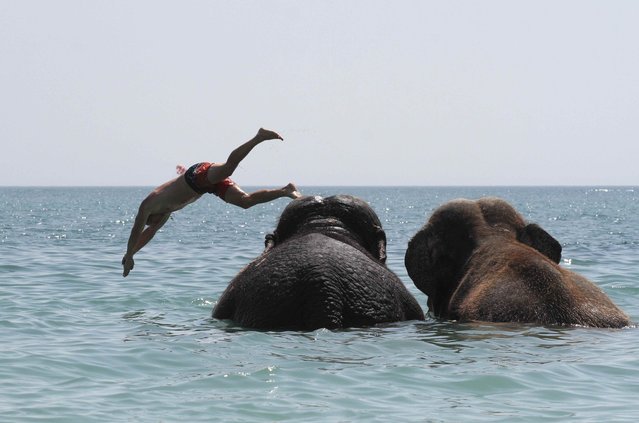 A trainer dives as elephants from a local circus take a regular bath in the waters of the Black Sea on a hot summer day in Yevpatoria, Crimea on August 21, 2018. (Photo by Pavel Rebrov/Reuters) 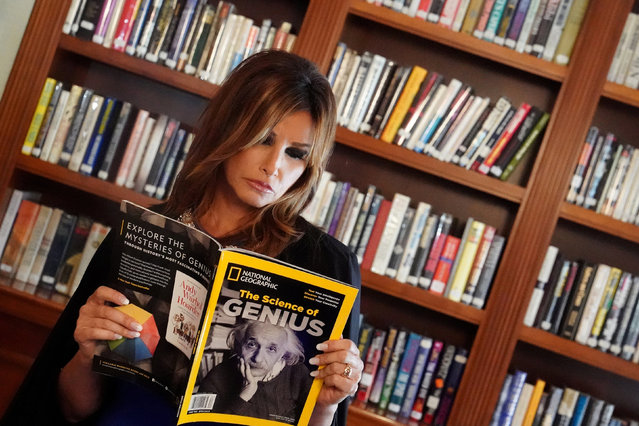 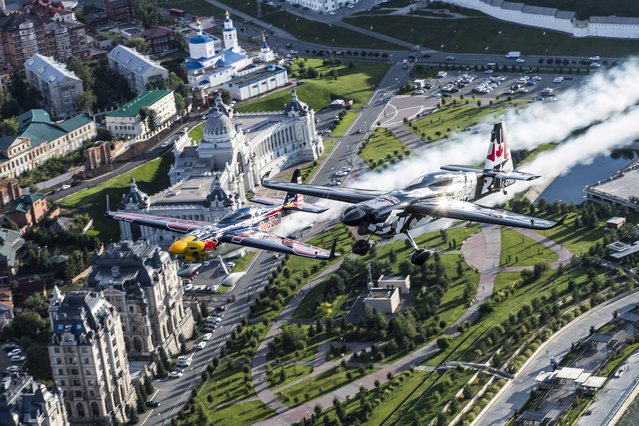 A handout photo made available by Limex Images of Pete McLeod of Canada (R) and Kirby Chambliss of the United States flying over the city of Kazan prior to the fifth stage of the Red Bull Air Race World Championship in Russia on August 22, 2018. (Photo by Joerg Mitter/EPA/EFE/Limex Images)
Edit Del
24 Aug 2018 05:42:00, post received 0 comments
Publication archive:
←   →
Popular tags:
All tags
Last searches: