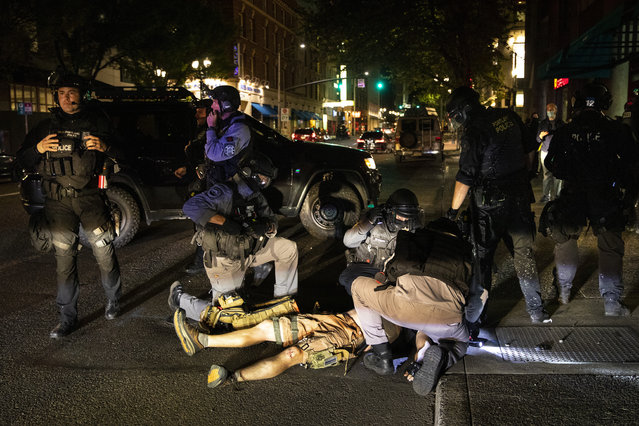 A man is being treated after being shot Saturday, August 29, 2020, in Portland, Ore. Fights broke out in downtown Portland Saturday night as a large caravan of supporters of President Donald Trump drove through the city, clashing with counter-protesters. (Photo by Paula Bronstein/AP Photo) 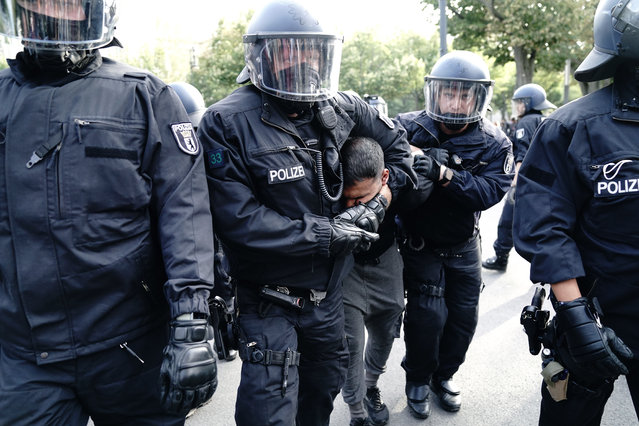 The police take vegan chef Attila Hildmann into custody during a demonstration against COVID-19 measures, in Berlin, Germany, Saturday, August 29, 2020. Berlin police ordered a protest by people opposed to Germany’s pandemic restrictions to disband after participants refused to observe social distancing rules. Tens of thousands of people had gathered at the  Brandenburg Gate before marching through the German capital in a show of defiance Saturday against Germany's coronavirus prevention measures. (Photo by Kay Nietfeld/dpa via AP Photo) 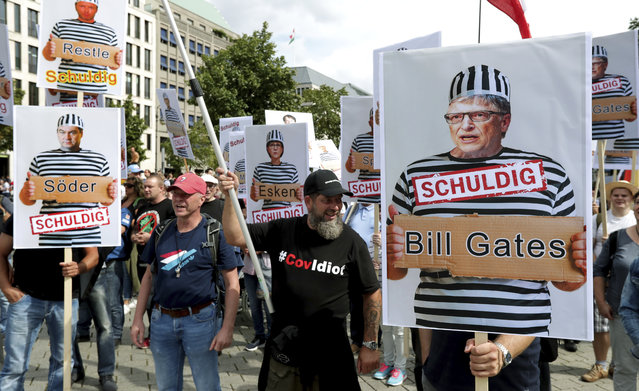 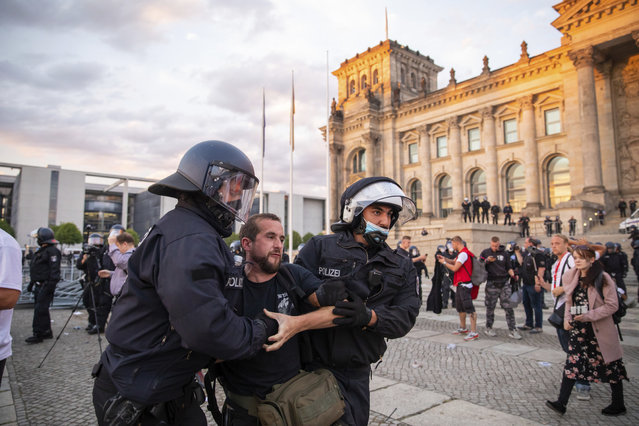 Police officers push away a crowd of demonstrators from the square “Platz der Republik” in front of the Reichstag building during a demonstration against the Corona measures in Berlin, Germany, Saturday, August 29, 2020. (Photo by Christoph Soeder/dpa via AP Photo) 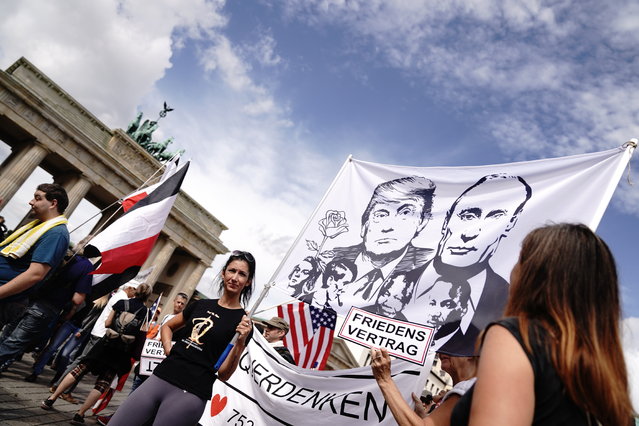 Participants gather at the Brandenburg Gate for a demonstration against the Corona measures and hold a banner with the picture of US President Trump and Russian President Putin in Berlin, Germany, Saturday, August 29, 2020. (Photo by Kay Nietfeld/dpa via AP Photo) 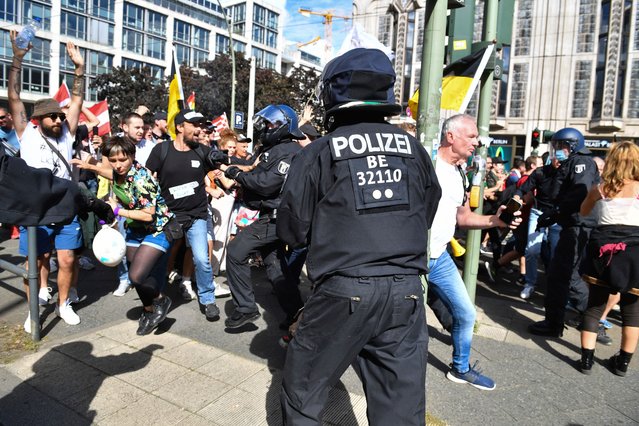 Participants of a demonstration against the Corona measures break through a police chain at the corner of Friedrichstraße/Reinhardtstraße in Berlin, Germany on August 29, 2020. (Photo by Bernd Von Jutrczenka/dpa) 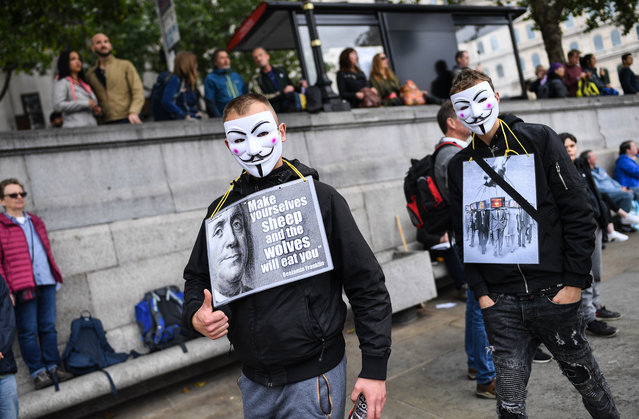 Two men wearing masks are seen at the Unite for Freedom protest in Trafalgar Sq on August 29, 2020 in London, England. Speakers, including Jeremy Corbyn's brother Piers Corbyn, spoke to hundreds of people gathered in Trafalgar square during an anti-mask demo. (Photo by Peter Summers/Getty Images) 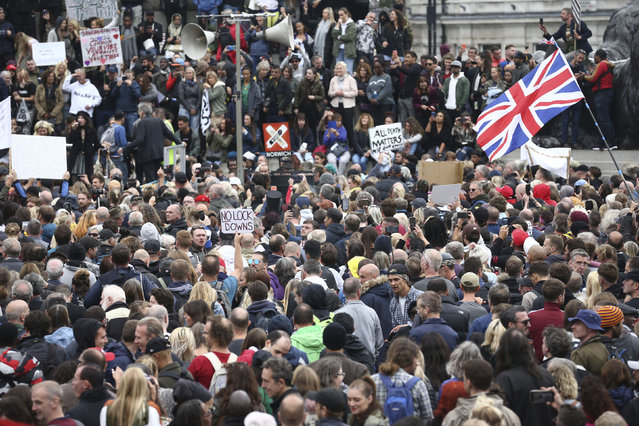 Protesters gather opposed to COVID-19 pandemic restrictions, in Trafalgar Square, London, Saturday, August 29, 2020. This protest shows solidarity with a protest held in Germany where tens of thousands of people gathered at the German capital's iconic Brandenburg Gate in the morning before streaming down the Unter den Linden boulevard in a show of defiance against Germany's coronavirus prevention measures. (Photo by Yui Mok/PA Wire via AP Photo) 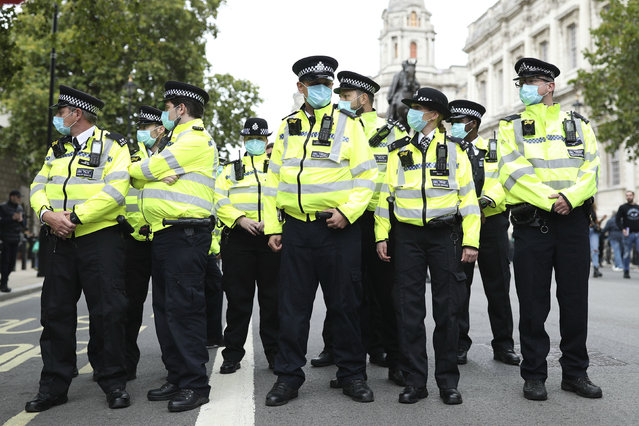 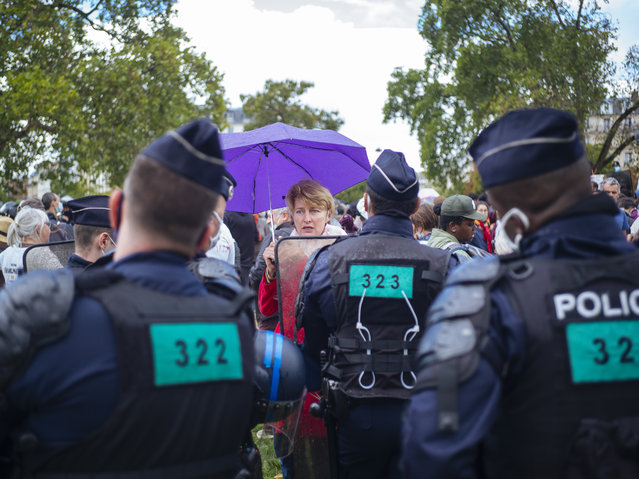 A woman without a mask, speaks with a French riot officer during an anti-mask demonstration in Paris, Saturday, August 29, 2020. A few hundred people rallied Saturday at the Place de la Nation in eastern Paris to protest new mask rules and other restrictions prompted by rising virus infections around France. (Photo by Kamil Zihnioglu/AP Photo) 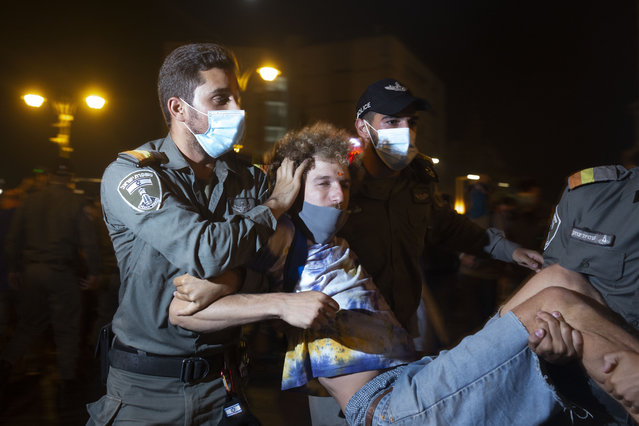 Police carry away a protester as they clear the square outside of Israeli Prime Minister Benjamin Netanyahu's residence in Jerusalem, early Sunday, August 30, 2020. Thousands of Israelis demonstrated in Jerusalem in a continuation of summer-long weekend rallies demanding the resignation of Netanyahu, who faces a corruption trial and accusations of mishandling the coronavirus crisis. (Photo by Maya Alleruzzo/AP Photo) 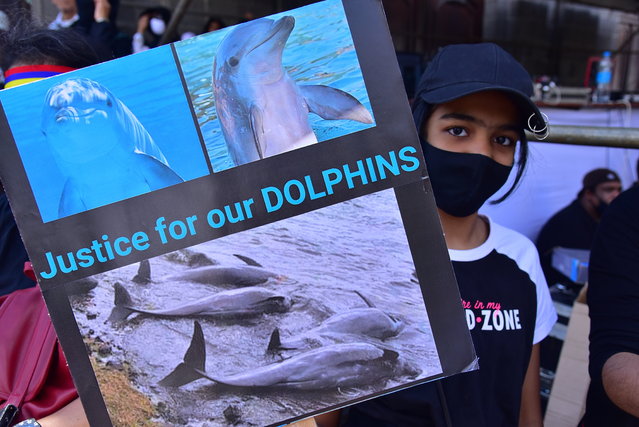 Tens of thousands of people protest in Port Louis, Mauritius, Saturday August 29, 2020, over the government's slow response to an oil spill from a grounded Japanese ship and the alarming discovery of dozens of dead dolphins. (Photo by Beekash Roopun/L'express Maurice via AP Photo) 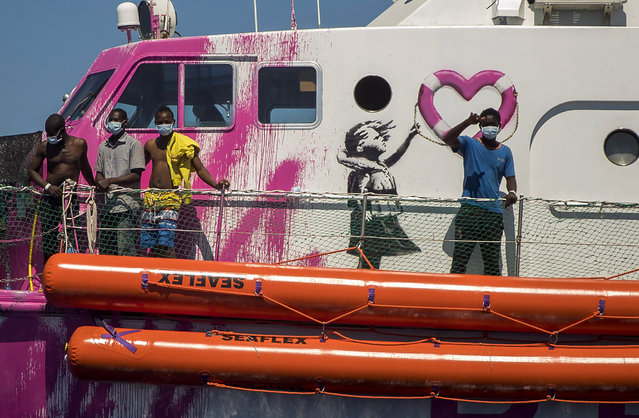 A boy waves to the crew of the Astral rescue vessel from the deck of the Louise Michel rescue vessel, a French patrol boat currently manned by activists and funded by the renowned artist Banksy in the Central Mediterranean sea, at 50 miles south from Lampedusa, Friday, August 28, 2020. A Berlin-based group says it has begun migrant rescue operations in the Mediterranean Sea with a bright pink former navy vessel sponsored by British artist Banksy. The group operating the MV Louise Michel, a sleek 30-meter (98-foot) ship named after a 19th century French feminist and anarchist, said late Thursday that it rescued 89 from an inflatable boat in distress. (Photo by Santi Palacios/AP Photo) 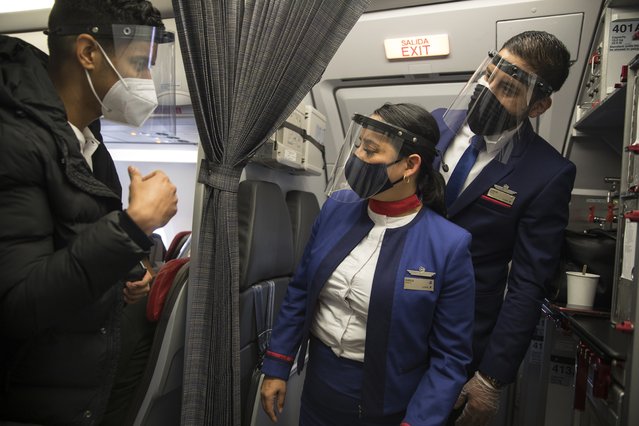 Flight attendants from the LAN company using protective gear due to the COVID-19, listen to a passenger minutes before a flight take off from Lima to Pucallpa, Peru, Saturday, August 29, 2020. (Photo by Rodrigo Abd/AP Photo) 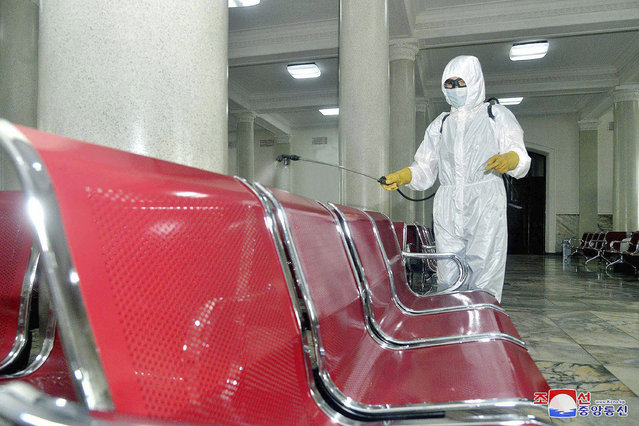 In this undated photo provided on Saturday, August 29, 2020, by the North Korean government, an employee disinfects the inside of Pyongyang Station to protect against the coronavirus in Pyongyang, North Korea. Independent journalists were not given access to cover the event depicted in this image distributed by the North Korean government. The content of this image is as provided and cannot be independently verified. Korean language watermark on image as provided by source reads: “KCNA” which is the abbreviation for Korean Central News Agency. (Photo by Korean Central News Agency/Korea News Service via AP Photo) 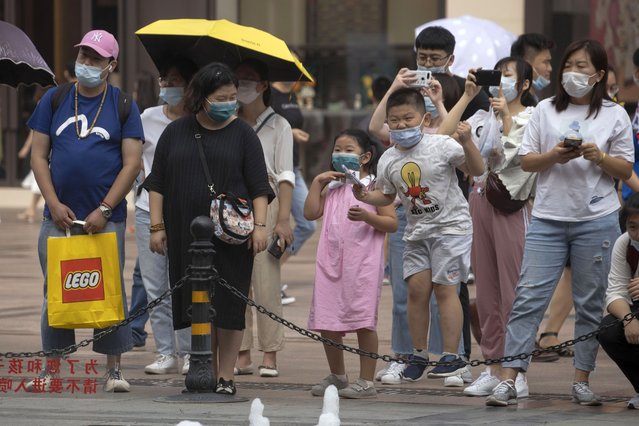 Residents wearing mask to protect from the coronavirus react as they watch a water fountain at a retail street in Beijing, China on Saturday, August 29, 2020. About one-third of students returned to school in the Chinese capital on Saturday in a staggered start to the new school year because of the coronavirus. (Photo by Ng Han Guan/AP Photo) 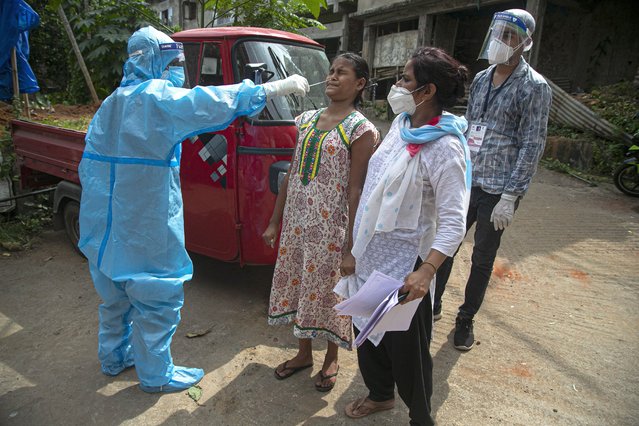 An Indian health worker takes a nasal swab sample to test for COVID-19 during a door to door test drive in Gauhati, India, Saturday, August 29, 2020. India has the third-highest coronavirus caseload after the United States and Brazil, and the fourth-highest death toll in the world. (Photo by Anupam Nath/AP Photo) 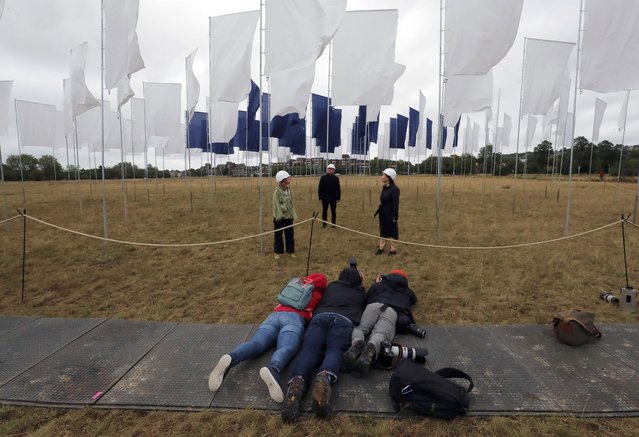 Photographers lie on the ground to take the best picture as Nurse Angela Helleur, right, is guided through Luke Jerram's In Memoriam art installation that was erected outside the Queen Elizabeth Hospital on Woolwich Common in London, Saturday, August 29, 2020. It has been created as a memorial to those lost in the Covid-19 pandemic as well a tribute to the NHS and care-workers. Created from bed sheets, In Memoriam is intended to be an evocative symbol of local, national and international solidarity, presented as a space for reflection, remembrance, and recognition. (Photo by Frank Augstein/AP Photo) 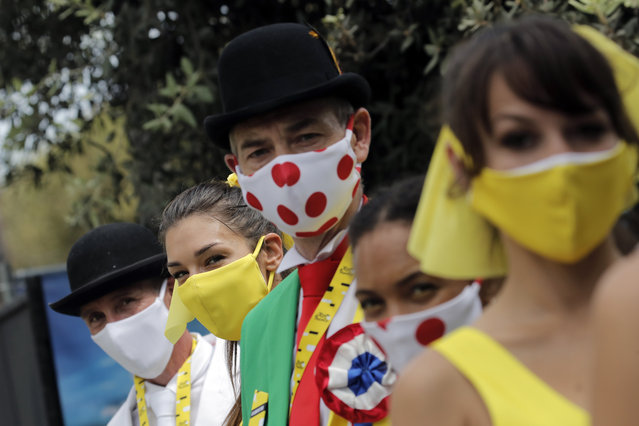