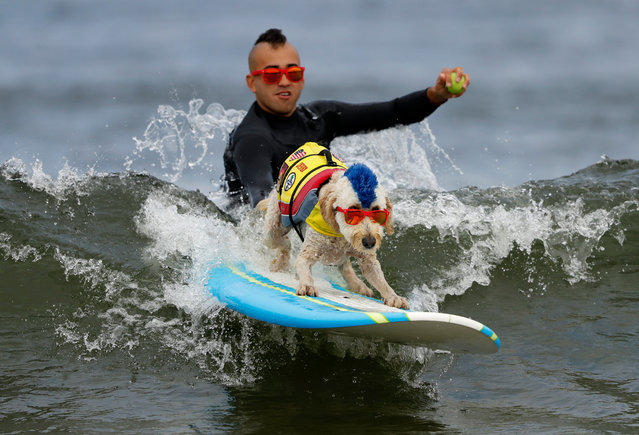 Derby the dog surfs while getting a push off by his owner Kentucky during the World Dog Surfing Championships at Linda Mar Beach in Pacifica, California, USA, 05 August 2017. Abbie holds the 2013 Guinness World Record for the Longest Wave Surfed by a dog. (Photo by John G. Mabanglo/EPA) 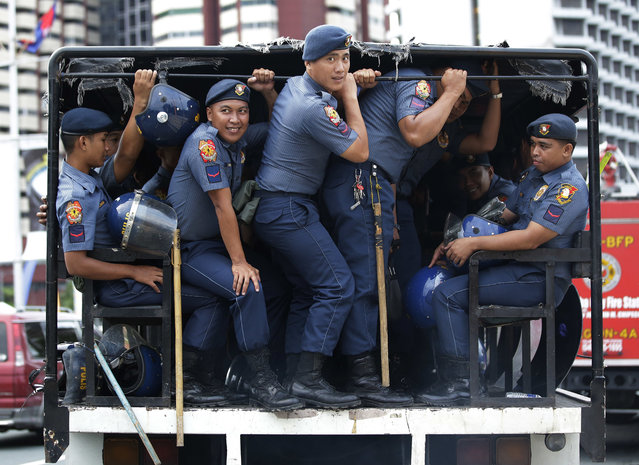 Police ride at the back of a truck near the venue of the 50th Association of Southeast Asian Nations Foreign Ministers' Meeting and its regional partners in Manila, Philippines on Thursday, August 3, 2017. Washington is seeking talks on how North Korea can be suspended from Asia's biggest security forum as part of a broader effort to isolate Pyongyang diplomatically and force it to end its missile tests and abandon its nuclear weapons program, U.S. and Philippine officials said. (Photo by Aaron Favila/AP Photo) 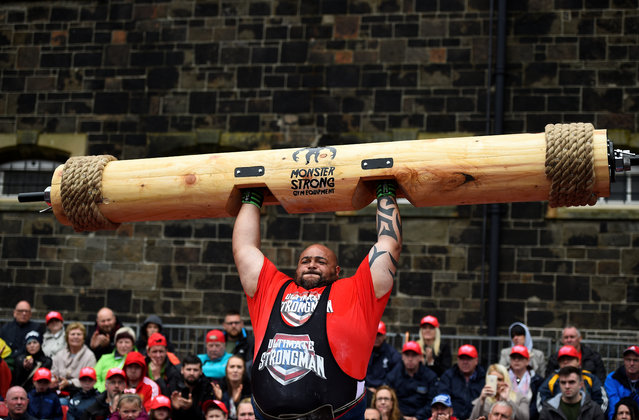 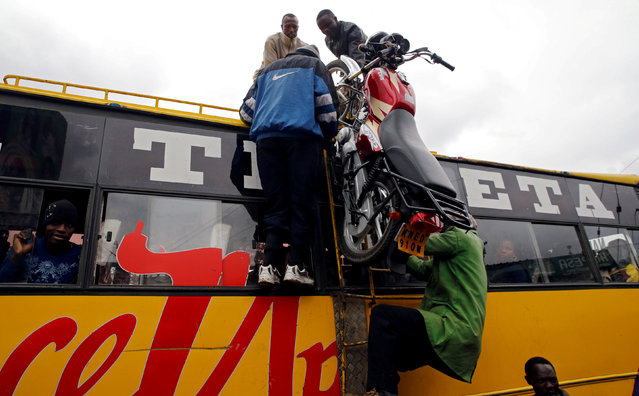 Loaders push a motorcycle atop a public bus for passengers traveling to the countryside ahead of next week's general election in Nairobi, Kenya on August 3, 2017. (Photo by Thomas Mukoya/Reuters) 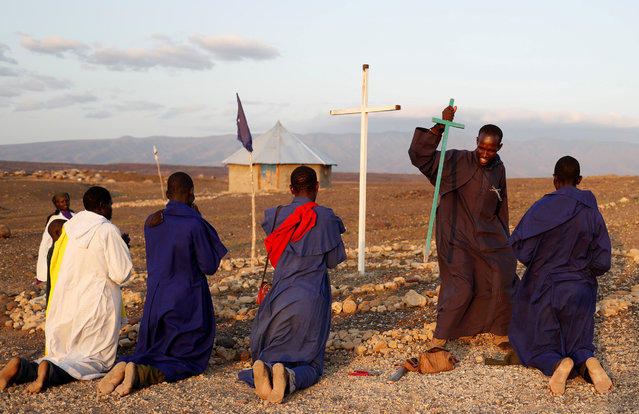 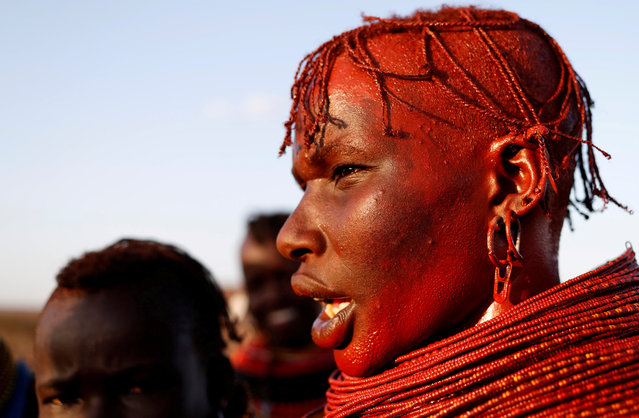 A Turkana tribeswoman stands in a village near Loiyangalani, Kenya August 4, 2017. (Photo by Goran Tomasevic/Reuters) 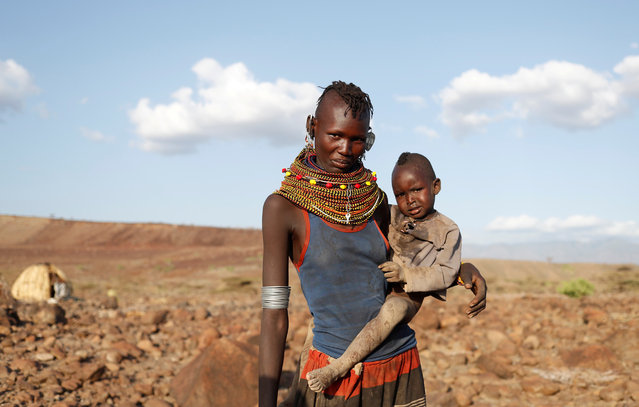 A Turkana tribeswoman holds her child in a village near Loiyangalani, Kenya August 4, 2017. (Photo by Goran Tomasevic/Reuters) 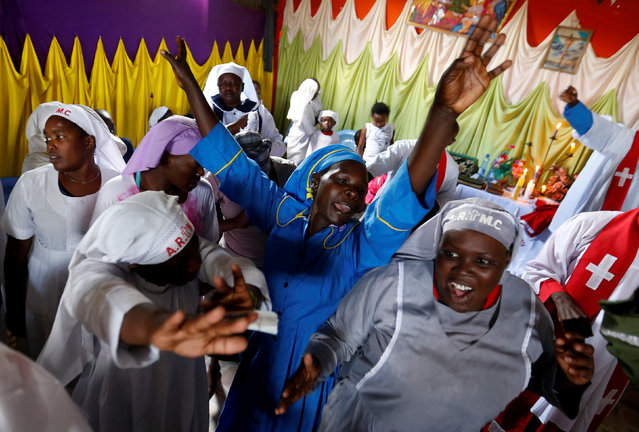 Faithful of the African Roho Musalaba Church sing hymns during a special service to pray for a peaceful presidential election in Kisumu Ndogo village in Kibera slums of Nairobi, Kenya, August 6, 2017. (Photo by Thomas Mukoya/Reuters) 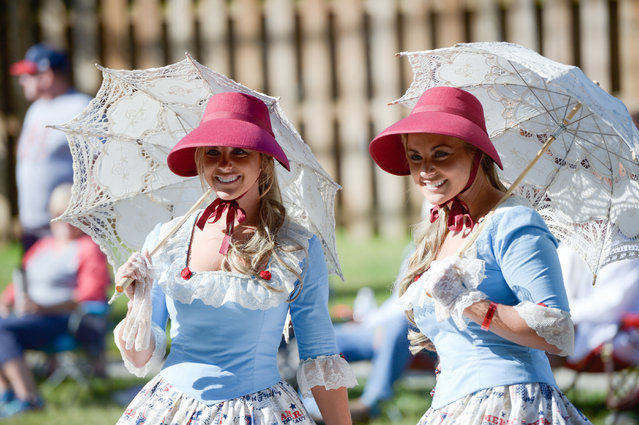 Twins travel down the parade route during the annual Twins Days Festival in Twinsburg, Ohio on August 5, 2017. (Photo by Dustin Franz/AFP Photo) 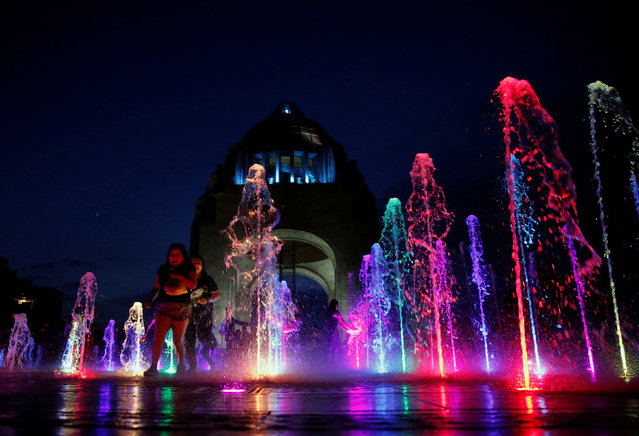 People are seen by an illuminated fountain at the Monument of the Revolution in Mexico City, Mexico on August 5, 2017. (Photo by Henry Romero/Reuters) 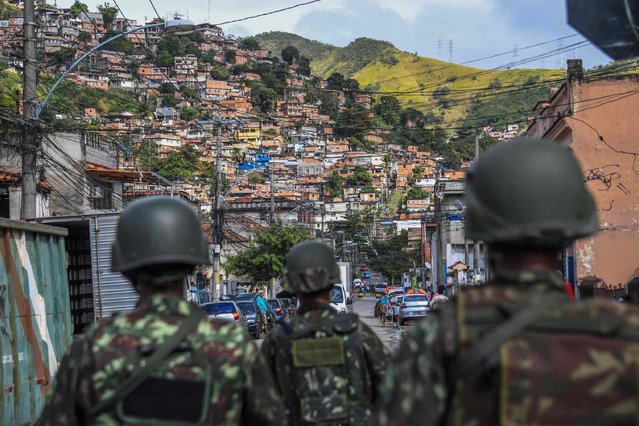 Soldiers take part in a crackdown on crime gangs, at the Lins de Vasconcelos slum complex in Rio de Janeiro, Brazil, on August 5, 2017. Thousands of Brazilian army troops raided Rio de Janeiro slums leaving parts of the city looking like a war zone. Their main goal was to stop gangs behind a surge in brazen robberies of commercial trucks, with arrest warrants issued for 40 people. However, the unusually aggressive pre-dawn operation also follows wider concerns that nearly bankrupt post-Olympic Rio is spinning out of control. (Photo by Apu Gomes/AFP Photo) 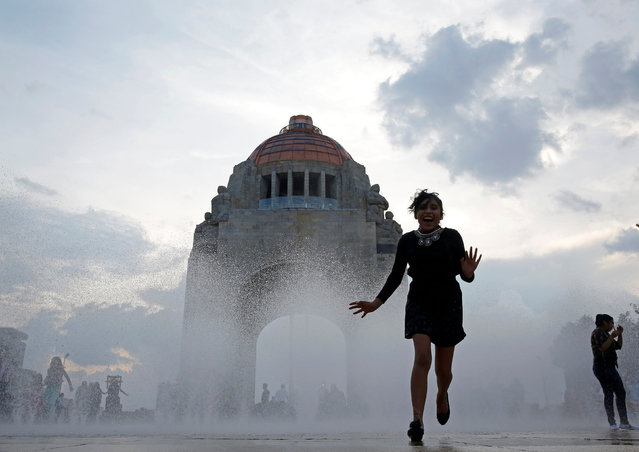 A woman runs through a fountain at the Monument of the Revolution in Mexico City, Mexico August 5, 2017. (Photo by Henry Romero/Reuters) 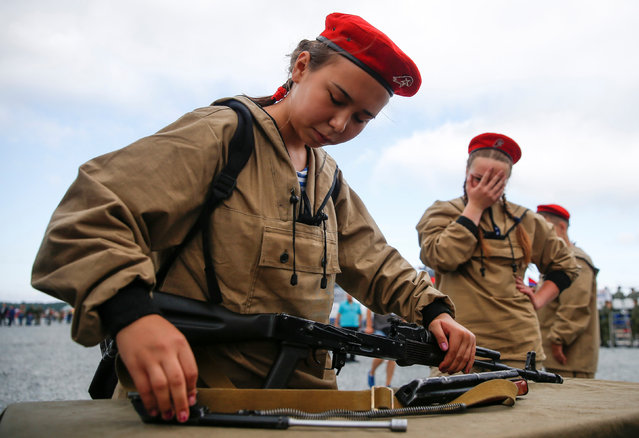 A girl assembles an AK-74 before the Safe Route competition at the International Army Games 2017 at the Andreyevsky military polygon outside Tyumen, Russia, August 6, 2017. (Photo by Maxim Shemetov/Reuters) 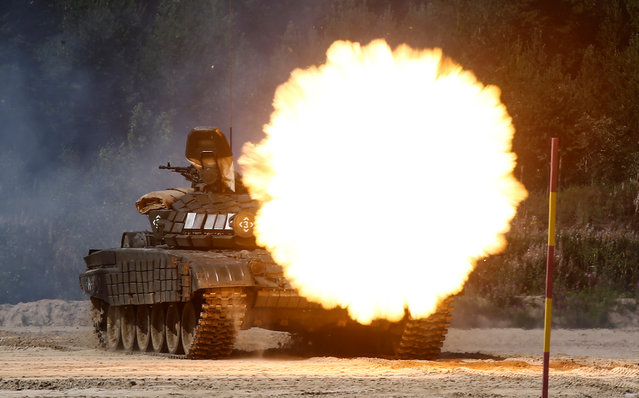 A T-72B1 tank fires during the Safe Route competition at the International Army Games 2017 at the Andreyevsky military polygon outside Tyumen, Russia, August 6, 2017. (Photo by Maxim Shemetov/Reuters) 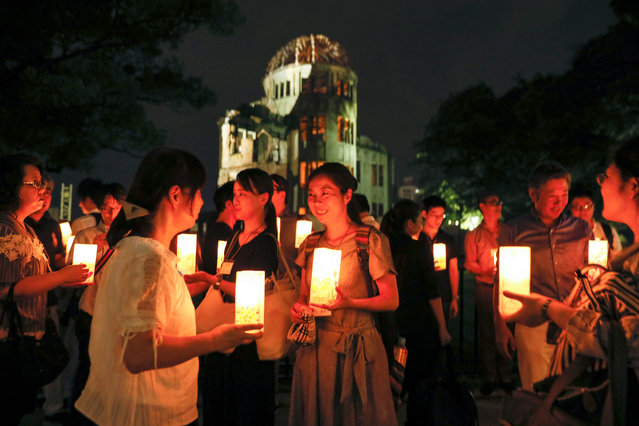 People holding candles gather for the Peace Candle vigil in front of the Atomic Bomb Dome (Rear) to comfort soul of victims of the 06 August 1945 atomic bombing at Hiroshima Peace Memorial Park in Hiroshima, western Japan, 05 August 2017. Hiroshima will mark 72nd anniversary of the atomic bombing on 06 August 2017. (Photo by Kimimasa Mayama/EPA) 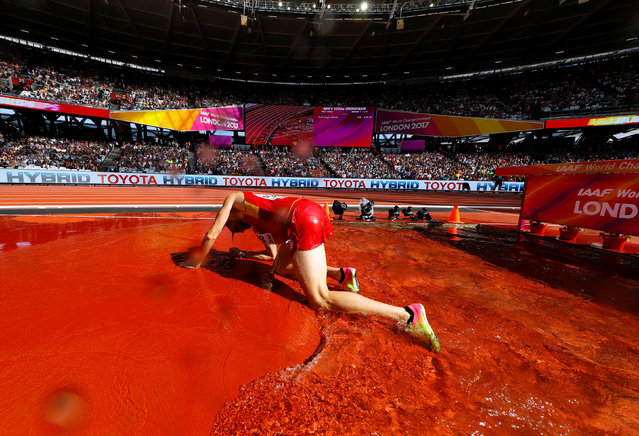 Spain' s Sebastian Martos falls at the water jump in the heats of the men' s 3,000 m steeplechase athletics event at the 2017 IAAF World Championships at the London Stadium in London on August 6, 2017. (Photo by Kai Pfaffenbach/Reuters) 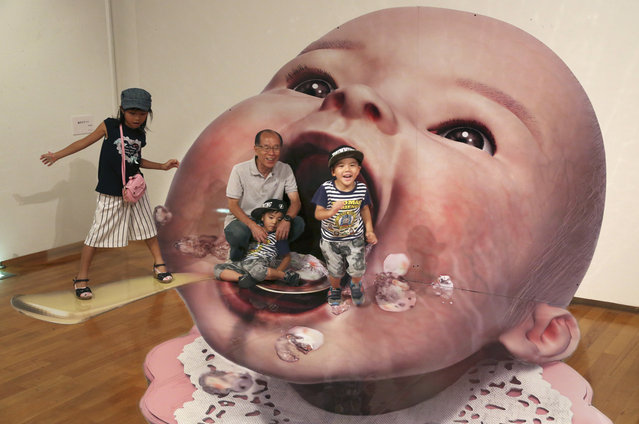 Visitors pose for a photo with a 3D image at a 3D trick art exhibition by Japanese artist Masashi Hattori in Kawasaki, near Tokyo, Saturday, Aug. 5, 2017. (Photo by Koji Sasahara/AP Photo) 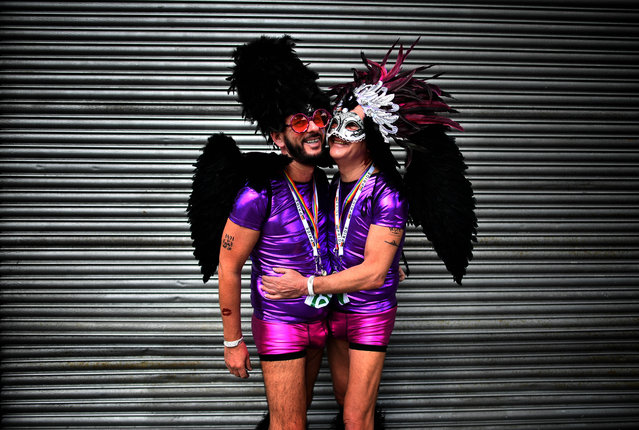 A gay couple embrace as they watch the Belfast Gay Pride march taking place on August 5, 2017 in Belfast, Northern Ireland. The province is the only part of the United Kingdom which does not recognise same s*x marriage. The Irish Republic's first gay prime minister Taoiseach Leo Varadkar today predicted it is only a matter of time before same s*x marriage is legalised in the north. Mr Varadkar was speaking at a Pride breakfast event. (Photo by Charles McQuillan/Getty Images) 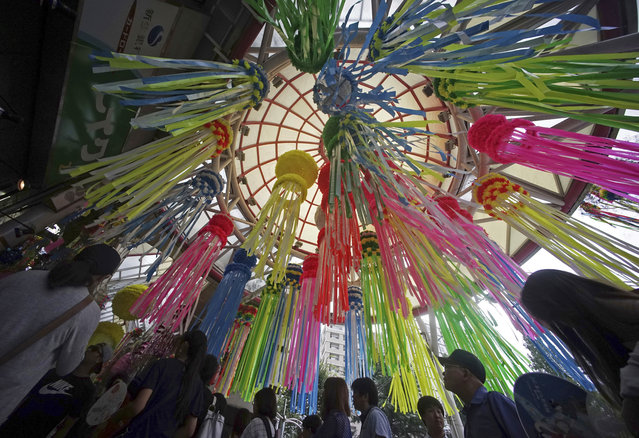 People walk under colorful paper streamers for the Tanabata Star Festival at a shopping arcade at Asagaya in Tokyo Saturday, August 5, 2017. According to legend, deities Orihime (Vega) and her lover Hikoboshi (Altair), separated by the Milky Way, are allowed to meet only once a year during this period. People celebrate the festival by writing wishes on strips of paper and hanging them under bamboo trees. (Photo by Eugene Hoshiko/AP Photo) 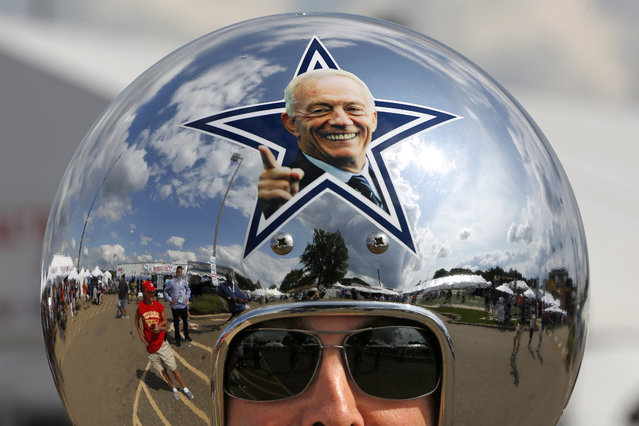 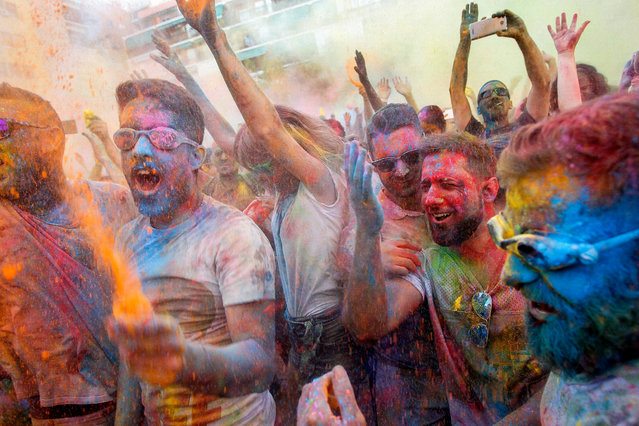 People take part in the fourth edition of the Monsoon Holi Madrid party at the multicultural district of Lavapies, in Madrid, Spain, 05 August 2017. Participants were prayed with thousands of liters of water, tinted with 600 kgs of colored powder. (Photo by EPA/Mariscal) 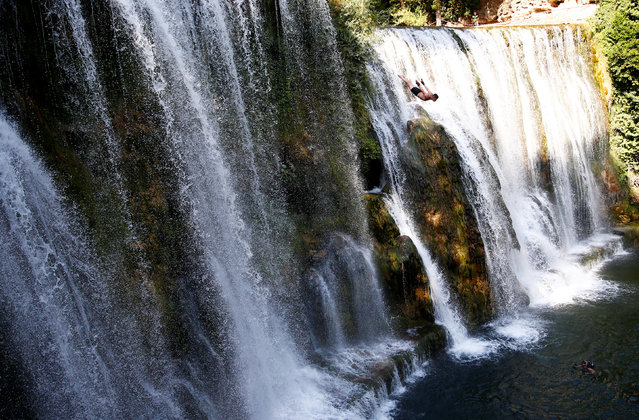 A competitor takes part in the annual international waterfall jumping competition held in the old town of Jajce, Bosnia and Herzegovina, August 5, 2017. (Photo by Dado Ruvic/Reuters) 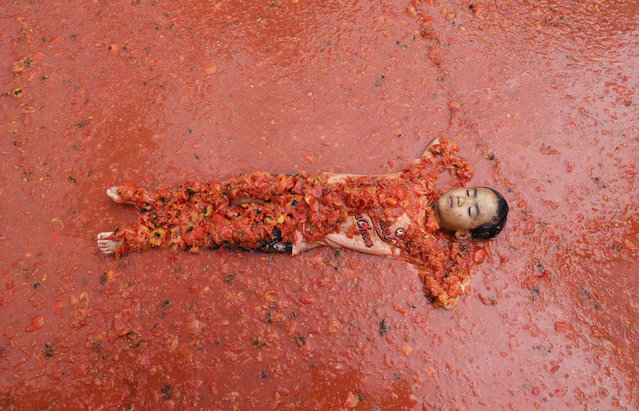 A boy lies in a pool of tomatoes during the 2017 Tomato Festival in Hwacheon, South Korea, Saturday, August 5, 2017. The festival runs from Aug. 4 to Aug. 7. (Photo by Ahn Young-joon/AP Photo) 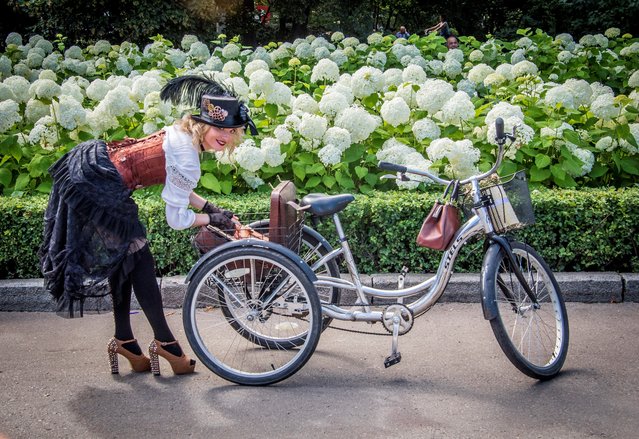 A participant in the 5th Lady on Bicycle annual festival opens her bag in the back basket of her tricycle in the Sokolniki park in Moscow on August 6, 2017. The festival's aim is to capture the city's fashionable women on vintage style bicycles. (Photo by Mladen Antonov/AFP Photo)
Edit Del
07 Aug 2017 07:49:00, post received 0 comments
Publication archive:
←   →
Popular tags:
All tags
Last searches: