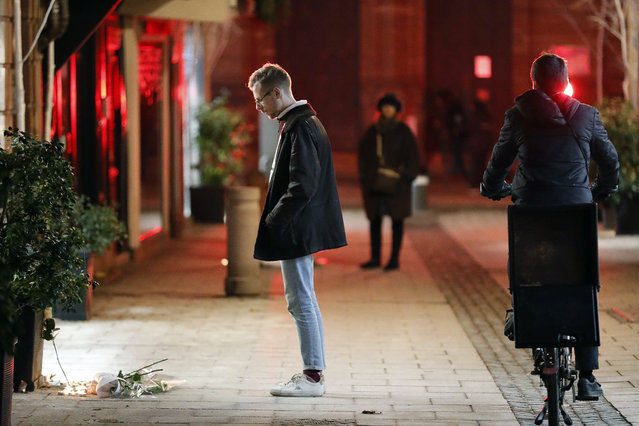 A man pays respects to the victims the night following an attack that killed three persons and wounding at least 13, in Strasbourg, eastern France, Wednesday, December 12, 2018. More than 24 hours after a man sprayed gunfire at crowds in France's largest Christmas market as he shouted “God is great!” over 700 security forces combed the eastern city of Strasbourg on Wednesday for the 29-year-old suspect who's been in trouble with the law since age 10. (Photo by Jean Francois Badias/AP Photo) 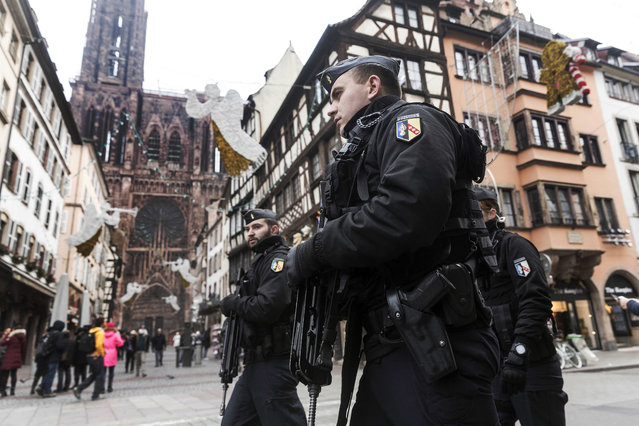 French police officers patrol next to Notre-Dame cathedral of Strasbourg following a shooting in the city of Strasbourg, eastern France, Wednesday, December 12, 2018. A man who had been flagged as a possible extremist sprayed gunfire near the city of Strasbourg's famous Christmas market Tuesday, killing three people, wounding 12 and sparking a massive manhunt. France immediately raised its terror alert level. (Photo by Jean Francois Badias/AP Photo) 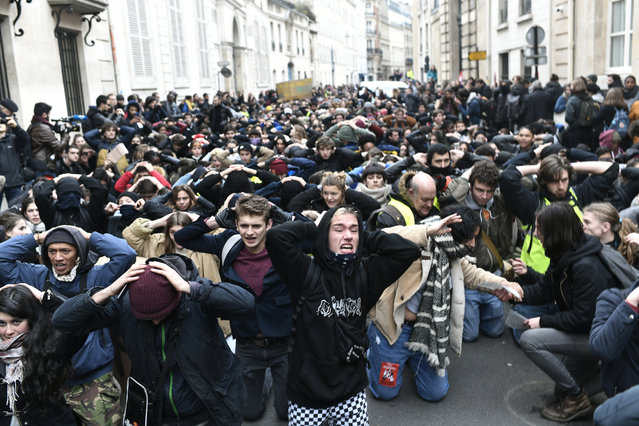 High school students demonstrate on their knees on December 11, 2018 in Paris, France, to protest against the different education reforms including the overhauls and stricter university entrance requirements. Images of dozens of high-school pupils kneeling with their hands behind their heads during mass round-ups sparked an outcry on December 7, 2018. Protests at some 280 schools have added to a sense of general revolt in France. (Photo by Stephane De Sakutin/AFP Photo) 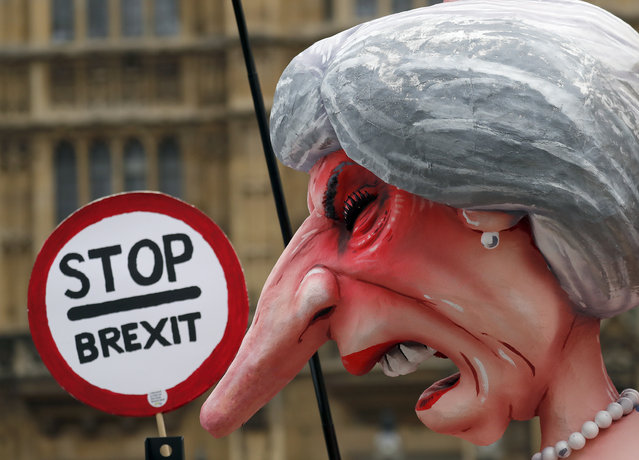 A sculpture depicting Britain's Prime Minister Theresa May stands opposite Parliament as the protest against Brexit continuous in London, Wednesday, December 12, 2018. (Photo by Frank Augstein/AP Photo) 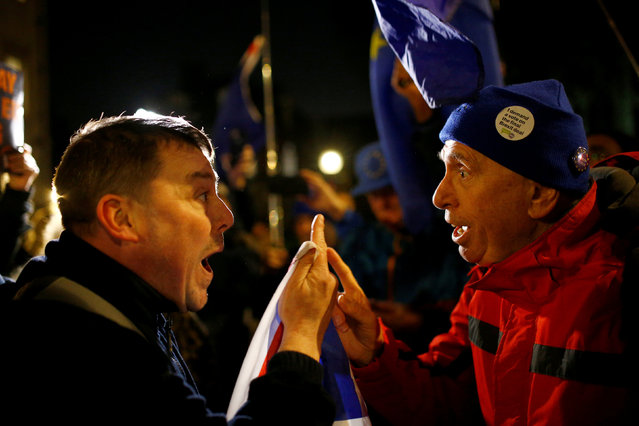 Pro-Brexit and anti-Brexit demonstrators argue with each other opposite the Houses of Parliament, in Westminster, central London, Britain December 11, 2018. (Photo by Henry Nicholls/Reuters) 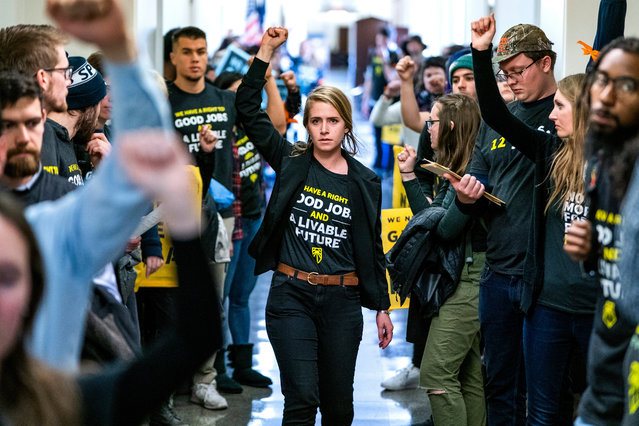 Supporters of Representative elect Ocasio-Cortez's proposed Select Committee on a “green New Deal” rally outside the office of Democratic Congressman from Maryland and House Minority Whip Steny Hoyer in the Longworth House Office Building in Washington, DC, USA, 10 December 2018. The rally was organized by Sunrise, a “movement to stop climate change and create millions of good jobs in the process”. Dozens of activists were arrested during their action. (Photo by Jim Lo Scalzo/EPA/EFE) 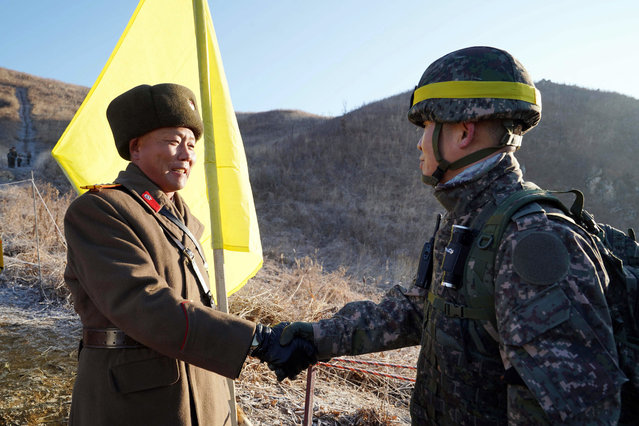 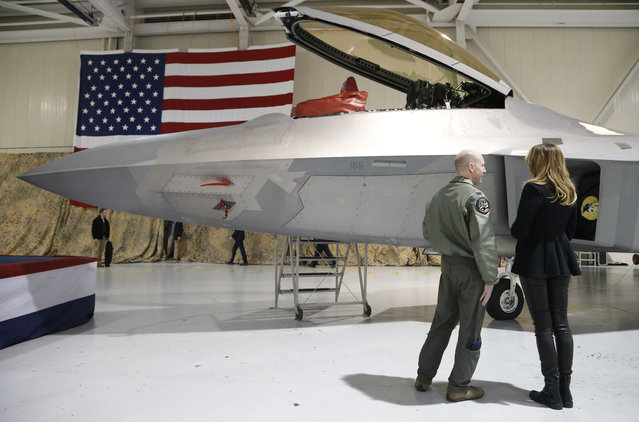 First lady Melania Trump, right, talks with Col. Jason Hinds, Commander of the First Fighter Wing as he shows her the cockpit of an F22 fighter at Joint Base Langley in Hampton, Va., Wednesday, December 12, 2018. (Photo by Steve Helber/AP Photo) 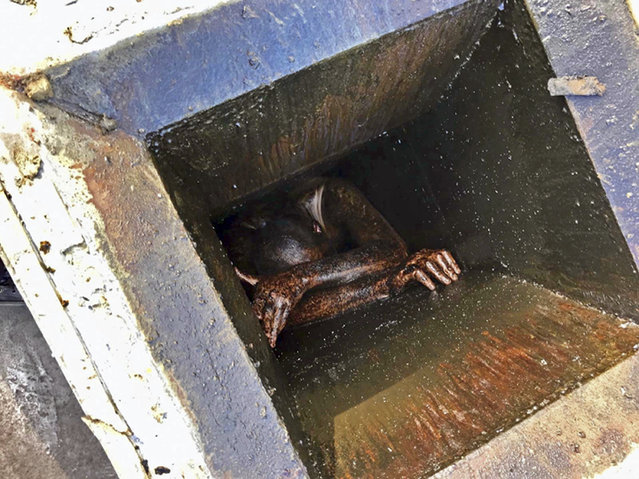 This photo provided by the Alameda County Sheriff's Office shows a man who was possibly trying to burglarize an abandoned Chinese restaurant in San Lorenzo, Calif., trapped in a grease vent before he was rescued Wednesday, December 12, 2018. Officials say he had been trapped for two days. Deputies and firefighters were called to the vacant building on Wednesday after someone heard cries for help. The sheriff tweeted that the man was trespassing and possibly trying to burglarize the empty restaurant. (Photo by Alameda County Sheriff's Office via AP Photo) 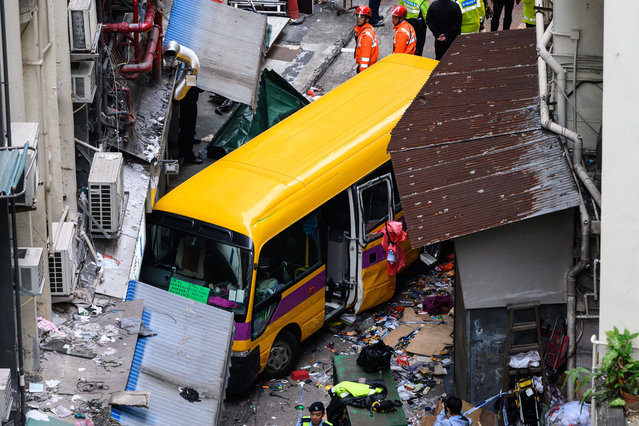 Police officers and rescuers are seen at the accident site after a school bus rolled down a street and crashed to a standstill, killing four people and injuring 11 others, in North Point, Hong Kong, China on December 10, 2018. (Photo by Imaginechina/Rex Features/Shutterstock) 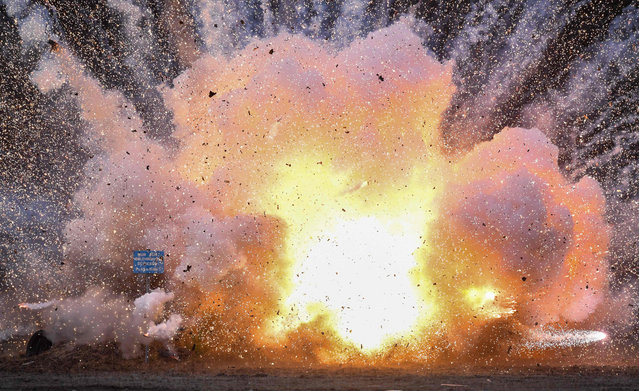 Illegal firecrackers are being detonated in a controlled explosion on December 10, 2018 in Weisskeissel, eastern Germany, close to the Polish border. (Photo by Patrick Pleul/DPA/AFP Photo) 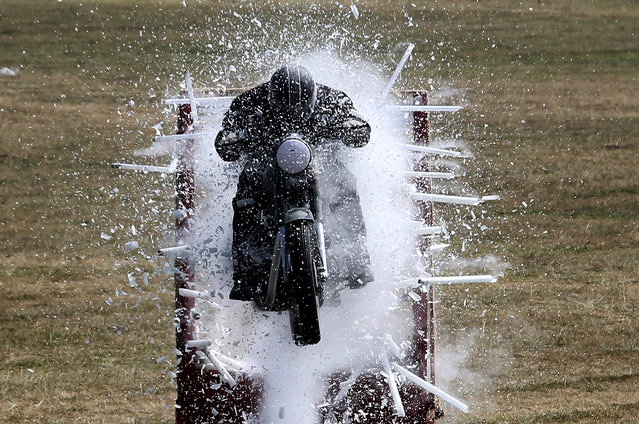 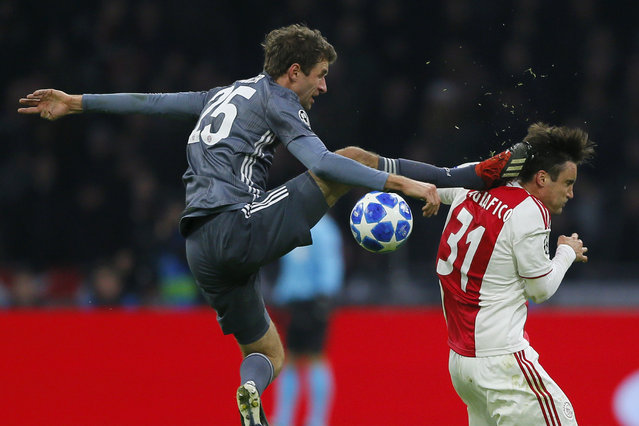 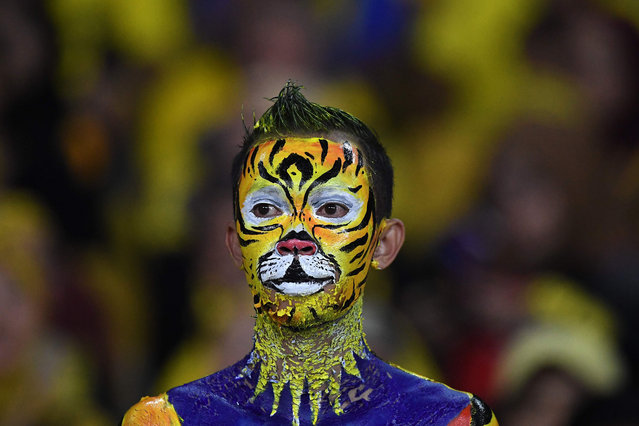 A Malaysia's fan waits for the start of the first leg of AFF Suzuki Cup 2018 final football match between Malaysia and Vietnam at the Bukit Jalil National Stadium in Kuala Lumpur on December 11, 2018. (Photo by Mohd Rasfan/AFP Photo) 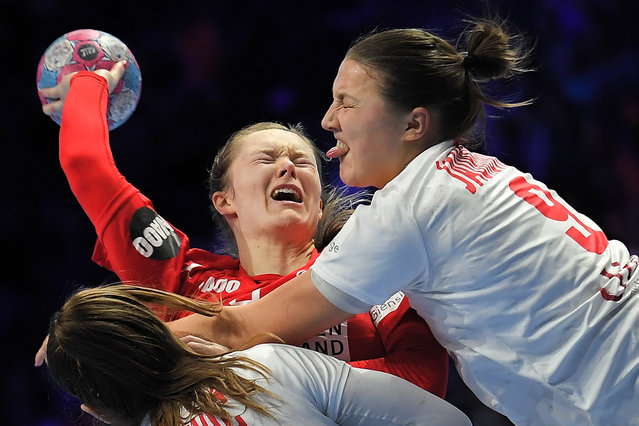 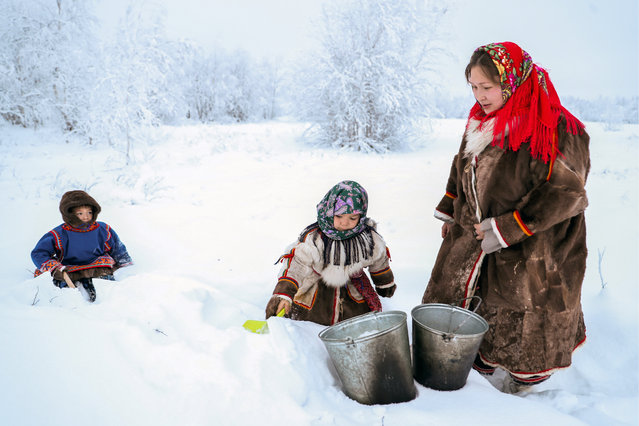 A woman with children gathers show for melting in the village of Gornoknyazevsk, Priuralsky District, Yamalo-Nenets Autonomous Area, Russia on December 11, 2018. Nomadic indigenous peoples of Northern Russia live in the so-called chums, a round tent-like temporary dwelling made of wooden poles wrapped in reindeer hides, with a fireplace in the middle; the wives of reindeer herders do the housekeeping there and are called chum-keepers. Since 2018, a chum-keeper is listed in Russia's Occupational Classification. (Photo by Donat Sorokin/TASS) 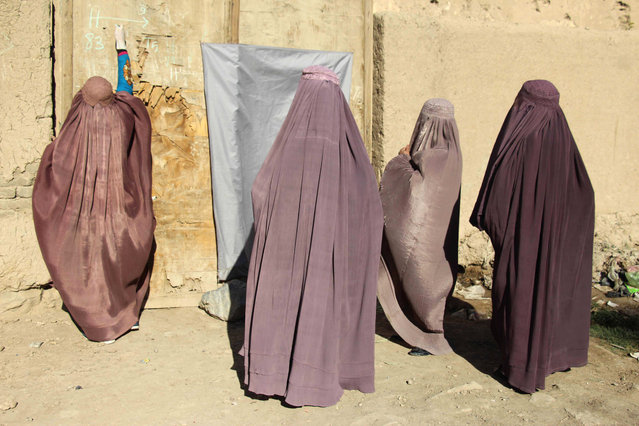 Health workers administer polio vaccination to children in Kandahar, Afghanistan, 11 December 2018. Last vaccination campaign for year 2018 was completed in Afghanistan on 11 December, with total of 21 Polio cases reported, nine of which from Kandahar. Afghanistan is one of the two countries along with neighboring Pakistan where polio is still endemic, crippling hundreds of children every year. (Photo by Muhammad Sadiq/EPA/EFE) 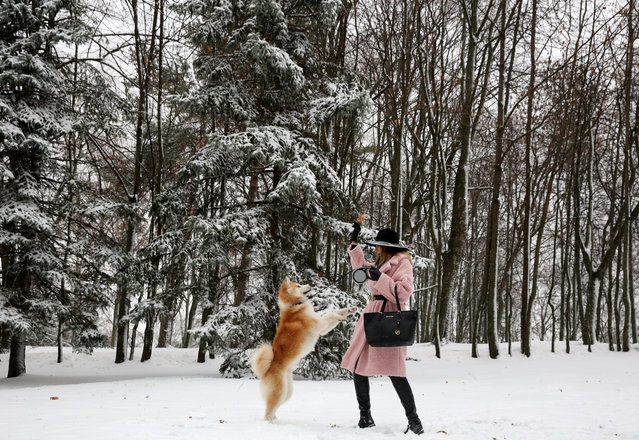 A woman plays with a dog in a Central Gorky Park on a winter day in Minsk, Belarus, 08 December 2018. Temperature in Minsk is zero degrees Celsius, local media reports. (Photo by Tatyana Zenkovich/EPA/EFE) 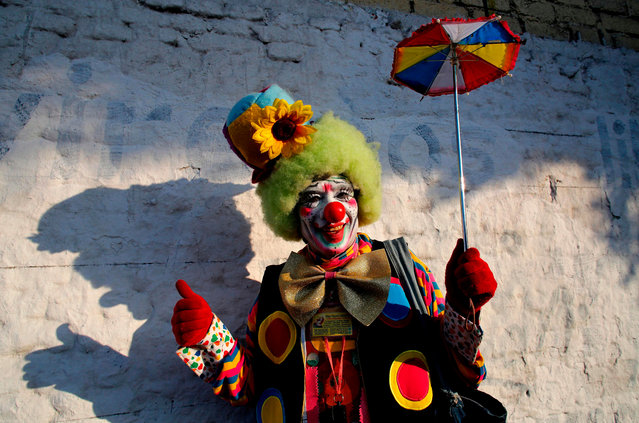 A clown poses for a photography during the International Clown Day in Guadalajara, Mexico, on December 10, 2018. (Photo by Ulises Ruiz/AFP Photo) 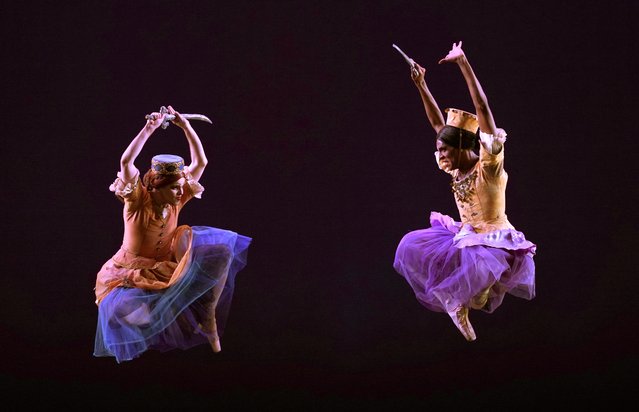 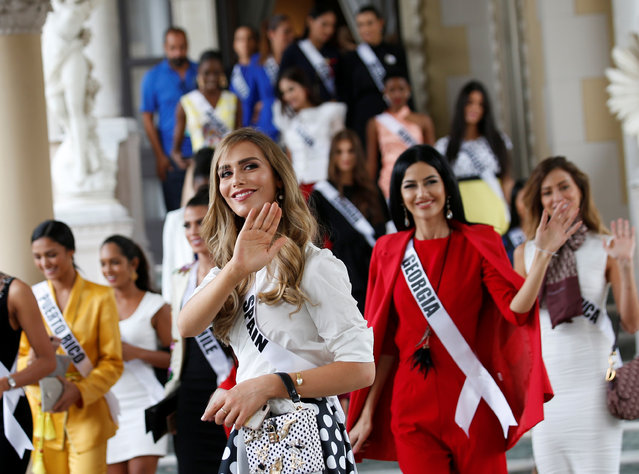