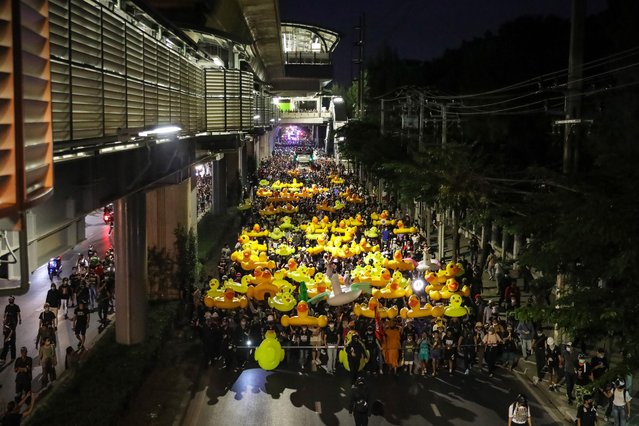 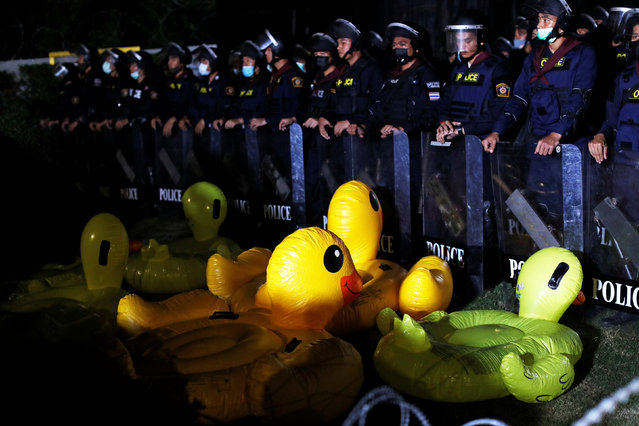 Police officers stand in front of inflatable ducks at 11th Infantry Regiment during a pro-democracy rally demanding the prime minister to resign and reforms on the monarchy, in Bangkok, Thailand, November 29, 2020. (Photo by Jorge Silva/Reuters) 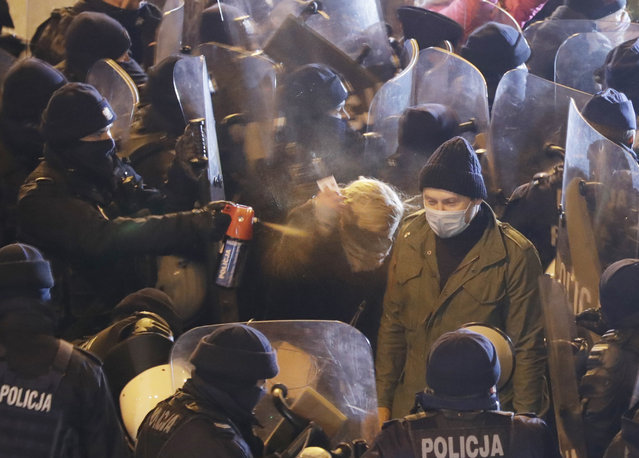 Police use tear gas against an opposition lawmaker, Barbara Nowacka, as protesters block a major thoroughfare in Warsaw, Poland, Saturday November 28, 2020. The police blocked protesters from marching in Warsaw as demonstrations took place across Poland against an attempt to restrict abortion rights and recent use of force by police. (Photo by Czarek Sokolowski/AP Photo) 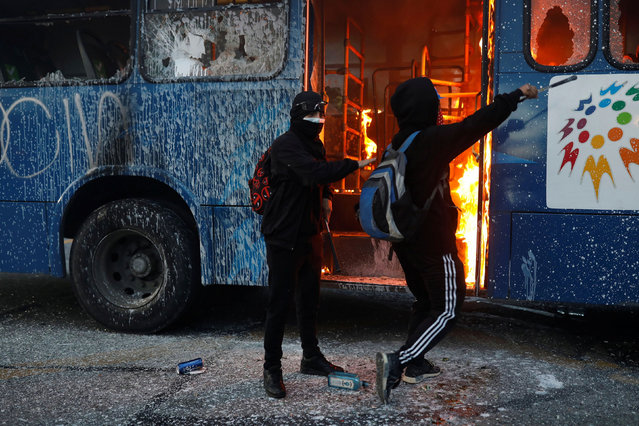 Demonstrators break the windows of a bus during a protest to demand the resignation of Guatemala's President Alejandro Giammattei in Guatemala City, Guatemala on November 28, 2020. (Photo by Luis Echeverria/Reuters) 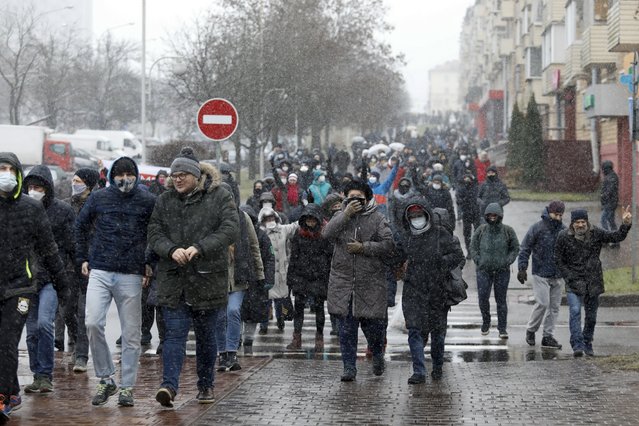 Demonstrators, some of them wearing face masks to help curb the spread of the coronavirus attend an opposition rally to protest the official presidential election results in Minsk, Belarus, Sunday, November 29, 2020. A human rights group in Belarus says over 180 people have been detained during Sunday protests against the country's authoritarian president, who won his sixth term in office in a vote widely seen as rigged. (Photo by AP Photo/Stringer) 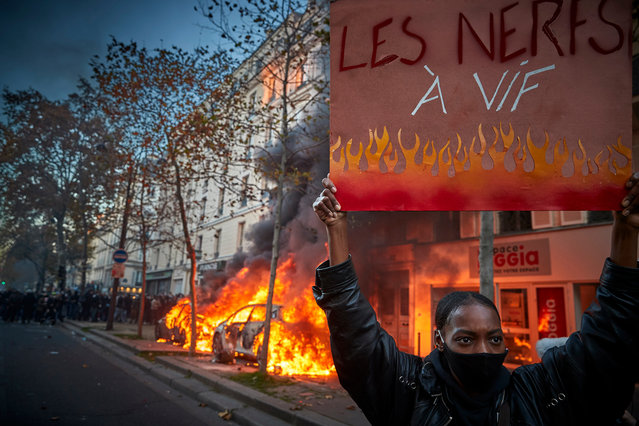 A protestor stands next to burning cars with a placard which reads “our blood is boiling” as thousands demonstrate against the French Government's Global Security Law on November 28, 2020 in Paris, France. France's lawmakers passed and adopted the bill known as article 24 of the “comprehensive security” law prohibiting the dissemination of images of the police, alarming journalists and activists saying civil liberties and press freedom could be compromised. Several MPs have criticised the bill's implications and President Macron has come under fire from national journalism unions and the UN for the law and police accountability. (Photo by Kiran Ridley/Getty Images) 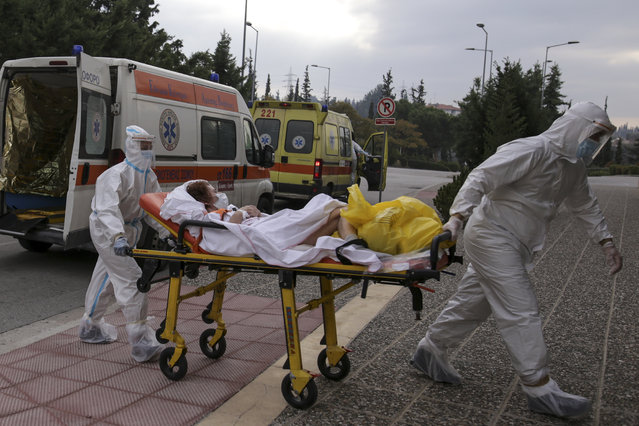 Medical personnel transfer a COVID-19 patient from a state to a private clinic which has been appropriated, in the northern city of Thessaloniki, Greece, Sunday, November 29, 2020. Greece's Health ministry has forcibly appropriated two clinics and their staff in the country's second populated city, where the outbreak is the most severe. (Photo by Achilleas Chiras/AP Photo) 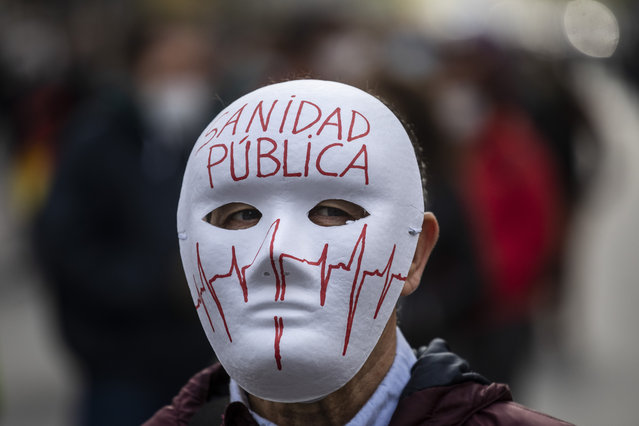 A demonstrator attends a protest to demand more resources for public health system in Madrid, Spain, Sunday, November 29, 2020. The organizers delivered a manifesto to the Madrid regional authorities demanding the end privatization of the health system. The mask reads in Spanish “Public health system”. (Photo by Bernat Armangue/AP Photo) 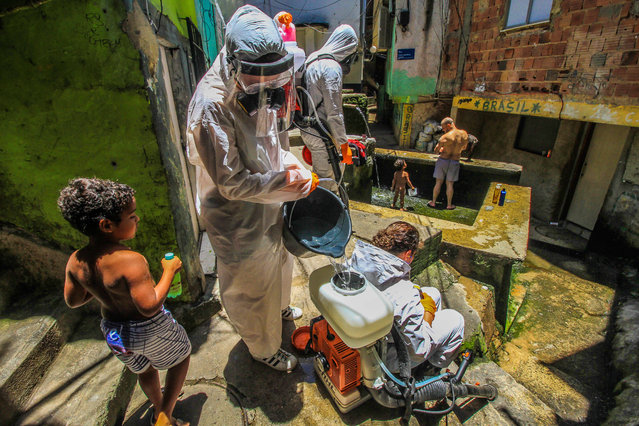 Residents of the Santa Marta favela, Botafogo, south zone in Rio de Janeiro, Brazil unite to sanitize the community and fight the advance of the new coronavirus this Saturday, November 28, 2020. (Photo by Ellan Lustosa/ZUMA Wire/Rex Features/Shutterstock) 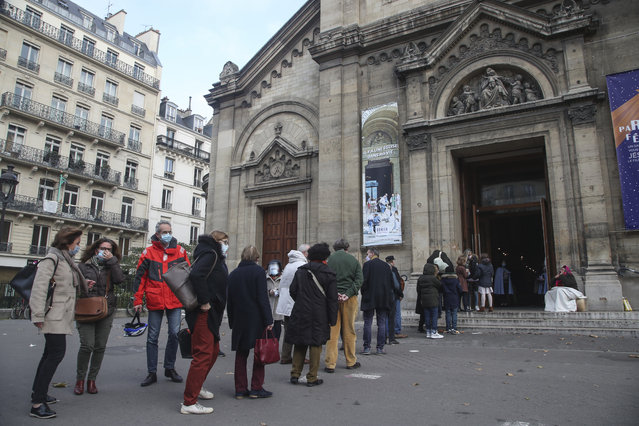 Church-goers wearing face masks as a precaution against the coronavirus lineup outside the Notre-Dame-des-Champs church in Paris, Sunday, November 29, 2020. French churches, mosques and synagogues can open their doors again to worshippers – but only a few of them, as France cautiously starts reopening after a second virus lockdown. Some churches may defy the 30-person limit they feel as too unreasonable, and other sites may stay closed until they can reopen for real. (Photo by Michel Euler/AP Photo) 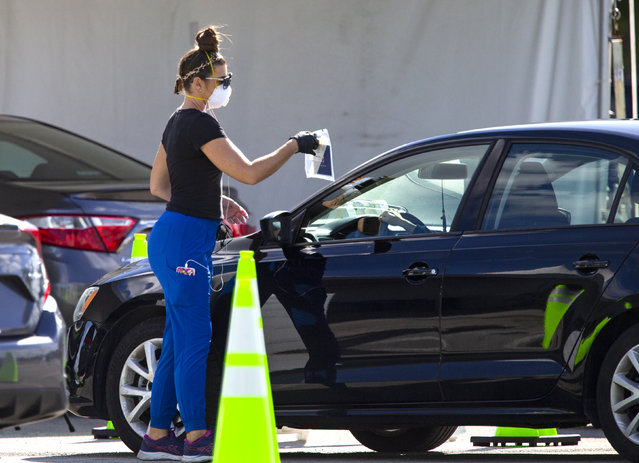 A health care worker direct a person to use a swab for a self administered test at the Miami-Dade County Youth Fairgrounds at Tamiami Park, on Sunday, November 29, 2020 in Miami. (Photo by David Santiago/Miami Herald via AP Photo) 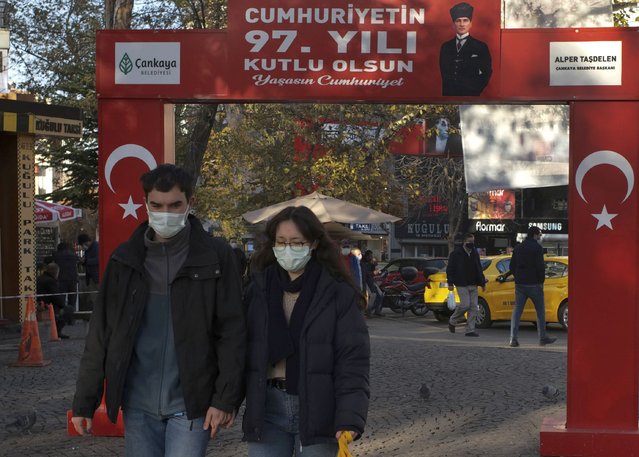 People wearing masks to help protect against the spread of coronavirus, walk along a popular street in Ankara, Turkey, Friday, November 27, 2020. Turkey's COVID-19 fatalities continue to rise, hitting another record Sunday, Nov 29, 2020, with 185 new deaths. The Turkish government resumed reporting all positive cases this week after only reporting symptomatic patients for four months. Night-time curfews over the weekend are in effect for a second week across the country but media reports show packed public spaces during the day. (Photo by Burhan Ozbilici/AP Photo) 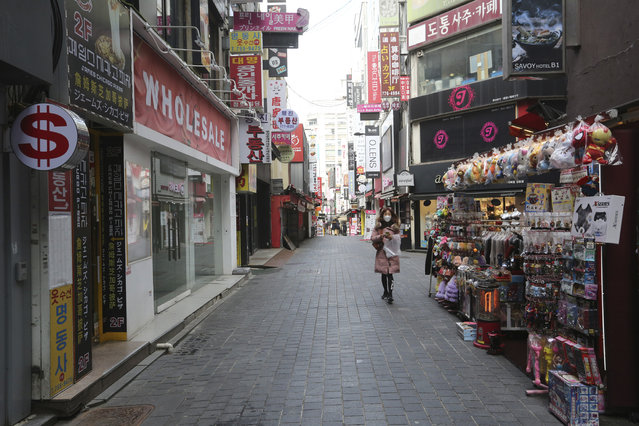 A woman wearing a face mask as a precaution against the coronavirus walks along a shopping street in Seoul, South Korea, Sunday, November 29, 2020. South Korea is shutting down indoor gyms offering intense workout classes and banning year-end parties at hotels in the greater Seoul area to fight the virus. Prime Minister Chung Sye-kyun said Sunday. (Photo by Ahn Young-joon/AP Photo) 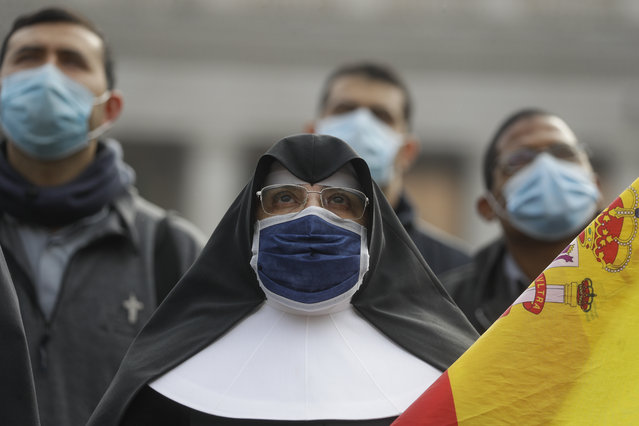 A nun wearing a face mask as she looks up at Pope Francis reciting the Angelus prayer from his studio window overlooking St.Peter's Square at the Vatican, Sunday, November 29, 2020. Pope Francis, joined by the church's newest cardinals at Mass, has warned against mediocrity as well as promoting one's career rise. (Photo by Gregorio Borgia/AP Photo) 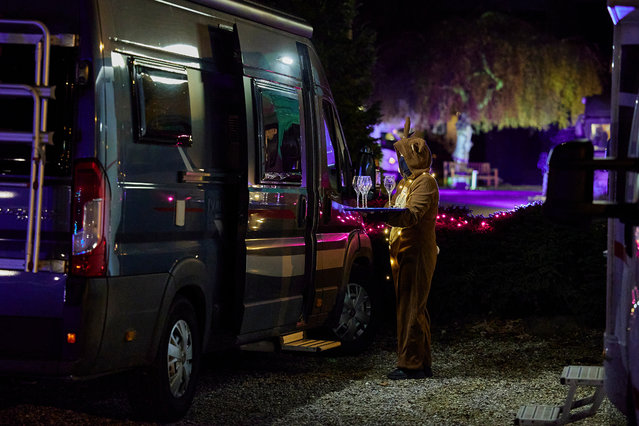 A costumed waitress serves drinks during a four-course dinner to guests in their recreational vehicle (RV) in the parking lot of the Kochschule Neumuenster cooking school during the second wave of the coronavirus pandemic on November 28, 2020 in Neumuenster, Germany. The school, which is otherwise closed due to current lockdown measures, has begun offering the “candle-light RV dinners” three times a week for up to 15 RVs in an evening as a means to stay in business during the pandemic. Restaurants in Germany have been closed since the beginning of November and will likely remain so into January. (Photo by Morris MacMatzen/Getty Images) 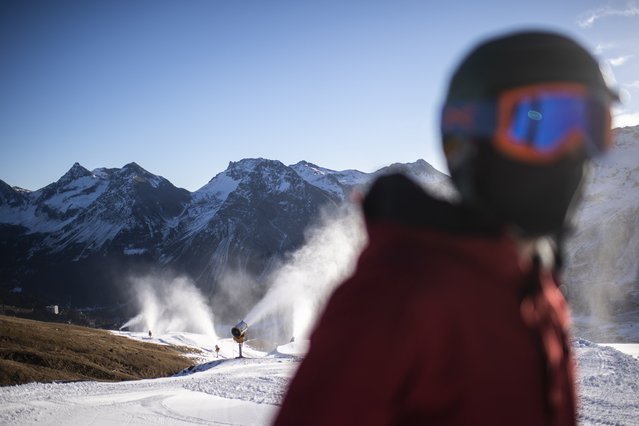