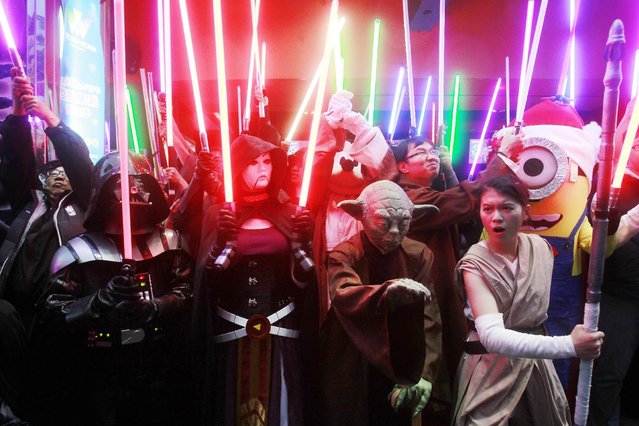 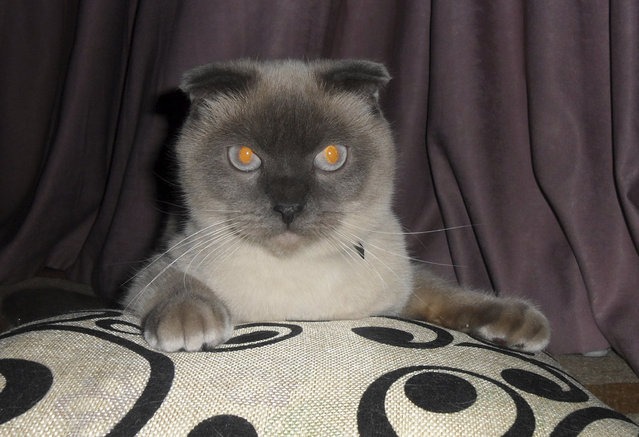 A Siamese cat named Barsik in Barnaul, The Siberian city of 650,000 people, which lies 2,900 kilometers (1,800 miles) east of Moscow, Russia, Saturday, December 19, 2015, and it seems the residents of Barnaul want Barsik the cat to be their next mayor. An informal online poll asking the residents to express their preferences among the six official candidates and the Siamese cat named Barsik, showed the feline nabbing more than 90 percent of the vote. (Photo by AltaiOnline/AP Photo) 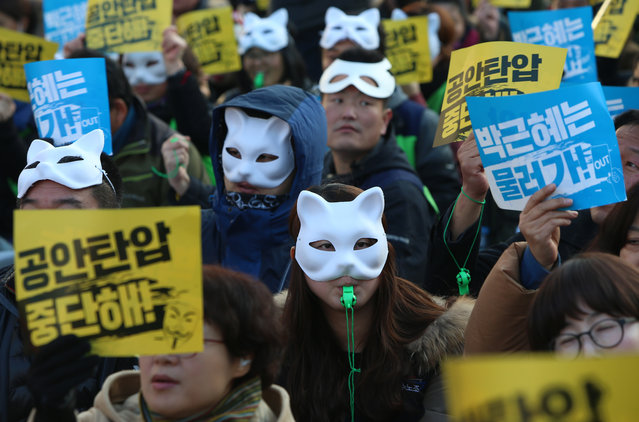 South Korean protesters wear masks and hold placards as they gather for a rally against President Park Gyun-Hye and the government's policies, in Seoul, South Korea, December 19, 2015. Park Gyun-Hye stated on November 16 that local protesters in masks could be infiltrated by members of Islamic State (IS). The protesters gathered to demand improvement of the government's labor policy and the resignation of South Korean president Park. (Photo by Yang Ji-Woong/EPA) 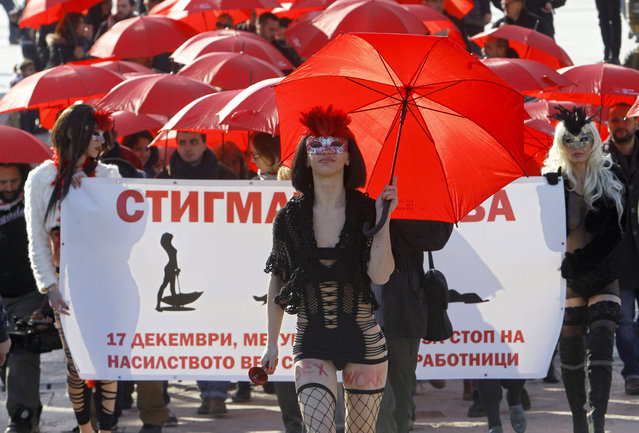 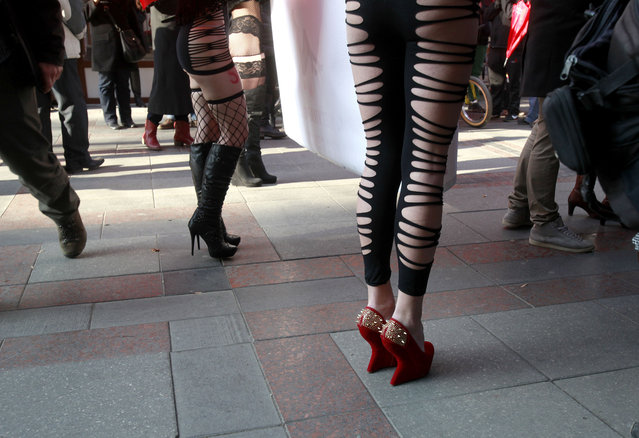 Women participate in a march through a street in Skopje, Macedonia, marking the International Day to End Violence against s*x workers, Thursday, December 17, 2015. (Photo by Boris Grdanoski/AP Photo) 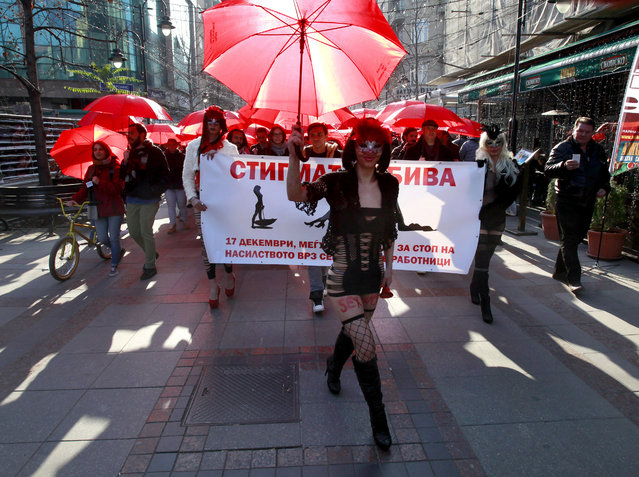 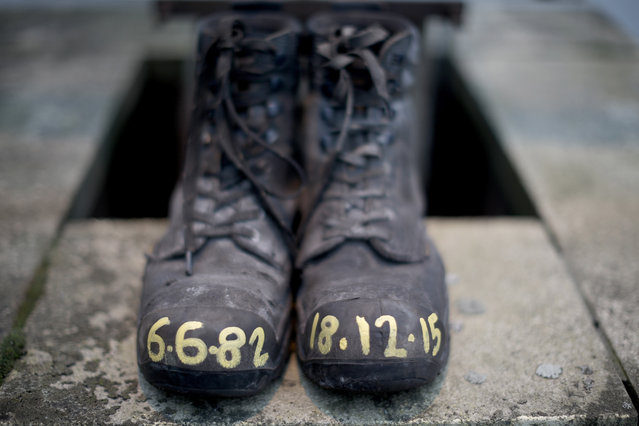 A pair of miners boots are left outside Kellingley Colliery as Miners, union members and the local community take part in a protest march from Knottingley Town Hall to the Miners Welfare Center marking the end of deep coal mining in Britain on December 19, 2015 in Knottingley, England. Kellingley Colliery closed yesterday. The last deep mine in Britain began production in 1965. Its closure will complete a carefully managed two-year plan for the UKs deep mines. This has been implemented by UK Coal with financial support from the British government. It follows a long period of difficult trading conditions largely due to low international coal prices. (Photo by Christopher Furlong/Getty Images) 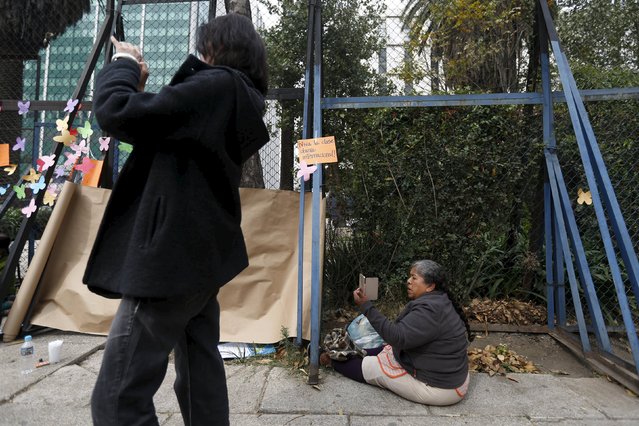 A migrant (R) and activist take photos with their cell phones during a demonstration for the rights of refugees migrants near the U.S. embassy building in Mexico City, December 18, 2015. The International Migrants Day is celebrated on December 18 annually. (Photo by Edgard Garrido/Reuters) 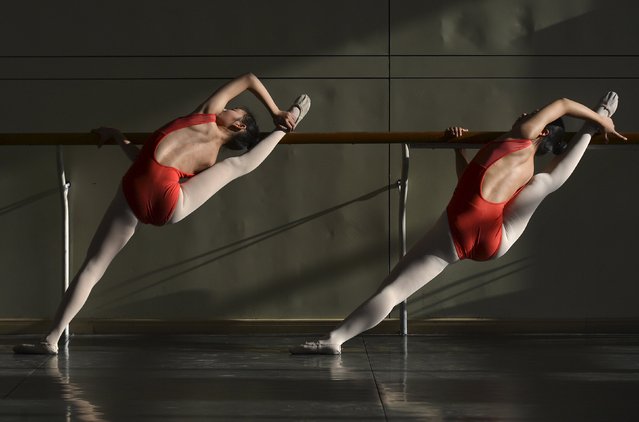 Students majoring in dance stretch as they participate in a training session at an arts school in Hefei, Anhui province, China, December 16, 2015. (Photo by Reuters/Stringer) 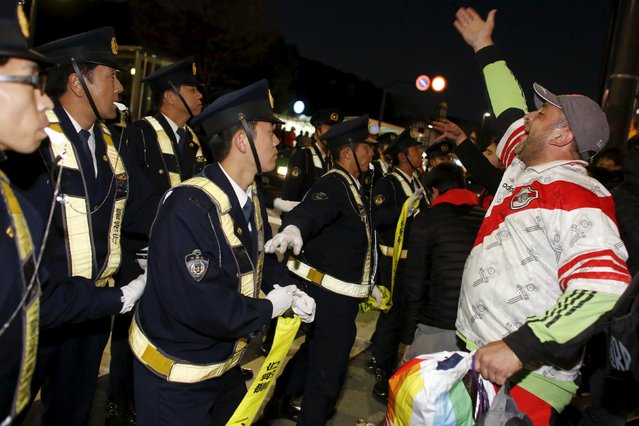 Police try to control supporters of Argentine club River Plate as they briefly occupy a pedestrian crossing in central Tokyo after a pre-match party in Tokyo's Yoyogi park, ahead of their team's Club World Cup final soccer match against Barcelona, Japan, December 19, 2015. (Photo by Thomas Peter/Reuters) 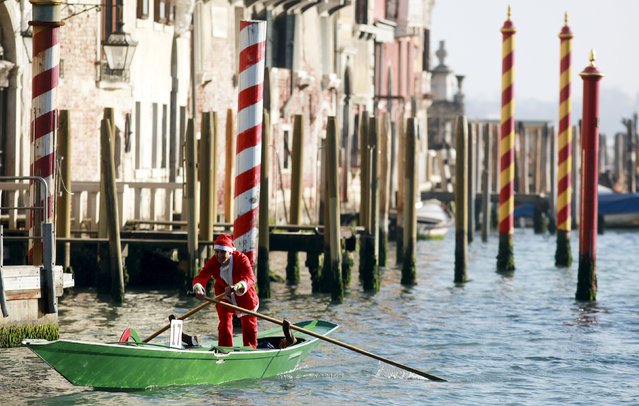 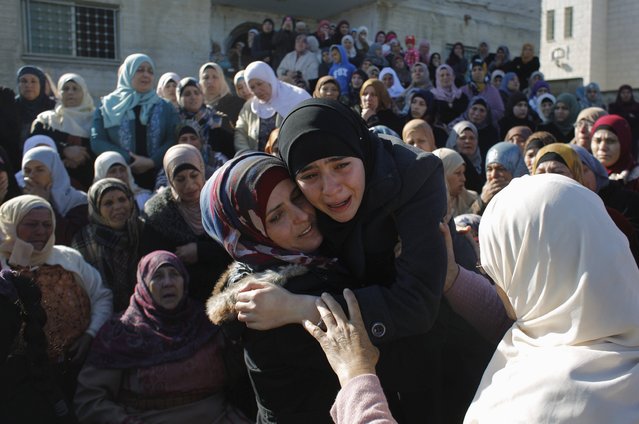 Relatives of Palestinian Nashat Asfour, whom medics said was killed by Israeli troops during clashes with Palestinian protesters on Friday, mourn during his funeral in the West Bank village of Singel near Ramallah December 19, 2015. (Photo by Mohamad Torokman/Reuters) 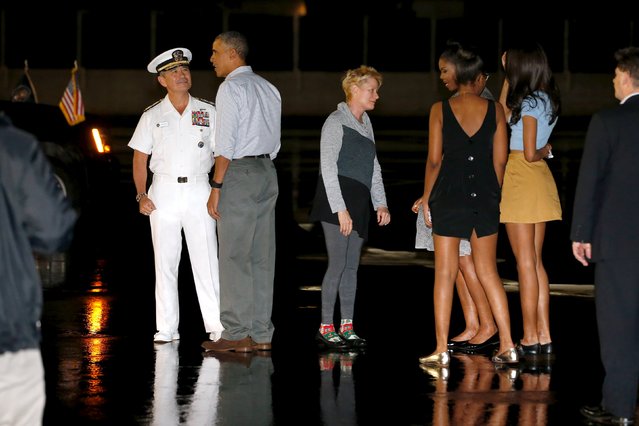 U.S. President Barack Obama (2nd L) and his family are greeted by U.S. Navy Admiral Harry Harris (L) and his wife Bruni Bradley (3rd L) as the Obamas arrive via Air Force One at Joint Base Pearl Harbor-Hickam in Honolulu, Hawaii December 19, 2015. (Photo by Jonathan Ernst/Reuters) 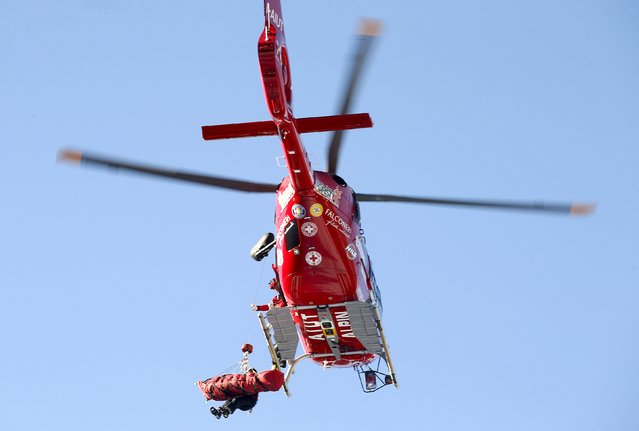 Matthias Mayer of Austria is lifted into an emergency helicopter after he crashed during the men's downhill race at the Alpine Skiing World Cup in Val Gardena, northern Italy, December 19, 2015. (Photo by Alessandro Garofalo/Reuters) 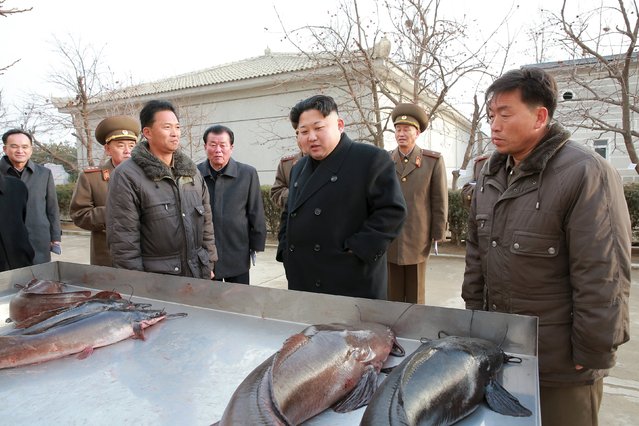 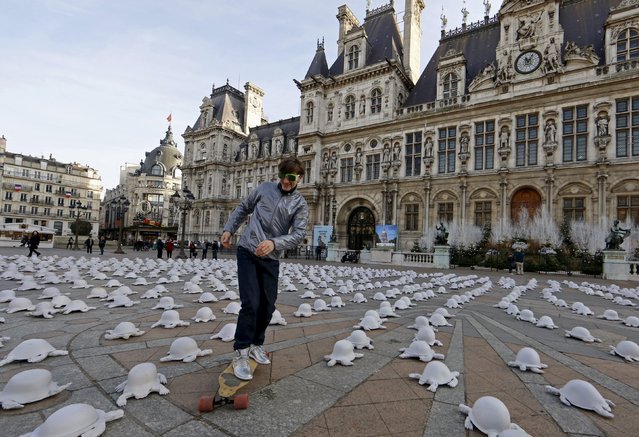 A man rides a skateboard through French artist Rachid Khimoune's installation which features a thousand turtle-shaped sculptures in front of the city hall in Paris, France December 19, 2015. (Photo by Jacky Naegelen/Reuters) 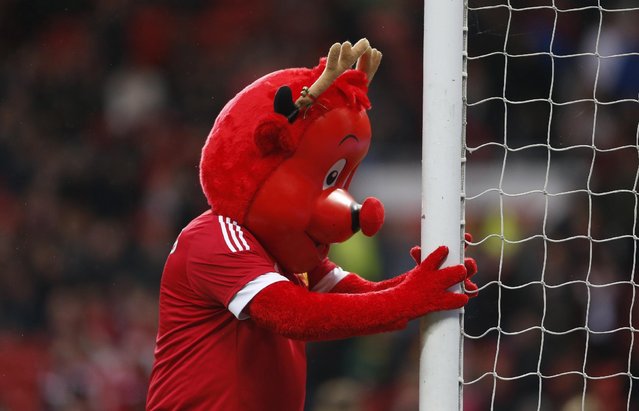 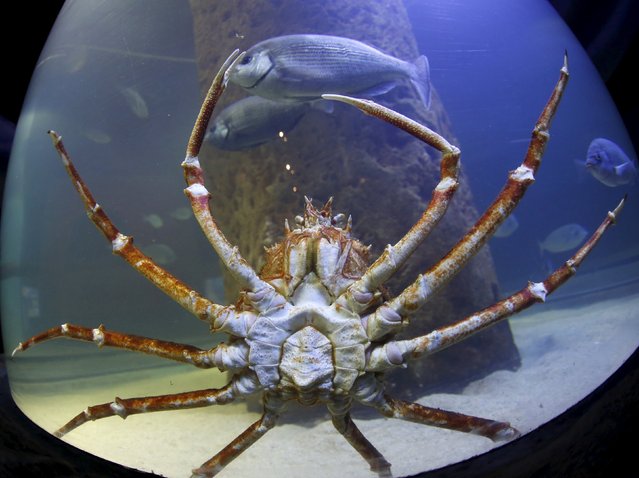 A giant Japanese spider crab crawls along the side of its tank at the Malta National Aquarium in Qawra, outside Valletta, Malta, December 19, 2015. (Photo by Darrin Zammit Lupi/Reuters) 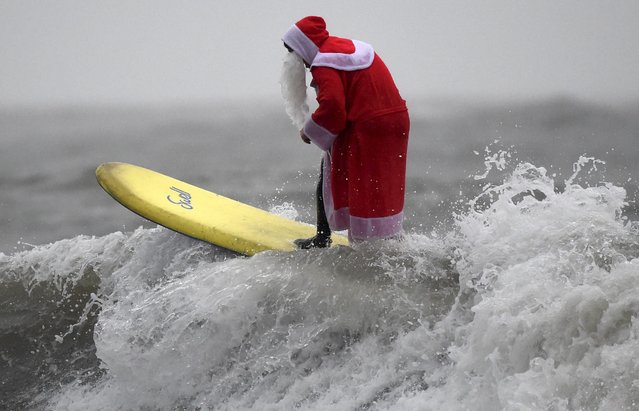 A member of the Langland Board Surfers group takes part in a Surfing Santa competition at Langland Bay in Gower, Wales, December 19, 2015. (Photo by Rebecca Naden/Reuters) 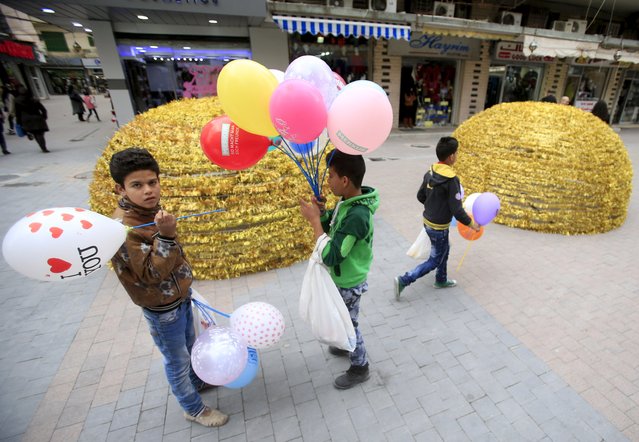 Children carry balloons near decorations set up ahead of the birthday of Prophet Mohammed in Sidon, south Lebanon December 19, 2015. (Photo by Ali Hashisho/Reuters) 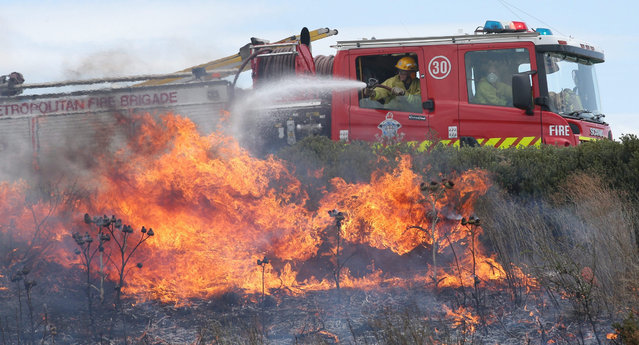 Members of the Metropolitan Fire Brigade (MFB) battle against a fast moving grass fire in the Epping area in the northern suburbs of Melbourne, Australia, 19 December 2015. Strong wind gusts up to 80kph are expected to make firefighters' jobs difficult in dry conditions. (Photo by David Crosling/EPA) 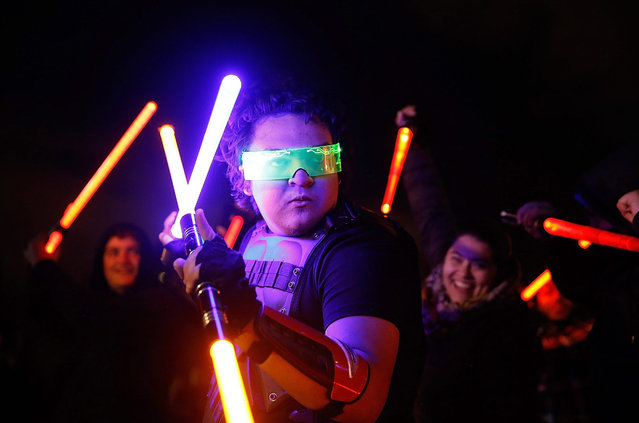 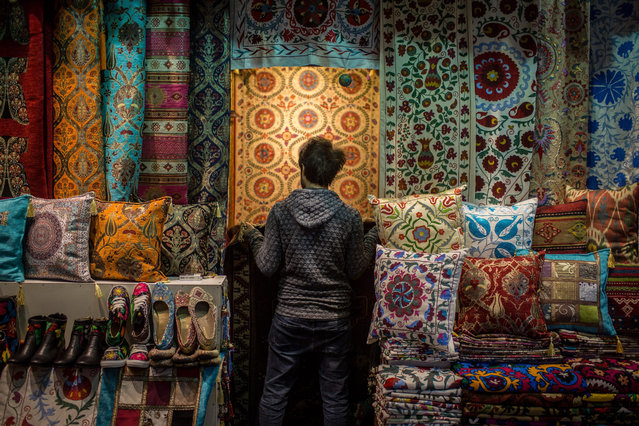 A man works at a rug shop at the Grand Bazaar on December 18, 2015 in Istanbul, Turkey. Despite the expected growth in western and luxury brands, handmade, traditional and turkish made products continue to be popular amongst local communities. The cheap price and convenience of local neighborhood stores and markets continues to grow. (Photo by Chris McGrath/Getty Images) 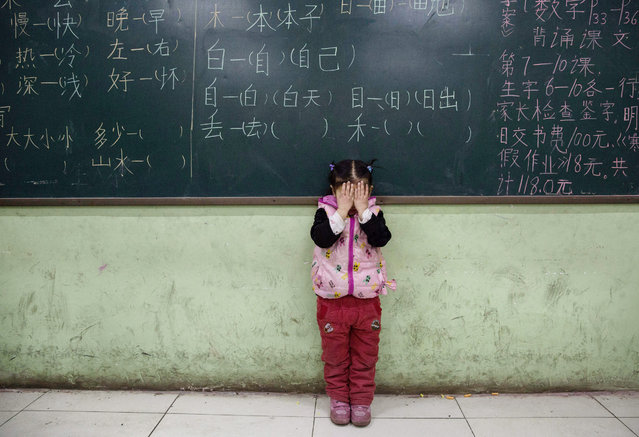 A Chinese student who is a child of migrants does eye exercises as part of a class at an un-official school on December 18, 2015 in Beijing, China. Schools for children of migrants are often unofficial or unrecognized by the state, and were established as a response to the education void created by the decades-long household registration or hukou system. A person's hukou entitles them to social services in their birthplace, meaning millions of Chinese who have migrated from rural areas to cities have been denied rights to urban public services. Reforms to the hukou system come after heavy criticism that it has aggravated a deep social divide in China. The changes could pave the way for up to 70 million children of migrant workers left behind in villages to join their parents in cities. (Photo by Kevin Frayer/Getty Images) 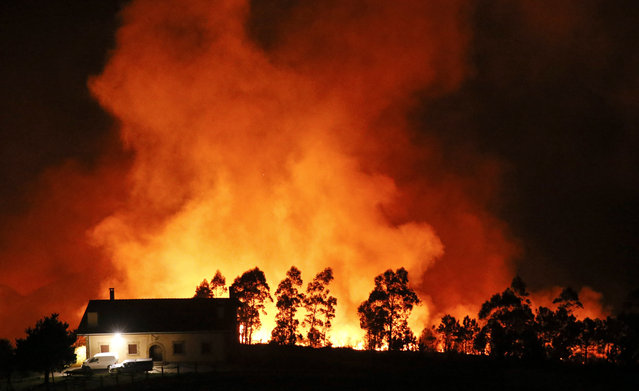 General view of the fire at Igueldo Hill in San Sebastian, Basque Country, Spain on December 19, 2015. According to local authorities 50 hectares have burnt. (Photo by Juan Herrero/EPA) 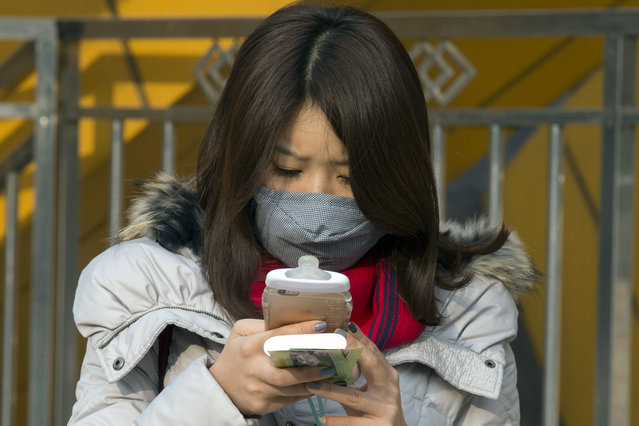 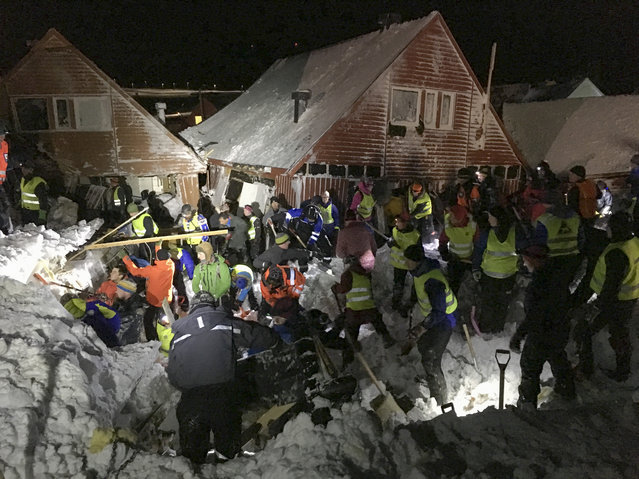 Search and rescue crews work after an avalanche hit several houses in Longyearbyen, Norway, Saturday December 19. 2015. It is unclear about the number of people caught in the avalanche but authorities are calling for volunteers with shovels to help in the search to locate victims. (Photo by NTB scanpix via AP Photo) 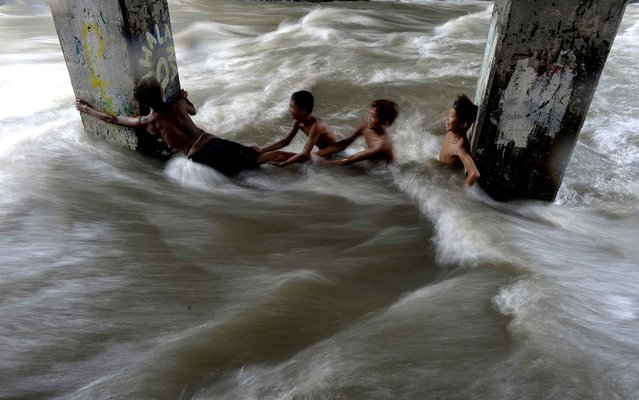 Children swim in a swollen creek under a flyover in Manila on December 19, 2015. Heavy rains pummelled the entire Philippines on December 19, flooding more areas as the government declared a “state of national calamity”. (Photo by Noel Celis/AFP Photo) 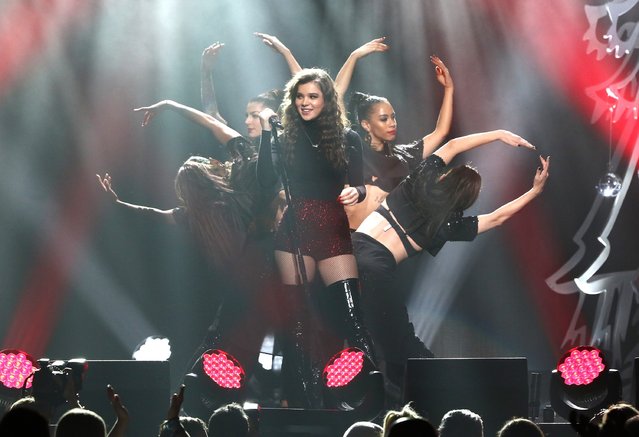