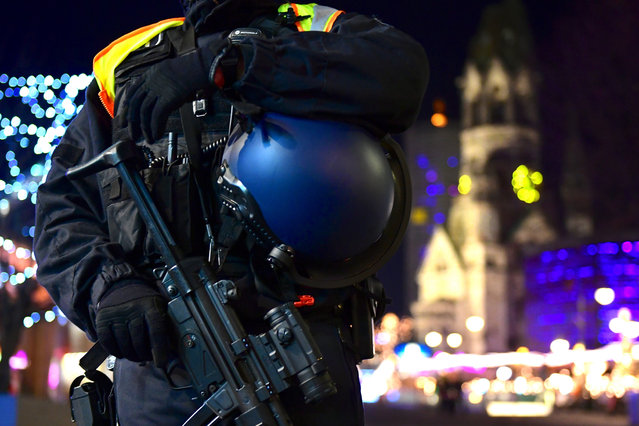 A policeman with a machine gun stands guard in front of the Kaiser-Wilhelm-Gedaechtniskirche memorial church with the Christmas market on Breitscheidplatz square in Berlin, Germany, 21 December 2019. A suspicious object was found and the Christmas market evacuated afterwards. In 2016, the place was the target of a terror attack in which 12 people died. (Photo by Clemens Bilan/EPA/EFE) 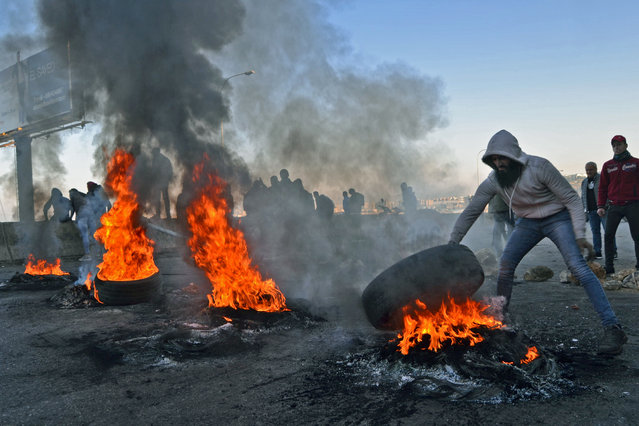 Lebanese protesters block a road in the norther city of Tripoli on December 20, 2019. Protesters blocked roads across crisis-hit Lebanon today to condemn the designation of Hezbollah-backed Hassan Diab as prime minister in a divisive vote that sparked uproar among members of the Sunni community. (Photo by AFP Photo/Stringer) 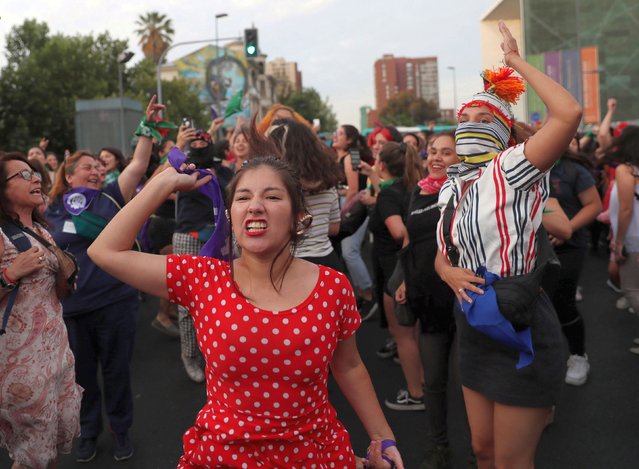 Women gesture during a protest marking the National Day Against Femicide in Santiago, Chile, December 19, 2019. (Photo by Ivan Alvarado/Reuters) 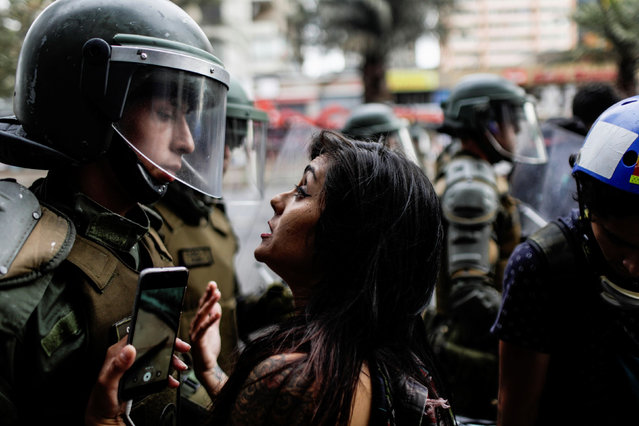 A woman confronts a member of the security forces during a protest against Chile's government in Santiago, Chile on December 19, 2019. (Photo by Ricardo Moraes/Reuters) 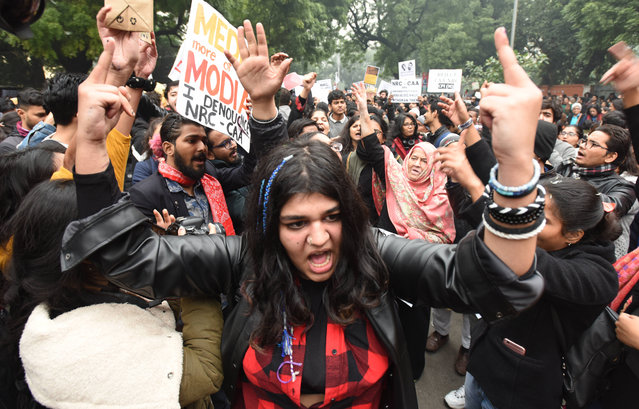 Protesters with posters and placards during a demonstration against the Citizenship Amendment Act (CAA) and National Register of Citizens (NRC) from Mandi house to Jantar Mantar on December 19, 2019 in New Delhi, India. The act seeks to grant Indian citizenship to refugees from Hindu, Christian, Sikh, Buddhist and Parsi communities fleeing religious persecution from Pakistan, Afghanistan, and Bangladesh, and who entered India on or before December 31, 2014. The Parliament had passed the Citizenship (Amendment) Bill, 2019 last week and it became an act after receiving assent from President Ram Nath Kovind. Since then, protests including some violent ones have erupted in various regions of the country, including the North East over the amended citizenship law. (Photo by Raj K Raj/Hindustan Times/Sipa USA) 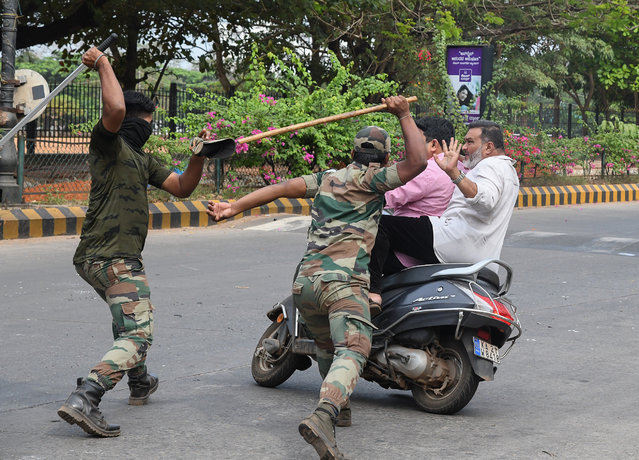 Members of the Karnataka Reserve Police Force swing their sticks to beat two men on a scooter who rode too close to a barricade set up on a street in Mangalore on December 20, 2019, amid heightened security due to protests over India's new citizenship law. Fresh clashes between Indian police and demonstrators erupted on December 20 after more than a week of deadly unrest triggered by a citizenship law seen as anti-Muslim. (Photo by AFP Photo/Stringer) 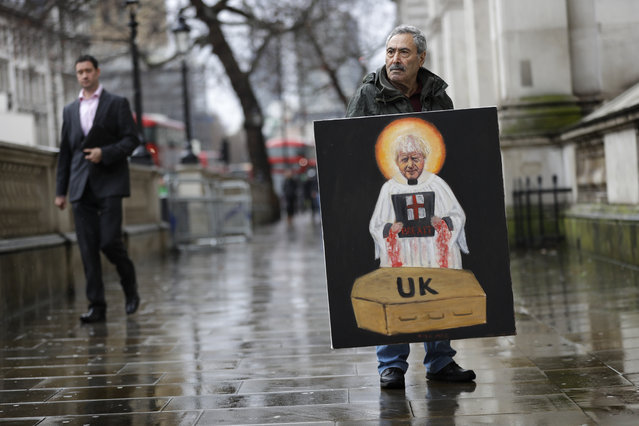 Artist Kaya Mar displays a painting of Britain's Prime Minister Boris Johnson in Westminster in London, Friday, December 20, 2019. British lawmakers are set to hold their first major vote on Prime Minister Boris Johnson's Brexit bill. It is all but certain to be approved by the country's new Conservative-dominated Parliament on Friday. (Photo by Kirsty Wigglesworth/AP Photo) 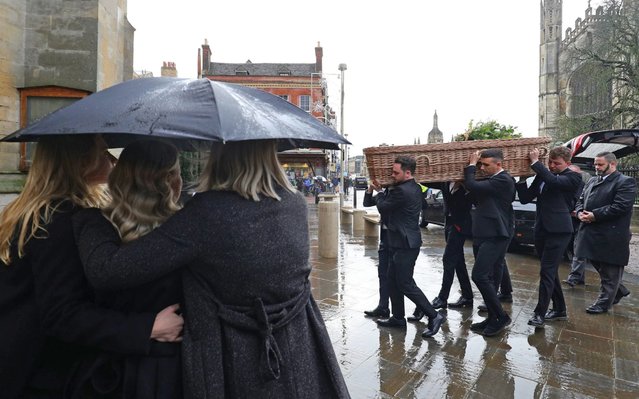 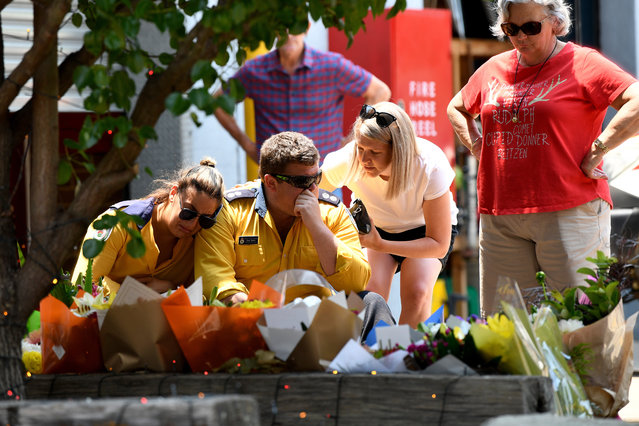 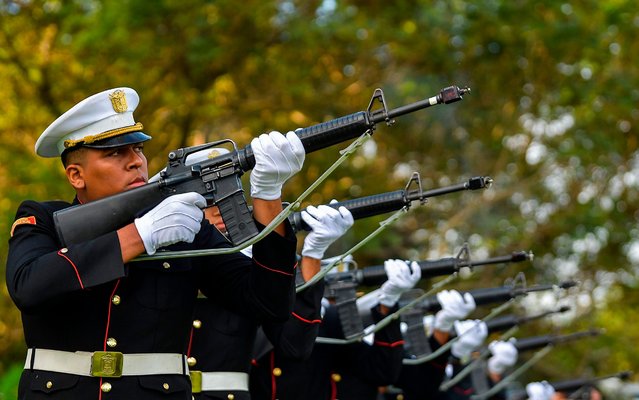 Members of Panama's presidential guard fires into the air during a solemn ceremony commemorating the 30th anniversary of US military invasion at the Jardin de la Paz cemetery in Panama City, on December 20, 2019. Al least five hundred people died and over 2,000 were injured during the invasion aimed to oust Panama's General Manuel Antonio Noriega from power and take him to the US to be tried on drug charges. (Photo by Luis Acosta/AFP Photo) 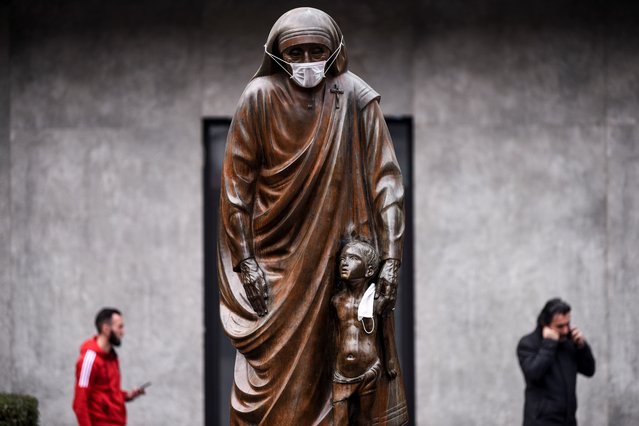 A face mask is placed on the statue of Saint Teresa in Pristina on December 19, 2019. Pristina and many other cities across Kosovo experienced high levels of visible air pollution. Over the past months Pristina was listed as one of the cities suffering from the worst air quality in the world. (Photo by Armend Nimani/AFP Photo) 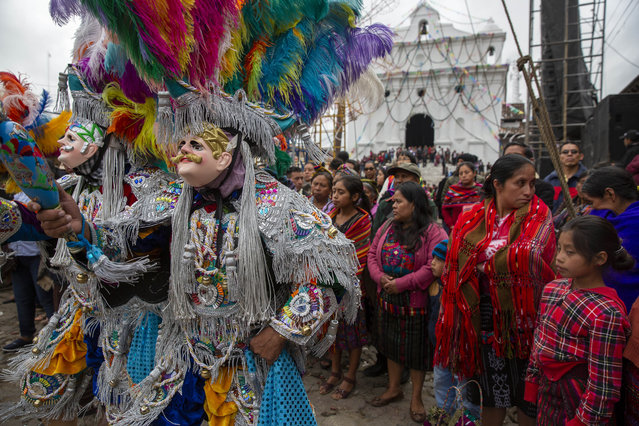