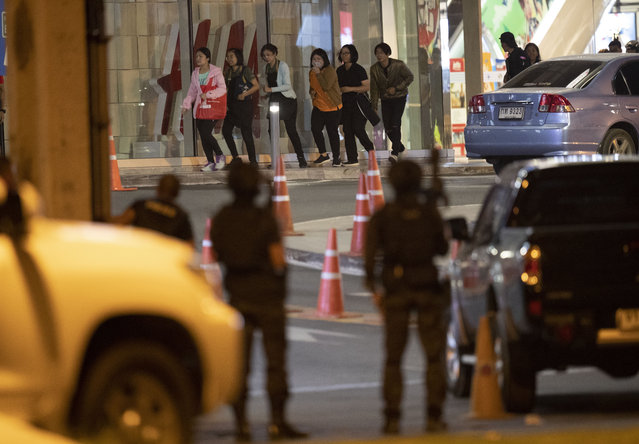 People who were able to get out of Terminal 21 Korat mall walk outside the building in Nakhon Ratchasima, Thailand on Sunday, February 9, 2020. A soldier who holed up in a popular shopping mall in northeastern Thailand shot multiple people on Saturday, killing at least 20 and injuring 31 others, officials said. (Photo by Sakchai Lalitkanjanakul/AP Photo) 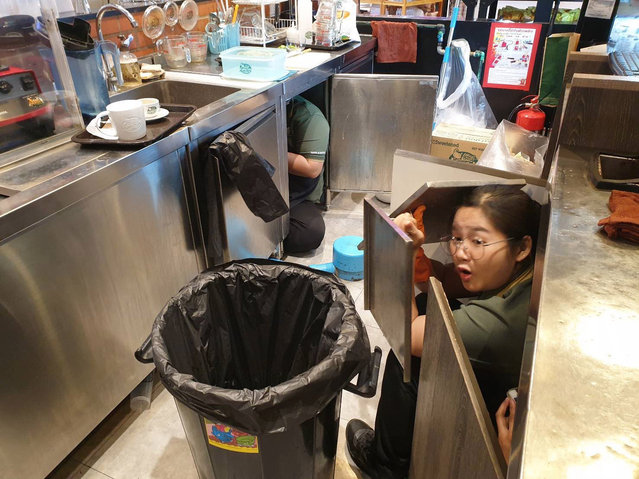 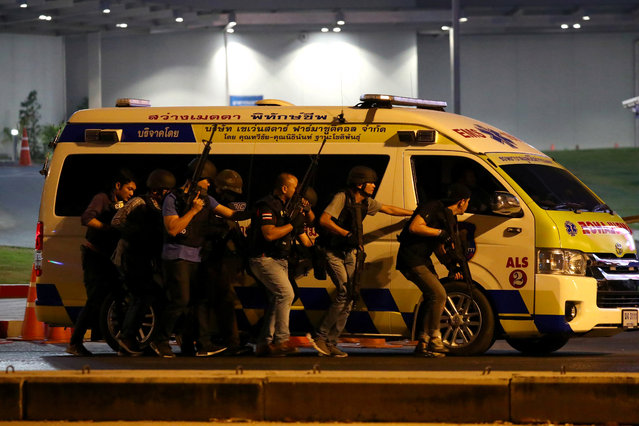 Thai security forces take cover behind an ambulance as they chase a shooter hidden in a shopping mall after a mass shooting in front of the Terminal 21, in Nakhon Ratchasima, Thailand on February 9, 2020. (Photo by Athit Perawongmetha/Reuters) 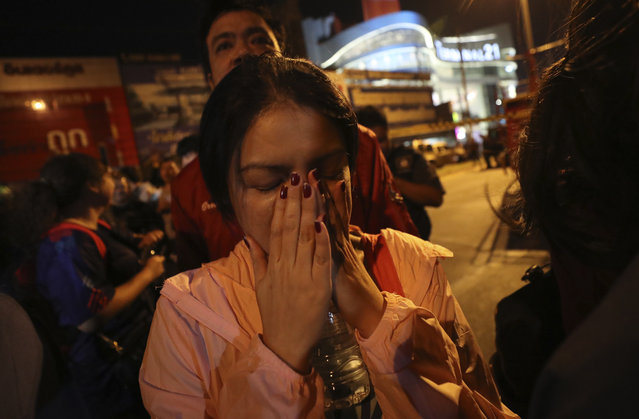 A woman who was able to get out of Terminal 21 Korat mall gestures with her hands on her face in Nakhon Ratchasima, Thailand on Sunday, February 9, 2020. (Photo by Sakchai Lalitkanjanakul/AP Photo) 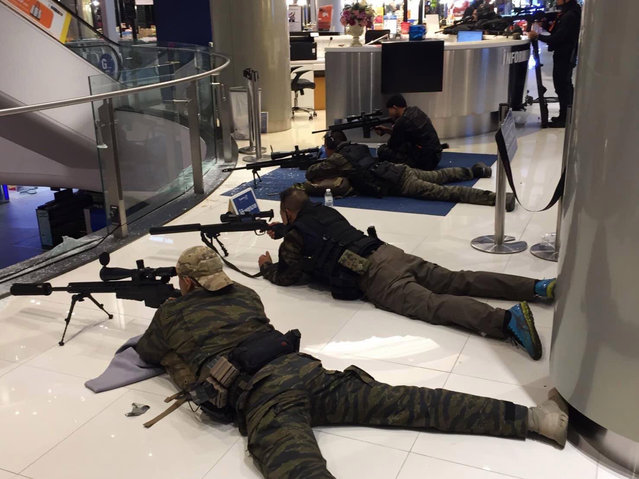 Snipers were called to the scene of the mass shooting in Nakhon Ratchasima, Thailand on Sunday, February 9, 2020. (Photo by Viral Press/The Sun) 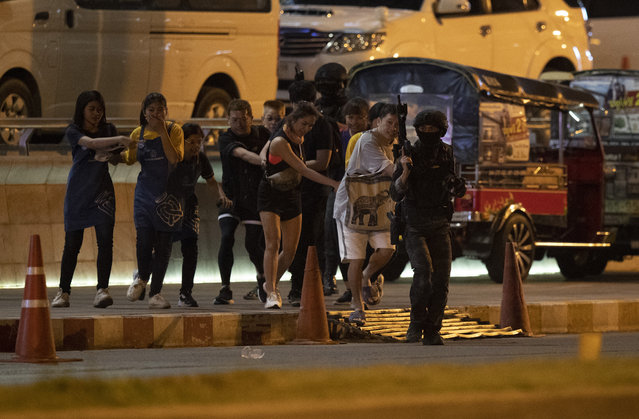 People who were able to get out of Terminal 21 Korat mall, are escorted outside by armed commando soldiers in Nakhon Ratchasima, Thailand on Sunday, February 9, 2020. (Photo by Sakchai Lalitkanjanakul/AP Photo) 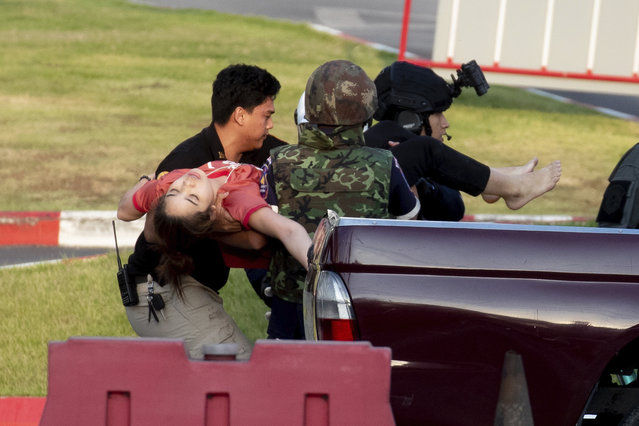 Armed commando soldiers carry a person out of Terminal 21 Korat mall in Nakhon Ratchasima, Thailand, Sunday, February 9, 2020. A gunman described as a soldier angry over a financial dispute killed a few people and then went on a far bloodier rampage Saturday in northeastern Thailand, shooting as he drove to the busy mall where shoppers fled in terror. Multiple people were killed in all, more people were injured. (Photo by Wason Wanichakorn/AP Photo) 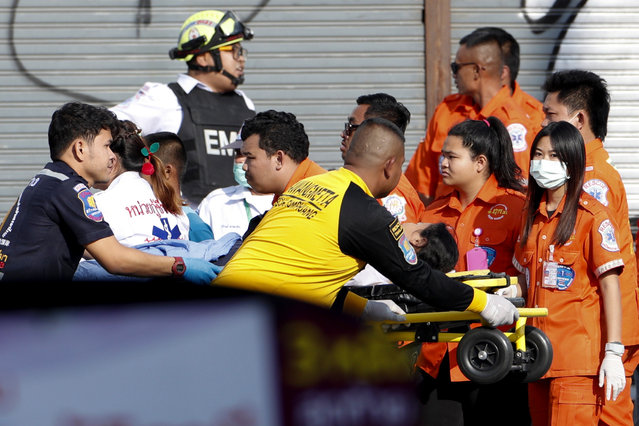 Medics transport a victim on a stretcher at the scene of a mass shooting at the Terminal 21 shopping mall in Nakhon Ratchasima, Thailand, 09 February 2020. (Photo by Rungroj Yongrit/EPA/EFE) 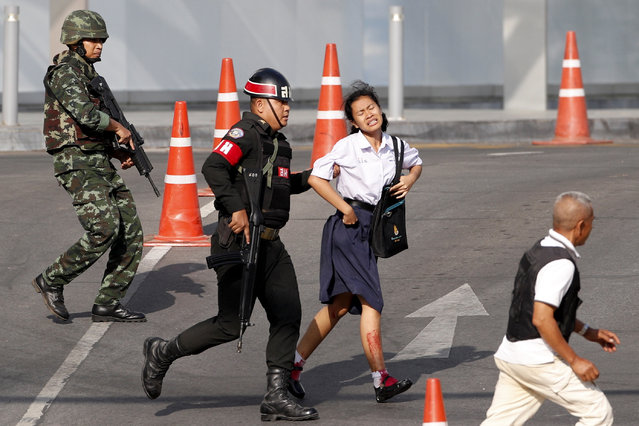 Soldiers evacuate a hostage from a mass shooting scene at the Terminal 21 shopping mall in Nakhon Ratchasima, Thailand, 09 February 2020. According to media reports, at least 21 people were killed, and as many as 30 wounded after a Thai soldier, identified as 32-year-old Jakraphanth Thomma, went on a shooting rampage with a M60 machine gun in the city of Nakhon Ratchasima, also known as Korat. Thomma held an unknown number of people hostage within the Terminal 21 shopping mall for around 17 hours before being shot and killed in a police operation. (Photo by Rungroj Yongrit/EPA/EFE) 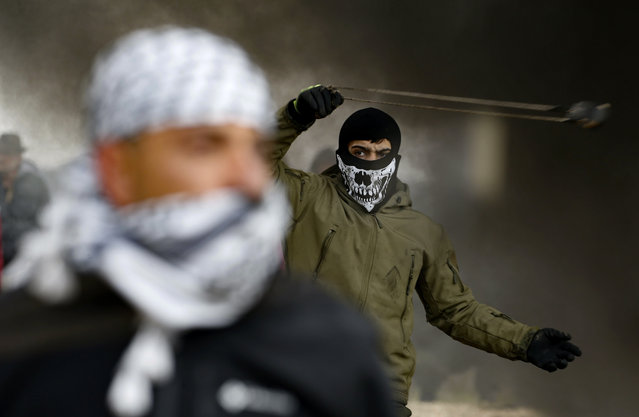 A Palestinian protester uses a slingshot during a demonstration against a US-brokered peace proposal, in the occupied West Bank village of Bilin near Ramallah on February 7, 2020. Israel deployed additional forces in Jerusalem and the occupied West Bank ahead of weekly Muslim Friday prayers, a day after a deadly uptick in violence. The rise in violence comes a week after US President Donald Trump released a long-delayed plan for the Middle East that angered the Palestinians. (Photo by Abbas Momani/AFP Photo) 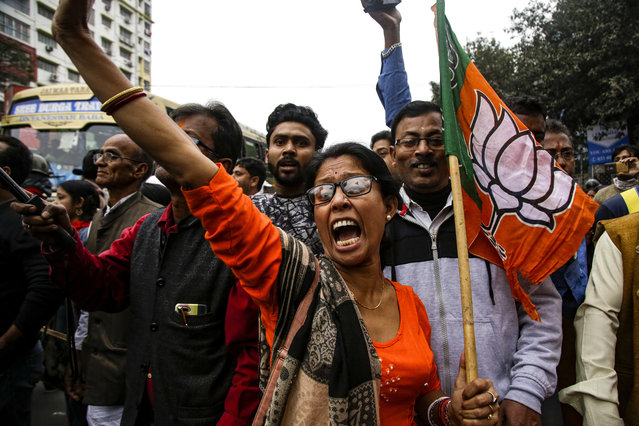 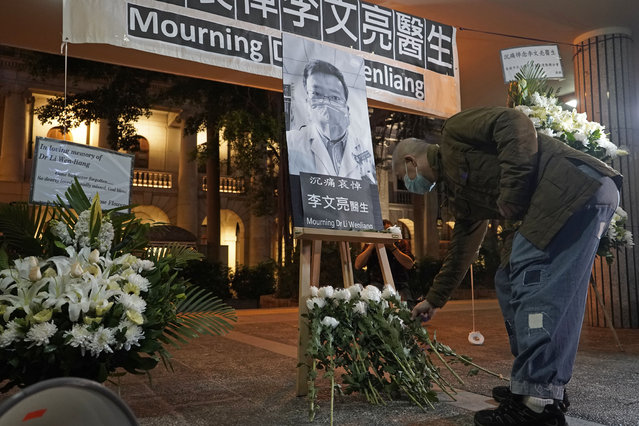 A man wearing mask, attends a vigil for Chinese doctor Li Wenliang, in Hong Kong, Friday, February 7, 2020. The death of a young doctor who was reprimanded for warning about China's new virus triggered an outpouring Friday of praise for him and fury that communist authorities put politics above public safety. (Photo by Kin Cheung/AP Photo) 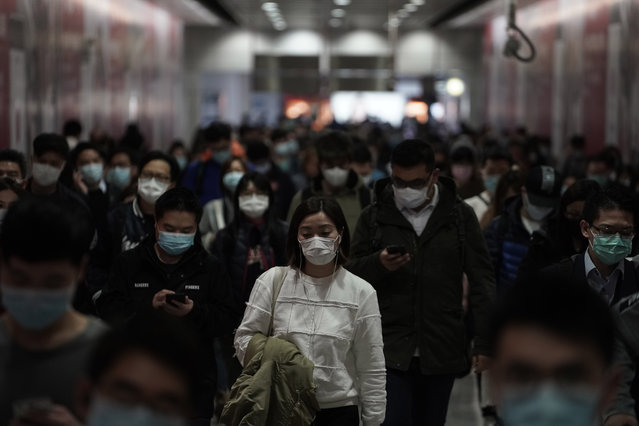 People wearing masks, walk in a subway station, in Hong Kong, Friday, February 7, 2020. Hong Kong on Friday confirmed 25 cases of a new virus that originated in the Chinese province of Hubei. According to the latest figures, 233 new cases of the novel coronavirus have been confirmed globally, Hong Kong's Chief Secretary for Admissions told a news conference. (Photo by Kin Cheung/AP Photo) 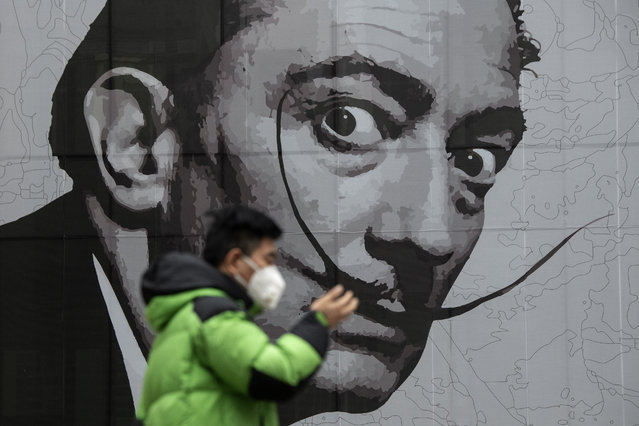 A man wearing a protective facemask walks in a shopping mall in Shanghai on February 7, 2020. The official Chinese death toll from the coronavirus outbreak rose to 636, with the government saying total infections had climbed past 30,000. (Photo by Noel Celis/AFP Photo) 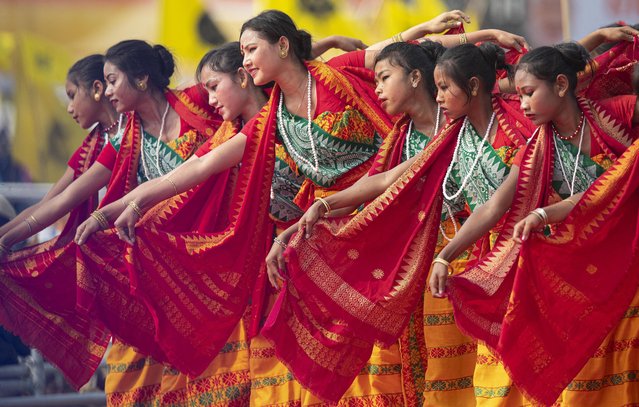 Indian Bodo tribal girls dance at an event to celebrate signing of a peace accord with the Bodo rebel group, National Democratic Front of Bodoland, in Kokrajhar, a town 250 kilometers (150 miles) west of Gauhati, India, Friday, February 7, 2020. Modi said on Friday that his government will continue its peace push in insurgency-wracked northeast bordering China and Myanmar where signing of accords with key rebel groups led to surrender by thousands of fighters. The prime minister said decades of violent insurrection ended in the Bodo tribal heartland in Assam state following the signing of the Jan. 27 agreement by the government with the rebel group. (Photo by Anupam Nath/AP Photo) 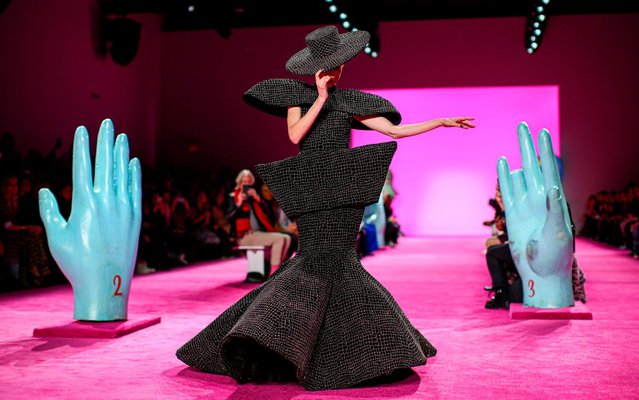 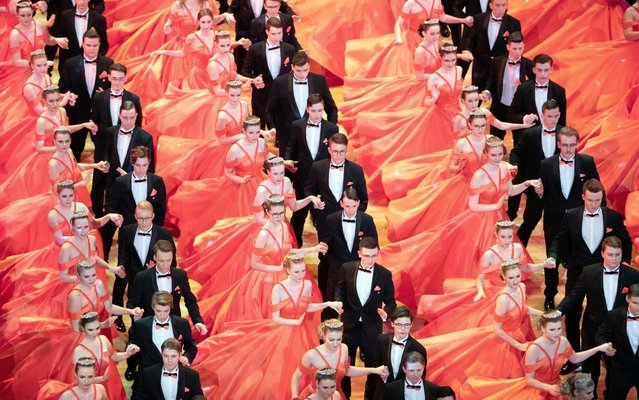 Debutant couples dance on the stage in the “Semper” opera house during the dress rehearsal for the 15th “Semperopernball” in Dresden, Germany on February 7, 2020. (Photo by Sebastian Kahnert/dpa via AP Photo) 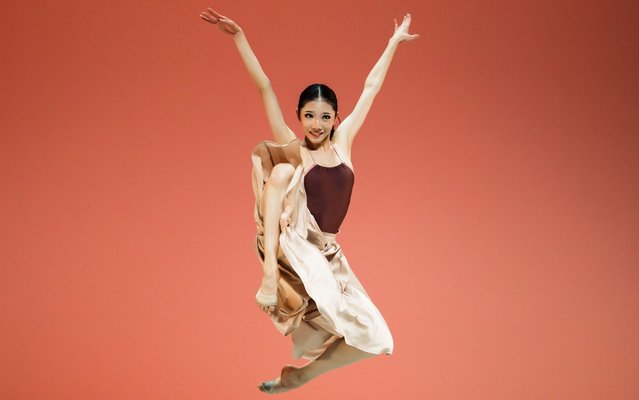 Zeyu Wang from China performs her contemporary variation during the final of the 48th Prix de Lausanne in Montreux, Switzerland, 08 February 2020. Launched in 1973, the Prix de Lausanne is an international dance competition for young dancers aged 15 to 18. Closing the six-day event, scholarships granting free tuition in a world-renowned dance school or dance company are awarded to the best dancers out of 77 participants this year. (Photo by Valentin Flauraud/EPA/EFE/Rex Features/Shutterstock)
Edit Del
10 Feb 2020 10:30:00, post received 0 comments
Publication archive:
←   →
Popular tags:
All tags
Last searches: