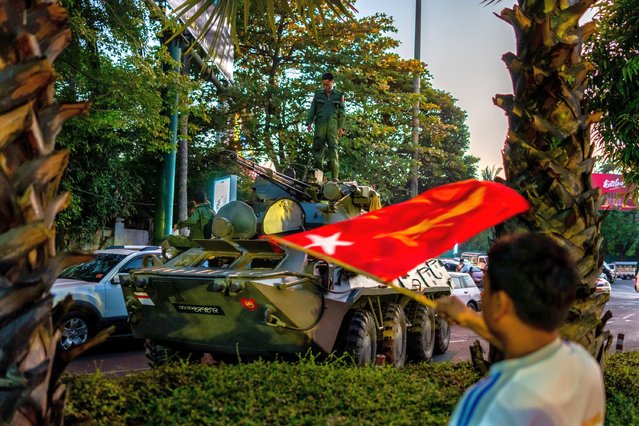 A man waves a red National League For Democracy (NLD) flag near a broken-down military armored vehicle on February 14, 2021 in Yangon, Myanmar. The U.S. Embassy in Myanmar told Americans in Myanmar to “shelter in place” in an announcement after military movements and reports of possible interruptions to telecoms. Armored vehicles were seen on the streets of Myanmar's capital, and telecoms companies said they had been ordered to suspend services between 1 AM and 9 AM on Monday. (Photo by Hkun Lat/Getty Images) 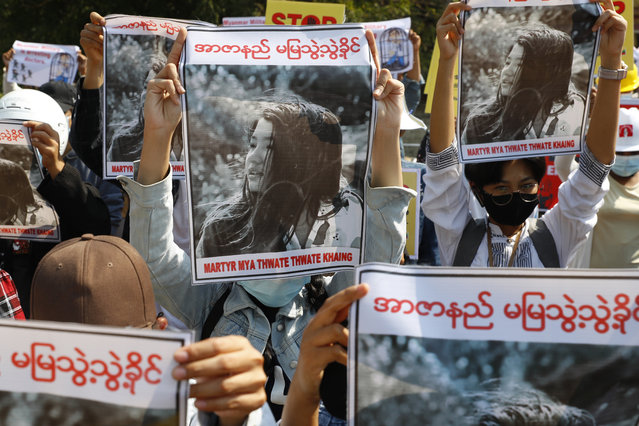 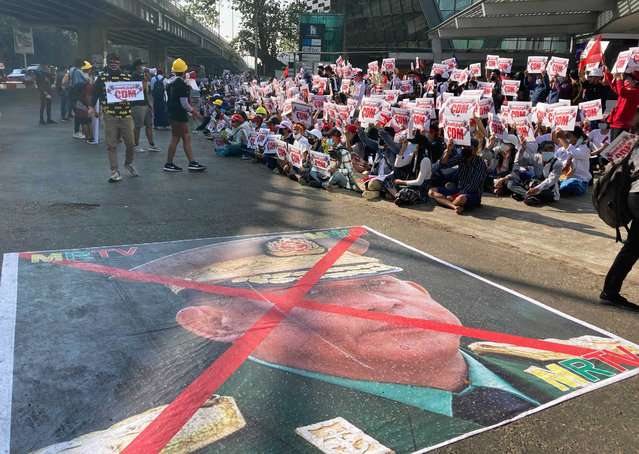 A large image that has an X mark on the face of Commander in chief Senior General Min Aung Hlaing, also Chairman of the State Administrative Council, lies on the road as anti-coup protesters gather outside the Hledan Centre in Yangon, Myanmar, Sunday, February 14, 2021. Daily mass street demonstrations in Myanmar are on their second week, with neither protesters nor the military government they seek to unseat showing any signs of backing down from confrontations. (Photo by AP Photo/Stringer) 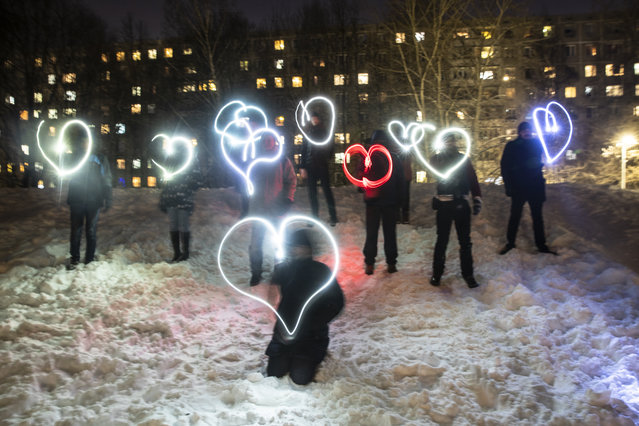 People draw hearts with their cellphones flashlights in support of jailed opposition leader Alexei Navalny and his wife Yulia Navalnaya Moscow, Russia, Sunday, February 14, 2021. When the team of jailed Russia opposition leader Alexei Navalny announced a protest in a new format, urging people to come out to their residential courtyards on Sunday and shine their cellphone flashlights, many responded with jokes and skepticism. After two weekends of nationwide demonstrations, the new protest format looked to some like a retreat. But not to Russian authorities, who moved vigorously to extinguish the illuminated protests planned for Sunday. (Photo by Pavel Golovkin/AP Photo) 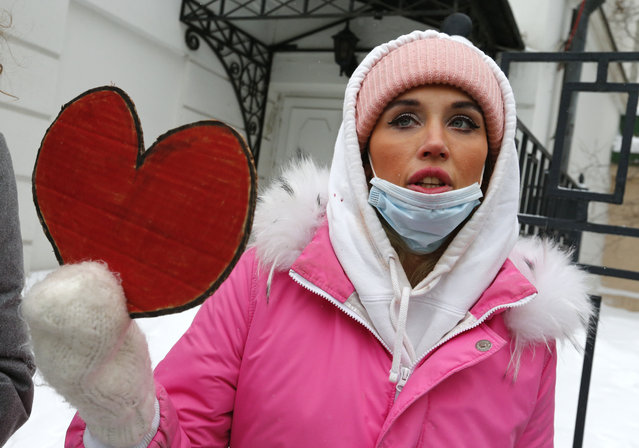 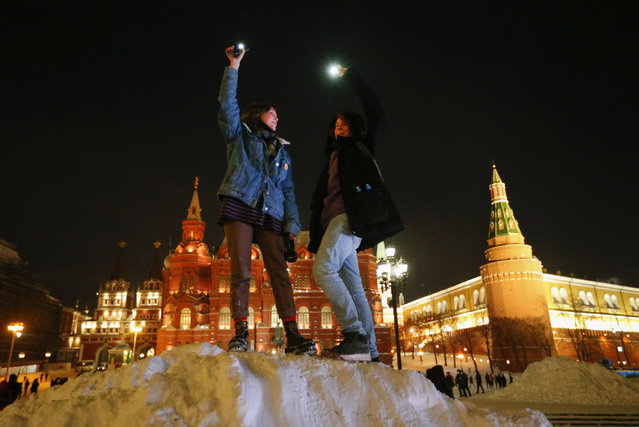 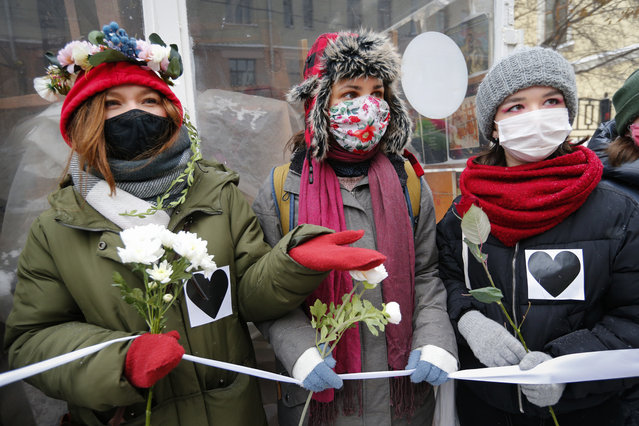 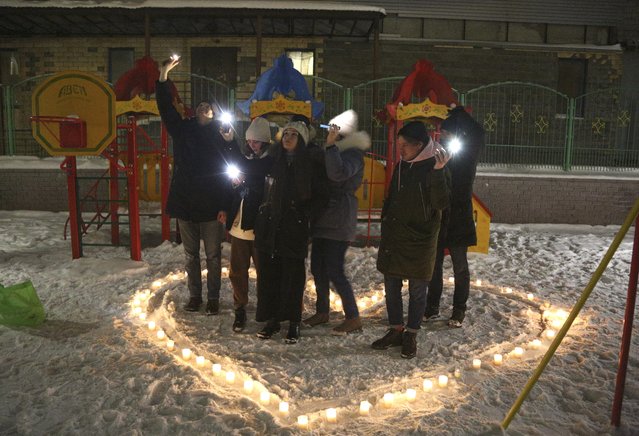 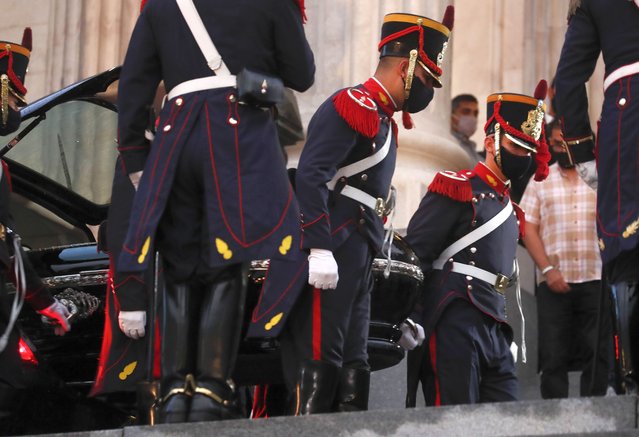 An honor guard brings the coffin with the remains of former President Carlos Menem for his wake at Congress in Buenos Aires, Argentina. Sunday, February 14, 2021. Menem, who had been ailing in recent weeks has died Sunday. (Photo by Natacha Pisarenko/AP Photo) 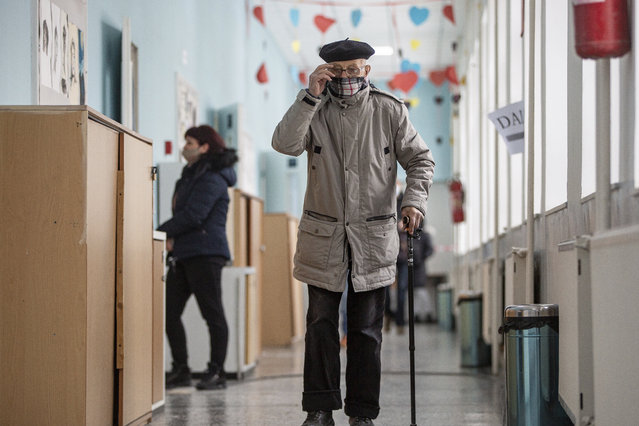 An old man arrives at the polling station to cast his ballot in parliamentary elections in capital Pristina, Kosovo on Sunday, February 14, 2021. Kosovo is holding an early parliamentary election to form a new government amid the coronavirus pandemic, an economic downturn and stalled negotiations with wartime foe Serbia. Some 1.8 million eligible voters on Sunday started to cast their ballots in 2,400 polling stations. They're electing 120 lawmakers among more than 1,000 candidates from 28 political groupings. (Photo by Visar Kryeziu/AP Photo) 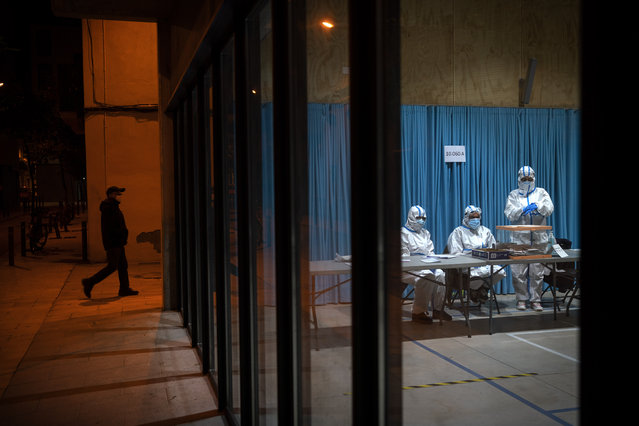 Electoral workers wearing protective suits as a precaution against coronavirus outbreak, wait for people voting at a polling station during the Catalan regional election in Barcelona, Spain, Sunday, February 14, 2021. The reduce polls contagion risk, Catalan authorities recommended that voters who are either infected or quarantined due to recent contact with an infected person to vote from 7:00-8:00 p.m., when polls close. Poll workers were provided with protection suits — gloves, body covering, face mask and face shield — for use during that final hour. (Photo by Emilio Morenatti/AP Photo) 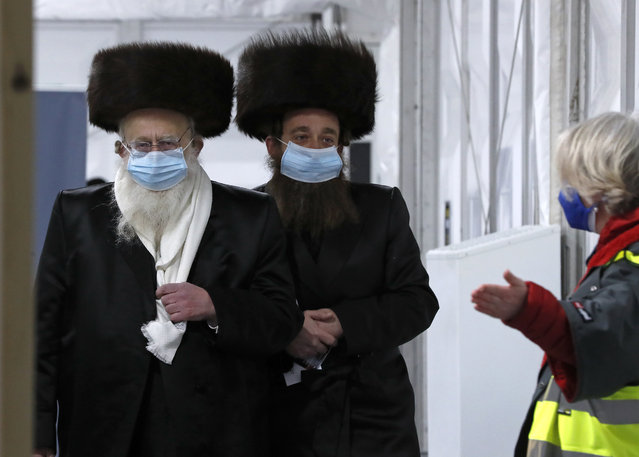 Two men from the Haredi Orthodox Jewish community arrive at an event to encourage vaccine uptake in the ultra-Orthodox community at the John Scott Vaccination Centre in London, Saturday, February 13, 2021. In hopes of breaking down barriers that sometimes isolate the Orthodox from wider society, community leaders organized the pop-up vaccination event for Saturday night to coincide with the end of Shabbat, the Jewish day of rest. (Photo by Frank Augstein/AP Photo) 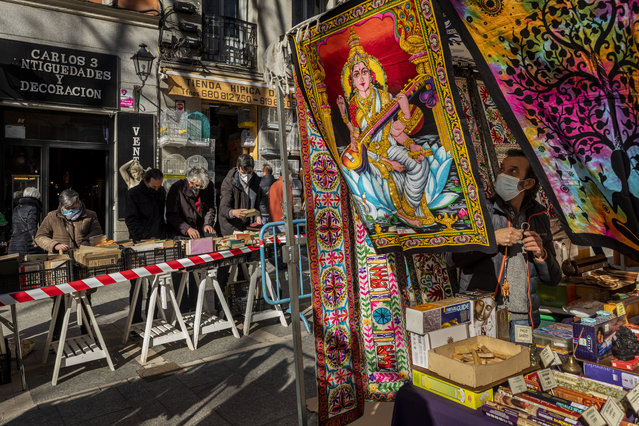 Potential customers check old books at a stall in the Rastro flea market in Madrid, Spain, Sunday, February 14, 2021. Spain's Health Ministry said Friday that the country had now passed the 1-million mark for the number of people who have received the complete two-dose vaccine. Spain has administered 2.4 million doses overall. It hopes to have 70% of its 47 million population vaccinated before September. (Photo by Bernat Armangue/AP Photo) 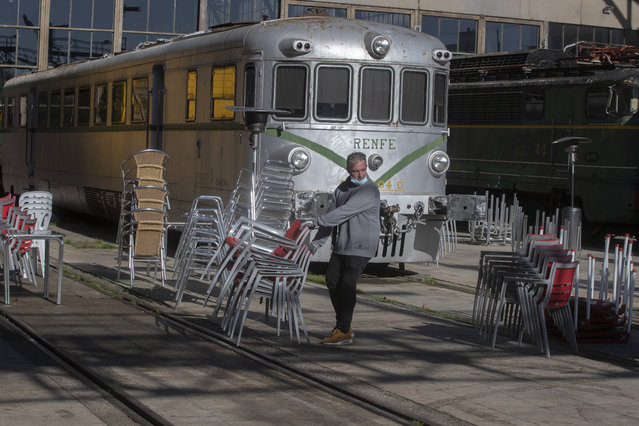 A bar worker sets out tables and chairs in a terrace bar outside an old train station which is currently a railway museum, in Madrid, Spain, Sunday, February 14, 2021. Several central Spanish regions including Madrid have announced some easing of curfews and restrictions on bar and restaurants despite warnings to keep a high alert despite a slowing curve of the Coronavirus contagion. (Photo by Paul White/AP Photo) 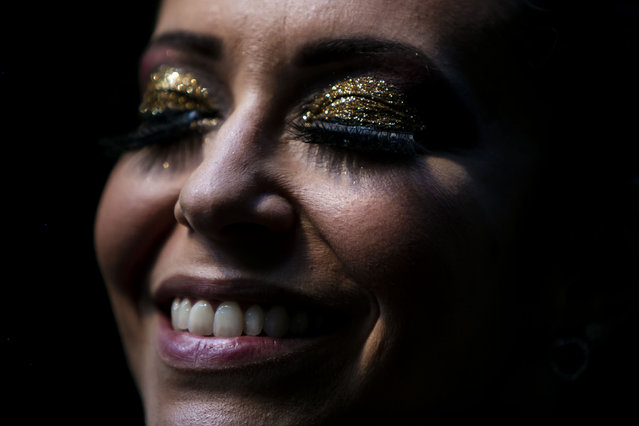 A member of the “Desliga da Justica” street band gets dressed in her costume in Rio de Janeiro, Brazil, Sunday, February 14, 2021. The group's performance was broadcast live on social media for those who were unable to participate in the carnival due to COVID restrictions after the city's government officially suspended Carnival and banned street parades or clandestine parties. (Photo by Bruna Prado/AP Photo) 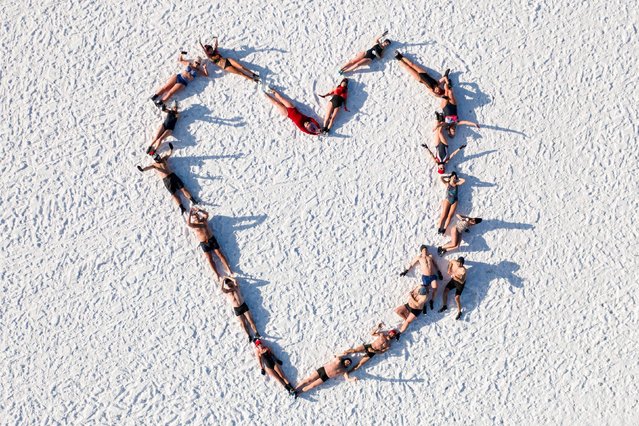 Lovers of winter swimming draw a heart as they pose lying on the icy beach after swimming in the icy water of the Baltic sea in Gdansk, Poland on February 14, 2021, on the occasion of the Valentine's day. (Photo by Mateusz Slodkowski/AFP Photo) 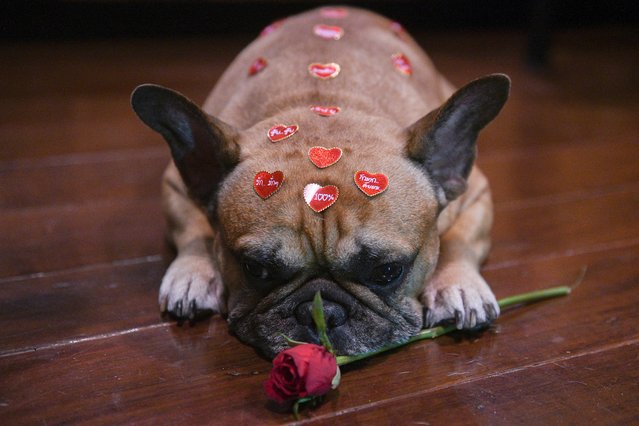 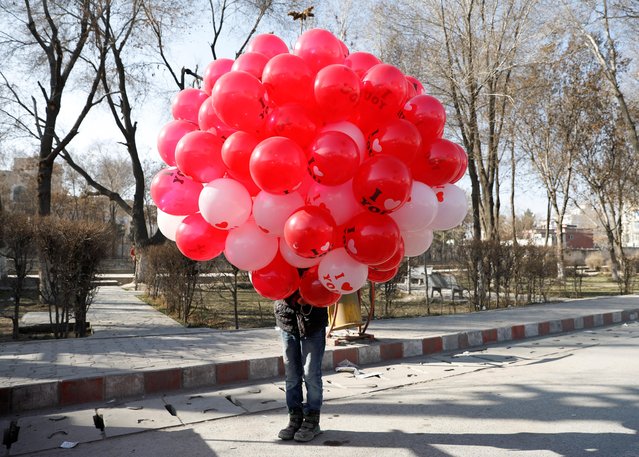 An Afghan boy holds balloons for sale during a Valentine's Day celebration in Kabul, Afghanistan on February 14, 2021. (Photo by Mohammad Ismail/Reuters) 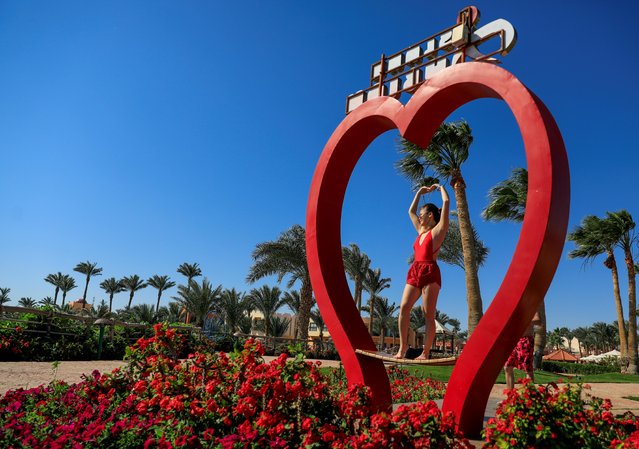 A tourist poses for a photo with a heart-shaped decoration on Valentine's Day at Nubian Village hotel in the Red Sea resort of Sharm el-Sheikh, Egypt on February 14, 2021. (Photo by Amr Abdallah Dalsh/Reuters) 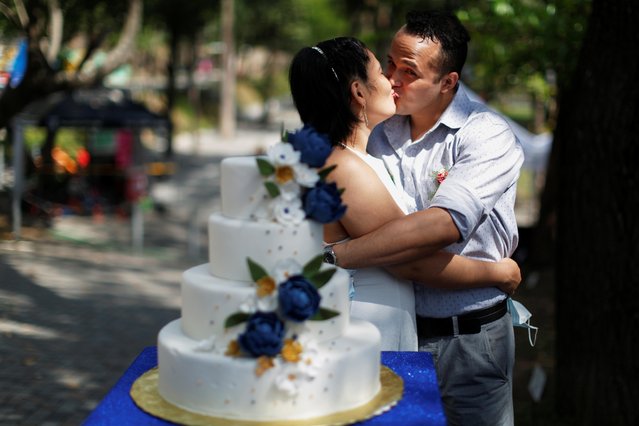 A newly-wed couple kisses after a collective wedding ceremony celebrated by the municipality, as the coronavirus disease (COVID-19) outbreak continues on Valentine's Day, in San Salvador, El Salvador on February 14, 2021. (Photo by Jose Cabezas/Reuters) 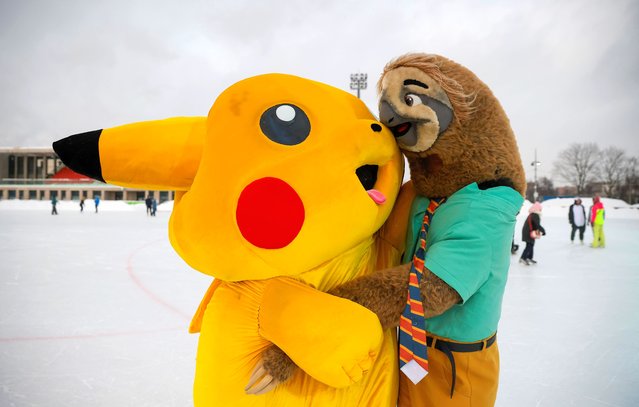 People dressed in costumes of Pokemon's Pikachu and Zootopia's sloth hug each other during a carnival devoted to St. Valentine's Day in Moscow, Russia on February 14, 2021. (Photo by Maxim Shemetov/Reuters) 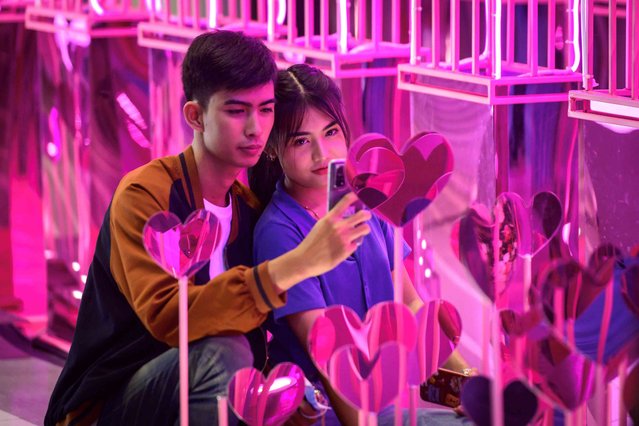