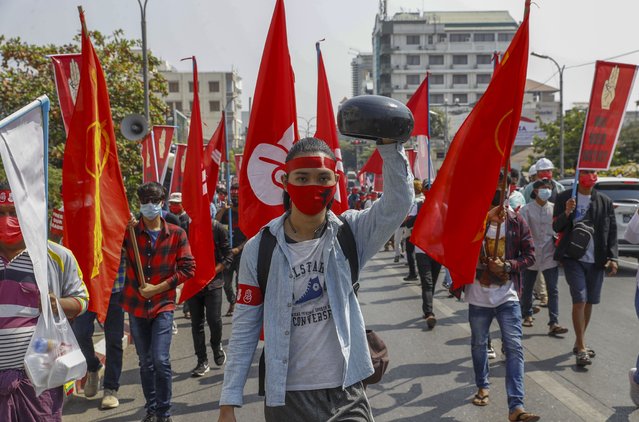 A demonstrator displays an upside-down begging-bowl, a form of protest symbolizing refusal to receive any kind of alms from the military government during a protest against the military coup in Mandalay, Myanmar on Tuesday, February 16, 2021. Security forces in Myanmar pointed guns toward anti-coup protesters and attacked them with sticks Monday, seeking to quell the large-scale demonstrations calling for the military junta that seized power this month to reinstate the elected government. (Photo by AP Photo/Stringer) 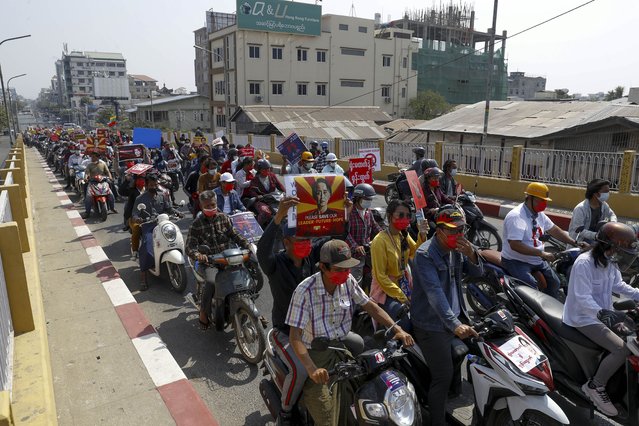 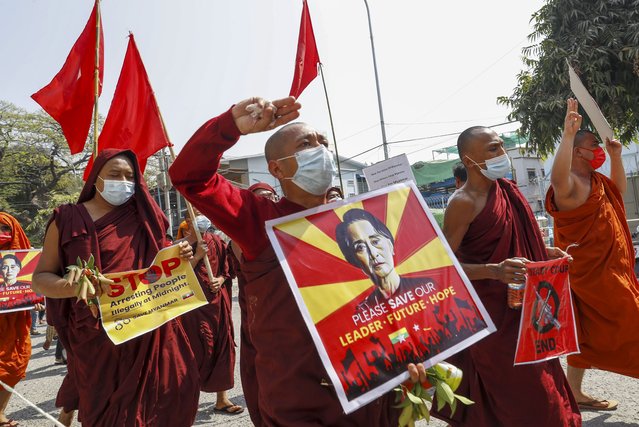 Buddhist monks and nuns display pictures of detained Myanmar leader Aung San Suu Kyi during a protest against the military coup in Mandalay, Myanmar on Tuesday, February 16, 2021. Peaceful demonstrations against Myanmar’s military takeover resumed Tuesday, following violence against protesters a day earlier by security forces and after internet access was blocked for a second straight night. (Photo by AP Photo/Stringer) 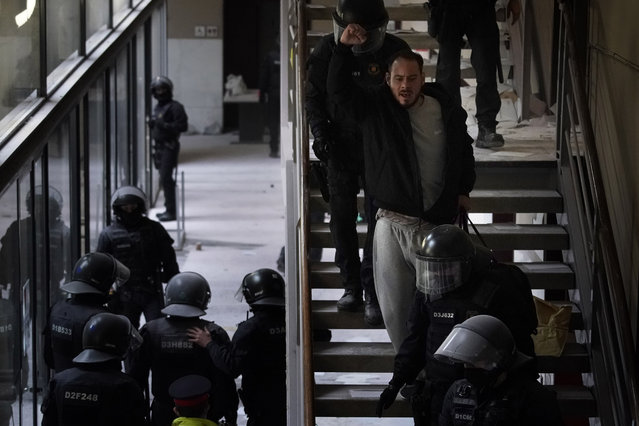 Rap singer Pablo Hasél is detained by police officers at the University of Lleida, Spain, Tuesday, February 16, 2021. A 24-hour standoff between police and a rapper barricaded with dozens of his supporters in a university ended with the arrest of the artist, who has been sentenced to 9 months in prison for insulting the monarchy and praising terrorism. (Photo by Joan Mateu/AP Photo) 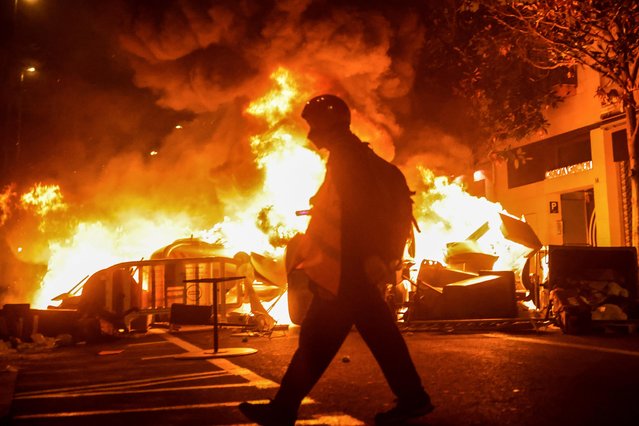 A person walks in front of fire during a protest in support of Catalan rapper Pablo Hasel in Barcelona, Spain, February 16, 2021. Thousands of protesters took over some of Barcelona's streets to demand the release of the rapper arrested by Spanish police after being given a jail sentence on charges of glorifying terrorism and insulting royalty in his songs. (Photo by Nacho Doce/Reuters) 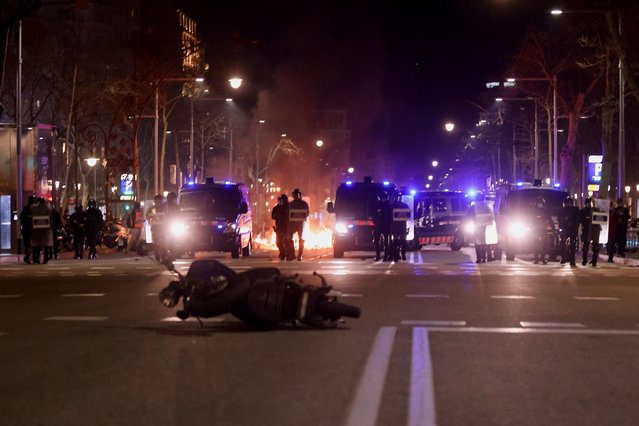 A motorcycle lies on the street in front of Mossos d'Esquadra police officers during a protest in support of Pablo Hasel in Barcelona, Spain, February 16, 2021. Dozens of police stormed Lleida university in northeastern Spain earlier in the day and arrested Hasel after he had barricaded himself there. Hasel, known for his radical leftist views, missed a deadline last Friday to surrender to police to serve a nine-month jail term handed down in 2018 – a sentence that caused an uproar in Spain and led the government to announce it would make free speech laws less restrictive. (Photo by Nacho Doce/Reuters) 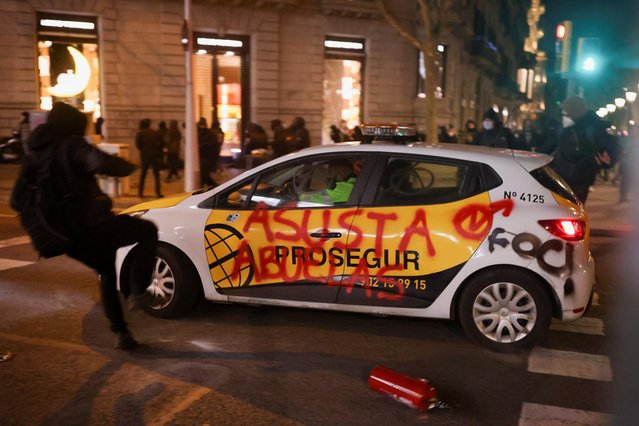 A car with a graffiti on it drives amidst a protest in support of Pablo Hasel in Barcelona, Spain, February 16, 2021. Hasel was convicted over lyrics and tweets that included references to the Basque separatist paramilitary group ETA, compared Spanish judges to Nazis and called former king Juan Carlos a mafia boss. (Photo by Nacho Doce/Reuters) 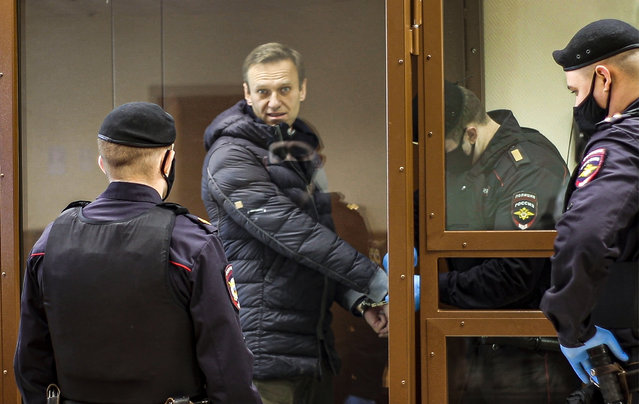 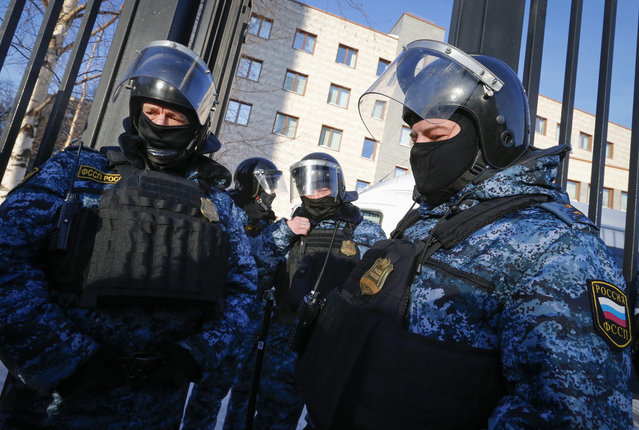 Russian Federal Bailiffs service officers stand guard at the Babushkinsky district court prior to the start of the trial against Russian opposition leader Alexey Navalny in Moscow, Russia, Tuesday, February 16, 2021. Moscow court continue the trial against Russian opposition leader Alexey Navalny on the charges of defamation. Navalny was accused of slandering a World War II veteran featured in the video promoting the constitutional reform allowing to extend President Vladimir Putin's rule. The politician slammed people in the video as “traitors” and stands trial on defamation charges. (Photo by Alexander Zemlianichenko/AP Photo) 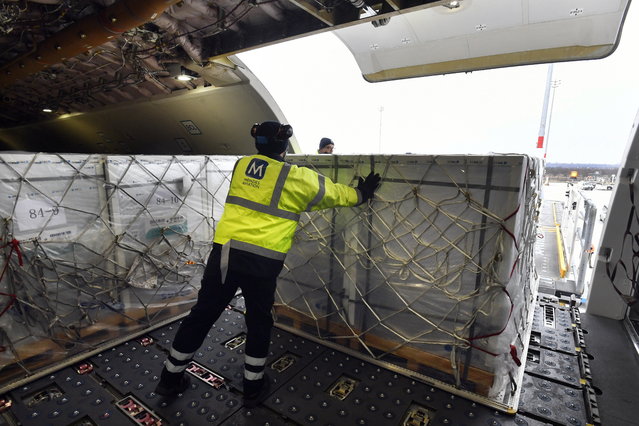 A box containing vaccines is unloaded from a Hungarian Airbus 330 cargo plane as the first batch of the vaccine against the new coronavirus produced by Sinopharm of China arrives at Budapest Liszt Ferenc International Airport in Budapest, Hungary, Tuesday, February 16, 2021. The vaccine will not be used without its examination and approval by the National Public Health Center of Hungary. (Photo by Zoltan Mathe/MTI via AP Photo) 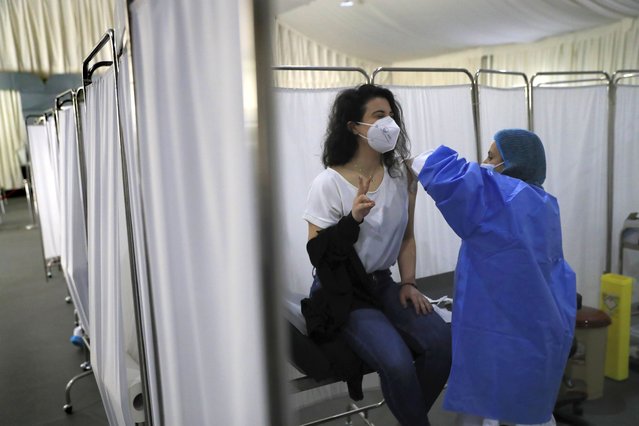 A woman flashes a victory sign as she receives the Pfizer-BioNTech COVID-19 vaccine during a nationwide vaccination campaign, at the Saint George Hospital, in Beirut, Lebanon, Tuesday, February 16, 2021. Lebanon launched its inoculation campaign after receiving the first batch of the vaccine – 28,500 doses from Brussels with more expected to arrive in the coming weeks. (Photo by Hussein Malla/AP Photo) 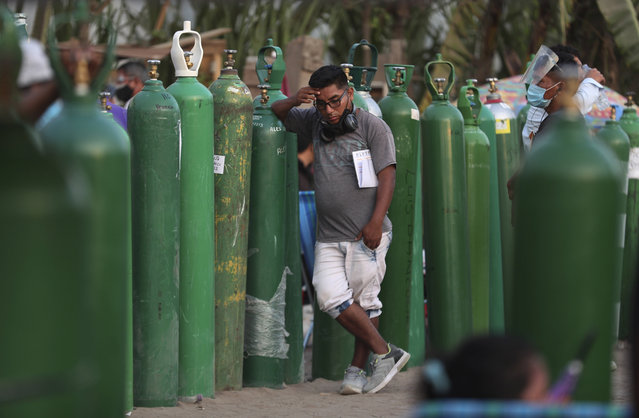 Juan Abanto rests next to his empty oxygen tank as he waits for a refill at a shop that has already closed for the day and will open again tomorrow, in the poor area of Villa El Salvador, in Lima, Peru, Monday, February 15, 2021, amid the COVID-19 pandemic. Some of the people in line said they have been waiting for two days for refills and are now staying for a third day in an attempt to procure oxygen for their sick relatives. (Photo by Martin Mejia/AP Photo) 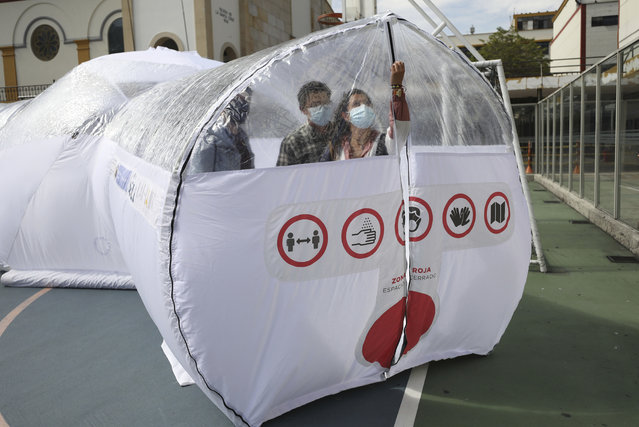 Designers stand inside one of their Portable Epidemiological Insulation Unit during a media presentation, in Bogota, Colombia, Tuesday, February 16, 2021. Colombia’s La Salle University school of architecture designed the small polyhedral pneumatic geodesic domes which can be used to isolate and treat COVID-19 patients in areas where there are no nearby hospitals or where existing hospitals are overwhelmed with patients. (Photo by Fernando Vergara/AP Photo) 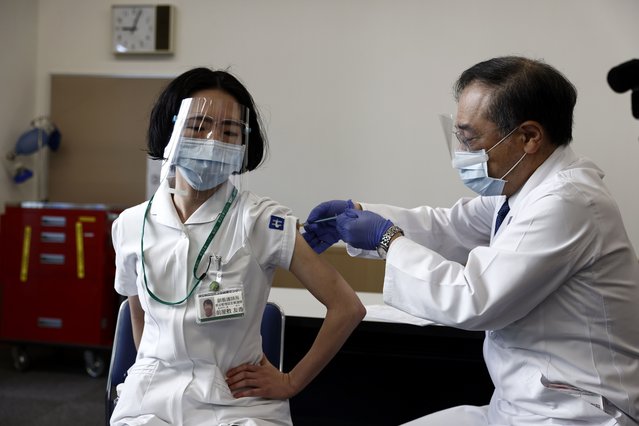 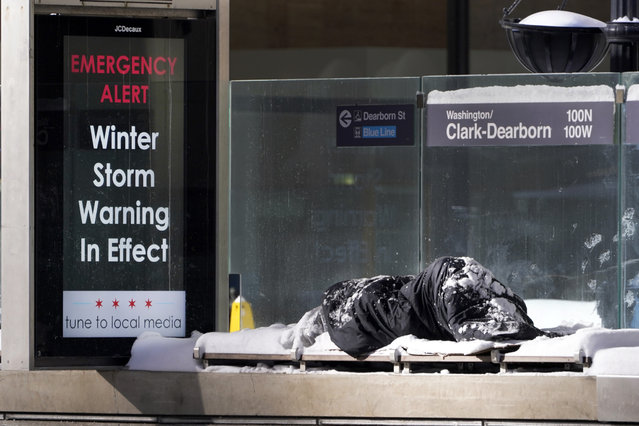 A homeless man Tuesday, February 16, 2021, sleeps at the Chicago Transit Authority's Clark & Dearborn bus station, the morning after a snowstorm dumped up to 18 inches in the greater Chicago area. (Photo by Charles Rex Arbogast/AP Photo) 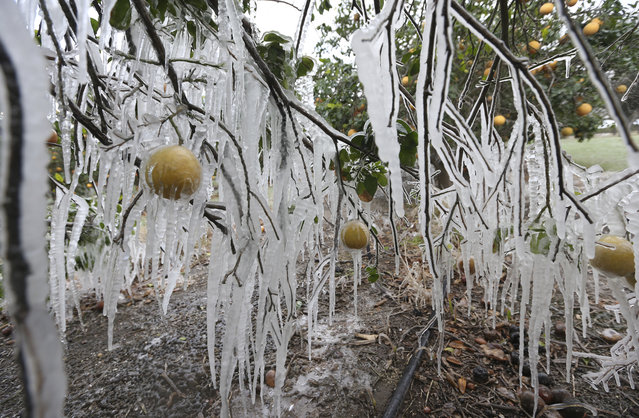 Icicles form on a citrus tree from a sprinkler system used to protect the trees from the freezing temperatures on Monday, February 15, 2021 in Edinburg, Texas. A sprawling blast of winter weather across the U.S. plunged Texas into an unusually snowy emergency Monday that knocked out power for more than 2 million people, shut down grocery stores and air travel and closed schools ahead of frigid days still to come. (Photo by Delcia Lopez/The Monitor via AP Photo) 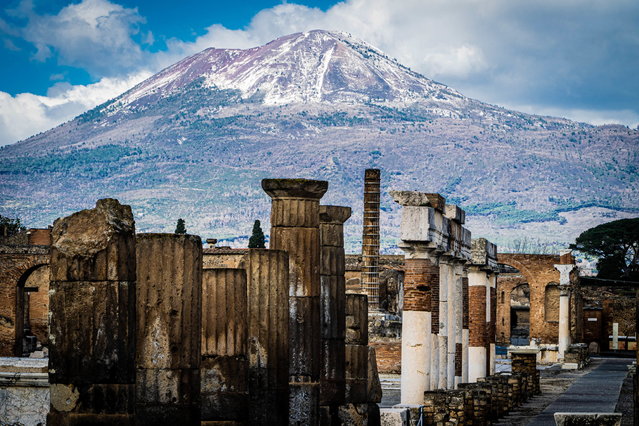 The snow-covered peak of Mount Vesuvius volcano is seen from the streets of the archaeological site in Pompeii, near Naples, southern Italy, 15 February 2021. Snow and icy winds continued to whip Italy on 15 February with wintry weather that has been brought to the region by a Siberian cold front. (Photo by Cesare Abbate/EPA/EFE) 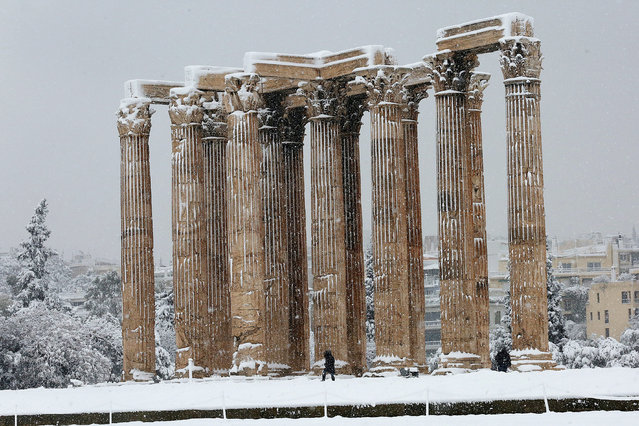 Employees make their way in the archaeological site of the Temple of Zeus during heavy snowfall, in Athens, Greece, 16 February 2021. As the cold front Medea sweeping over Greece was in full progress and heading south, very low temperatures were recorded in the northern parts of the country. (Photo by Orestis Panagiotou/EPA/EFE) 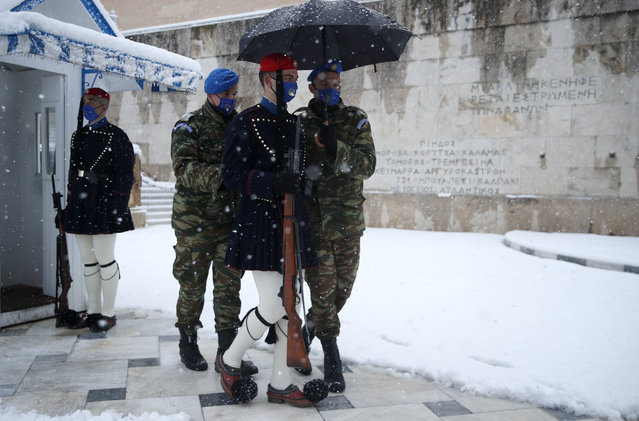 Soldiers help a member of the Presidential Guard, known as Evzonas, during the changing of the guard as snow falls at the tomb of the Unknown Soldier in Athens, Tuesday, February 16, 2021. A cold weather front has hit Greece, sending temperatures plunging from the low 20s Celsius (around 70 Fahrenheit) on Friday to well below freezing on Tuesday, and heavy snowfall in central Athens. (Photo by Thanassis Stavrakis/AP Photo) 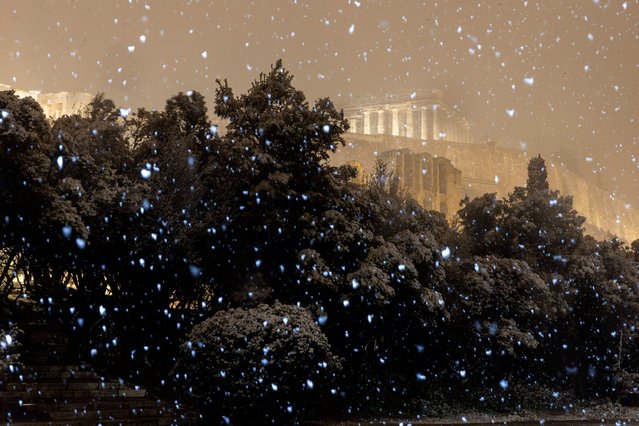 The ancient Parthenon temple on the Acropolis hill is illuminated during a snowfall in central Athens, early Tuesday, February 16, 2021. (Photo by Marios Lolos/Imago) 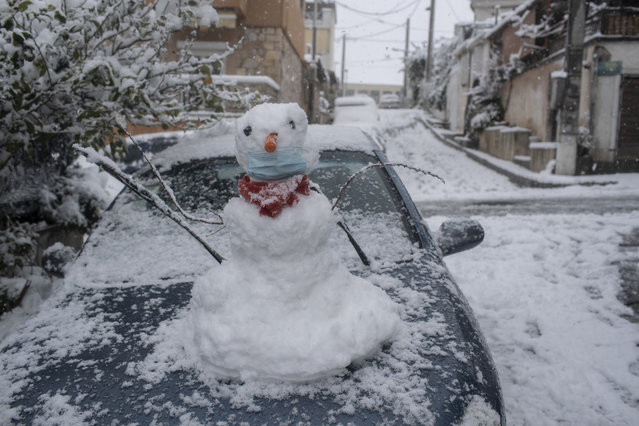 A snow man wearing a face mask stands on a car in Athens, on Tuesday, February 16, 2021. Unusually heavy snowfall has blanketed central Athens, with authorities warning residents particularly in the Greek capital's northern and eastern suburbs to avoid leaving their homes. (Photo by Petros Giannakouris/AP Photo) 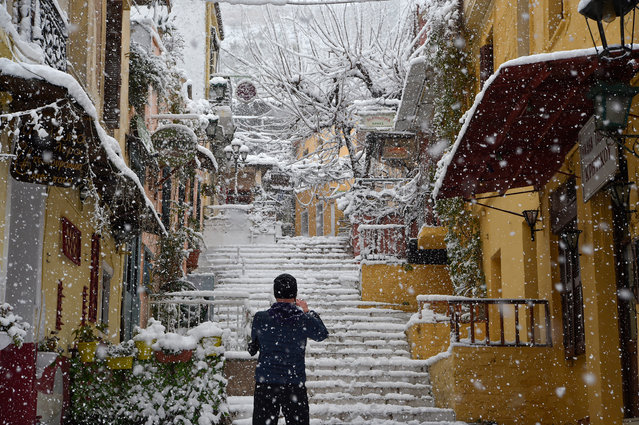 A man makes their way through the popular touristic area of Plaka during a heavy snowfall in Athens on February 16, 2021 in Athens, Greece. Athens, currently in a two-week Covid-19 lockdown, woke up to a rare amount of snow not seen in the city centre for several decades. (Photo by Milos Bicanski/Getty Images) 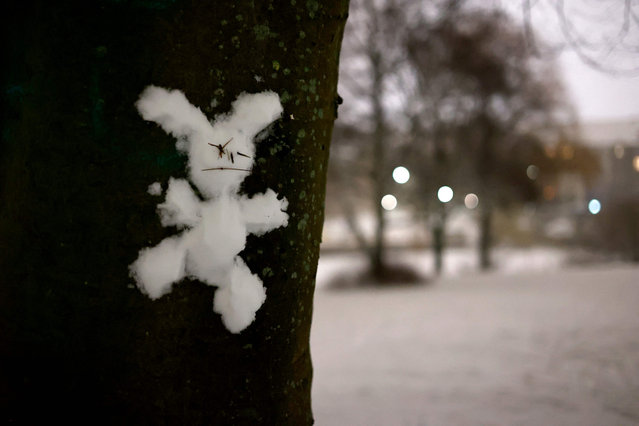 A “snow bunny” on a tree trunk in Hamburg, northern Germany on February 16, 2021. Heavy snowfall had surprised Hamburg in the evening. (Photo by Morris Mac Matzen/AFP Photo) 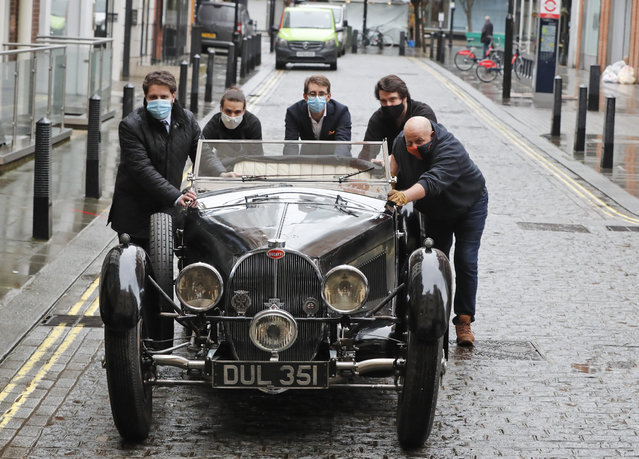 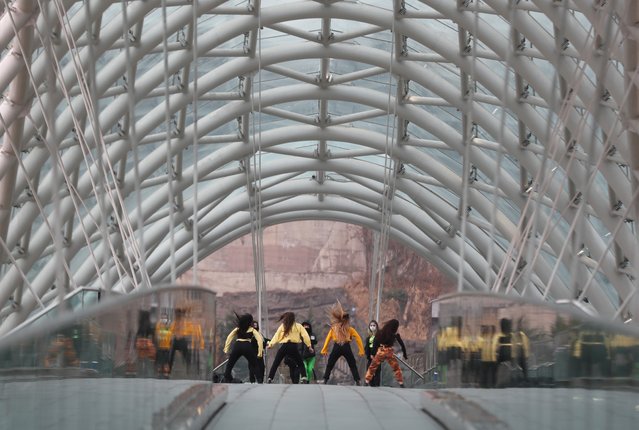 Girls dance on a pedestrian bridge on a rainy day in Tbilisi, Georgia, 16 February 2021. Reports state that the rain has fallen in most re​gions of Georgia. (Photo by Zurab Kurtsikidze/EPA/EFE) 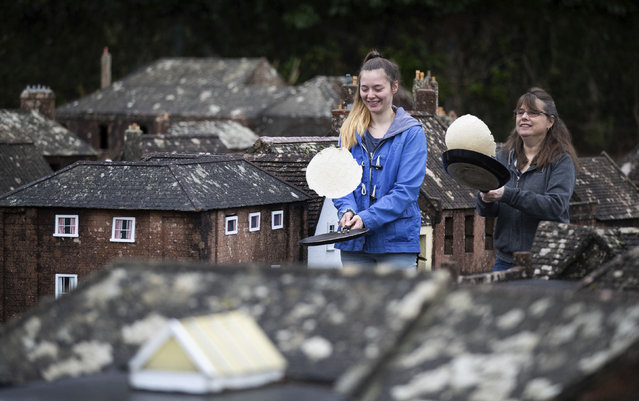 Mother and daughter volunteers Niki, right, and Rachel practice their pancake tossing technique in the streets of Wimborne model town and gardens before taking part in the Wimborne Minster virtual pancake race, in Wimborne, England, Tuesday February 16, 2021. Although a physical race cannot take place this year due to the coronavirus restrictions, Wimborne Minster has invited people to film themselves tossing a pancake for 30 seconds and posting it to Facebook. (Photo by Andrew Matthews/PA Wire via AP Photo)
Edit Del
17 Feb 2021 10:01:00, post received 0 comments
Publication archive:
←   →
Popular tags:
All tags
Last searches: