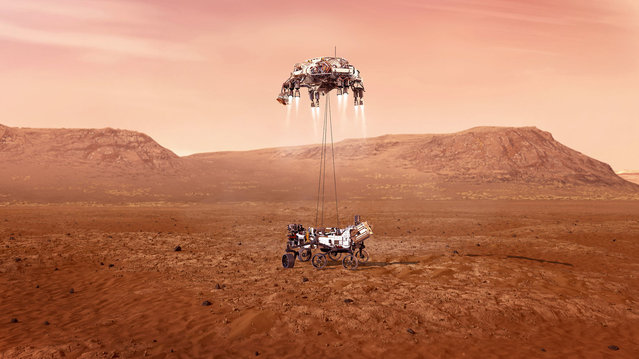 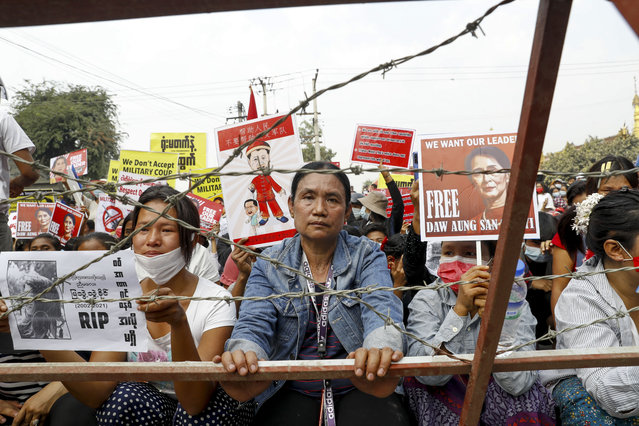 Demonstrators protest against the military junta's arrest and chagrining of National League for Democracy party lawmakers, Mandalay region Chief Minister Zaw Myint Maung and Mayor Ye Lwin, outside Aung Myay Thar Zan Township court in Mandalay, Myanmar, Thursday, February 18, 2021. Tens of thousands of demonstrators flooded the streets of Myanmar's biggest city, Yangon, Wednesday, in one of largest protests yet of a coup, despite warnings from a U.N. human rights expert that recent troop movements could indicate the military was planning a violent crackdown. (Photo by AP Photo/Stringer) 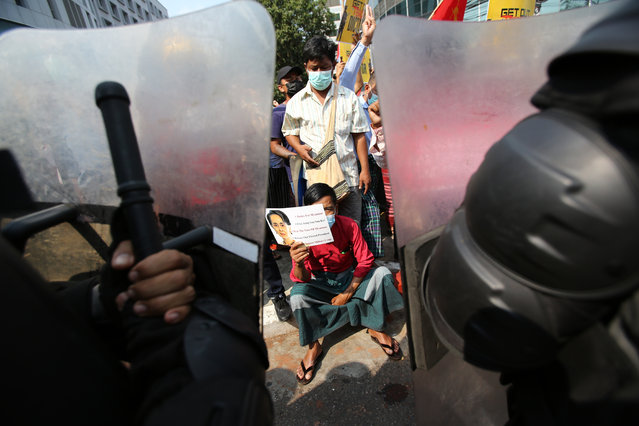 An anti-coup protester holds a poster with an image of deposed Myanmar leader Aung San Suu Kyi as he sits in front of riot police in Yangon, Myanmar Friday, February 19, 2021. The daily protests campaigning for civil disobedience in Myanmar are increasingly focusing on businesses and government institutions that sustain the economy. (Photo by AP Photo/Stringer) 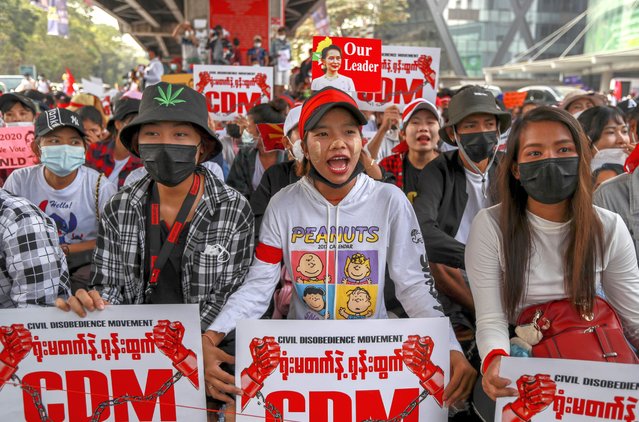 Demonstrators display placards with CDM, refers to the civil disobedience movement that has seen doctors, engineers and others in Myanmar refuse to work until the military releases elected political leaders and returns the country to civilian rule, during a protest against the military coup in Yangon, Myanmar Thursday, February 18, 2021. Demonstrators against Myanmar’s military takeover returned to the streets Thursday after a night of armed intimidation by security forces in the country’s second biggest city. (Photo by AP Photo/Stringer) 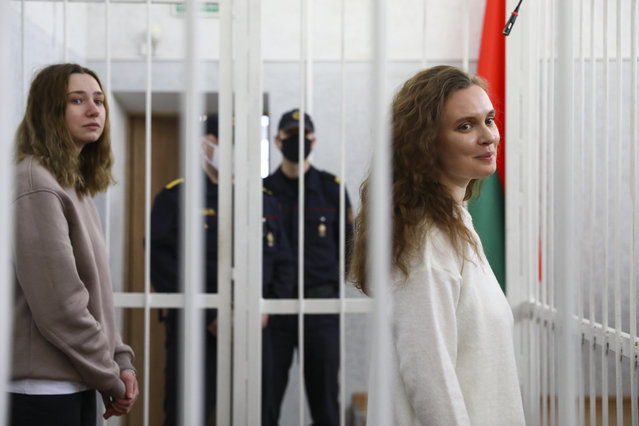 Journalists Katsiaryna Andreyeva, right, and Daria Chultsova stand inside a defendants' cage in a court room in Minsk, Belarus, Thursday, February 18, 2021. A court in Belarus on Thursday sent two female journalists to prison for years on charges of violating public order after they covered a protest against the nation's authoritarian president. The court in the Belarusian capital of Minsk on Thursday handed two-year sentences to Katsiaryna Andreyeva and Daria Chultsova of the Belsat TV channel. (Photo by AP Photo/Stringer) 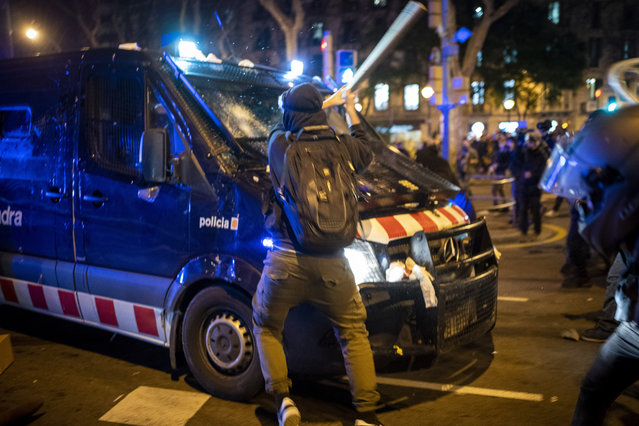 A demonstrator hits a police van with a bat during clashes following a protest condemning the arrest of rap singer Pablo Hasél in Barcelona, Spain, Wednesday, February 17, 2021. Police fired rubber bullets and baton-charged protesters as clashes erupted for a second night in a row Wednesday at demonstrations over the arrest of Spanish rap artist Pablo Hasél. Many protesters threw objects at police and used rubbish containers and overturned motorbikes to block streets in both Madrid and Barcelona. (Photo by Emilio Morenatti/AP Photo) 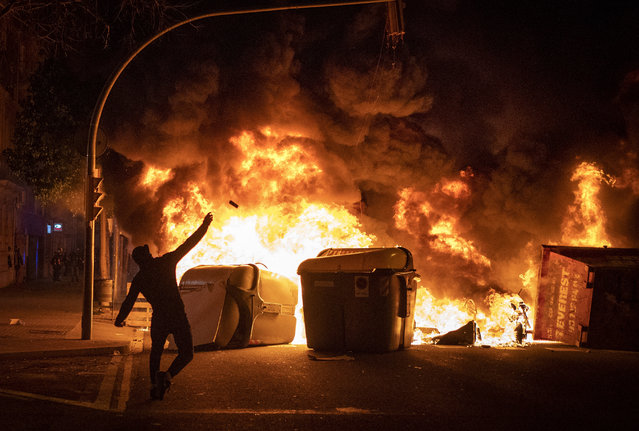 A demonstrator throws a stone against police during clashes following a protest condemning the arrest of rap singer Pablo Hasél in Barcelona, Spain, Thursday, February 18, 2021. Protests over the imprisonment of a rapper convicted for insulting the Spanish monarchy and praising terrorist violence have morphed for the third night in a row into rioting. Pablo Hasél began this week to serve a 9-month sentence in a northeastern prison. (Photo by Emilio Morenatti/AP Photo) 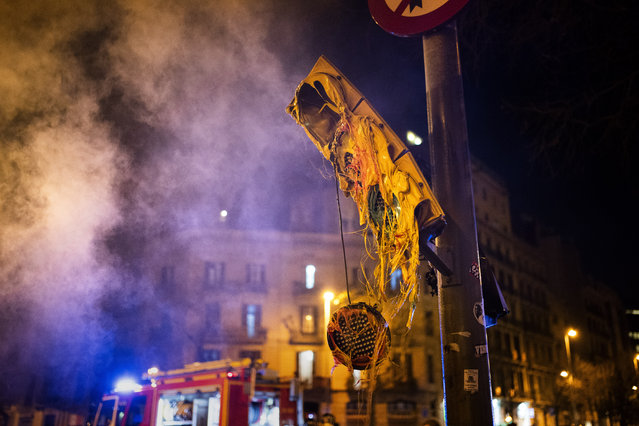 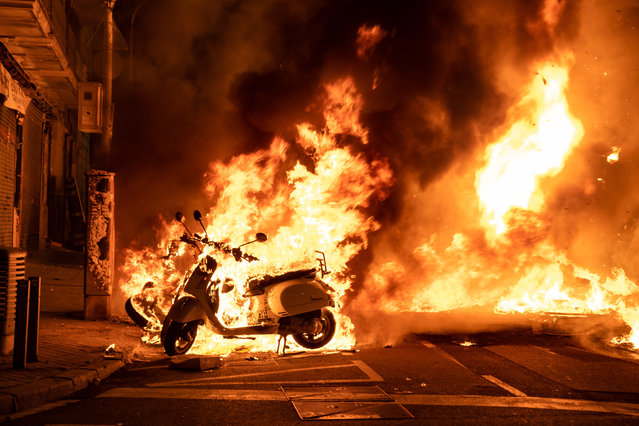 Burning motorcycles during another night of protests and riots in response to the arrest and imprisonment of rapper Pablo Hasél in Barcelona, Spain on February 17, 2021. The rapper has been accused of exalting terrorism and insulting the crown for the content of the lyrics of his songs. (Photo by Paco Freire/SOPA Images/Rex Features/Shutterstock) 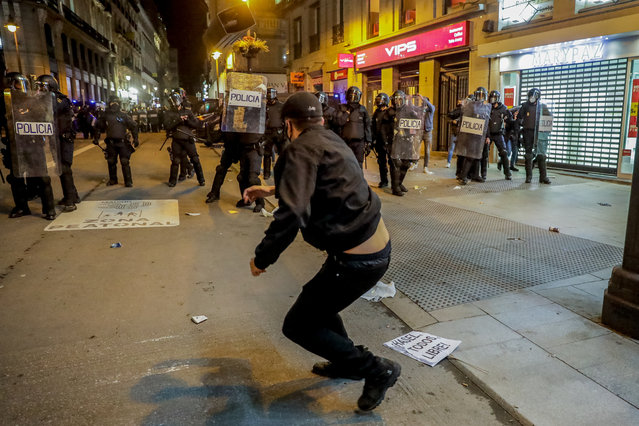 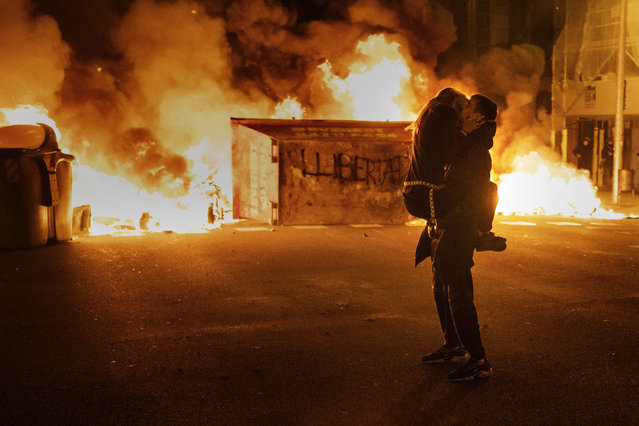 A couple kiss in front of a barricade set by demonstrators during clashes with police following a protest condemning the arrest of rap singer Pablo Hasél in Barcelona, Spain, Thursday, February 18, 2021. (Photo by Emilio Morenatti/AP Photo) 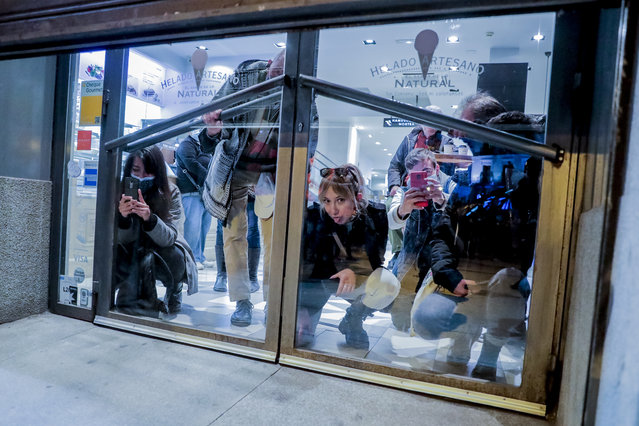 People stand inside of a coffee bar during clash with police and demonstrators following a protest condemning the arrest of rap singer Pablo Hasel in Madrid, Spain, Wednesday, February 17, 2021. (Photo by Manu Fernandez/AP Photo) 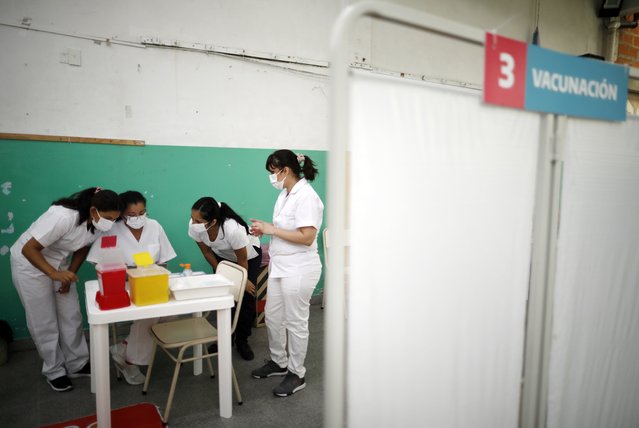 Nurses read instructions for injecting doses of the Sputnik V COVID-19 vaccine at a Bernal public school, on the outskirts of Buenos Aires, Argentina, Thursday, February 18, 2021, as the country begins to vaccinate healthcare workers against the new coronavirus. (Photo by Natacha Pisarenko/AP Photo) 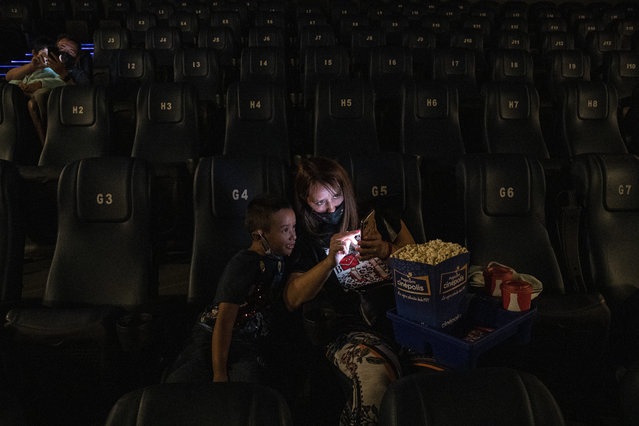 Vivenka Ivanovich and her 6-year-old son Mateo Blanco, wait for the start of a movie at the Cinepolis cinema on the first day after the COVID-19 lockdown in Santiago, Chile, February 18, 2021. The cinemas authorized to open are those located in the communes that are in the intermediate phases of sanitary restrictions. (Photo by Esteban Felix/AP Photo) 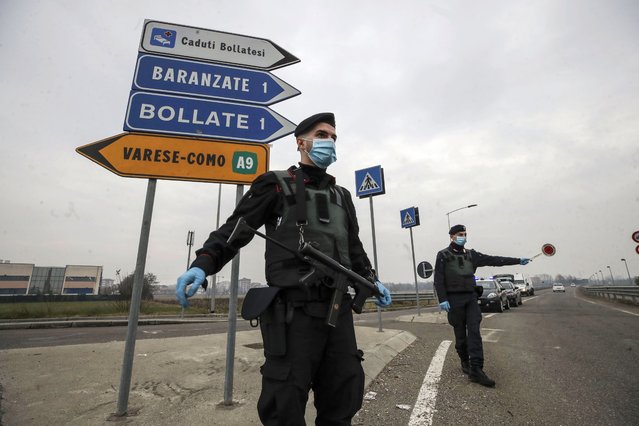 Carabinieri officers patrol one of the main access road to Bollate, in the outskirts of Milan, Italy, Thursday, February 18, 2021. Four cities in Lombardy region, including one in the province of Brescia, have been placed under the strictest “red zone” lockdown measures following spikes of infections traced to the highly contagious British variant. Other red zones have been imposed in cities in the central Italian regions of Umbria, Tuscany, Abruzzo and Lazio, sparking calls for another nationwide lockdown from hospital doctors who are once again seeing their ICU beds fill up. (Photo by Luca Bruno/AP Photo) 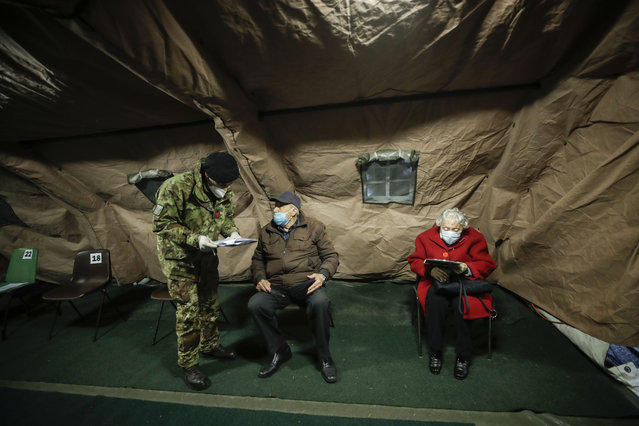 Over eighty-year-olds wait to be administered a dose of the Pfizer/BioNTech vaccine, in a tent set up at the Baggio military hospital in Milan, Italy, Thursday, February 18, 2021. (Photo by Luca Bruno/AP Photo) 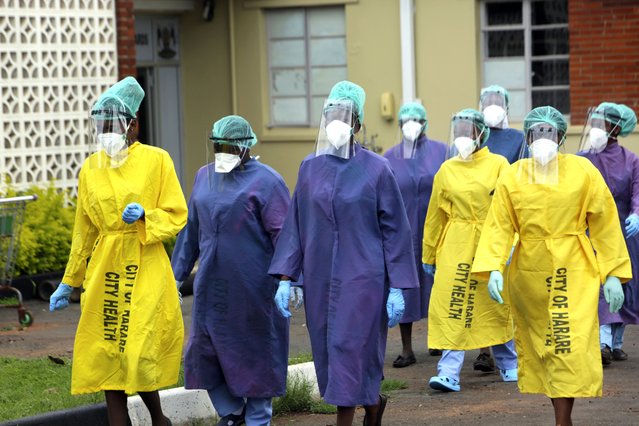 Health workers are seen at a local hospital where China's Sinopharm vaccine was being administered in Harare, Thursday, February 18, 2021 Zimbabwean Deputy President Constatino Chiwenga become the first person in the country to receive the jab, marking the first phase of the country's vaccination campaign. (Photo by Tsvangirayi Mukwazhi/AP Photo) 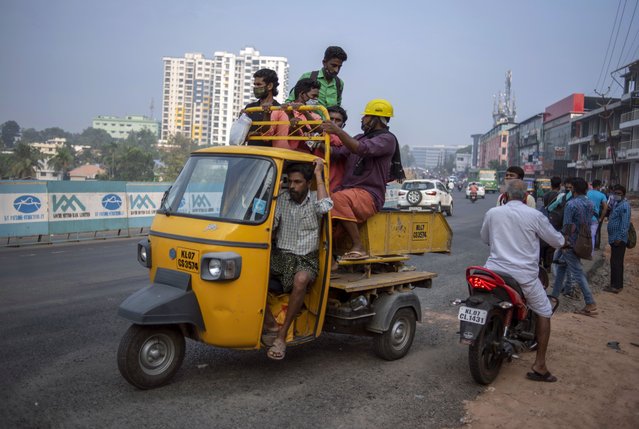 Migrant laborers wearing masks as a precaution against the coronavirus leave for work in Kochi, Kerala state, India, Thursday, February 18, 2021. The southern state, which had previously been hailed as a blueprint for tackling the virus now accounts for nearly half of India's current COVID-19 cases. (Photo by R.S. Iyer/AP Photo) 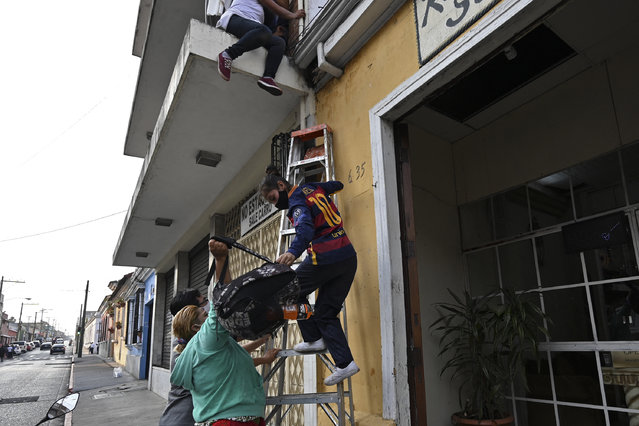 A teenager is helped with a ladder as she climbs down from a building to escape the Zafiro I shelter in Guatemala City on February 17, 2021. Ten girls and teenagers who remained in a state shelter escaped for alleged rights abuse. (Photo by Johan Ordonez/AFP Photo) 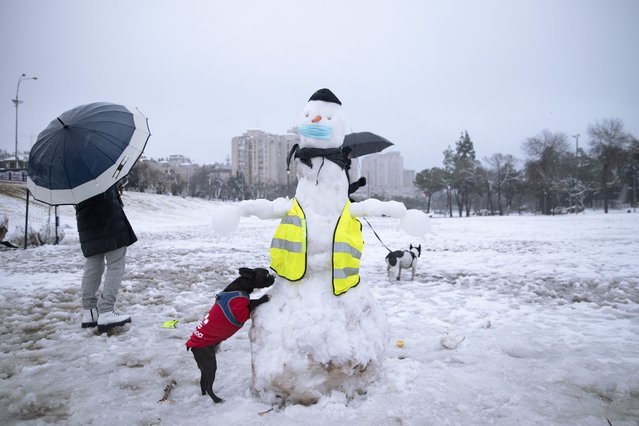 People walk their dogs next to a snowman decorated with a face mask in a snow-covered park, in Jerusalem, Thursday, February 18, 2021. (Photo by Oded Balilty/AP Photo) 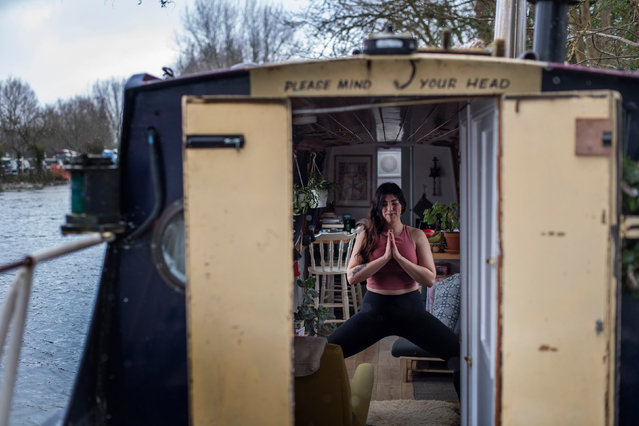 Yoga teacher Harriet McAtee, who is 6ft tall, performs a “Utkata Konasana” pose during a class on her 6ft wide narrowboat in Oxford, UK on Thursday February 18, 2021. The Coronavirus pandemic has forced Harriet to conduct her classes via zoom video calls rather than face-to-face as she did pre-pandemic, but she now teaches to people all around the world, with students reaching as far as New Zealand. (Photo by Victoria Jones/PA Images via Getty Images)
Edit Del
19 Feb 2021 09:32:00, post received 0 comments
Publication archive:
←   →
Popular tags:
All tags
Last searches: