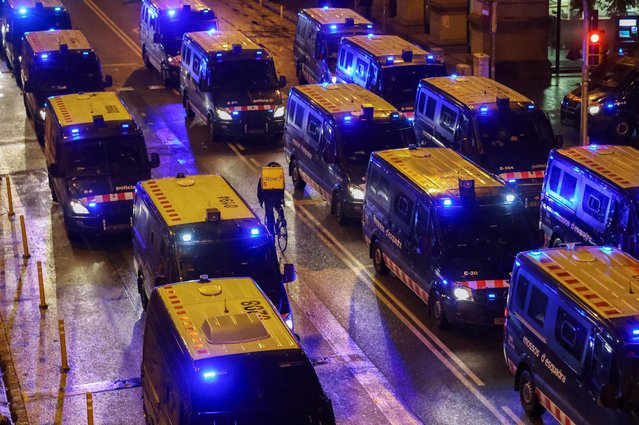 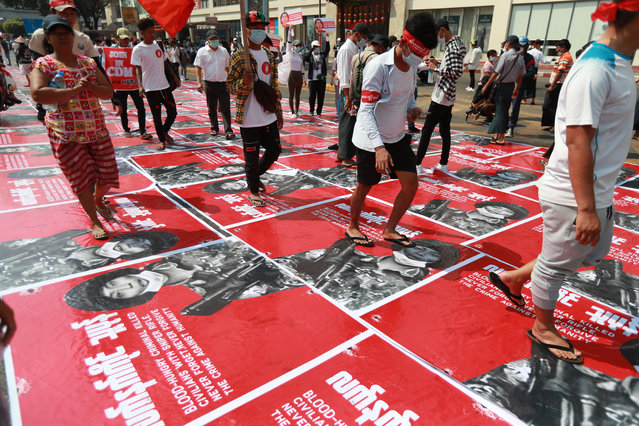 Anti-coup protesters step on posters with an image of a soldier and a Burmese sign that reads “armed terrorist” plastered on a road in Yangon, Myanmar Monday, February 22, 2021. Protesters gathered in Myanmar's biggest city Monday despite the ruling junta's thinly veiled threat to use lethal force if people answered a call for a general strike opposing the military takeover three weeks ago. (Photo by AP Photo/Stringer) 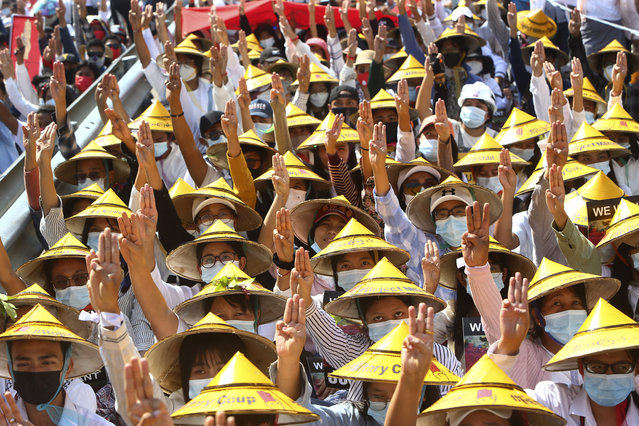 Anti-coup protesters flash the three-fingered salute during a rally near the Mandalay Railway Station in Mandalay, Myanmar Monday, February 22, 2021. A call for a Monday general strike by demonstrators in Myanmar protesting the military's seizure of power has been met by the ruling junta with a thinly veiled threat to use lethal force, raising the possibility of major clashes. (Photo by AP Photo/Stringer) 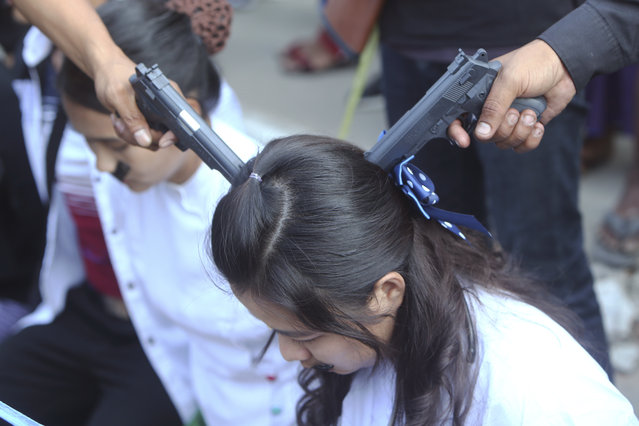 A woman depicts the plight of a civil servant being forced to work at gunpoint by the military junta during an anti-coup rally in Mandalay, Myanmar, Monday, February 22, 2021. (Photo by AP Photo/Stringer) 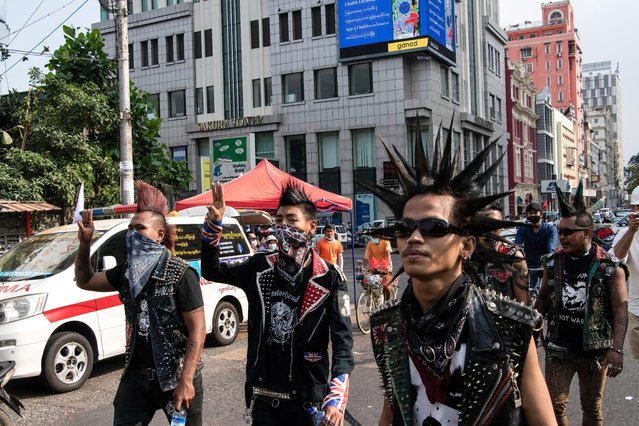 Myanmar Punk Boys march on the street during the demonstration in Yangon on February 22, 2021. A massive crowd took to the streets of Yangon to protest against the military coup and demanded the release of Aung San Suu Kyi. Myanmar's military detained State Counsellor of Myanmar Aung San Suu Kyi on February 01, 2021 and declared a state of emergency while seizing the power in the country for a year after losing the election against the National League for Democracy (NLD). (Photo by Santosh Krl/SOPA Images/Rex Features/Shutterstock) 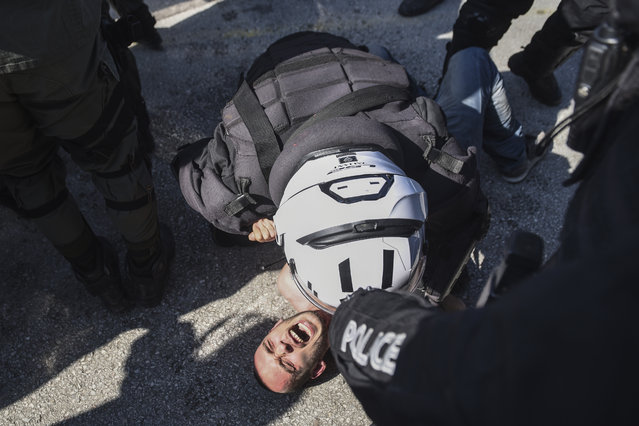 Police detain a protester at the University of Thessaloniki in northern Greece, on Monday, February 22, 2021. Police clashed with protesters and detained more than 30 people in Greece's second-largest city Monday during a demonstration against a new campus security law. (Photo by Giannis Papanikos/AP Photo) 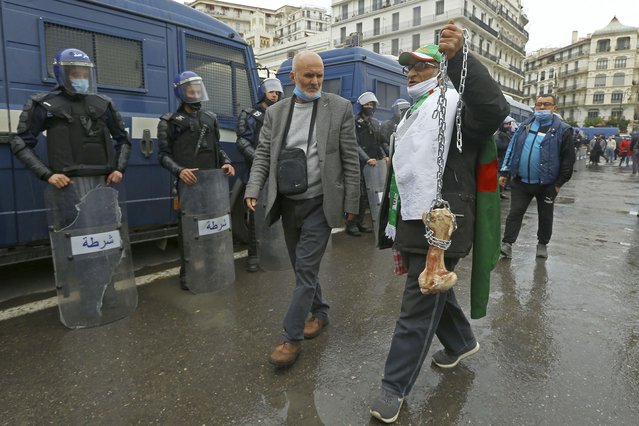 A man holds a bone while shouting “That's what's left for those who vote for the President” as Algerians demonstrate in Algiers to mark the second anniversary of the Hirak movement, Monday February 22, 2021. February 22 marks the second anniversary of Hirak, the popular movement that led to the fall of Algerian President Abdelaziz Bouteflika. (Photo by Anis Belghoul/AP Photo) 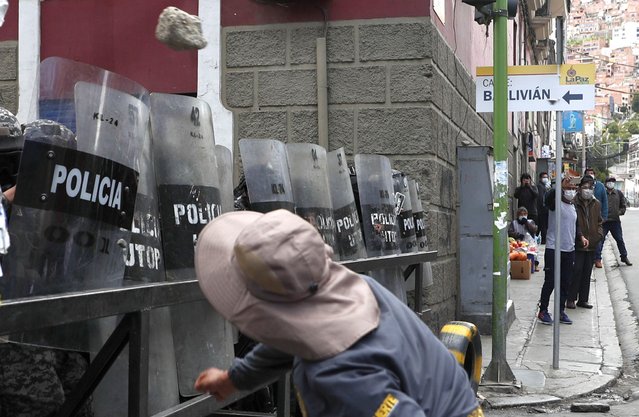 A man throws a stone at police outside the government palace during a protest in support of health workers amid the COVID-19 pandemic in La Paz, Bolivia, Monday, February 22, 2021. Health workers have called for a general strike until Feb. 28 to protest a new emergency sanitary law that among other things allows for the hiring of foreign doctors and prohibits strikes. (Photo by Juan Karita/AP Photo) 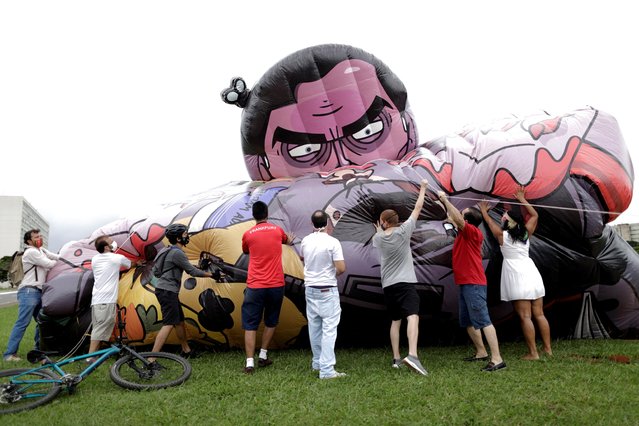 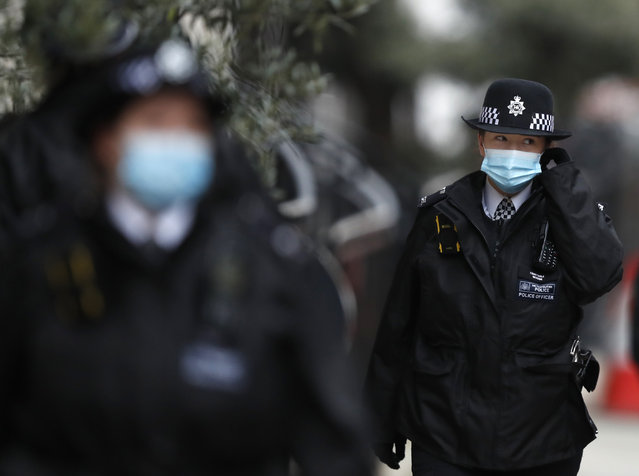 Police stand guard outside the King Edward VII hospital In London, Monday, February 22, 2021, where Britain's Prince Philip is being treated. Prince Philip, 99, was admitted to the hospital on Tuesday on the advice of his doctor in what Buckingham Palace described as “a precautionary measure”. (Photo by Alastair Grant/AP Photo) 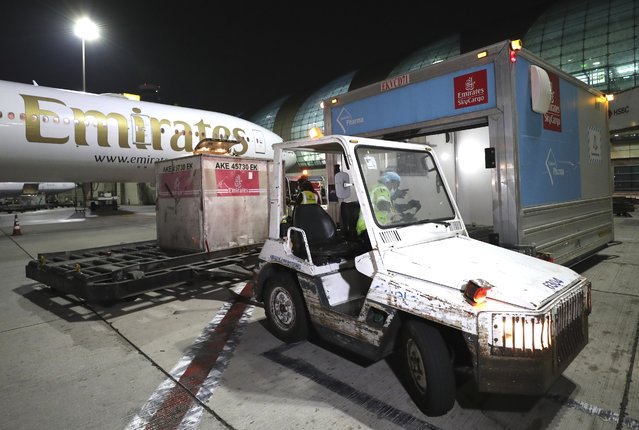 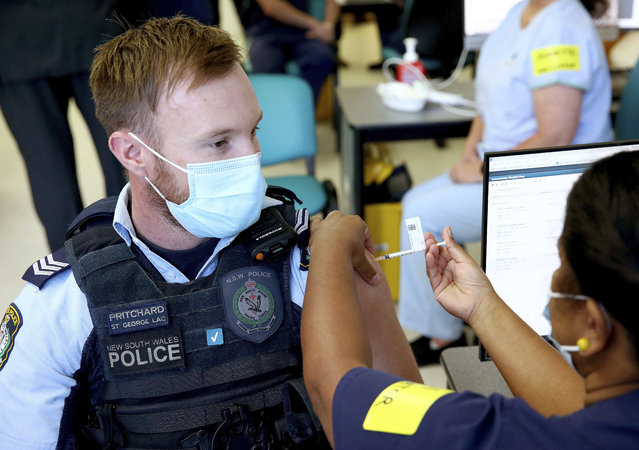 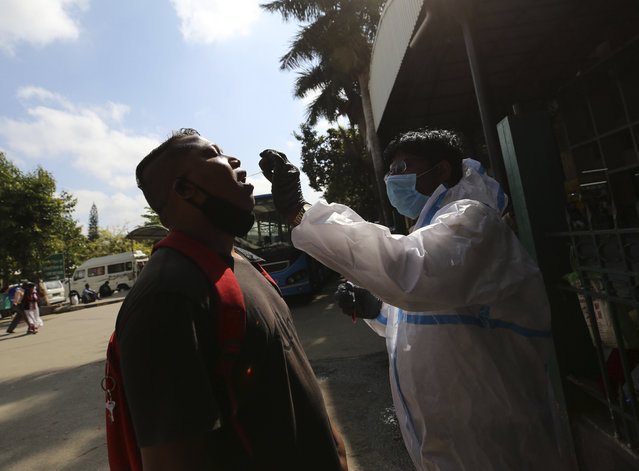 A health worker collects mouth swab of a traveler to test for COVID-19 outside a train station in Bengaluru, India, Monday, February 22, 2021. Cases of COVID-19 are increasing in some parts of India after months of a steady nationwide decline, prompting authorities to impose lockdowns and other virus restrictions. (Photo by Aijaz Rahi/AP Photo) 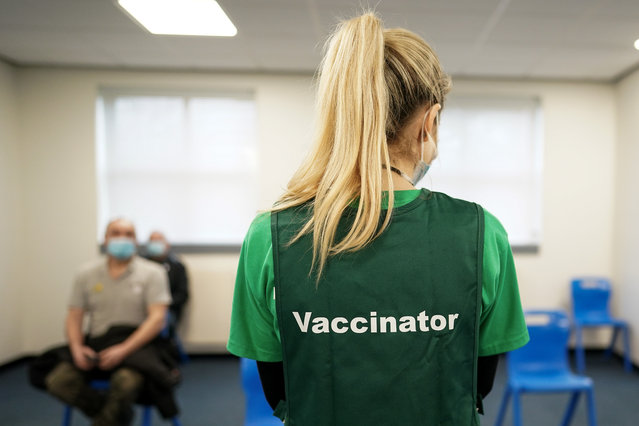 A vaccinator at the Arnison Vaccination Centre near Durham waits to assist patients on February 22, 2021 in Durham, England. The Arnison Centre site is the third Large Vaccination Centre for the North East region to open and joins the two Large Vaccination Centres which are at Newcastle’s Centre for Life and the NHS Nightingale Hospital North East, Sunderland and will increase the capacity to help the NHS vaccinate as many people as possible as quickly as possible. The Durham site will be known as the Arnison Vaccination Centre and is based at the Arnison shopping and retail park. The location was chosen in consultation with local partners for its accessible location and good public transport links. The Centre will be run by clinical staff, people who have been trained to become vaccinators, administrative staff and a range of volunteers. (Photo by Ian Forsyth/Getty Images) 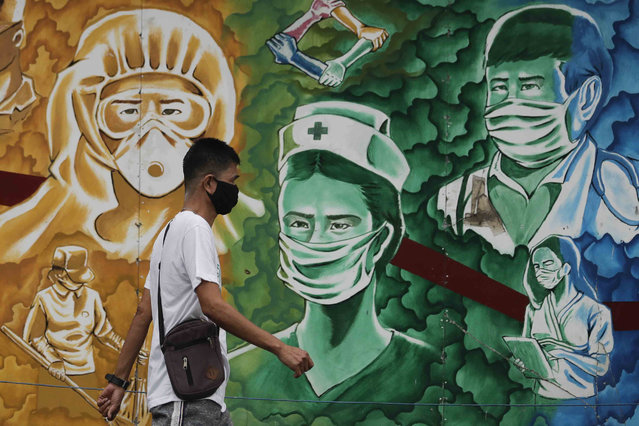 A man wearing a protective mask to prevent the spread of the coronavirus walks beside a mural of health workers outside the Mission Hospital in Pasig, Philippines, Monday, February 22, 2021. Delays have hounded the delivery of COVID-19 to the Philippines, with officials saying the scheduled arrival on Tuesday of 600,000 doses of donated vaccine from Sinovac Biotech Ltd. may be delayed because the China-based firm still lacks an authorization from Manila's Food and Drug Administration for the emergency use of it's vaccine. (Photo by Aaron Favila/AP Photo) 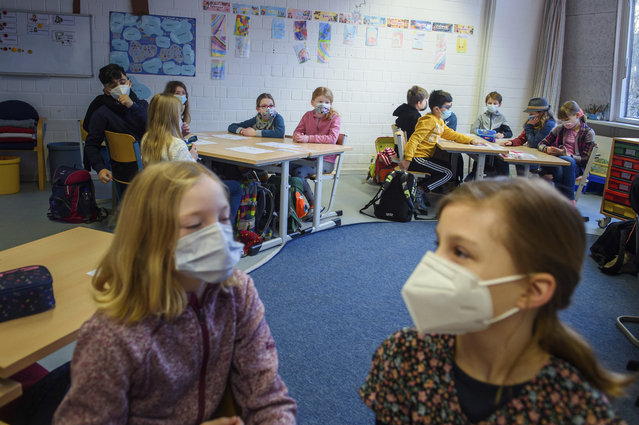 Pupils attend a lesson at the “Russee” elementary school in Kiel, northern Germany, Monday, February 22, 2021. Elementary schools and kindergartens in more than than half of Germany's 16 states reopened Monday after two months of closure due to the coronavirus pandemic. The move comes despite growing signs that the decline in case numbers in Germany is flattening out again and even rising in some areas. (Photo by Gregor Fischer/dpa via AP Photo) 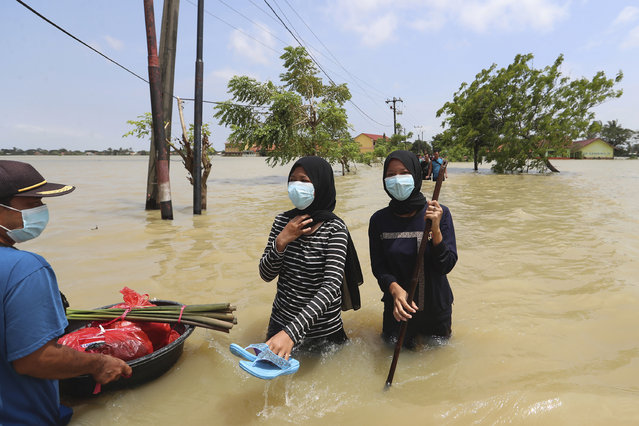 Indonesian men carry their belongings as they wade through the water at a flooded neighborhood following heavy rains in Bekasi, Indonesia, Monday, February 22, 2021. Thousands of residents are being evacuated on the outskirts of Indonesia’s capital amid flooding after the Citarum River embankment broke. (Photo by Achmad Ibrahim/AP Photo) 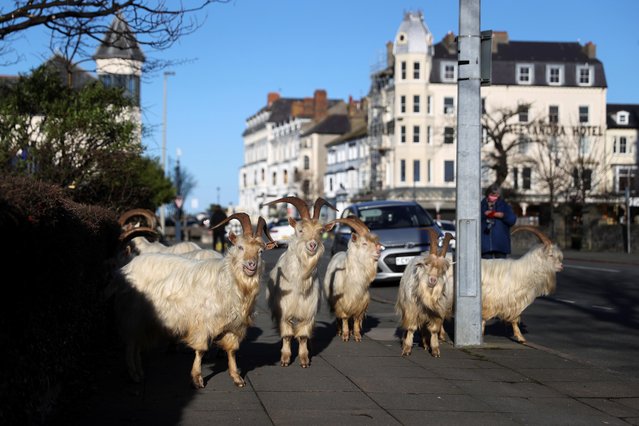 Goats are seen on a sidewalk, as the spread of the coronavirus disease (COVID-19) continues, Llandudno, Wales, Britain February 22, 2021. The herd of Kashmir goats has visited the seaside resort town several times since the coronavirus pandemic began, roaming streets emptied during lockdown and feasting on hedges. (Photo by Carl Recine/Reuters) 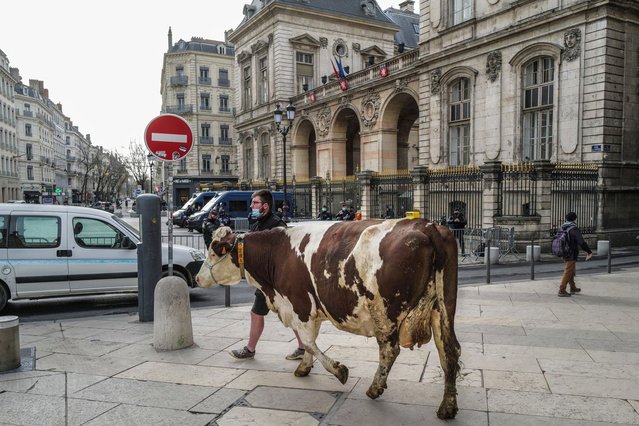 A farmer walks a cow on the square facing the city hall of Lyon on February 22, 2021 during a demonstration to protest against the city majority's decision to keep meat off city schools' menu to, the mayor said, ensure a smooth service at lunchtime during the social distancing enforced by the Covid-19 pandemic. (Photo by Olivier Chassignole/AFP Photo/Profimedia)
Edit Del
23 Feb 2021 10:29:00, post received 0 comments
Publication archive:
←   →
Popular tags:
All tags
Last searches: