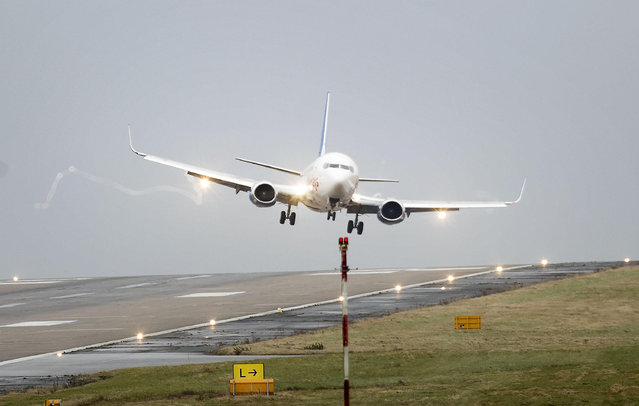 A plane is buffeted by the wind as it comes in to land at Leeds Bradford Airport as as flights were cancelled and commuters were warned they faced delays as winds reached nearly 90mph when Storm Doris battered many part of Britain. Thursday February 23, 2017. (Photo by Danny Lawson/PA Wire via AP Photo) 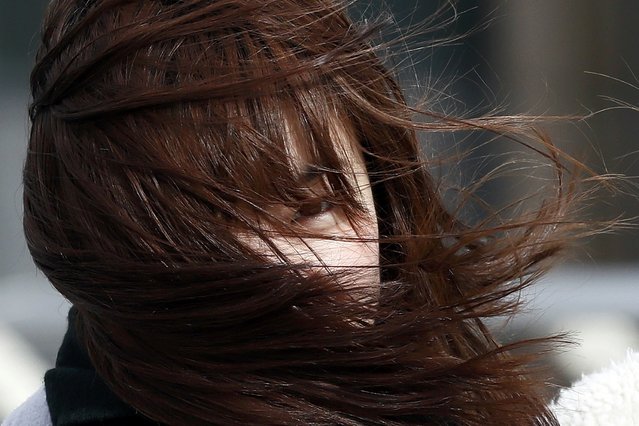 A pedestrian has her hair blown as she walks across a bridge during strong winds in London, Britain, February 23, 2017. (Photo by Stefan Wermuth/Reuters) 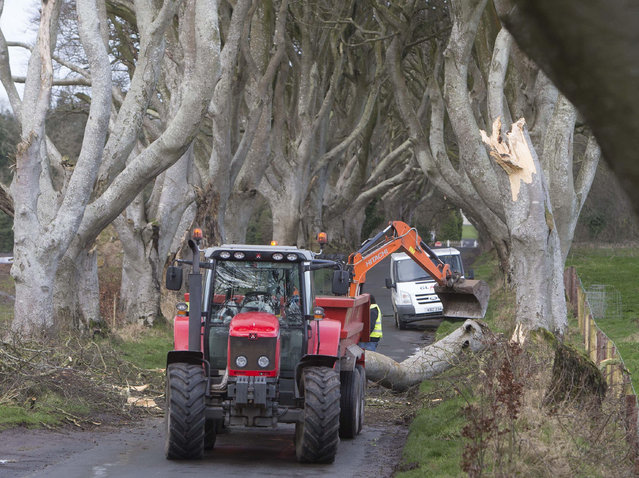 Workmen clear a fallen tree after the tree-lined avenue was damaged in Storm Doris, at Dark Hedges in County Antrim, Northern Ireland, Thursday, February 23, 2017. Flights have been cancelled and commuters were warned they faced delays after Storm Doris reached nearly 90mph. One of the beech trees that make up Dark Hedges, made famous by fantasy drama Game Of Thrones, has fallen victim to high winds that have battered Northern Ireland. (Photo by Steven McAuley/PA Wire via AP Photo) 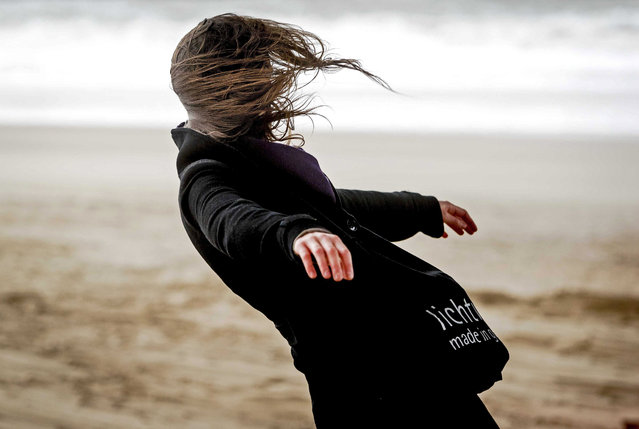 A woman battles the wind during a stormy day at the beach in Scheveningen, The Netherlands, 23 February 2017. (Photo by Remko de Waal/EPA) 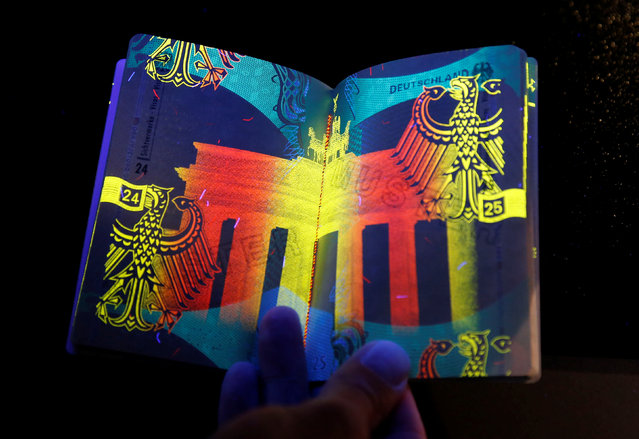 The new German electronic passport is pictured under an ultraviolet light during its presentation to the media in Berlin, Germany, February 23, 2017. (Photo by Fabrizio Bensch/Reuters) 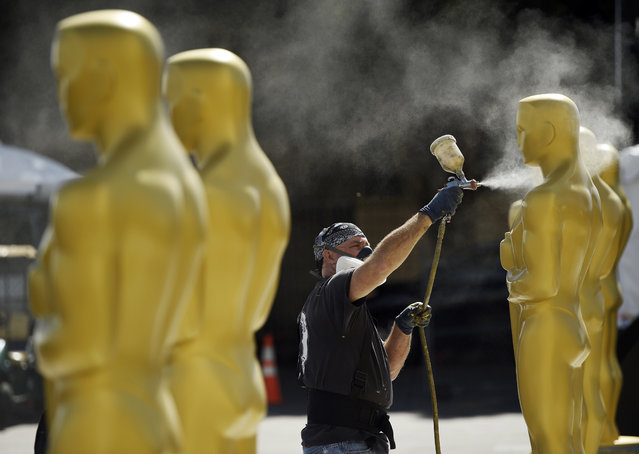 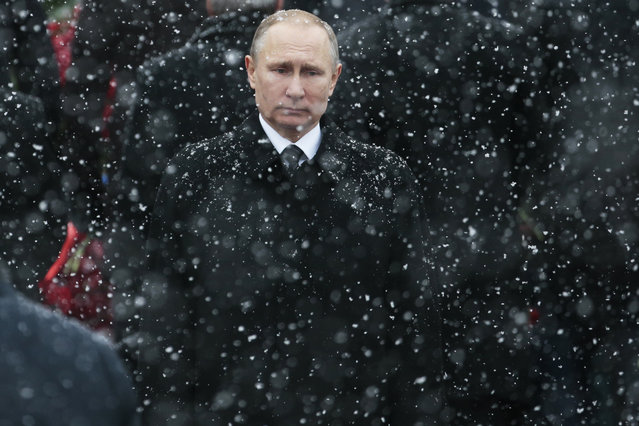 Russian President Vladimir Putin attends a wreath-laying ceremony at the Tomb of the Unknown Soldier in Moscow, Russia, Thursday, February 23, 2017. The Defenders of the Fatherland Day, celebrated in Russia on Feb. 23, honors the nation's military and is a nationwide holiday. (Photo by Ivan Sekretarev/AP Photo) 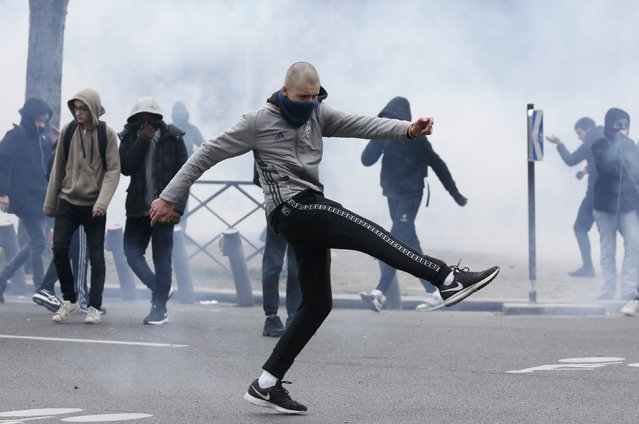 Clouds of tear gas surround youths as they face off with French police during a demonstration against police brutality after a young black man, 22-year-old youth worker named Theo, was severely injured during his arrest earlier this month, in Paris, France, February 23, 2017. (Photo by Gonzalo Fuentes/Reuters) 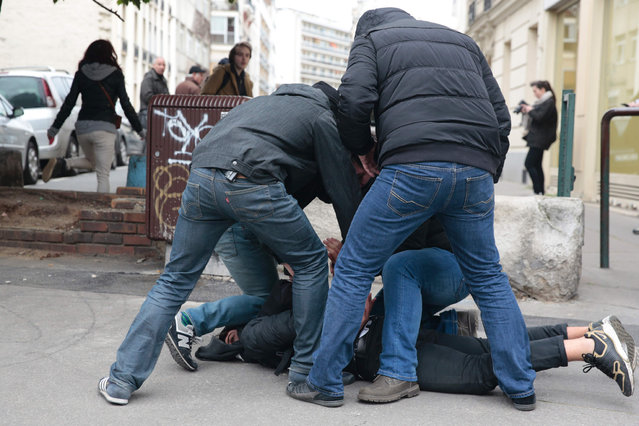 Plain- clothes policemen arrest a man during a protest of students against police brutality, following the alleged rape of Theo in Paris, on February 23, 2017. (Photo by Geoffroy van der Hasselt/AFP Photo) 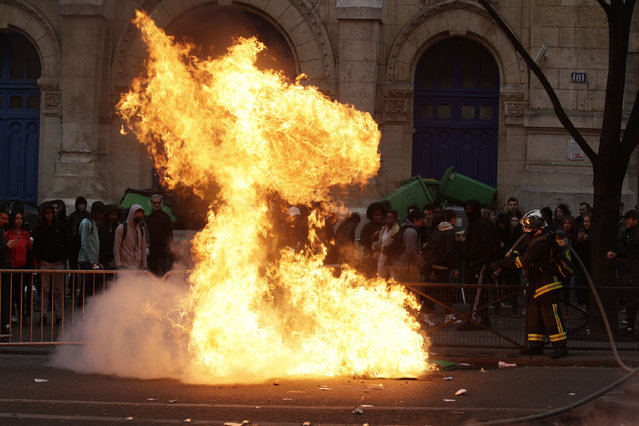 French firemen try to extinguish burning dustbins as students gather during a demonstration against police brutality, following the alleged rape of Theo, outside the “Lycee Voltaire” secondary school in Paris, on February 23, 2017. (Photo by Geoffroy van der Hasselt/AFP Photo) 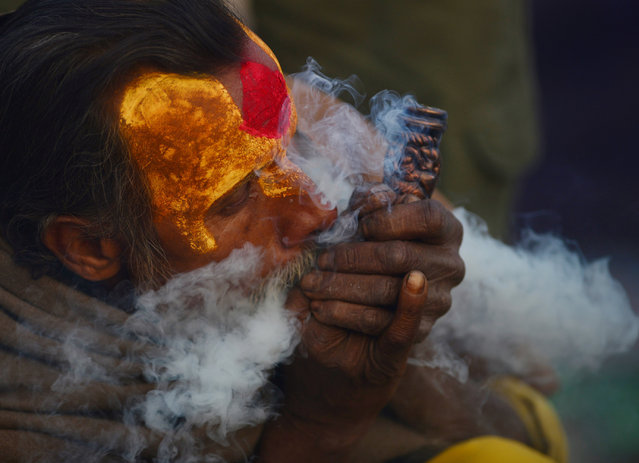 A Nepalese Sadhu (Hindu holy man) smokes a chillum, a traditional clay pipe, as a holy offering to Lord Shiva, the Hindu god of creation and destruction near the Pashupatinath Temple in Kathmandu on Febuary 23, 2017, on the eve of the Hindu festival Maha Shivaratri.
Hindus mark the Maha Shivratri festival by offering prayers and fasting. (Photo by Prakash Mathema/AFP Photo) 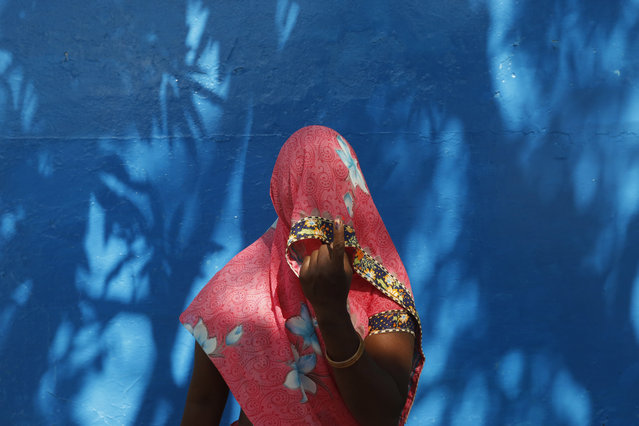 A rural Hindu woman displays the indelible ink mark on her finger after casting her vote at a polling station on the outskirts of Allahabad, Uttar Pradesh state, India, Thursday, February 23, 2017. Uttar Pradesh and four other Indian states are having state legislature elections in February-March, a key mid-term test for Prime Minister Narendra Modi's Hindu nationalist government which has been ruling India since 2014. (Photo by Rajesh Kumar Singh/AP Photo) 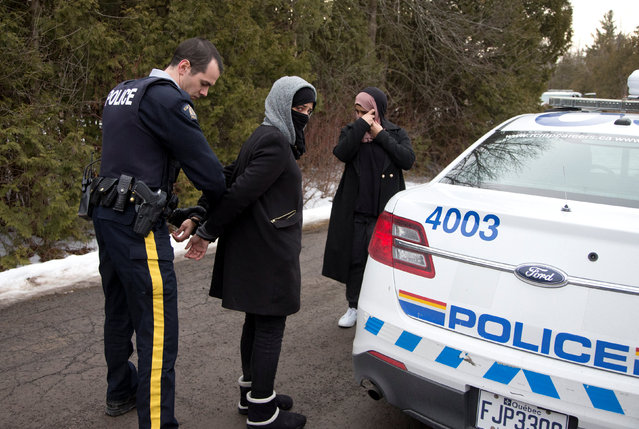 Two women claiming to be from Yemen are detained by a Royal Canadian Mounted Police (RCMP) officer after crossing the U.S.-Canada border into Hemmingford, Quebec, Canada February 22, 2017. (Photo by Christinne Muschi/Reuters) 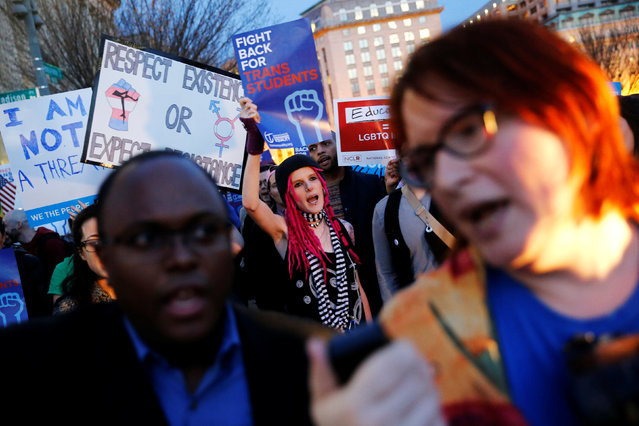 Transgender activists and supporters protest potential changes by the Trump administration in federal guidelines issued to public schools in defense of transgender student rights, near the White House in Washington, U.S. February 22, 2017. (Photo by Jonathan Ernst/Reuters) 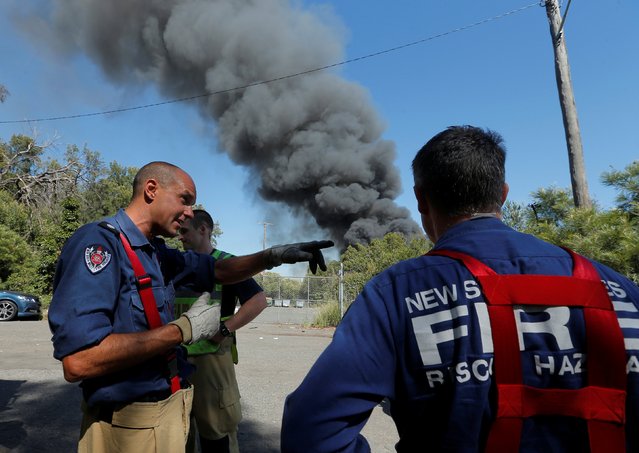 Three out of more than one hundred firefighters battle a blaze sending a thick plume of smoke from a recycling plant in Sydney, Australia, February 23, 2017. (Photo by Jason Reed/Reuters) 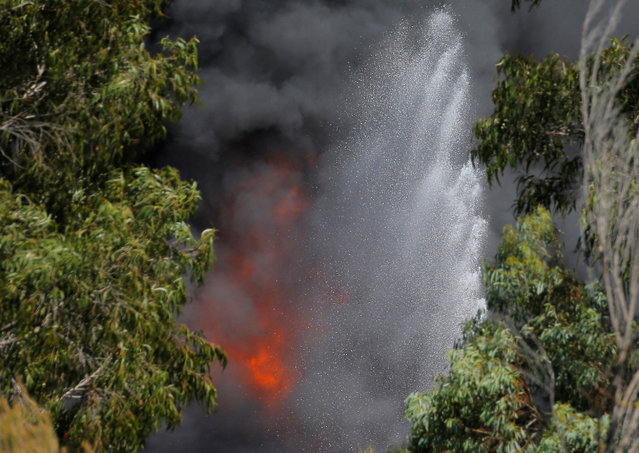 Flames shoot out from smoke as a firefighters attempt to extinguish a blaze sending a thick plume of smoke from a recycling plant in Sydney, Australia, February 23, 2017. (Photo by Jason Reed/Reuters) 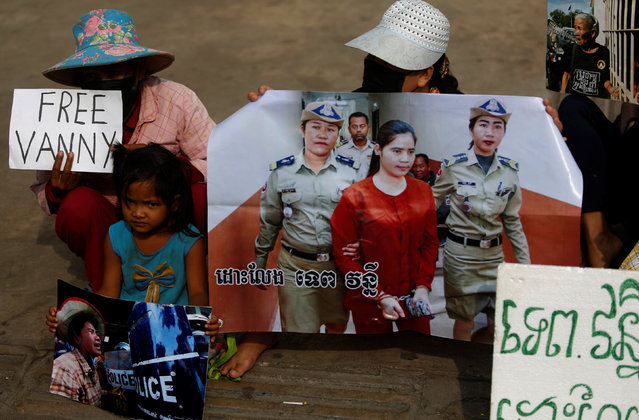 Protesters hold an image of land-rights activist Tep Vanny as they demonstrate in support her, in front of the Phnom penh Municipal Court during her verdict in central Phnom Penh, Cambodia, February 23, 2017. (Photo by Samrang Pring/Reuters) 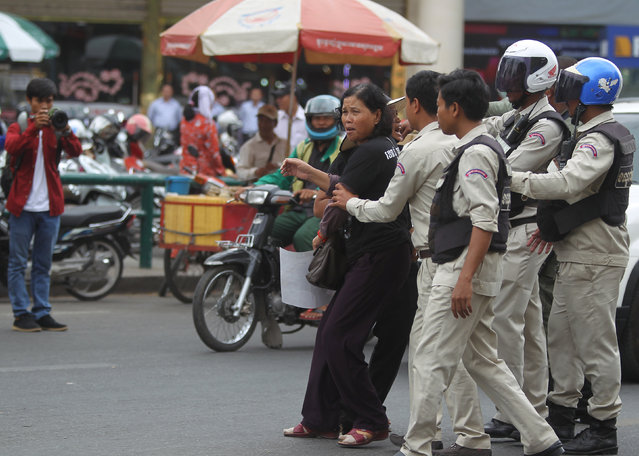 Protesters are pushed back by district authorities as they demonstrate in support of land rights activist Tep Vanny during her verdict in front of the Phnom Penh Municipal Court in central Phnom Penh, Cambodia, February 23, 2017. (Photo by Samrang Pring/Reuters) 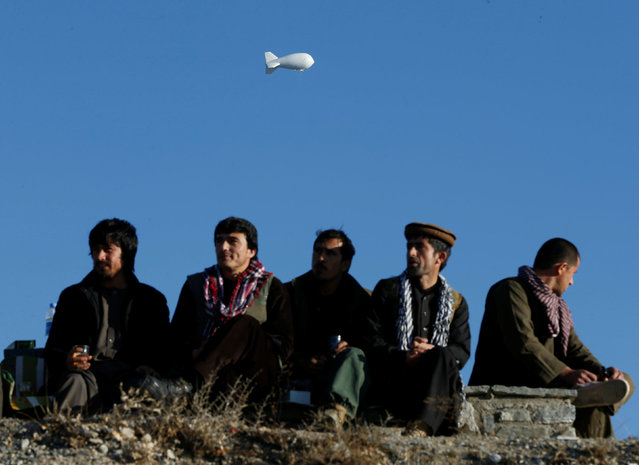 A NATO security ballon is seen in the sky as Afghan men rest on a hilltop in Kabul, Afghanistan February 23, 2017. (Photo by Omar Sobhani/Reuters) 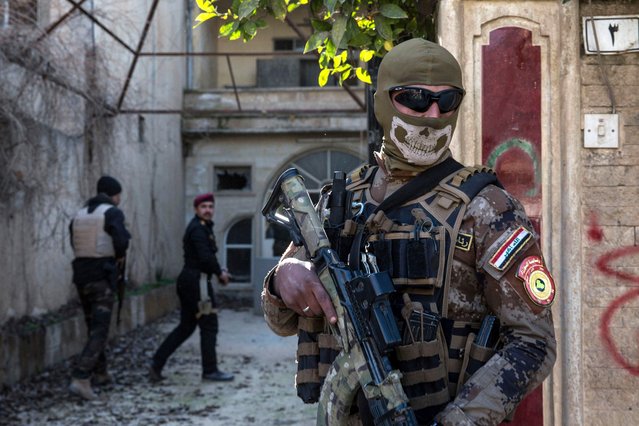 In this Tuesday, February 21, 2017 photo, a masked Iraqi security officer stands guard outside a house during a raid on suspected Islamic State group fighters, in Mosul, Iraq. (Photo by John Beck/AP Photo) 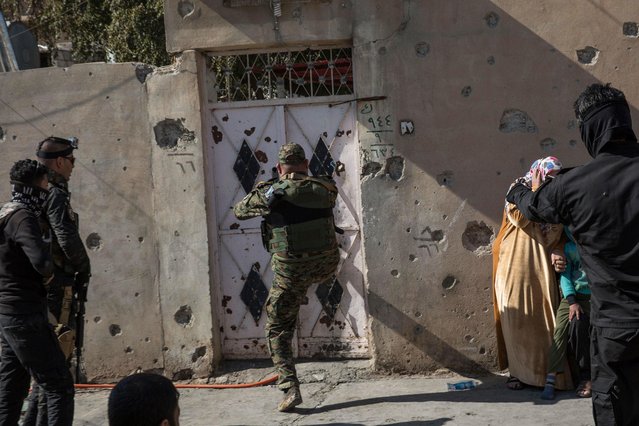 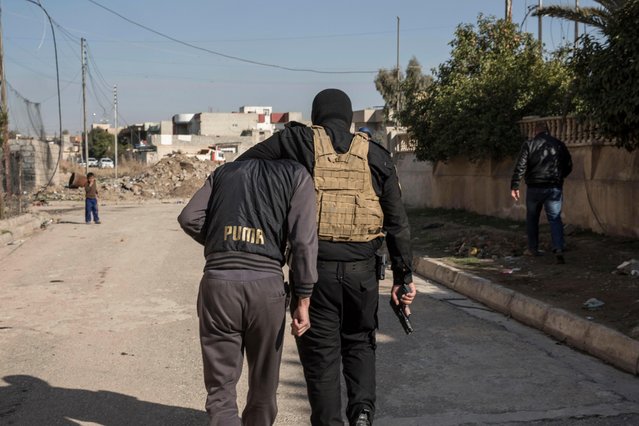 In this Tuesday, February 21, 2017 photo, an Iraqi security officer holds an Islamic State group suspect after arresting him, in eastern Mosul, Iraq. Suspects are identified via intelligence gathered from information received from other civilians in the city. (Photo by John Beck/AP Photo) 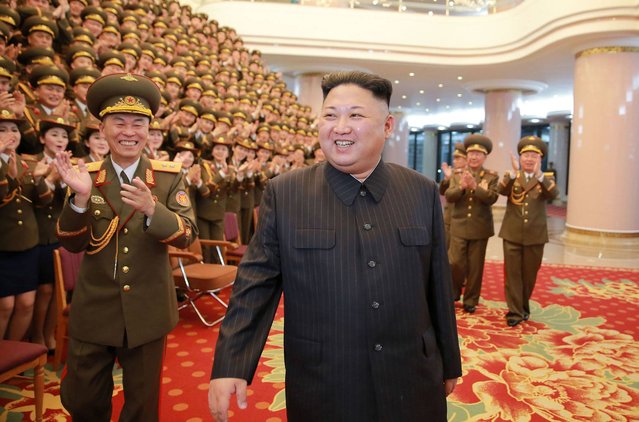 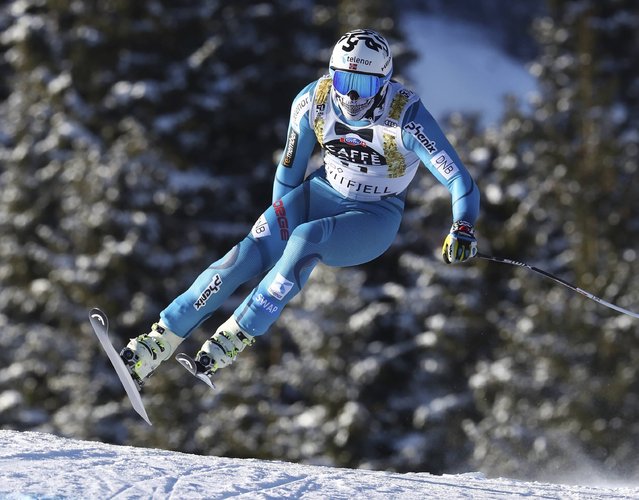 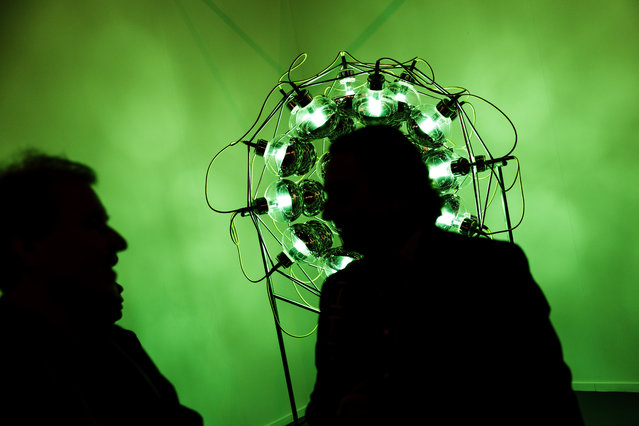 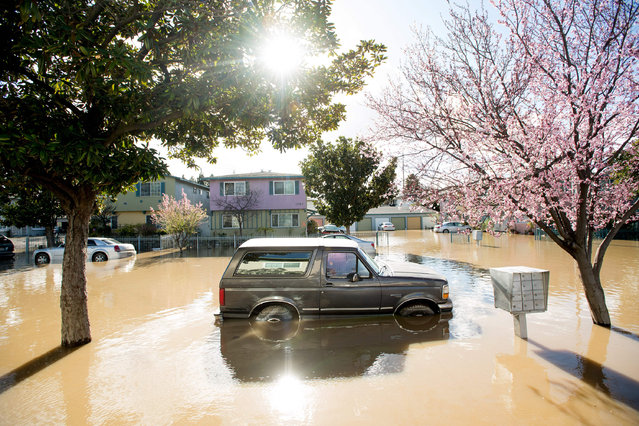 A Ford Bronco rests in floodwaters on February 22, 2017, in the Rock Springs area of San Jose, California. Thousands of people were ordered to evacuate their homes early Wednesday in the northern California city of San Jose as floodwaters inundated neighborhoods and forced the shutdown of a major highway. (Photo by Noah Berger/AFP Photo) 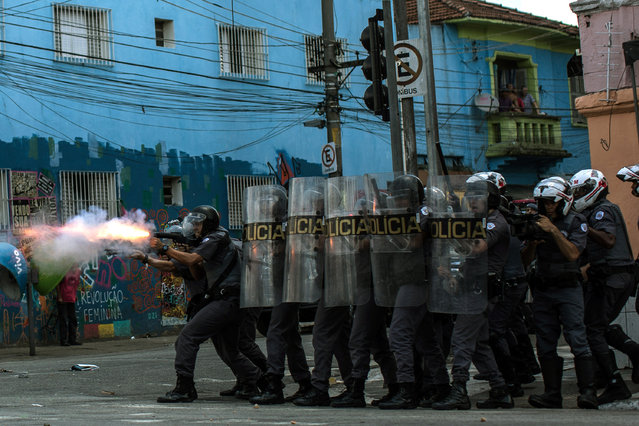 Military tactical police officers advance on suspected drug users in the region known as “Cracolandia” on February 23, 2017 in Sao Paulo, Brazil. In an area of Brazil where drug abuse and violence has taken over the district, the government has introduced street clearance operations by police to remove the crack users. (Photo by Victor Moriyama/Getty Images) 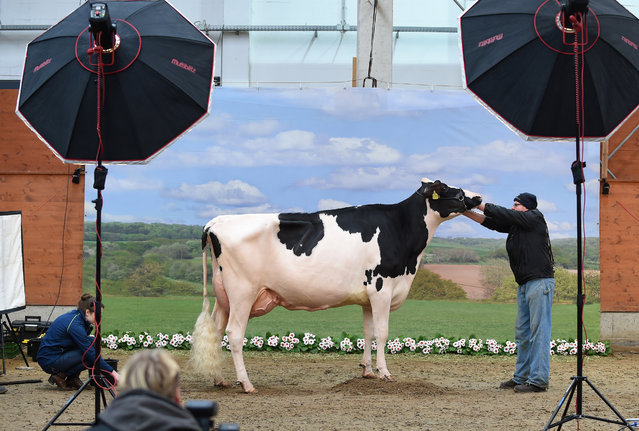 A cow is made ready to be photographed during the 44th edition of the “Schau der Besten” (Show of the Best) dairy cow beauty pageant on February 23, 2017 in Verden an der Aller, northwestern Germany. About 200 cows compete in 18 different categories. (Photo by Carmen Jaspersen/AFP Photo/DPA) 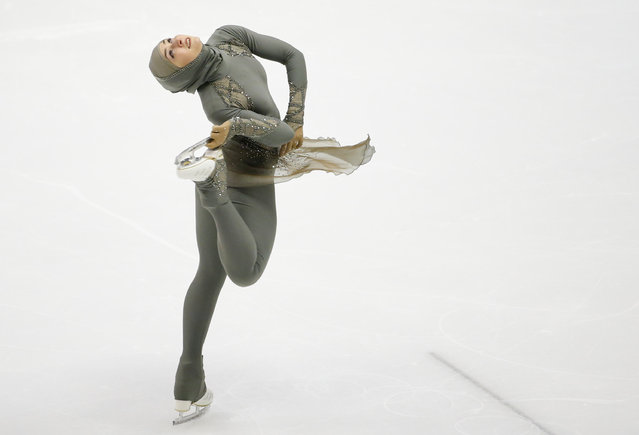 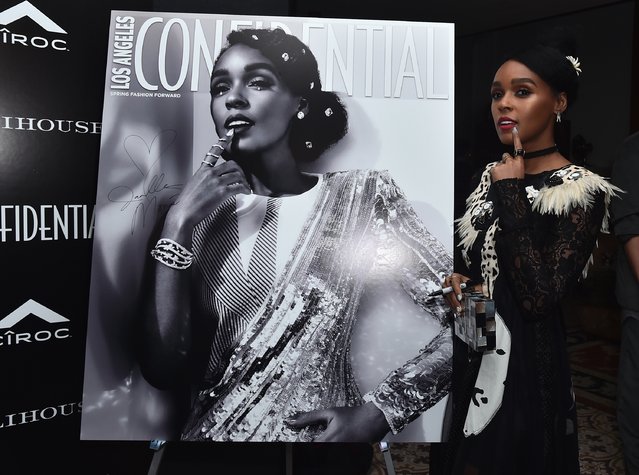