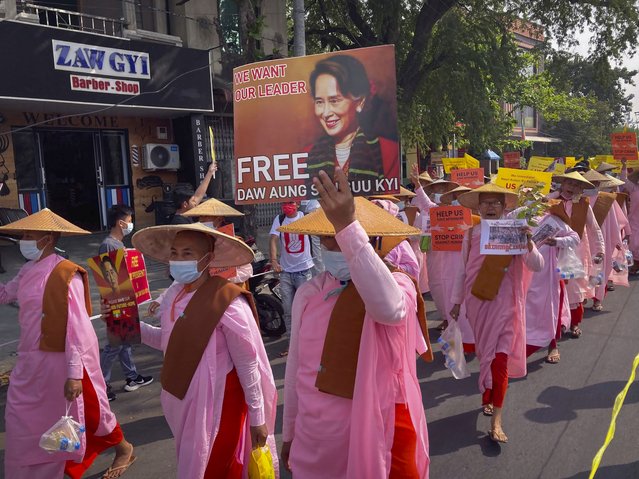 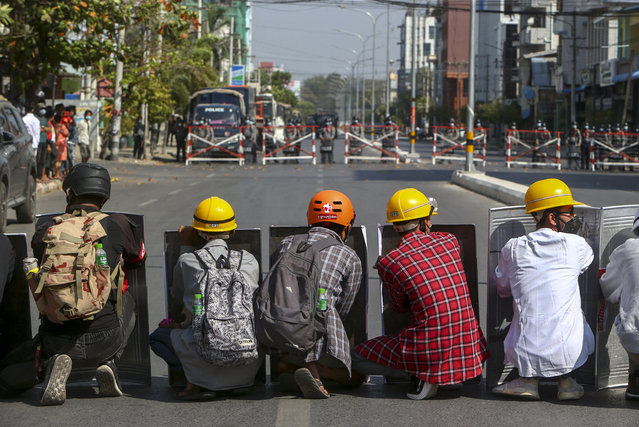 Anti-coup protesters and riot policemen face off in Mandalay, Myanmar, Wednesday, February 24, 2021. Protesters against the military's seizure of power in Myanmar were back on the streets of cities and towns on Wednesday, days after a general strike shuttered shops and brought huge numbers out to demonstrate. (Photo by AP Photo/Stringer) 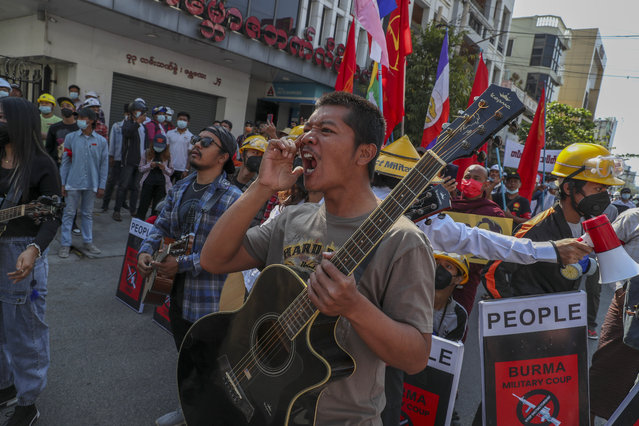 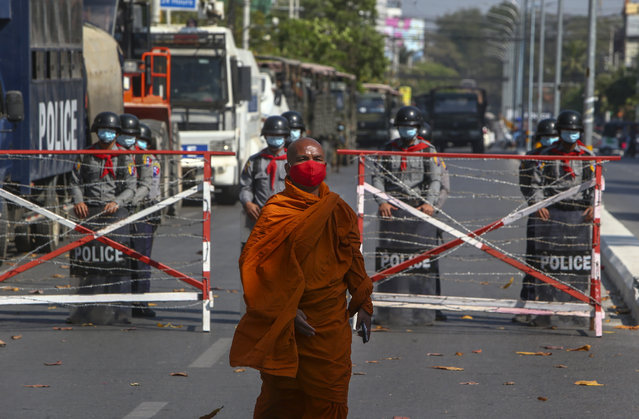 A Buddhist monk walks along a road as police stand watch in Mandalay, Myanmar, Wednesday, February 24, 2021. (Photo by AP Photo/Stringer) 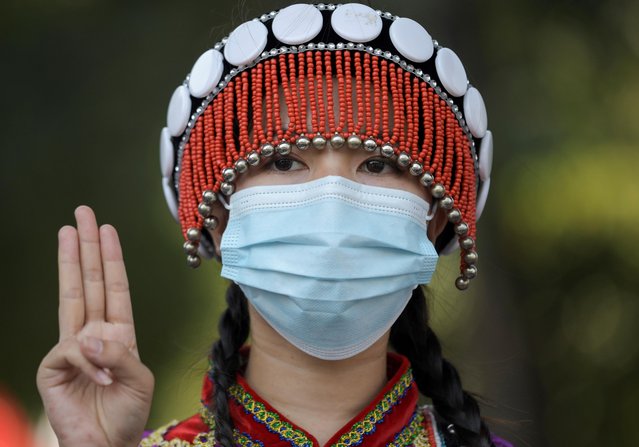 A protester makes the three finger salute during the demonstration in Yangon, Myanmar, February 24, 2021. A massive crowd took to the streets of Yangon to protest against the military coup and demanded the release of Aung San Suu Kyi. Myanmar's military detained State Counsellor of Myanmar Aung San Suu Kyi on February 01, 2021 and declared a state of emergency while seizing the power in the country for a year after losing the election against the National League for Democracy (NLD). (Photo by Reuters/Stringer) 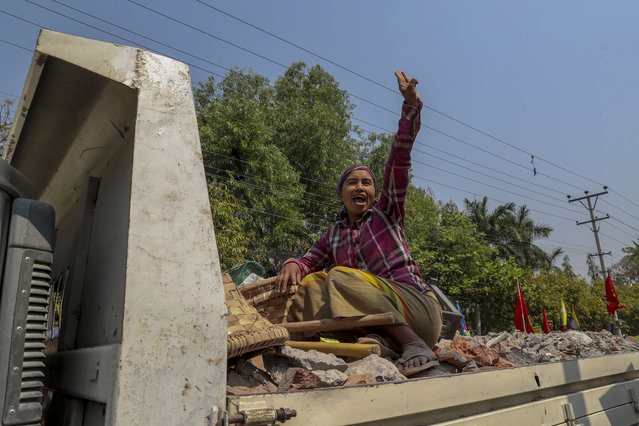 A woman traveling in the back of a truck greets anti-coup protesters with the three-fingered salute in Mandalay, Myanmar, Thursday, February 25, 2021. Social media giant Facebook announced Thursday it was banning all accounts linked to Myanmar's military as well as ads from military-controlled companies in the wake of the army's seizure of power on Feb. 1. (Photo by AP Photo/Stringer) 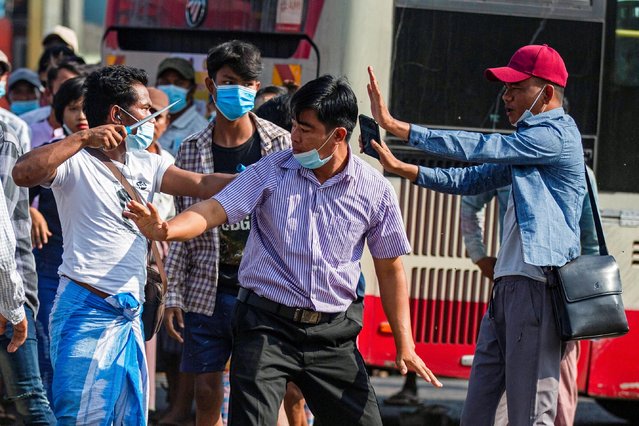 A military supporter points a sharp object as he confronts pro-democracy protesters in Yangon, Myanmar, February 25, 2021. Supporters of Myanmar's military, some armed with knives and clubs, others firing catapults and throwing stones, attacked opponents of the Feb. 1 coup, as protests against the new junta continued in the country's largest city. (Photo by Reuters/Stringer) 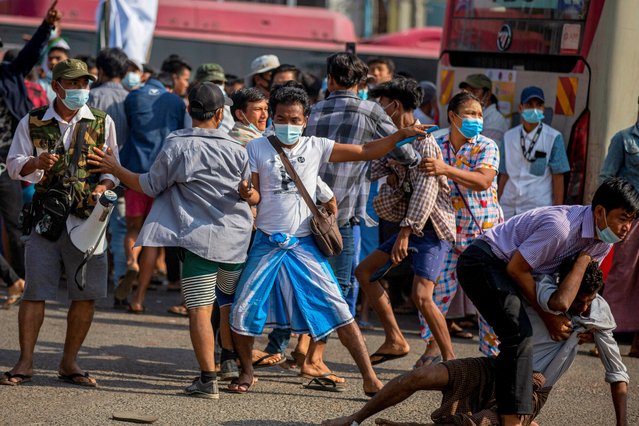 A military supporter points a sharp object as he confronts pro-democracy protesters during a military support rally in Yangon, Myanmar, February 25, 2021. Supporters of the military junta that staged a coup against Aung San Suu Kyi's National League for Democracy (NLD) government marched in Yangon on Thursday. Some supporters carried knives and other weapons, and clashed with residents who support the deposed NLD. They also attacked members of the media, local news reports said. (Photo by Reuters/Stringer) 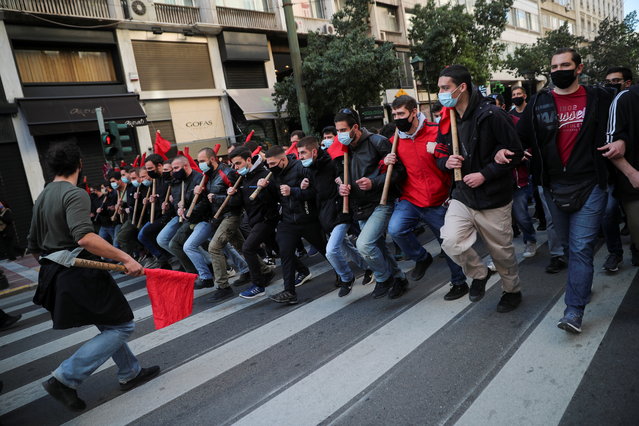 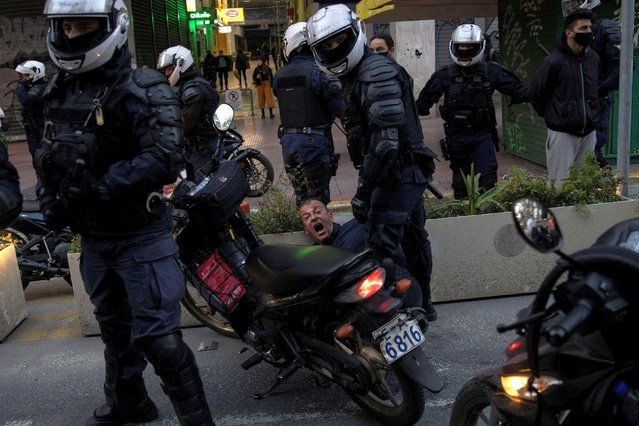 A protester shouts slogans as he is detained following clashes during a demonstration in solidarity with a member of the disbanded leftist November 17 militant group, Dimitris Koufodinas, who is on hunger strike, in Athens, Greece, February 24, 2021. (Photo by Alkis Konstantinidis/Reuters) 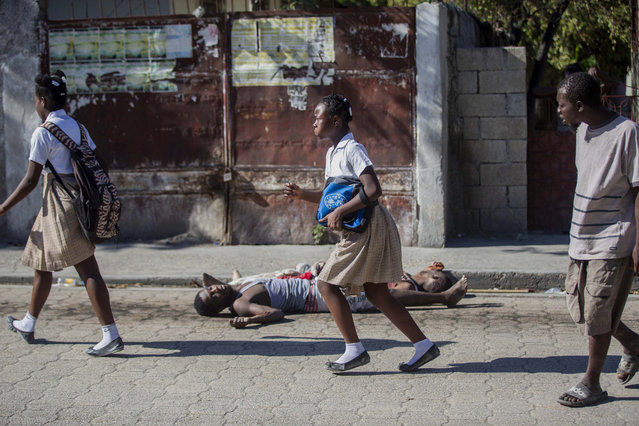 Students rush past the bodies of inmates outside the Croix-des-Bouquets Civil Prison after an attempted breakout, in Port-au-Prince, Haiti, Thursday, February 25, 2021. At least seven people were killed and one injured on Thursday after eyewitnesses told The Associated Press that several inmates tried to escape from a prison in Haiti’s capital. (Photo by Dieu Nalio Chery/AP Photo) 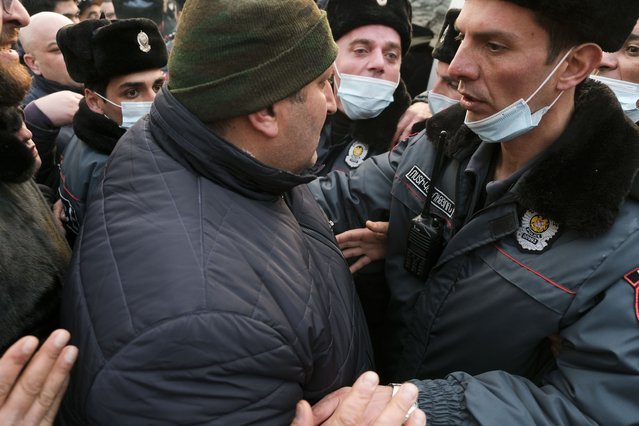 A demonstrator argues with a police officer during an opposition rally to pressure Armenian Prime Minister Nikol Pashinyan to resign in the center of Yerevan, Armenia, Thursday, February 25, 2021. Armenia's prime minister has spoken of an attempted military coup after facing the military's General Staff demand to step down. The developments come after months of protests sparked by the nation's defeat in the Nagorno-Karabakh conflict with Azerbaijan. (Photo by Hrant Khachatryan/PAN Photo via AP Photo) 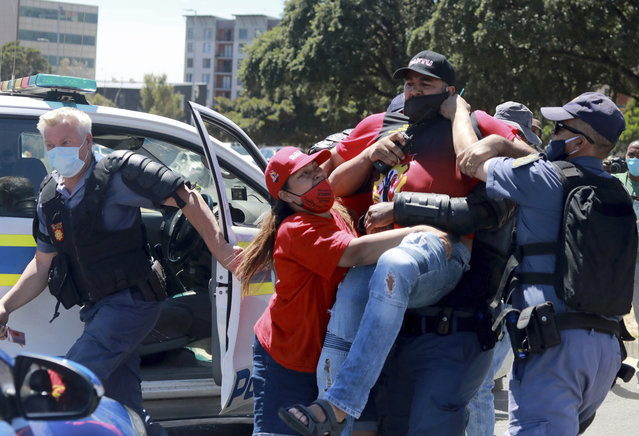 Protesters clash with police at the start of a planned march to Parliament in Cape Town, South Africa, as police stop all protests before they reach parliament Wednesday, February 24, 2021. Various groups planned to protest during Finance Minister Tito Mboweni's 2021 Budget Speech. (Photo by Nardus Engelbrecht/AP Photo) 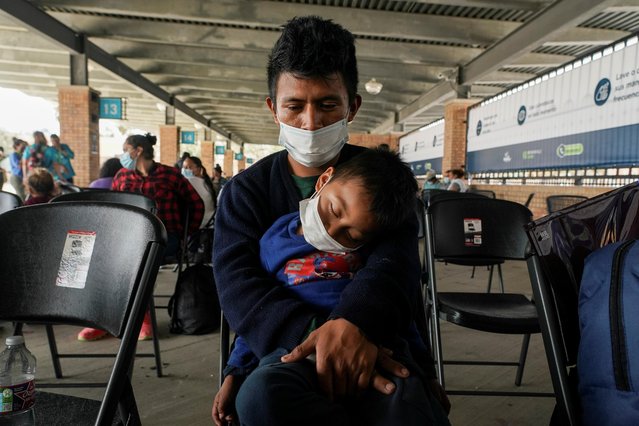 A migrant who crossed Gateway International Bridge from Mexico side to be processed to seek asylum in the U.S., waits with a child at a bus terminal to head to their destination, in Brownsville, Texas, February 25, 2021. The first asylum seekers from a Mexican border camp that had become a symbol of Trump era immigration restrictions entered the United States on Thursday under a new policy meant to end the hardships endured by migrants in dangerous border towns. (Photo by Go Nakamura/Reuters) 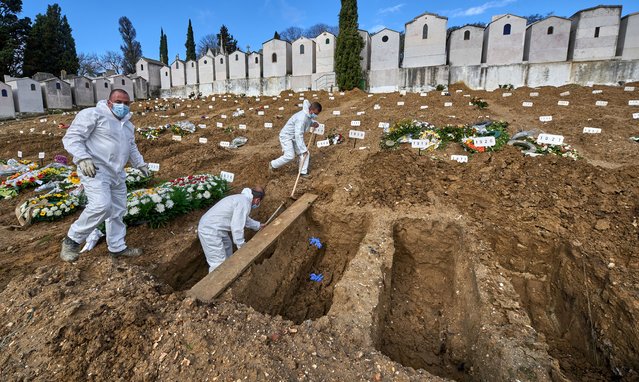 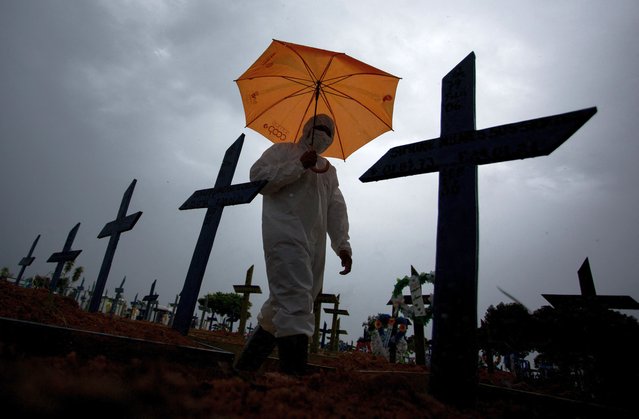 A workers wearing a protective suit and carrying an umbrella walks past the graves of COVID-19 victims at the Nossa Senhora Aparecida cemetery, in Manaus, Brazil, on February 25, 2021. Brazil surpassed 250,000 deaths due to COVID-19. (Photo by Michael Dantas/AFP Photo) 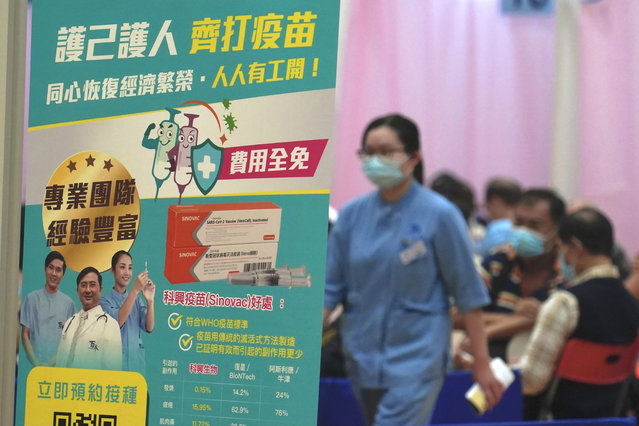 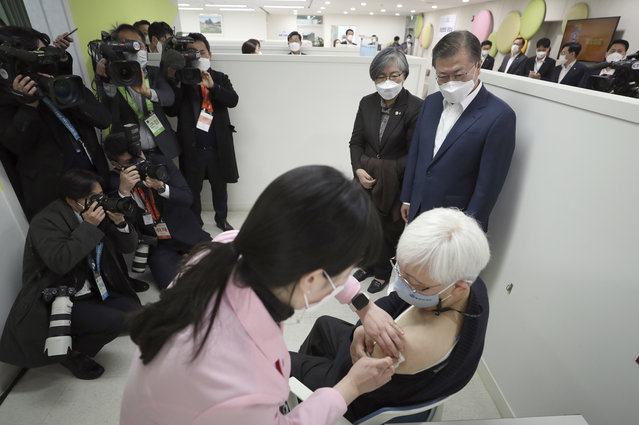 South Korean President Moon Jae-in, top right, watches a doctor receives a shot of AstraZeneca vaccine at a public health center in Seoul, South Korea, Friday, February 26, 2021. South Korea on Friday administered its first available shots of coronavirus vaccines to people at long-term care facilities, launching a mass immunization campaign that health authorities hope will restore some level of normalcy by the end of the year. (Photo by Choe Jae-koo/Yonhap via AP Photo) 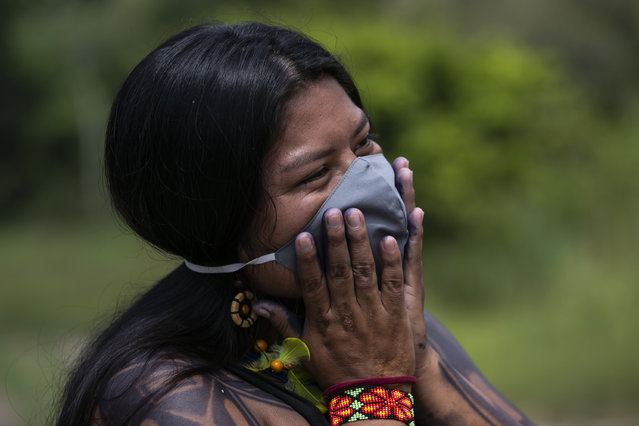 Suzana, a 22-year-old Guarani woman, smiles during an interview in the Mata Verde Bonita village in Marica, Rio de Janeiro state, Brazil, Thursday, February 25, 2021, where healthcare workers are making the rounds with coolers containing doses of China's Sinovac COVID-19 vaccine as part of a mass immunization program aimed at inoculating all of Rio’s 16 million residents by the end of the year. (Photo by Bruna Prado/AP Photo) 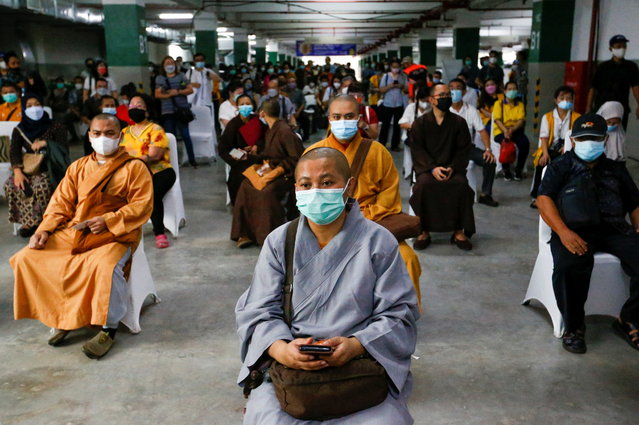 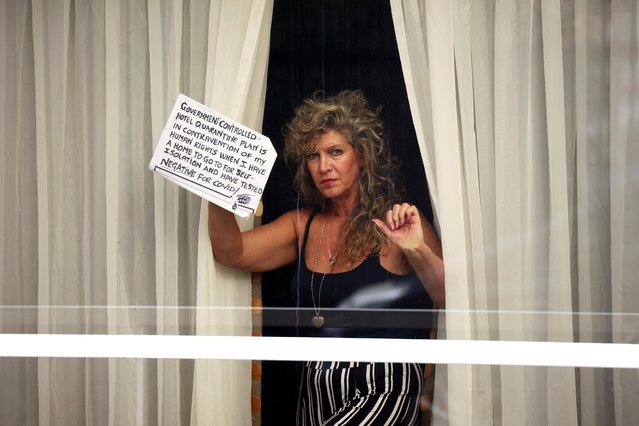 A woman holds a sign at a window of the Radisson Blu Hotel at Heathrow Airport, as Britain introduces a hotel quarantine programme for arrivals from a “red list” of 30 countries due to the coronavirus pandemic, in London, Britain, February 25, 2021. Britain says the measures are needed to protect its COVID-19 vaccination program and guard against new coronavirus variants. (Photo by Henry Nicholls/Reuters) 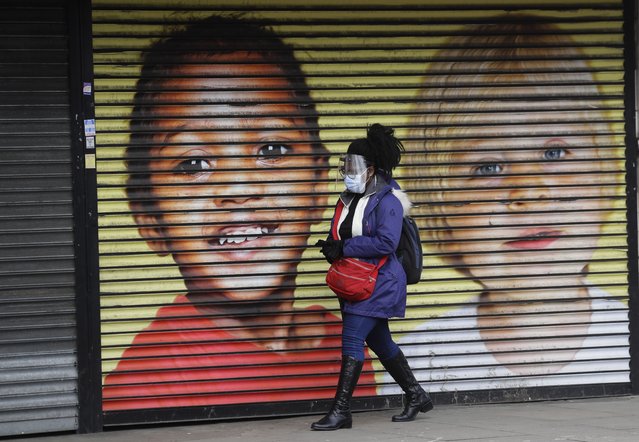 A woman wears protective face coverings as she passes the shutters of a closed shop in West Ealing in London, Thursday, February 25, 2021. It has been announced that further testing of residents in the London Borough of Ealing will be carried out after additional cases of the coronavirus variant first identified in South Africa were detected. (Photo by Kirsty Wigglesworth/AP Photo) 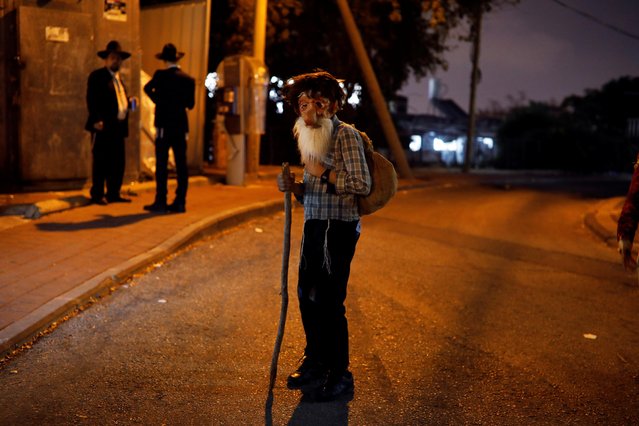 A youth wearing a dress-up costume marking the Jewish holiday of Purim, a celebration of the Jews' salvation from genocide in ancient Persia, amid the coronavirus disease (COVID-19) crisis, stands in a street in Bnei Brak, near Tel Aviv, Israel on February 25, 2021. (Photo by Nir Elias/Reuters) 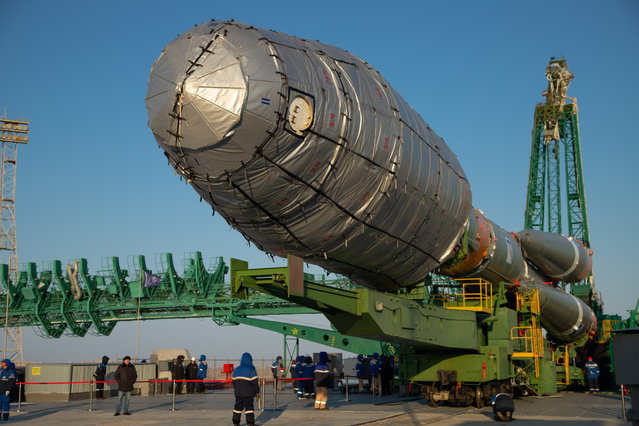 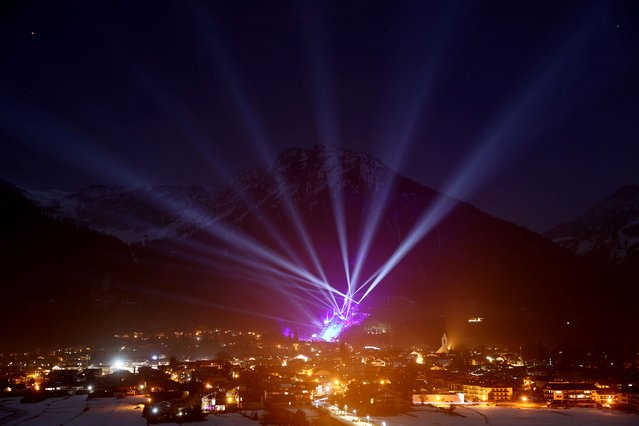