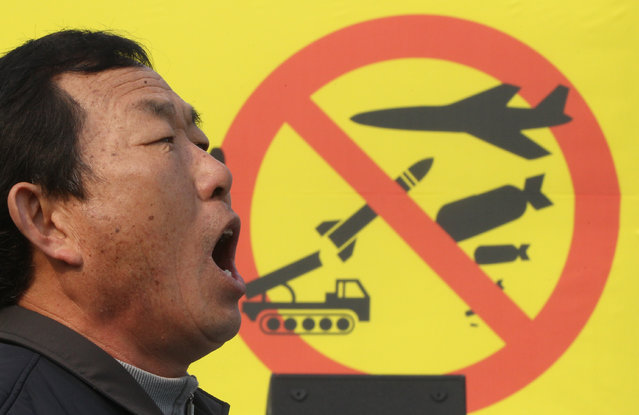 A South Korean anti-war protester yells during a rally demanding a restart of six-party talks and to stop the sanction near the government complex in Seoul, South Korea, Saturday, February 27, 2016. The United States on Thursday introduced a draft U.N. Security Council resolution that it said will significantly increase pressure on North Korea in response to its latest nuclear test and rocket launch. (Photo by Ahn Young-joon/AP Photo) 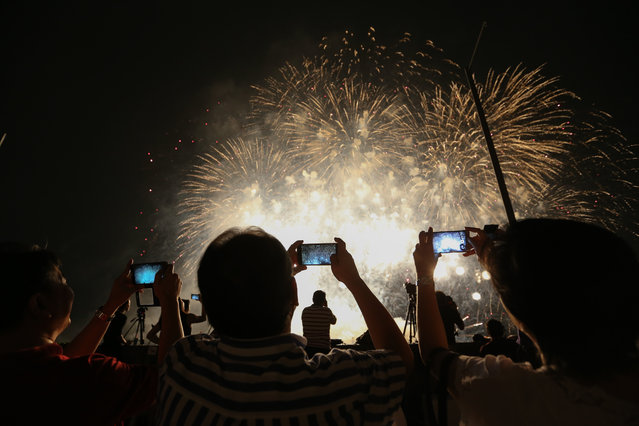 Filipino spectators watch fireworks display by the team from the Netherlands during the seventh Philippine International Pyromusical Competition in Pasay City, south of Manila, Philippines, February 27, 2016. Teams specialized in pyrotechnics from the Philippines, Portugal, Italy, Britain, the USA, the Netherlands, Germany, Canada, Australia, China and France are participating in the weekend fireworks show which will run until March 2016. (Photo by Mark R. Cristino/EPA) 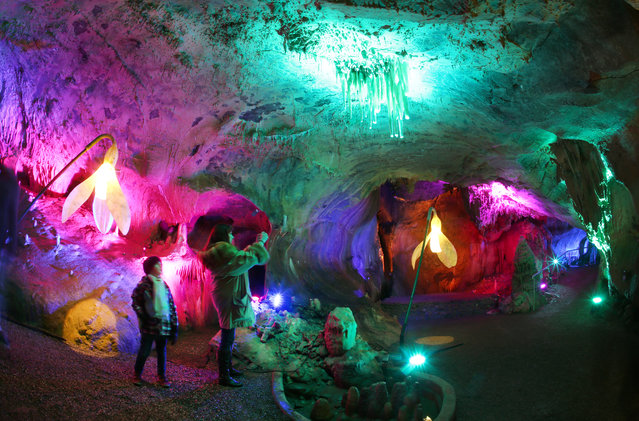 A visitor takes a picture of the illuminated Dechen Cave in Iserlohn, Germany, February 27, 2016. The “2016 Cave Lights” event will showcase light installations featuring stalactite and stalagmite formations in the Dechen Cave until March 25. (Photo by Ina Fassbender/EPA) 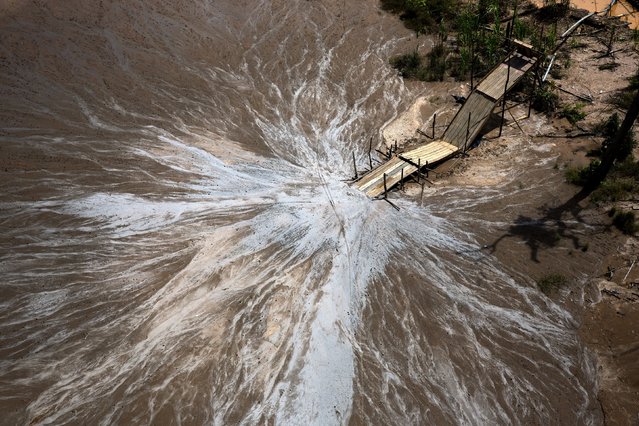 This view from a police helicopter shows a “tolba”, a sluice-like apparatus layered with pieces of carpet to capture gold deposits from water sediment, during a Wednesday, February 24, 2016 government raid to destroy illegal gold mining operations in the deforested area known as La Pampa in Peru's Madre de Dios region. This week's raid was one of the biggest of more than 60 operations the government has launched since 2014 when wildcat mining was outlawed. (Photo by Rodrigo Abd/AP Photo) 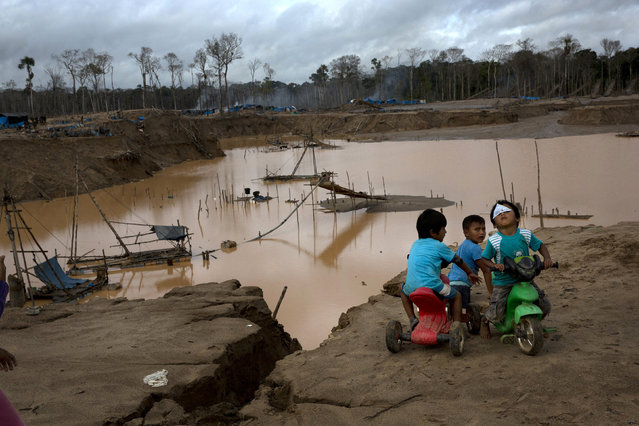 In this Tuesday, February 23, 2016 photo, children play next to a crater, created by gold mining, during a government raid to dismantle the illegal wildcat operation in La Pampa, in Peru's Madre de Dios region. Wildcat mining, which became illegal in 2014, has been ravaging pristine jungle and contaminating it with tons of mercury. (Photo by Rodrigo Abd/AP Photo) 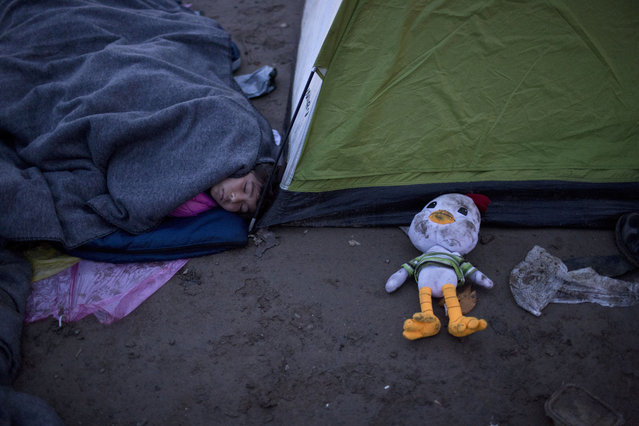 A girl sleeps on a field next to a tent as she and her family wait to be allowed to cross the Greek-Macedonian border near the northern Greek village of Idomeni, Saturday, February 27, 2016. Greek officials said not a single migrant has been allowed into northern neighbor Macedonia Friday, with nearly 5,000 people waiting at or near a border crossing to be admitted. More than 20,000 migrants are stuck in Greece. (Photo by Petros Giannakouris)/AP Photo 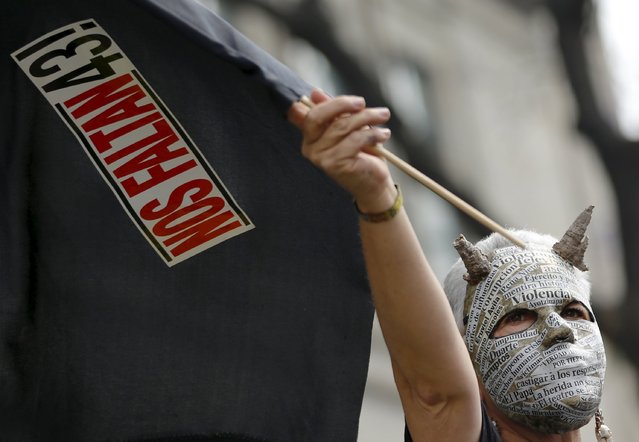 An activist holds up a flag with a poster as she takes part in a demonstration to mark the 17-month anniversary of the disappearance of the 43 missing students of Ayotzinapa College Raul Isidro Burgos, outside the Supreme Court building in Mexico City, Mexico February 26, 2016. The students disappeared on the night of September 26, 2014 in the southwestern city of Iguala. The words reads, “We are missing 43”. (Photo by Henry Romero/Reuters) A surfer rides a wave during large surf conditions at Sydney's Bronte Beach, Australia, February 27, 2016. The east coast of Australia is currently experiencing dangerous surf conditions due to large swells as a result of Cyclone Winston, which battered the Pacific Island nation of Fiji last week, local media reported. (Photo by David Gray/Reuters) 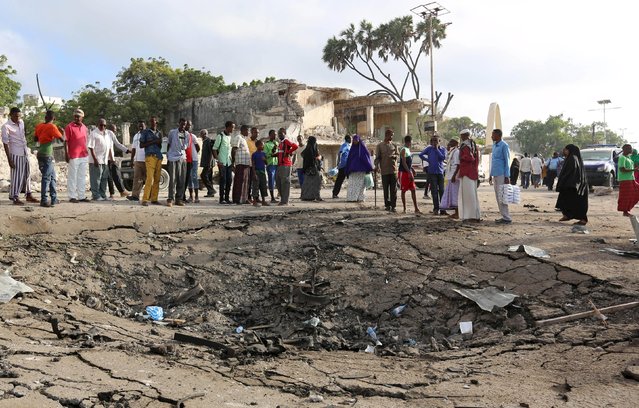 Residents gather at the scene of a car bomb attack near Somali Youth League Hotel, known as SYL hotel, in Hamarweyne district in Mogadishu, Somalia February 27, 2016. At least nine people were killed when fighters from Somali Islamist group al Shabaab set off a car bomb at the gate of a popular park and near the hotel in the capital, sending a plume of smoke above the coastal city. (Photo by Feisal Omar/Reuters) 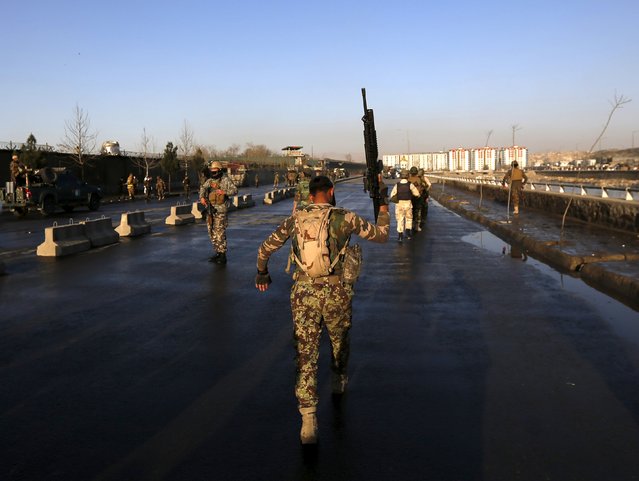 An Afghan security forces holds up his rifle as he walks at the site of an attack in Kabul, Afghanistan February 27, 2016. A loud explosion rocked the Afghan capital Kabul near the defence ministry on Saturday, hours after a suicide bomber killed at least 11 people in the eastern province of Kunar. (Photo by Mohammad Ismail/Reuters) 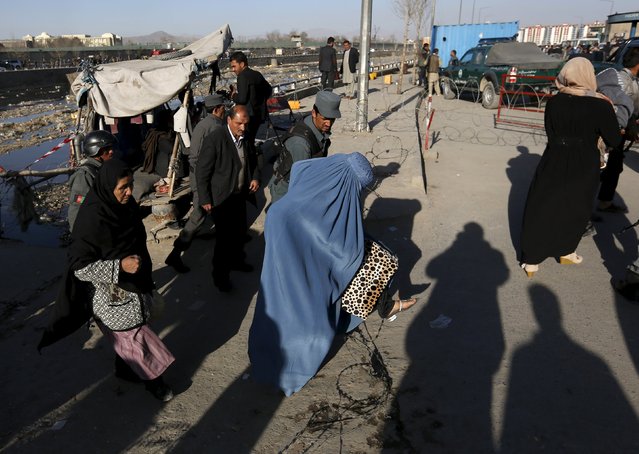 A woman walks on a road blocked near the site of a suicide attack in Kabul, Afghanistan February 27, 2016. (Photo by Mohammad Ismail/Reuters) 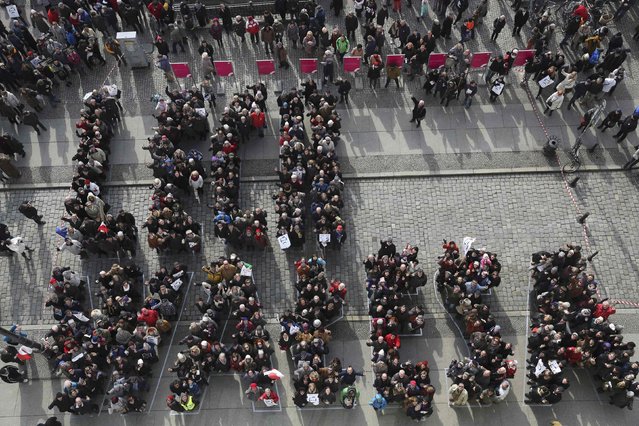 People form the name of former president Lech Walesa during a demonstration in Wroclaw, Poland February 27, 2016. Poles protested on Saturday against the ruling Law and Justice (PiS) party and the government's recent accusations of Lech Walesa collaborating with the communist-era secret services. (Photo by Mieczyslaw Michalak/Reuters/Agencja Gazeta) 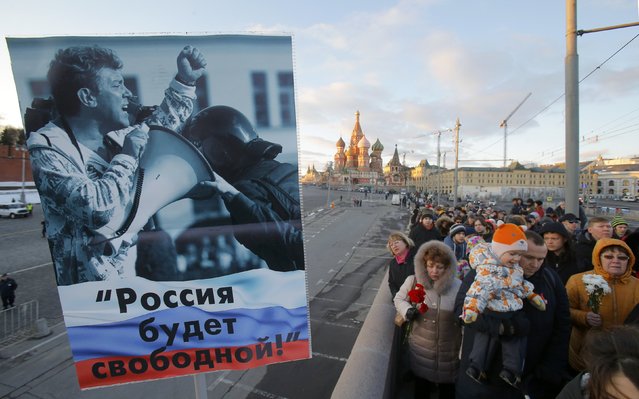 People visit the site of the murder of Russian opposition politician Boris Nemtsov on the first anniversary of his death, with St. Basil's Cathedral seen in the background, in central Moscow, Russia, February 27, 2016. The placard reads “Russia will be free!”. (Photo by Maxim Shemetov/Reuters) 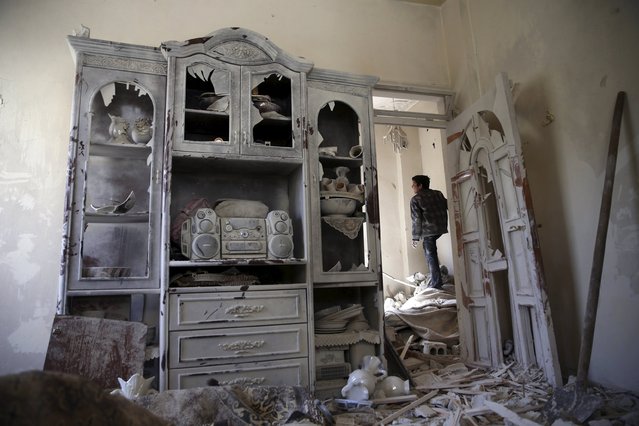 A boy inspects a damaged house in the rebel held besieged city of Douma, a suburb of Damascus, Syria February 27, 2016. (Photo by Bassam Khabieh/Reuters) 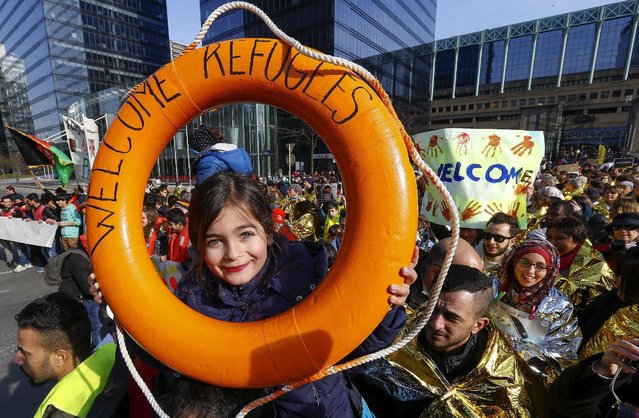 People take part in a rally asking for a change in the refugee policy in Europe as part of an international initiative in favour of better living conditions of migrants, in Brussels, Belgium February 27, 2016. (Photo by Yves Herman/Reuters) 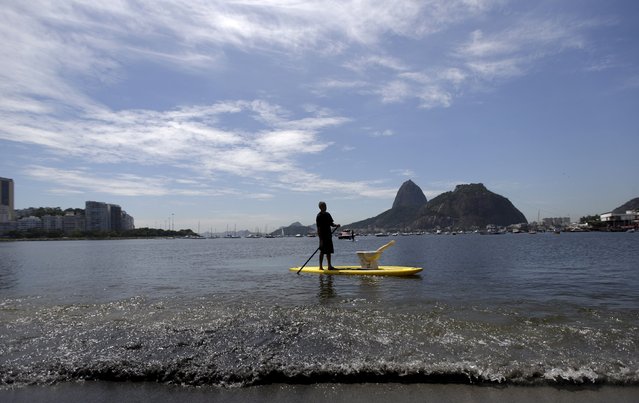 A man paddles his stand-up board at Botafogo Beach, located in Guanabara Bay, during a protest to call attention to pollution in its waters, where the Rio 2016 Olympic Games sailing events will take place in Rio de Janeiro, Brazil, February 27, 2016. (Photo by Ricardo Moraes/Reuters) A Lhasa Apso sits in a bath with petals during a spa treatment for dogs at Gama Pet pet store at the Cidade Jardim mall in Sao Paulo, Brazil, February 24, 2016. (Photo by Nacho Doce/Reuters) 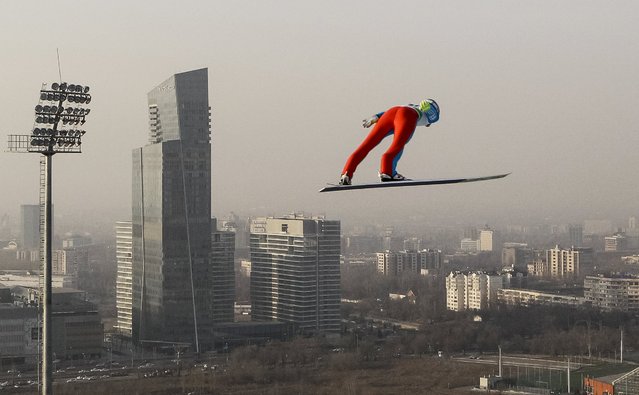 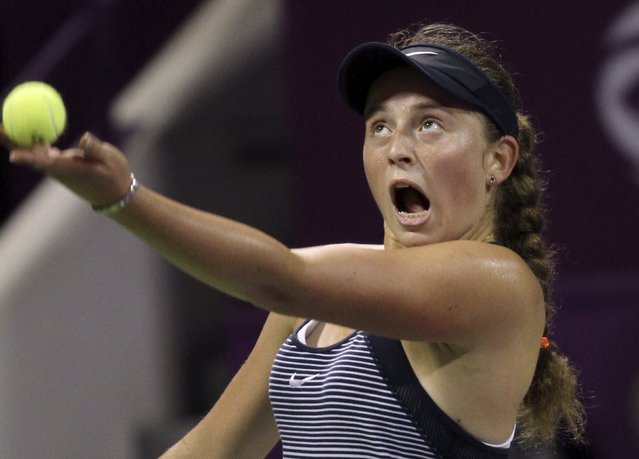 Jelena Ostapenko of Latvia serves to Carla Suarez Navarro of Spain during their women's final match at the Qatar Open tennis tournament, in Doha February 27, 2016. (Photo by Naseem Zeitoon/Reuters) 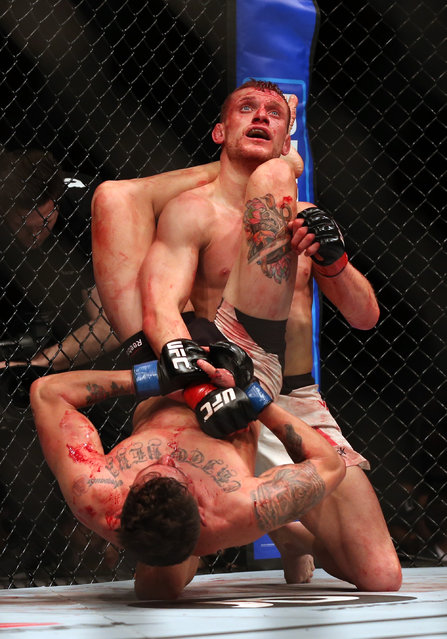 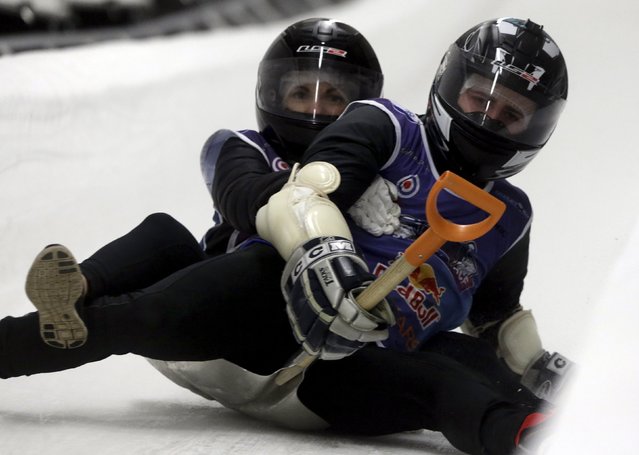 People take part in a shovel race event on the luge and bobsleigh track in Sigulda, Latvia, February 27, 2016. (Photo by Ints Kalnins/Reuters) 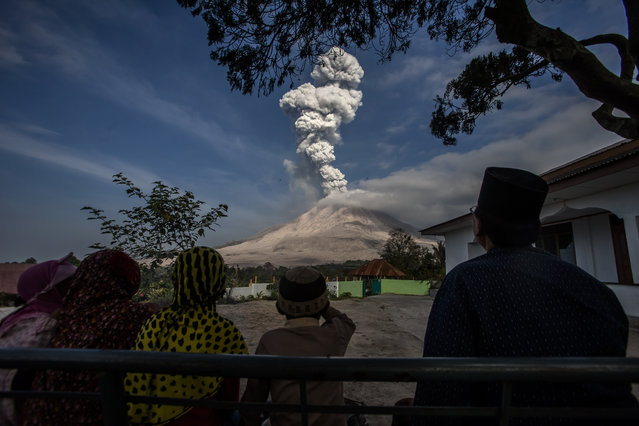 Residents watch volcanic smoking and ashes rising from Mount Sinabung during an eruption in Karo, North Sumatra, Indonesia, February 24, 2016. Authorities have repeatedly called on local residents to remain patient in dealing with the impact of Sinabung's eruptions, which some experts have predicted will continue for five more years. (Photo by Xinhua/Barcroft Media) 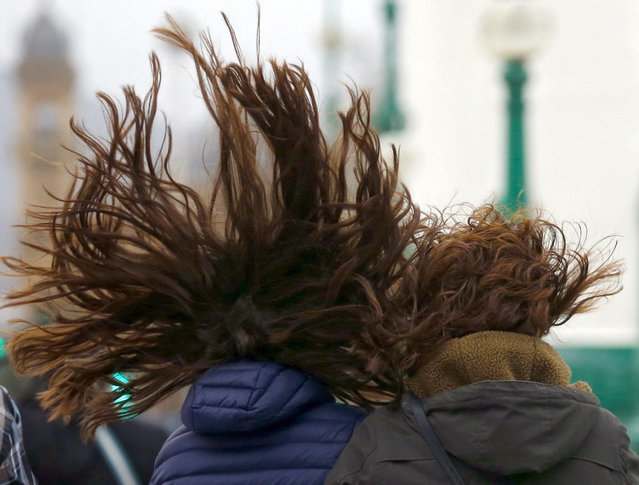 Two women walk with their fly-away hair during a windy day in San Sebastian, the Basque Country, northern Spain, 27 February 2016. The Iberian Peninsula is under a spell of rough weather with strong winds and snow level rising in the north and centre of the country. (Photo by Juan Herrero/EPA)
Edit Del
28 Feb 2016 11:36:00, post received 0 comments
Publication archive:
←   →
Popular tags:
All tags
Last searches: