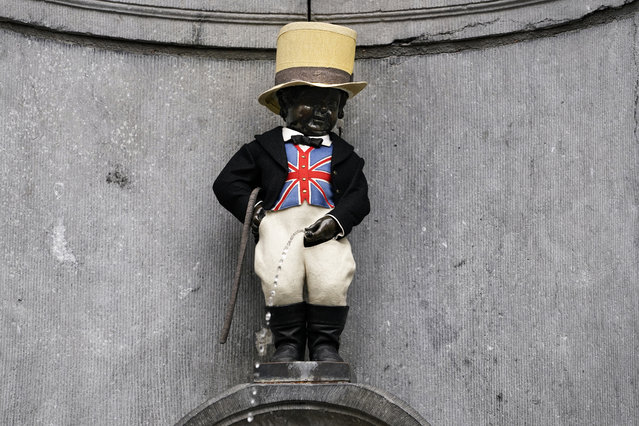 A picture taken on January 30, 2020 shows the Belgium landmark Manneken-Pis statue wearing a Union Jack flag waiscoast and a top hat to mark the departure of the United Kingdom from the European Union, in Brussels. Britain is set to leave the European Union at 2300 GMT on January 31, 2020, 43 months after Britons voted in the June 2016 referendum to leave the EU, ending more than four decades of economic, political and legal integration with its closest neighbours (Photo by Kenzo Tribouillard/AFP Photo) 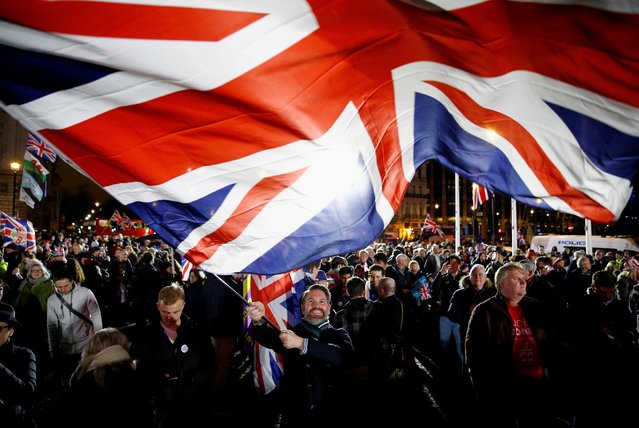 A man waves a British flag on Brexit day in London, Britain January 31, 2020. The United Kingdom leaves the European Union, its most significant change of course since the loss of its empire – and a major blow to 70 years of efforts to forge European unity from the ruins of two world wars. (Photo by Henry Nicholls/Reuters) 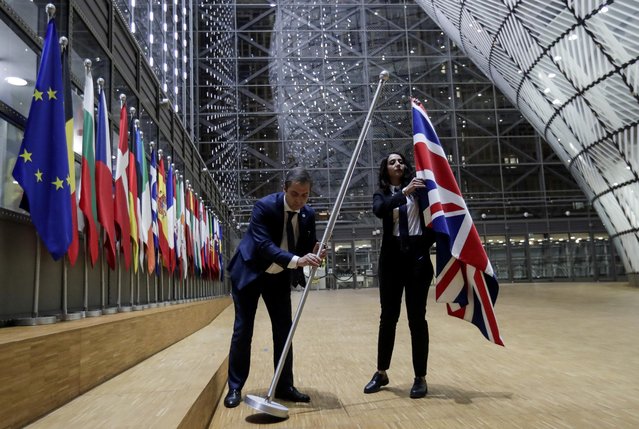 Officials remove the British flag at European Union Council in Brussels, Belgium on January 31, 2020. (Photo by Olivier Hoslet/Pool via Reuters) 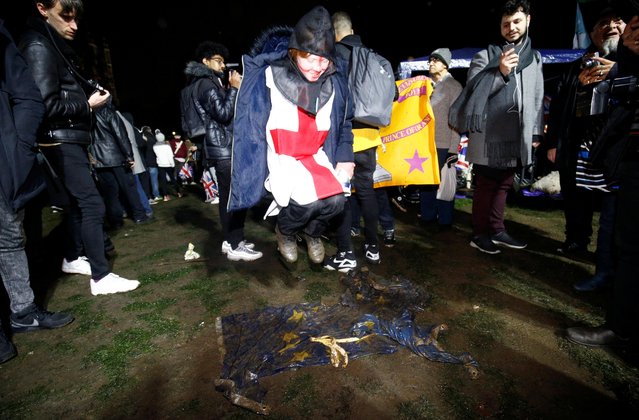 A person jumps over the European Union flag lying on the ground and covered with a mud on Brexit day in London, Britain on January 31, 2020. (Photo by Henry Nicholls/Reuters) 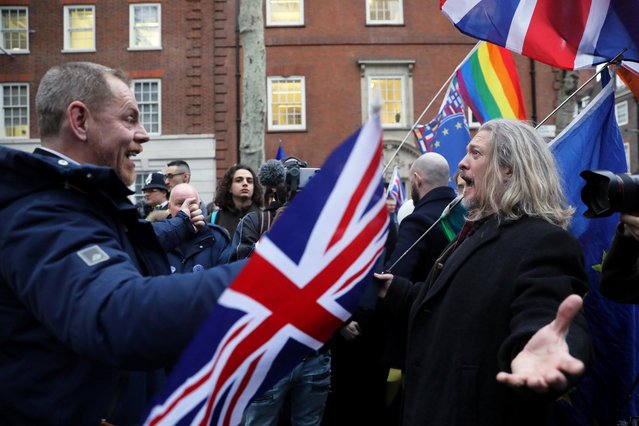 A pro-Brexit supporter (L) and anti-Brexit demonstrator interact outside Europe House on Brexit day in London, Britain on January 31, 2020. (Photo by Simon Dawson/Reuters) 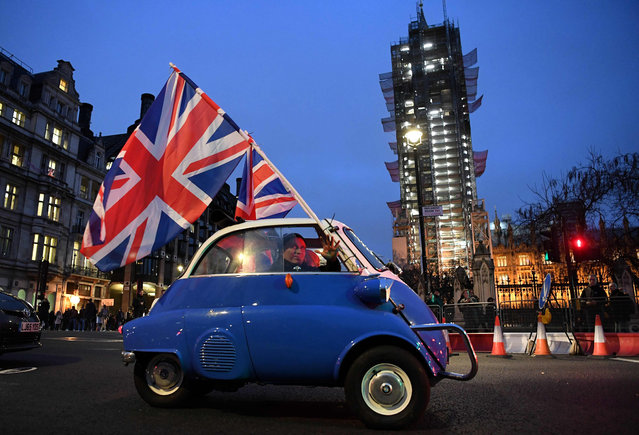 A man waves Union flags from a small car as he drives past Brexit supporters gathering in Parliament Square, near the Houses of Parliament in central London on January 31, 2020 on the day that the UK formally leaves the European Union. Britain on January 31 ends almost half a century of integration with its closest neighbours and leaves the European Union, starting a new – but still uncertain – chapter in its long history. (Photo by Daniel Leal-Olivas/AFP Photo) 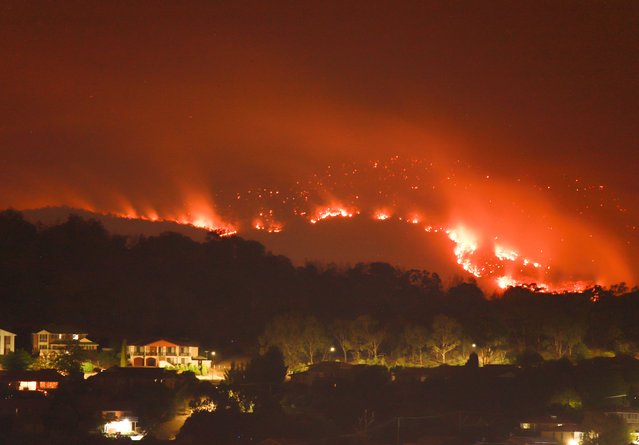 Photo taken on January 31, 2020 shows a bushfire in the Orroral Valley, south of Canberra, Australia. Authorities have declared a bushfire state of emergency in the Australian Capital Territory (ACT). ACT Chief Minister Andrew Barr announced the state of the emergency on Friday. It marks the first time a state of emergency has been declared in the territory since the 2003 bushfires that killed four people and destroyed almost 500 buildings. (Photo by Liu Changchang/Xinhua News Agency) 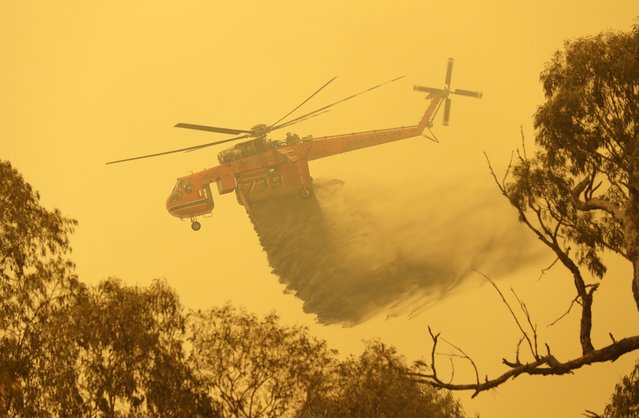 A helicopter drops water on a fire near Bumbalong, south of the Australian capital, Canberra, Saturday, February 1, 2020. The threat is posed by a blaze on Canberra's southern fringe that has razed more than 21,500 hectares (53,000 acres) since it was sparked by heat from a military helicopter landing light on Monday, the Emergency Services Agency said. (Photo by Rick Rycroft/AP Photo) 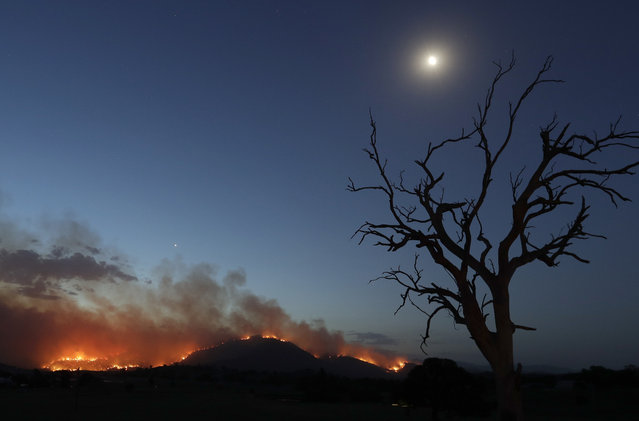 A wildfire threatening property glows at dusk near Clear Range, south of the Australian capital, Canberra, Friday, January 31, 2020. The threat is posed by a blaze on Canberra's southern fringe that has razed more than 21,500 hectares (53,000 acres) since it was sparked by heat from a military helicopter landing light on Monday, the Emergency Services Agency said. (Photo by Rick Rycroft/AP Photo) 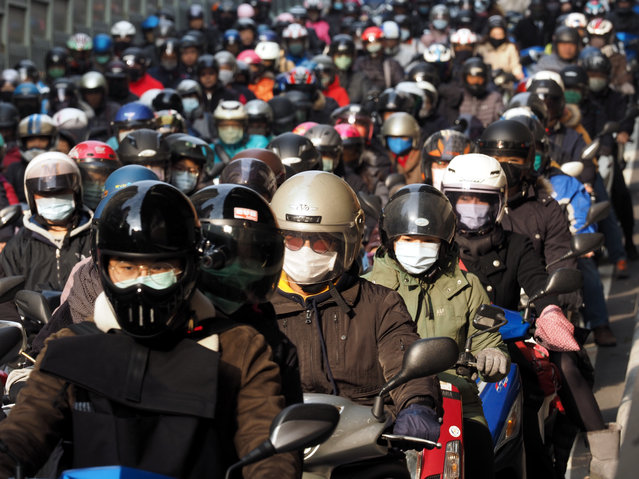 Taiwanese wearing face masks ride motorbikes in Taipei, Taiwan, 30 January 2020. The coronavirus, called 2019-nCoV, originating from Wuhan, China, has spread to all the 31 provinces of China as well as more than a dozen countries, including nine cases in Taiwan. The outbreak of coronavirus has so far claimed 170 lives and infected more than 8,000 others, according to media reports. (Photo by David Chang/EPA/EFE) 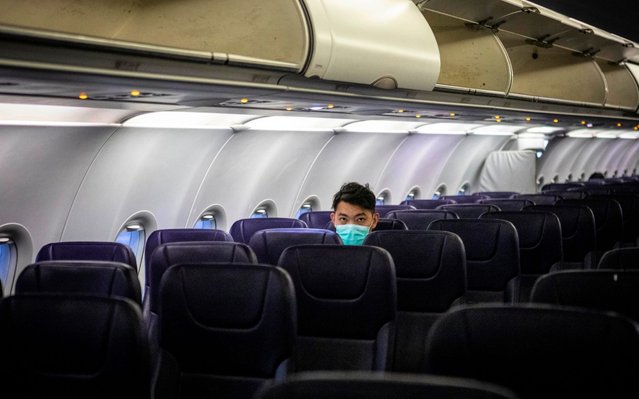 A passengers sits in a mostly empty airplane wearing protection mask against the coronavirus during the flight bound from Sihanoukville, Cambodia via Phnom Penh, Cambodia to Guangzhou, Guangdong Province, China, 01 February 2020. Guangzhou Airport, usually busy during the end of Spring Festival when Chinese travelers return to their homes, appeared deserted after many countries and international airlines suspended or limited flights to and from China, because of outbreak of coronavirus in Wuhan City. (Photo by Alex Plavevski/EPA/EFE/Rex Features/Shutterstock) 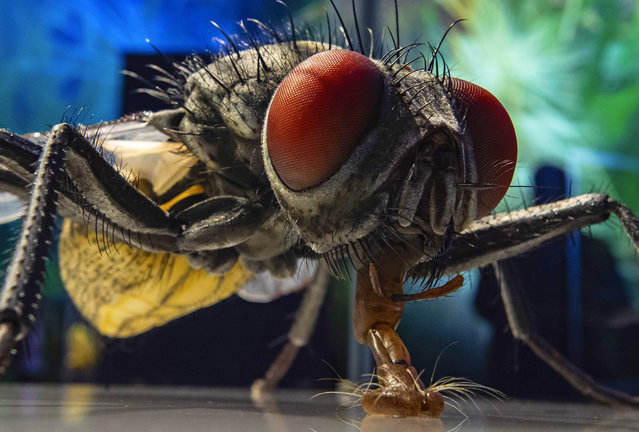 A visitor walks behind a giant 3d object of an common housefly by Julia Stoess during a press preview at the Leipzig asisi Panometer in Leipzig, Germany, Friday, January 31, 2020. The new three-dimensional objects, plants and animal specimens and oversized insect models are part of the monumental panoramic picture 'Carola's Garden - A Return to Paradise' of artist Yadegar Asisi. From the perspective of an insect, the work shows an allotment garden with huge flowers, wild and agricultural plants, birds and insects enlarged a hundred times. (Photo by Jens Meyer/AP Photo) 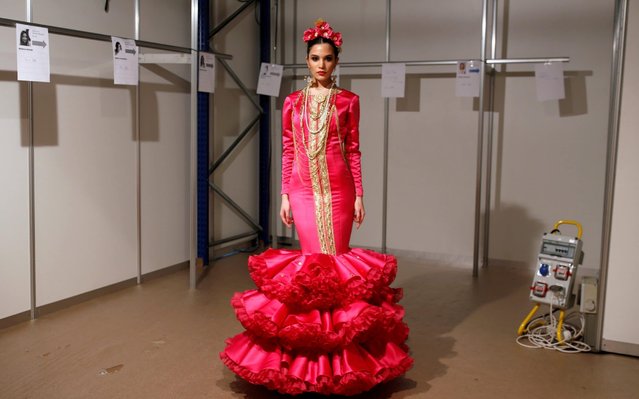 A model poses for a portrait backstage as she wears a creation by Calandria during the International Flamenco Fashion Show SIMOF in the Andalusian capital of Seville, Spain on February 1, 2020. (Photo by Marcelo del Pozo/Reuters) 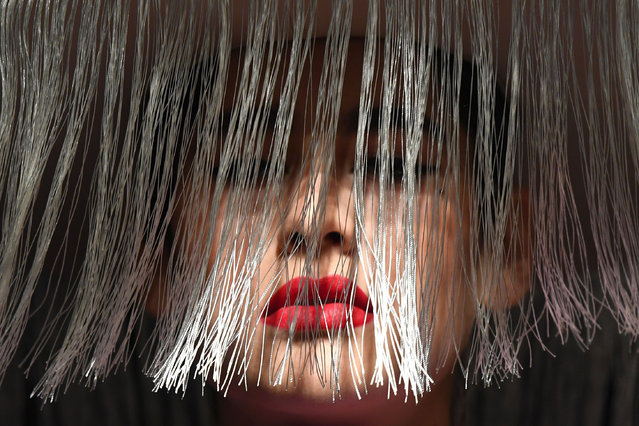