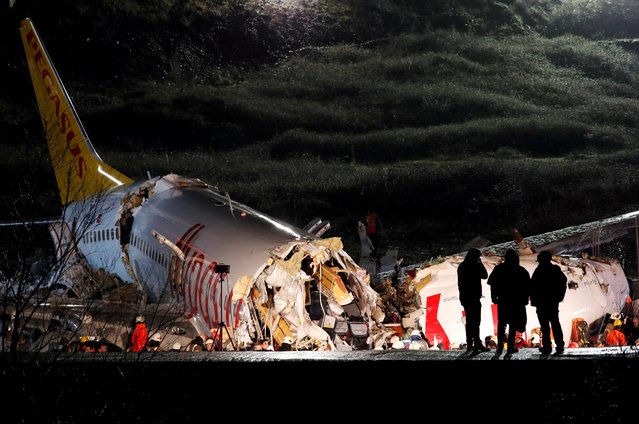 Police officers inspect the Pegasus Airlines Boeing 737-86J plane, that overran the runway during landing and crashed, at Istanbul's Sabiha Gokcen airport, Turkey February 5, 2020. The plane carrying 171 passengers from the Aegean port city of Izmir split into three after landing in rough weather. Officials said no-one had lost their lives in the accident, but dozens of people were injured. (Photo by Murad Sezer/Reuters) 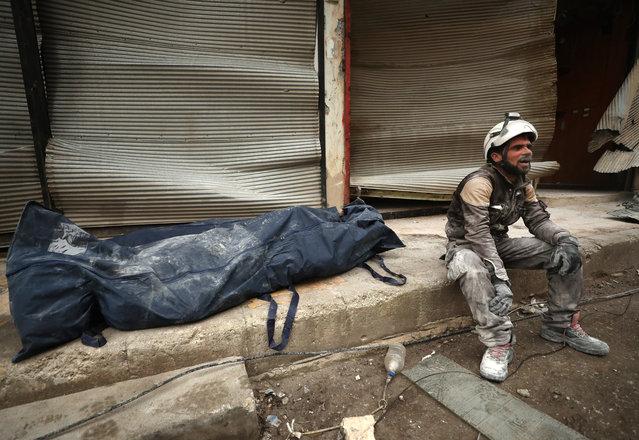 A member of the rescue workers known as the White Helmets sits near a body bag containing the body a victim uremoved from the rubble of a building, hit during an air strike by pro-regime forces on the rebel-held town of Ariha in the northern countryside of Syria's Idlib province, on February 5, 2020. Syrian regime forces pressed on with their offensive in the northwest that has displaced half a million people, despite heightened tensions with Turkey. Intensive aerial bombardment and ground fighting in the jihadist-dominated Idlib region since December have killed almost 300 civilians and triggered one of the largest waves of displacement in the nine-year war. (Photo by Omar Haj Kadour/AFP Photo) 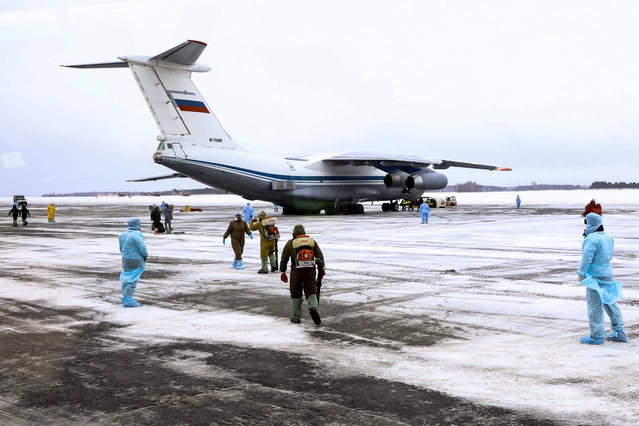 A group of medical personnel stands ready to control 80 people, accompanied by medical specialists, carried by a Russian military plane at an airport outside Tyumen, Russia, Wednesday, February 5, 2020. Russia has evacuated 144 people – Russians and nationals of Belarus, Ukraine and Armenia – from the epicenter of the coronavirus outbreak in Wuhan, China, on Wednesday. All evacuees will be quarantined for two weeks in a sanatorium in the Tyumen region in western Siberia, government officials said. (Photo by Maxim Slutsky/AP Photo) 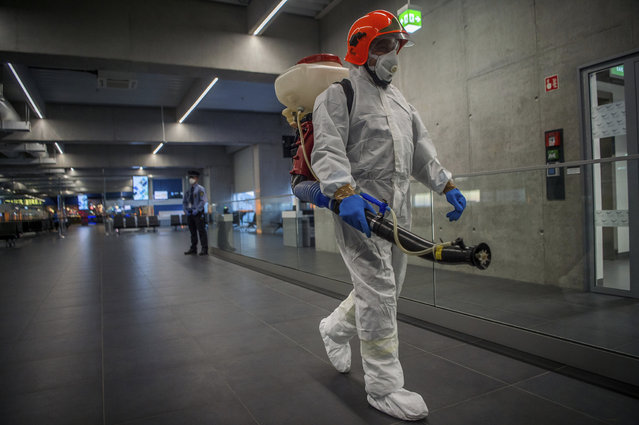 Disinfection equipment is carried by a worker as precautionary measures against the spreading of novel coronavirus, at Budapest Liszt Ferenc International Airport in Budapest, Hungary, Wednesday, February 5, 2020. So far almost 900 passenger arriving directly from China have been examined at the airport. (Photo by Zoltan Balogh/MTI via AP Photo) 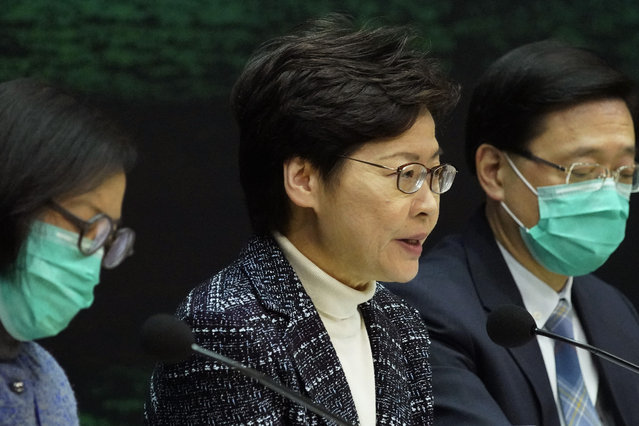 Hong Kong Chief Executive Carrie Lam, center, speaks during a press conference in Hong Kong Wednesday, February 5, 2020. In Hong Kong, hospitals workers are striking to demand the border with mainland China be shut completely to ward off the virus, but four new cases without known travel to the mainland indicate the illness is spreading locally in the territory. (Photo by Vincent Yu/AP Photo) 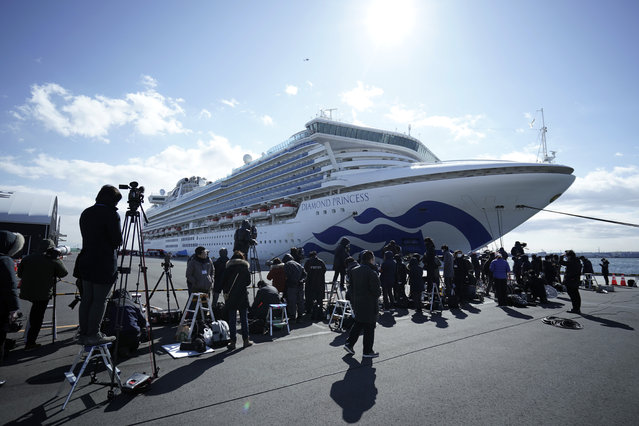 The cruise ship Diamond Princess is anchored at Yokohama Port for supplies replenished in Yokohama, south of Tokyo, Thursday, February 6, 2020. Health workers said 10 more people from the Diamond Princess were confirmed ill with the virus, in addition to 10 others who tested positive on Wednesday. They were dropped off as the ship docked and transferred to nearby hospitals for further test and treatment. (Photo by Eugene Hoshiko/AP Photo) 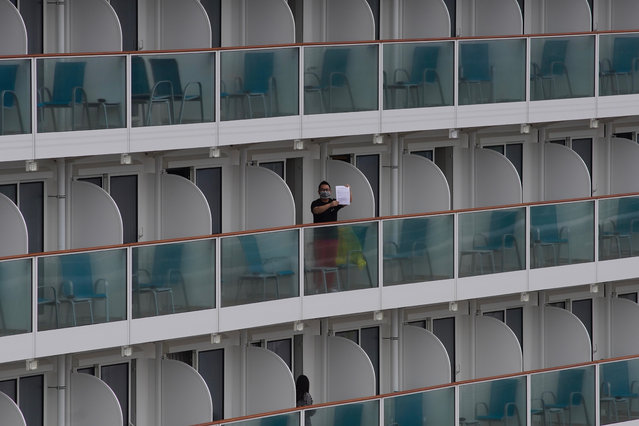 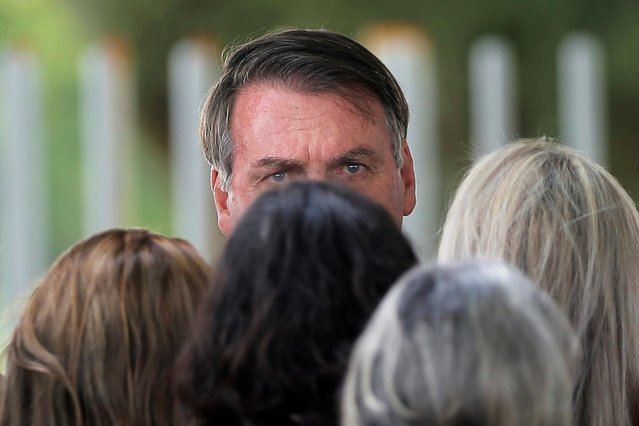 Brazil's President Jair Bolsonaro looks on as he leaves the Alvorada Palace in Brasilia, Brazil on February 4, 2020. (Photo by Adriano Machado/Reuters) 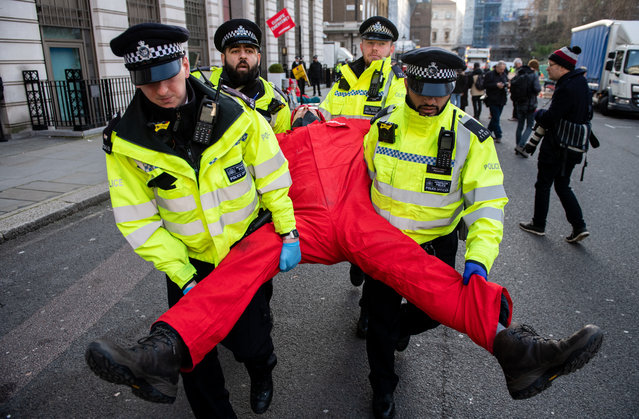 Greenpeace activists are arrested and cut out of chains whilst attempting to blockade the BP headquarters with solar panels, boards and activists locking themselves to oil drums on February 5, 2020 in London, England. Greenpeace started the blockade early in the morning ahead of the first day of work for the newly appointed BP CEO Bernard Looney. (Photo by Chris J. Ratcliffe/Greenpeace via Getty Images) 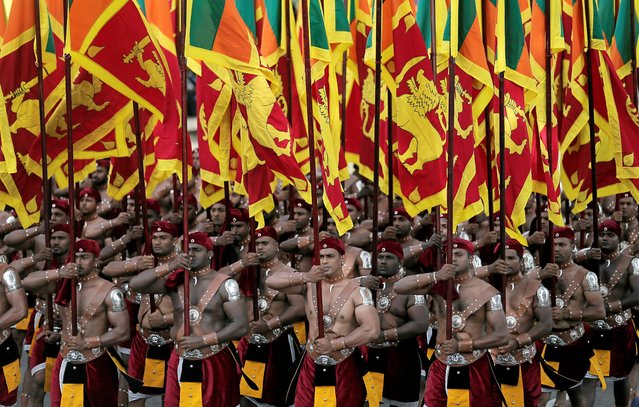 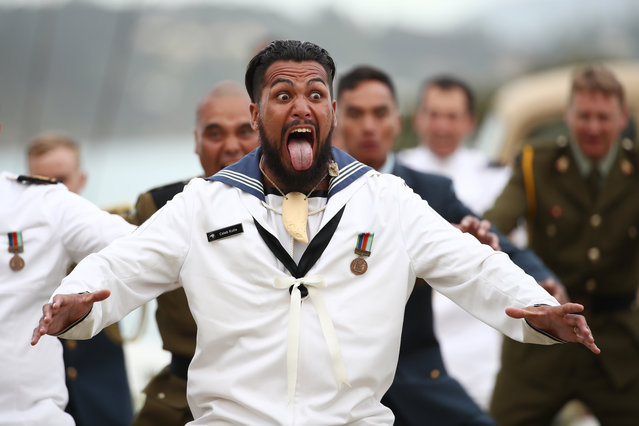 New Zealand Defence Force personal perform a haka during Te Rau Aroha, an evening to commemorate Maori service in the New Zealand Armed Forces on February 05, 2020 in Waitangi, New Zealand. The Waitangi Day national holiday celebrates the signing of the treaty of Waitangi on February 6, 1840 by Maori chiefs and the British Crown, that granted the Maori people the rights of British Citizens and ownership of their lands and other properties. (Photo by Fiona Goodall/Getty Images) 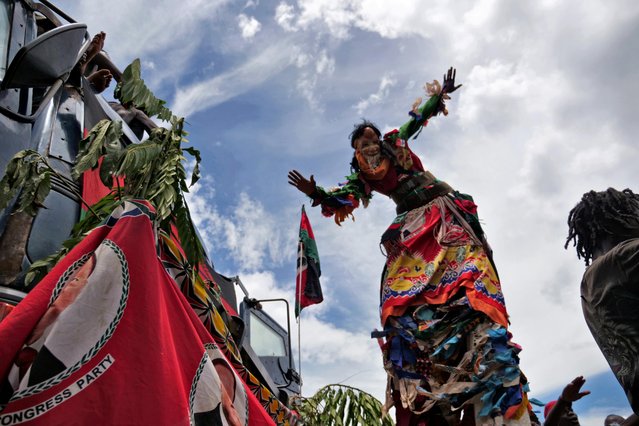 Opposition supporters celebrate after a court annulled the May 2019 presidential vote that declared Peter Mutharika a winner, in Lilongwe, Malawi on February 4, 2020. (Photo by Eldson Chagara/Reuters) 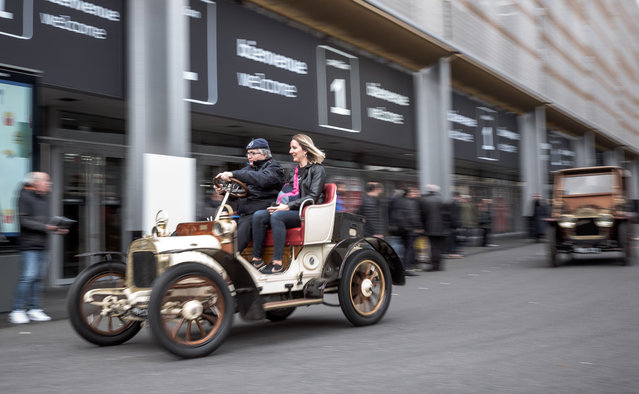 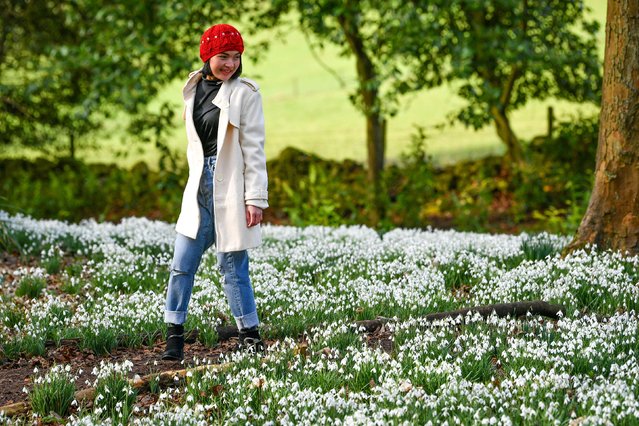 A woman walks in between a carpet of snowdrops in bloom at Painswick Rococo Garden, Painswick, Gloucestershire on February 5, 2020. (Photo by Ben Birchall/PA Images via Getty Images) 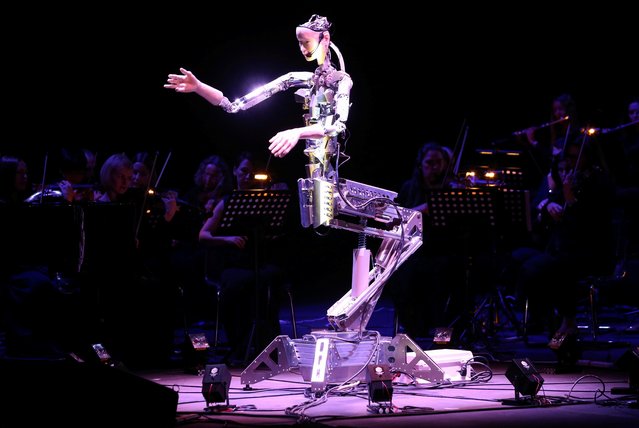