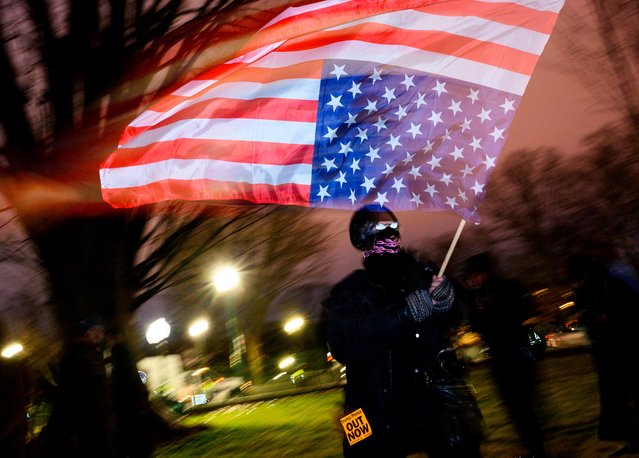 A protester waves a US national flag upside down, in a sign of distress, outside the Capitol in Washington, DC, on February 5, 2020, after the US Senate acquited the US president in his impeachment trial. The US Senate acquitted President Donald Trump of abuse of power and obstruction of Congress following a historic two-week trial. (Photo by Andrew Andrew Caballero-Reynolds/AFP Photo) 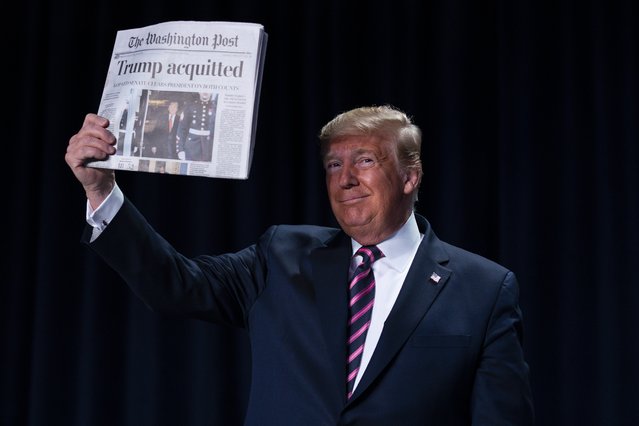 President Donald Trump holds up a newspaper with the headline that reads “Trump acquitted” during the 68th annual National Prayer Breakfast, at the Washington Hilton, Thursday, February 6, 2020, in Washington. (Photo by Evan Vucci/AP Photo) 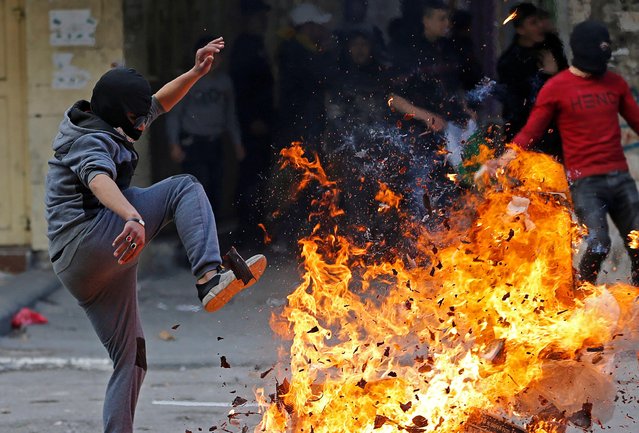 A Palestinian reacts next to a fire during a protest against the U.S. President Donald Trump’s Middle East peace plan, in Hebron in the Israeli-occupied West Bank on February 6, 2020. (Photo by Mussa Qawasma/Reuters) 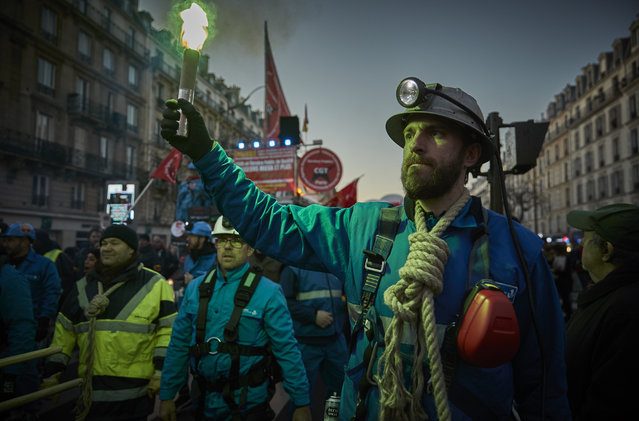 Paris sewer workers march through the streets of Paris on the 9th inter-professional day of strikes and demonstration against President Macron’s controversial pension reform on February 06, 2020 in Paris, France. President Macron is facing his biggest test since the Gilet Jaune or “Yellow Vest” movement as railway, transportation workers, Teachers, students, hospital employees, firemen, lawyers, garbage collectors are continuing the strike called in protest to changes to France’s pension system, currently being debated in parliament, which aims to merge 42 different pension schemes into a single, points-based system, to have everyone in France retire at the same time. (Photo by Kiran Ridley/Getty Images) 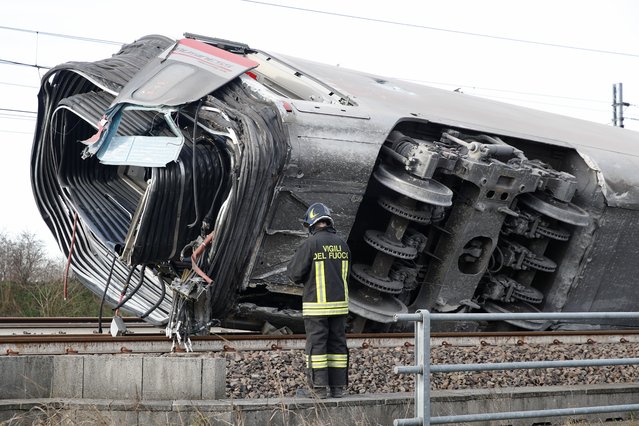 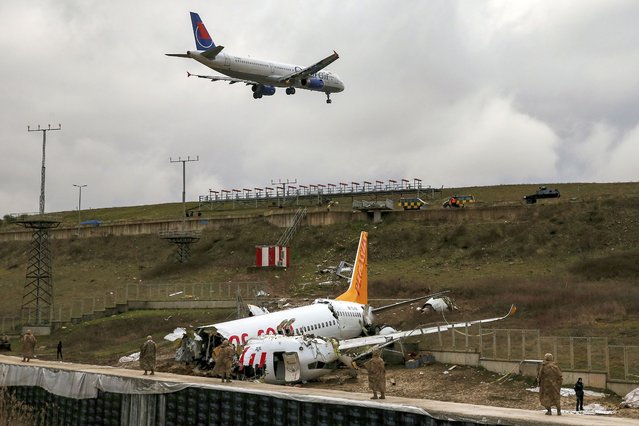 A plane descends to land, as soldiers guard the wreckage of a plane operated by Pegasus Airlines after it skidded Wednesday off the runway at Istanbul's Sabiha Gokcen Airport, in Istanbul, Thursday, February 6, 2020. Flights resumed Thursday after the airliner skidded off a runway, killing three people and injuring dozens. The Boeing 737 landed during strong winds and heavy rain and overshot the runway. It skidded about 50-60 meters (yards) before it dropped into the ditch from a height of about 30 meters (98 feet). (Photo by Emrah Gurel/AP Photo) 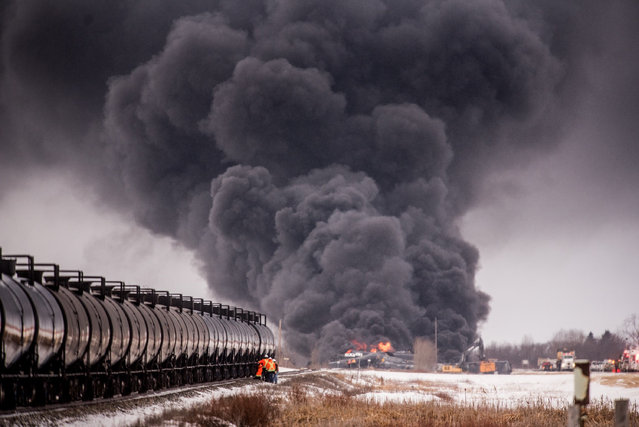 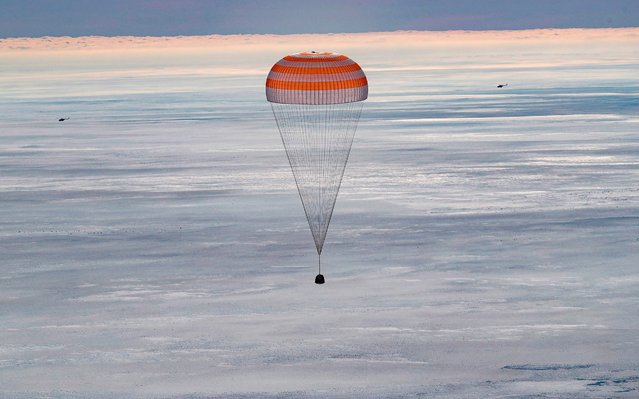 The Soyuz MS-13 capsule carrying the International Space Station (ISS) crew of NASA astronaut Christina Koch, Russian cosmonaut Alexander Skvortsov and Luca Parmitano of the European Space Agency, descends beneath a parachute before landing in a remote area outside the town of Dzhezkazgan (Zhezkazgan), Kazakhstan, on February 6, 2020. (Photo by Sergei Ilnitsky/Pool via AFP Photo) 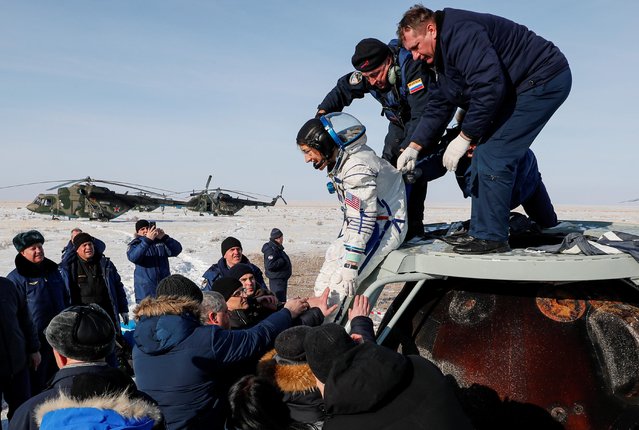 Specialists help NASA astronaut Christina Koch after landing of the Russian Soyuz MS-13 space capsule in a remote area southeast of Zhezkazgan in the Karaganda region of Kazakhstan, February 6, 2020. Koch, who led the first all-female spacewalk in 2019, landed in Kazakhstan after a record stay on the International Space Station, ending a 328-day mission expected to yield new insights into deep-space travel. (Photo by Sergei Ilnitsky/Pool via Reuters) 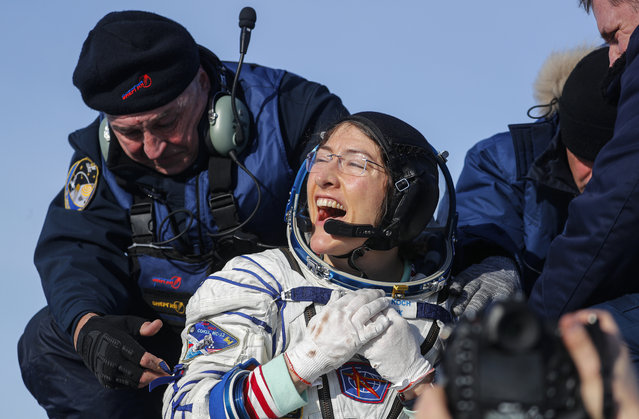 U.S. astronaut Christina Koch reacts shortly after the landing of the Russian Soyuz MS-13 space capsule about 150 km ( 80 miles) south-east of the Kazakh town of Zhezkazgan, Kazakhstan, Thursday, February 6, 2020. A Soyuz space capsule with U.S. astronaut Christina Koch, Italian astronaut Luca Parmitano and Russian cosmonaut Alexander Skvortsov, returning from a mission to the International Space Station landed safely on Thursday on the steppes of Kazakhstan. Koch wrapped up a 328-day mission on her first flight into space, providing researchers the opportunity to observe effects of long-duration spaceflight on a woman as the agency plans to return to the Moon under the Artemis program. (Photo by Sergei Ilnitsky/Pool Photo via AP Photo) 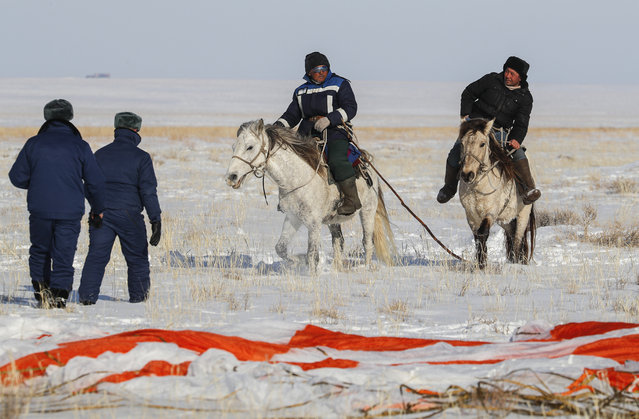 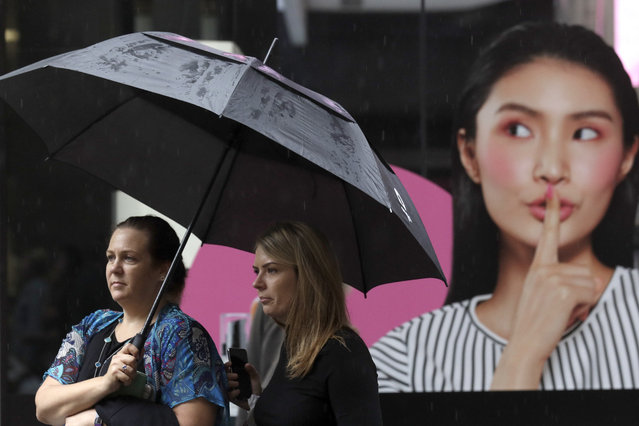 Women shelter under an umbrella as rain falls in Sydney, Friday, February 7, 2020, while the Bureau of Meteorology issued severe weather warning along the New South Wales state coast. The rain comes as a slight relief for some areas dealing with wildfires that devastated large swathes of land across the state over the last several months. (Photo by Rick Rycroft/AP Photo) 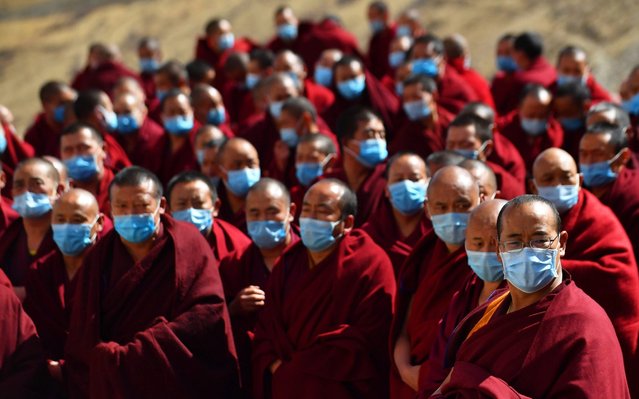 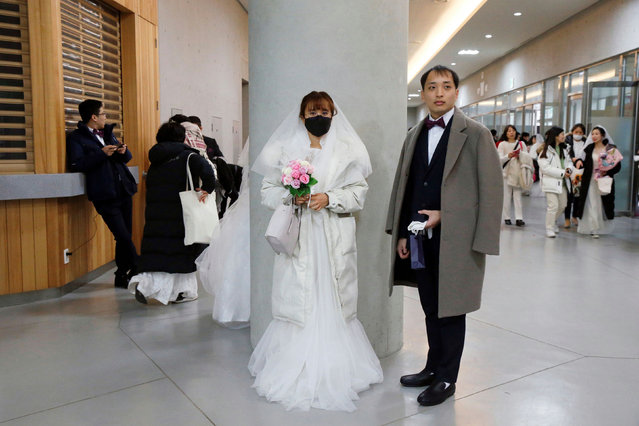 A bride wearing a mask for protection from the new coronavirus, attends a mass wedding ceremony of the Unification Church at Cheongshim Peace World Centre in Gapyeong, South Korea, February 7, 2020. South Korea has confirmed 24 cases of the SARS-like virus so far and placed nearly 260 people in quarantine for detailed checks amid growing public alarm. (Photo by Heo Ran/Reuters) 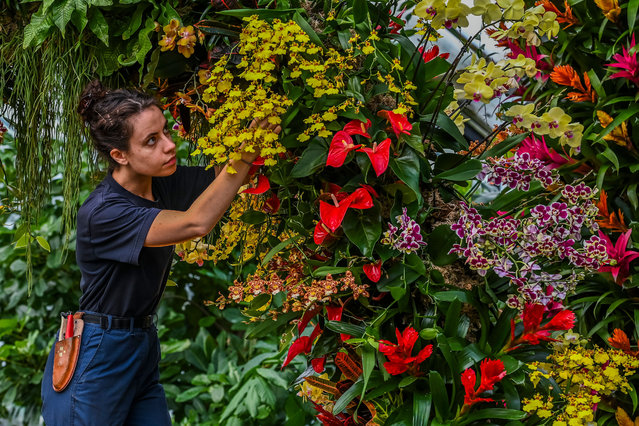