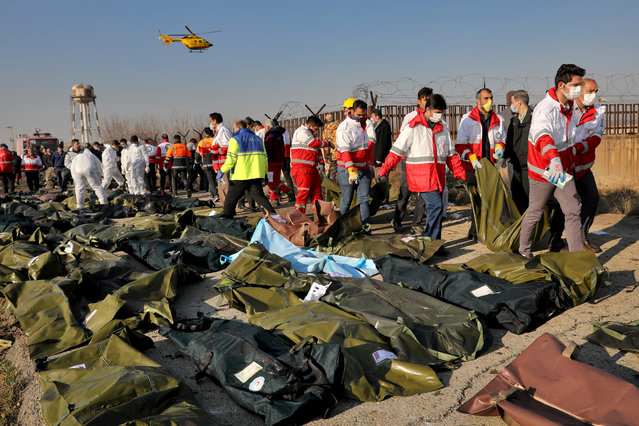 Rescue workers recover bidiesof victims at the scene where a Ukrainian plane crashed in Shahedshahr, southwest of the capital Tehran, Iran, Wednesday, January 8, 2020. The pilot of a Ukranian airliner which crashed in Tehran did not make a call for radio help and was trying to turn back to the airport when the plane plunged from the sky, according to Iranian investigators. Iran is refusing to hand over the black box recorders of the Boeing 737-800, which burst into flames in mid-air before crashing yesterday – killing all 176 people on board. (Photo by Ebrahim Noroozi/AP Photo) 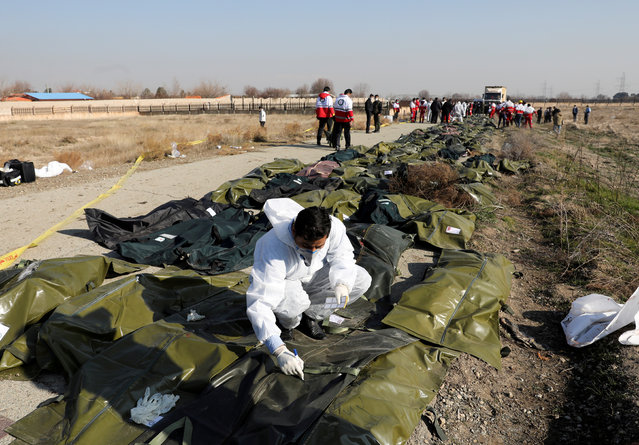 Passengers' bodies in plastic bags are pictured at the site where the Ukraine International Airlines plane crashed after take-off from Iran's Imam Khomeini airport, on the outskirts of Tehran, Iran on January 8, 2020. (Photo by Nazanin Tabatabaee/WANA (West Asia News Agency) via Reuters) 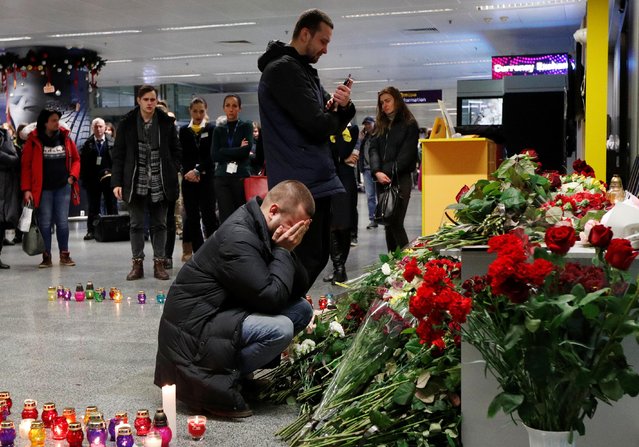 Relatives of the flight crew members of the Ukraine International Airlines Boeing 737-800 plane that crashed in Iran, mourn at a memorial at the Boryspil International airport outside Kiev, Ukraine on January 8, 2020. (Photo by Valentyn Ogirenko/Reuters) 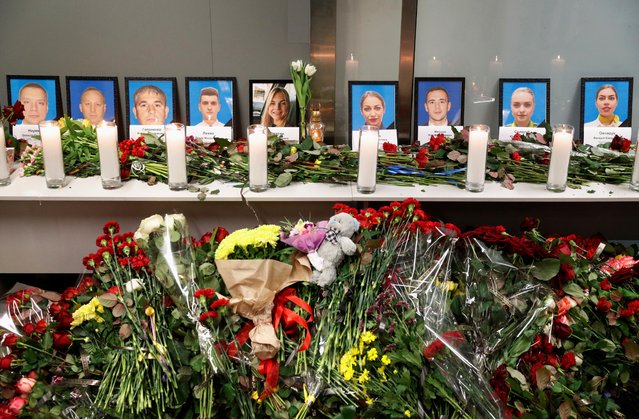 Flowers and candles are placed in front of the portraits of the flight crew members of the Ukraine International Airlines Boeing 737-800 plane that crashed in Iran, at a memorial at the Boryspil International airport outside Kiev, Ukraine on January 8, 2020. (Photo by Valentyn Ogirenko/Reuters) 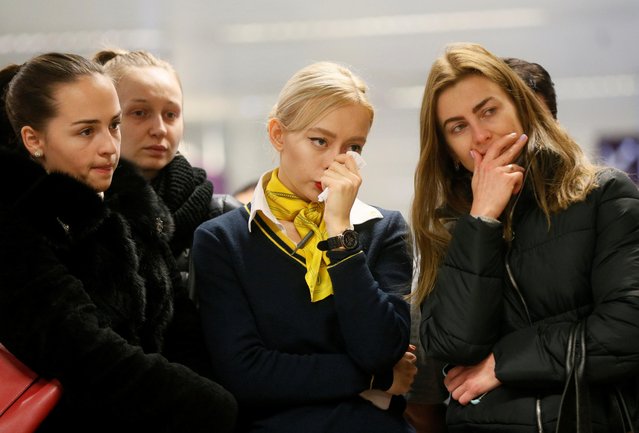 People react in front of a memorial for the flight crew members of the Ukraine International Airlines Boeing 737-800 plane that crashed in Iran, at the Boryspil International airport outside Kiev, Ukraine on January 8, 2020. (Photo by Valentyn Ogirenko/Reuters) 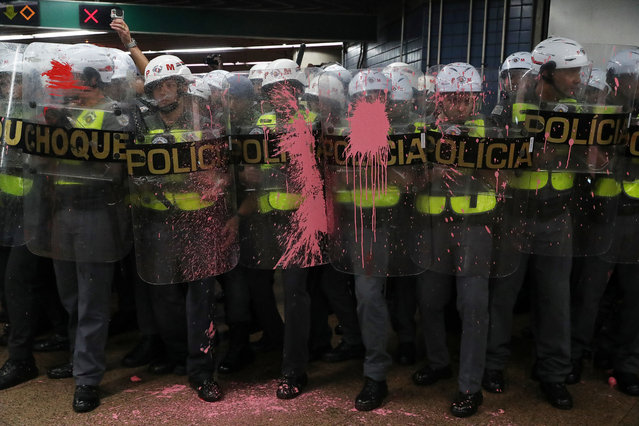 Riot police officers are seen with their shields with paint thrown by demonstrators, who are prevented from jumping over turnstiles, after a protest against fare hikes for city buses in Sao Paulo, Brazil, January 7, 2020. (Photo by Amanda Perobelli/Reuters) 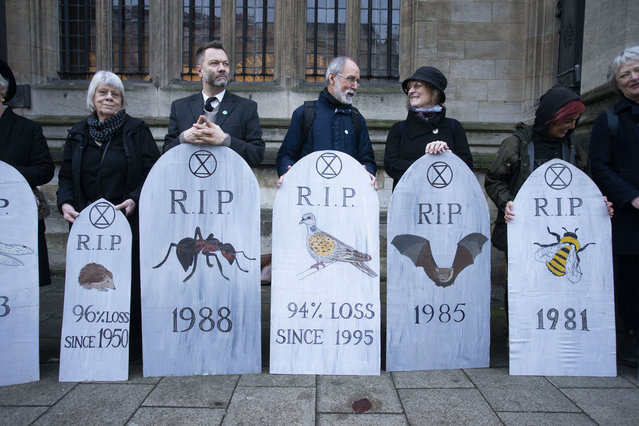 Protesters outside the Oxford Farming Conference, being held at the university in Oxford, England on January 8, 2020. (Photo by David Hartley/Rex Fewatures/Shutterstock) 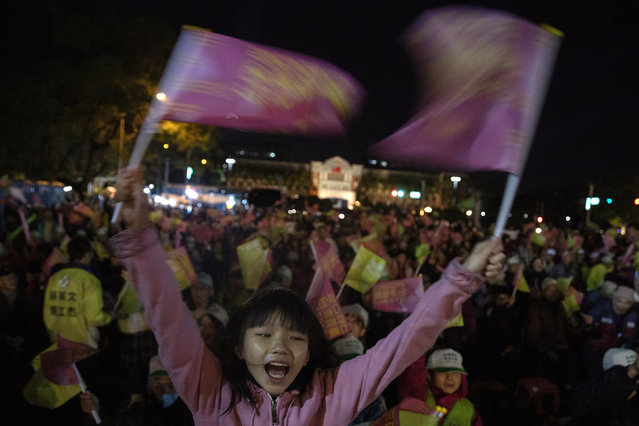 In this Wednesday, January 8, 2020, photo, supporters of Tsai Ing-wen, Taiwan's President and the 2020 presidential election candidate for the Democratic Progressive Party (DPP), cheer during an election campaign rally in northern Taiwan's Hsinchu province. A year ago, the Taiwan leader was on the ropes. Now President Tsai appears poised to win a second four-year term in elections this Saturday. (Photo by Ng Han Guan/AP Photo) 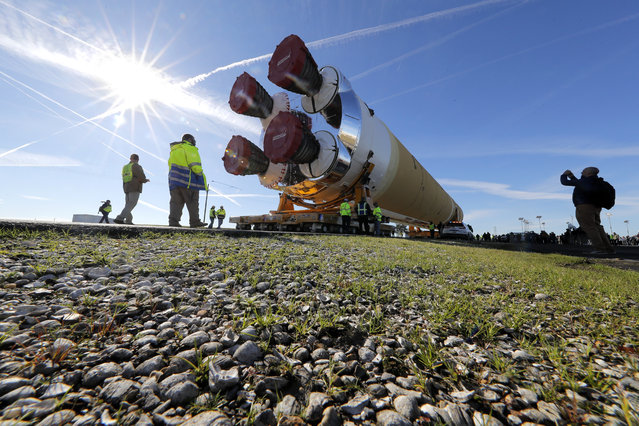 Security and safety personnel walk with the core stage of NASA's Space Launch System rocket, that will be used for the Artemis 1 Mission, as it is moved to the Pegasus barge, at the NASA Michoud Assembly Facility where it was built, in New Orleans, Wednesday, January 8, 2020. It will be transported to NASA's Stennis Space Center in Mississippi for its green run test. (Photo by Gerald Herbert/AP Photo) 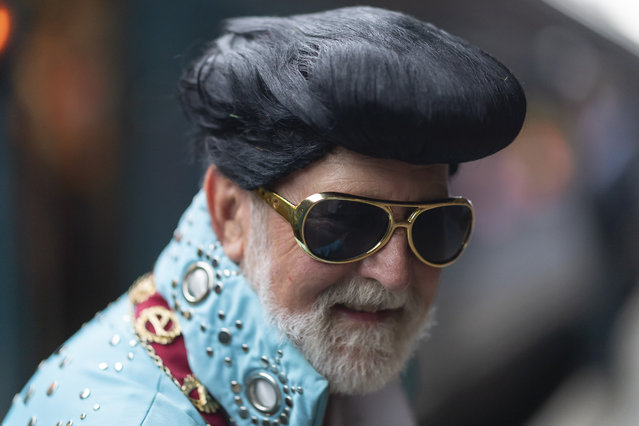 Mayor of Parkes Ken Keith prepares to board the Elvis Express train from Central Station heading to Parkes on January 09, 2020 in Sydney, Australia. The Parkes Elvis Festival is held annually over five days, timed to coincide with Elvis Presley's birth date in January. (Photo by Wendell Teodoro/Getty Images) 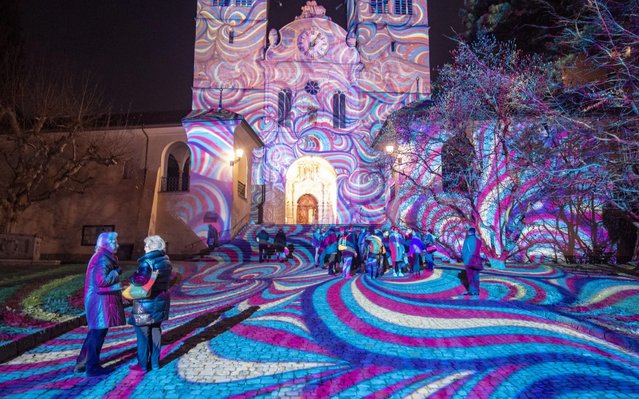 The light projection “En-Trance” by Projektil is on show at the Church of St. Leodegar during the pre-opening of the Lilu Light Festival in Lucerne, Switzerland, 08 January 2020. The festival runs from 09 to 19 January. (Photo by Urs Flueeler/EPA/EFE/Rex Features/Shutterstock) 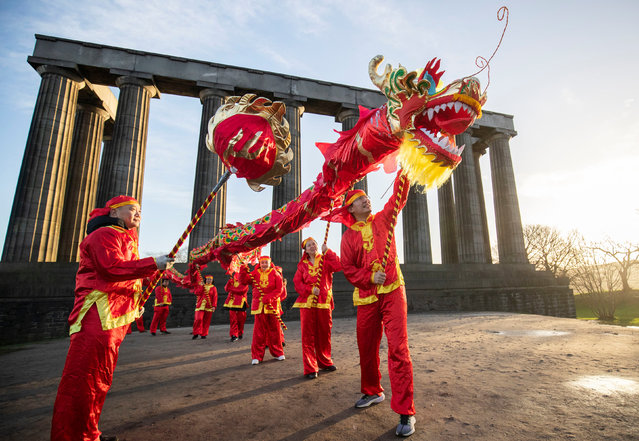 Dancers from the Edinburgh Chinese Education Centre perform a Chinese Dragon dance on January 8, 2020, to launch the 2020 Chinese New Year celebrations and the Year of the Rat on Calton Hill, Edinburgh, Scotland. (Photo by Jane Barlow/PA Images via Getty Images) 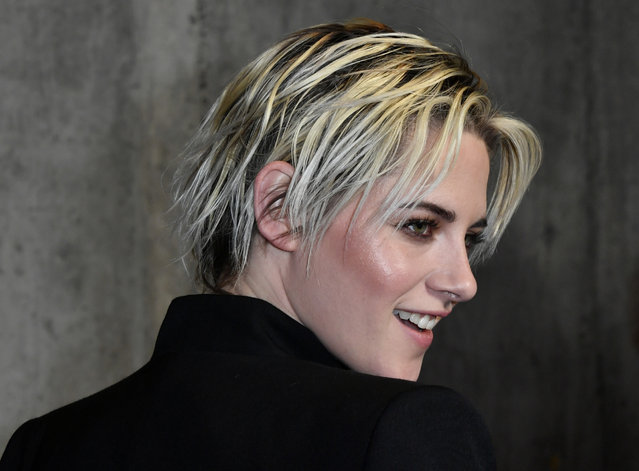 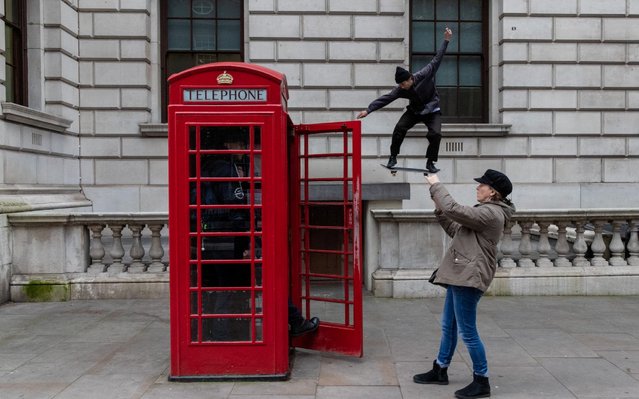 A tourist takes a photo of a friend in one of the famous red telephone boxes just as a skateboarder leaps a gap in the stone balustrade outside government buildings in Great George Street, close to the Houses of Parliament, in London, England on January 8, 2020. (Photo by South West News Service) 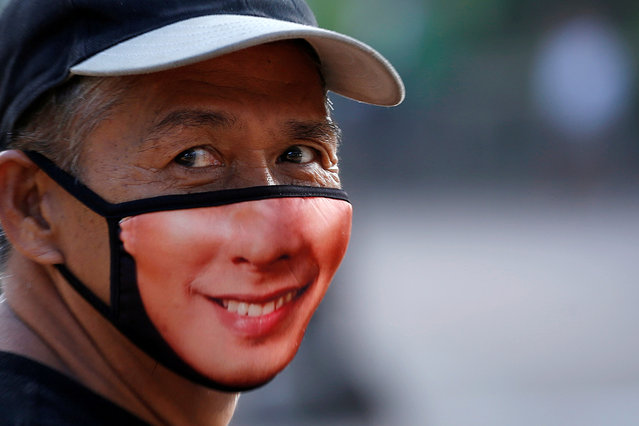