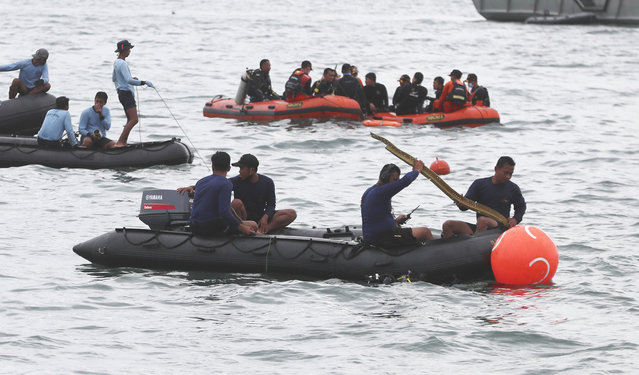 Rescuers carry debris found in the waters around the location where a Sriwijaya Air passenger jet has lost contact with air traffic controllers shortly after the takeoff, in Java Sea, near Jakarta, Indonesia, Sunday, January 10, 2021. Indonesian divers on Sunday located parts of the wreckage of a Boeing 737-500 in the Java Sea, a day after the aircraft with dozens of people onboard crashed shortly after takeoff from Jakarta. (Photo by Achmad Ibrahim/AP Photo) 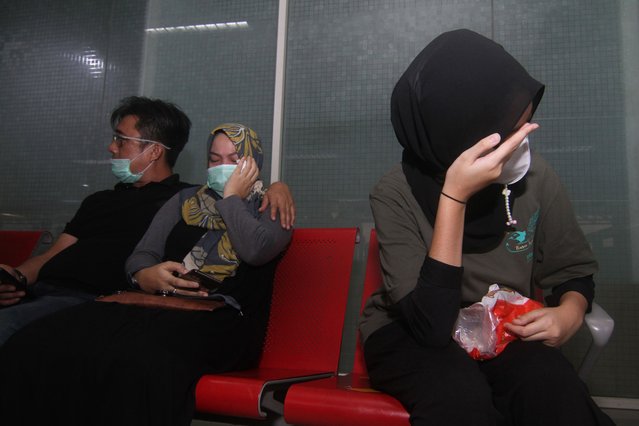 Relatives of passengers on board missing Sriwijaya Air flight SJY182 wait for news at the Supadio airport in Pontianak on Indonesia's Borneo island on January 9, 2021, after contact with the aircraft was lost shortly after take-off from Jakarta. (Photo by Louis Anderson/AFP Photo) 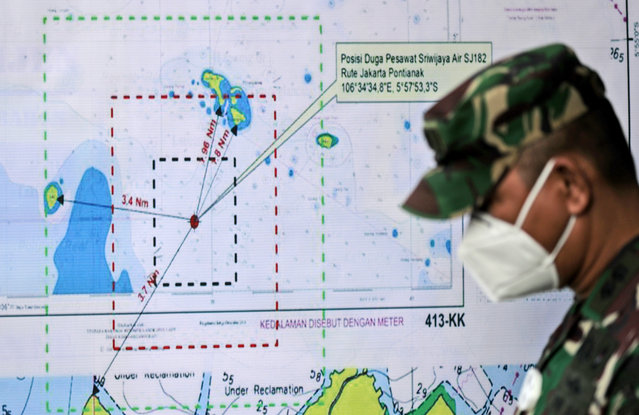 An Indonesian soldier walks past a map showing the location where a Sriwijaya Air passenger jet has lost contact with air traffic controllers shortly after taking off, at the search and rescue command center at Tanjung Priok Port in Jakarta, Indonesia, Sunday, January 10, 2021. The Boeing 737-500 took off from Jakarta for Pontianak, the capital of West Kalimantan province on Indonesia's Borneo island, and lost contact with the control tower a few moments later. (Photo by Dita Alangkara/AP Photo) 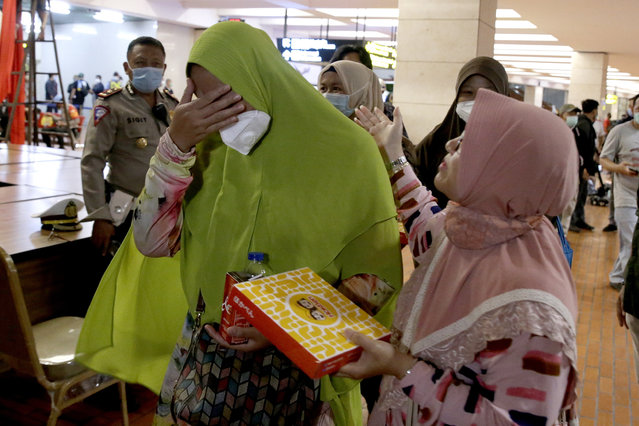 Relatives of Sriwijaya Air plane passengers arrive at the crisis center in Soekarno-Hatta International Airport following the report that Sriwijaya Air plane flight SJ182 lost contact shortly after taking off, at Tanjung Priok Port in Jakarta, Indonesia, 09 January 2021. According to an airline spokesperson, contact to Sriwijaya Air flight SJ182 was lost on 09 January 2021 shortly after the aircraft took off from Jakarta International Airport while en route to Pontianak in West Kalimantan province. A search and rescue operation is under way. (Photo by Mast Irham/EPA/EFE) 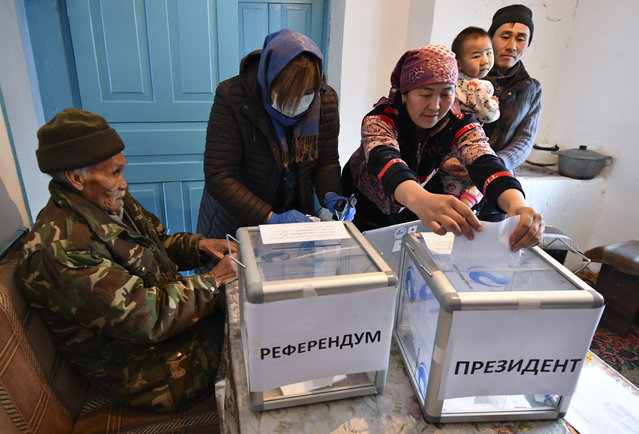 People vote during the presidential elections in Arashan village, about 15 kilometers (9,4 miles) south of Bishkek, Kyrgyzstan, Saturday, January 9, 2021. Voters in Kyrgyzstan are casting ballots in an early presidential election that follows the ouster of the nation's previous president. President Sooronbai Jeenbekov was forced to step down on Oct. 15 under pressure from demonstrators who challenged the results of a parliamentary vote earlier that month. (Photo by Vladimir Voronin/AP Photo) 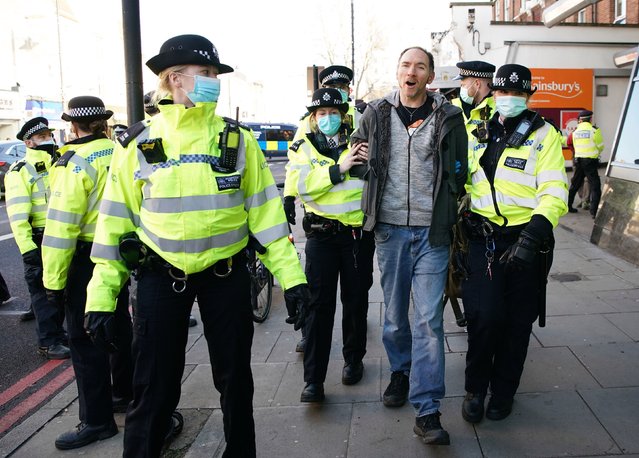 Police detain a man during an anti-lockdown protest in Clapham Common, London, United Kingdom on January 9, 2021. Rabbles gathered in London despite the plea of experts and authorities to stay at home to stop the spread of the deadly bug as cases continue to soar. (Photo by Aaron Chown/PA Images via Getty Images) 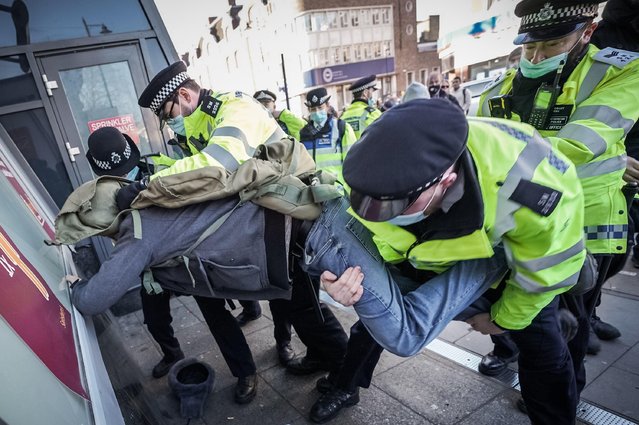 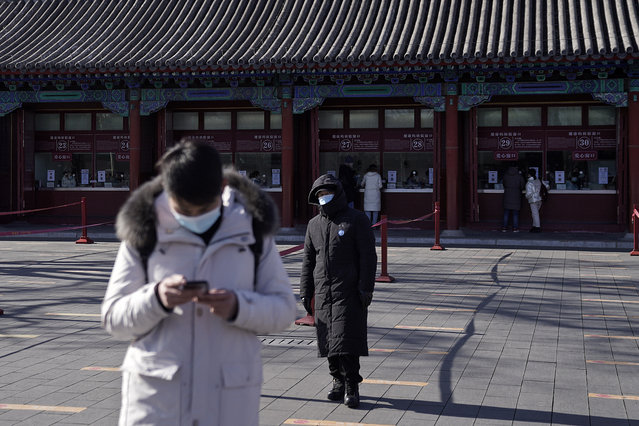 A man wearing a face mask to help curb the spread of the coronavirus browses his smartphone as a masked security guard stands near the quiet ticket counters at the Forbidden City in Beijing, Sunday, January 10, 2021. More than 360 people have tested positive in a growing COVID-19 outbreak south of Beijing in neighboring Hebei province. (Photo by Andy Wong/AP Photo) 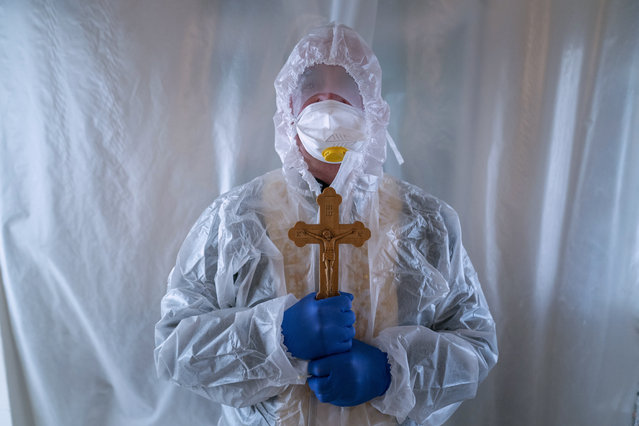 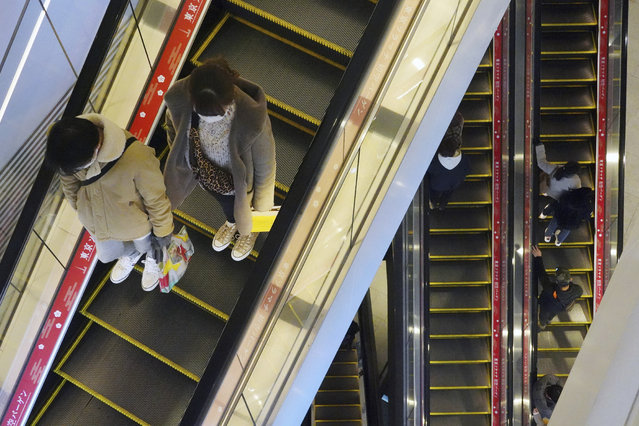 People wearing protective masks to help curb the spread of the coronavirus take usually crowded escalators at a shopping arcade in Tokyo Saturday, January 9, 2021. The Japanese capital confirmed more than 2200 new coronavirus cases on Saturday. Japanese Prime Minister Yoshihide Suga declared a state of emergency last Thursday for Tokyo and three other prefectures to ramp up defenses against the spread of the coronavirus. (Photo by Eugene Hoshiko/AP Photo) 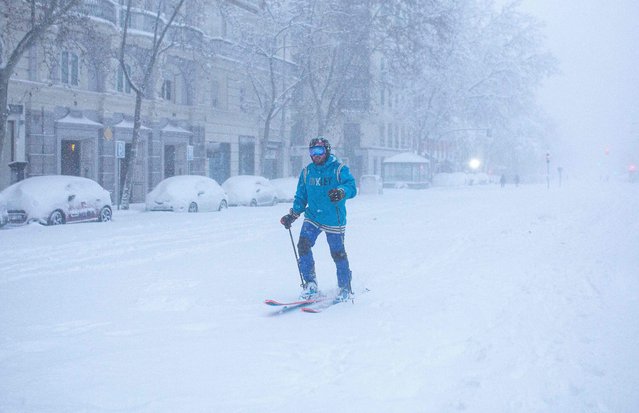 A man skis amid a heavy snowfall in Madrid on January 9, 2021. Heavy snow fell across much of Spain, leaving huge areas blanketed in white as Storm Filomena brought wintry weather not seen in decades to the Iberian peninsula. (Photo by Benjamin Cremel/AFP Photo) 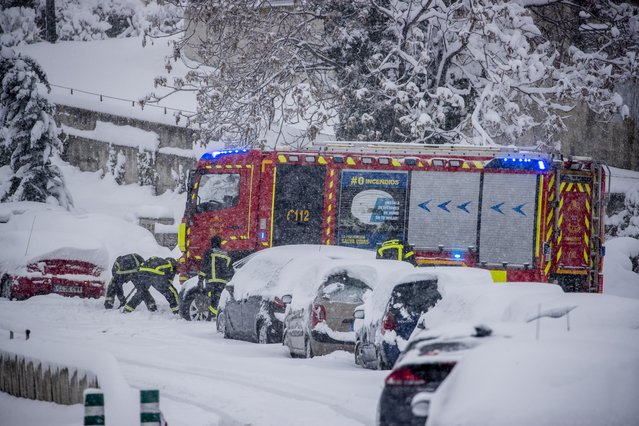 Firefighters work removing snow from a car during a heavy snowfall in Rivas Vaciamadrid, Spain, Saturday, January 9, 2021. An unusual and persistent blizzard has blanketed large parts of Spain with snow, freezing traffic and leaving thousands trapped in cars or in train stations and airports that had suspended all services as the snow kept falling on Saturday. The capital, Madrid, and other parts of central Spain activated for the first time its red weather alert, its highest, and called in the military to rescue people from cars vehicles trapped in everything from small roads to the city's major thoroughfares. (Photo by Manu Fernandez/AP Photo) 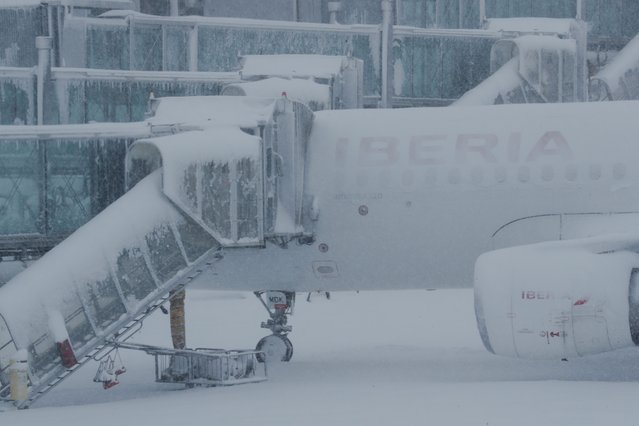 A parked plane is covered with snow at Adolfo Suarez Barajas airport, which is suspending flights due to heavy snowfall in Madrid, Spain, January 9, 2021. (Photo by Susana Vera/Reuters) 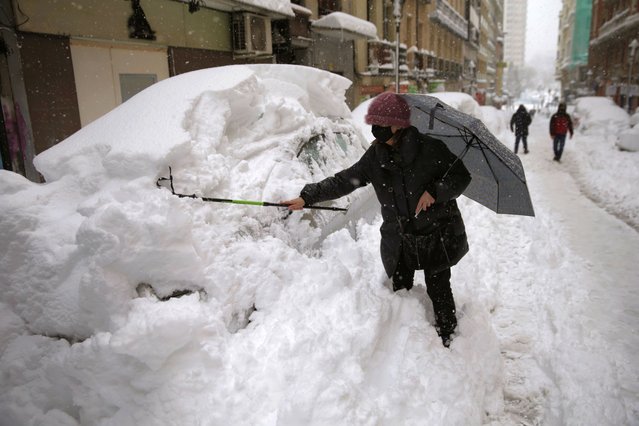 A woman tries to remove the snow from her car during a heavy snowfall in downtown Madrid, Spain, Saturday, January 9, 2021. (Photo by Andrea Comas/AP Photo) 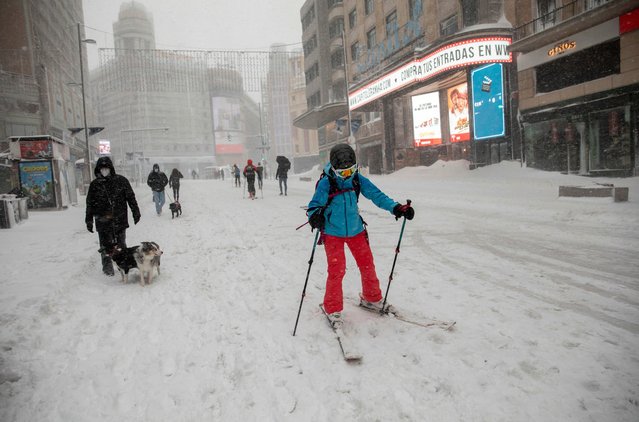 A woman snow ski at Gran Via street during heavy snowfall on January 09, 2021 in Madrid, Spain. Spain is on red alert for a second day due to storm Filomena, which has brought unusually cold weather and heavy snowfalls. The storm has caused cancelled services and transport disruption. (Photo by Pablo Blazquez Dominguez/Getty Images) 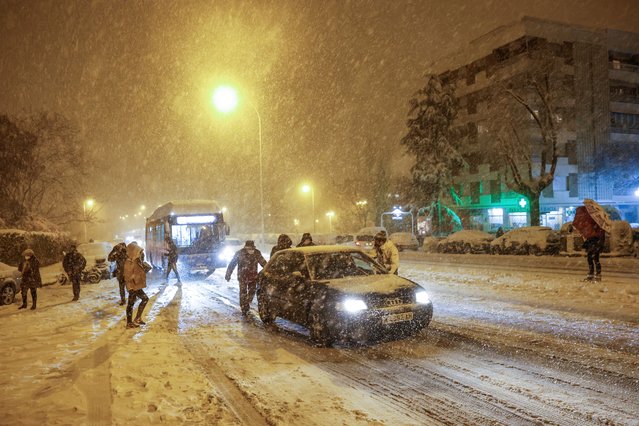 People push a car stranded in the snow in Madrid, Spain, late 08 January 2021. A red warning has been issued in Madrid as storm Filomena b​rought the heaviest snowfall in decades. (Photo by Rodrigo Jimenez/EPA/EFE) 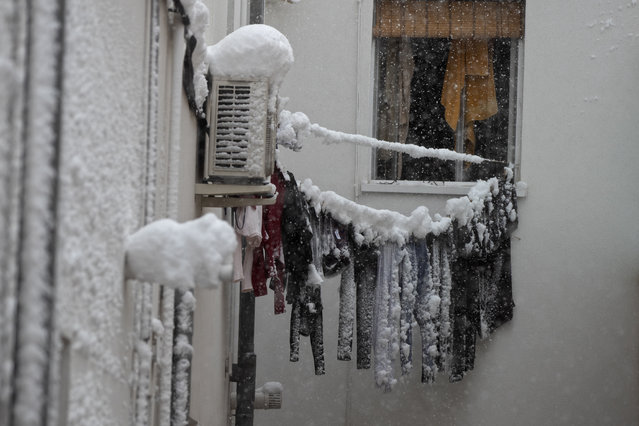 Frozen laundry hangs on a line outside an apartment window after a heavy snowfall in Madrid, Spain, Saturday, January 9, 2021. Spain is on high alert as a cold snap is covering much of the country with snow disrupting road, sea, rail and air traffic with the capital, Madrid enduring what the city's mayor described as “the worst storm in 80 years”. (Photo by Paul White/AP Photo) 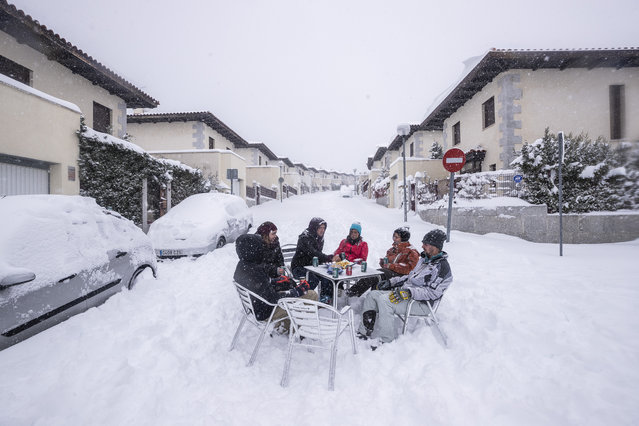 Neighbours have drinks in the middle of the street during a heavy snowfall in Bustarviejo, outskirts of Madrid, Spain, Saturday, January 9, 2021. A persistent blizzard has blanketed large parts of Spain with 50-year record levels of snow, halting traffic and leaving thousands trapped in cars or in train stations and airports that suspended all services as the snow kept falling on Saturday. Half of Spain is on alert, with five provinces on their highest level of warning. (Photo by Bernat Armangue/AP Photo) 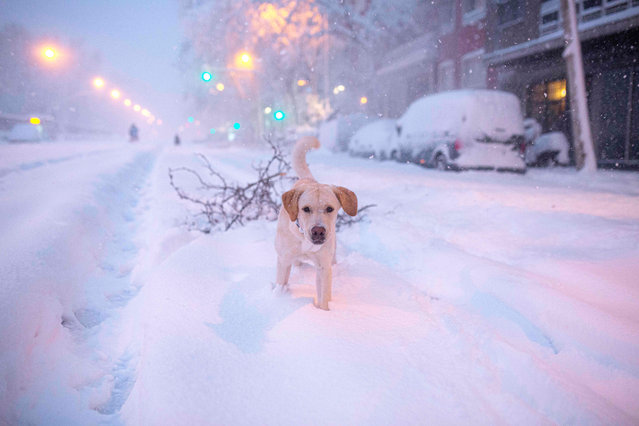