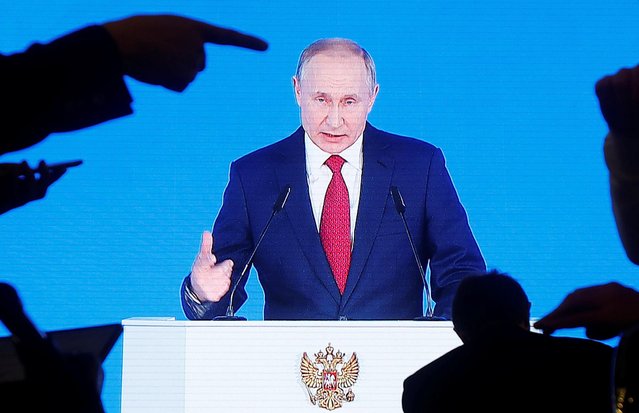 Russian President Vladimir Putin is seen on screen as he delivers his annual state of the nation address to the Federal Assembly in Moscow on January 15, 2020. Russia's government unexpectedly resigned on Wednesday after President Vladimir Putin proposed sweeping constitutional changes that could allow him to extend his rule. (Photo by Maxim Shemetov/Reuters) 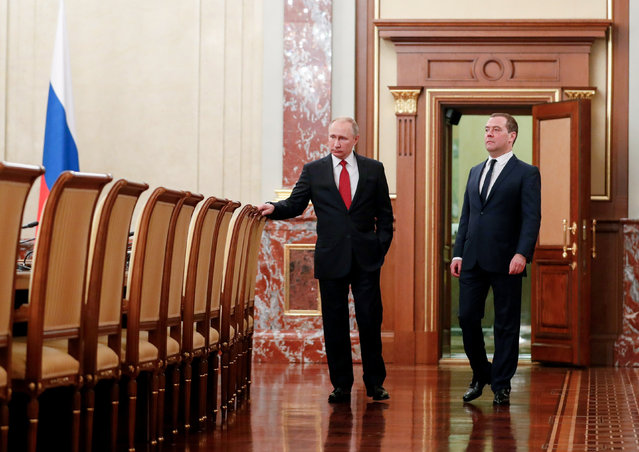 Russian President Vladimir Putin, right, and Russian Prime Minister Dmitry Medvedev talk to each other prior to a cabinet meeting in Moscow, Russia, Wednesday, January 15, 2020. The Tass news agency reports Wednesday that Russian Prime Minister Dmitry Medvedev submitted his resignation to President Vladimir Putin. Russian news agencies said Putin thanked Medvedev for his service but noted that the prime minister's Cabinet failed to fulfill all the objectives set for it. (Photo by Dmitry Astakhov/Sputnik/Government Pool Photo via AP Photo) 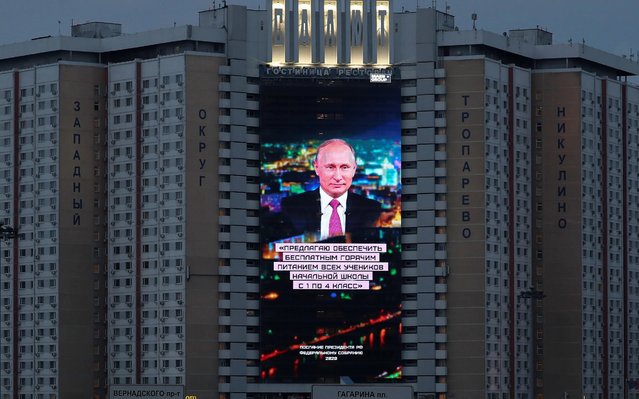 An electronic screen, installed on the facade of a hotel, shows an image of Russian President Vladimir Putin and a quote from his annual address to the Federal Assembly in Moscow, Russia on January 15, 2020. The quote reads: “I propose to provide free hot meals to all elementary school students from grades 1 to 4”. (Photo by Evgenia Novozhenina/Reuters) 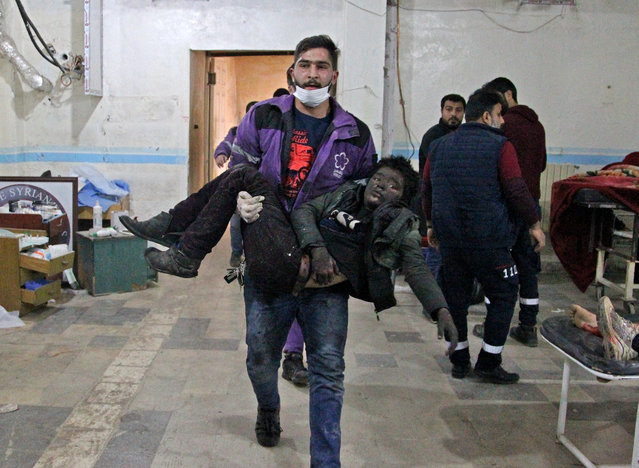 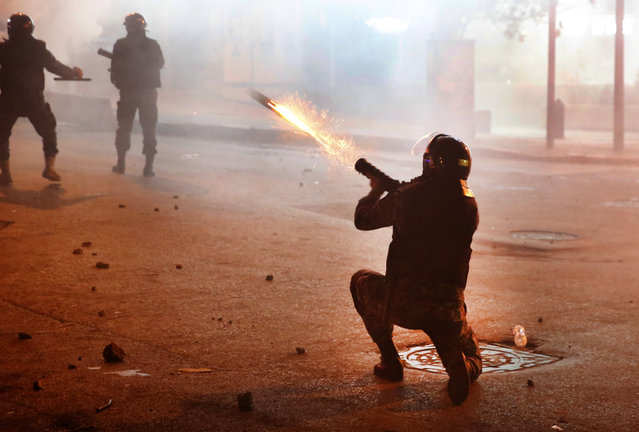 A riot policeman fires tear gas against the anti-government protesters, during ongoing protests against the Lebanese central bank's governor and against the deepening financial crisis, at Hamra trade street, in Beirut, Lebanon, Tuesday, January 14, 2020. Lebanese security forces lobbed tear gas at protesters who responded with rocks outside the country's central bank Tuesday, a violent turn after demonstrators returned to the streets following a weekslong lull. (Photo by Hussein Malla/AP Photo) A police armored personnel carrier passes next of anti-government protesters outside police headquarters, as they demand the release of those taken into custody the night before, in Beirut, Lebanon, Wednesday, January 15, 2020. Lebanese security forces arrested 59 people, the police said Wednesday, following clashes overnight outside the central bank as angry protesters vented their fury against the country's ruling elite and the worsening financial crisis. (Photo by Hussein Malla/AP Photo) 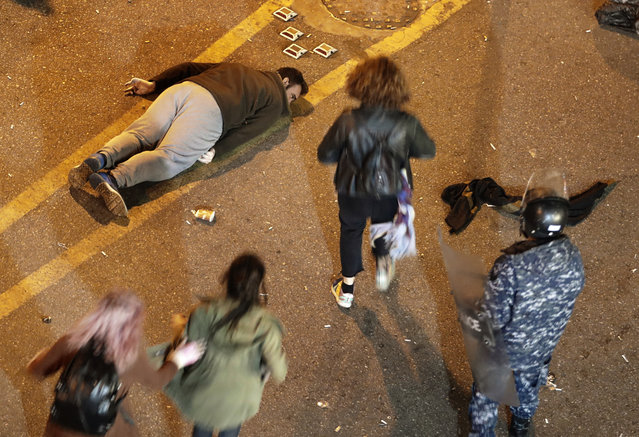 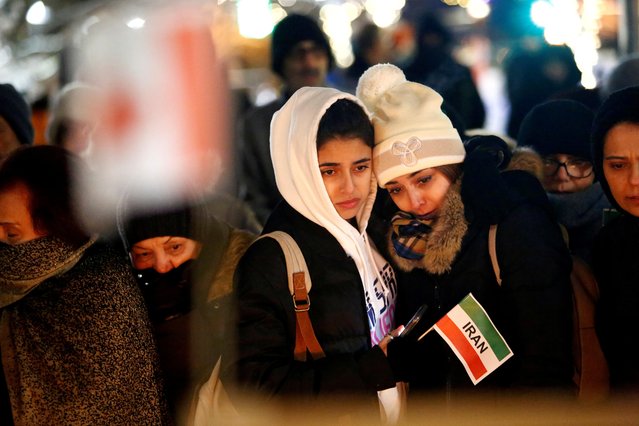 Mourners attend a vigil for the victims of a Ukrainian passenger jet which was shot down in Iran, in North Vancouver, British Columbia, Canada on January 14, 2020. (Photo by Jesse Winter/Reuters) 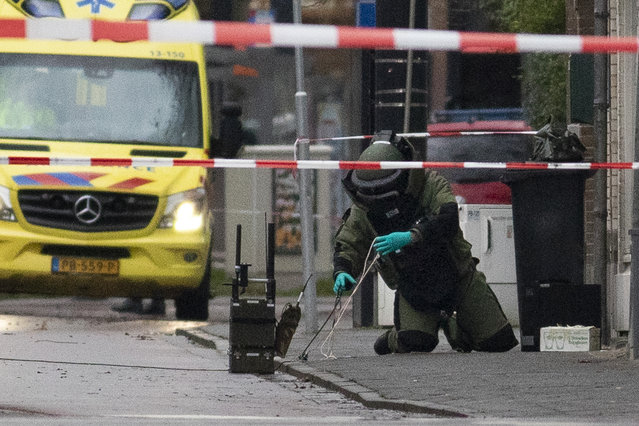 A member of the Explosive Ordnance Disposal team, EOD, examines a suspect package after it was found on the doorstep of Kosher restaurant HaCarmel in Amsterdam, Netherlands, Wednesday, January 15, 2020. (Photo by Peter Dejong/AP Photo) 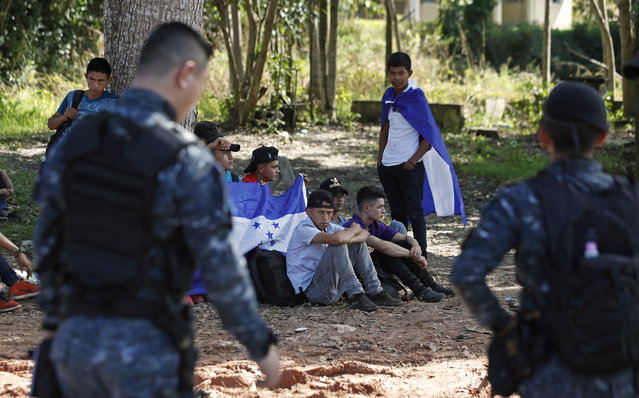 Honduras migrants trying to reach the United States sit with their backpacks and Honduran flags as they are stopped by Guatemalan National Police after crossing the Honduran border, in Morales, Guatemala, Wednesday, January 15, 2020. Migrants in the group said they left Honduras very late Tuesday, around midnight. (Photo by Moises Castillo/AP Photo) 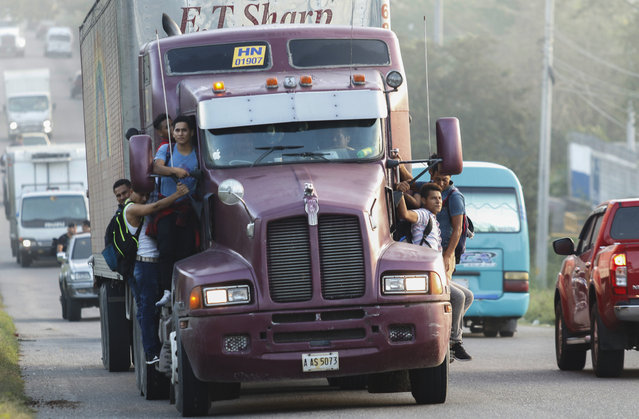 Migrants ride on the side of a truck moving along the highway, in hopes of reaching the distant United States, in San Pedro Sula, Honduras, early Wednesday, January 15, 2020. Hundreds of Honduran migrants started walking and hitching rides Wednesday from the city of San Pedro Sula, in a bid to form the kind of migrant caravan that reached the U.S. border in 2018. (Photo by Delmer Martinez/AP Photo) People protest where outgoing President Jimmy Morales is sworn-in as a member of the Central American Parliament in Guatemala City, Tuesday, January 14, 2020. Guatemala will swear-in on Tuesday a new president as Morales exits amid swirling corruption accusations. (Photo by Oliver de Ros/AP Photo) 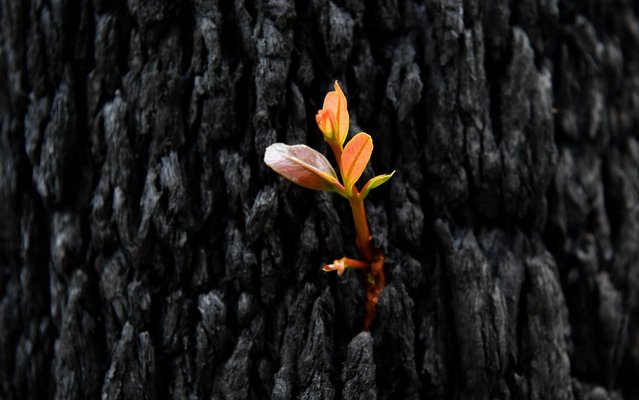 Regrowth of plants is seen in bushland that was destroyed by bushfires, in Kulnura, New South Wales, 15 January 2020. (Photo by Joel Carrett/EPA/EFE/Rex Features/Shutterstock) Police officers and local residents dig to search bodies of victims of avalanches in Doodnail village in Neelum Valley, Pakistan-administered Kashmir, Wednesday, January 15, 2020. Search teams aided by Pakistani troops pulled out 21 more bodies from homes destroyed by this week's avalanches in the disputed Himalayan region of Kashmir, raising the overall death toll due to severe winter weather to more than 155 for Pakistan and Afghanistan, officials said. (Photo by Abdul Razaq/AP Photo) 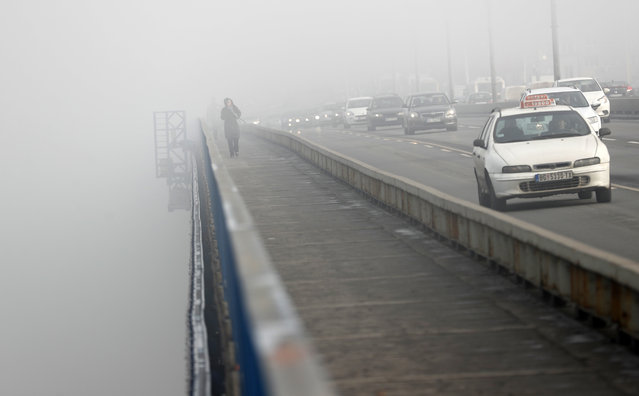 A girl walks across a bridge in Belgrade, Serbia, Wednesday, January 15, 2020. Serbia's government on Wednesday called an emergency meeting, as many cities throughout the Balkans have been hit by dangerous levels of air pollution in recent days, prompting residents' anger and government warnings to stay indoors and avoid physical activity. (Photo by Darko Vojinovic/AP Photo) A general view of the surroundings of the city of Sarajevo, Bosnia and Herzegovina, 15 January 2020. The city is covered with a thick layer of fog. It is recommended to residents of Sarajevo to reduce traffic on the roads. With 348 AQI (Air Quality Index), Sarajevo is one of the most polluted cities in the world. (Photo by Fehim Demir/EPA/EFE/Rex Features/Shutterstock) 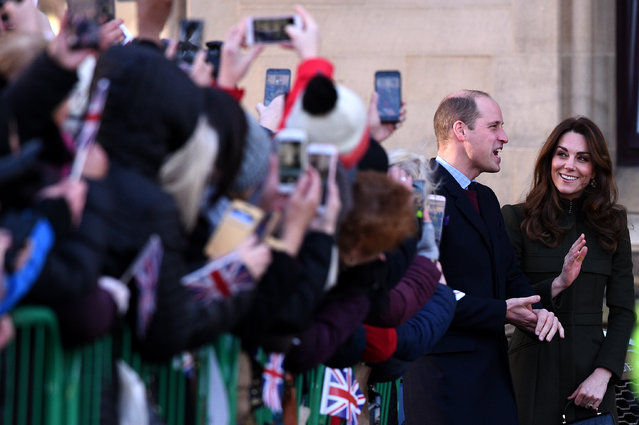 Britain's Prince William, Duke of Cambridge (L) and Britain's Catherine, Duchess of Cambridge arrive for a visit to City Hall in Centenary Square, Bradford on January 15, 2020, to meet young people and hear about their life in Bradford. (Photo by Oli Scarff/AFP Photo) 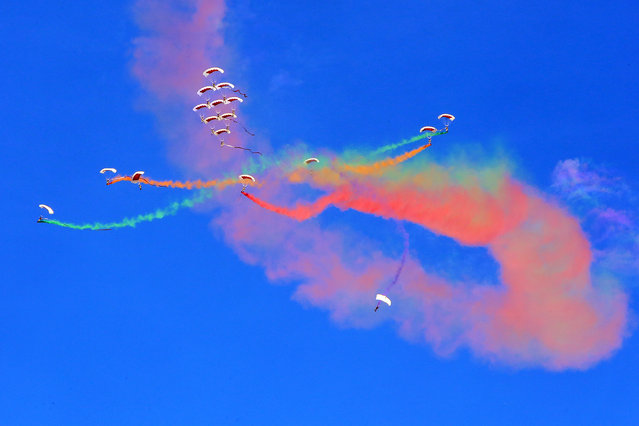 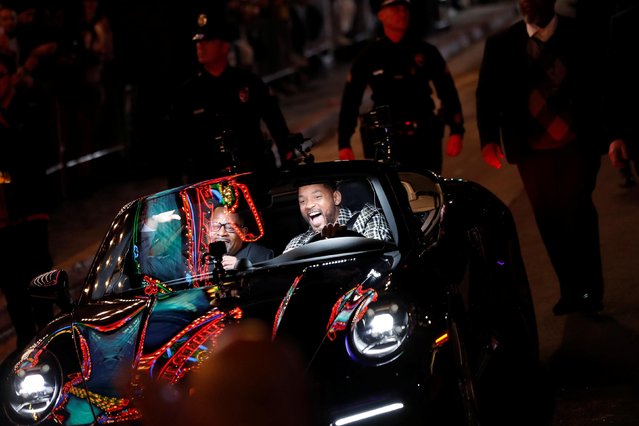