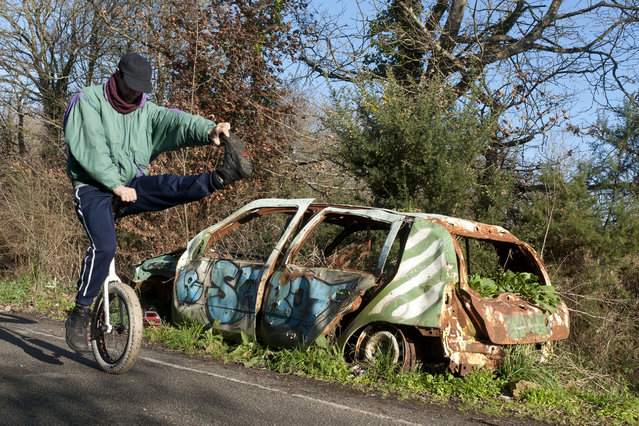 An activist on a unicycle rides past an abandoned car that could be used as a barricade in the “ZAD” (zone to defend), in Notre-Dame-des-Landes, outside the city of Nantes, western France, Wednesday, January 17, 2018. French Prime Minister Edouard Philippe says that the government has decided against building an airport in western France that has mobilized nearly a decade of sometimes violent protests and he told protesters occupying the site that they must leave. (Photo by Mathieu Pattier/AP Photo) 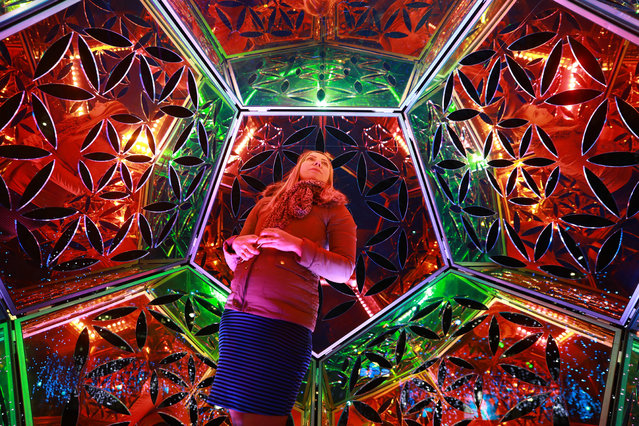 A woman interacts with art installation Dazzling Dodecahedron at the Winter Lights festival at Canary Wharf in East London, Britain, 16 January 2018. The art exhibition runs from 16 to 27 of January across sites at Canary Wharf. (Photo by Neil Hall/EPA/EFE) 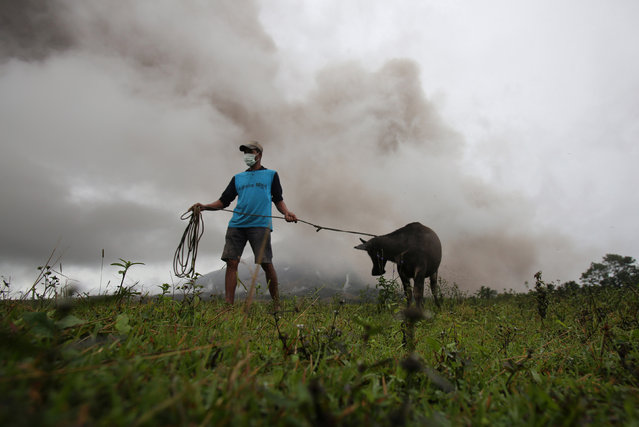 A farmer gets his calf to bring to the nearest evacuation centre after Mayon Volcano spews ashes in Camalig, Albay province, Philippines, January 17, 2018. (Photo by Reuters/Stringer) 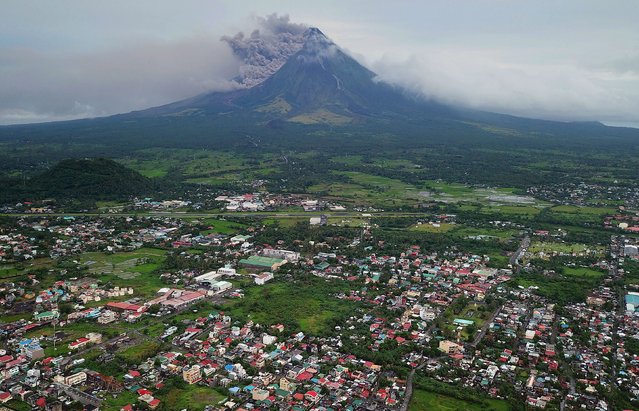 A view of rumbling Mayon Volcano as it spew ash in Legaspi city, Albay province, Philippines, 16 January 2018. The Philippines on 15 January raised the alert level due to the possibility of a hazardous eruption of the Mayon volcano, in the east of the country, after it spewed clouds of ashes over the weekend, leading to an evacuation of more than a thousand people. (Photo by Zalrian Sayat/EPA/EFE) 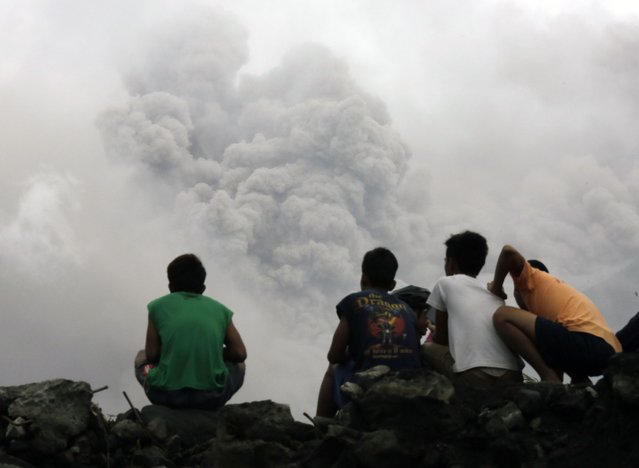 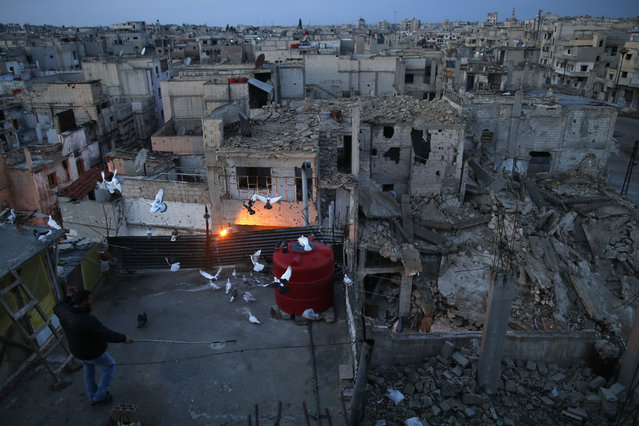 In this Tuesday, January 16, 2018 photo, a pigeon keeper watches his pigeons fly from the roof of is home in the war-damaged Bab Dreib neighborhood of the old city, in Homs, Syria. It has been almost four years since the last remaining rebels and civilians withdrew from the remaining strongholds in the ancient heart of Homs in Syria. But few people have returned, and large parts of the once vibrant old city are still abandoned and destroyed, as if time had stood still since the guns fell silent. (Photo by Hassan Ammar/AP Photo) 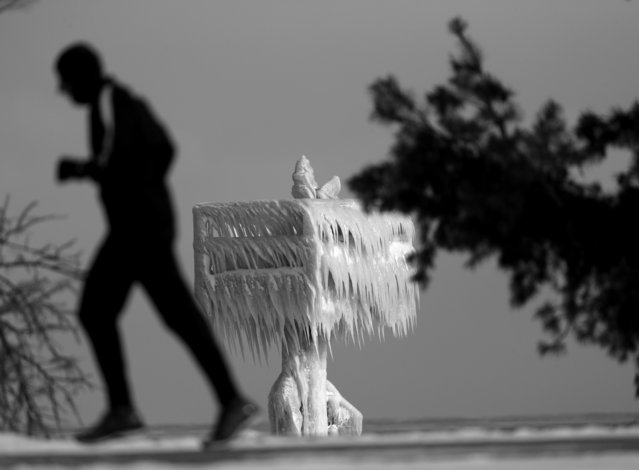 A lone runner jogs past a shore beacon encased by a combination of blowing snow and spray along Lake Michigan at the 31st Street beach Tuesday, January 16, 2018, in Chicago. The National Weather Service has wind chill advisories in effect for western, central and southern Illinois as bitter cold temperatures blanketed parts of the state. (Photo by Charles Rex Arbogast/AP Photo) 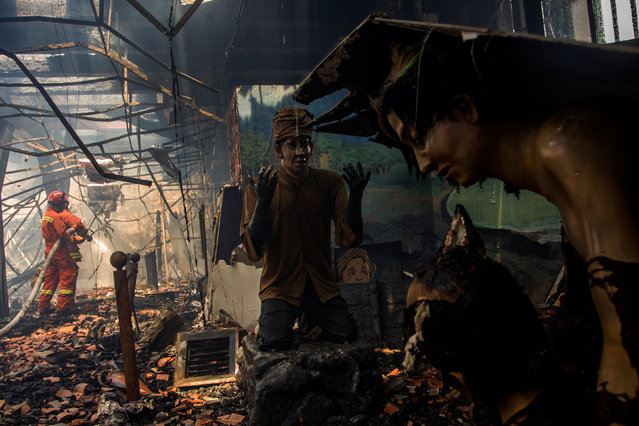 A firefighter uses an extinguisher at the Bahari Museum following a fire, in Jakarta, Indonesia January 16, 2018 in this photo taken by Antara Foto. (Photo by Galih Pradipta/Reuters/Antara Foto) 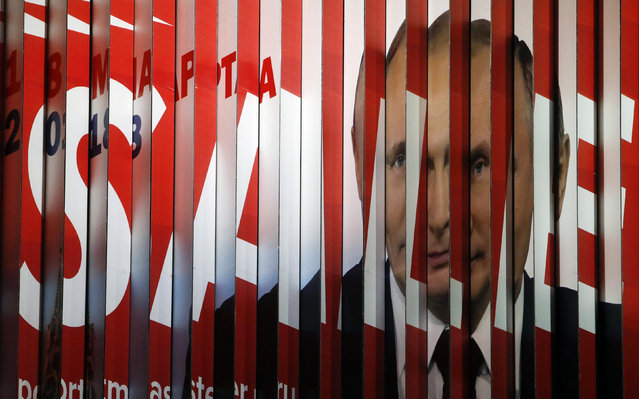 A multi-sided transformable board, which advertises the campaign of Russian President Vladimir Putin ahead of the upcoming presidential election, is on display in a street in Moscow, Russia January 15, 2018. (Photo by Sergei Karpukhin/Reuters) 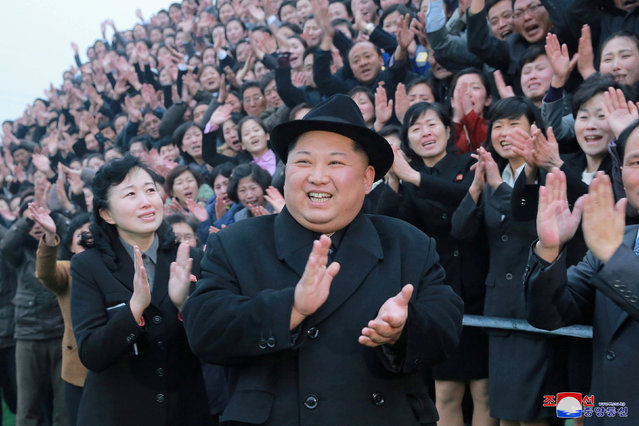 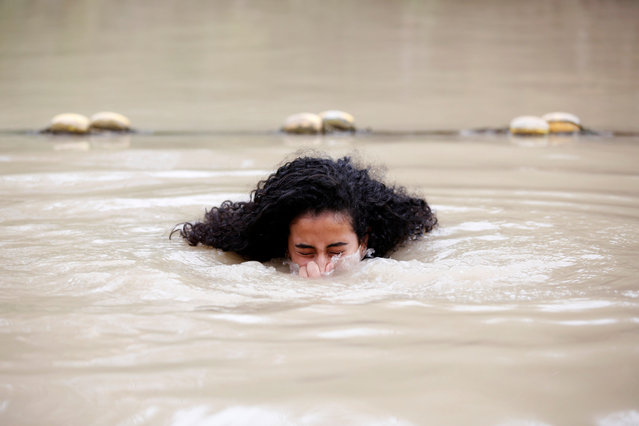 An Orthodox Christian pilgrim is baptized, as pilgrims arrived ahead of Epiphany Day at the Qasr al Yahud baptism site, near the West Bank city of Jericho, 17 January 2018. The baptism site is where, according to tradition, Jesus was baptized by John the Baptist. Christian tradition marks this site as the place of the “spiritual birth” of Jesus as opposed to his physical birth. (Photo by Abir Sultan/EPA/EFE) 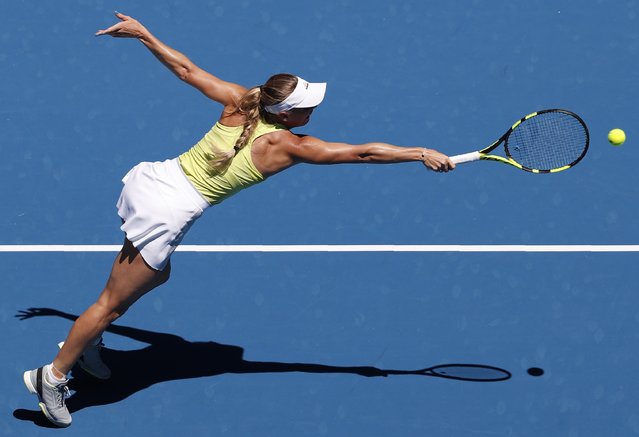 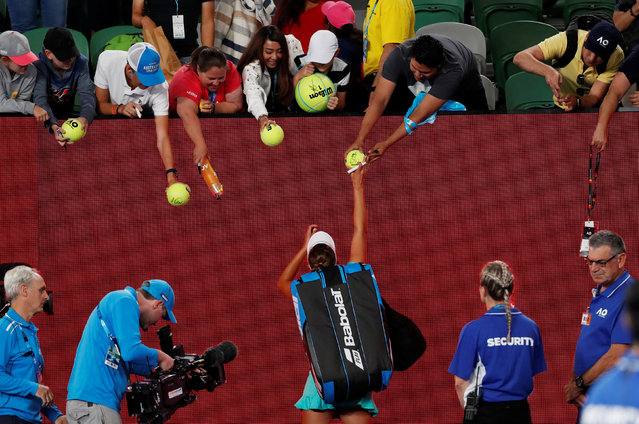 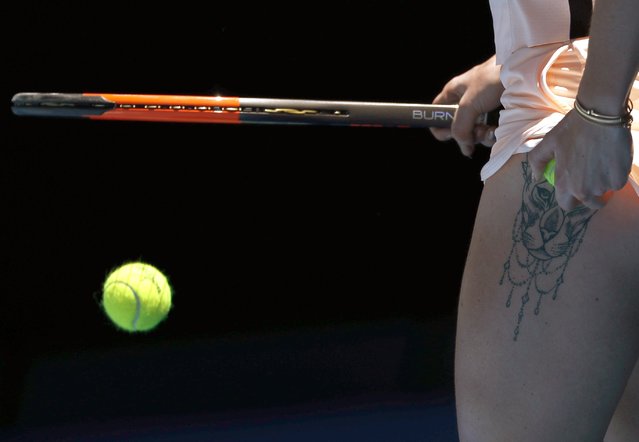 Elina Svitolina of Ukraine prepares to serve against Katerina Siniakova of Czech Republic on day three of the Australian Open tennis tournament in Melbourne on January 17, 2018. (Photo by Issei Kato/Reuters) 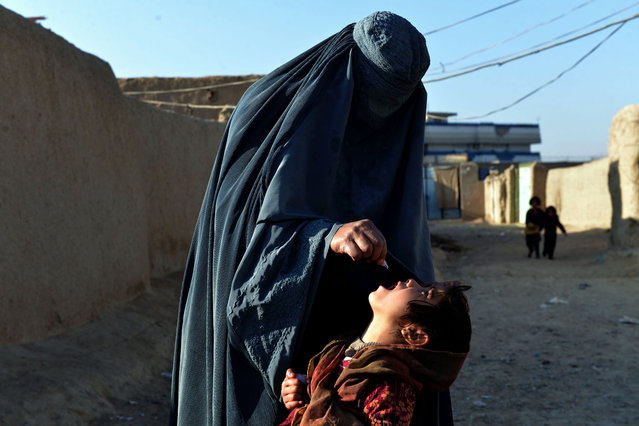 An Afghan health worker administers the polio vaccine to a child during a vaccination campaign in Kandahar on January 17, 2018 Polio, once a worldwide scourge, is now endemic in just three countries – Afghanistan, Nigeria and Pakistan. (Photo by Javed Tanveer/AFP Photo) 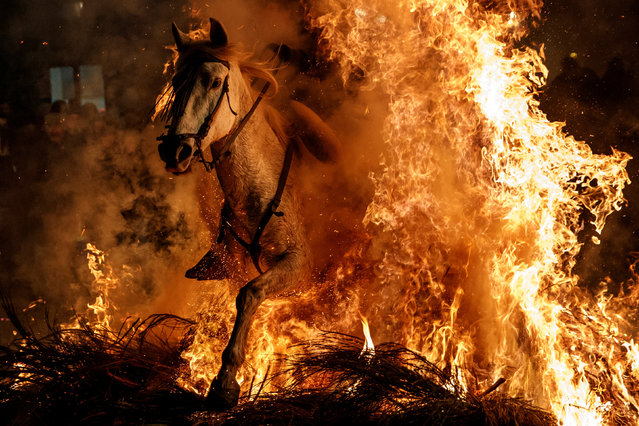 A man rides a horse through flames during the annual “Luminarias” celebration on the eve of Saint Anthony's day, Spain's patron saint of animals, in the village of San Bartolome de Pinares, northwest of Madrid, Spain, January 16, 2018. (Photo by Juan Medina/Reuters) 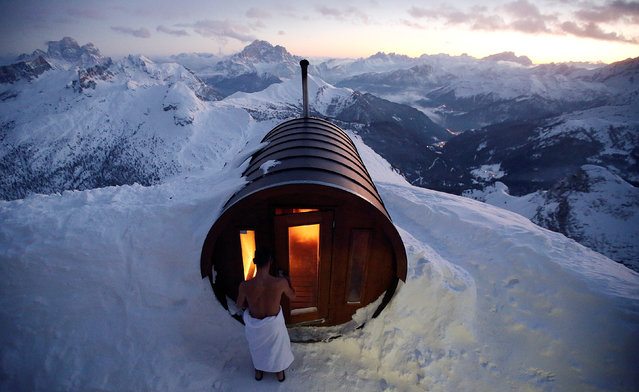 A person enter in sauna on the peak of Mount Lagazuoi in Cortina D'Ampezzo, Italy January 16, 2018. Picture taken January 16, 2017. (Photo by Stefano Rellandini/Reuters) 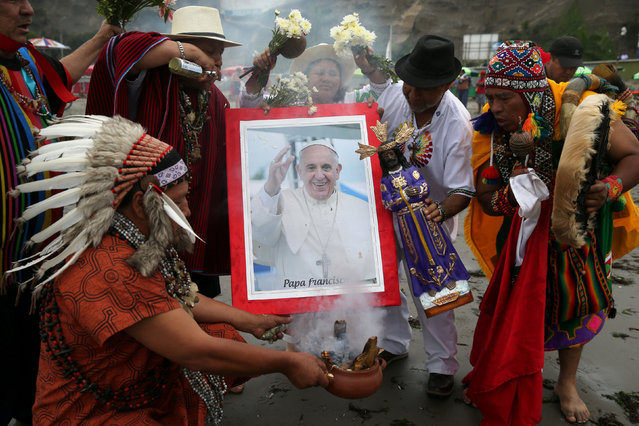 Peruvian shamans perform a ritual prior to the arrival of Pope Francis to Peru, at Pescadores beach in Chorrillos, Lima, Peru, January 17, 2018. (Photo by Guadalupe Pardo/Reuters) 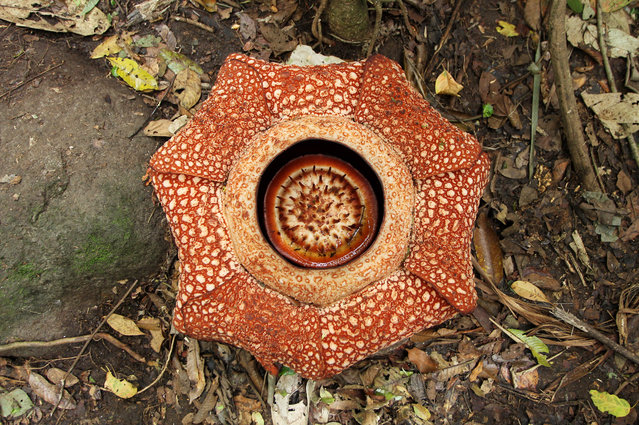 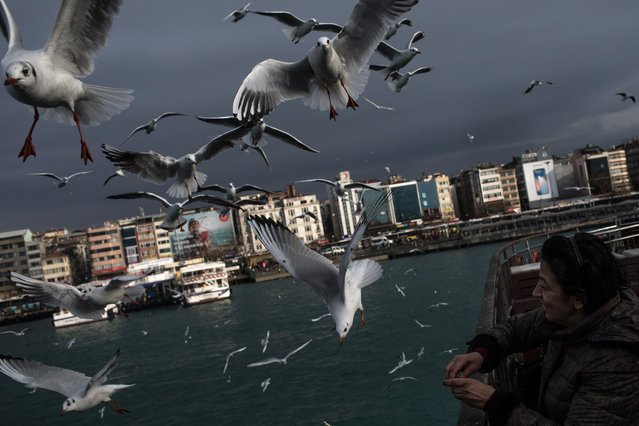