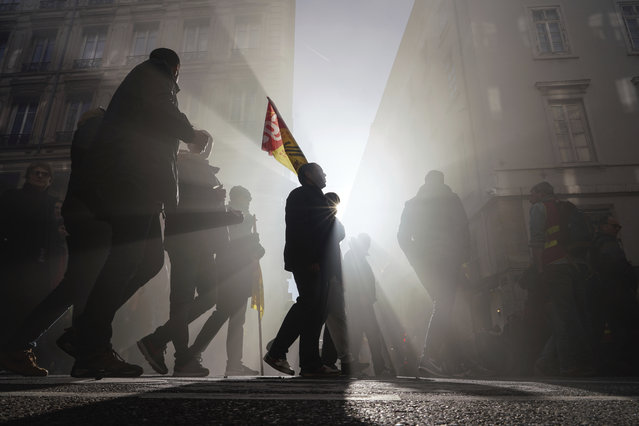 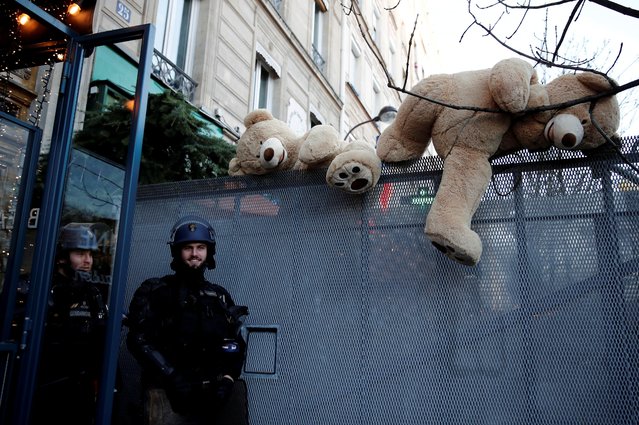 Honey-colored giant teddy bears are seen near French police during a demonstration against French government's pensions reform plans in Paris as France faces its 43rd consecutive day of strikes on January 16, 2020. (Photo by Benoit Tessier/Reuters) 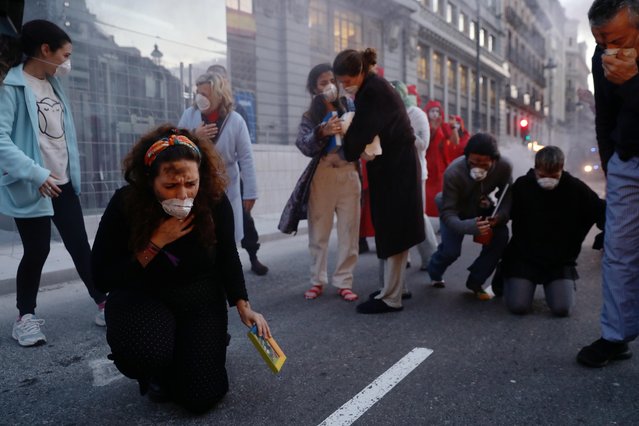 Extinction Rebellion members perform as they demonstrate over Australia's bushfires crisis in Madrid, Spain on January 16, 2020. (Photo by Susana Vera/Reuters) 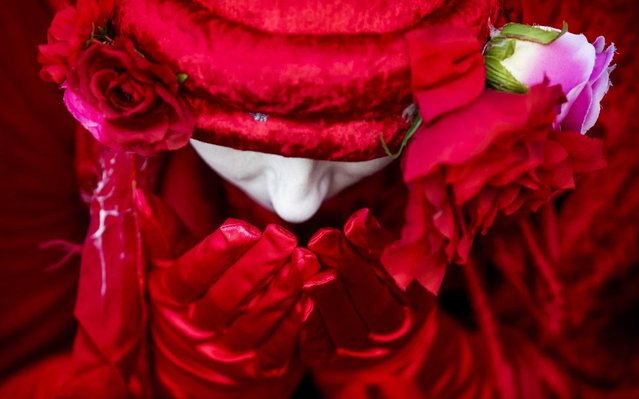 Demonstrators of Extinction Rebellion and Red Rebels during a climate march to the Australian Embassy in The Hague, The Netherlands, 16 January 2020. The activists are taking part in a worldwide campaign to draw attention to the fires in Australia. (Photo by Koen van Weel/EPA/EFE/Rex Features/Shutterstock) 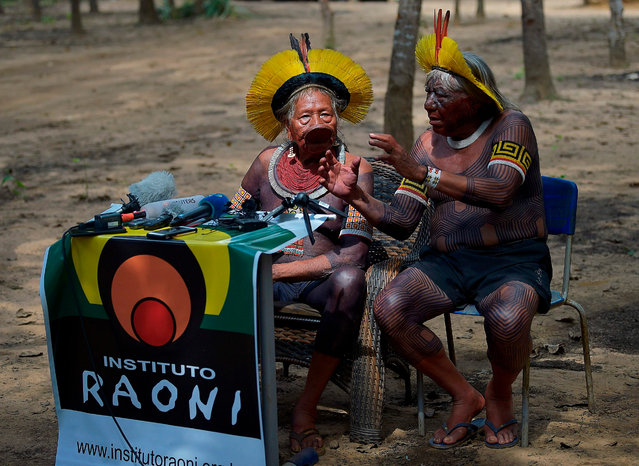 Indigenous leader Cacique Raoni of the Kayapo tribe (L) and an interpreter speak in Piaracu village, near Sao Jose do Xingu, Mato Grosso state, Brazil, on January 15, 2020. Brazil's government will propose legalizing oil and gas exploration as well as hydroelectric dam construction on indigenous land, a report said Saturday, citing a draft of a bill to be sent to Congress. (Photo by Carl de Souza/AFP Photo) 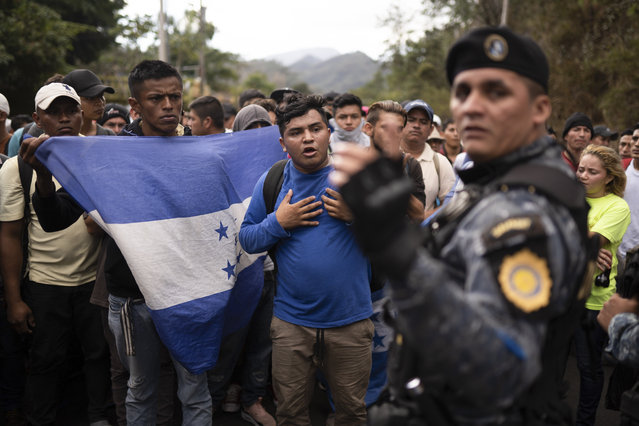 Honduran migrants walking in a group stop before Guatemalan police near Agua Caliente, Guatemala, Thursday, January 16, 2020, on the border with Honduras. Less-organized migrants, tighter immigration control by Guatemalan authorities and the presence of U.S. advisers have reduced the likelihood that the hundreds of migrants who departed Honduras will form anything like the cohesive procession the term “caravan” now conjures. (Photo by Santiago Billy/AP Photo) A teenage Honduran migrant traveling in a group of migrants cries as is he deported by Guatemalan police in Morales, Guatemala, Thursday, January 16, 2020. (Photo by Moises Castillo/AP Photo) 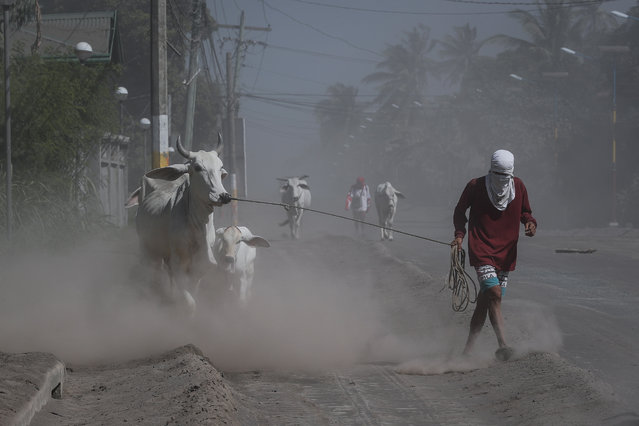 Residents pull their cows along a road in Agoncillo, Batangas, Philippines, 16 January 2020. The Philippine Institute of Volcanology and Seismology (PHIVOLCS) has kept the alert level at four, following Taal Volcano's eruption on 12 January 2020. (Photo by Mark R. Cristino/EPA/EFE) 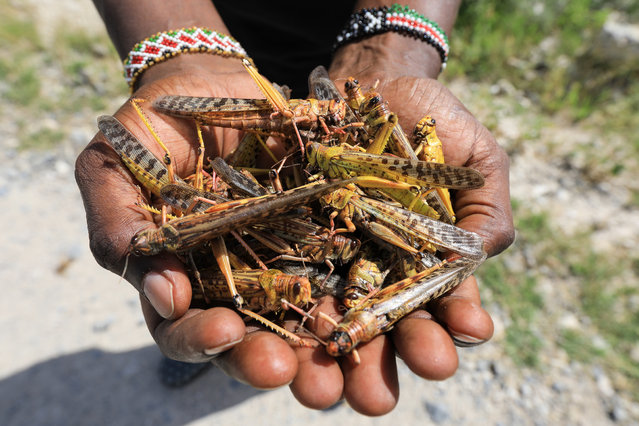 A local tour guide holds a handfull of dead desert locusts after an invasion in Shaba National Reserve in Isiolo, northern Kenya, 16 January 2020. Large swarms of desert locusts have been invading northern Kenya for weeks, after having infested some 70 thousand hectares of land in Somalia which the United Nations Food and Agriculture Organisation (FAO) has termed the 'worst situation in 25 years' in the Horn of Africa. FAO cautioned on 13 January 2020 that it poses an “unprecedented threat” to food security and livelihoods in the region. The government is spraying pesticide in the affected areas to battle the insects. (Photo by Daniel Irungu/EPA/EFE) 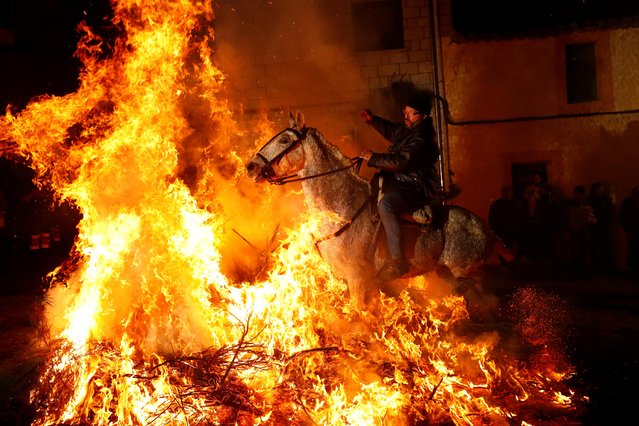 A rider goes through flames during the annual “Luminarias” celebration on the eve of Saint Anthony's day, Spain's patron saint of animals, in the village of San Bartolome de Pinares, northwest of Madrid, Spain, January 16, 2020. (Photo by Juan Medina/Reuters) 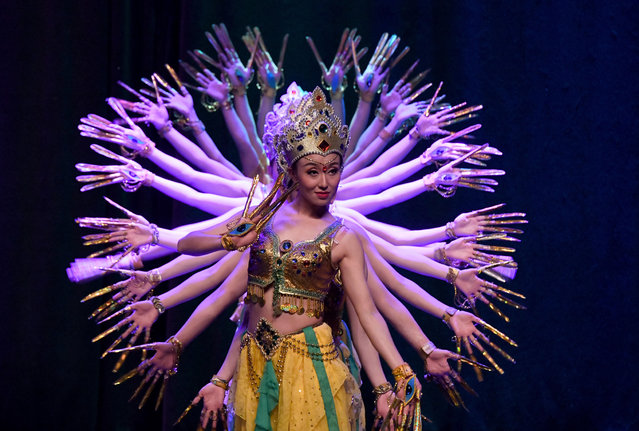 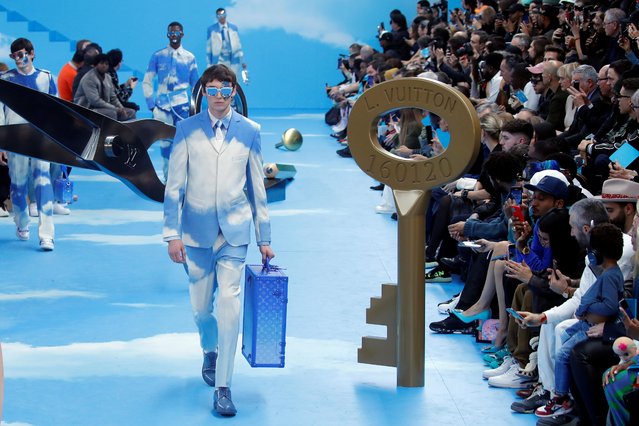 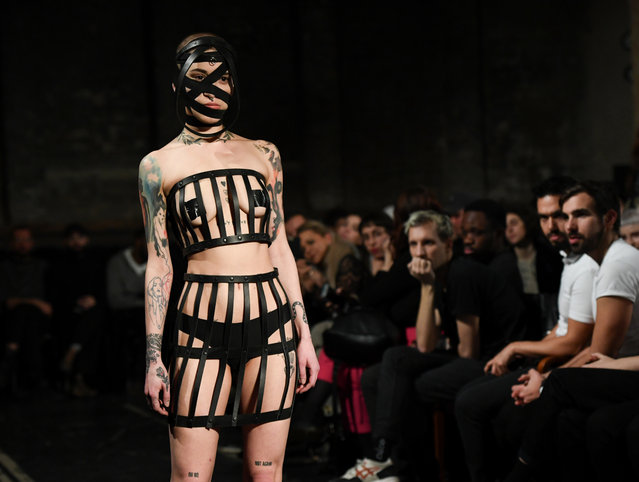 A model presents a creation by Obectra during Berlin Fashion Week in Berlin, Germany, January 15, 2020. (Photo by Annegret Hilse/Reuters) 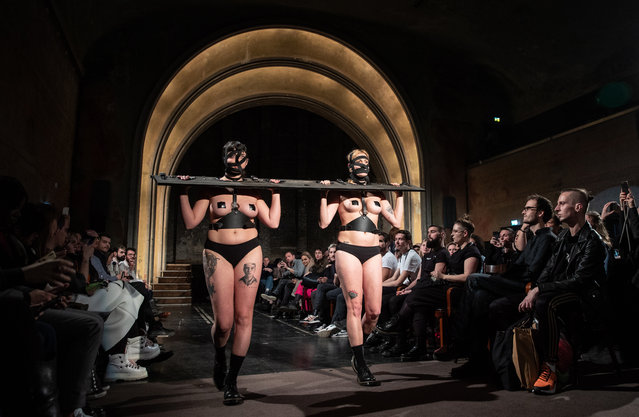