US President Donald Trump looks back as a question from the press is shouted after a press conference at the World Economic Forum in Davos, Switzerland, on January 22, 2020. (Photo by Jim Watson/AFP Photo) 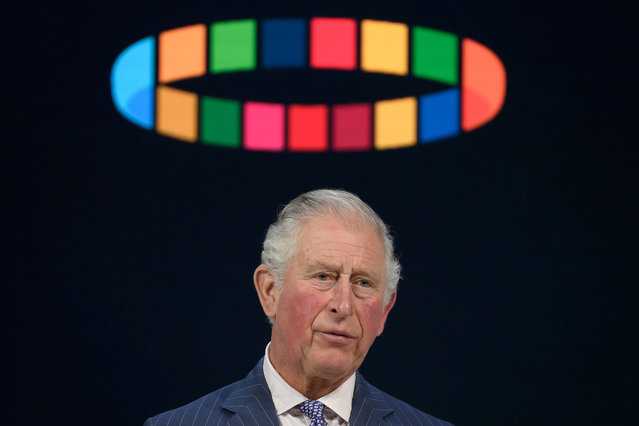 German Chancellor Angela Merkel (C) watches a performance of a carnival dance group as she poses with members of carnival orders during a reception on January 22, 2020 at the Chancellery in Berlin. (Photo by Tobias Schwarz/AFP Photo) 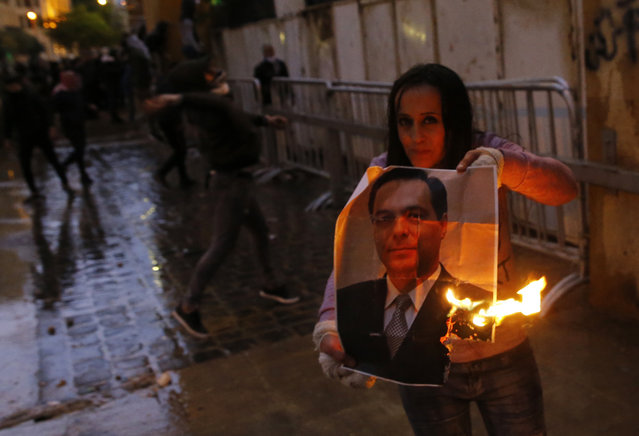 An anti-government protester burns a picture of new Lebanese Prime Minister Hassan Diab during ongoing protests in Beirut, Lebanon, Wednesday, January 22, 2020. Lebanon's new government held its first meeting Wednesday, a day after it was formed following a three-month political vacuum, with the prime minister saying his Cabinet will adopt financial and economic methods different than those of previous governments. (Photo by Bilal Hussein/AP Photo) 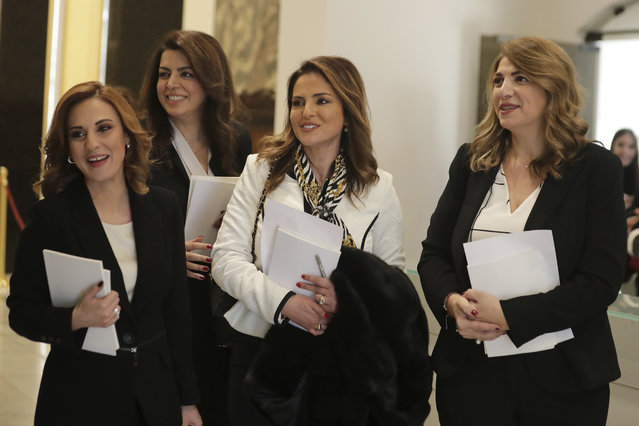 The women ministers in the new Lebanese government, from left to right; Minister of Youth and Sports Vartie Ohanian, Minister of Displaced Ghada Shreim, Minister of Information Manal Abdul-Samad and Justice minister Marie-Claude Najem posing for photographs after the first cabinet meeting, at the presidential palace, in Baabda, east of Beirut, Lebanon, in Beirut, Lebanon, Wednesday, January 22, 2020. A new Cabinet has been announced last night in crisis-hit Lebanon, breaking a months-long impasse amid mass protests against the country's ruling elite. (Photo by Hassan Ammar/AP Photo) 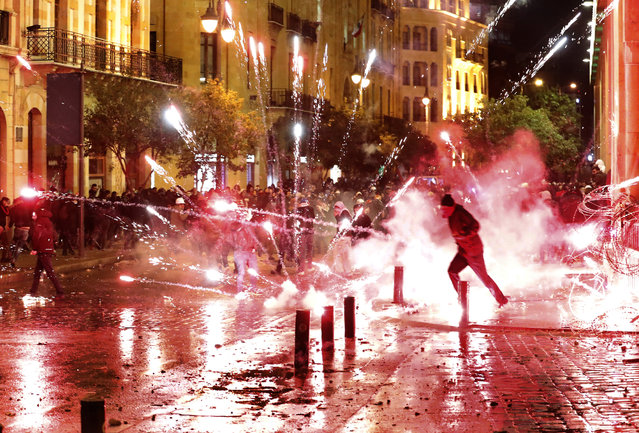 Anti-government protesters throw firecrackers at riot police during a demonstration against the new government, near Parliament Square, in Beirut, Lebanon, early Wednesday, January 22, 2020. A new Cabinet was announced in crisis-hit Lebanon late Tuesday, breaking a months-long impasse amid mass protests against the country's ruling elite and a crippling financial crisis, but demonstrations and violence continued. (Photo by Hussein Malla/AP Photo) 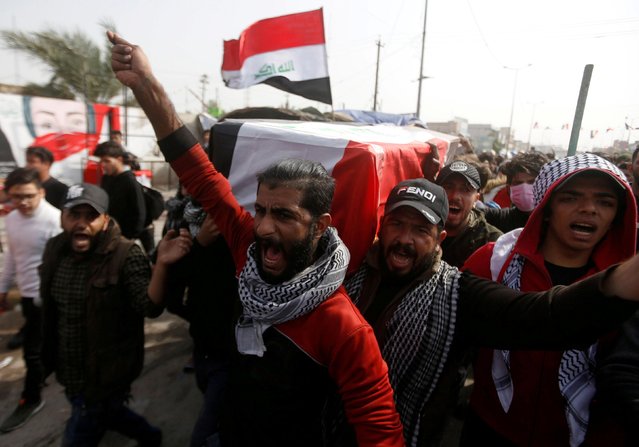 Mourners carry a coffin of an Iraqi activist female protester, who was killed by an unknown gunmen at anti-government protests, during a funeral in Basra, Iraq on January 22, 2020. (Photo by Essam al-Sudani/Reuters) 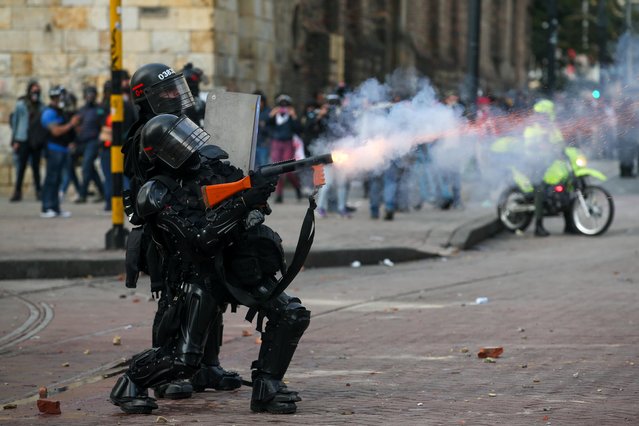 Riot police in action during a protest against the government of Colombia's President Ivan Duque, in Bogota, Colombia, January 21, 2020. (Photo by Luisa Gonzalez/Reuters) Passengers wear masks to prevent an outbreak of a new coronavirus in a subway station, in Hong Kong, Wednesday, January 22, 2020. The first case of coronavirus in Macao was confirmed on Wednesday, according to state broadcaster CCTV. The infected person, a 52-year-old woman, was a traveller from Wuhan. (Photo by Kin Cheung/AP Photo) 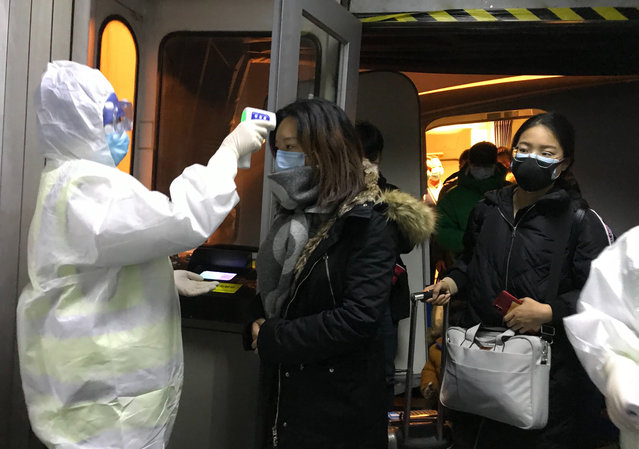 Health Officials in hazmat suits check body temperatures of passengers arriving from the city of Wuhan Wednesday, January 22, 2020, at the airport in Beijing, China. Nearly two decades after the disastrously-handled SARS epidemic, China’s more-open response to a new virus signals its growing confidence and a greater awareness of the pitfalls of censorship, even while the government is as authoritarian as ever. (Photo by Emily Wang/AP Photo) 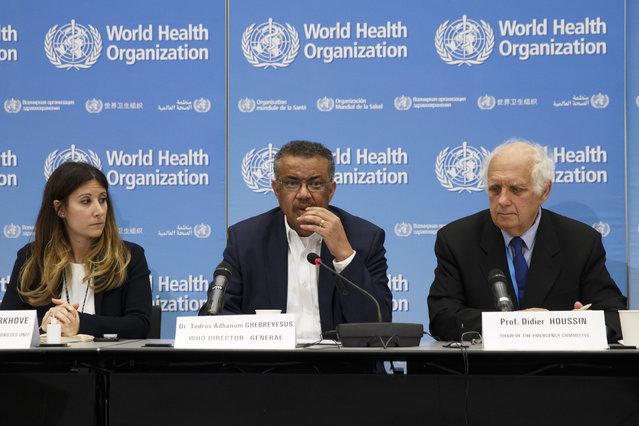 From left, Maria van Kerkhove, Head of Emerging Diseases and Zoonoses Unit, Director General of the World Health Organization, WHO, Tedros Adhanom Ghebreyesus, and Professor Didier Houssin, the Chair of the Emergency Committee hold a press conference after an Emergency Committee meeting on what scientists have identified as a new coronavirus, at the World Health Organization (WHO) headquarters in Geneva, Switzerland, Wednesday, January 22, 2020. Health authorities are closely watching an outbreak of respiratory illness caused by a new virus from China. Governments are stepping up surveillance of airline passengers from central China and taking other steps to try to control the outbreak. (Photo by Salvatore Di Nolfi/Keystone via AP Photo) 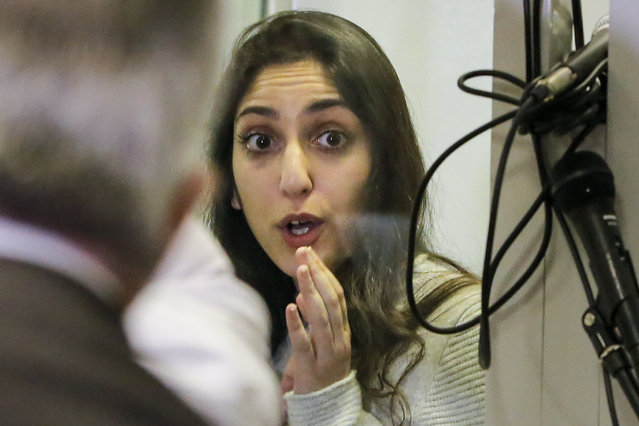 Israeli Naama Issachar gestures during an appeal hearings in a courtroom in Moscow, Russia, Thursday, December 19, 2019. An Israeli backpacker serving prison time in Russia on a drug conviction is appealing her case and says she was wasn't provided a translator or lawyer after being detained at a Moscow airport. She was arrested in April in Moscow's Sheremetyevo Airport, where she was transferring flights en route from India to Israel. More than nine grams of hashish were found in her luggage. She was later sentenced to 7 1/2 years. (Photo by Alexander Zemlianichenko Jr./AP Photo) A woman holds piles of vegetables transported by motorcycle along a street in Phnom Penh, Cambodia on January 22, 2020. (Photo by Tang Chhin Sothy/AFP Photo) 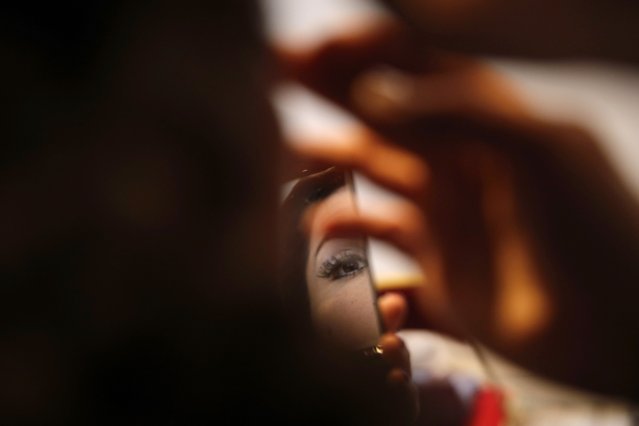 A model checks herself in a mirror backstage prior to the Franck Sorbier Haute Couture Spring/Summer 2020 fashion collection presented Tuesday January 21, 2020 in Paris. (Photo by Christophe Ena/AP Photo) 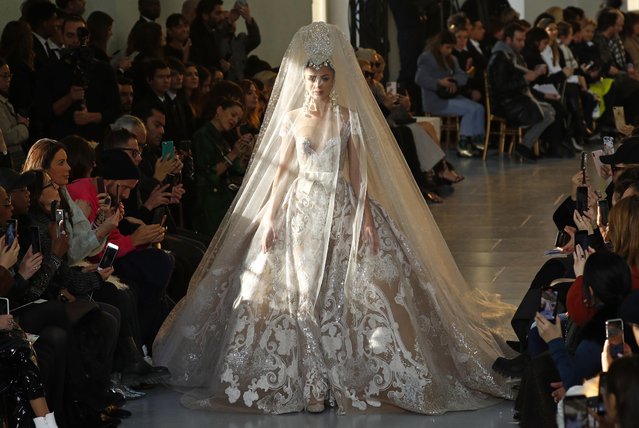 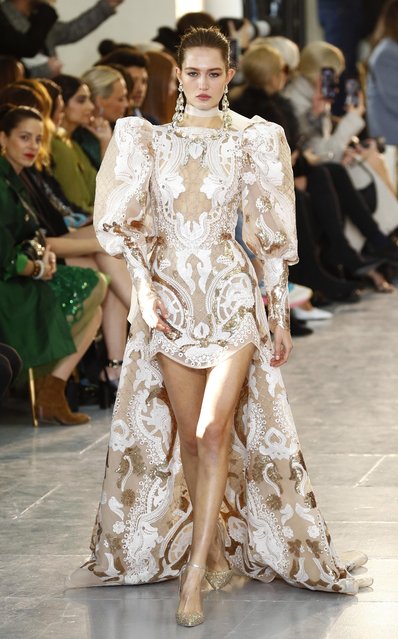 A model presents a creation by designer Elie Saab as part of his Haute Couture Spring/Summer 2020 collection show in Paris, France, January 22, 2020. (Photo by Francois Lenoir/Reuters) 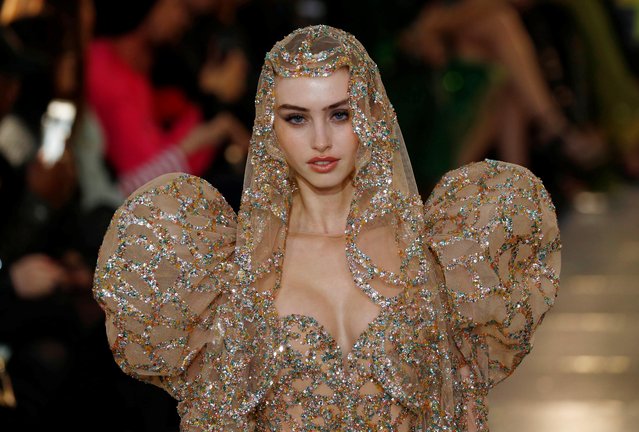