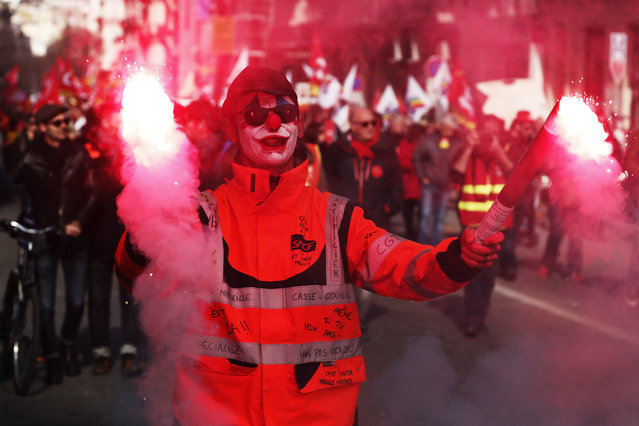 A protestor lights flares as he participates in a demonstration against pension reforms in Marseille, France, 29 January 2020. Unions representing railway and transport workers and many others in the public sector have called for a consecutive general strike and demonstration to protest against French government's reform of the pension system. (Photo by Guillaume Horcajuelo/EPA/EFE) 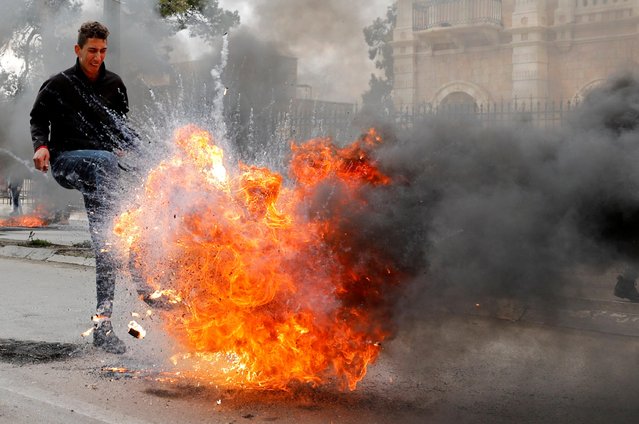 A Palestinian demonstrator kicks a burning tire during a protest against U.S. President Donald Trump's Middle East peace plan, in Bethlehem in the Israeli-occupied West Bank on January 29, 2020. (Photo by Mussa Qawasma/Reuters) 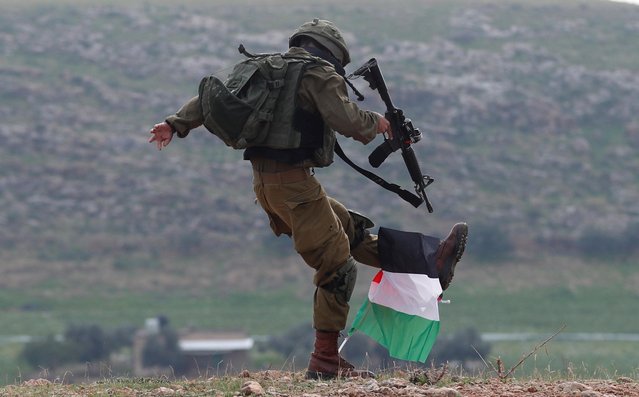 An Israeli soldier kicks a Palestinian flag during a protest against Trump's Middle East peace plan, in Jordan Valley in the Israeli-occupied West Bank on January 29, 2020. (Photo by Mohamad Torokman/Reuters) 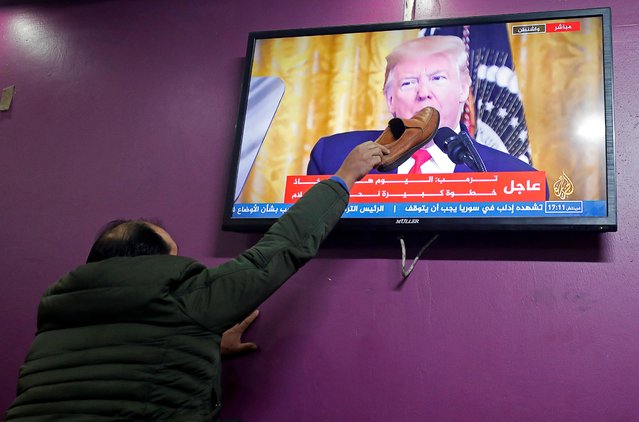 A Palestinian man places a shoe on a television screen broadcasting the announcement of Mideast peace plan by U.S. President Donald Trump, in a coffee shop in Hebron in the Israeli-occupied West Bank on January 28, 2020. (Photo by Mussa Qawasma/Reuters) 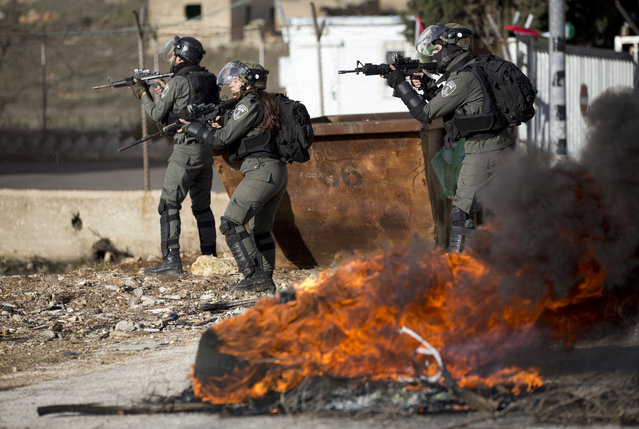 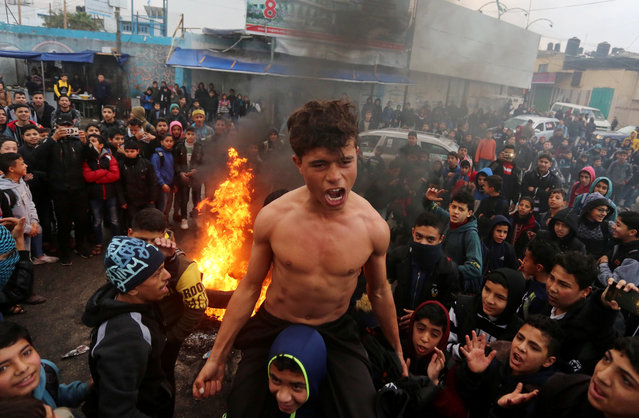 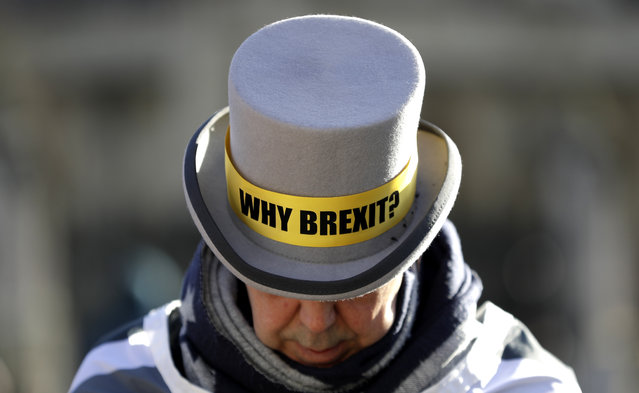 Why Brexit? written on the hat of Anti-Brexit campaigner Steve Bray as he stands outside Parliament in London, Wednesday, January 29, 2020. Britain officially leaves the European Union on Friday after a debilitating political period that has bitterly divided the nation since the 2016 Brexit referendum. (Photo by Kirsty Wigglesworth/AP Photo) 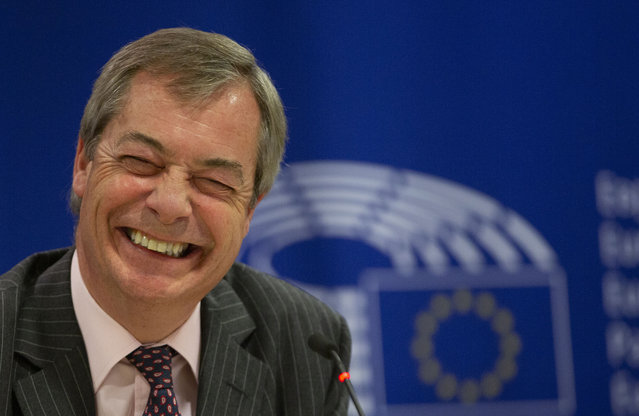 Brexit Party leader Nigel Farage speaks during a media conference at the European Parliament in Brussels, Wednesday, January 29, 2020. The U.K. is due to leave the EU on Friday, Jan. 31, 2020, the first nation in the bloc to do so. It then enters an 11-month transition period in which Britain will continue to follow the bloc's rules while the two sides work out new deals on trade, security and other areas. (Photo by Virginia Mayo/AP Photo) 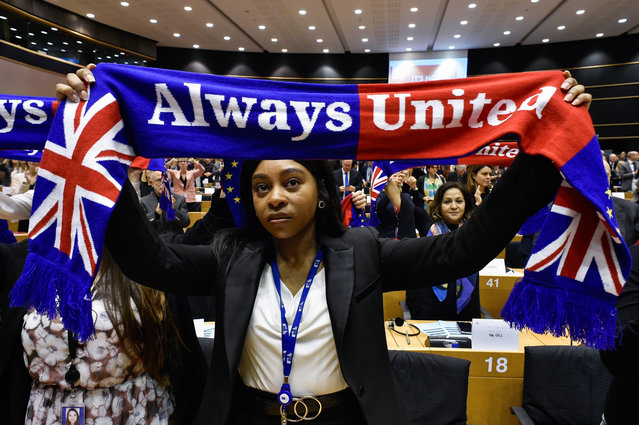 A member of the Group of the Progressive Alliance of Socialists and Democrats in the European Parliament holds a scarf depucting the European Union and the Union Jack flags during a ceremony at the Europa Building in Brussels, on January 29, 2020, as Brexit Day is to be set in stone when the European Parliament casts a vote ratifying the terms of Britain's divorce deal from the EU. (Photo by John Thys/AFP Photo) 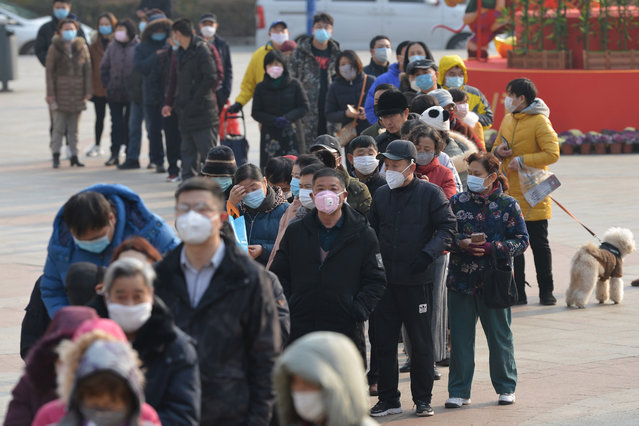 People line up outside a drugstore to buy medical masks in Nanjing, Jiangsu province, China, 29 January 2020. According to media reports, coronavirus, which in severe cases causes pneumonia, killed 132 people and infected nearly 6,000, mainly in China. Governments around the world are taking preventative measures to health the spread of the virus. (Photo by Fang Dongxu/EPA/EFE) 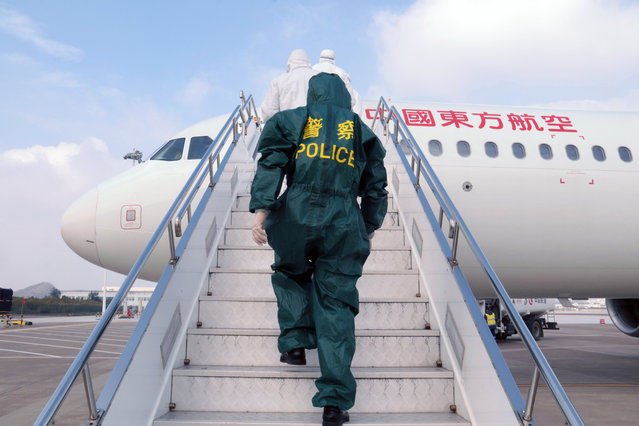 Police and medical personnel enter a plane to take temperature tests of passengers on board at the airport in Zhoushan City, Zhejiang Province, China, 28 January 2020. The outbreak of coronavirus in China has so far claimed at least 100 lives and infected more than 4,500 others, according to media reports. Governments around the world are taking preventative measures to health the spread of the virus. (Photo by EPA/EFE/China Stringer Network) 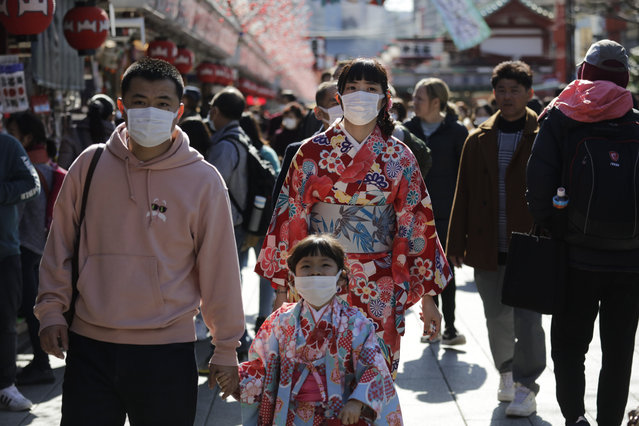 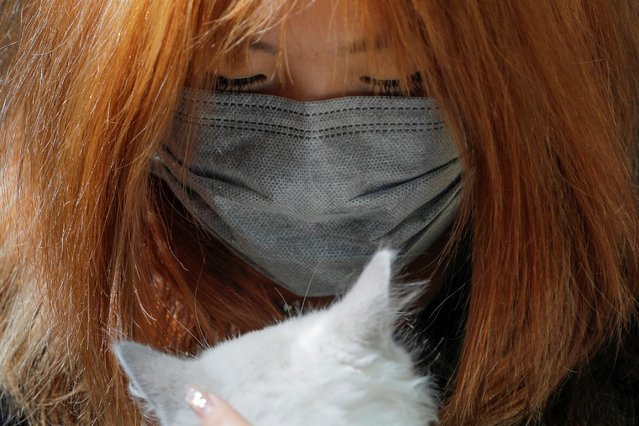