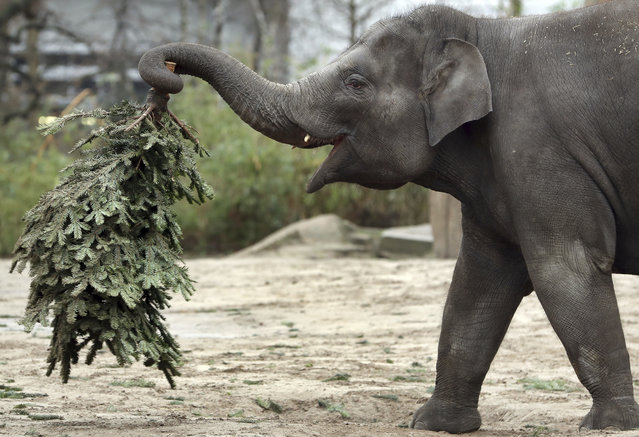 Elephant “Anchali” lifts a Christmas tree at its enclosure at the zoo in Berlin, Germany, Tuesday, January 2, 2018. Every year discarded Christmas trees are offered to the elephants as a snack. (Photo by Michael Sohn/AP Photo) 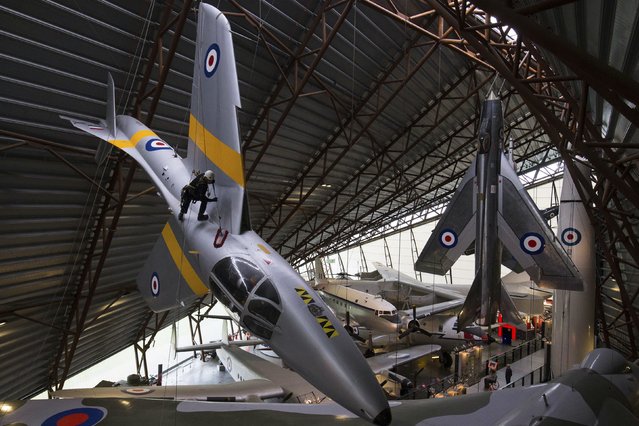 The annual high- level aircraft cleaning and maintenance takes place at the RAF Cosford Museum in Shifnal, England, Tuesday January 2, 2018. The work is carried out by a specialist cleaning company, focusing on the suspended aircraft currently displayed within the Museum' s National Cold War Exhibition. (Photo by Aaron Chown/PA Wire via AP Photo) Members of the public wearing fancy dress react to the water as they join around 1100 New Year swimmers, many in costume, in front of the Forth Rail Bridge during the annual Loony Dook Swim in the River Forth on January 1, 2018 in South Queensferry, Scotland. Tens of thousands of people gathered last night in Edinburgh and other events across Scotland to see in the New Year at Hogmanay celebrations. (Photo by Jeff J. Mitchell/Getty Images) 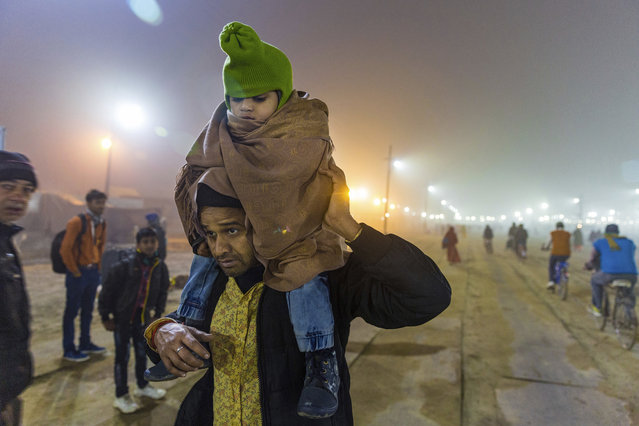 A Hindu devotee carries his son on his shoulders after taking a ritualistic dip at the “Sangam”, the meeting point of Indian holy rivers the Ganges and the Yamuna, on the auspicious day of “Paush Purnima” during the annual traditional fair of Magh Mela in Allahabad, India, Tuesday, January 2, 2018. Hundreds of thousands of devout Hindus are expected to take the holy dips at the confluence during the astronomically auspicious period of over 45 days celebrated as Magh Mela. (Photo by Rajesh Kumar Singh/AP Photo) 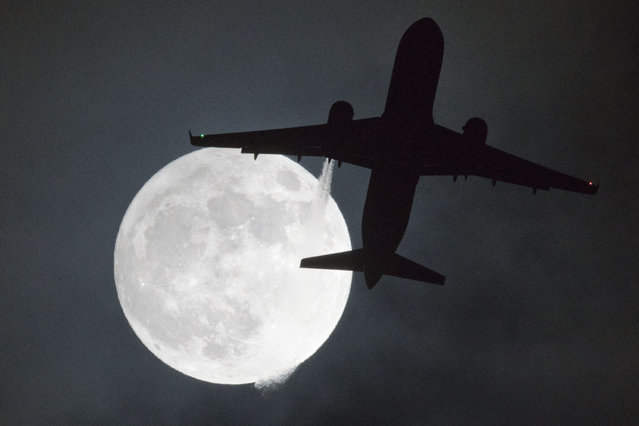 A plane flys in front of a “super moon” or “wolf moon” on its approach to London Heathrow Airport on January 1, 2018. (Photo by Justin Tallis/AFP Photo) 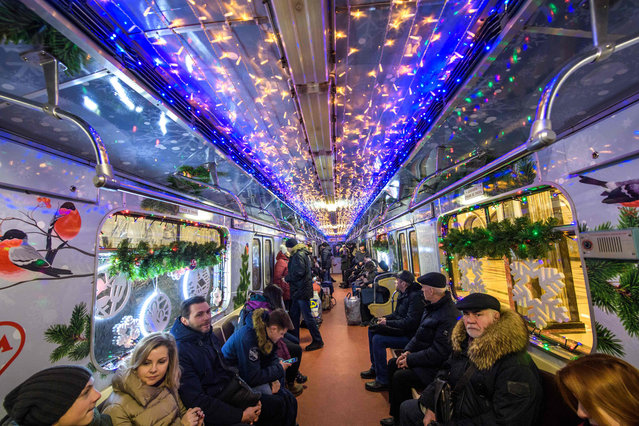 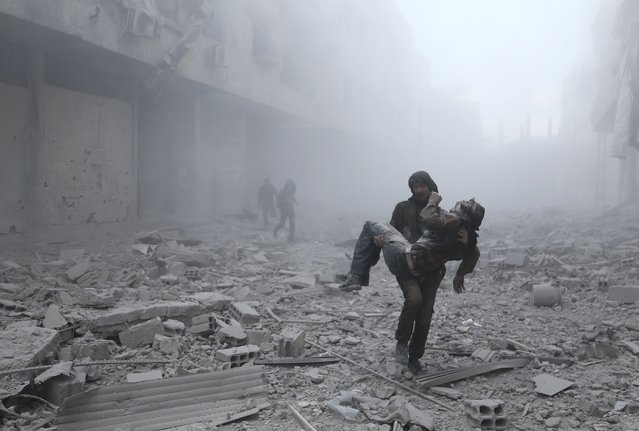 A wounded man is carried following an air strike on the rebel-held besieged town of Arbin, in the eastern Ghouta region on the outskirts of the capital Damascus on January 2, 2018. (Photo by Abdulmonam Eassa/AFP Photo) 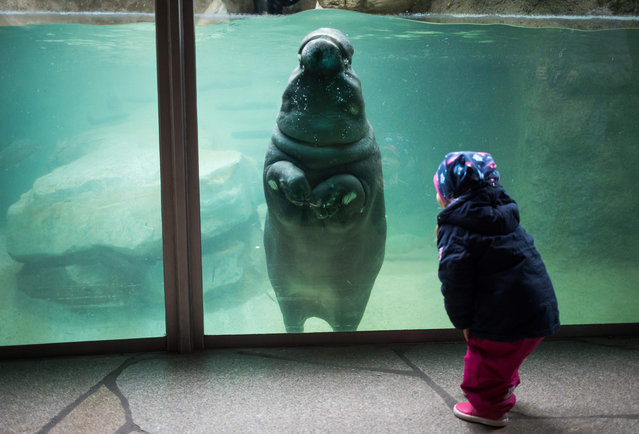 A young visitor interacts with a baby hippopotamus swimming in its enclosure at the Berlin Zoo on January 1, 2018. Tourists and locals flocked to the zoo in the German capital on the unseasonably warm first day of the year. (Photo by Odd Andersen/AFP Photo) 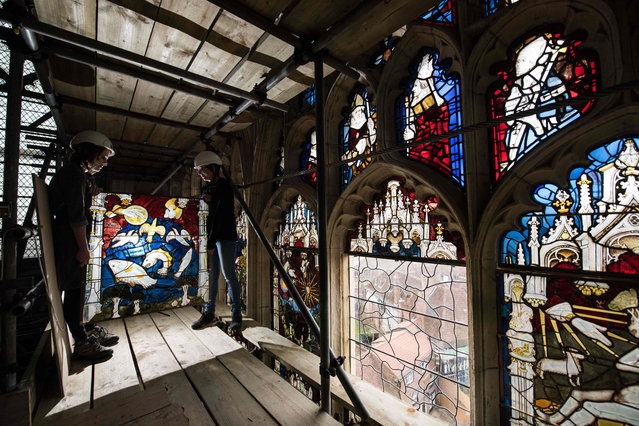 Conservators Zoe Harrigan (R) and Anna Milsom replace the final stained glass panel in York Minster' s 600 year- old Great East Window, following a 10- year conservation and restoration project, in York, northern England on January 2, 2018. All 311 panels of the window, which is the country' s largest single expanse of medieval stained glass, were removed and restored by York Glaziers Trust - a task which took 92,400 hours and cost 11.5 million pounds. The window was created between 1405 and 1408 by the master glazier John Thornton, who was paid 56 pounds by the Chapter of York, and it depicts the beginning and end of all things from the book of Genesis to the book of Revelation. (Photo by Oli Scarff/AFP Photo) 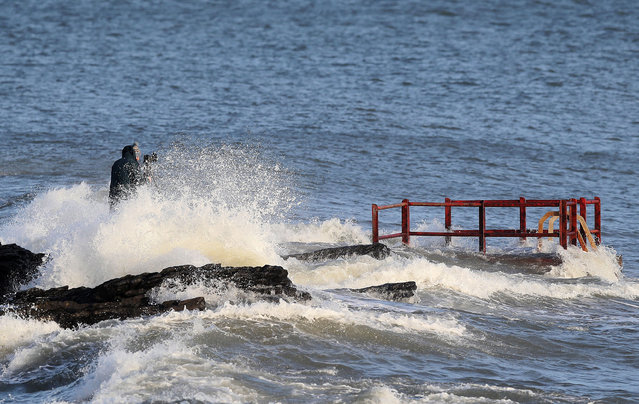 A man taking photographs gets caught by crashing waves at High Rock, Portmarnock, Ireland on January 2, 2018. Storm Eleanor, the fifth named storm of the season will bring a very windy spell to the UK and Ireland on Tuesday night and Wednesday. (Photo by Brian Lawless/PA Wire) 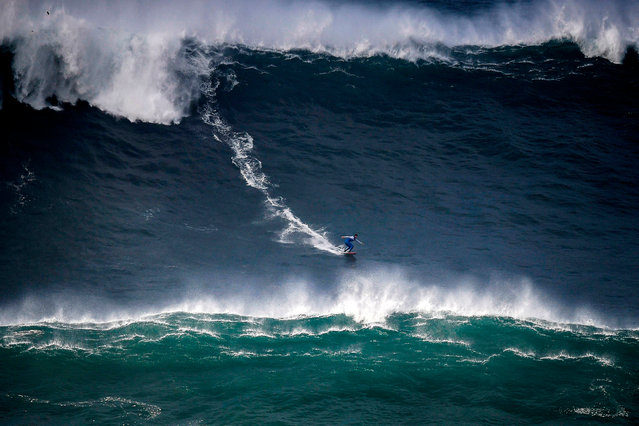 Brazilian surfer Lucas Chumbo rides a wave during the first surf session of 2018 at Praia do Norte in Nazare on January 1, 2018. (Photo by Patricia de Melo Moreira/AFP Photo) 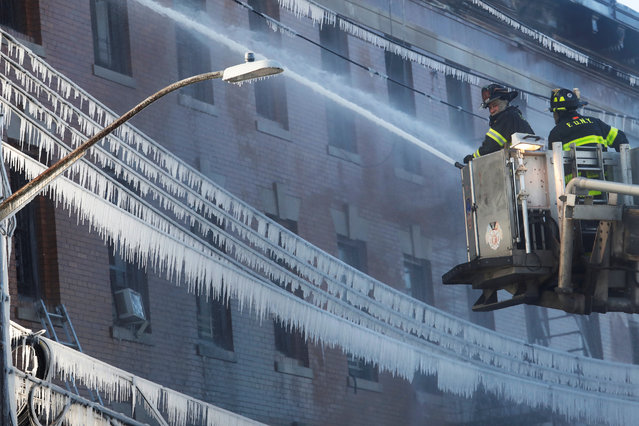 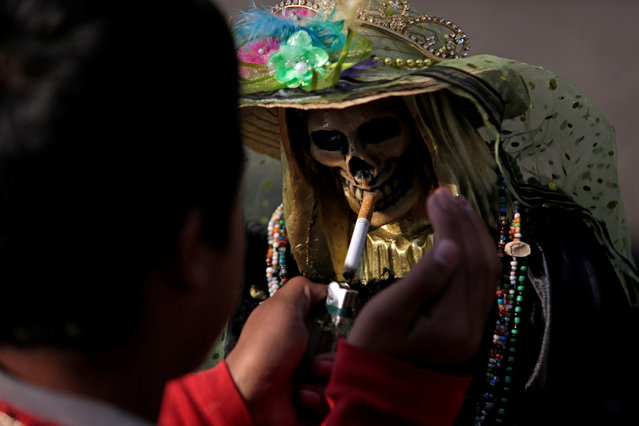 A devotee lights a cigaret to a figure of Santa Muerte or The Saint of Death during the first prayer of the New Year at Tepito neighborhood in Mexico City on January 1, 2018. (Photo by Daniel Becerril/Reuters) 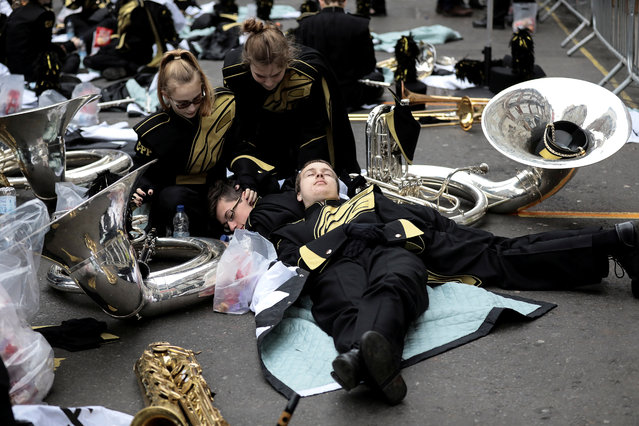 Members of a marching band take a break before performing during the New Year's Day parade in London, Britain on January 1, 2018. (Photo by Simon Dawson/Reuters) 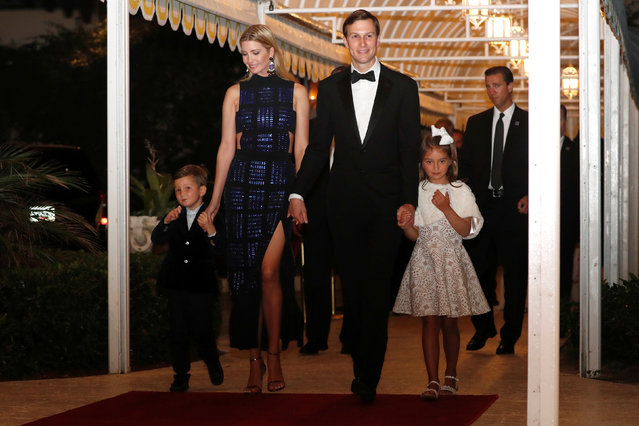 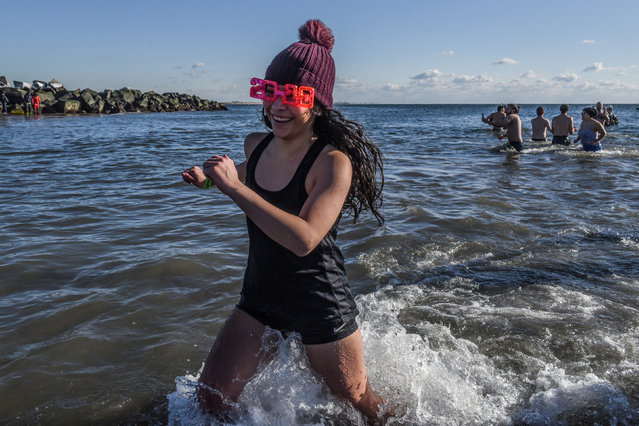 Swimmers run into the water of the Atlantic Ocean on Coney Island Beach in Brooklyn, New York City on January 1, 2018. (Photo by Stephanie Keith/Reuters) 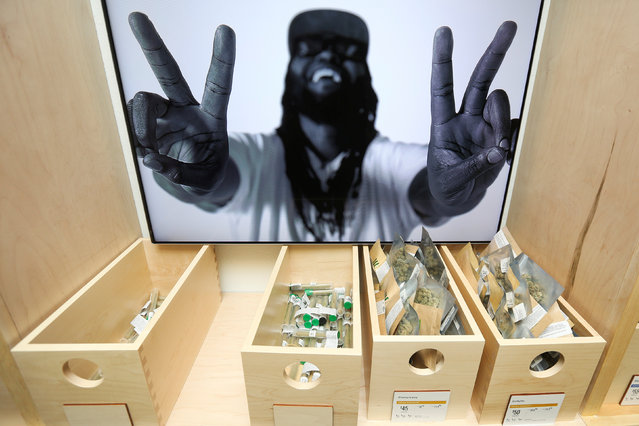 Marijuana is seen for sale at a dispensary in Oakland on the first day of legalized recreational marijuana sales in California on January 1, 2018. (Photo by Elijah Nouvelage/Reuters) 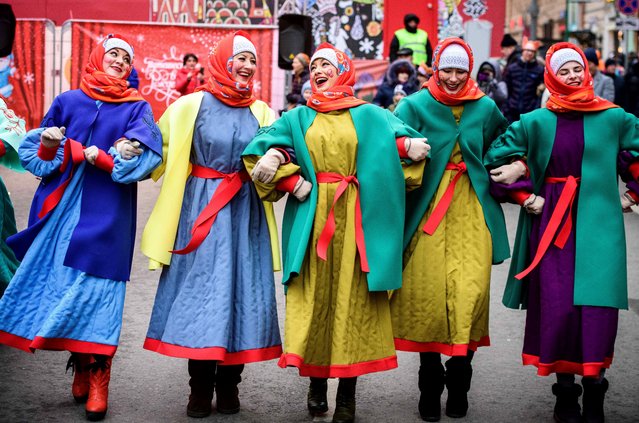 Street performers dance on Tverskaya street during a festival marking the New Year and Christmas in central Moscow on January 2, 2018. Russia celebrate the Orthodox Christmas on January 7th. (Photo by Mladen Antonov/AFP Photo) 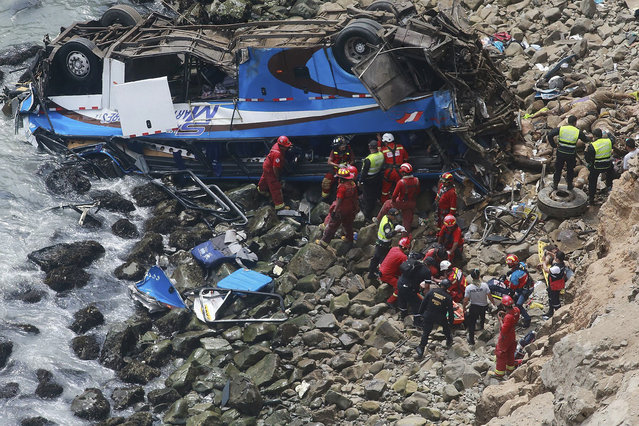 In this photo provided by the government news agency Andina, firemen recover bodies from a bus that fell off a cliff after it was hit by a tractor-trailer rig, in Pasamayo, Peru, Tuesday, Jan 2, 2018. A Peruvian police official says at least 25 people died, and that there were more than 50 people on the bus. (Vidal Tarky, Andina News Agency via AP) 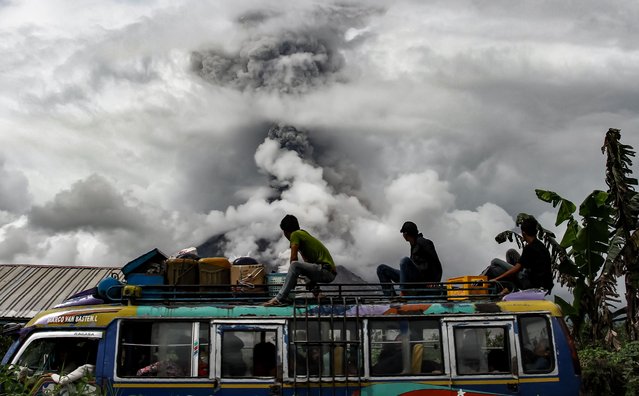 Indonesian bus passengers watch as Mount Sinabung spews thick smoke in Karo, North Sumatra on January 2, 2018. Mount Sinabung roared back to life in 2010 for the first time in 400 years, after another period of inactivity it erupted once more in 2013, and has remained highly active since. (Photo by Ivan Damanik/AFP Photo) 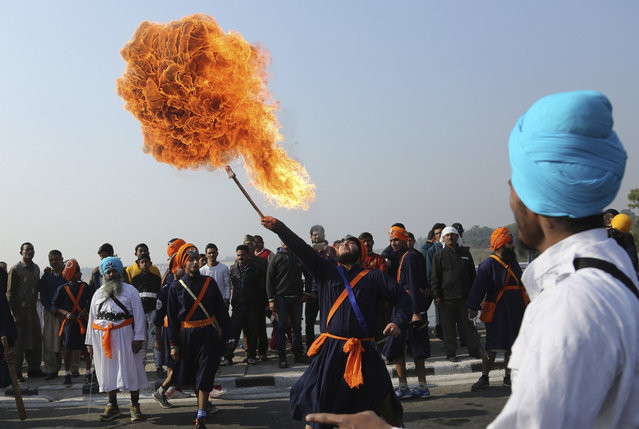