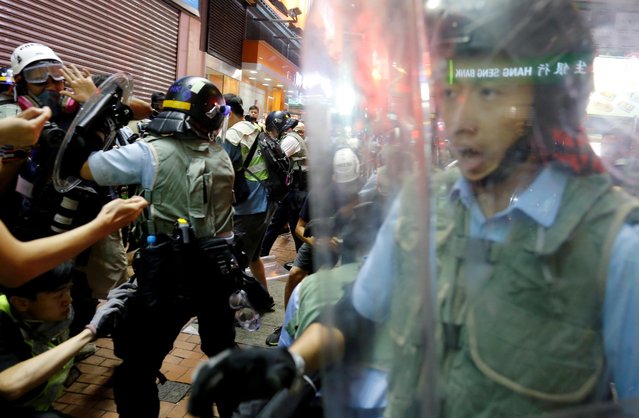 Riot police officers try to disperse anti-extradition bill protesters during a demonstration in Mong Kok area in Hong Kong, China, July 7, 2019. Tens of thousands of anti-government protesters rallied outside a controversial train station linking the territory to the Chinese mainland on July 7, the latest mass show of anger as activists try to keep pressure on the city's pro-Beijing leaders. (Photo by Thomas Peter/Reuters) 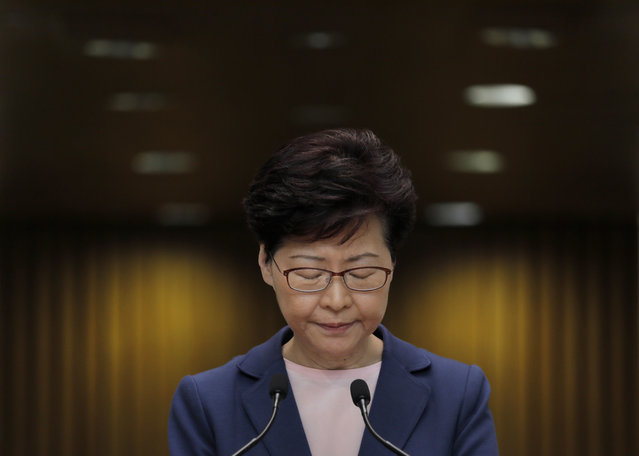 Hong Kong Chief Executive Carrie Lam pauses during a press conference in Hong Kong, Tuesday, July 9, 2019. Lam said Tuesday the effort to amend an extradition bill was dead, but it wasn't clear if the legislation was being withdrawn as protesters have demanded. (Photo by Vincent Yu/AP Photo) 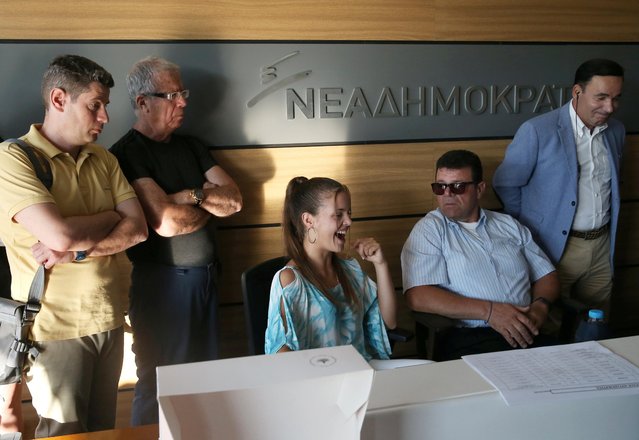 Supporters of New Democracy conservative party watch the announcement of first exit polls at the party's headquarters in Athens, Greece on July 7, 2019. (Photo by Costas Baltas/Reuters) 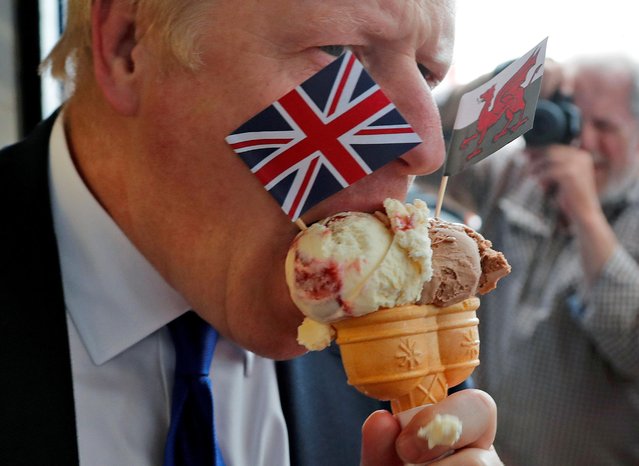 Boris Johnson, former U.K. foreign secretary, eats an ice cream cone as part of his Conservative Party leadership campaign tour, in Barry Island, U.K., on Saturday, July 6, 2019. Johnson, looking set for a landslide victory over rival Jeremy Hunt in the race to be Britain's next prime minister, has won the backing of a senior member of the cabinet: Home Secretary Sajid Javid. (Photo by Frank Augstein/Pool via Reuters) 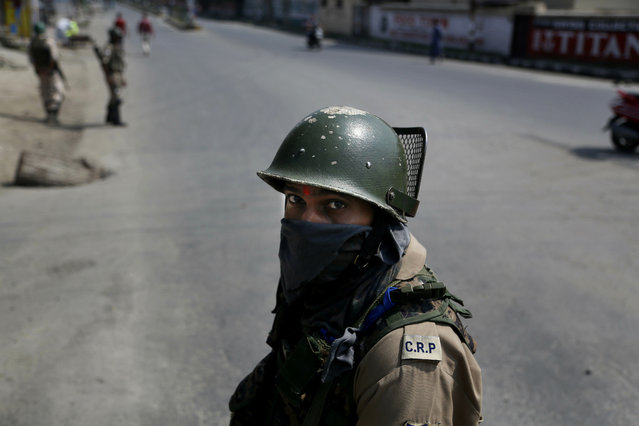 An Indian paramilitary soldier guards during restrictions in Srinagar, Indian controlled Kashmir, Monday, July 8, 2019. Authorities imposed restrictions in some parts of Srinagar after separatists called for a strike making the death anniversary of Kashmiri rebel leader Burhan Wani who was killed by Indian security forces on July 8, 2016. (Photo by Mukhtar Khan/AP Photo) 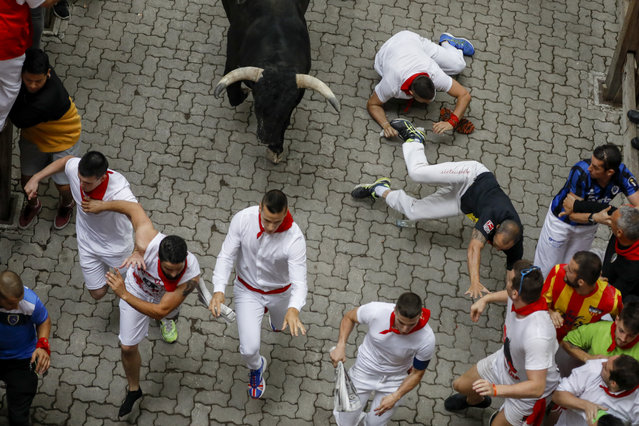 Revellers run with Puerto de San Lorenzo's fighting bulls before entering the bullring during the second day of the San Fermin Running of the Bulls festival on July 07, 2019 in Pamplona, Spain. The annual Fiesta de San Fermin, made famous by the 1926 novel of US writer Ernest Hemmingway entitled “The Sun Also Rises”, involves the daily running of the bulls through the historic heart of Pamplona to the bull ring. (Photo by Pablo Blazquez Dominguez/Getty Images) 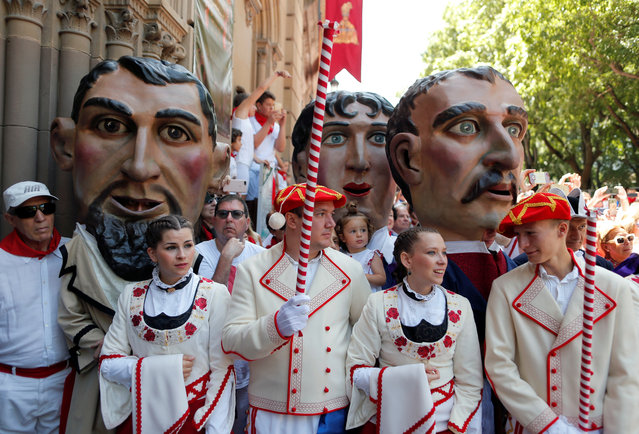 “Cabezudos” (Big heads) and dancers take part in a procession of the Saints Day after the first running of the bulls at the San Fermin festival in Pamplona, Spain, July 7, 2019. (Photo by Jon Nazca/Reuters) 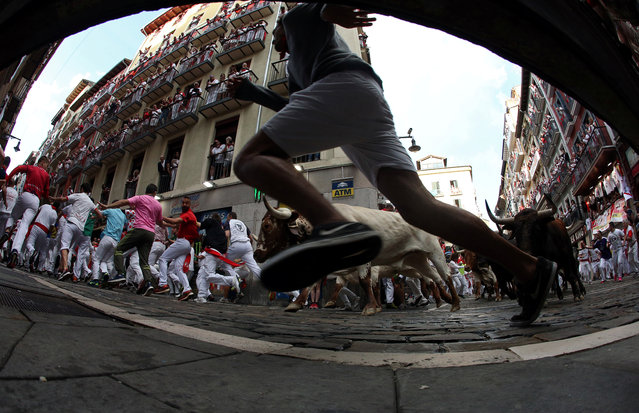 Revellers sprint in front of bulls and steers during the second running of the bulls at the San Fermin festival in Pamplona, Spain, July 8, 2019. (Photo by Jon Nazca/Reuters) 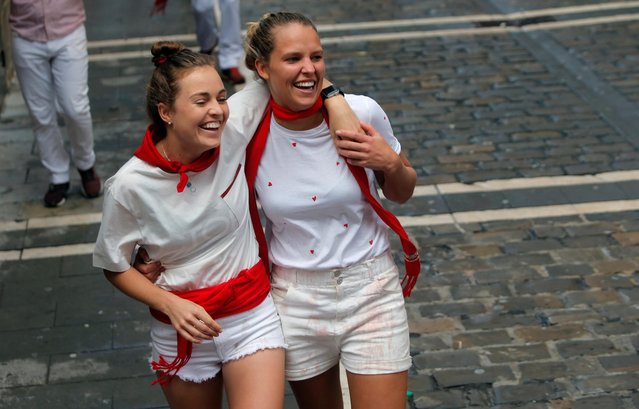 Revellers react after taking part in the second running of the bulls at the San Fermin festival in Pamplona, Spain, July 8, 2019. (Photo by Jon Nazca/Reuters) 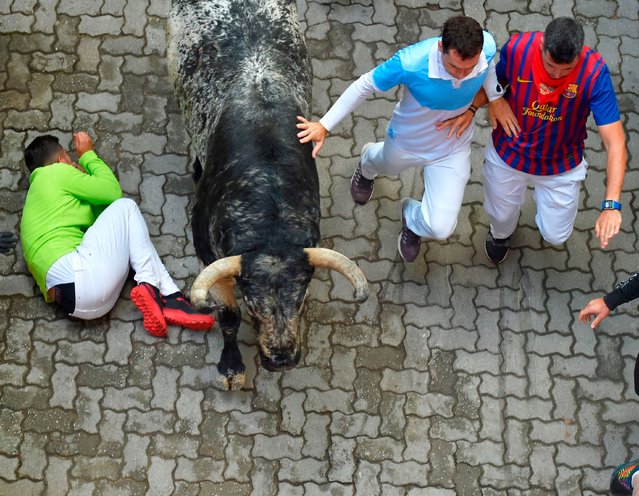 Participants run next to Cebada Gago fighting bulls on the second bullrun of the San Fermin festival in Pamplona, northern Spain on July 8, 2019. On each day of the festival six bulls are released at 8:00 a.m. (0600 GMT) to run from their corral through the narrow, cobbled streets of the old town over an 850-meter (yard) course. Ahead of them are the runners, who try to stay close to the bulls without falling over or being gored. (Photo by Ander Gillenea/AFP Photo) 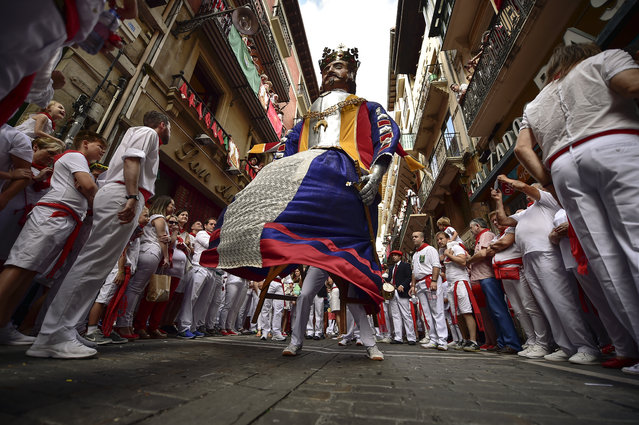 A giant member of San Fermin Comparsa Parade take part in a procession at the San Fermin Festival in Pamplona, northern Spain, Sunday, July 7, 2019. Revellers from around the world flock to Pamplona every year to take part in the eight days of the running of the bulls. (Photo by Alvaro Barrientos/AP Photo) 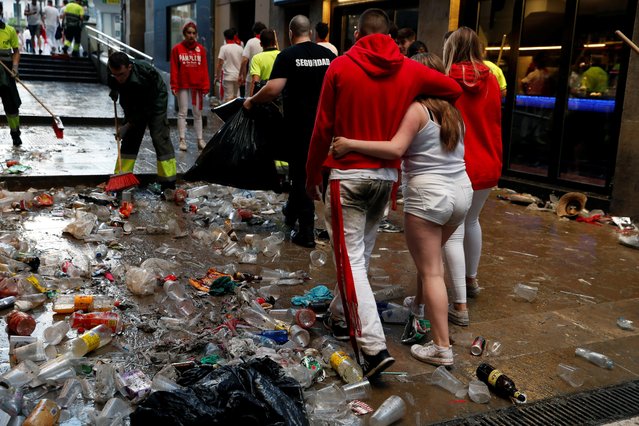 Revellers walks through trash before the second running of the bulls at the San Fermin festival in Pamplona, Spain, July 8, 2019. (Photo by Susana Vera/Reuters) 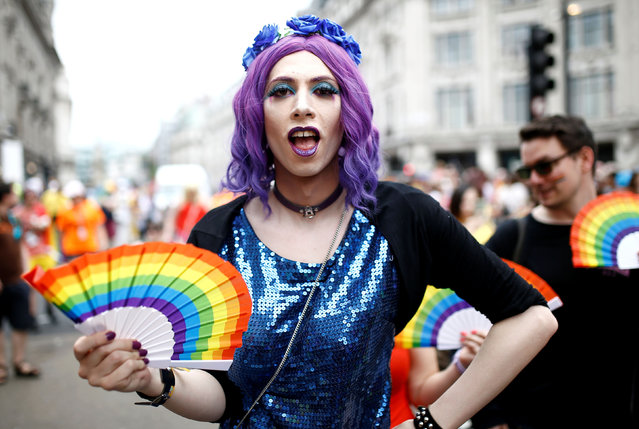 A participant takes part in the annual Pride in London parade, in London, Britain on July 6, 2019. (Photo by Henry Nicholls/Reuters) 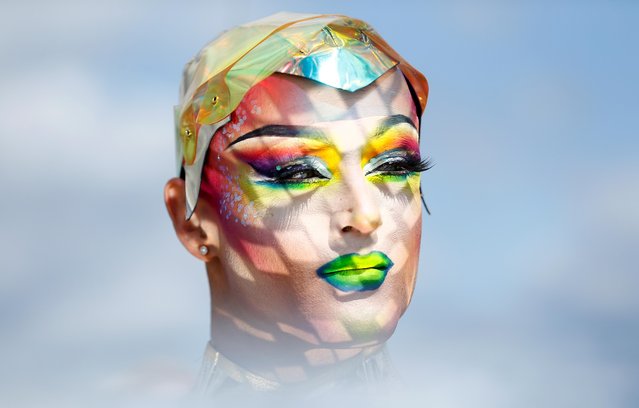 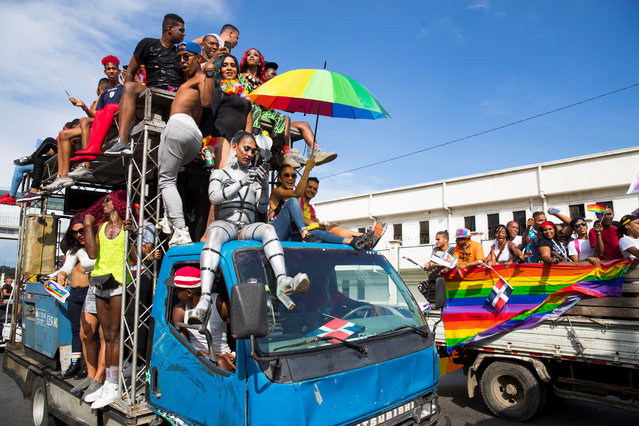 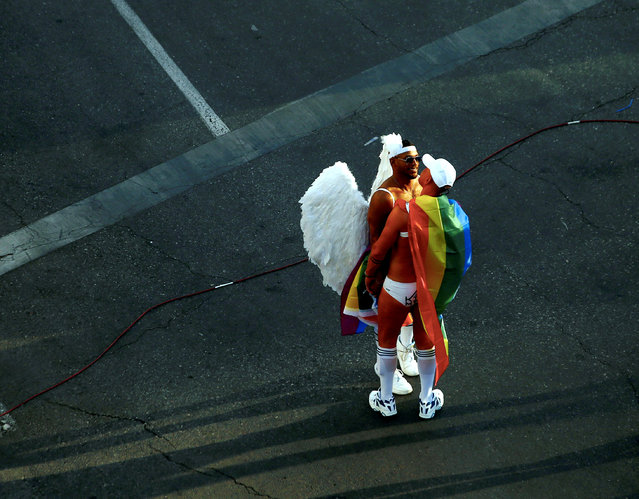 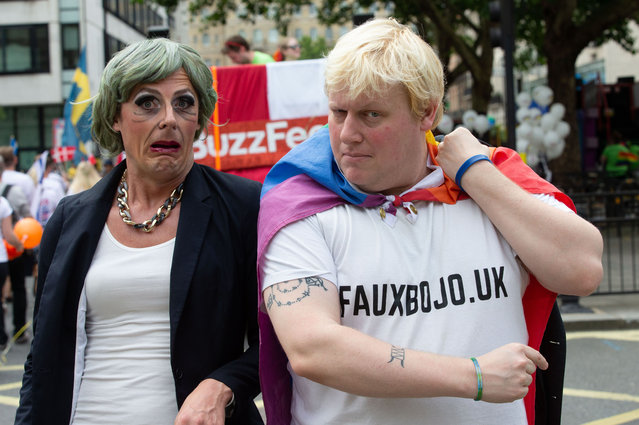 A fake Theresa May and Boris Johnson join Members of the Lesbian, Gay, Bisexual and Transgender community (LGBT) and their supporters, as they gather in central London, England for the annual Pride parade on July 6, 2019. (Photo by Mark Thomas/Rex Features/Shutterstock) 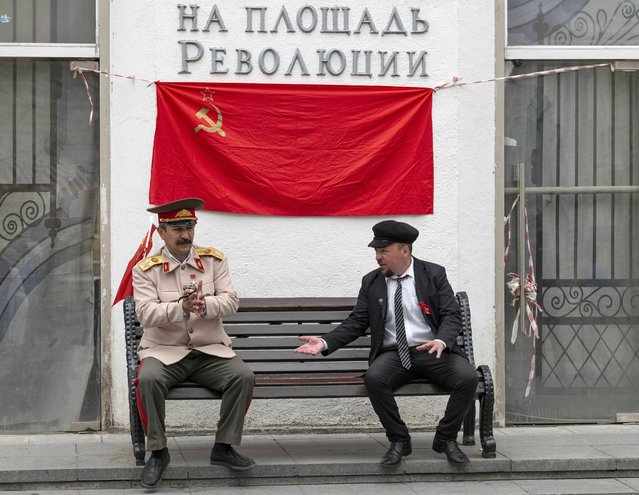 Two men who impersonate Soviet founder Vladimir Lenin, right, and Soviet leader Joseph Stalin talk to each other waiting to pose with tourists in Moscow, Russia, Saturday, July 6, 2019. The words on the background is the name of the underground Station and reading “Revolution Square”. (Photo by Alexander Zemlianichenko/AP Photo) 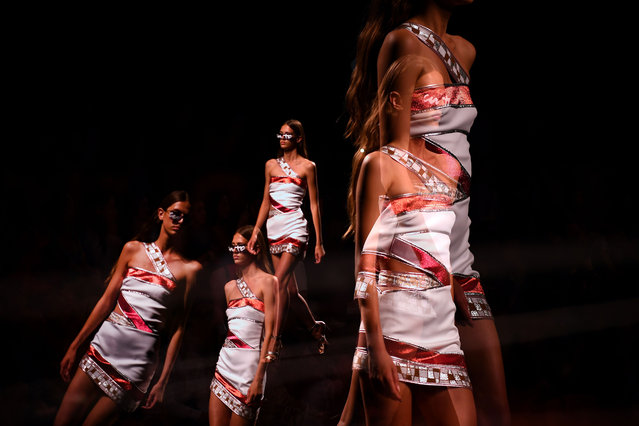 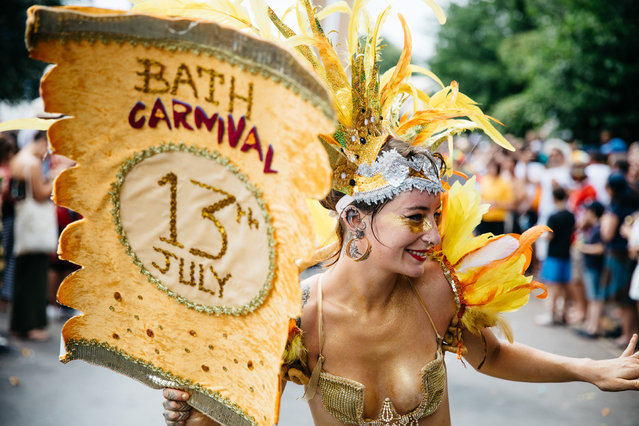 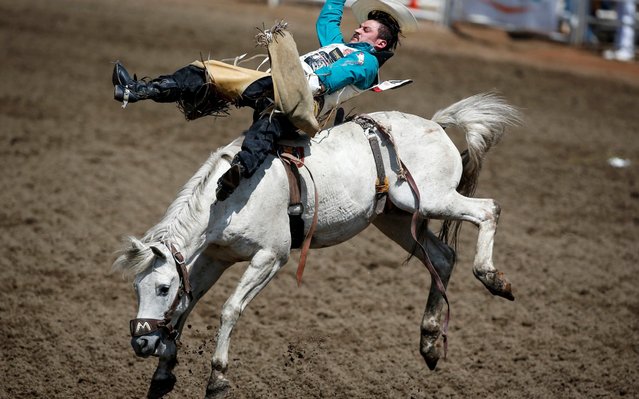 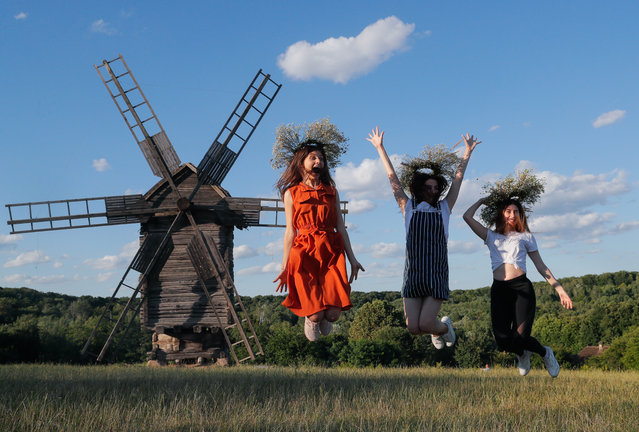 Ukrainian girls wearing flower's diadems jump in front of an old windmill in Kiev, Ukraine, 06 July 2019, as she celebrates the traditional pagan holiday of Ivana Kupala. Ivana Kupala is celebrated, during the summer solstice, on the shortest night of the year, marking the beginning of summer and is celebrated in Ukraine, Belarus, Poland and Russia. People sing and dance around bonfires, play games and perform traditional rituals. Young people jump over bonfires in order to test their bravery. Couples holding hands jump over the flames to test their love. If the couple does not succeed it is predicted to split up. Traditionally, children and young unmarried women wear wreaths of wild flowers on their heads to symbolize purity. (Photo by Sergey Dolzhenko/EPA/EFE)
Edit Del
10 Jul 2019 00:05:00, post received 0 comments
Publication archive:
←   →
Popular tags:
All tags
Last searches: