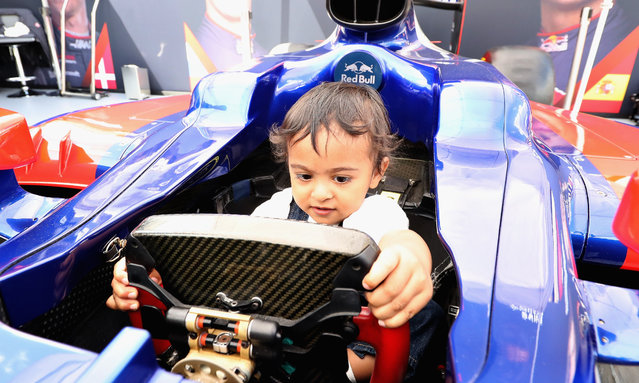 A young fan sits in the Scuderia Toro Rosso car during F1 Live London at Trafalgar Square on July 12, 2017 in London, England. F1 Live London, the first time in Formula 1 history that all 10 teams come together outside of a race weekend to put on a show for the public in the heart of London. (Photo by Mark Thompson/Getty Images for Formula 1) 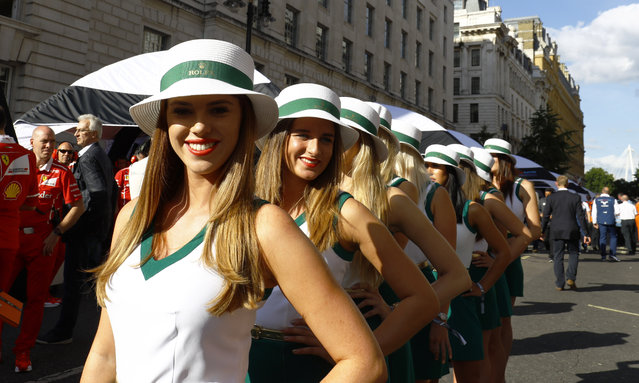 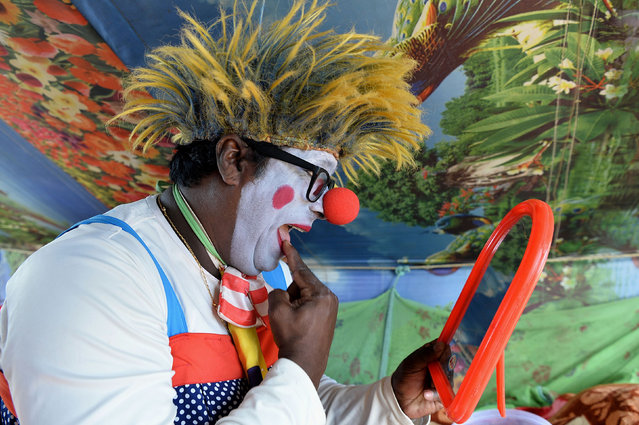 In this photo taken on July 11, 2017, Indian peformer Biju Nair, 45, gets ready in his clown costume before the Rambo Circus show in Bangalore. The 26- year- old Rambo Circus is among the very few surviving circus companies in India, touring the country and giving performances with its 160- strong troupe including 90 performing artists. (Photo by Manjunath Kiran/AFP Photo) 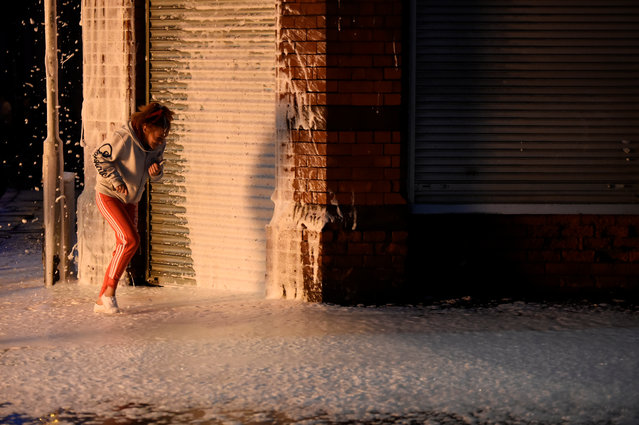 A woman runs through foam sprayed by firefighters to tackle a bonfire in East Belfast ahead of the Twelfth of July celebrations held by members of Loyalist Orders in Belfast, Northern Ireland July 11, 2017. (Photo by Clodagh Kilcoyne/Reuters) 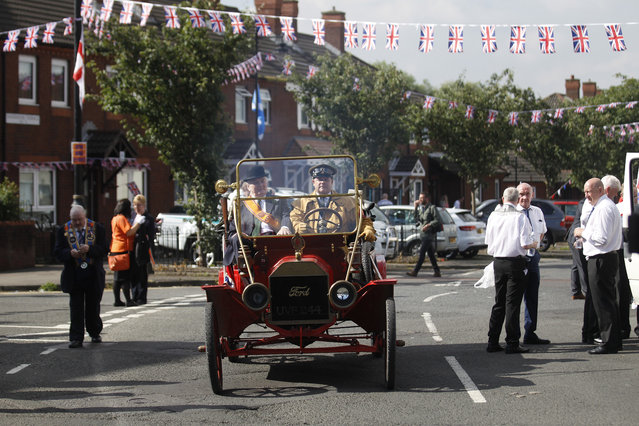 An old Ford car waits to lead the Orange order parader in North Belfast, Northern Ireland, Wednesday, July 12, 2017. Thousands of Orangemen and their supporters took to the streets to march for the Protestant commemoration of the 1690 Battle of the Boyne. (Photo by Peter Morrison/AP Photo) 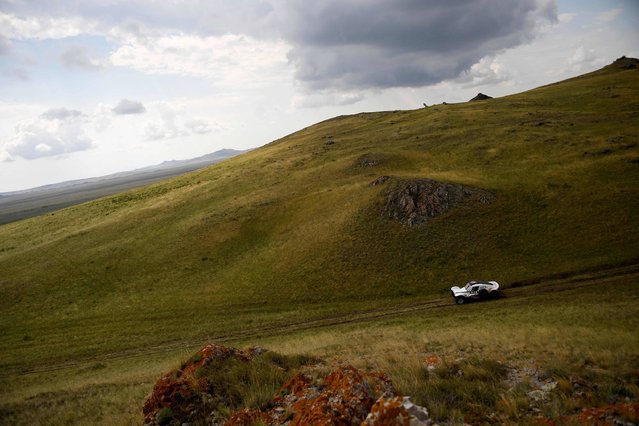 Remy Vauthier and co-driver Jean Brucy of France compete during the Stage 4 of the Silk Way 2017 between Astana and Semey, Kazakhstan, on July 12, 2017. Silk Way Rally 2017 goes through Russia, Kazakhstan and China from July 7 to 22. (Photo by Franck Fife/AFP Photo) 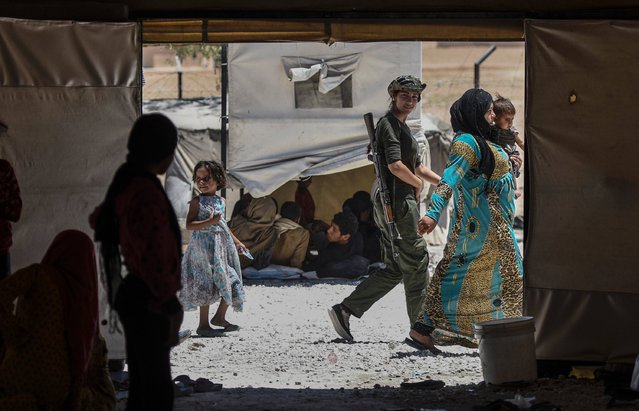 A female fighter from the Kurdish Women's Protection Units (YPJ) walks between displaced Syrians who fled the countryside surrounding the Islamic State (IS) group's Syrian stronghold of Raqa, at a temporary camp in the village of Ain Issa on July 11, 2017. (Photo by Bulent Kilic/AFP Photo) 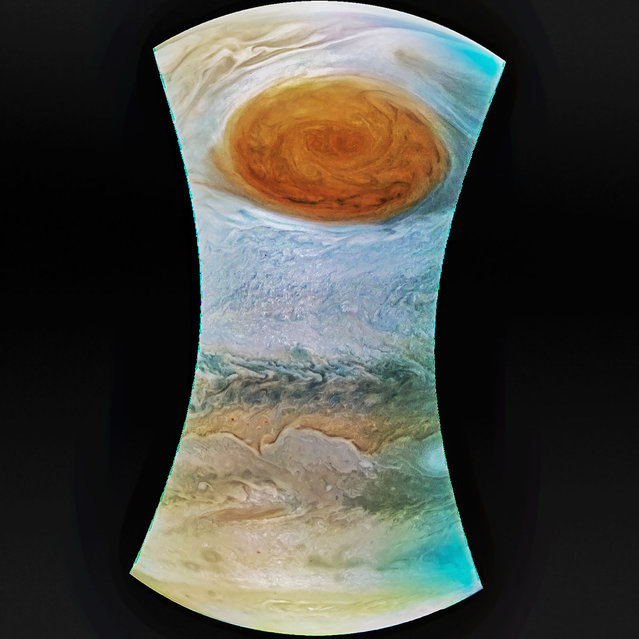 This processed NASA handout image obtained July 12, 2017 shows the Great Red Spot on Jupiter taken by the Juno Spacecraft on its flyby over the storm on July 11 NASA' s Juno successfully peered into the giant storm raging on Jupiter. “My latest Jupiter flyby is complete!” said a post on the @NASAJuno Twitter account. “All science instruments and JunoCam were operating to collect data”. The unmanned spacecraft came closer than any before it to the iconic feature on the solar system' s largest planet. (Photo by AFP Photo/NASA) 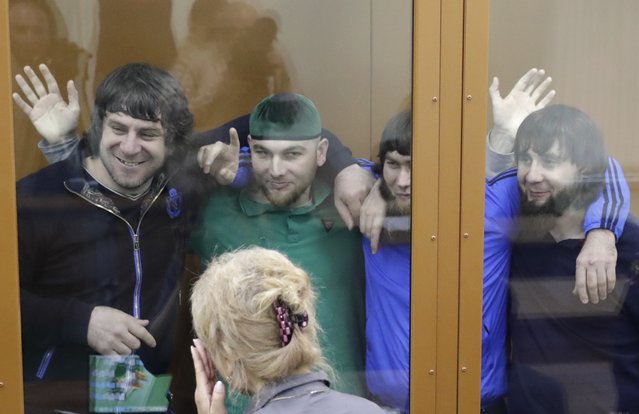 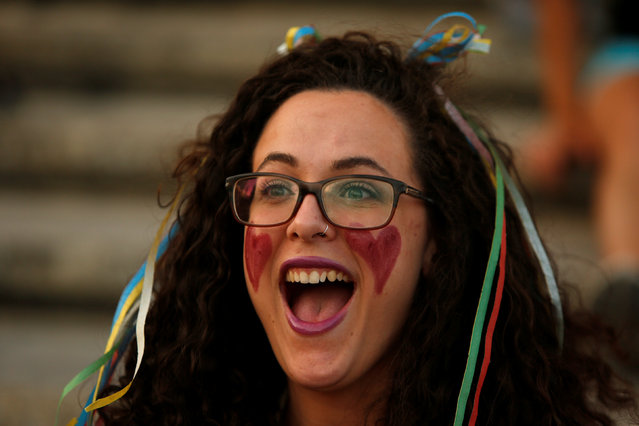 A woman reacts during celebration after the Maltese parliament voted to legalise same-s*x marriage on the Roman Catholic Mediterranean island, in Valletta, Malta, July 12, 2017. (Photo by Darrin Zammit Lupi/Reuters) 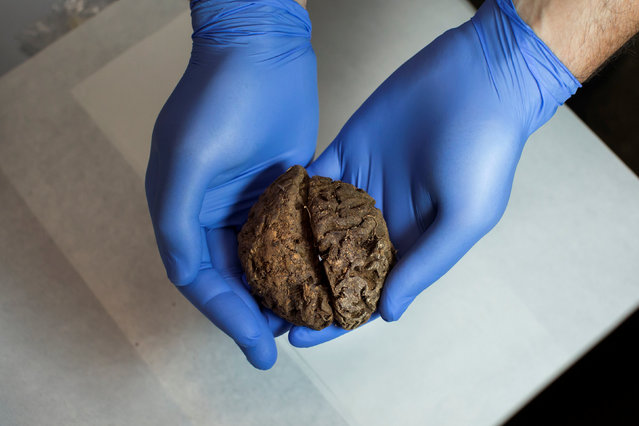 Fernando Serrulla, a forensic anthropologist of the Aranzadi Science Society, shows one of the 45 brains saponified of those killed by forces of the dictator Francisco Franco which were found in 2010 in a mass grave around the area known as La Pedraja, at a laboratory in Verin, Spain, June 9, 2017. (Photo by Juan Medina/Reuters) 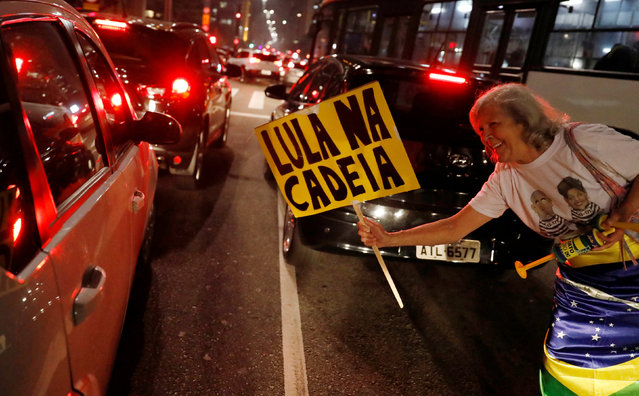 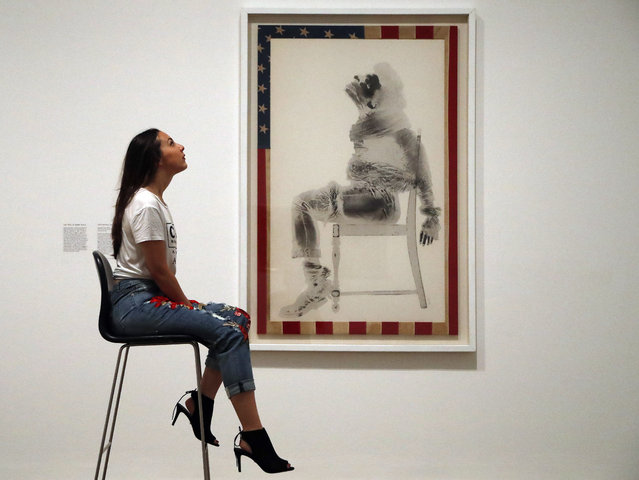 A woman poses as she beside David Hammons painting on an America flag “Injustice case” at the exhibition Soul Of A Nation, exploring the art made by African American artists between 1963 and 1983, in London, Tuesday, July 11, 2017. The exhibition starts on July 12, 2017 nd ends on Oct.22, 2017. (Photo by Frank Augstein/AP Photo) 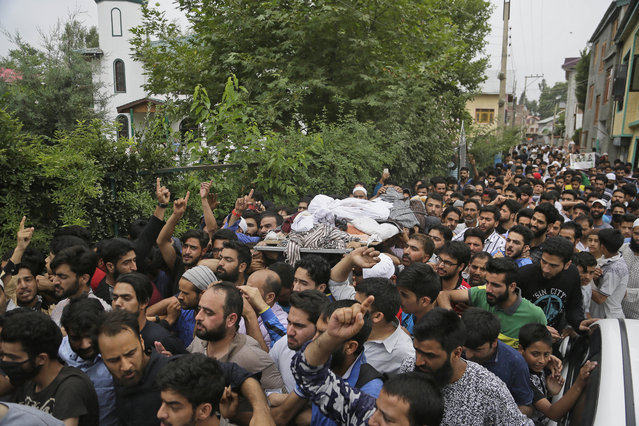 Kashmiri people carry the body of a local rebel Aqib Ahmad during his funeral procession in Srinagar, Indian controlled Kashmir, Wednesday, July 12, 2017. Anti-India protests and clashes erupted in the main city in Indian-controlled Kashmir after three men police identified as Kashmiri rebels were killed in a gunbattle with government forces. (Photo by Mukhtar Khan/AP Photo) 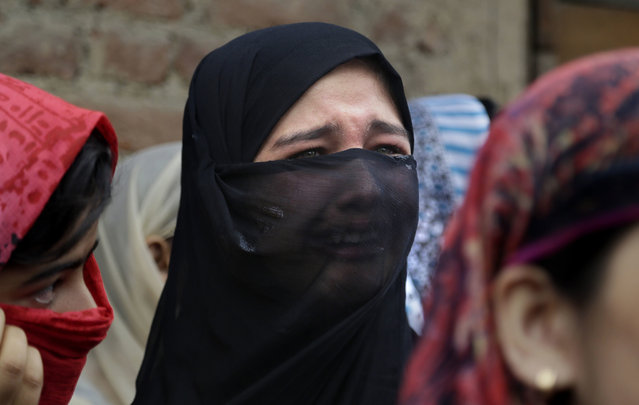 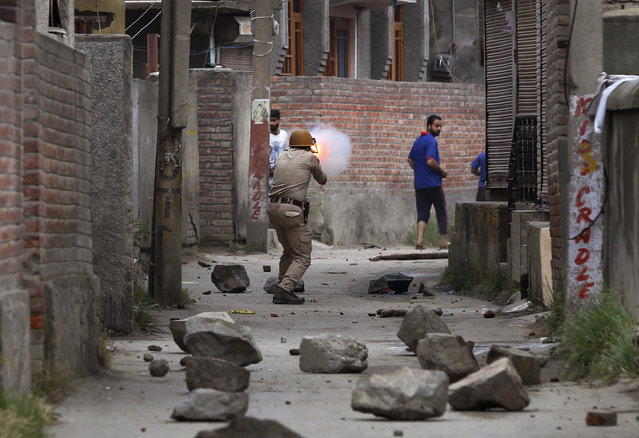 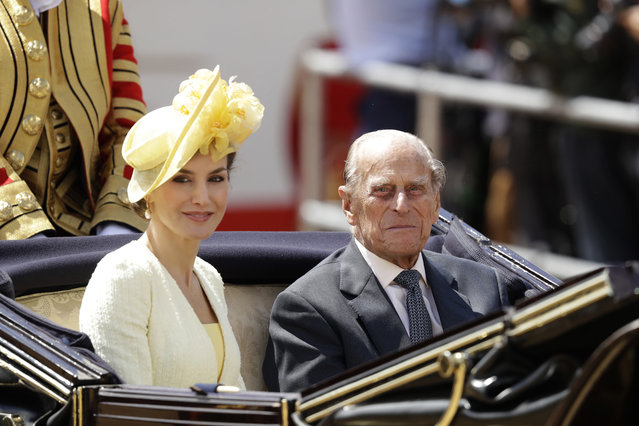 Spain's Queen Letizia and Britain's Prince Philip sit together in a carriage as they are taken to Buckingham Palace after a Ceremonial Welcome on Horse Guards Parade in London, Wednesday, July 12, 2017. (Photo by Matt Dunham/AP Photo) 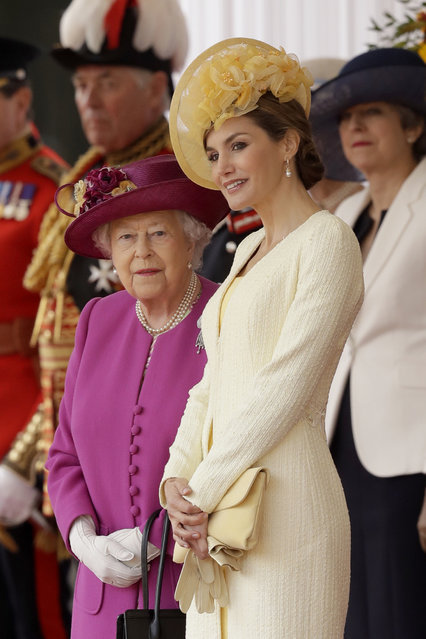 Britain's Queen Elizabeth II stands with Spain's Queen Letizia as their husbands King Felipe and Prince Philip inspect an honour guard during a Ceremonial Welcome on Horse Guards Parade in London, Wednesday, July 12, 2017. The King and Queen of Spain are on a three day State Visit to Britain. (Photo by Matt Dunham/AP Photo) 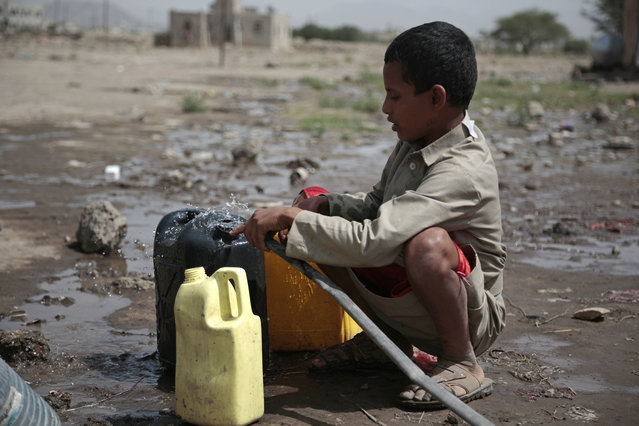 A boy fills a container with water from a well that is allegedly contaminated with cholera bacteria, on the outskirts of Sanaa, Yemen, Wednesday, July 12, 2017. The U.N. health agency said Tuesday that plans to ship cholera vaccine to Yemen are likely to be shelved over security, access and logistical challenges in the war-torn country. Yemen's suspected cholera caseload has surged past 313,000, causing over 1,700 deaths in the world's largest outbreak. (Photo by Hani Mohammed/AP Photo) 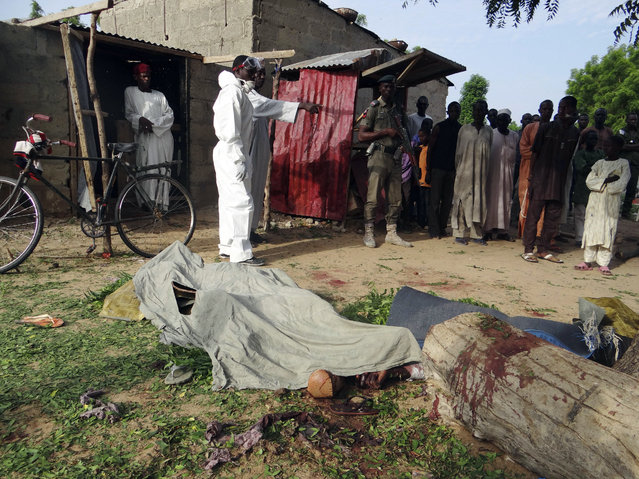 People mourn over the bodies of suicide bomb attack victims in a village near Maiduguri, Nigeria, Wednesday, July 12, 2017. Four Boko Haram suicide bombers killed over a dozen people in a series of attacks that targeted a civilian self-defense force and the people who gathered to mourn their deaths, police in Nigeria said Wednesday. It was the deadliest attack in months in the northeastern city of Maiduguri, the birthplace of Boko Haram's eight-year insurgency. (Photo by Jossy Ola/AP Photo) 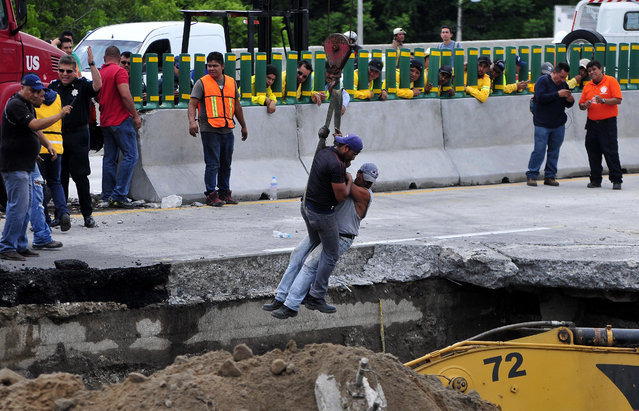 Workers are lowered by a crane as they work to rescue a vehicle that drove into a sinkhole that opened up on a highway in Cuernavaca, Mexico, Wednesday, July 12, 2017. A father and son were killed when the deep sinkhole swallowed their car on Wednesday morning. Civil protection rescuers reached the rubble-covered Volkswagen Jetta lying on its roof at the bottom of the hole in the afternoon, after working for more than eight hours on the closed section of road. (Photo by Tony Rivera/AP Photo)
Edit Del
13 Jul 2017 08:04:00, post received 0 comments
Publication archive:
←   →
Popular tags:
All tags
Last searches: