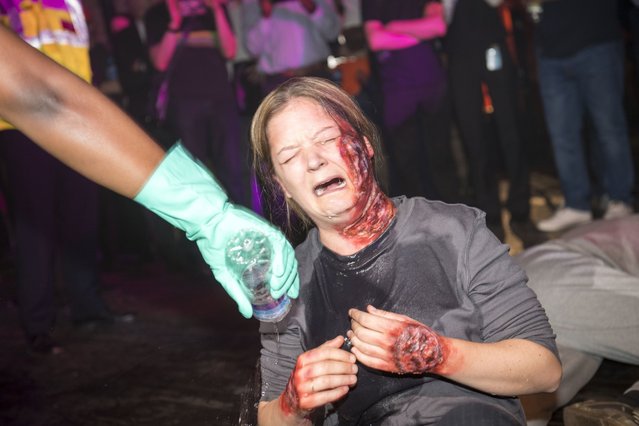 Emergency services staged a simulated acid attack inside a Heaven Nightclub in London, England on July 18, 2018, to prepare for if it really happened. Photo shows how “victims” were doused with water by staff to wash off the corrosive substance. During the simulation,a man in a balaclava sprayed a bottle of acid, injuring ten people. (Photo by i-Images Picture Agency) 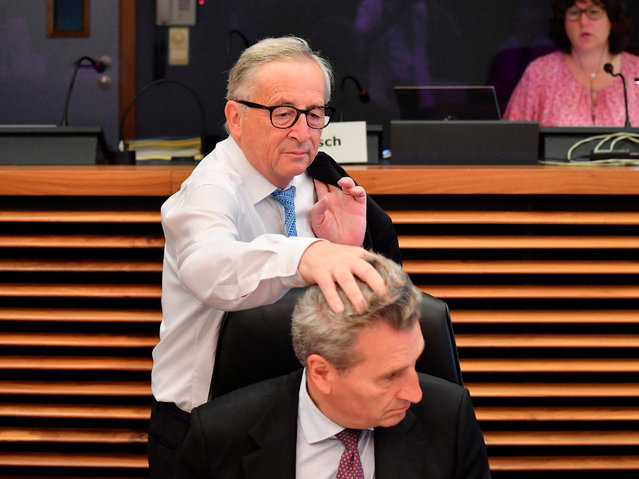 President of Commission Jean- Claude Juncker (up) ruffles the hair of EU Commissioner of Digital Economy and Society Gunther Oettinger before the College Commissioners meeting at the EU headquarters in Brussels on July 18, 2018. (Photo by John Thys/AFP Photo) 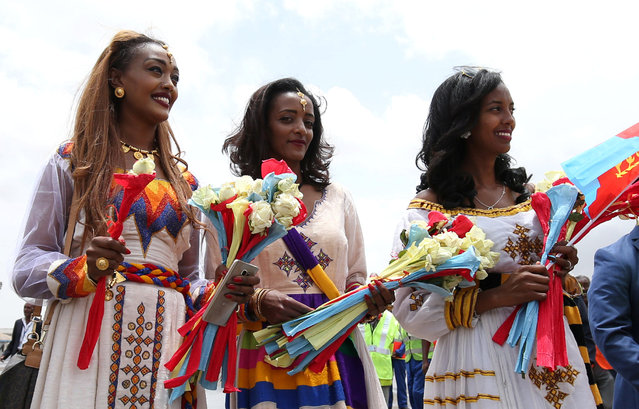 Eritreans wait to welcome their families at Asmara International Airport aboard the Ethiopian Airlines ET314 flight in Asmara, Eritrea on July 18, 2018. Ethiopia and Eritrea on July 18, 2018, resumed commercial airline flights for the first time in two decades, with emotions spilling over into the aisles and onto the tarmac as families were reunited. (Photo by Tiksa Negeri/Reuters) 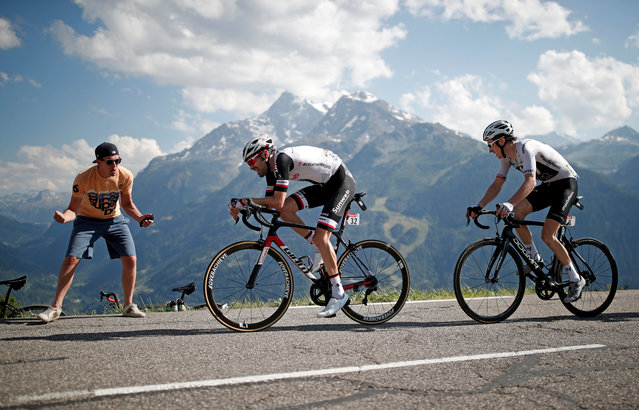 Team Sunweb rider Tom Dumoulin of the Netherlands and Team Sky rider Geraint Thomas of Britain in action on the final climb during stage 11 on July 18, 2018. (Photo by Benoit Tessier/Reuters) 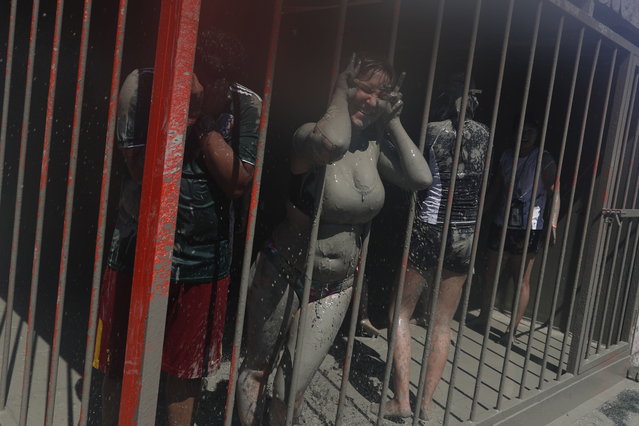 Festival-goers stand in a barred area during the 21st Boryeong Mud Festival on Daecheon beach in Boryeong City, South Korea, 14 July 2018. The festival runs from 13 July to 22 July, with tourists flocking to the area to experience the alleged beneficial properties of the Boryeong mud, as well as for a variety of entertainment events. (Photo by Jeon Heon-Kyun/EPA/EFE) 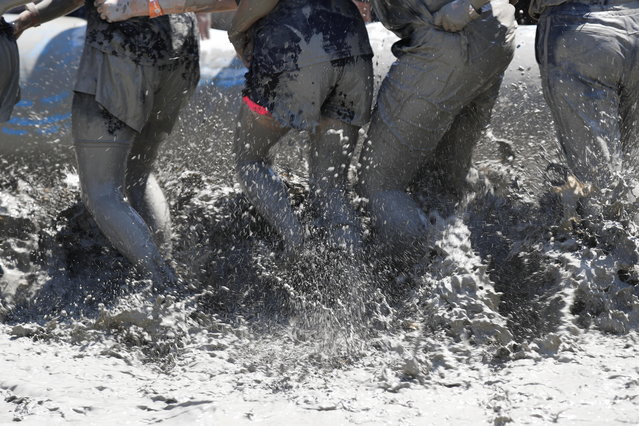 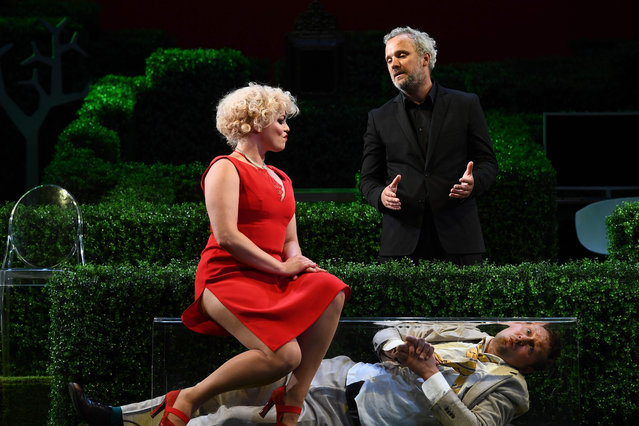 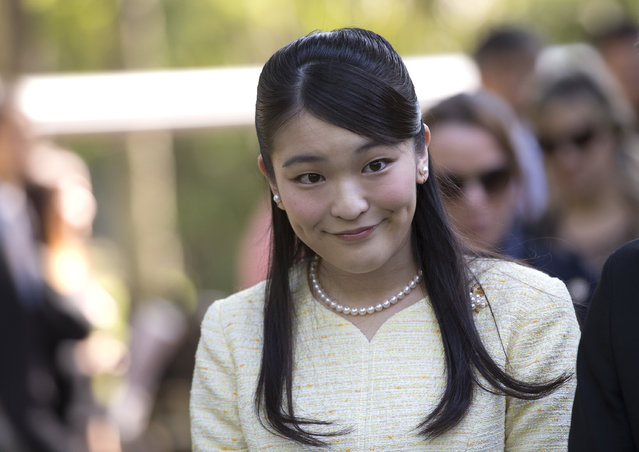 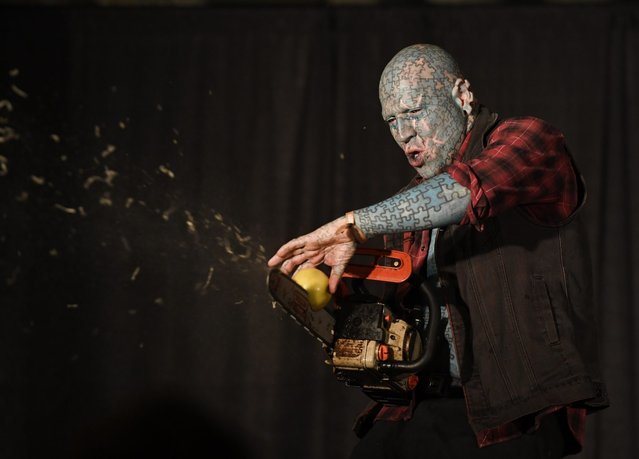 The Enigma sprays the crowd with shredded apple coming from a chainsaw in the Freak Show tent at the Denver County Fair on the National Western Stock Show grounds July 14, 2018. (Photo by Andy Cross/The Denver Post) 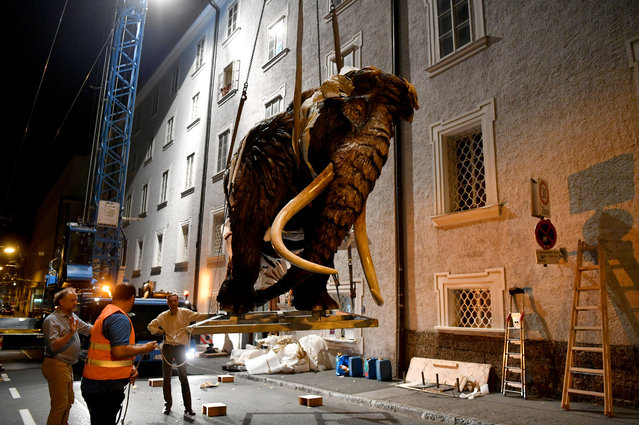 A life-sized wooden mammoth is lifted by a crane to be transported inside the courtyard of the museum “House of Nature” ahead of an exhibition called “Ice Age and Climate” on early July 18, 2018 in Salzburg, Austria. (Photo by Barbara Gindl/AFP Photo/APA) 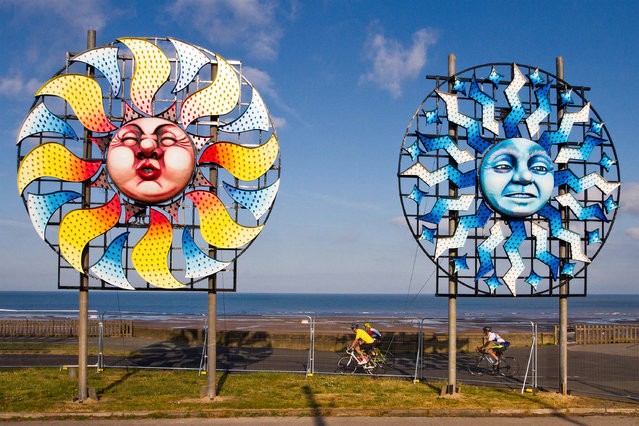 Sunny start to the day at the coast as Sun burst installations, part of the Illuminations spectacular appear on the section of the promenade as local residents, cyclists and tourists enjoy the early morning sun in Blackpool, Lancashire, UK on July 15, 2018. Blackpool Illuminations is an annual lights festival, founded in 1879 and held each autumn in the British seaside resort of Blackpool on the Fylde Coast. (Photo by Media World Images/Alamy Live News) 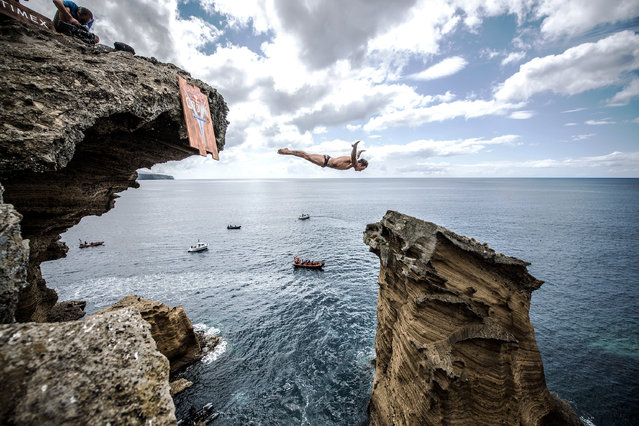 In this handout image provided by Red Bull, Alessandro De Rose of Italy dives from a 25 metre cliff at the Snakehead on Islet Vila Franco do Campo during the first training session of the third stop of the Red Bull Cliff Diving World Series on July 12, 2018 at Sao Miguel, Azores, Portugal. (Photo by Romina Amato/Red Bull via Getty Images) 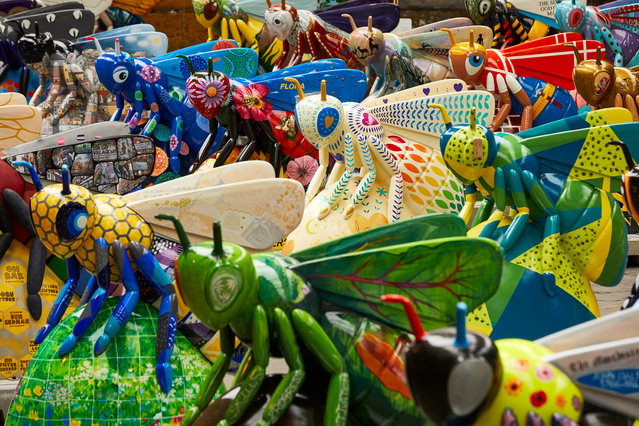 Bee in the city, a display of more than 100 giant bee sculptures, is being installed in locations across Manchester, England on July 18, 2018, to create an arts trail. Each bee has been individually designed and decorated to reflect the city, its industrial heritage and music scene. (Photo by Christopher Thomond/The Guardian) 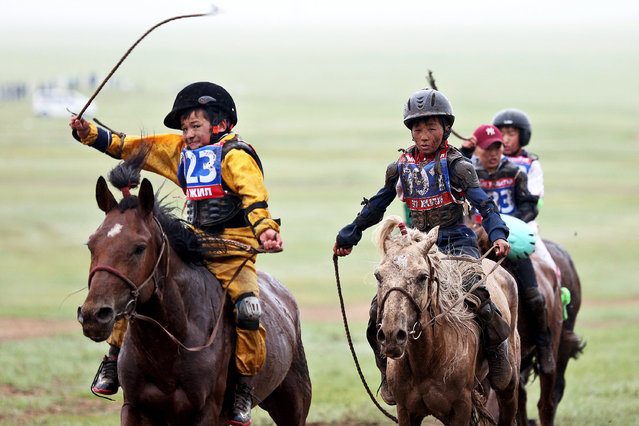 Child jockeys riding horses arrive to the finish line during a horse race at the Mongolian traditional Naadam festival, on the outskirts of Ulaanbaatar, Mongolia July 11, 2018. (Photo by Rentsendorj Bazarsukh/Reuters) 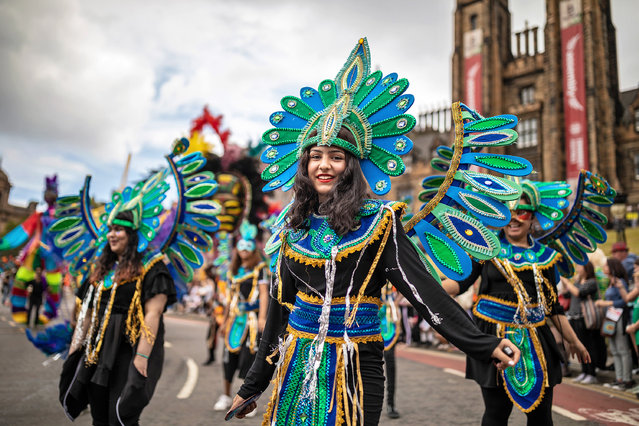 Performers take part in the Edinburgh Jazz and Blues Carnival parade, which marks the start of the city's festival season in Edinburgh, Scotland on July 15, 2018. (Photo by James Glossop/The Times) 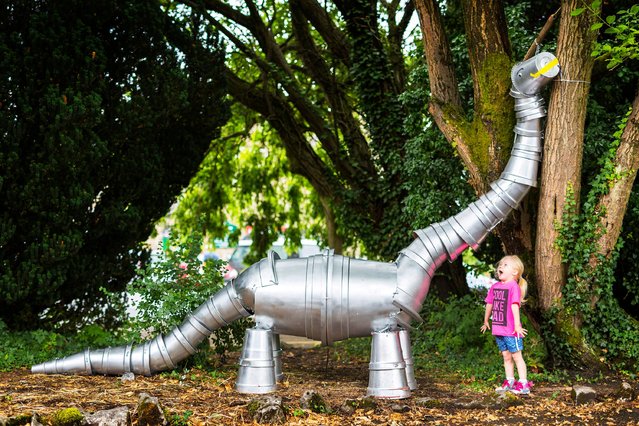 A dinosaur made entirely of flowerpots is part of the annual flowerpot festival held every July and August in the Yorkshire market town of Settle, England on July 18, 2018. (Photo by Andrew McCaren/LNP) 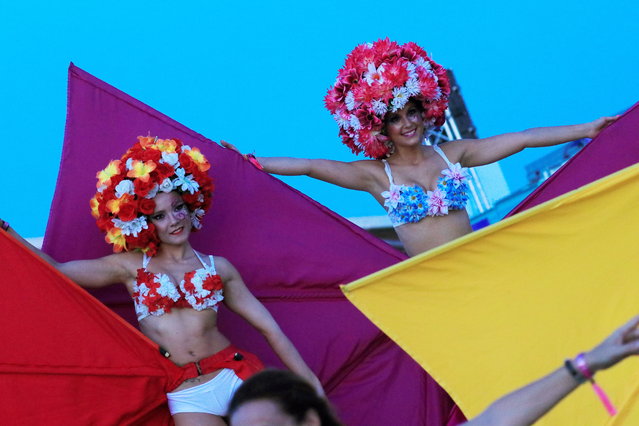 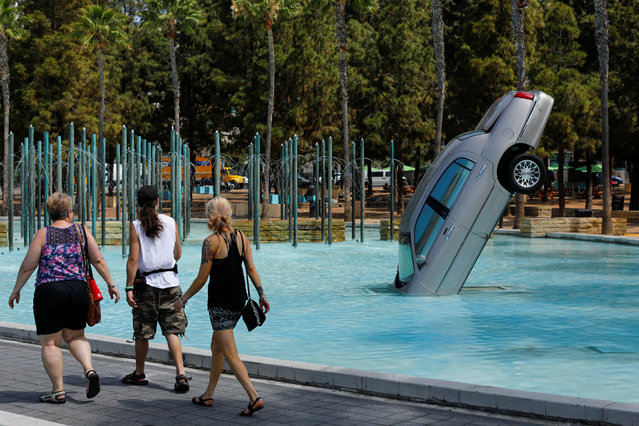