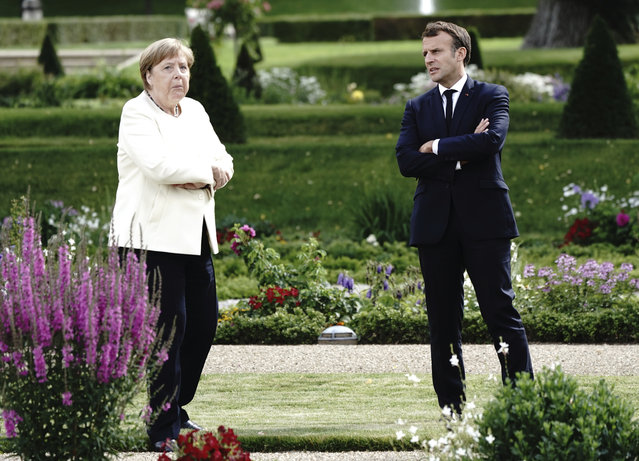 French President Emmanuel Macron talks to German Chancellor Angela Merkel during a meeting at Meseberg Castle, the German government's guest house in Meseberg, Germany, June 29, 2020. One of the topics of the meeting is the European reconstruction plan of 750 billion euros in the Corona crisis. (Photo by Kay Nietfeld/dpa via AP Photo) 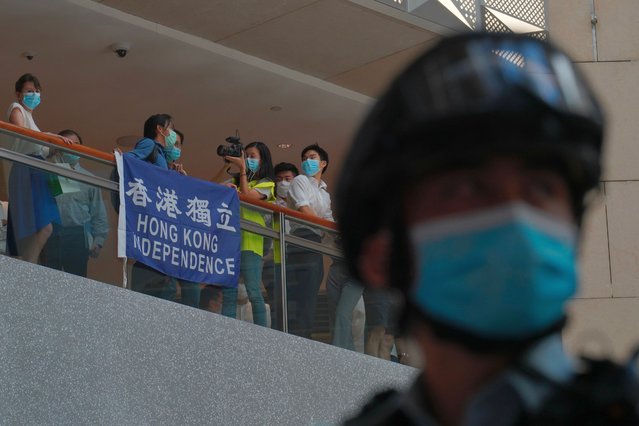 A police officer stands guard as protesters gather at a shopping mall in Central during a pro-democracy protest against Beijing's national security law in Hong Kong, Tuesday, June 30, 2020. Hong Kong media are reporting that China has approved a contentious law that would allow authorities to crack down on subversive and secessionist activity in Hong Kong, sparking fears that it would be used to curb opposition voices in the semi-autonomous territory. (Photo by Vincent Yu/AP Photo) 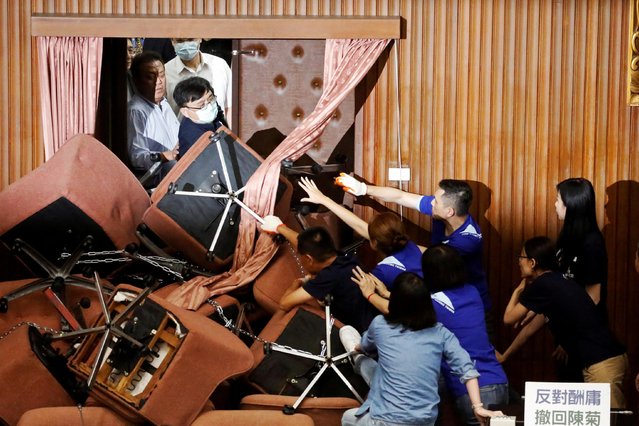 Lawmakers from Taiwan's ruling Democratic Progressive Party (DPP) scuffle with lawmakers from the main opposition Kuomintang (KMT) party, who have been occupying the Legislature Yuan, in Taipei, Taiwan, June 29, 2020. (Photo by Ann Wang/Reuters) 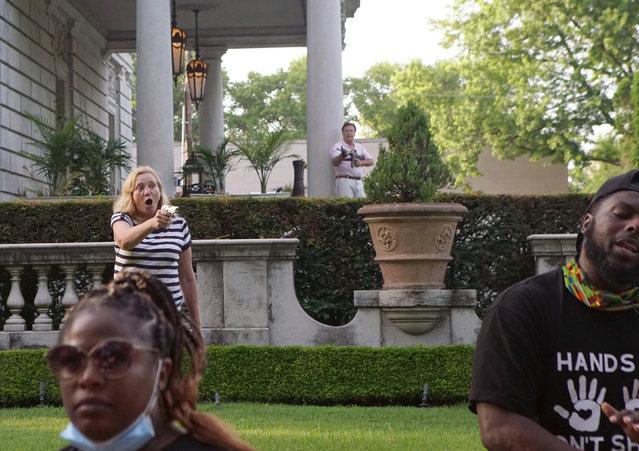 A man and woman draw their firearms on protestors as they enter their neighborhood during a protest against St. Louis Mayor Lyda Krewson, in St. Louis, Missouri, U.S. June 28, 2020. (Photo by Lawrence Bryant/Reuters) 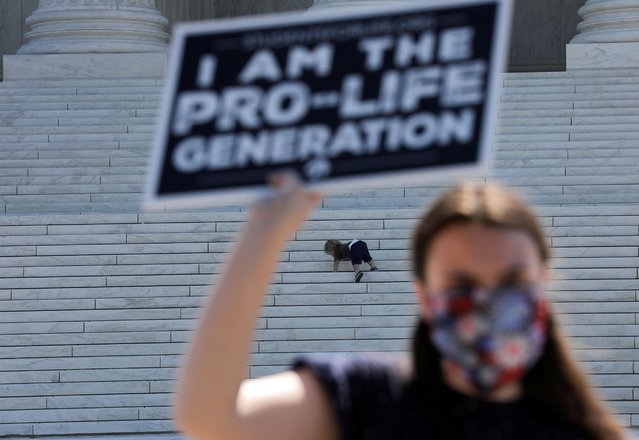 A child plays on the steps of the U.S. Supreme Court building as an anti-abortion activist holds a sign during a demonstration outside the court in Washington, U.S., June 29, 2020. The child was being photographed by a parent (not shown) at the same time demonstrators gathered outside the court. (Photo by Carlos Barria/Reuters) 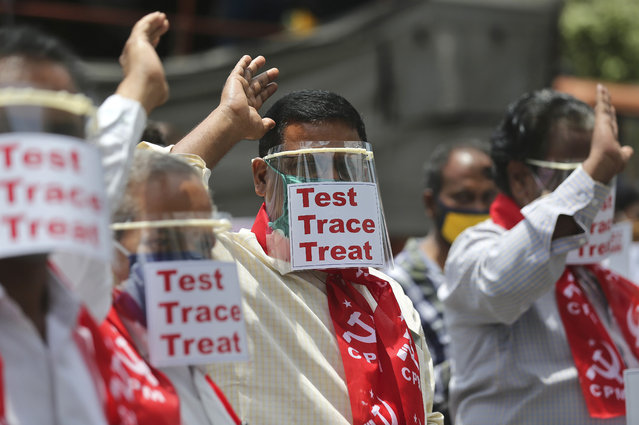 Activists of Communist Party of India Marxist display placards on face shields and shout slogans during a protest asking the state government to increase testing and free treatment for all COVID-19 patients in Hyderabad, India, Monday, June 29, 2020. Governments are stepping up testing and warily considering their next moves as the number of newly confirmed coronavirus cases surges in many countries. India reported more than 20,000 new infections on Monday. (Photo by Mahesh Kumar A./AP Photo) 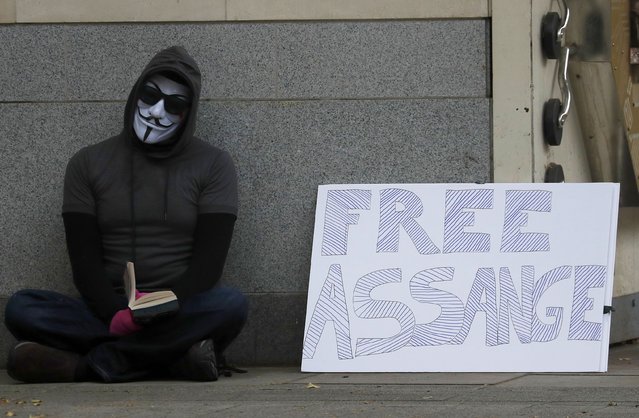 A supporter of WikiLeaks founder Julian Assange protests in front of Westminster Magistrates' Court in London, Monday, June 29, 2020, where he is expected to appear in custody for the extradition case management hearing. Assange was arrested last year after being evicted from the Ecuadorian Embassy in London, where he had sought refuge to avoid being sent to Sweden over allegations of rape and sexual assault, and is at the center of an extradition tussle over whether he should be sent to the United States. (Photo by Frank Augstein/AP Photo) 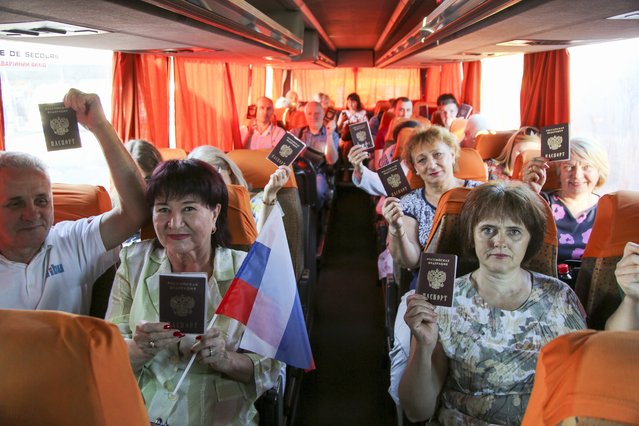 In this photo taken on Saturday, June 27, 2020, people show their Russian passports sitting on a bus to Russia at a bus to Russia at a bus stop in Donetsk, eastern Ukraine. Residents of separatist-controlled regions in eastern Ukraine who have Russian citizenship are traveling to Russia to vote on constitutional amendments that would allow President Vladimir Putin to remain in power until 2036. Authorities of the self-proclaimed Luhansk and Donetsk People's Republics have organized bus services to polling stations in the neighboring Rostov region in Russia, in what is seen by many as part of the wide-spread effort to boost turnout at the controversial plebiscite. (Photo by Alexei Alexandrov/AP Photo) 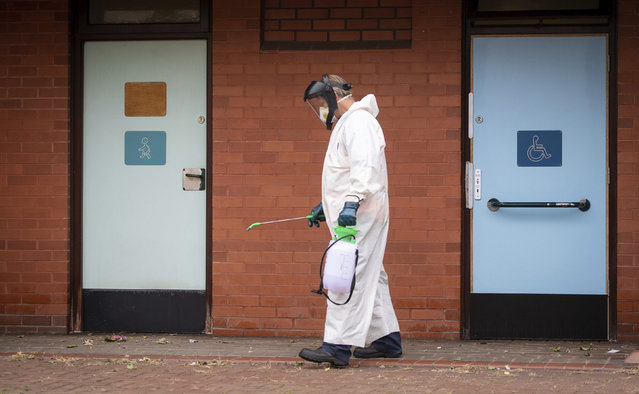 A worker for Leicester City Council disinfects public toilets in Leicester, England, Monday June 29, 2020. The central England city of Leicester is waiting to find out if lockdown restrictions will be extended as a result of a spike in coronavirus infections. (Photo by Joe Giddens/PA Wire via AP Photo) 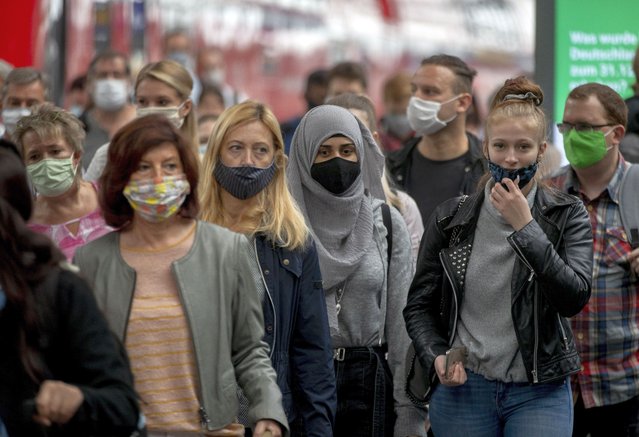 An Indian boy cleans the entrance area of a temple during the reimposed lockdown in Gauhati, India, Monday, June 29, 2020. India has reported a new daily record of nearly 20,000 new infections as several Indian states reimpose partial or full lockdowns to stem the spread of the coronavirus. (Photo by Anupam Nath/AP Photo) 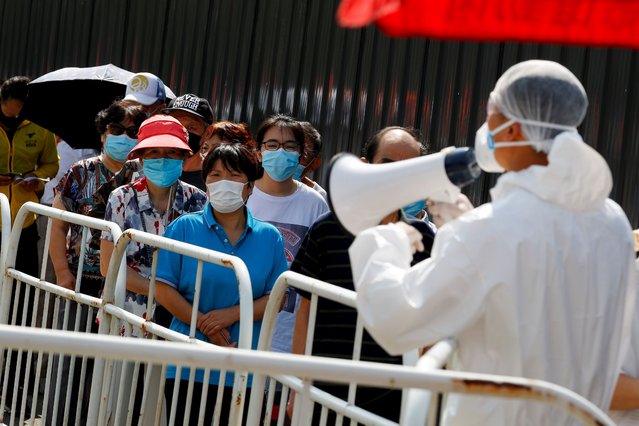 People line up to receive nucleic acid tests at a temporary testing site after a new outbreak of the coronavirus disease (COVID-19) in Beijing, China on June 30, 2020. (Photo by Thomas Peter/Reuters) 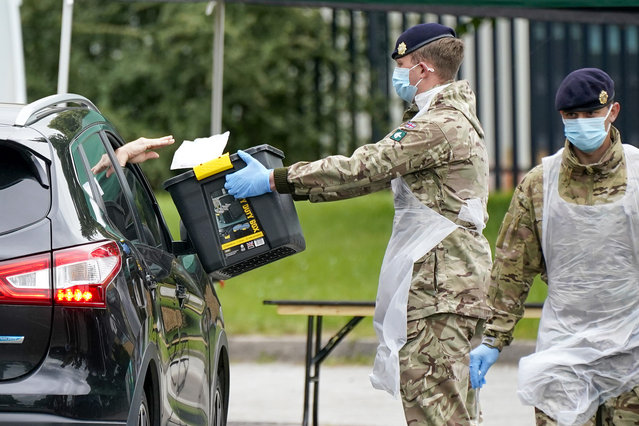 Soldiers from the Royal Logistics Corp operate a mobile coronavirus (Covid-19) testing site at Evington Leisure Centre on June 29, 2020 in Leicester, England. In a television appearance on Sunday, British Home Secretary Priti Patel confirmed the government was considering a local lockdown after a spike in coronavirus cases in the city. The city's mayor has said that Pubs and restaurants in Leicester may stay closed for two more weeks due to a recent surge in coronavirus cases. (Photo by Christopher Furlong/Getty Images) 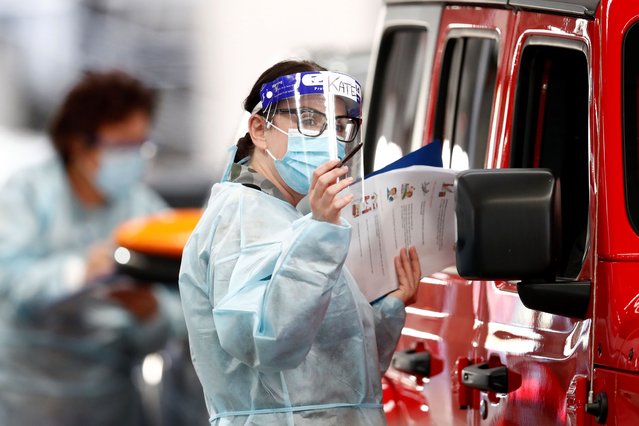 A member of the ADF (Australian Defence Force) administers a COVID-19 test at Melbourne Showgrounds on June 29, 2020 in Melbourne, Australia. Victoria has recorded 75 new coronavirus cases overnight, the state's fourth-highest single day rise since the start of the pandemic, while increased testing in Melbourne suburbs that have been identified as community transmission hotspots for coronavirus continues. Restrictions in Victoria have been tightened in response to the spike in new cases across the state with premier Daniel Andrews extending the current state of emergency for at least four weeks to allow police the power to enforce social distancing rules. (Photo by Darrian Traynor/Getty Images) 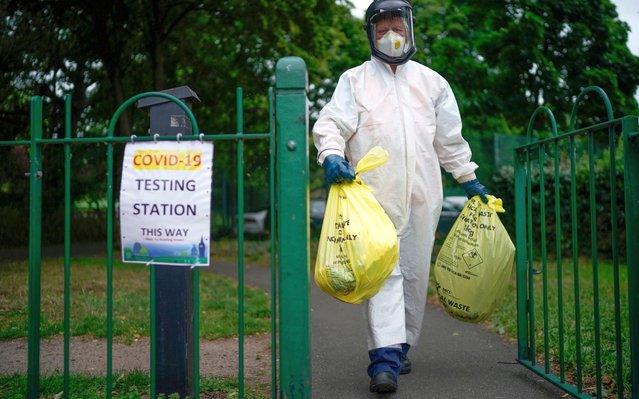 A city council worker carries rubbish from a coronavirus testing centre at Spinney Park which will be incinerated on June 29, 2020 in Leicester, England. In a television appearance on Sunday, British Home Secretary Priti Patel confirmed the government was considering a local lockdown after a spike in coronavirus cases in the city. The city's mayor has said that Pubs and restaurants in Leicester may stay closed for two more weeks due to a recent surge in coronavirus cases. (Photo by Christopher Furlong/Getty Images) 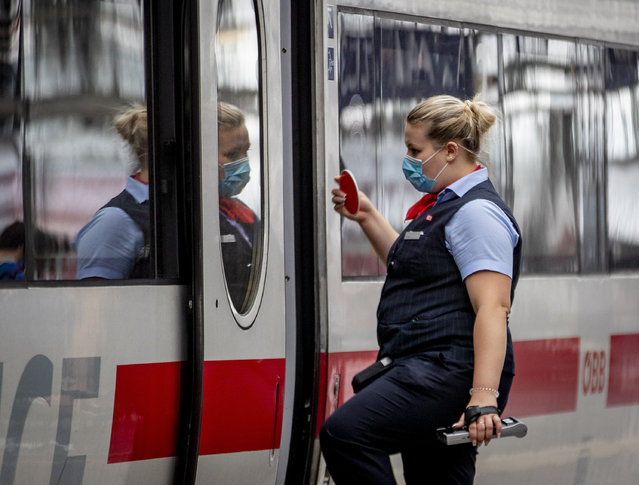 A conductor enters a train in the central train station in Frankfurt, Germany, Monday, June 29, 2020. (Photo by Michael Probst/AP Photo) 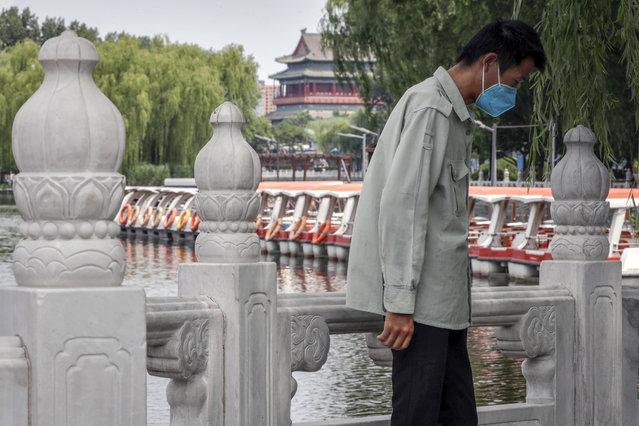 A man wearing a protective face mask to help curb the spread of the coronavirus stands against a roll of boats parked on the barricaded Houhai Lake, a usually popular tourist spot before the new coronavirus outbreak in Beijing, Tuesday, June 30, 2020. China, where the coronavirus pandemic began in December, was the first economy to reopen in March after the ruling Communist Party declared victory over the disease. Manufacturing and other activity is reviving but demand for exports is feeble and Chinese consumers, worried about losing jobs, are reluctant to spend. (Photo by Andy Wong/AP Photo) 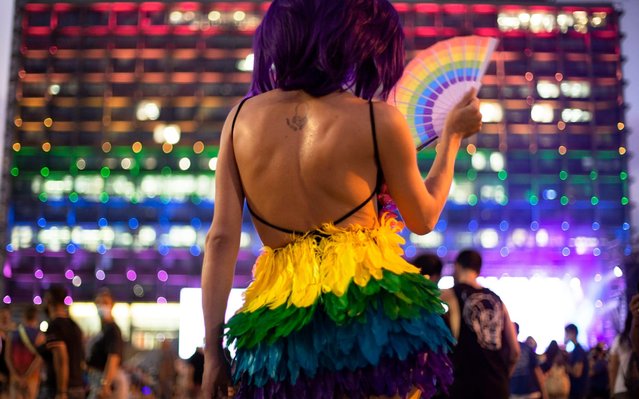 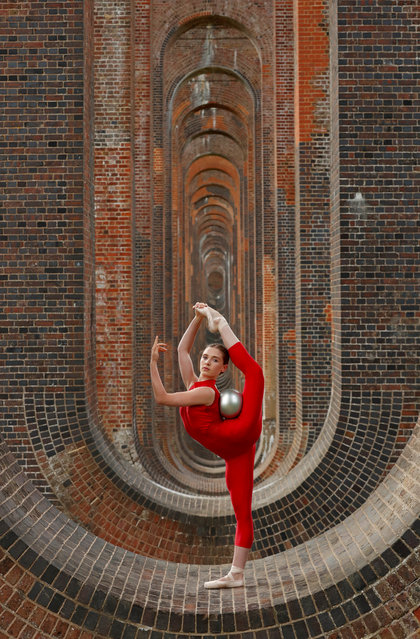 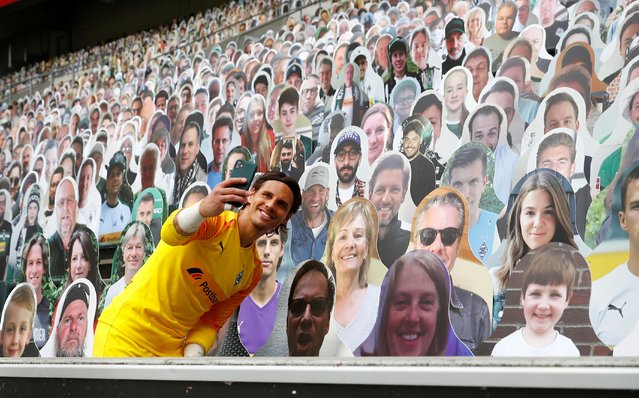 Borussia Moenchengladbach's Yann Sommer takes a selfie with the cardboard fans during their Bundesliga match in Moenchengladbach, Germany on June 27, 2020. (Photo by Wolfgang Rattay/Reuters) 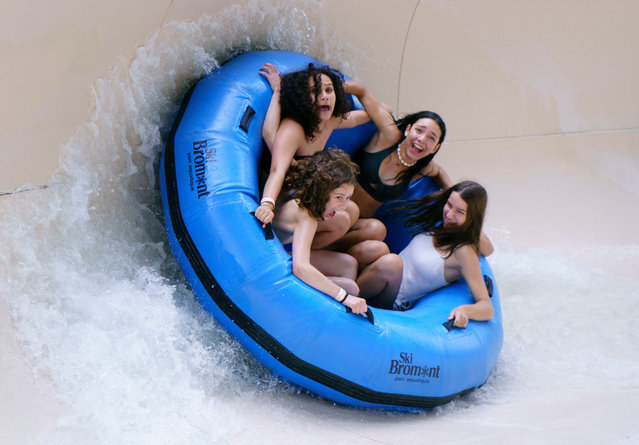