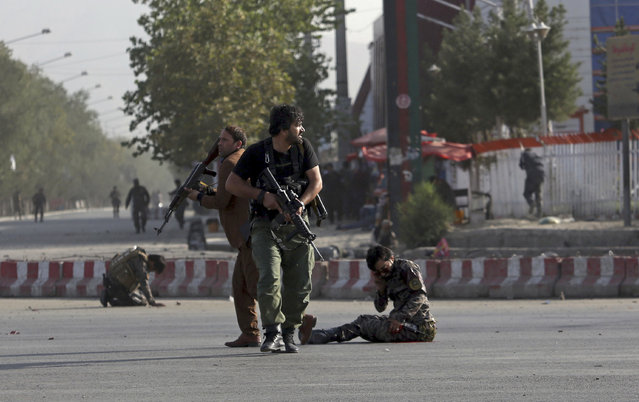 Afghan security personnel stand guard next to wounded comrades at the site of an attack near the Kabul International Airport, in Kabul, Afghanistan, Sunday, July 22, 2018. An Afghan spokesman said there has been a large explosion near the Kabul airport shortly after the country's controversial first vice president landed on his return from abroad. Gen. Abdul Rashid Dostum and members of his entourage were unharmed in the explosion on Sunday, which took place as his convoy had already left the airport. (Photo by Rahmat Gul/AP Photo) 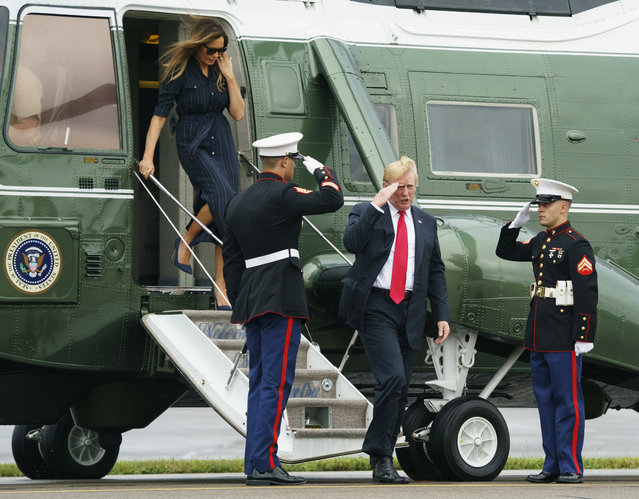 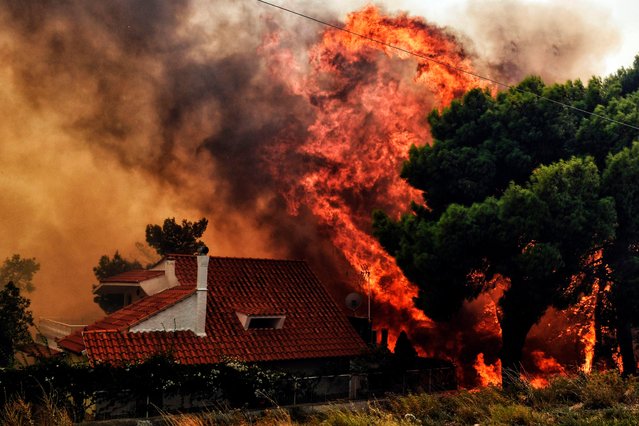 A house is threatened by a huge blaze during a wildfire in Kineta, near Athens, on July 23, 2018. More than 300 firefighters, five aircraft and two helicopters have been mobilised to tackle the “extremely difficult” situation due to strong gusts of wind, Athens fire chief Achille Tzouvaras said. (Photo by Valerie Gache/AFP Photo) 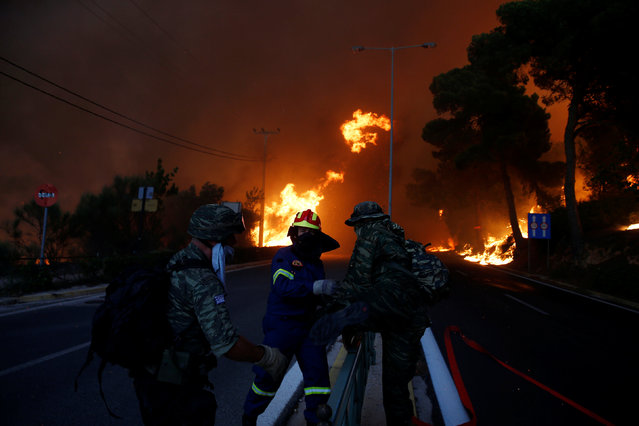 Firefighters and soldiers fall back as a wildfire burns in the town of Rafina, near Athens, Greece, July 23, 2018. (Photo by Costas Baltas/Reuters) 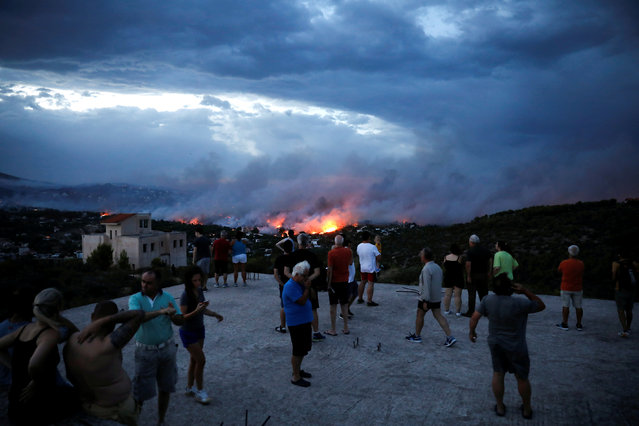 People watch a wildfire raging in the town of Rafina, near Athens, Greece, July 23, 2018. (Photo by Alkis Konstantinidis/Reuters) 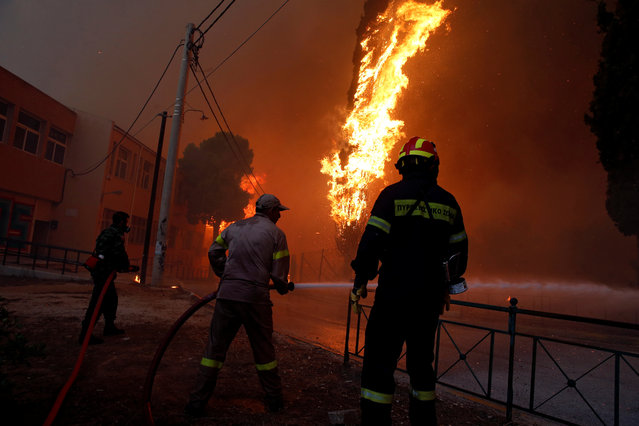 Firefighters and soldiers try to extinguish a wildfire burning in the town of Rafina, near Athens, Greece, July 23, 2018. (Photo by Costas Baltas/Reuters) 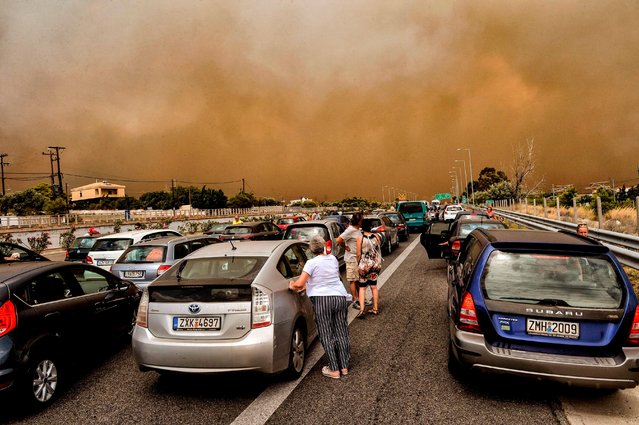 Cars are blocked at the closed National Road during a wildfire in Kineta, near Athens, on July 23, 2018. More than 300 firefighters, five aircraft and two helicopters have been mobilised to tackle the “extremely difficult” situation due to strong gusts of wind, Athens fire chief Achille Tzouvaras said. (Photo by Valerie Gache/AFP Photo) 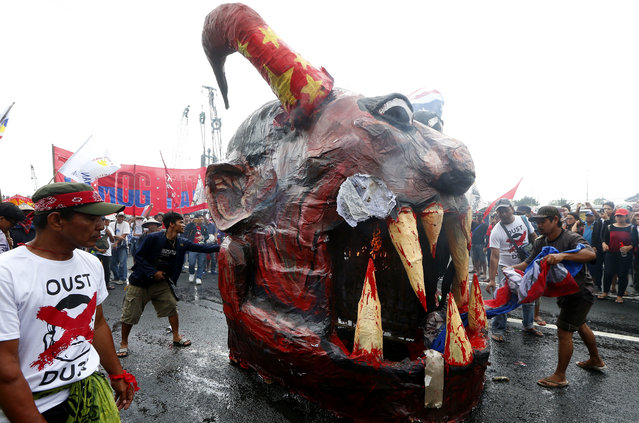 Protesters burn an effigy of President Rodrigo Duterte prior to marching towards the Philippine Congress to coincide with his third State of the Nation Address Monday, July 23, 2018 in suburban Quezon city northeast of Manila, Philippines. The protesters assailed Duterte allegedly for failing in his promises to alleviate poverty as well as his so-called war on drugs which saw the killings of thousands, mostly the poor. (Photo by Bullit Marquez/AP Photo) 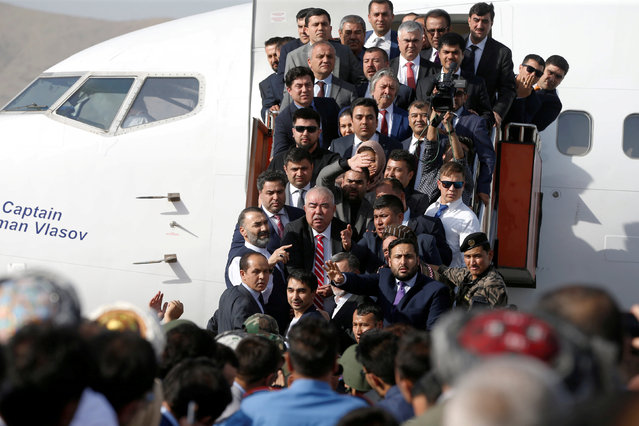 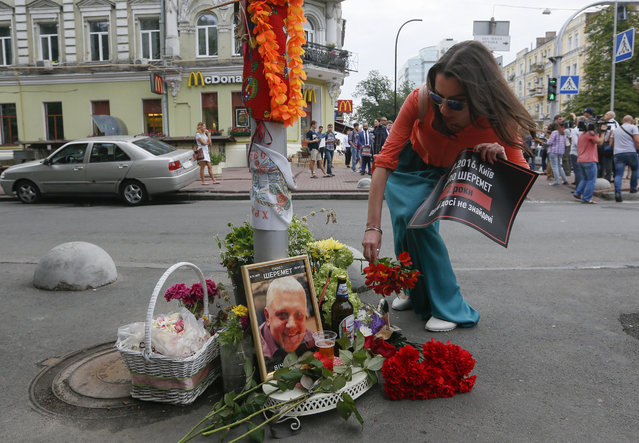 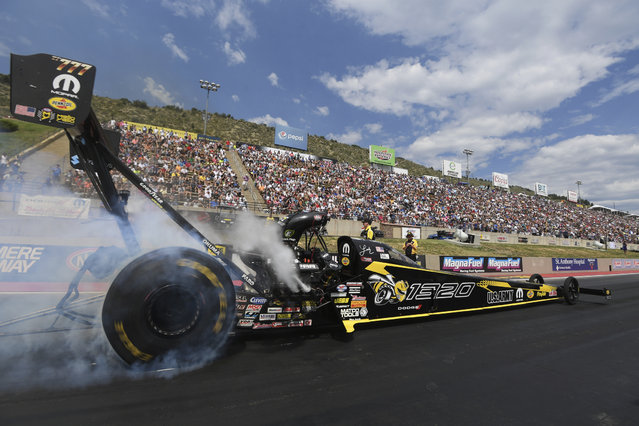 In this photo provided by the NHRA, Leah Pritchett powers to the Top Fuel victory at the annual Dodge Mile-High NHRA Nationals at Bandimere Speedway in Denver, Sunday, July 22, 2018. (Photo by Teresa Long/NHRA via AP Photo) 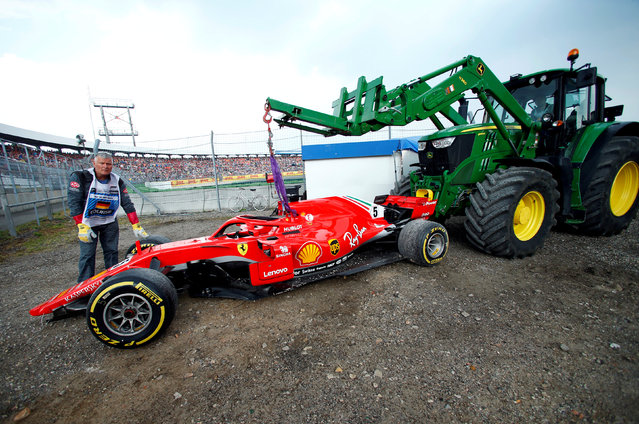 Staff members help as a tractor lifts the car of Ferrari' s German driver Sebastian Vettel during the German Formula One Grand Prix at the Hockenheim racing circuit on July 22, 2018 in Hockenheim, southern Germany. (Photo by Ralph Orlowski/Reuters) 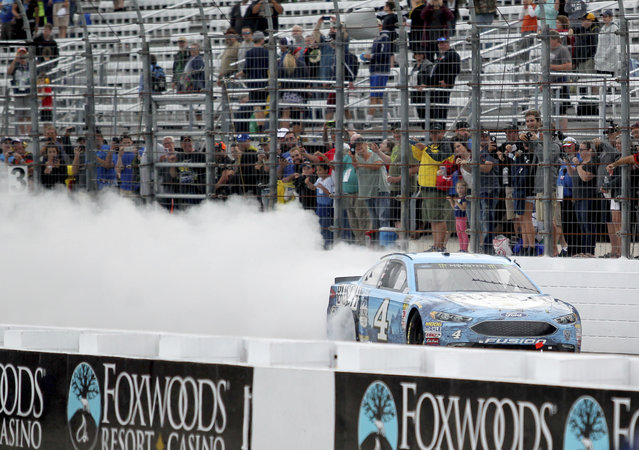 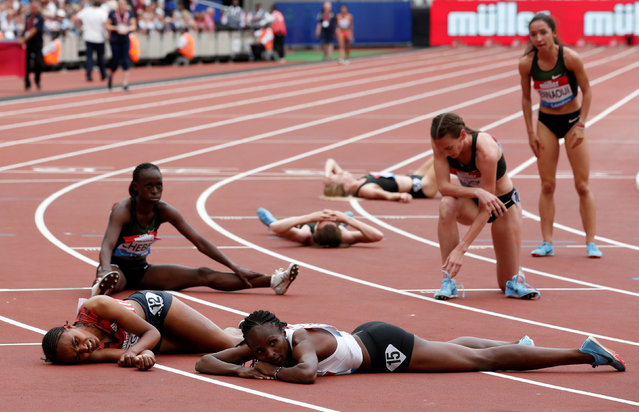 Athletes collapse after finishing the Women' s 1 mile event during the anniversary games at the Queen Elizabeth stadium in London on July 22, 2018. (Photo by David Klein/Reuters) 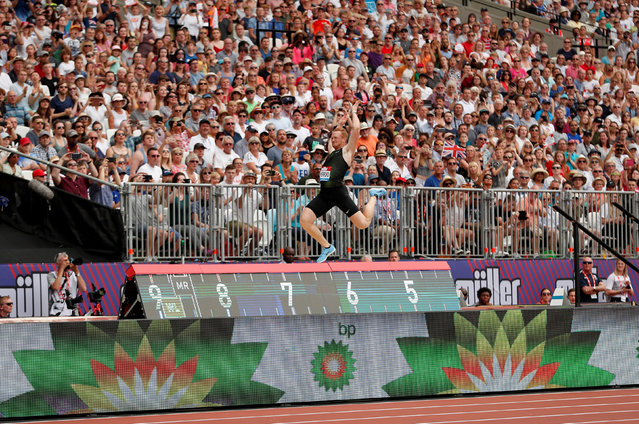 Britain' s Greg Rutherford competes in the Men' s long jump event during the anniversary games at the Queen Elizabeth stadium in London on July 22, 2018. (Photo by Andrew Boyers/Action Images via Reuters) 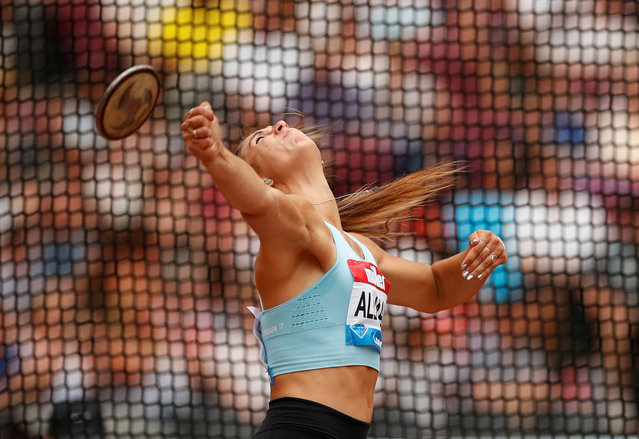 Valarie Allman of the U.S. in action during the Women's Discus Throw during the anniversary games at the Queen Elizabeth stadium in London on July 22, 2018. (Photo by Andrew Boyers/Action Images via Reuters) 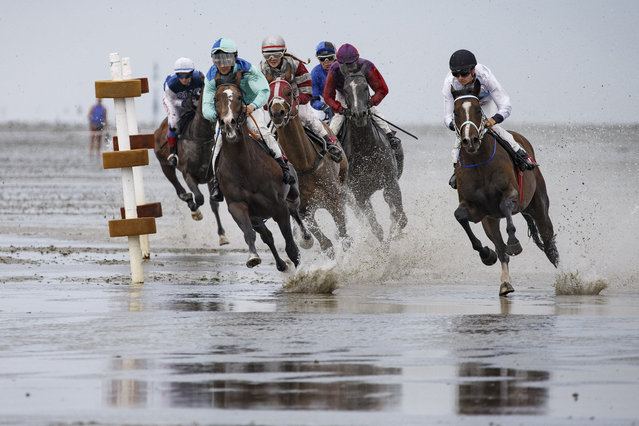 Horses and riders compete in the annual horse buggy races on the mudflats at Duhnen on July 22, 2018 in Cuxhaven, Germany. The races, which in German are known as the Duhner Wattrennen, take place at low tide throughout the day and have been an annual tradition going back to 1902. (Photo by Morris MacMatzen/Getty Images) 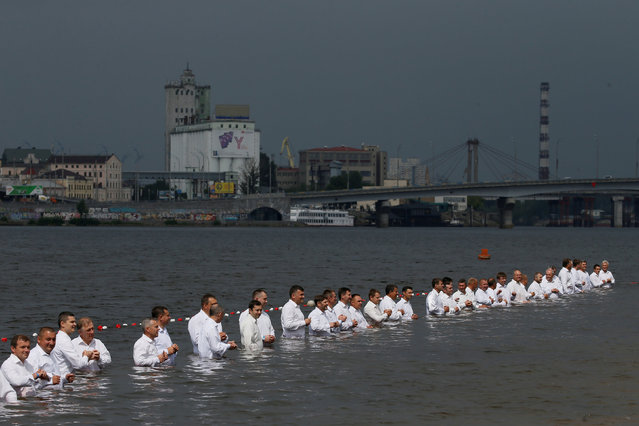 People take part in a mass baptism ceremony organized by Ukrainian Evangelists and Protestants as a part of celebration of the 1030-years anniversary of the Baptism of Kievan Rus, in the waters of the Dnipro River in Kiev, Ukraine July 22, 2018. (Photo by Valentyn Ogirenko/Reuters) 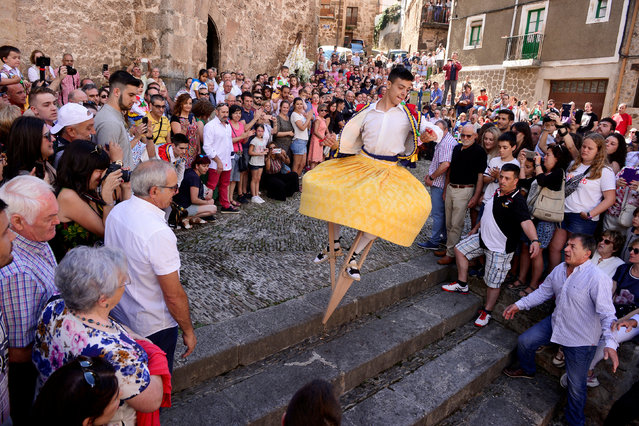 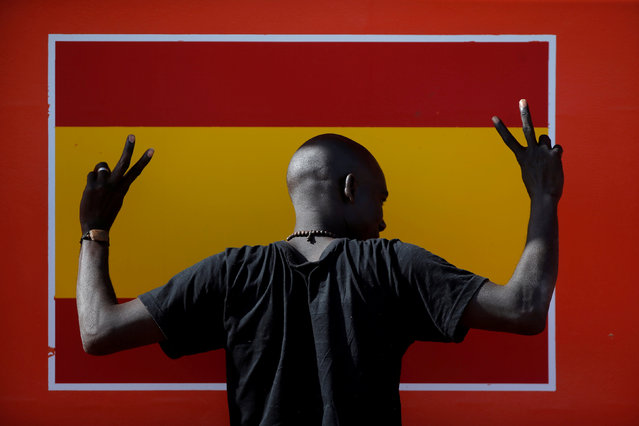 A migrant, intercepted aboard a dinghy off the coast in the Strait of Gibraltar, gestures next to a Spanish flag on a rescue boat after arriving at the port of Algeciras, southern Spain July 22, 2018. (Photo by Jon Nazca/Reuters) 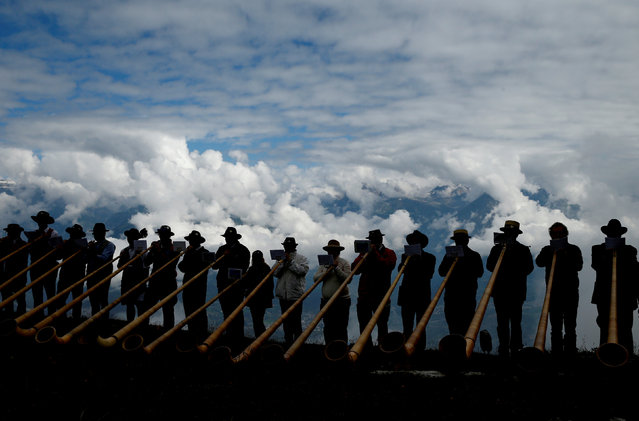 Alphorn blowers perform an ensemble piece on the last day of the Alphorn International Festival on the alp of Tracouet in Nendaz, southern Switzerland, July 22, 2018. (Photo by Denis Balibouse/Reuters) 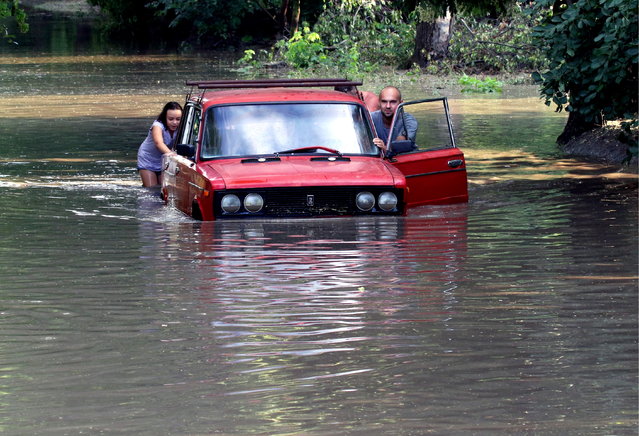 People push a car in a street flooded after a heavy downpour in Crimea on July 18, 2018. (Photo by Alexei Pavlishak/TASS) 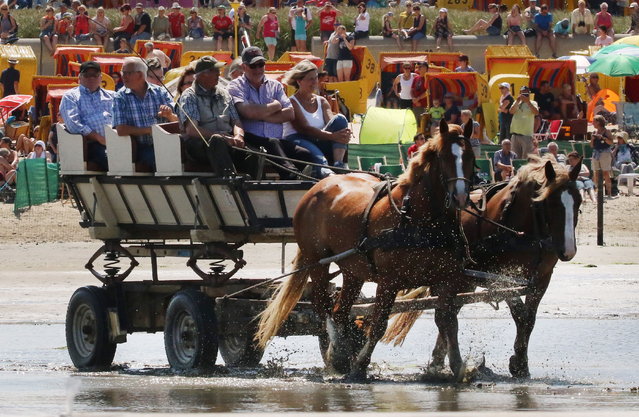 A wadden sea carriages with tourists near Cuxhaven-Duhnen, on their way to the island of Neuwerk, in Cuxhaven, northern Germany, 22 July 2018. Holiday makers at the seaside resorts of the German Bight are experiencing a hot summer weekend. (Photo by Focke Strangmann/EPA/EFE) 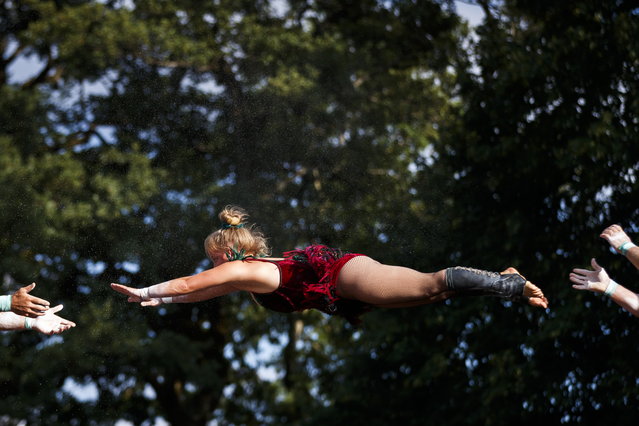 Members of the street performer band “L'Odeur de la Sciure” perform at “La Ruche”, during the 43th edition of the Paleo Festival, in Nyon, Switzerland, 21 July 2018. The open-air music festival runs from 17 to 22 July. (Photo by Valentin Flauraud/EPA/EFE) 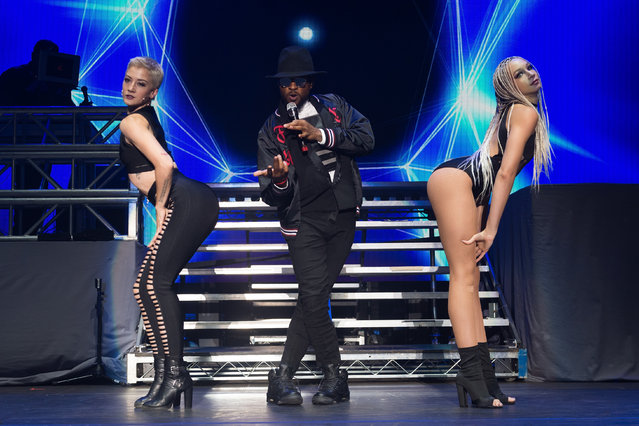 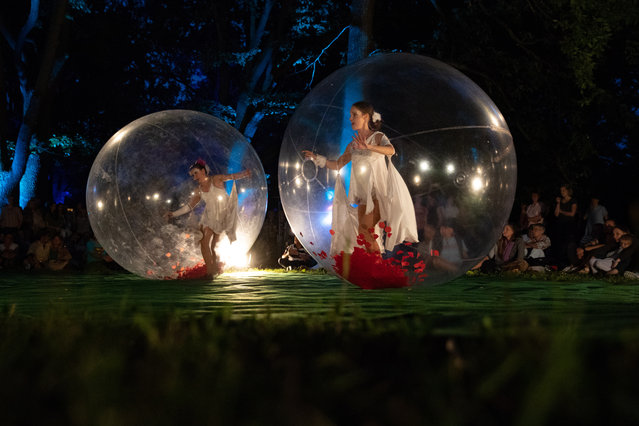 Dancers perform inside of transparent balls during the Botanical Night at Botanical Garden in Berlin, Germany, 20 July 2018. During the Botanical Night a 16 kilometre long path along the flower beds and several themed gardens are illuminated and guide to many attractions. (Photo by Hayoung Jeon/EPA/EFE)
Edit Del
24 Jul 2018 09:29:00, post received 0 comments
Publication archive:
←   →
Popular tags:
All tags
Last searches: