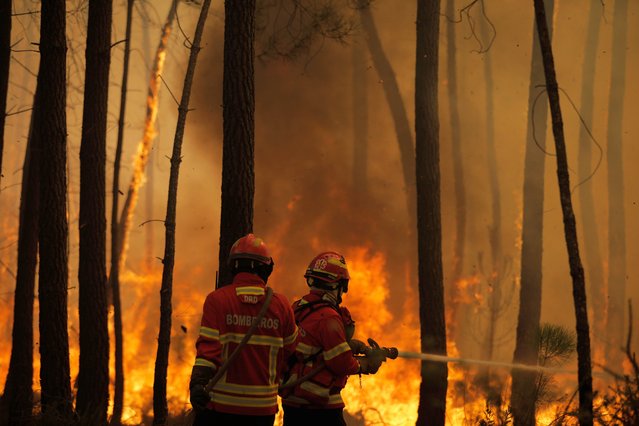 Firemen fight a forest fire in Oleiros, Castelo Branco, centre of Portugal, 26 July 2020. The fire started the previous day in Oleiros and​ is being fought by 873 operational, 268 vehicles and 11 airplane. (Photo by Paulo Cunha/EPA/EFE) 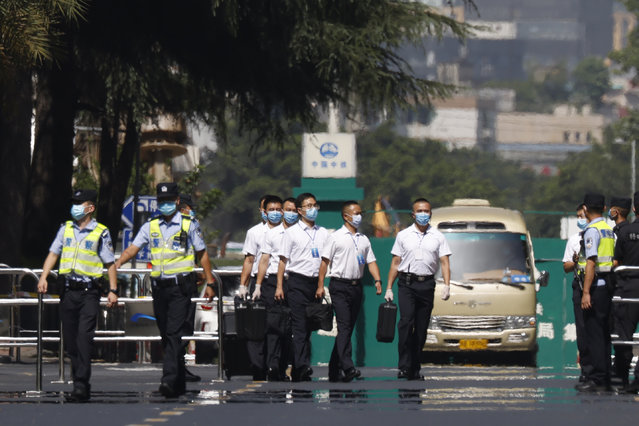 Chinese security personnel walk outside the United States Consulate in Chengdu in southwest China's Sichuan province on Monday, July 27, 2020. China ordered the United States on Friday to close its consulate in the western city of Chengdu, ratcheting up a diplomatic conflict at a time when relations have sunk to their lowest level in decades. (Photo by Ng Han Guan/AP Photo) 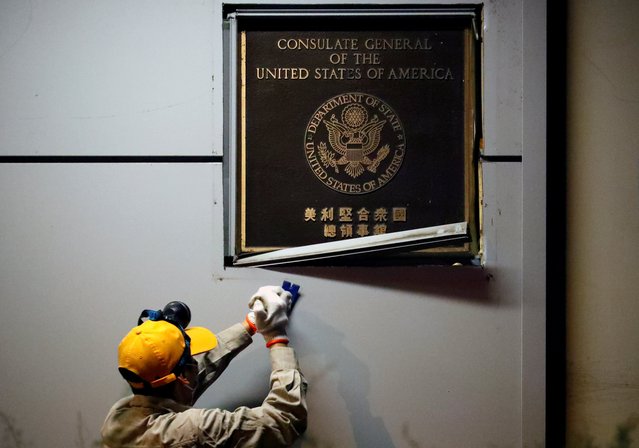 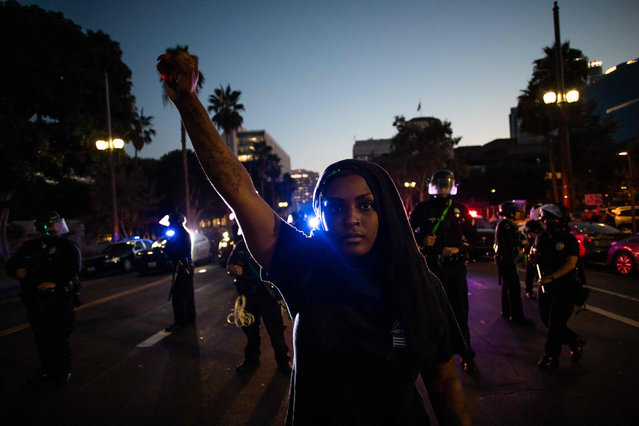 A woman holds up her fist in front of a row of Police officers during a protest demanding justice for George Floyd, Breonna Taylor and also in solidarity with Portland's protests, in Downtown Los Angeles, California, on July 25, 2020. (Photo by Apu Gomes/AFP Photo) 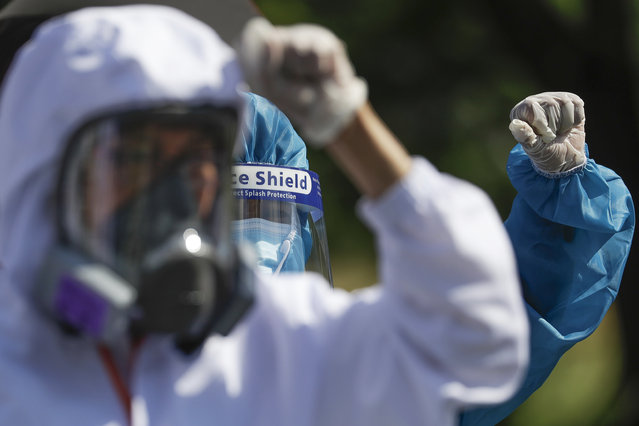 Health workers in protective suits clench fists during a protest against the State of the Nation Address (SONA) by Philippine President Rodrigo Duterte on Monday, July 27, 2020 in Metro Manila, Philippines. Hundreds of protesters marched, staged motorcades and held a rally against a new anti-terror law and other issues Monday in the Philippine capital despite police threats of arrests ahead of the president’s annual state of the nation speech. (Photo by Aaron Favila/AP Photo) 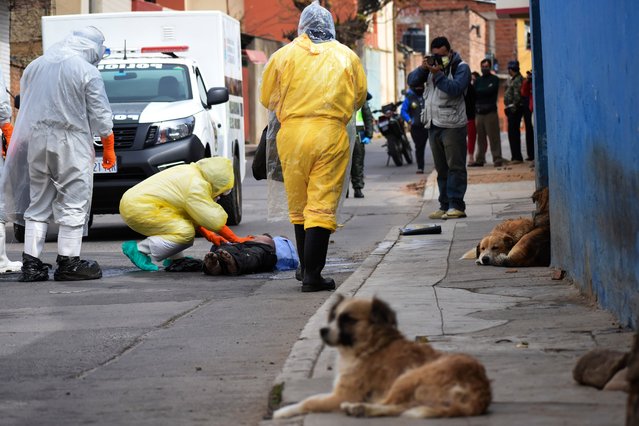 State department health workers recover the body of a street vendor who was found at dawn by his neighbors in the Cerro San Miguel neighborhood of Cochabamba, Bolivia, Saturday, July 25, 2020. As part of a government mandated protocol to curb the spread of the new coronavirus, health officials are being called on to disinfect and take COVID-19 rapid tests from the increasing number of bodies they are called on to collect, regardless on whether they are known to have been infected with the virus. (Photo by Dico Solis/AP Photo) 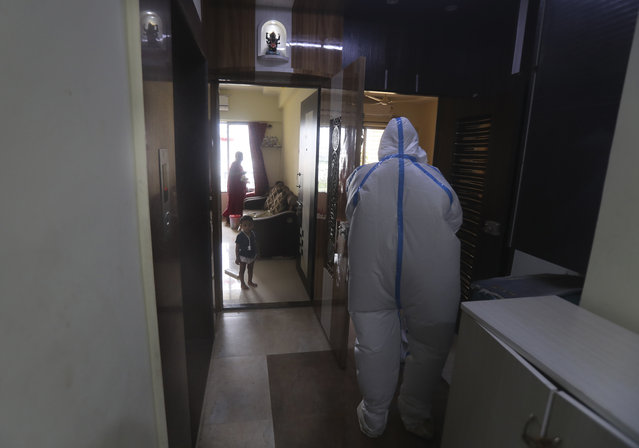 A child looks at a health worker arriving to screen people for COVID-19 symptoms at a residential building in Mumbai, India, Sunday, July 26, 2020. India is the third hardest-hit country by the pandemic in the world after the United States and Brazil. (Photo by Rafiq Maqbool/AP Photo) 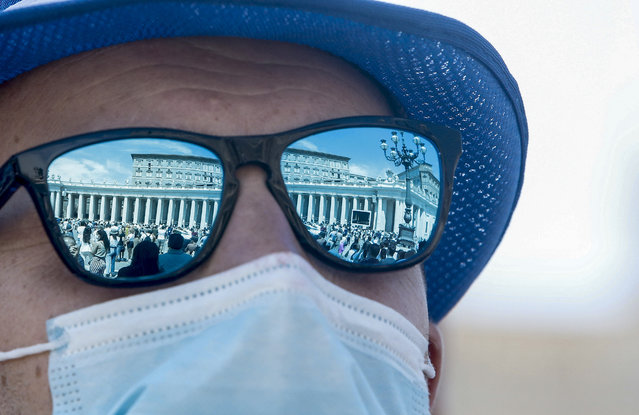 The Vatican Apolstolic Palace is reflected in a man's sunglasses as Pope Francis recites the Angelus noon preyer rom the window of his studio overlooking St. Peter's Square , at the Vatican, Sunday, July 26, 2020. Pope Francis called for the disarmament and clearing of mines in the Donbass area in Ukraine, saying it was essential to the peace process. (Photo by Riccardo De Luca/AP Photo) 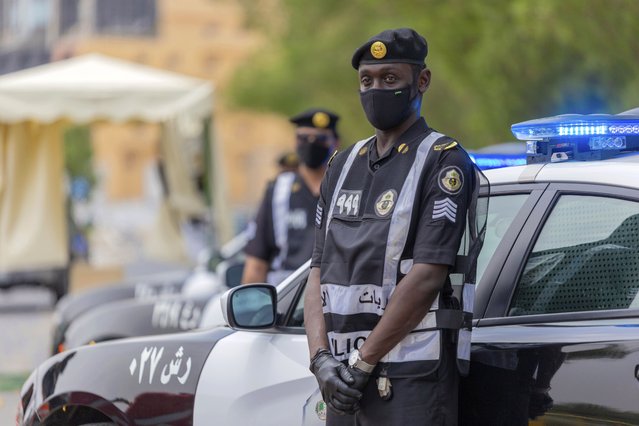 Policemen wearing gloves and face masks to help prevent the spread of the coronavirus, provide security for pilgrims, in Mecca, Saudi Arabia, Sunday, July 26, 2020. Only about 1,000 pilgrims will be allowed to perform the annual hajj pilgrimage that begins later this month due to the virus pandemic. (Photo y Saudi Ministry of Media via AP Photo) 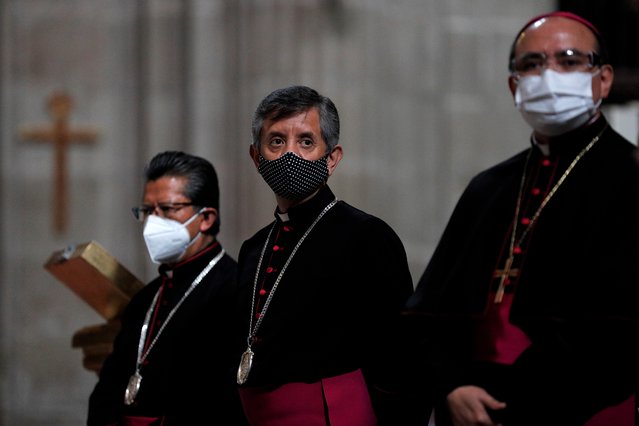 Catholic priests stand inside the Metropolitan Cathedral ahead of the first Mass open to the public amidst the ongoing coronavirus pandemic, in Mexico City, Sunday, July 26, 2020. (Photo by Rebecca Blackwell/AP Photo) 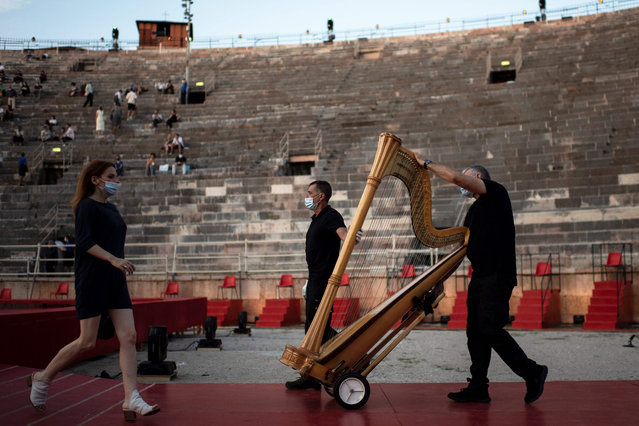 Workers transport a harp on stage during a rehearsal before a concert at the Arena in Verona, northern Italy, on July 25, 2020. This is the first show with new dispositions against the spread of the novel coronavirus (Covid-19) during this season. (Photo by Marco Bertorello/AFP Photo) 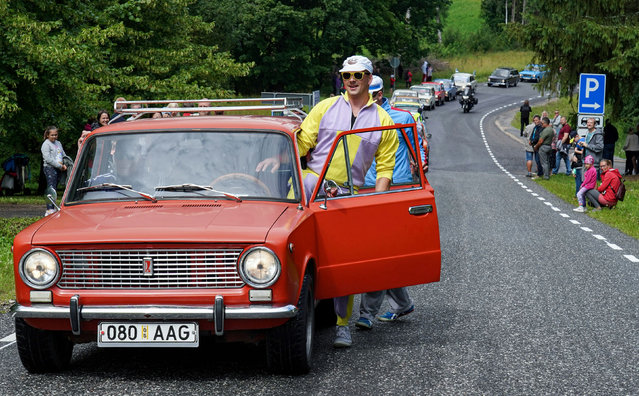 A man gets into a Lada car during a parade for the 50th anniversary of the brand in Varbuse, Estonia on July 25, 2020. (Photo by Janis Laizans/Reuters) 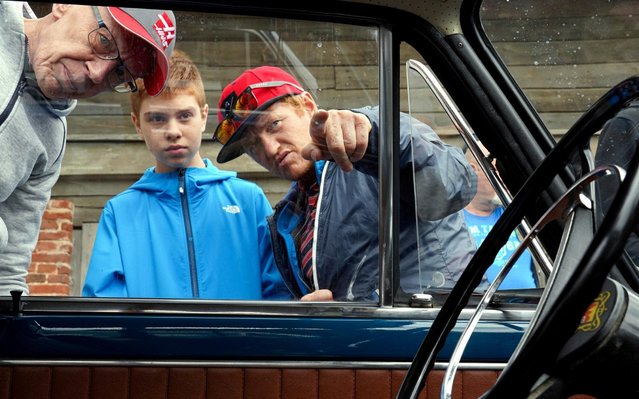 People look inside a Lada car during a parade for the 50th anniversary of the brand in Varbuse, Estonia on July 25, 2020. (Photo by Janis Laizans/Reuters) 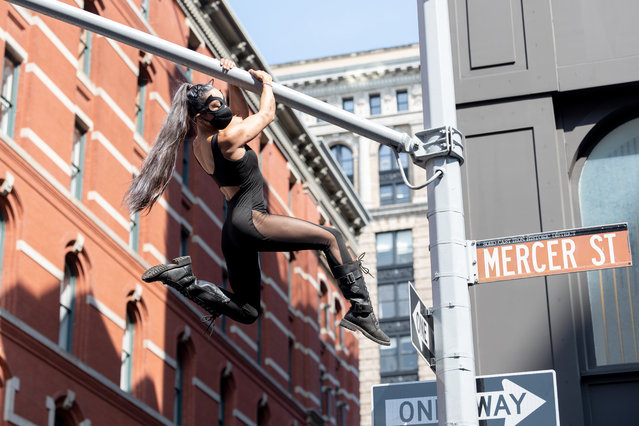