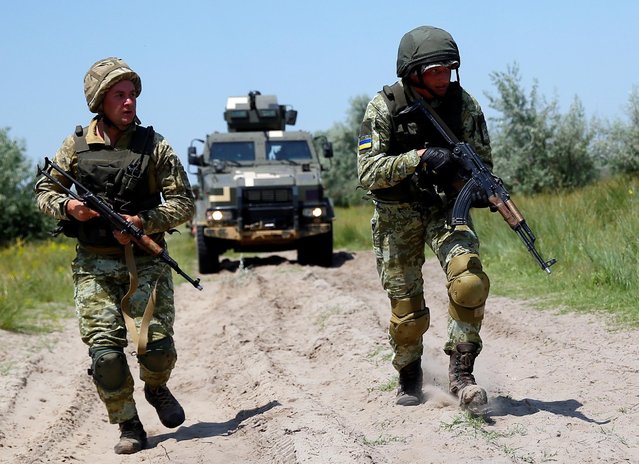 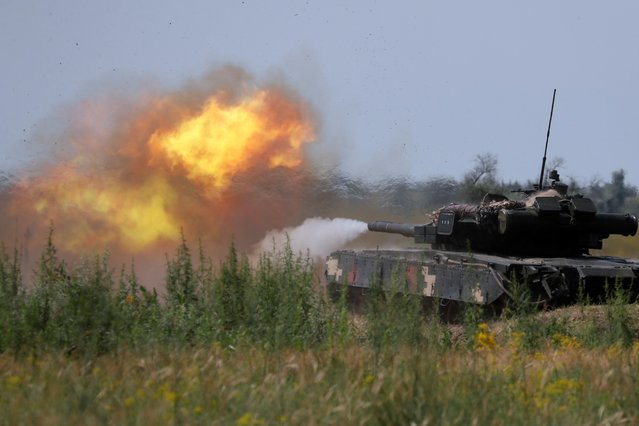 A tank of a Ukrainian marines fires during a military exercises near Kherson, as Ukraine and the United States stage land military exercises involving more than 30 countries as part of multinational Sea Breeze 2021 drills, in southern Ukraine, July 2, 2021. (Photo by Gleb Garanich/Reuters) 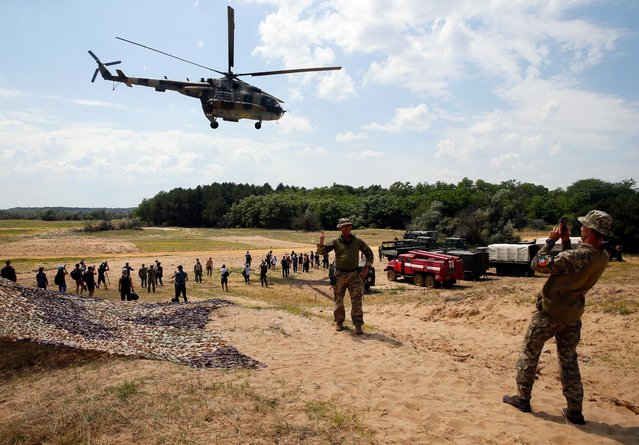 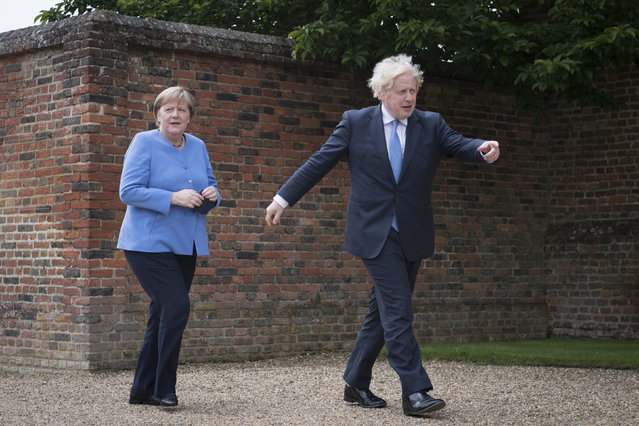 British Prime Minister Boris Johnson shows the way to Chancellor of Germany, Angela Merkel, left, before their bilateral meeting at Chequers, the country house of the Prime Minister of the United Kingdom, in Buckinghamshire, England, Friday July 2, 2021. Johnson is likely to push Angela Merkel to drop her efforts to impose COVID-19 restrictions on British travelers as the German chancellor makes her final visit to Britain before stepping down in the coming months. Johnson will hold talks with Merkel at his country residence on Friday. (Photo by Stefan Rousseau/Pool Photo via AP Photo) 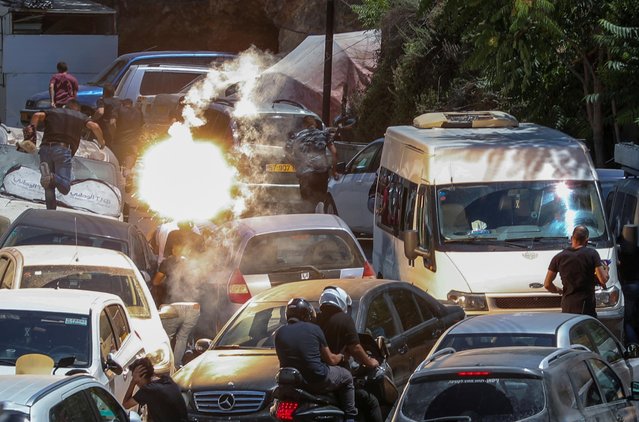 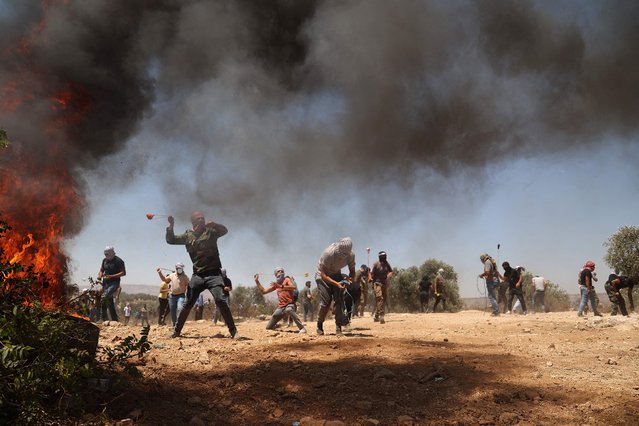 Palestinian protesters use slingshots to throw stones during clashes with Israeli security forces in the town of Beita, near Nablus city in the occupied West Bank, on July 2, 2021, amid ongoing rallies in the Palestinian village protesting the newly-established settler outpost of Eviatar on a nearby hill. Israeli settlers were leaving the wildcat outpost in adherence to an agreement struck with nationalist premier Naftali Bennett's new government, an AFP reporter said. The hilltop area where they have established a settlement lies near Nablus in the northern West Bank, Palestinian territory occupied by Israel since 1967. (Photo by Jaafar Ashtiyeh/AFP Photo) 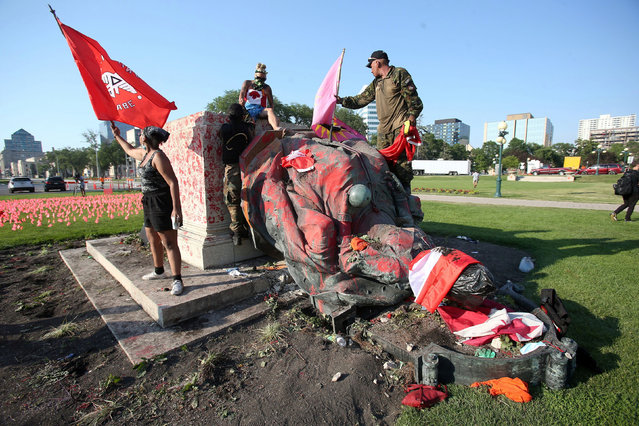 A defaced statue of Queen Victoria lies after being toppled during a rally, following the discovery of the remains of hundreds of children at former indigenous residential schools, outside the provincial legislature on Canada Day in Winnipeg, Manitoba, Canada on July 1, 2021. (Photo by Shannon VanRaes/Reuters) 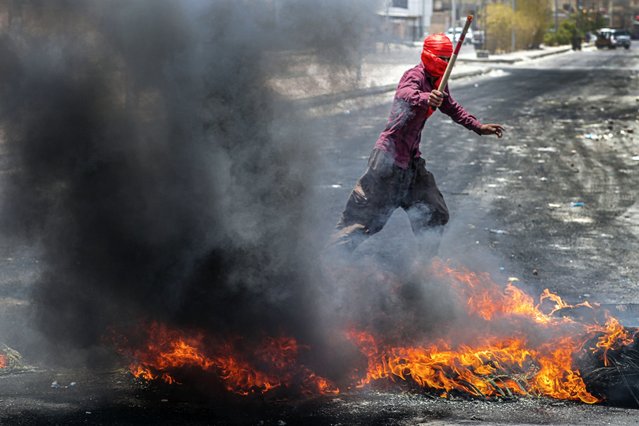 Protesters burn tires to block roads during a demonstration demanding the return of electricity in Basra, southeast of Baghdad, Iraq, Friday, July 2, 2021. A widespread power outage is hitting Iraq as temperatures reach scorching levels, affecting even affluent areas in the capital and stirring concerns of widespread unrest. (Photo by Nabil al-Jurani/AP Photo) 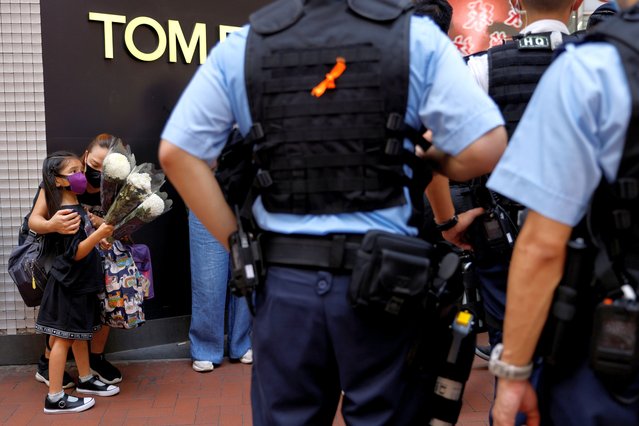 A mother and child holding flowers are stopped and searched by police as they try to pay tribute to a man, who stabbed a policeman then stabbed himself in the chest with the knife and died on the anniversary of the city's return to Chinese rule, at Causeway Bay in Hong Kong, China on July 2, 2021. (Photo by Tyrone Siu/Reuters) 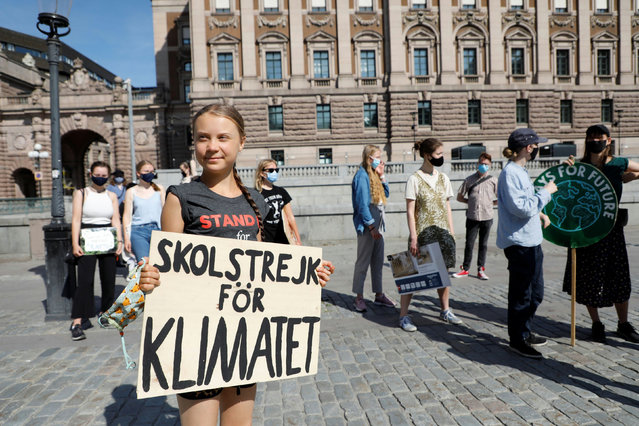 Swedish climate activist Greta Thunberg and other activists gather for a protest against climate change in front of the Swedish parliament building in Stockholm on July 2, 2021. Swedish climate activist Greta Thunberg launched a new broadside on July 1 against "role-playing" by political and economic leaders over the climate crisis, accusing them of using it as a business opportunity. Thunberg, 18, derided wealthy nations' climate commitments as “vastly insufficient” in the face of “more and more extreme weather events, raging all around us”. (Photo by Christine Olsson/TT News Agency/AFP Photo) 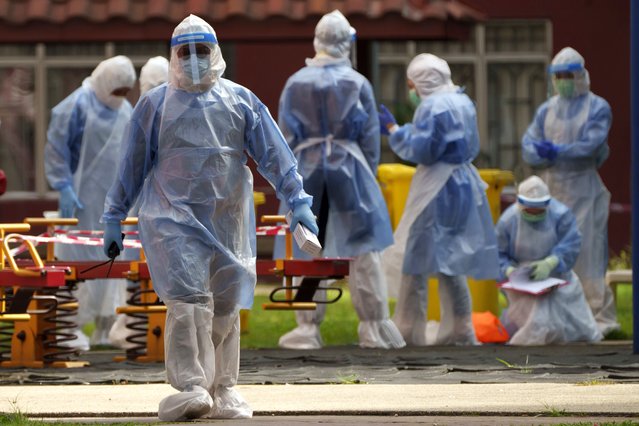 Medical workers wearing gear enter a residential area placed under the enhanced movement control order (EMCO) due to a drastic increase in the number of COVID-19 cases recorded in Sunway, outskirt of Kuala Lumpur, Malaysia, Friday, July 2, 2021. Malaysia starts to further tighten movement curbs and impose a curfew in most areas in its richest state Selangor and parts of Kuala Lumpur, where coronavirus cases remain high despite a national lockdown last month. (Photo by Vincent Thian/AP Photo) 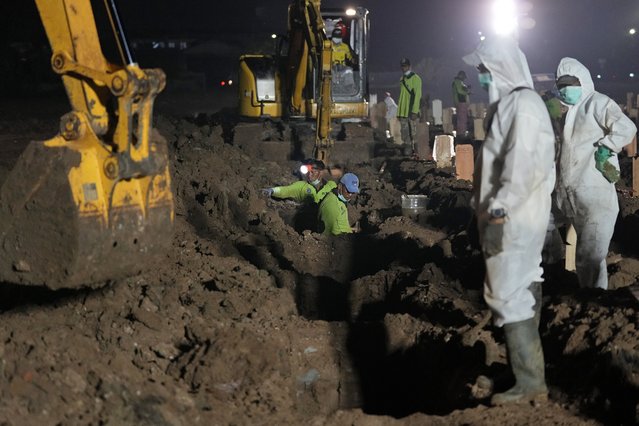 Workers dig new graves at Rorotan Cemetery which is reserved for those who died of COVID-19, in Jakarta, Indonesia, Thursday, July 1, 2021. New land around the capital city continues to be cleared for the dead and gravediggers have to work late shifts following surges in COVID-19 cases fueled by travel during the Eid holiday in May, and the spread of the delta variant of the coronavirus first found in India. (Photo by Dita Alangkara/AP Photo) 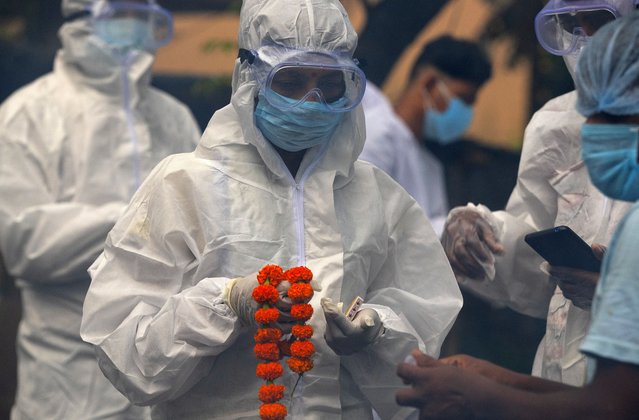 A relative performs final rituals before the cremation of a COVID-19 victim in Gauhati, India, Friday, July 2, 2021. India on Friday crossed the grim milestone of more than 400,000 people lost to the coronavirus, a number that though massive is still thought to be a vast undercount because of a lack of testing and reporting. (Photo by Anupam Nath/AP Photo) 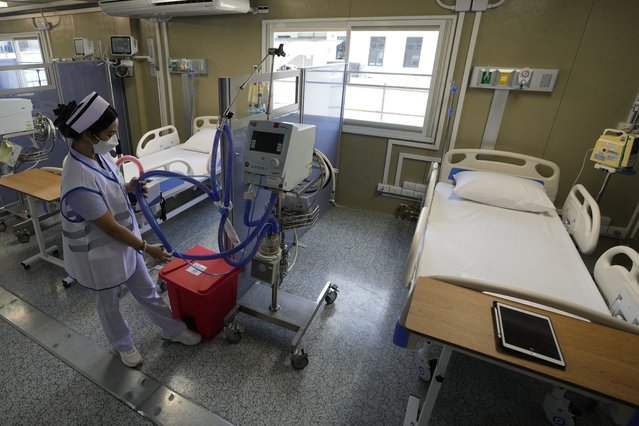 A health worker prepares equipment in a field hospital for COVID-19 patients at the 11th Army Region base in Bangkok, Thailand, Friday, July 2, 2021. As Thailand faces growing numbers of COVID-19 cases and related deaths during a devastating third wave of the coronavirus, there are concerns that it will face a shortage of hospital beds, intensive care units and ventilators for seriously ill patients. (Photo by Sakchai Lalit/AP Photo) 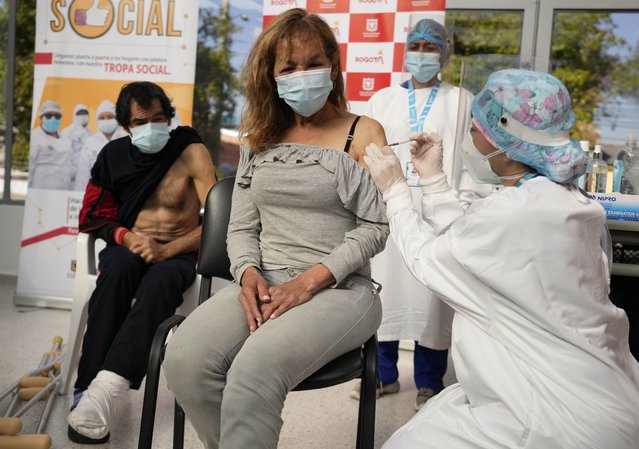 A health worker gives a homeless woman a shot of the Johnson & Johnson COVID-19 vaccine at a municipal homeless shelter in Bogota, Colombia, Friday, July 2, 2021. (Photo by Fernando Vergara/AP Photo) 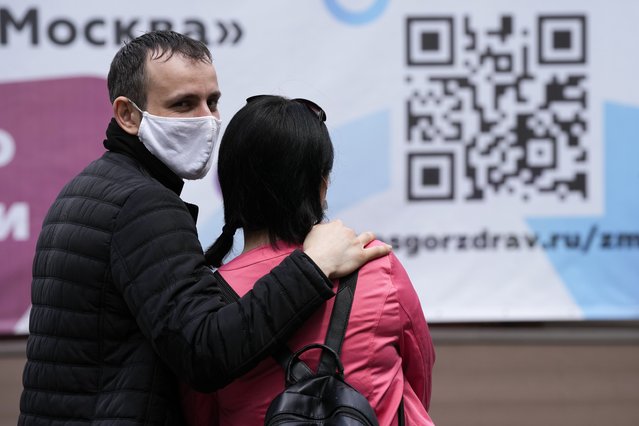 A couple wait in line to receive a coronavirus vaccine at a vaccination center with the sign of a QR code at VDNKh (The Exhibition of Achievements of National Economy) in Moscow, Russia, Friday, July 2, 2021. Russian health authorities on Thursday launched booster coronavirus vaccinations for those who had been immunized more than six months ago, as the country faces a surge in new infections and deaths. (Photo by Alexander Zemlianichenko/AP Photo) 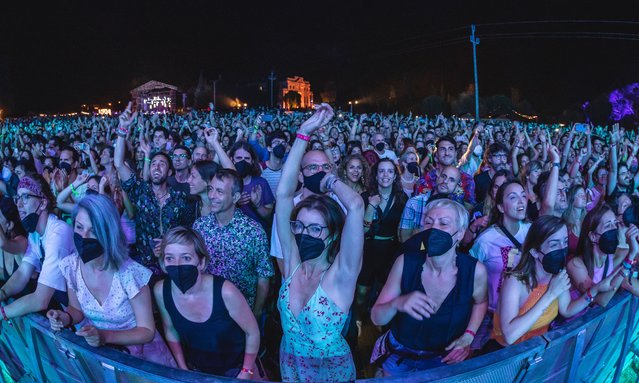 View of the crowd during the Vida Festival on July 01, 2021 in Vilanova i la Geltru, Spain. This is the first festival held in Spain following the Covid-19 pandemic without social distancing rules, but face masks will be mandatory, and all attendees, organisers and artists will have to pass a nasal antigen test (less invasive) in order to access the festival site each day. Negative tests will be allowed to access the festival and positive tests will be attended by the organisation's health care service and their tickets will be refunded. (Photo by Xavi Torrent/Getty Images)
Edit Del
03 Jul 2021 10:36:00, post received 0 comments
Publication archive:
←   →
Popular tags:
All tags
Last searches: